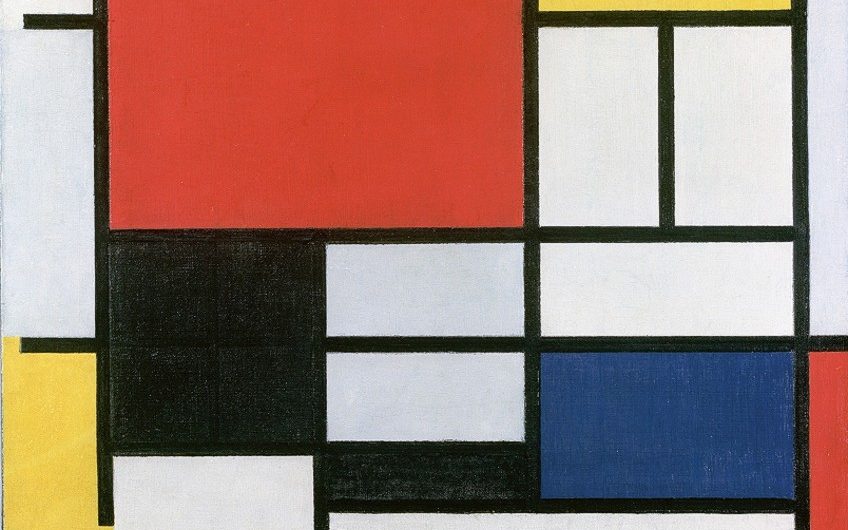 What is shape in art? This is the question we will explore and discuss in the article below. The importance of shape in art is manifold, and as an element of art, it is part of what provides the fundamental structure to visual compositions.

What Is Shape in Art?

Understanding that shape is an element of art and how it works together with the other art principles provides a broader contextual framework around what it is. However, let us look more closely at the question of what shape in art is, which includes the main types of shapes to be aware of too.

Shape in art can be better understood when compared with its counterpart, which is form, one of the other art elements. Shape is based on two dimensions, namely, it has width and length. Form is three-dimensional, namely, it has a width, length, and height.

Shapes are flat in appearance due to their two-dimensionality, and they are usually described as “enclosed” lines. For example, a square is made of four lines and a circle is an enclosed curved line, and so forth.

There are also a variety of shapes that can become forms if they are created as three-dimensional, which can be done by adding other art elements like color or value to create shading or tones to give the idea of three-dimensions.

The more common shapes include circles, squares, rectangles, and triangles, which are shapes we all know and see daily. When these shapes are created as three-dimensional, they will become spheres, cubes, cuboids, or cones. However, it is important to note that there are multitudes of shapes and forms. We will list more shapes in the article below.

In the visual arts, there are art elements and art principles, all of which act as guidelines or tools when creating artworks as well as understanding or analyzing artworks. Shape is one element of art; the other art elements are form, space, line, texture, color, and value.

There are also several art principles, namely, balance, unity, harmony, variety, proportion, scale, rhythm, movement, pattern, and repetition, among others. These are also termed the “principles of design” or “organizing principles”. The art principles organize how art elements are applied, for example, if there are several similar shapes arranged in patterns in a painting which, if repeated, can give the composition an overall unity and balance.

Shapes As Building Blocks in Art

Shapes are often described in terms of being building blocks; we can start an artwork by first drawing the main shapes that will be needed and expanded on and conversely, we can analyze artwork by determining the dominant shapes that compose the subject matter. It is important to become familiar with how shapes give shape to the objects and environment around us.

The Relationship between Shape and Space

An example that is sometimes utilized to illustrate positive and negative shapes in art is from the Fauvist Henri Matisse’s paper cut out “Icarus” (1947), which was Plate VIII from his publication titled “Jazz” (1947).

The Types of Shape in Art

There are two common types of shapes in art, and these are widely referred to as either organic or geometric. Within these types, there are numerous possibilities to how shapes can be applied, which can range from artistic modalities like paintings, drawings, sculptures, architecture, and others.

Below, we will discuss these main types and provide examples of shape in art that relates to each one.

Organic shapes are often referred to as other terms like “free form”, “irregular”, “asymmetrical”, and “biomorphic” or “natural”. These are shapes created with a free hand, so to say, and often echo shapes that we see in the natural environment like fauna and flora. Characteristics of natural shapes often include curves and more fluidity to their edges and outlines, for example, think of the curved edges of a flower, the different edges of a rock, or the soft and seemingly amorphous cloud in the sky.

However, it is important to note that organic shapes can also appear angular, but without the precision that they would have when it is more measured, which would fall under geometric shapes that we will discuss further below.

Some of the most famous artists who portrayed organic shapes include Joan Miró and Wassily Kandinsky, however, there are many more artists we encourage you to explore. Examples of shape in art from Joan Miró, who was known for his biomorphic shapes, include Person Throwing a Stone at a Bird (1926), which depicts a figuration to the right that looks like a large foot and a small head with one eye. 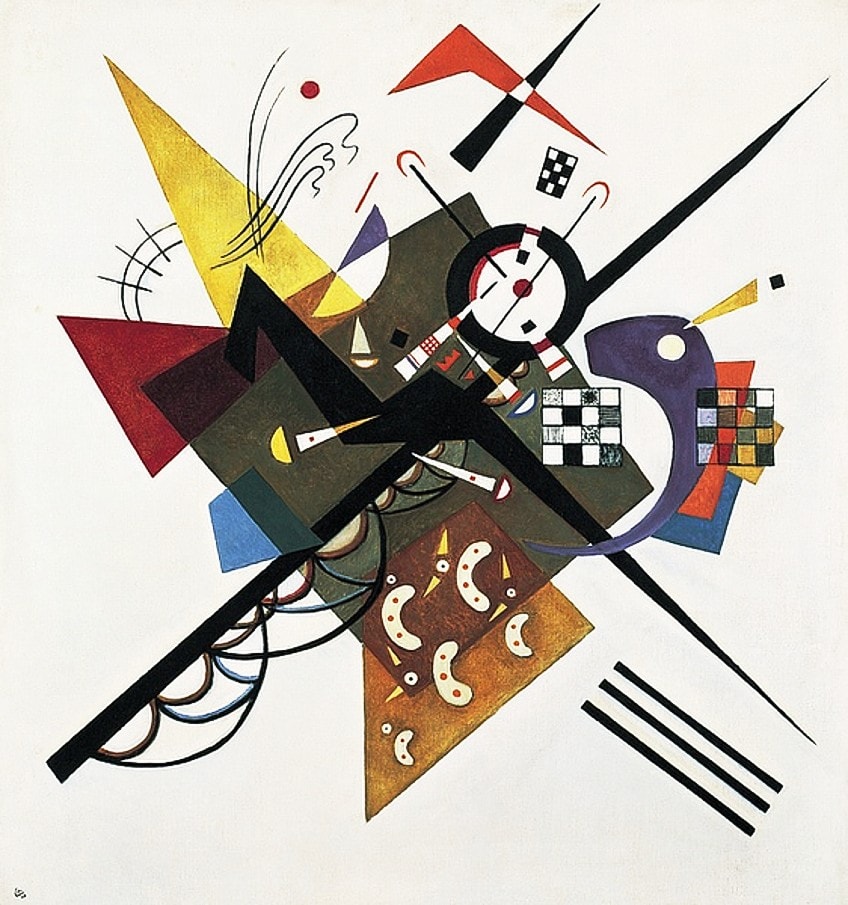 This is an example of organic shape evident by the natural curvature of the figure, however, it is contrasted with the straight line dissecting it. There is another figure to the left, which appears more geometric in its linearity – it is mostly made of a line and a semi-circle – although it has some organic shape above its circular head as well as a crescent shape near its tail.

If we look at Wassily Kandinsky, some of his artworks appear like splashes of shapes on a canvas, for example On White II (1923) depicts triangular, square, circular, and linear shapes, but also several organic – more curved – shapes like the five semi-circular shapes that seemingly resemble cashew nuts near the bottom of the composition.

There are also organic shapes in sculpture, for example, the famous shape art of Jean Arp, who was also known as Hans, created what is referred to as “biomorphic” sculptures. 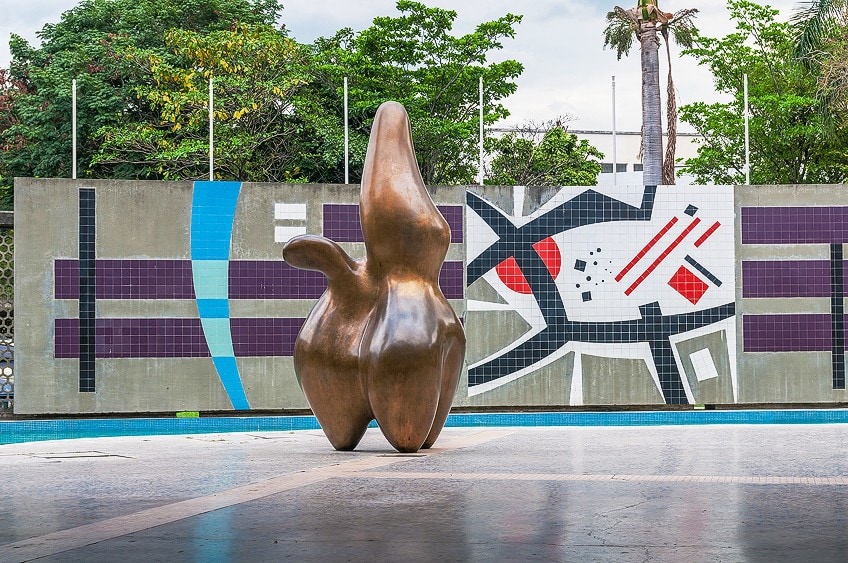 Cloud Shepherd (1953) by Jean Arp, located at the University City of Caracas in Caracas, Venezuela; Wilfredor, CC0, via Wikimedia Commons

For example, Ptolemy (1953), which is made from limestone, depicts two almost intertwining circular shapes. Another example includes Arp’s bronze polished sculpture titled Demeter (1960), which resembles the natural curves we would see in the human form.

Shapes also occupy three-dimensional space, as seen in Alexander Calder’s so-called “mobiles”, which were attached from above and floated in their suspension.

The American sculptor hung various cut-out sheet metal shapes on wires, for example, Black, White, and Ten Red (1957). Although his shapes varied in size and color, he has been described as utilizing more organic shapes that resembled foliage, like leaves.  Another example includes his stabile – this is merely a structure that stands with shapes hanging from a wire – Southern Cross (1963), which is larger than life-size, but also with shapes that are not geometrically correct.

Geometric shapes are typically measured by mathematical tools however, you do not need to be a mathematician to understand them. These shapes are often associated with terms like “man-made” and “predictable”; they are planned and measured. Below is a list of more shapes:

There are numerous examples of shape in art of how geometric shapes become the subject matter, especially in famous shape art from artists like Piet Mondrian, Kazimir Malevich, and Frank Stella. These artists sought to create art beyond real-life representation and with it, they questioned the real meaning of art.

The Dutch painter Piet Mondrian was famous for his art style called Neo-Plasticism, which consisted of arrangements of geometric shapes.

However, it is also an illustration of how he utilized other art elements like lines to create shapes, in other words, shapes like squares or rectangles are only lines that connect to each other. Piet Mondrian’s Composition with Red, Yellow, and Blue (1927) depicts black vertical and horizontal lines, which intersect each other creating square and rectangular shapes. His later Broadway Boogie Woogie (1942 to 1943) does not depict the characteristic black lines from earlier paintings, instead, here we see more colors – yellow, red, blue, gray, and white – in squares and rectangles. 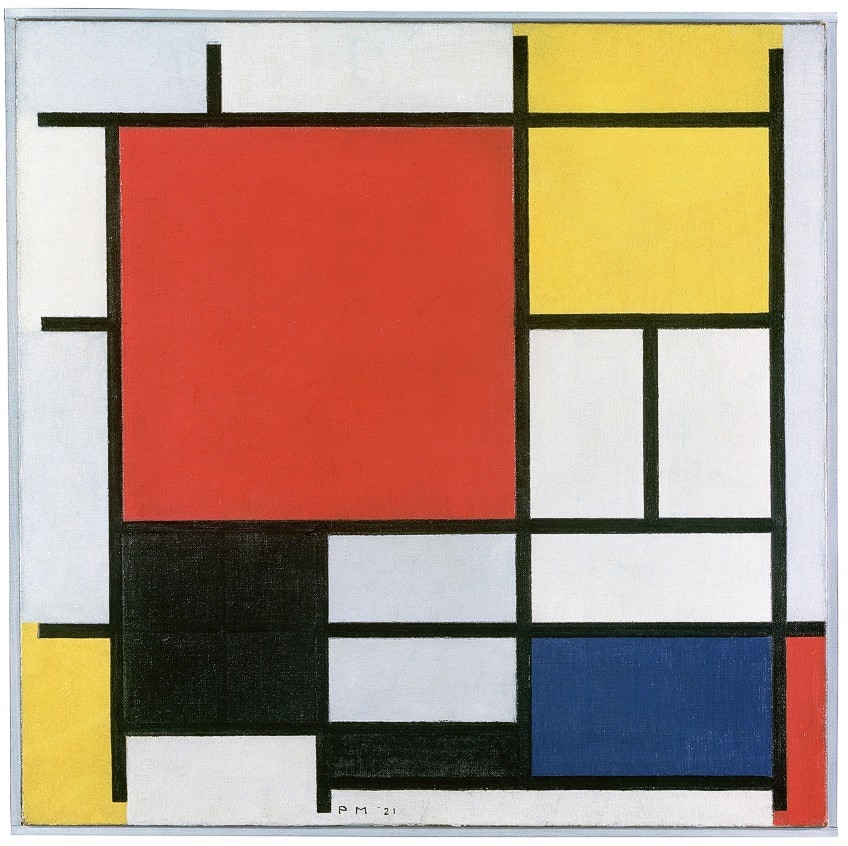 The Ukraine-born Kazimir Malevich was famously known for his work in the art style called Suprematism, which gave the most basic shapes like squares the prominence of new art, without representational meaning so to say.

His Black Square (1915) has become a cornerstone example of his ideologies, as we see in many of his other paintings like Suprematist Composition: White on White (1918), which depicts a white square on a white background.

Reportedly, this composition evokes ideas of “transcendence” and “floating” in the air. 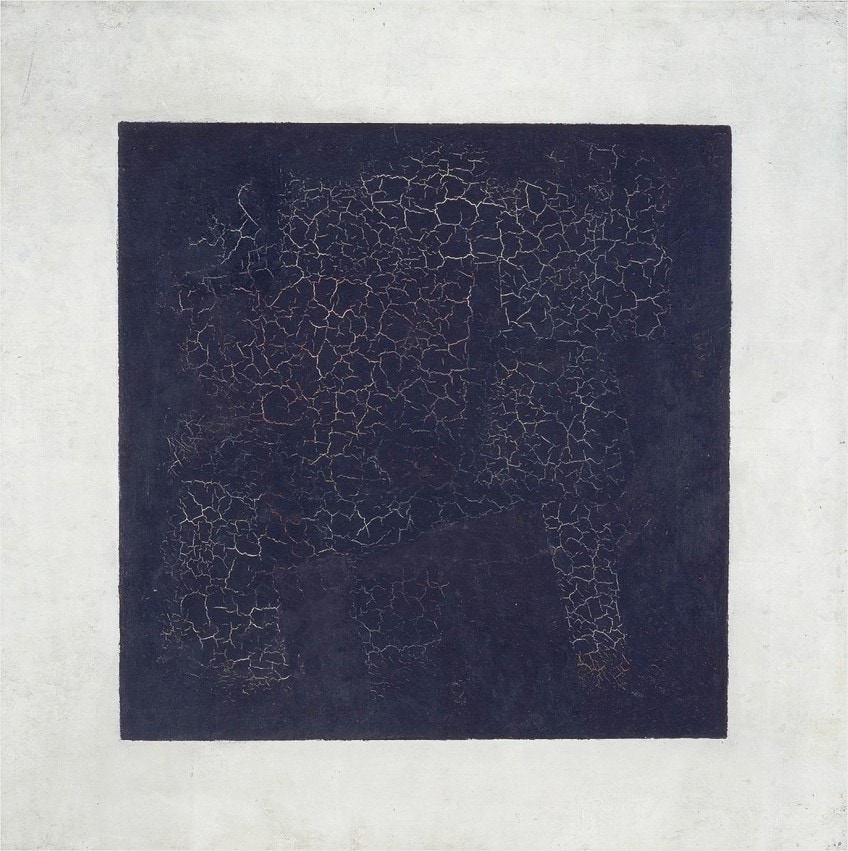 Frank Stella is an American artist , who is now 86 years old and is known for his Minimalist artworks marrying the geometry of shapes with the non-representational style of art. Some of his well-known artworks include the enamel painting The Marriage of Reason and Squalor, II (1959), which is from his Black Paintings (c. 1958 to 1960) series.

This is composed of thick black lines with thin white lines in between them – the white lines are from the white canvas underneath the black paint – creating and resulting in the patterned rectangular shapes, which are also described as “rectilinear”.  Jill (1959) is another rendering from Stella’s Black Paintings, however here we see diamond shapes emerge from the black lines.

We would be remiss not to mention the Cubism art movement from the early 1900s with pioneering artists like Pablo Picasso.

Cubism is best-defined terms like “fragmented” or “fractured” and the subject matter was depicted in revolutionary new ways, in which two and three dimensions shared the same pictorial space. The ground-breaking Les Demoiselles d’Avignon (1907) by Pablo Picasso broke the rules of traditional art where three-dimensional forms ruled the pictorial space to render real life. Instead, Picasso broke his human forms and their background into fragmented and seemingly shattered shapes.

In the article, we explored shape in art and what it is as one of the elements of art. It is closely related to other art elements like line and form. There are also different types of shapes, namely organic and geometric, which we explored in more depth through various examples of shapes in art history. The importance of shape in art can often be overlooked. Still, it is nonetheless a significant and fundamental part of how artworks take shape, not only through the creation process like drawing or sculpting but also through formal analysis.

Take a look at our shape art webstory here!

What Is Shape in Art?

Shape is one of the elements of art and it is commonly described as an enclosed line. It is two-dimensional, having a width and length. Shapes can be anything from triangles, circles, or squares, among many others.

What Are the Types of Shapes in Art?

What Are the Elements of Art?

The elements of art are formal tools that artists and art historians utilize to create visual compositions. These comprise shape, form, line, texture, color, value, and space. They work alongside the principles of art, which are known as the so-called principles of organization. In other words, they can act as organizing tools for how the art elements are applied.

The main principles of art are namely, unity, balance, harmony, rhythm, movement, pattern, repetition, proportion, scale, variety, and emphasis.  These are utilized with the elements of art to create formal structure and nuance to any artwork so that it is better visually understood.