Value in Art – Understanding Value as an Element of Art 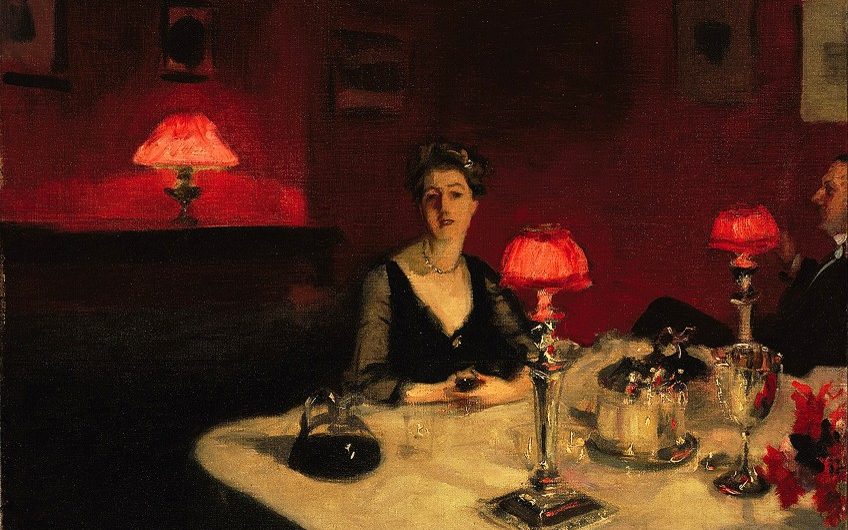 Value in art, which is also an art element, is a fundamental tool for artists when they want to create a visually appealing, harmonious, or striking and contrasting composition. This article will discuss what value is as well as why it is for artists and art historians alike.

The Elements of Art Basics

Value in art is an element of art. There are seven common elements of art in the visual arts, which act as formal tools for artists, and art historians, to produce and analyze artworks. To understand more about how value works in art, let us provide a brief overview of the other art elements.

These can all be utilized in conjunction or isolated to create a wide range of artworks from anything from naturalistic to abstract. The art elements do not only apply to paintings, but to any medium like sketching/drawing, sculpting, graphic designing, interior decorating, architectural spaces, and structures, or even drawing in the sand with your toe.

The commonly referred to art principles include unity, harmony, variety, balance, proportion, rhythm, movement, repetition, pattern, and emphasis. They give structure to how the art elements are applied or used.

For example, a painting with a complementary or analogous color scheme will appear balanced and harmonious. If colors are applied haphazardly the artwork might appear pointless or visually unappealing. However, if achieving variety in an artwork is a guiding principle, colors can be applied in various contrasts.

Another example includes using horizontal lines to convey the idea of movement. Lines can also be applied in patterns that provide a rhythm. In other words, the art principles here determine how the art elements will be used.

What Is Value in Art?

Value in art is closely linked to color, forming part of one of the characteristics of how color can be applied in artworks. Before we go further into value as an element of art, let us provide more context on how it relates to color.

We can see colors applied in a myriad of ways and effects in artworks, from faint, dull, bright, blurry, sharp, textured, contrasted, bold, naturalistic, and abstract, making us feel joyful, sad, melancholy, scary, and the list goes on. What determines these different color effects?

There are several important parts and concepts to be aware of about how color can be used in art.

These include the degrees of saturation/intensity, which is about how “bright” or “dull” a color is; color temperature, which includes how cool or warm a color appears as well as the mood created; color tones, tints, and shades, which is when gray, white, and black is added to a color, and color schemes that incorporate the primary, secondary, and tertiary colors. 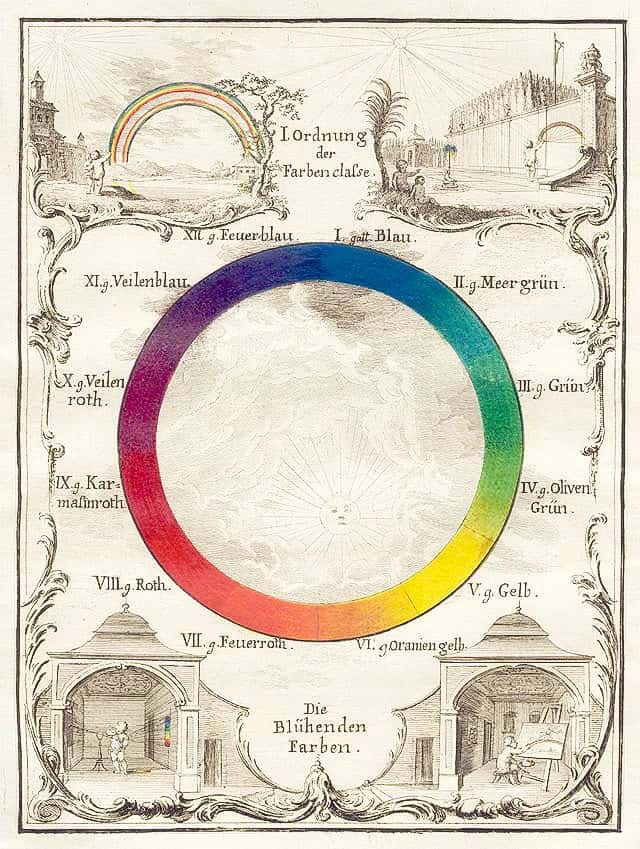 Furthermore, there is a science to color. Briefly, color is a form of light waves that reach our eyes, which has specific photoreceptors in them that allow us to see the spectrum of “visible light” as it is often referred to.

This spectrum of light consists of red, orange, yellow, green, blue, indigo, and violet. Some colors are also either absorbed or reflected.

Value as an Element of Art

However, this is not quite the same as value in art, although the two concepts seem similar. Color saturation is commonly described in terms of the “pureness” of a color and if it has been mixed with neutral colors like white or black, which will make it appear “muted” or fainter than in its original hue.

For a better understanding of how value works in art, many art sources suggest imagining a grayscale or a gradient of colors that progress from lightest to darkest or darkest to lightest. 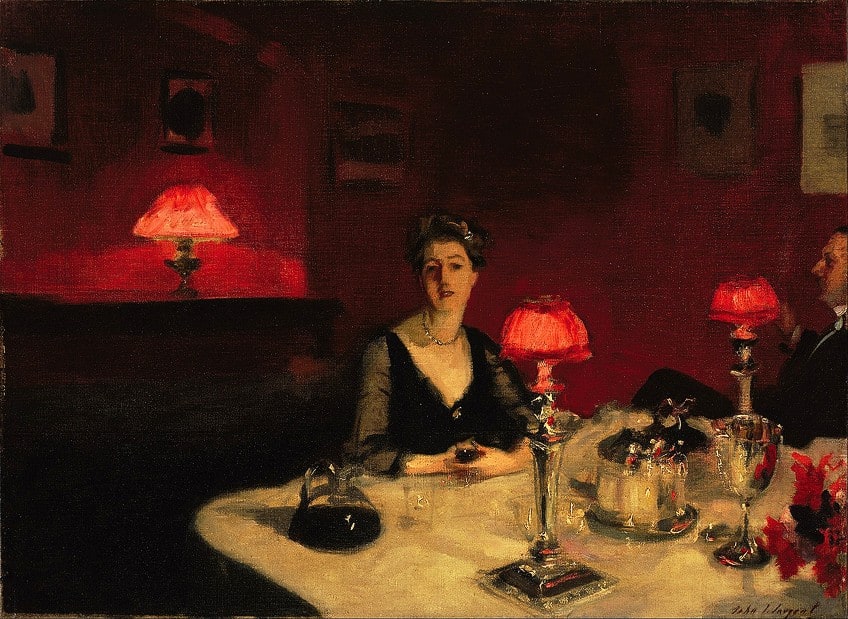 On the grayscale, you will notice the color gray with white and black at each opposite end. These are the different gradations from darkest to lightest or lightest to darkest. Value is also affected when a color has been mixed with white which is called a “tint”, and black which is called a “shade”. On the grayscale, the lightest, or whitest, tints are termed “high-key” color ranges and the darkest, or black, are termed “low-key” color ranges. The grays in between are termed “mid-range” or “middle-key”.

An example of the low-key value in art includes the often referred-to “A Dinner Table at Night” (1884) by John Singer Sargent.

This composition depicts a room with two people sitting at a table. The room is dark with only three lit lamps with reddish lampshades providing the light. The walls are also in a red shade and, together with the lamps, create a cozy, warm ambiance. 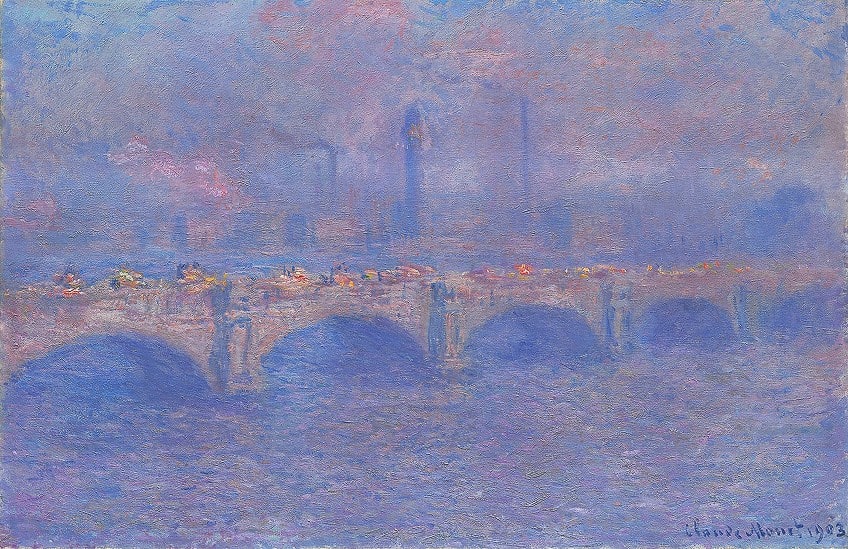 Furthermore, in this composition by Sargent, there are various whitish and lighter, on a high-key value range, areas like the tablecloth and items on the table. These contrast with the deep dark areas especially the shadows in the background, the black on the two figures’ clothes, and the dark, almost black port in the decanter on the table.

High-key value in art is illustrated by some of the paintings of Impressionists like Claude Monet, who is also often referred to.

An example includes his Waterloo Bridge, Sunlight Effect (1903). This is one of the versions from his Waterloo Bridge Series, which he painted from around 1899/1900 to 1904. Monet depicted the Waterloo Bridge in different conditions, notably in the fog. He utilized light colors to convey light and atmospheric effects. Some of the colors are described as” soft” and “pale”, which include blues, purples, and pinks, among others like yellows. 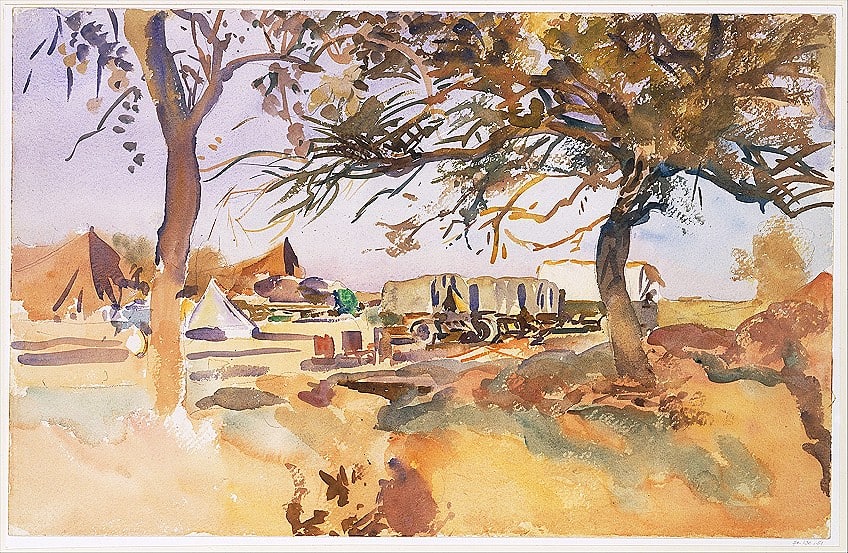 Another important point to remember about utilizing value and the types of “keys” as some describe them is to be aware of their placement in a painting and the purpose of having a high, low, or middle key. If there is too much or too little of a high or low-key visual composition, it could create an unbalanced composition.

A painting that has a dominance of middle-key value can also appear more balanced and harmonious in its color scheme.

An example of a painting that appears to be more middle key is John Singer Sargent’s watercolor and graphite Military Camp (1918). Here, there are no distinct dark areas, only in the shadows of the trees and coaches.

What Is the Purpose of Value in Art?

Value becomes an important element in art, adding a different kind of value to any type of artwork. It creates various effects like highlights and shading, which provide more depth and three-dimensionality to artworks like paintings or drawings.

Some of the best value in art examples that illustrate how it adds highlights and shadows to a visual composition can be seen in Albrecht Dürer’s drawings and engravings.

Examples include the renowned engraving of The Four Horsemen of the Apocalypse (1498), Adam and Eve (1504), and Saint Jerome in His Study (1514). In each of these engravings, we see Dürer’s great skill in creating tonal contrasts, light and dark areas, that give the composition life. For example, in The Four Horsemen of the Apocalypse, the background appears darker from the lines engraved to denote a foreboding background with the horsemen coming into the scene fast and strong. 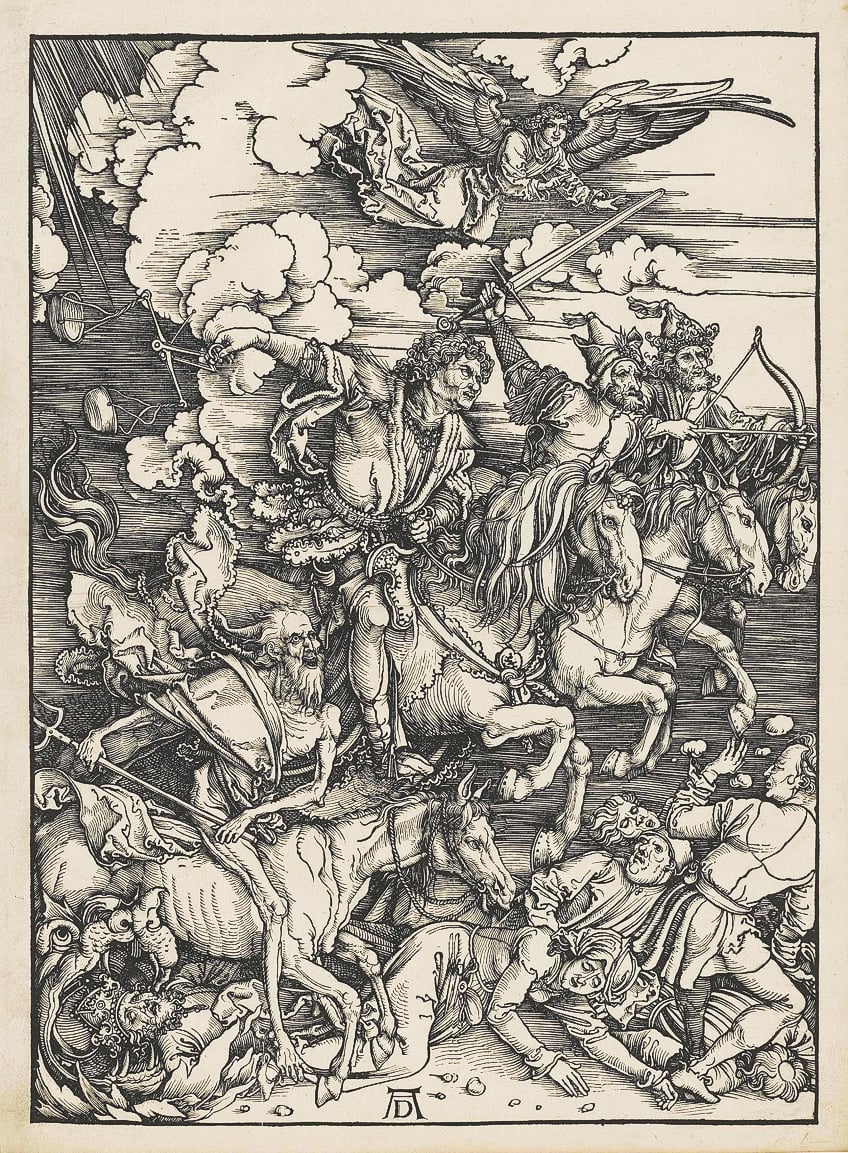 We see the clouds behind the four horsemen are lighter, contrasting with the shadows. Dürer also created these contrasts in the rest of the subject matter, for example, the delicate shading between the folds in some of the figures’ clothing and the highlighting of the horses’ musculature. Value is accentuated here with the assistance of lines, which is another art element.

Value in art does not stop at highlights and shadows. It can also create illusory light effects and emphasize specific focal points in a visual composition.

Value in art examples that emphasize focal points will also apply contrasts of light and dark. This is evident in Francisco Goya’s The Third of May 1808 (1814). The left portion of the composition appears lighter compared to the right portion which appears darker. The illusion of light is given by the painted lamp in the center, and the men to the right with the guns in their hands, are standing behind it, placing them in the shadows. 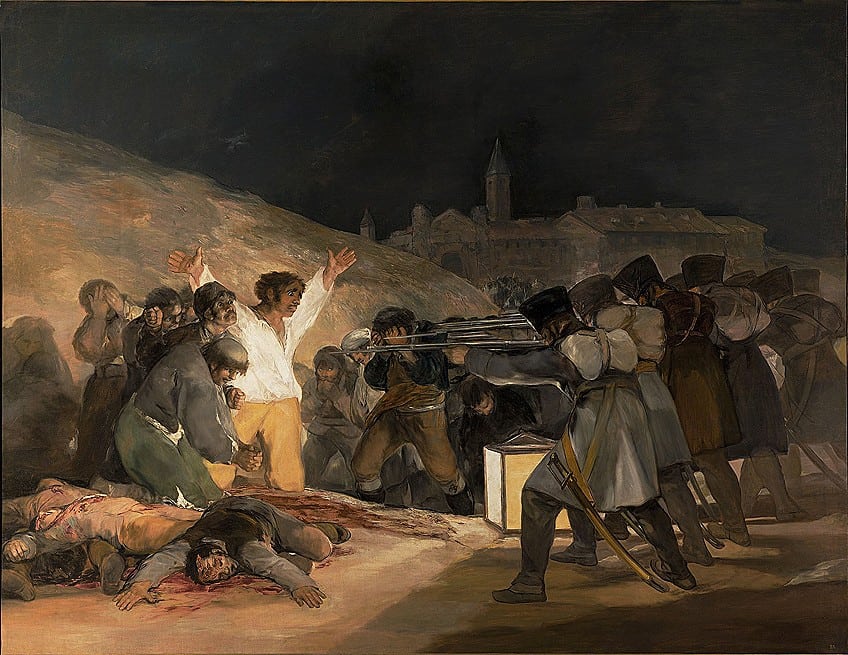 The Third of May 1808 (1814) by Francisco Goya, located in the Museo del Prado in Madrid, Spain; Francisco de Goya, Public domain, via Wikimedia Commons

The light from the lamp in the center is shining on the focal point, which is the man standing with his outstretched arms facing the men on the right. Goya creates a contrasting interplay of light and dark in this oil painting, which also creates emphasis and sets the mood.

Attention is drawn to the man courageously facing the men pointing guns at him. This not only shines a light on the main protagonist in the painting, but it also shines a light on a deeper, more thought-provoking, historical event that took place on the third of May in 1808.

This leads to an important point when utilizing an art element like color, specifically value. If it is purposefully applied, it has the power to shape the visual narrative and evoke a spectrum of emotions. It has the power to create calm and peaceful moods or dynamic dramatism.

More than Colors: Art with Value

However, beyond the physical application of paint on canvas or pencil to paper, and the arrangement of colors and values, we cannot forget the inherent value that art provides. From cave art, church art, or pop art – art has been in existence as long as humans have been alive.

It is one of our most natural forms of self-expression and exploration of ideas, concepts, and events that are close to our hearts. 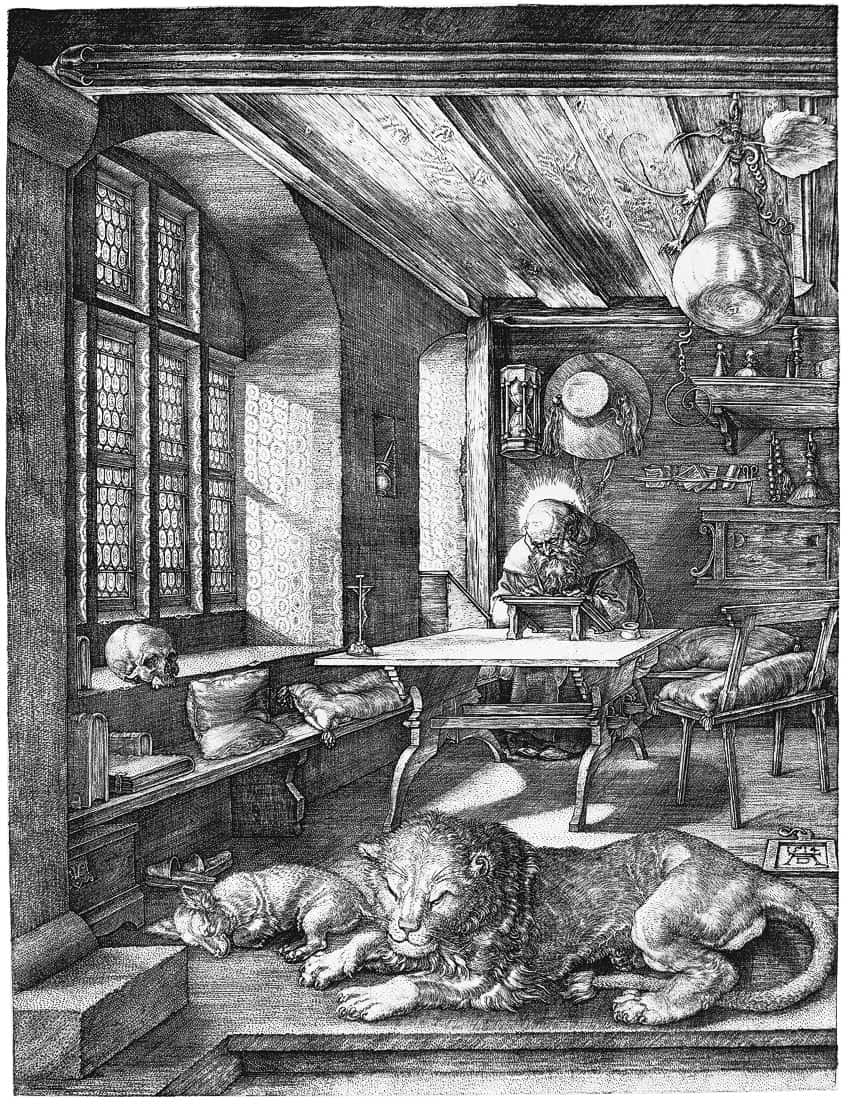 The Many Shapes and Sizes of Value in Art

In this article, we discussed one of the seven elements of art, which is value. It is also one of the tools we can use when it comes to utilizing color, which can apply to different media like paintings, watercolors, or drawings. 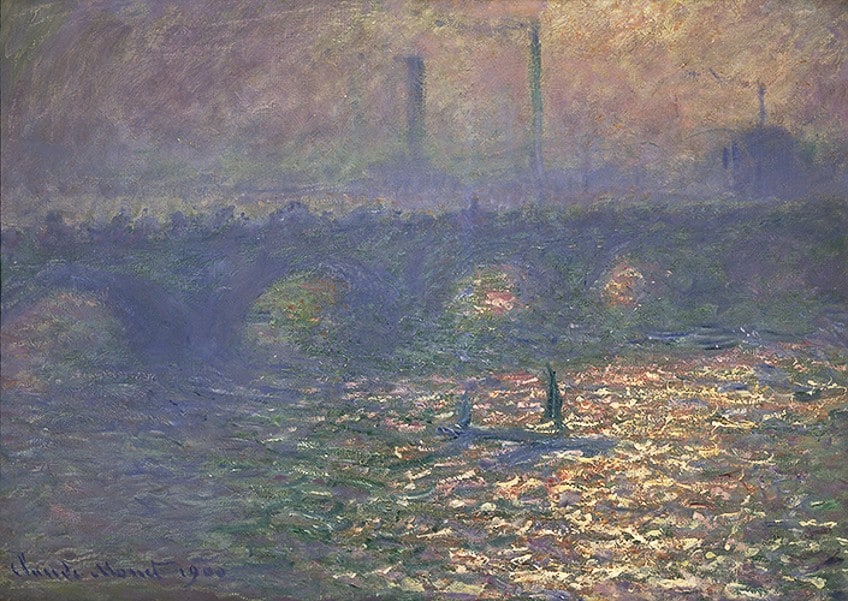 There are also several variations of value in art, referred to as high-key, low-key, and mid-range. Value adds effects like highlights and shadows, which create emphasis, perspective, depth, contrast, and so much more to a visual composition – giving it life.

Value in art comes in many different shapes and sizes as we have illustrated with value in art examples. It is considered an important art element to understand and like so many other art enthusiasts and artists, we also encourage you to grab a pencil and a sheet of paper and start sketching an object to get a first-hand experience of how value in artworks.

What Is Value in Art?

Value is an art element, alongside color, texture, line, form, shape, and space. Value refers to how light or dark a visual composition is, the so-called lightness and darkness of a painting, drawing, watercolor, or graphic design.

What Are the Types of Value in Art?

Why Is Value in Art Important?

Value in art is often called the most important art element because it gives a visual composition character. It creates depth and three-dimensionality through shading and highlighting. It also adds emphasis and contrast and can give a visual depiction more meaning beyond formal art elements like color, line, form, shape, space, and texture.