Line in Art – Discover the Different Types of Line in Art 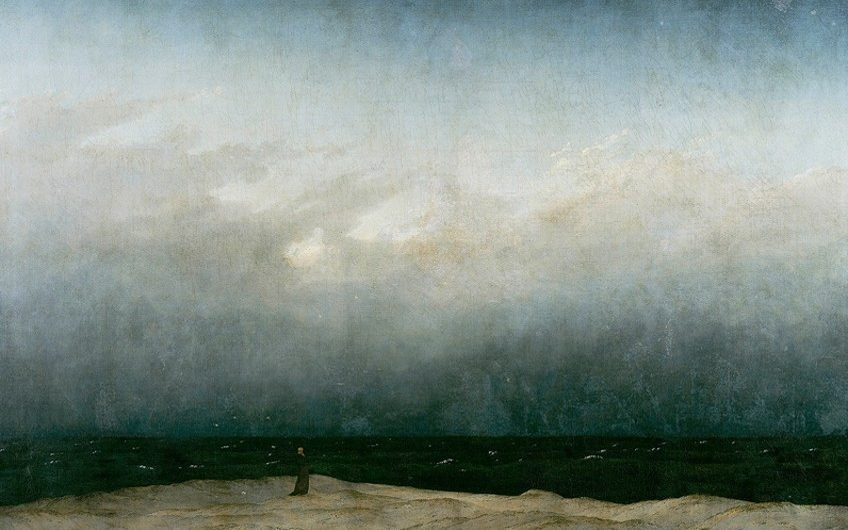 Lines are everywhere we look – can you imagine what an object or shape would appear like without lines giving it a structure or form? That almost seems impossible! In this article, we will discuss the line in art definition as well as provide examples to illustrate the different types of lines in art.

Line is fundamental to any artwork’s overarching form or shape. Sometimes we see lines clearly and sometimes we do not, but they are there. Before we look at the types of lines in art let us contextualize them within a larger scope of the elements and principles of art.

The Elements and Principles of Art

Line in art comprises one of the seven most known elements of art, the other six being form, shape, value, color, texture, and space. These are formal art tools that are applied to create a visual art composition and can span across all fine arts like sculptures, drawings, paintings, photography, graphic arts, as well as architecture, and even interior design.

The elements of art can be applied in unison or isolated for specific purposes.

They are also like formal art tools, however, they can function as the organizing principles around how to apply the elements of art.

If the goal is to create an artwork to convey speed, the art principles of rhythm and movement will direct how the elements of art are applied. For example, lines would be applied in repetitions or patterns to emphasize speed. Furthermore, these would also create a sense of unity of the overall artwork. There can be numerous art principles at play in one artwork.

What Is Line in Art?

Now that we have a bit of context around where line as an element of art fits, what is a line in art all about and how does it make a difference to an artwork? Below we will discuss the several main types of lines and what they look like.

The Types of Line in Art

Line in art comes in different lengths, shapes, and sizes, for example, curved, zigzag, spiral, wavy, horizontal, vertical, diagonal, and more. It is also important to note that any type of line can be short or long, thick, or thin.

We will discuss these in more detail below.

Horizontal lines move from left to right, or right to left, in other words across. They are usually described as being straight lines that are “flat” and “parallel” to the earth’s horizon, which is the line we see when the sky meets the earth or where the sky meets the ocean. This is also termed the “horizon line”.

Horizontal lines are often attributed to qualities like restfulness, calmness, solidity, or steadiness because it lies in line with the earth.

They can also convey distance and space through linear perspective, which creates depth and three-dimensionality in a two-dimensional (flat) visual composition like a canvas or piece of paper. In other words, parallel lines (orthogonals) converge at a focal or vanishing point on the horizon line in the visual composition. 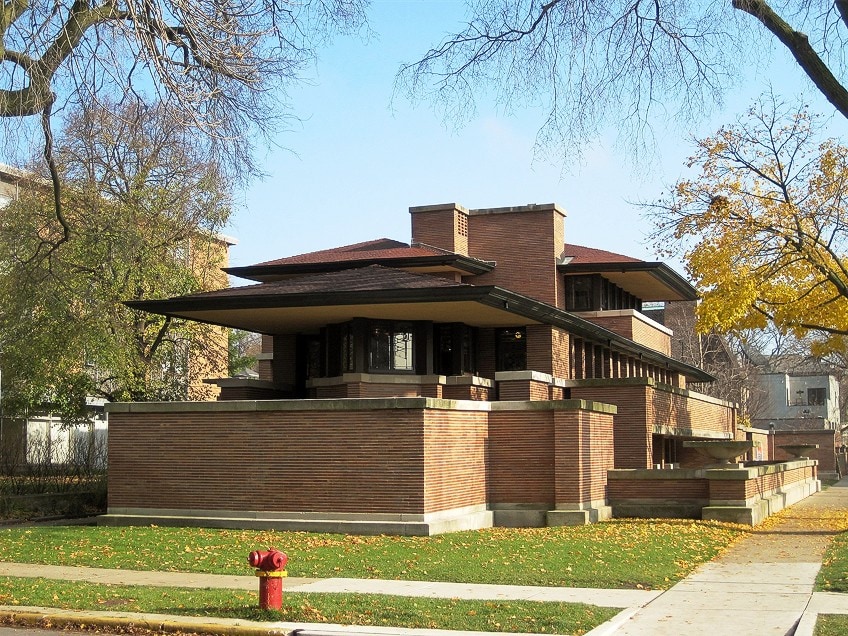 Examples of line in art that depict horizontality can be seen in architectural structures which will appear sturdier, like the Frederick C. Robie House (1909) designed by the architect Frank Lloyd Wright. 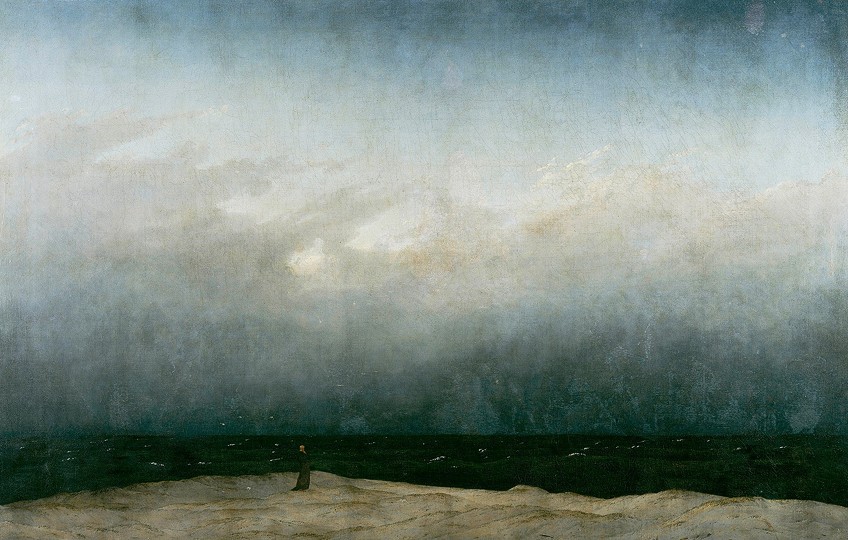 This is an example from the Chicago-born architectural style called the Prairie Style, of which the renowned Wright was a part. This style has often been described in terms of echoing the natural American Midwest landscape and Wright is often quoted as describing these buildings as “married to the ground”.

Another example of line in art depicting horizontality is “The Monk by the Sea” (1808 to 1810) by Caspar David Friedrich.  In this oil painting, we can visibly see the horizon line, where the sky meets the sea.

Vertical lines are best described as moving in an up and down or down and up direction and are known as being “perpendicular” to the earth’s surface/horizon, or any other horizontal line. Vertical lines are often attributed to qualities like strength, power, and spirituality, as well as giving height and prominence to the subject matter.

There are thousands of examples of line in art that utilizes vertical lines, from architecture to paintings. 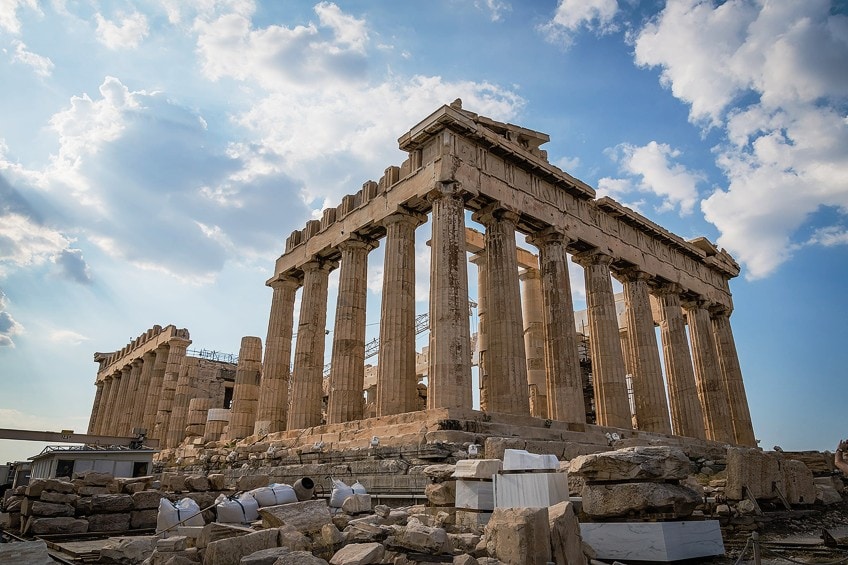 The Parthenon, built between 447 BC and 432 BC in Athens, Greece; Phanatic, CC BY-SA 2.0, via Wikimedia Commons

We cannot miss some of the best examples of vertical lines in the rising spires and pointed arches of the Gothic cathedrals all over Europe, for example, the Notre-Dame de Paris, which was completed in 1345. It is not only in Gothic cathedrals where we find vertical lines but also in the ancient Greek temples like the Parthenon (438 BC) in Greece, which have rows of Doric Order columns surrounding it, reportedly 46 along the outside and 23 along the inner side.

The repeated vertical lines create a patterned effect, which we also see in many other ancient temples.

Diagonal lines are usually described as straight lines that “slant”. It can go in any direction like left or right, but it will appear seemingly skewed or angled in that direction. This type of line can often provide a sense of movement and dynamism in a visual composition because of its “unstable” angle. Furthermore, diagonal lines can also be utilized in perspective to draw attention to a specific focal point or create a sense of depth and three-dimensionality in a two-dimensional visual artwork.

Examples of diagonal lines in art include the oil painting by Gustave Caillebotte “Le Pont de l’Europe” (1876), which depicts a strong diagonal line created by the bridge on the righthand side. 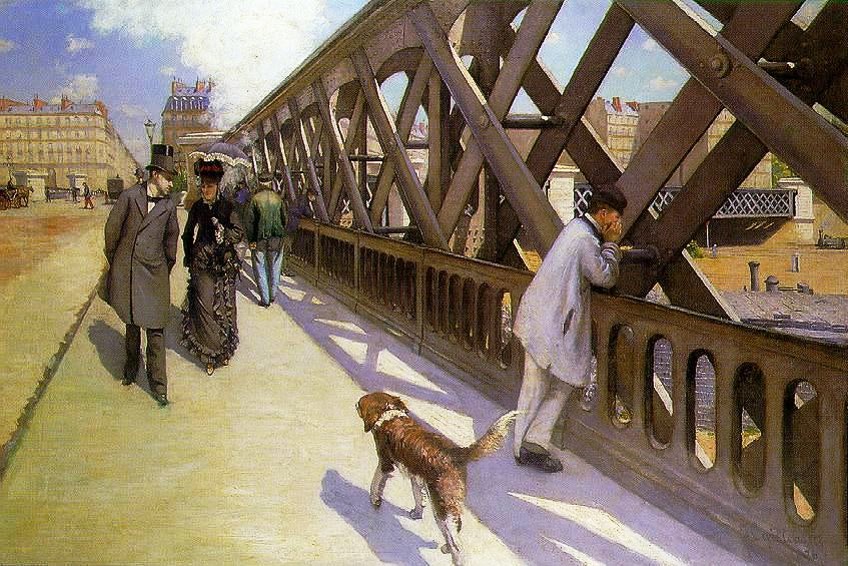 Curved lines are often described as bending in form and can be spiral-shaped or wavy. They are also attributed to aspects of “sensuality”, conveying the natural curves we see on the human body, or other aspects like fluidity or softness.

Curves can be applied for almost any purpose. 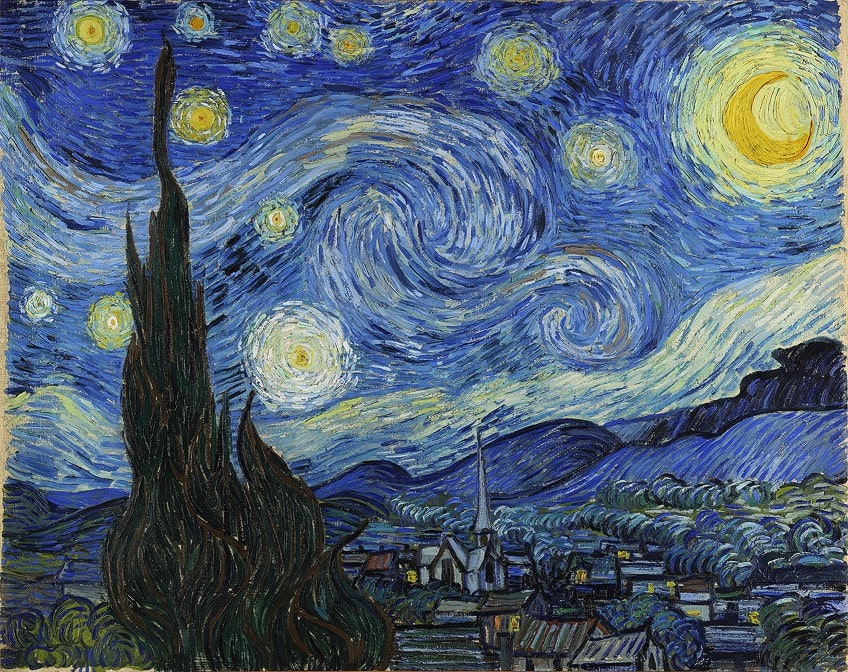 Examples of curved lines in art include the famous oil painting by Vincent van Gogh The Starry Night (1889). Here we see the curly and curvy lines forming the sky and clouds, which adds another, more expressive, component to the artwork giving it an emotional quality beyond a realistic portrayal of the sky. Beyond painting, curves are also in other media like sculptures, for example, the limestone figurine Venus of Willendorf (c. 24 000 to 22 000 BCE).

Here we see natural curves that accentuate the entire human figure, giving the idea of voluptuousness, fertility, and beauty.

Zigzag lines can be thought of as almost the opposite of curved lines. They appear more angular and geometric, as well as more energized in their appearance because they move from one point to the next and up and down.

Zigzag lines can be applied to give a sense of dynamism and rhythm in visual composition and are often attributed to qualities like “chaos” or evoking heightened emotions because they are not static or as fluid as we see in curved lines.

Furthermore, zigzag lines can also be applied to indicate a pattern or decoration in any type of artwork, which will create diversity and a more interesting subject matter, whether it is in a realistic or abstract portrayal. An example of zigzag lines in art includes the more contemporary art from the conceptual artist Solomon LeWitt and his Wall Drawings series.

How to Apply Line in Art

While there are other types of lines, like broken and dotted lines, above we mentioned the main types of lines in art. However, these lines can be applied in a variety of sizes, lengths, and purposes. Below we provide some of the main methods of applying lines in art.

Short and long lines refer to the length of a line and when applied in artworks can take on different meanings. Short lines can convey a sense of movement or rhythm whereas longer lines can be applied to create an outline or convey a sense of distance or depth.

Thin lines will create a different effect compared to thick lines. For example, thin lines will soften a visual composition. It is important in terms of finer details and can provide artworks with more depth and three-dimensionality in terms of the background of an image.

Thick lines will also provide depth and three-dimensionality to a visual composition; however, it will be evident more in the foreground, which will be closer to us, the viewers.

Contour lines refer to the outlines of a subject matter, which will provide the fundamental structure or shape of the object or figure in the visual composition. It will usually not include shading or any other art elements. It is also sometimes referred to as the “silhouette” and focuses more on the edges of the subject matter.

There are also cross-contour lines, which act in a similar manner, however, they focus on the overall form of the subject matter and not only on the edges or outlines of it. 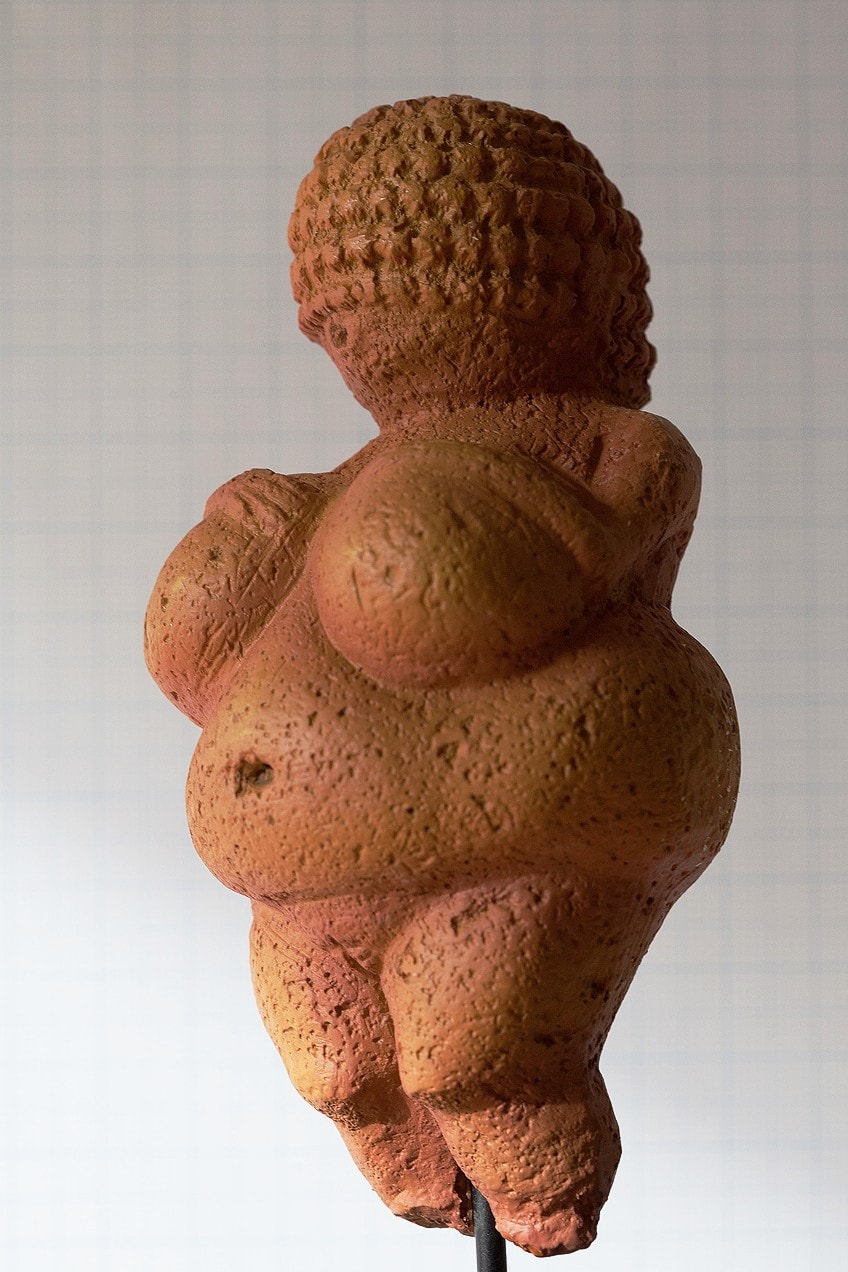 Copy of the Venus von Willendorf figurine. The original was created in c. 25 000 BP, some 25 000 to 30 000 years ago; photographer User:Thirunavukkarasye-Raveendran, CC0, via Wikimedia Commons

Shading can be done through hatching and cross-hatching techniques, although there are numerous other methods. The primary characteristic is to indicate value, which is one of the other art elements, through shading and tones.

This technique is usually utilized when drawing, but can also be done through other media like painting.

This article provided a line in art definition by outlining a few of the fundamental types and applications of line in art. We introduced some of the main types like horizontal, vertical, and diagonal as well as how they can be shaped to suit subject matter, from thick and thin, to short and long, and others in between. As an element of art, we also illustrated several examples of line in art and how artists have applied them throughout the ages. Lines in art have always been there. It is a fundamental part of preparing a visual composition or enhancing it, whichever way, drawing the line will lead to endless possibilities.

Take a look at our line art webstory here!

What Is Line in Art?

Line in art is a so-called point that moves from one direction to another. It can be any size, length, or pattern. It is part of the elements of art, which are namely color, texture, value, shape, form, and space.

What Are the Common Types of Lines in Art?

The most common types of lines in art are horizontal, vertical, diagonal, zigzag, curved, dotted, broken, spiral, and curly lines, among numerous other types. Each type can be applied differently to convey visual or emotional effects in any artwork.

How Do You Apply Line in Art?

There are many different techniques in which lines can be applied, some of the more standard techniques include shading like hatching or cross-hatching, contour lines, which are also referred to as outlines, as well as variations of length like long or short, and thicknesses.