What Is Impasto in Art? – Learn to Master the Impasto Technique 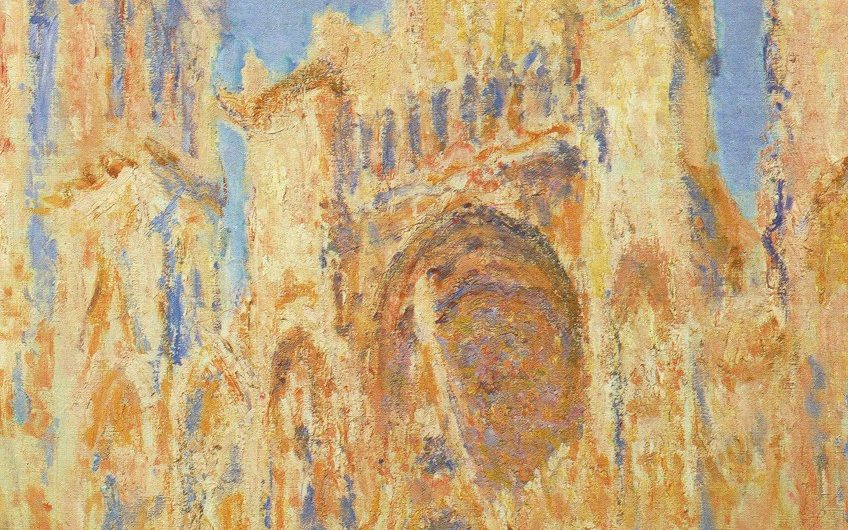 What is impasto in art, and who are the famous impasto artists? Impasto paintings are produced by applying thick layers of paint. The impasto texture is created by leaving the brushstrokes visible. By using the impasto technique artists can make their works seem to come out of the canvas.

What Is Impasto in Art?

Despite the fact that the impasto painting process has been around as long as painting itself, for many years the purpose was to conceal the fact that something had been painted. As a result, many painters, both former masters and a contemporary generation of abstract painters sought to erase any sign of brushstrokes. However, impasto artists would instead embrace the textures that could be achieved by applying the impasto technique.

Many painters were encouraged to employ this style as the defining characteristic of their artwork because the brushstrokes are highly visible and effective.

Because of its thick viscosity and lengthy drying period, oil paint is the traditional paint used for impasto painting. Acrylic paint may also be used to create impasto effects by using thick body acrylic gels. Due to the natural thinness of tempera and watercolor, impasto is often not utilized without the inclusion of a thickening agent. A pastel artist can create a small impasto effect by pushing a soft pastel hard on the surface.

The impasto painting technique is derived from the Italian term impasto, which translated means dough, paste, or mixture. Impasto art is all about the paint paste. It refers to the administration of very thick paint using a paintbrush or even a painting knife. The impasto texture can be created by adding many paint layers or by spreading the color directly from the tube; alternatively, it can be strengthened by a variety of thickening agents.

Gel media are the finest choice for acrylic paintings, whereas many artists utilize wax for oil paintings, which is also a vital part of the traditional encaustic method.

The impasto technique adds a three-dimensional, almost sculptural character to a two-dimensional painting by applying dense paint layers to the canvas’s surface. It frequently gives the impression of paint breaking out of the canvas, which is one of the main reasons why many painters experiment with this method.

Effects of the Impasto Technique

The paint used in the impasto technique performs various functions. For starters, it makes light interact in a certain way, providing painters more control over the effects of light on their work. Unlike traditional two-dimensional canvas works of art, which generate depth through the inclusion of art aspects such as color value, texture, or form, works of art produced with this technique using visible brushstrokes and their three-dimensional look, as well as other aspects of art, to depict the same essential aspect of space.

Many people believe that the apparent, heavily textured paint is a trademark of the artist’s visual language, that these paintings embody the uniqueness of the artist’s personality, or that they encourage creativity, spontaneity, and enchantment to create the appearance of complexity where there is none.

Rembrandt was one of the first painters to use the impasto painting method in oils. Heavy strokes of color are erupting from one of his iconic self-portraits. His colleagues, such as Diego Velázquez and Frans Hals, were also utilizing the impasto technique, but the technique’s potential as an almost sculptural way of painting wasn’t completely embraced until the Impressionists as well as post-Impressionists. Claude Monet used a nearly architectural attitude to impasto painting in his iconic Rouen Cathedral (c. 1892/3) series.

The painter focused on the surroundings and the impact of shifting light by constructing layer upon layer. 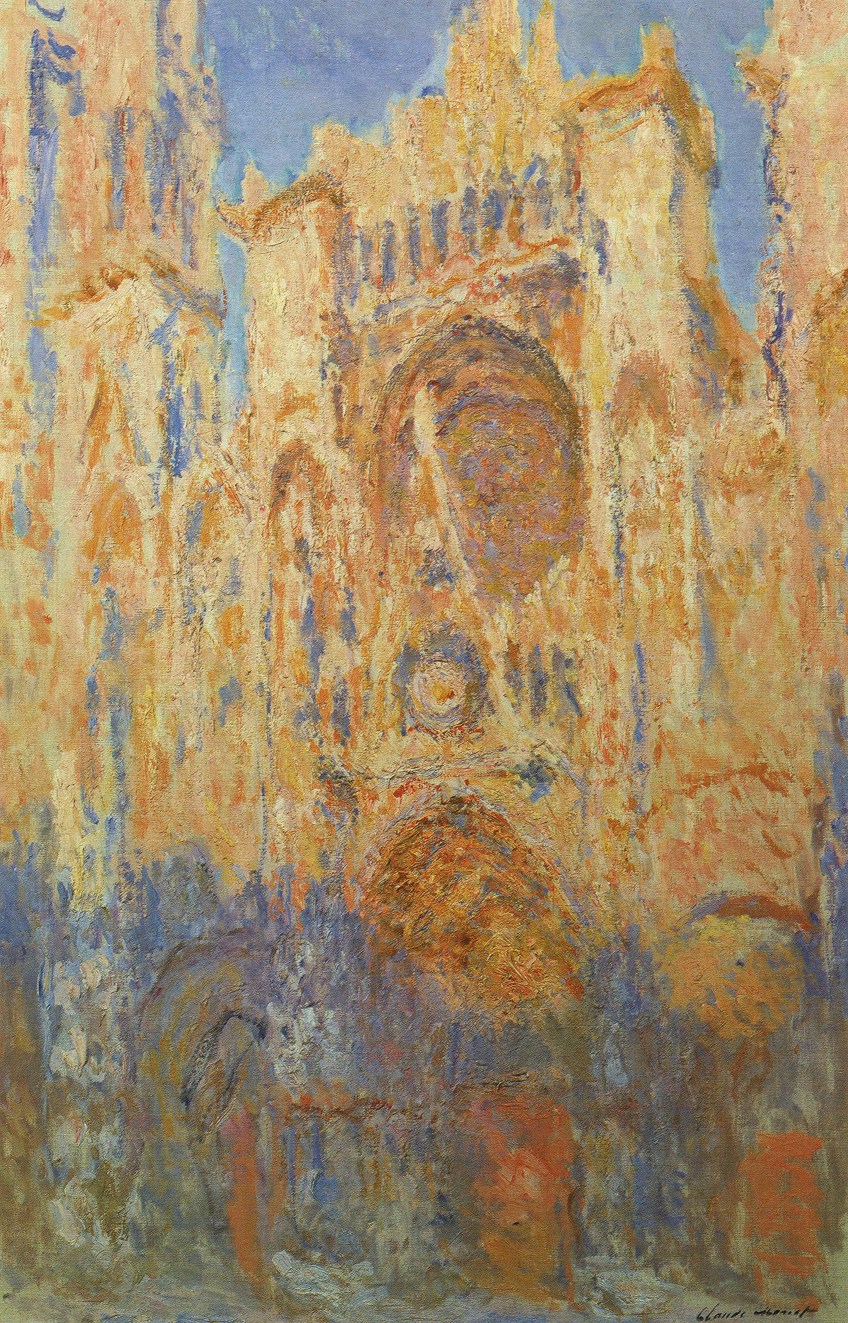 The Impressionist movement, particularly the Impressionist landscapes, was defined by the examination of light, and Monet was regarded as a pioneer of the period. Vincent Van Gogh pioneered a whole new impasto technique. Taking paint right from the tube and transferring it straight to the canvas, Van Gogh’s works defined the notion of Expressionistic art for many owing to the thickness of the paint that conveyed the feeling of movement and inner turmoil.

Jackson Pollock established the Abstract Expressionist style in the 20th century and produced some of the most ambitious impasto paintings.

His action canvases, created straight on the floor, were regarded as historical documents and were related to spiritual, mystical, and philosophical notions. Some of the artist’s works have such a thick layer of color on them that it is already peeling away.

One of the distinctive characteristics of German artist Frank Auerbach is his excessive paint thickness. His pictures are often so heavy because of the impasto layers that they are challenging to hang on the walls of galleries.

The development of the impasto technique is much more than simply an art technique; it traces the metamorphosis of the artwork from a plain surface to a breathing and living object bearing the signature of its creator.

Now that we have a better understanding of Impasto art, we can explore a few impasto paintings. Although the artists that created these pieces come from different movements, they have all embraced the impasto technique. Let’s take a look at how the impasto texture was utilized in these famous artworks. 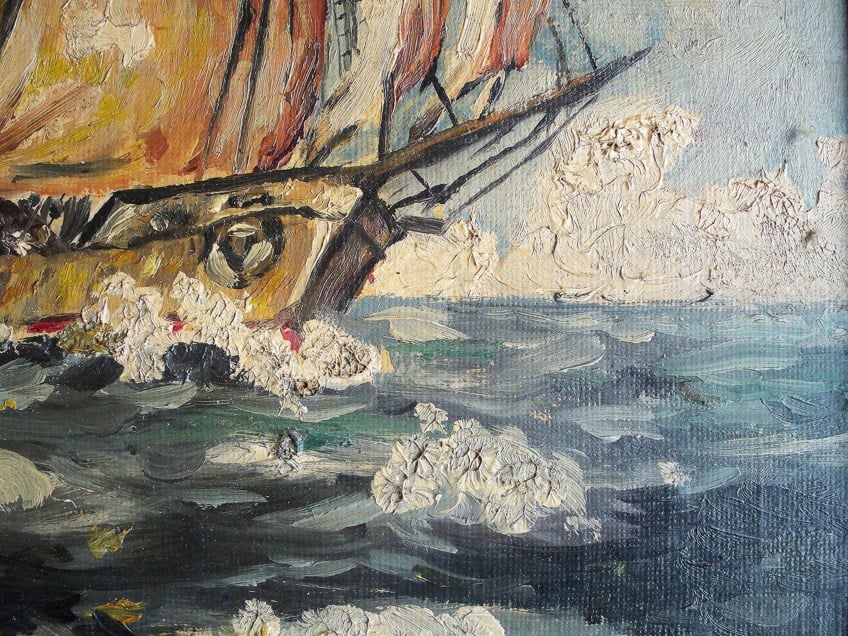 Starry Night Over the Rhone (1888) by Vincent Van Gogh

Impasto is prevalent throughout van Gogh’s art. It is reasonable to conclude that the painter’s most well-known piece is The Starry Night (1889). A few adaptations of this starry night are noteworthy. Van Gogh utilizes small horizontal brushstrokes for more than half of this artwork. The landscape features more vertical brushstrokes, all of which are small and approximately the same length. Each of these strokes’ edges creates a highly consistent texture on the surface.

One of the most stunning aspects of the artwork is the way light is bounced throughout and brilliantly captured with impasto. 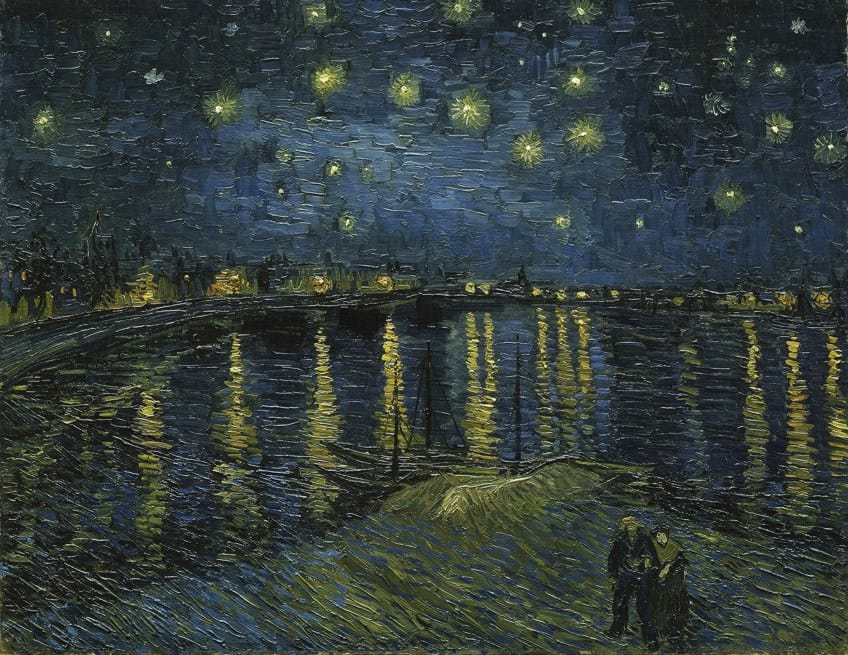 In contrast to his more depressing works, this is one of Van Gogh’s rare works that emanates hope. These opposing emotions in him hint at his mental disorder. His art is heavily influenced by his periodic spells of psychosis and sadness. A fairly recurrent brushstroke may be seen throughout his work. The lime green backdrop has been filled with little wavy brush strokes. These waves may also be seen on the gentle curls of the flowers and their foliage. The majority of the impasto texture is visible around the contours, as is typical of Van Gogh’s works.

The artwork has since faded, but the roses were originally pink and stood out against the pale green wall. 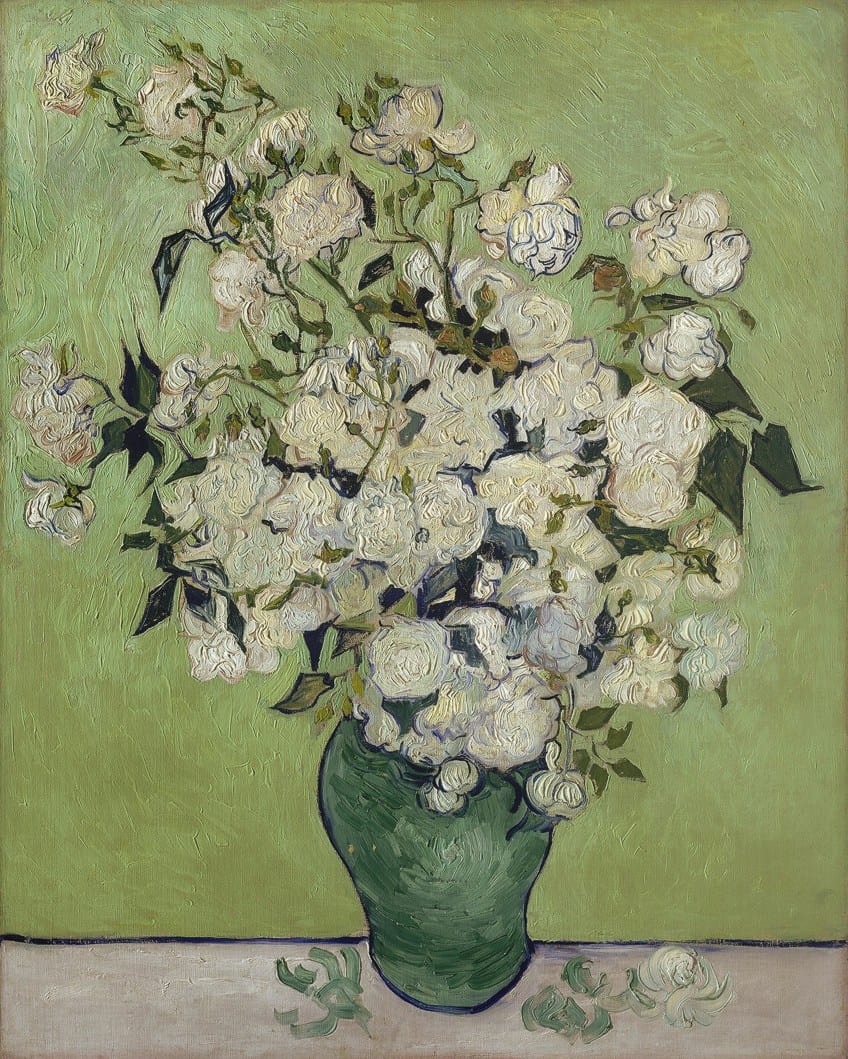 This painting by Cordelia Wilson is an excellent illustration of how impasto communicates through the art medium rather than the art itself. A group of horseback riders may be seen riding up a route. They’re encircled by pale green foliage.

The denseness of the surrounding environment is heightened by the liberal use of impasto and irregular brush strokes.

At the end of the route, there could be a small structure that resembles a tent. This little shelter is most likely what the artist means by ‘home’ in the title. Despite the uneven, unorthodox brushstrokes, the artist has included various minute touches that bind the entire painting together. 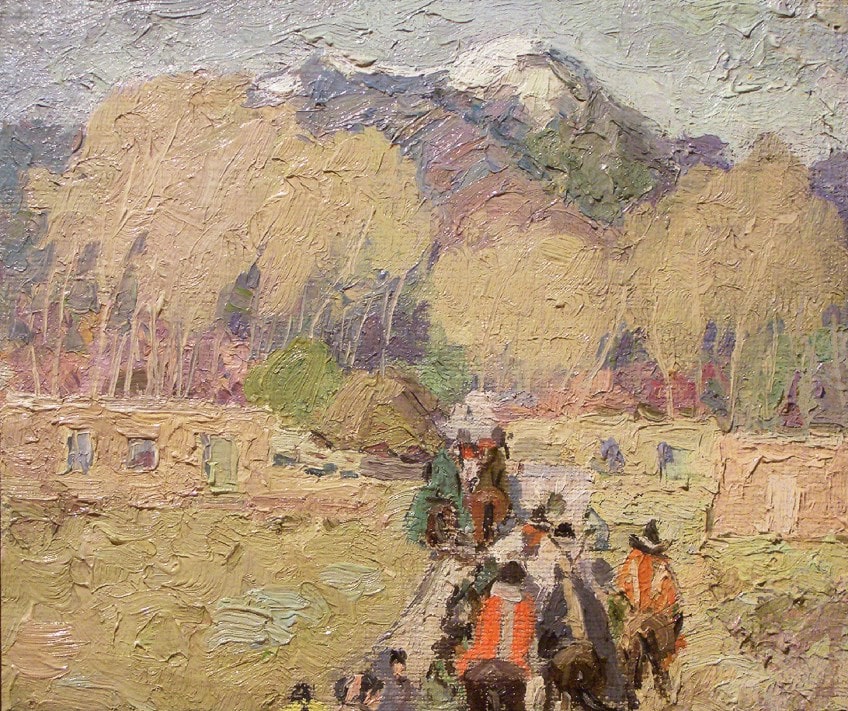 You have likely glanced at this image and thought that there isn’t much to it. However, this appears to be a widespread feature of abstract painting. This artwork, in particular, is from the abstract expressionist era, which began in the 1940s. Art in this genre is founded on spontaneity, and the outpouring of the subconscious is permitted to flow freely. The usual artistic constraints may include objective beauty, purpose, and structure. The image represents a collection of rocks and boulders with rough ground, as the title indicates.

The impasto technique effectively assists viewers in identifying the light source, dimension, and even texture of the represented scene.

At first sight, you could wonder if this artwork has any logic or meaning or if it’s just random colors splattered on canvas. It takes a few minutes for the image to become apparent. Using impasto in paintings became virtually a necessity throughout the contemporary art movement.

Auerbach, on the other hand, takes impasto to its logical conclusion. This is the first in a sequence of frontal head examinations by Auerbach.

He employs unusual hues that don’t generally work well together to emphasize what is essential. The outlines of a face may be seen on the right side of the canvas. To accentuate the model’s characteristics, Auerbach utilizes a lot of maroons, ochre, brown, and even a little pale blue.

Lucian Freud was the grandson of Sigmund Freud, the famed psychiatrist, and it appears that their unique grasp of the mind runs in the family. The artist’s self-portrait depicts him in the midst of intense contemplative meditation. The brushstrokes are blunt, and broad, and display a tinge of light. Using the impasto technique, Lucian Freud creates deep shadows in the cracks of his skin while highlighting his bone structure.

This is due to Lucian Freud’s manipulation of the paint, which is among the most important aspects of his work.

Focus on the skin, huge thick, and rough impasto, lending weight to his head against the flat smoothness of the wall beyond him. Lucian Freud would frequently wipe his brush after each stroke to keep the color changing.

Impasto is derived from the Italian word meaning “dough”. It refers to the practice of putting thick layers of media on a surface in order to create textural depth to an image in painting. Each impasto brushstroke creates color gradations from the shadows created when light hits the elevated paint. An impasto painting can alter in unexpected ways based on the angle of the lighting and the viewer’s point of view, creating nuances of depth and an enhanced feeling of realism. As we have seen, the impasto technique can be applied effectively in a large variety of art styles.

What Is Impasto in Art?

Impasto is a technique where the paint protrudes from the canvas it has been applied on, either owing to the manner of application or the amount of paint utilized. Impasto is most commonly linked with Baroque artists like Diego Velázquez and Rembrandt van Rijn, who utilized it to show aged flesh or the reflection of diamonds or armor. Contemporary and modern painters’ impasto, especially those going into abstraction or creating entirely abstract works, such as Jackson Pollock, Vincent van Gogh, or Willem de Kooning, show a focus on gestures and the physicality of paint itself.

How Did the Abstract Expressionists Use the Impasto Technique?

Around the start of the 20th century, a group of artists known as the Expressionists sought to portray internal emotional experiences rather than just depicting the outside reality in their works of art. One of their favorite methods was impasto painting. The densely layered pigment has several intrinsic characteristics, such as heaviness, thickness, and gravity. The more times it is applied, the greater shadow it casts. It abstracts visuals, affecting viewers’ interactions with the subject matter. It was great for expressing seriousness, passion, and drama, according to the Expressionists.