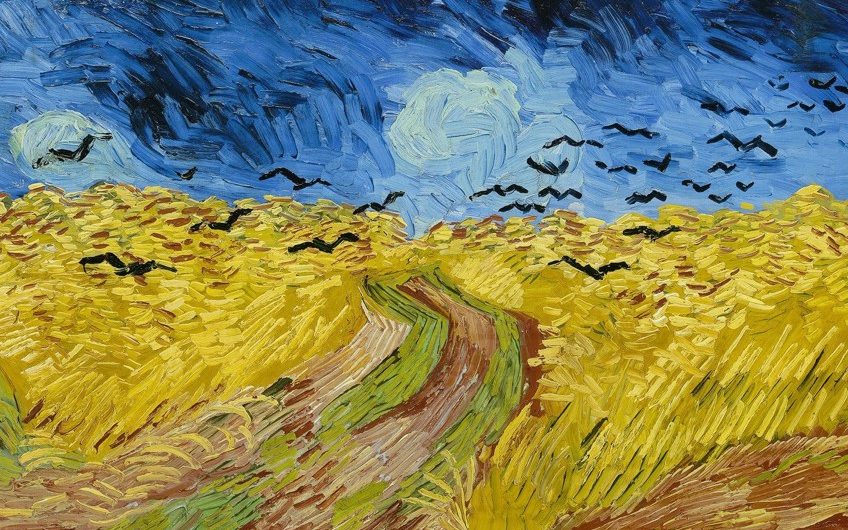 Unity in art is all about tying it all together; together is in fact the operative word here. Unity in art is about all the parts working to create a composition that speaks a thousand words or says nothing at all, either way, it is understood on a deeper level and its impression is felt. In this article, we will discuss what is unity in art and provide various examples of unity in art and how it can be applied.

What Is Unity in Art?

Exploring the question around, “What is unity in art?” we need to briefly look at how it is defined. If we look at the word “unity”, it relates to a state of wholeness; it is described by some scholarly sources as “a totality of related parts: an entity that is a complex or systematic whole”. We can apply this unity art definition for a clearer understanding when we look at unity as one of the Principles of art. 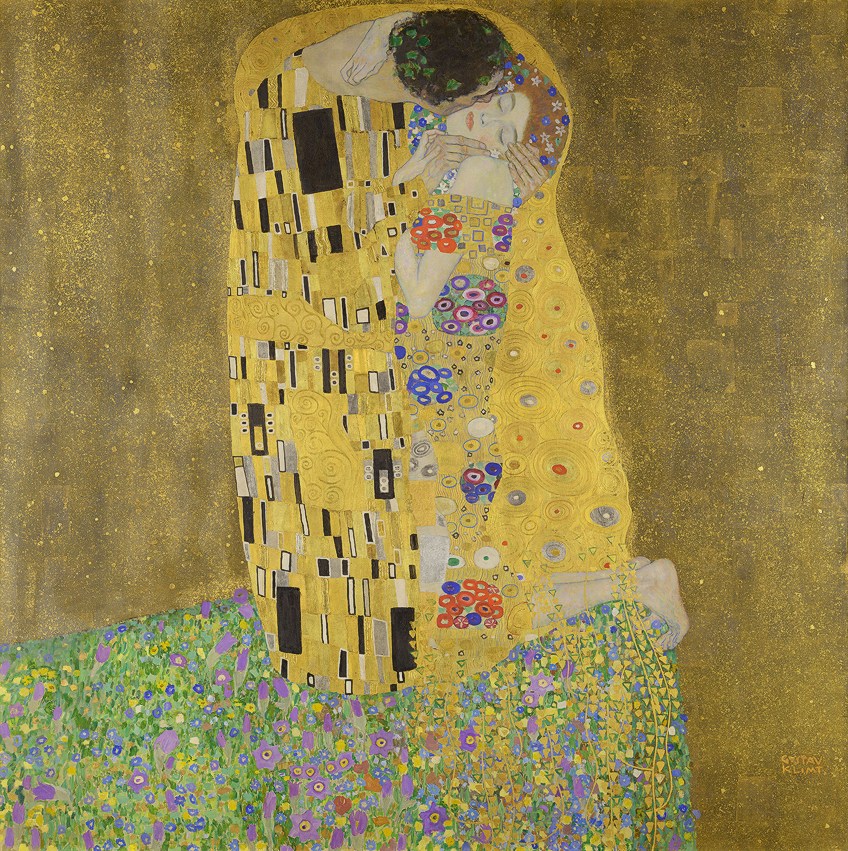 The Kiss (1907-1908) by Gustav Klimt, illustrating the use of unity in art through shape and form; Gustav Klimt, Public domain, via Wikimedia Commons

The wholeness of an art composition, whether it is a painting, drawing, or sculpture, is the adequate application and arrangement of all the principles of art and elements of art. These are considered the “building blocks” of a composition.

The principles of art extend into not only unity, but variety, harmony, balance, emphasis, movement, rhythm, repetition/pattern, proportion, and scale. Additionally, the elements of art include color, space, shape, texture, value, line, and form.

These might seem like a lot of parts needed to complete a composition; however, strategic use of the necessary elements and principles will yield desirable results and ultimately, a unified whole. 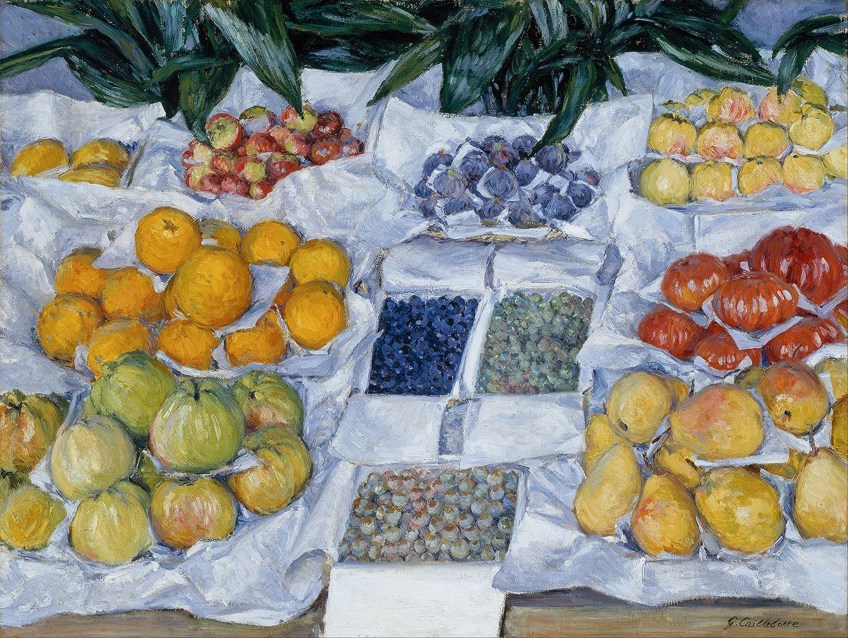 The Importance of Harmony, Unity, and Variety in Art

This is when the various art elements we mentioned above are applied in a similar manner, or when “related” art elements are applied together, for example, similar color schemes, shapes or forms that complement one another like circles and ovals, textures that are not too contrasting, and more. 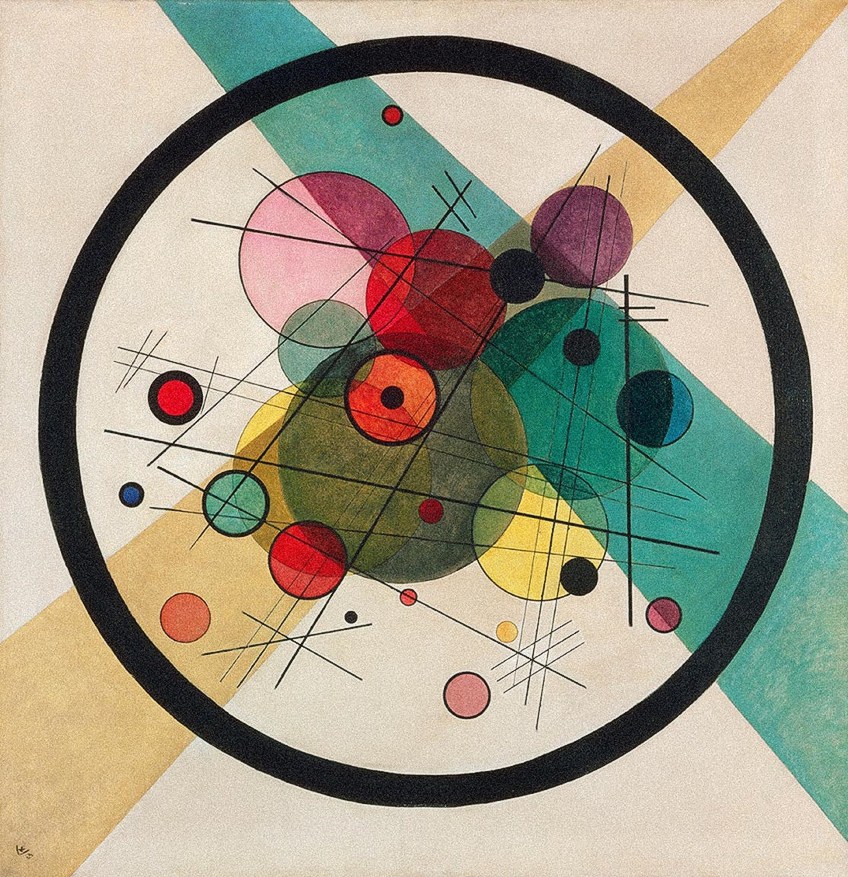 When harmony and variety work in unison in a composition there is a unifying effect of the whole, which relates to how unity in art works. Therefore, not only harmony but unity and variety in art are important principles to understand when creating or analyzing an artwork.

Therefore, it is important to remember when researching and reading about unity and harmony in art that harmony can mean something entirely different than unity.

Training Our Eyes: How to Use Unity in Art

Unity is described by some art sources as an “impression”, and it is different to the other principles of art that are visually applied in artworks. Unity is more of a concept; however, it can be measured by several criteria or applied as a technique to ensure a visually whole artwork. With this, we can train our eyes to see the level of unity in art compositions. 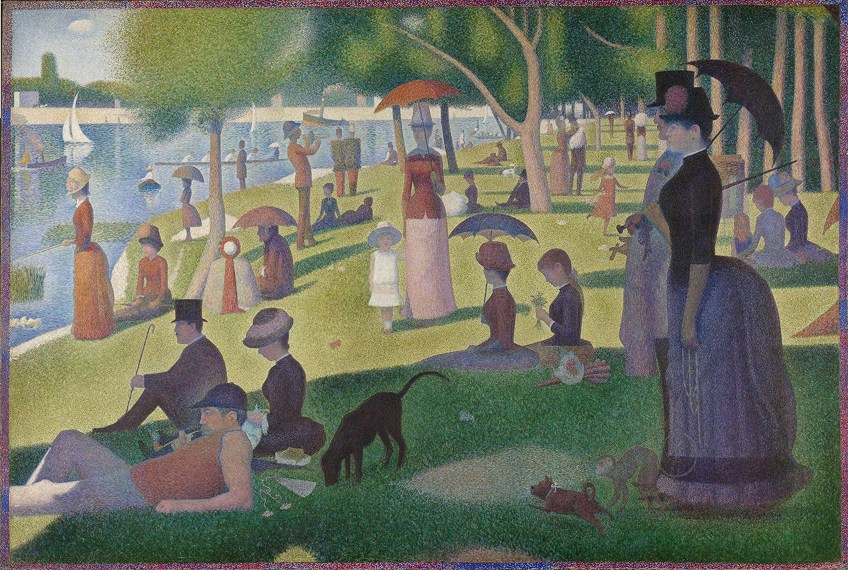 A Sunday Afternoon on the Island of La Grande Jatte (1886) by Georges Seurat, illustrating the use of unity in art through shape and form; Georges Seurat, Public domain, via Wikimedia Commons

Proximity in the unity in art relates to how close objects or figures are to one another in a composition. Some objects can be positioned in patterns, or repetitions, while some are positioned very close to the other as a group.

Some objects or figures have more space between them than others, which also affects the level of unity.

Whichever way objects or figures are placed in proximity to one another, this grouping enhances the sense of wholeness or unity of the composition; some sources also state that even though there might be different “parts” placed together, this still enables our minds to view it as one or a “mass”.

Examples of unity in art include Duccio di Buoninsegna’s Maestà (1308 to 1311), depicting groupings of angels and saints around the Madonna and the baby figure of Jesus Christ. When we look at this composition the proximity of the figures creates more unity of the whole, additionally, the proximity of the figures around the Madonna and Jesus Christ creates emphasis of the central figures. Fernando Botero’s Guerrilla de Eliseo Velásquez (1988) is another example of unity in art, where the composition is filled up by various figures near one another, giving the impression of a unified group. 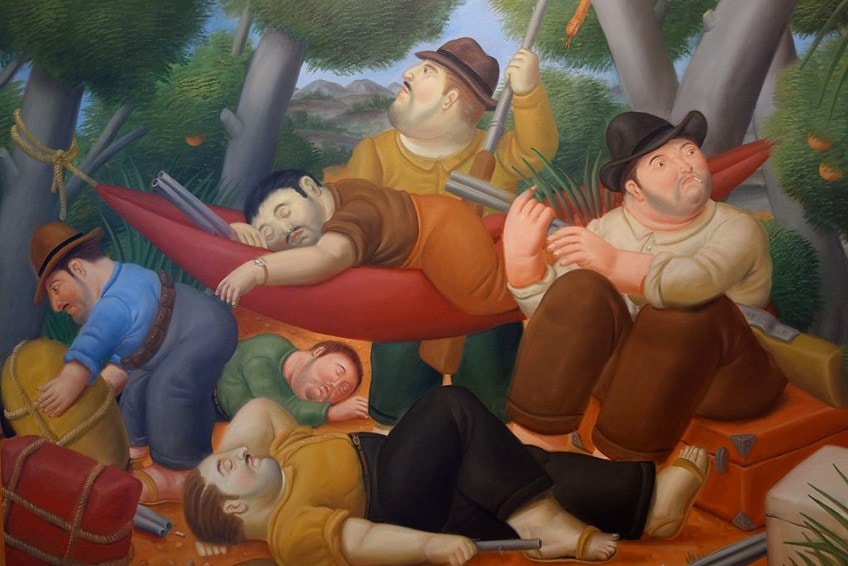 Like proximity above, repetition consists of various patterns and sequences, be they objects, figures, colors, shapes, textures, or any other art elements. Repetitions of patterns can also be without any gaps in between them, which are referred to as tessellations. The application of these repetitions creates a unifying effect within the overall composition.

Additionally, it can further emphasize the subject matter and evoke emotion.

There are numerous examples of unity in art where repetition is applied, some include the Pop artist Andy Warhol and his famous Campbell’s Soup Cans (1962) composition. This composition copious images of Campbell’s soup cans arranged next to one another. Not only is the image repeated, but it also emphasizes the idea of commodities and mass production.

Another unity artwork example includes the Study of Regular Division of the Plane with Reptiles (1939) and the lithographs Reptiles (1943) by M.C. Escher. Here we see repeated arrangements of reptiles, which all appear to be walking amongst one another. 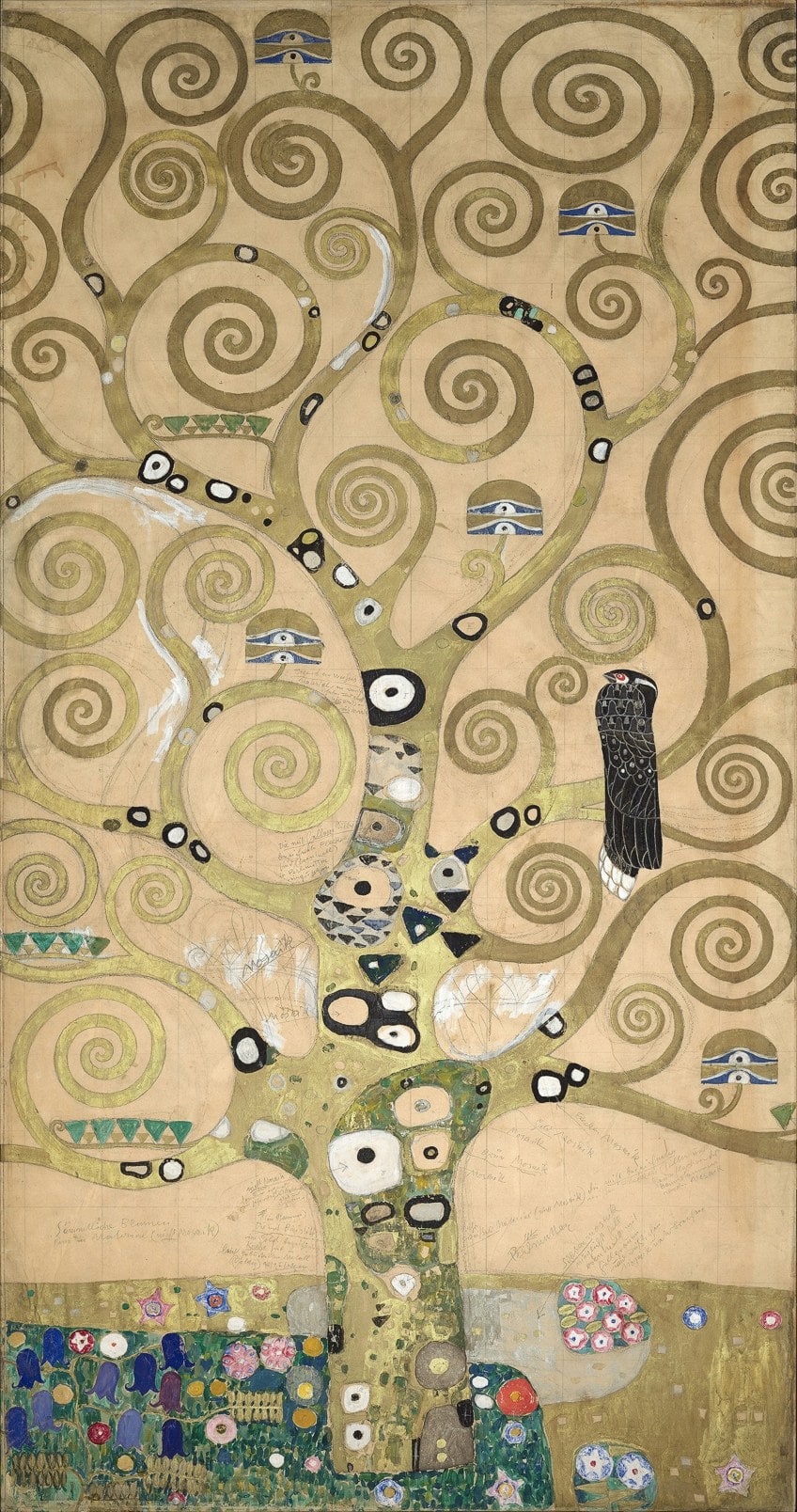 Simplicity refers to the exclusion and limitation of art elements like color, line, shapes, and so forth. When there is less color, for example, a composition will be simpler compared to one that is filled with color; black and white or pencil sketches create simplicity in art, which can be done through the hatching drawing technique.

Simplicity does not have to be relegated to only utilizing one art element; with the strategic placement of various art elements there can still be a simplification, which creates a unified whole.

For example, a composition, be it a painting or sculpture, can consist of shapes like circles or squares, arranged in a pattern, all in the same color or color scheme. With the patterned and repetitive nature through shapes, color, lines, or others, it can appear simplified. 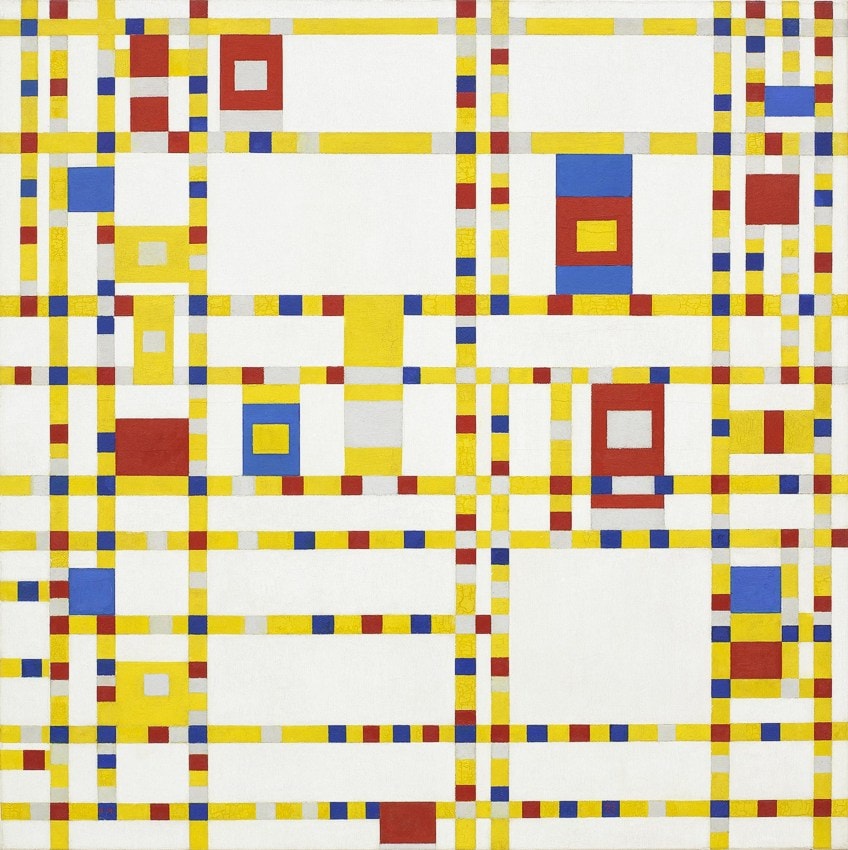 Broadway Boogie Woogie (1942-1943) by Piet Mondrian, illustrating the use of unity in art through simplicity; Piet Mondrian, Public domain, via Wikimedia Commons

This also correlates to the idea of minimalism and the “less is more” notion. We can see this style from the Minimalist artists from the mid to late 1900s. Unity artwork examples include IKB 191 (1962) by Yves Klein, which consists of a purely monochromatic blue paint on canvas. IKB stands for International Klein Blue, and it refers to Klein’s custom combination of blue. 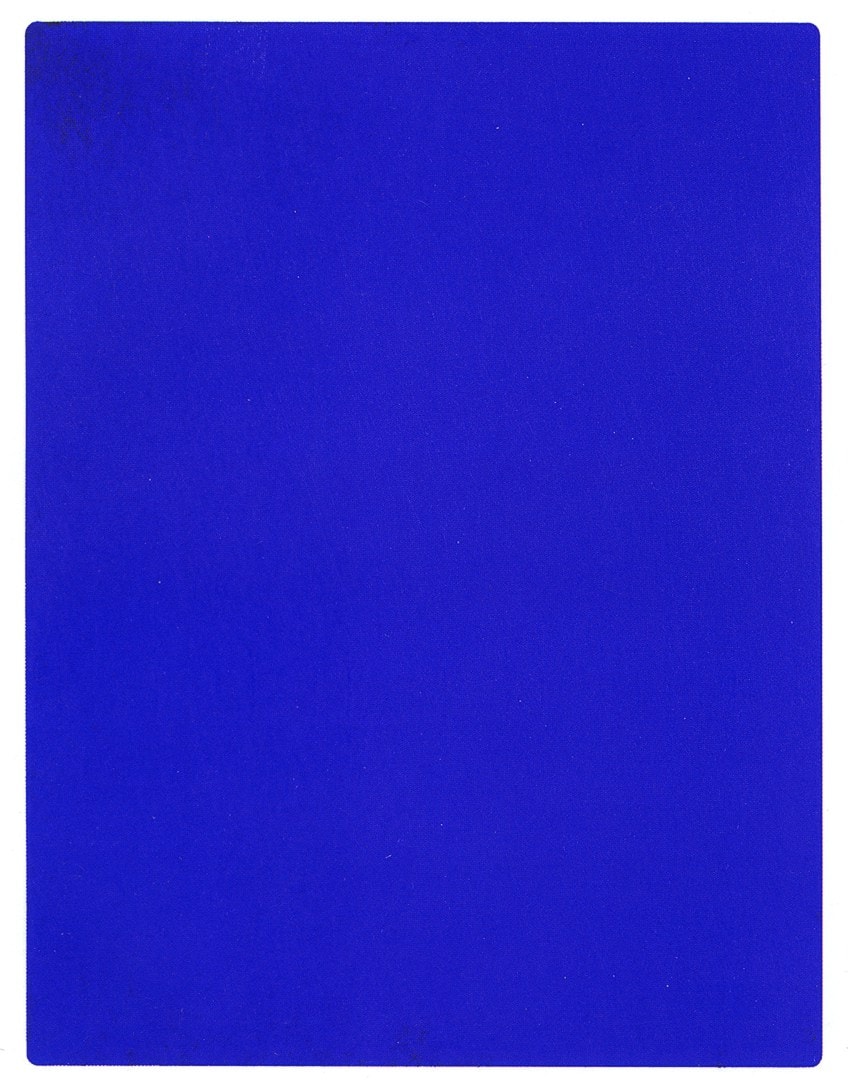 Other examples of unity in art that apply the techniques of simplicity include Die Fahne Hoch! (1959) by Frank Stella. This is created from enamel paint on canvas, consisting of lines and black paint. Stella’s arrangement of color and line in a simplified yet patterned manner gives the composition a harmonious balance, which ultimately unifies all components.

Summary of Unity in Art

In the article above, we explored unity in art as one of the principles of art and how it can be understood as a concept that refers to an artistic composition as a unified whole of all the elements. We also explored the unity art definition and how unity in art should not be confused with the other principle of art called harmony, however, the two terms are interchangeable.

The opposite of harmony is variety, and if both work together, it can create a sense of unity in a composition.

Unity in art can be applied through various techniques, we named several above, for example, through proximity, repetition, and simplicity. Some of these techniques are closely linked to one another, for example, proximity can be achieved by repetition. All three can be utilized in versatile ways coupled with the application of different art elements like color, line, shapes, textures, and more.

Unity in art is almost like the glue that binds a composition and all its elements together. Without a sense of all the parts, or “building blocks” working together to create what is referred to as a unified whole, the composition will not have the same effect or appear out of place, so to say. Unity in art is an important result that gives a lasting impression for all artworks, be they drawings, paintings, sculptures, installations, graphics, or any other medium.

What Is Unity in Art?

Unity in art is one of the principles of art, otherwise also referred to as design principles, which include balance, harmony, variety, scale, proportion, repetition, emphasis, rhythm, and movement. These are utilized with the elements of art like line, color, texture, shape, form, value, and texture to create an artistic composition.

How Is Unity in Art Used?

Unity in art can be applied with different techniques; there are several common techniques that will help achieve unity in art, for example, repetition, proximity, and simplicity.

Why Is Unity in Art Important?

Unity in art is an important art principle because it determines the so-called wholeness or, as some state, the cohesiveness of the composition. It brings all the elements and other principles together and conveys the overall message or meaning of the artwork, without it the artwork will appear confusing or out of balance.

Is Unity in Art the Same as Harmony in Art?

Unity in art has a different meaning to harmony in art, although some use both interchangeably. It is important to also understand the separate meanings of these art principles. Unity refers to the wholeness of a composition, while harmony refers to art elements utilized in relation to one another, for example, similar shapes, similar colors, or other related art elements. Harmony in a composition contributes to the unity of all the parts.

What Are Examples of Unity in Art?

Examples of unity in art include placing objects or figures together or in groups, this can also be done with art elements like lines, shapes, or colors. Other examples include repeating shapes or lines and arranging these in patterns or making tessellations. Unity can also be achieved by simplified arrangements of art elements.