Balance in Art – Exploring the Different Types of Balance Artworks 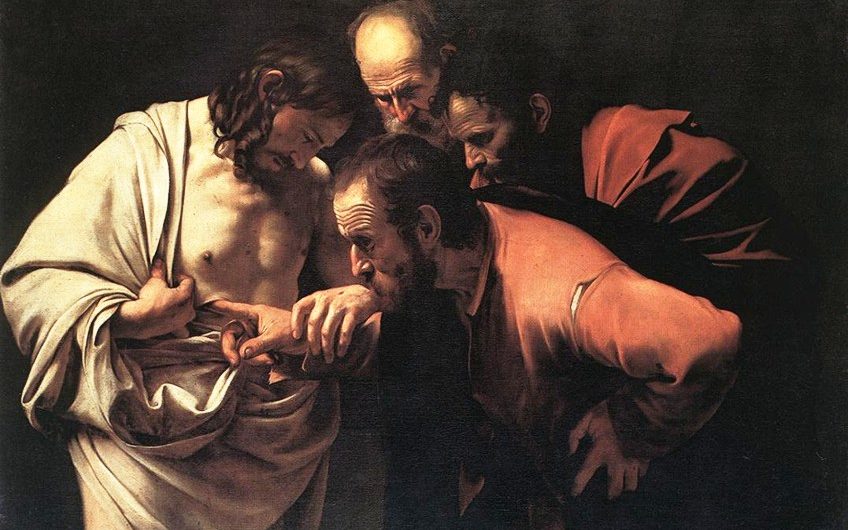 Balance is an important underlying aspect when it comes to visual compositions; our eyes can naturally spot when an artwork appears off-balance or harmoniously composed; balance signals to us a sense of wholeness. But there are different ways in which balance can be utilized to give an artwork its character, we will discuss this in more detail in this article along with various balance in art examples.

What Is Balance in Art?

Balance is part of the principles of art, which are also referred to as design principles; these are namely, emphasis, movement, rhythm, proportion, scale, harmony, unity, variety, and contrast. If you are not familiar with the principles of art, these act as guidelines or rules, so to say, that assist in composing an artwork into an identifiable format.

Furthermore, an art composition consists of the various art elements, of which there are primarily seven. These are, namely, line, form, shape, color, value, space, and texture. All of these elements can be combined in thousands of ways according to the principles of art.

Let us look closer at balance in art, which is commonly described as the “visual weight” of an artwork. This can range from painting, sculpture, drawing, or graphic art. The “distribution” of the art elements is what determines the type of balance in an artwork. 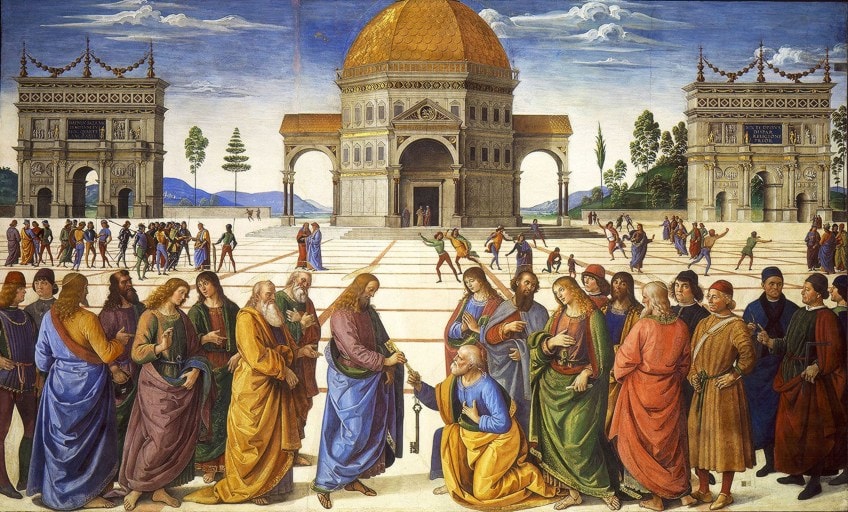 Types of Balance in Art

Symmetrical balance is also termed “formal balance” in art, which means that there is an equal balance between both halves of the visual composition and the images are identical to each other. This type of balance in art also includes a “mirroring” of halves, which is referred to as “Inverted symmetry”. The composition’s halves are separated by the mid-line or otherwise referred to as the “central axis”. This can be divided into horizontal, vertical, or diagonal sections. 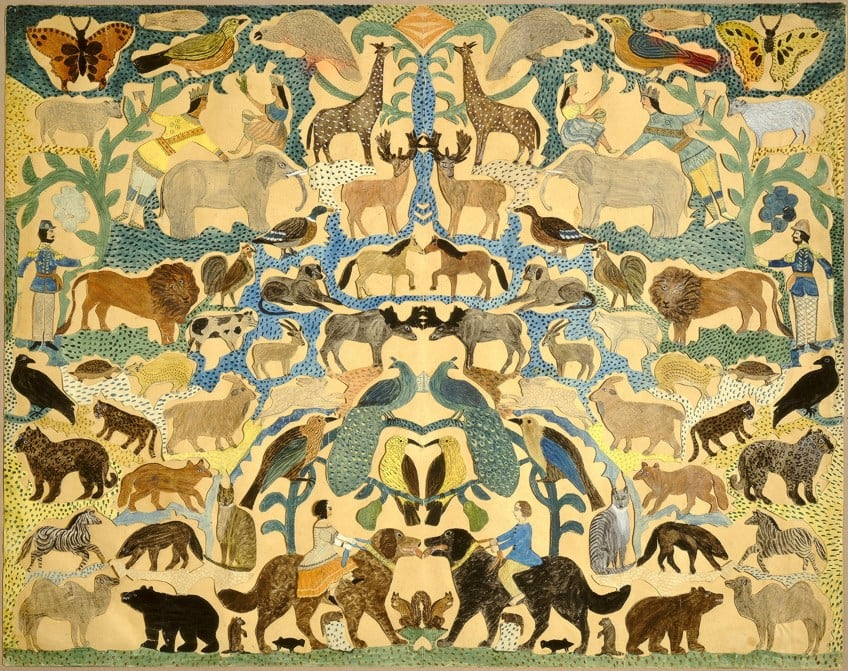 Although symmetrical parts of an art composition are usually identical, these can also differ in slight variations, which is referred to as approximate symmetry. This is when the parts of both halves do not share the same identical or mirroring qualities, although the shapes or sizes may still be similar.

Symmetrical balance in visual compositions is widely utilized in art of all modalities.

The common characteristics related to it include a sense of safety, harmony, order, rationality, and stability in artwork, however, it can become too boring or monotonous if overutilized. We will find this technique commonly utilized in Academic art from the Renaissance period when the primary genres for artworks also centered around History and Religious paintings. Symmetrical balance in art examples includes none other than the famous The Last Supper (1495-1498) by Leonardo da Vinci. 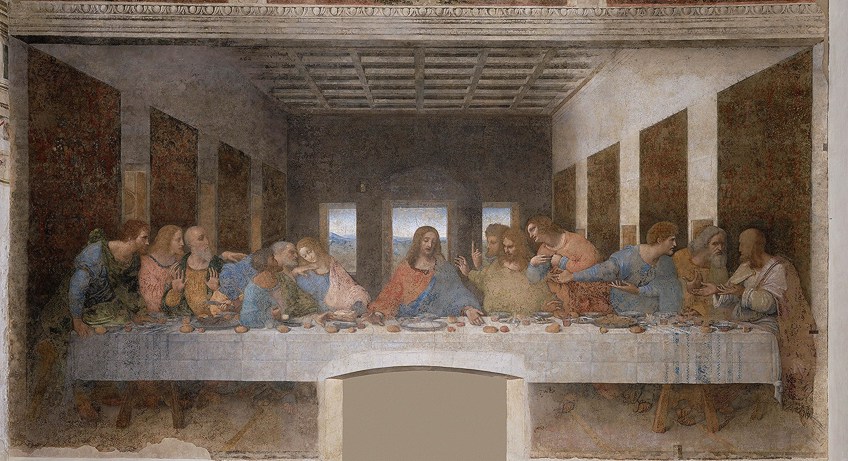 In this painting, approximate symmetry is utilized, while most of the composition is equal in how the art elements are placed, there are differences here and there. For example, the Apostles sitting next to the central figure of Jesus Christ are all different, however, the background is rendered in similar shapes on the left and right-hand sides.

Symmetrical balance does not only occur in paintings, but also in architecture like the Parthenon (432 BC) or the Taj Mahal (1632-1653). In both architectural examples, there is an equal placement of architectural structures, especially the columns, which gives it an overall symmetry. 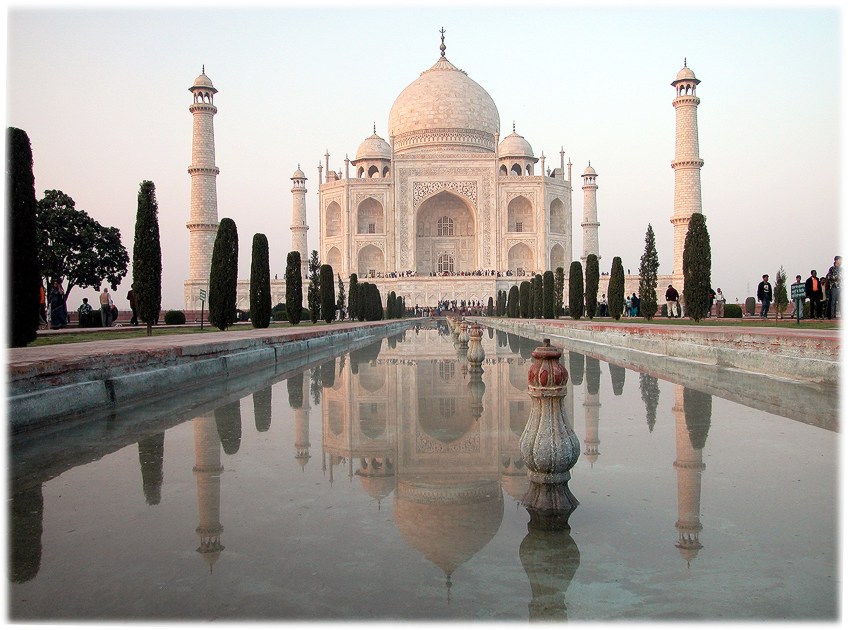 View of the south side of the Taj Mahal, Agra, India; Yves Picq http://veton.picq.fr, CC BY-SA 3.0, via Wikimedia Commons

Symmetrical balance can also occur biaxially, which means that the composition is balanced vertically and horizontally. The Op artist Victor Vasarely is famous for utilizing this type of symmetry in his artworks, for example, his Vega-Nor (1969), depicts the symmetrical balance of a spherical object on a grid.

Although the colors are different, these also mirror one another in the four quadrants.

In other examples like Frida Kahlo’s Self-Portrait with Thorn Necklace and Hummingbird (1940), there is a feeling of balance because of the central figure of Kahlo and the two dark animals, the black monkey on the left and the black cat on the right, on either side of her shoulders, giving equal weight to her left and right side. Similarly, on her head is a figure of eight bands with two butterflies on either side. 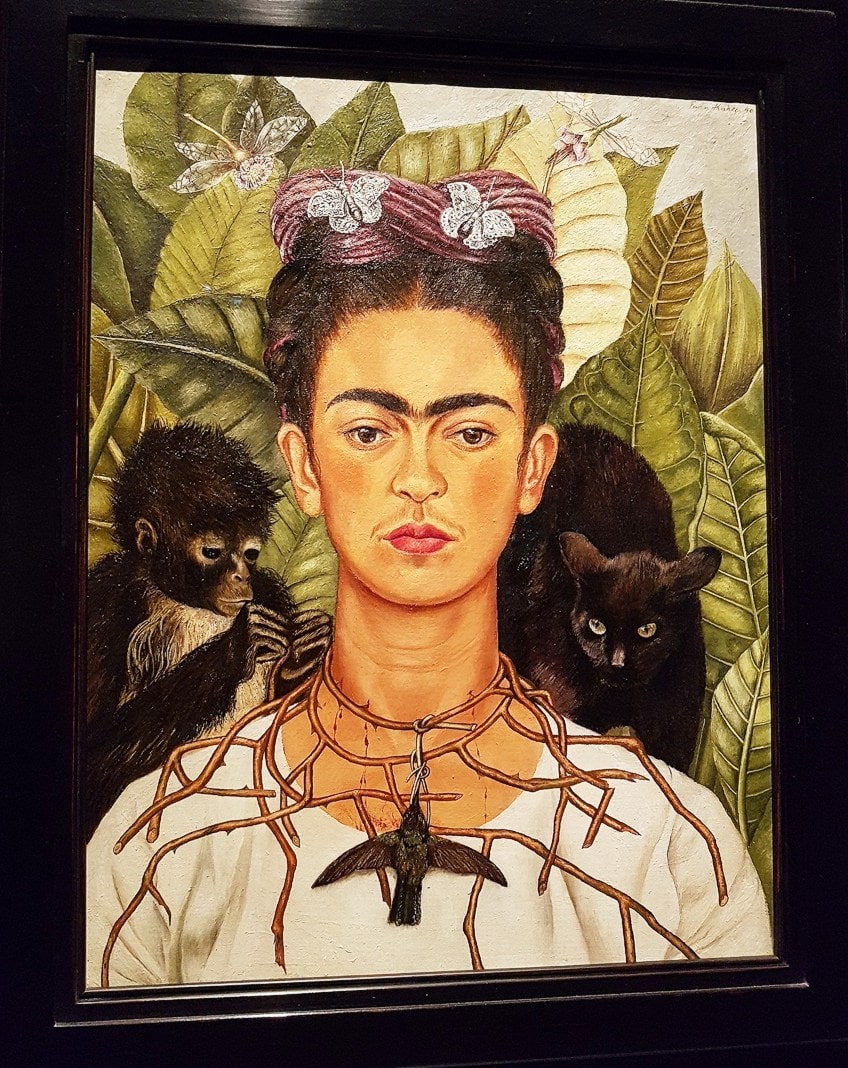 Asymmetrical balance, also called “informal balance”, on the other hand, refers to both halves of a composition retaining a sense of balance, but with different art elements on each side. In other words, both sides have “visual weight” that complements one another to make it almost symmetrical.

The art elements arranged on each side of the composition will range between different colors, forms, shapes, textures, or spaces; for example, one half can appear black and the other half white, or one shape can be larger than the other shape or shorter and longer. 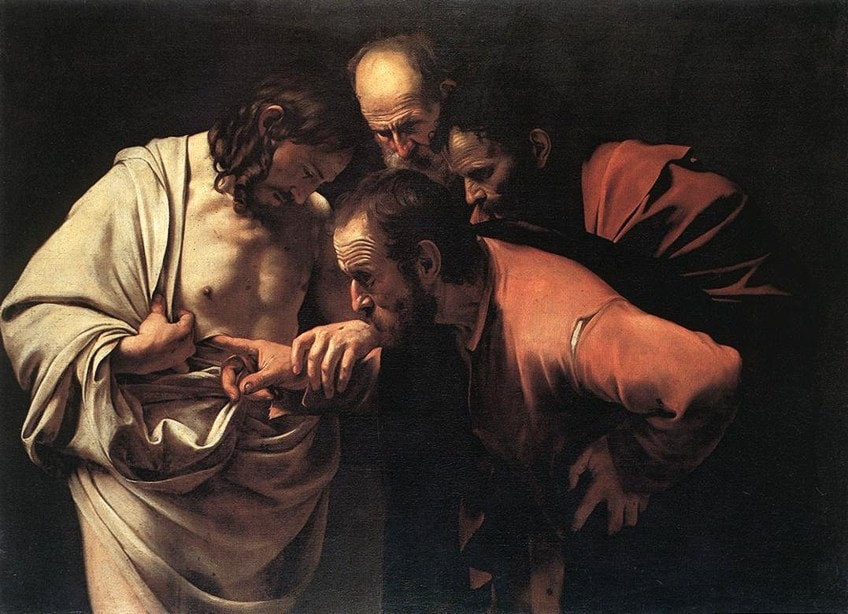 The Incredulity of Saint Thomas (1604) by Caravaggio; Caravaggio, Public domain, via Wikimedia Commons

Asymmetrical balance in art is also described as being more “subjective” compared to symmetrical balance because it requires and involves closer planning to achieve the visual weight on each side of the composition yet remain diverse.

Ironically, it can appear more relaxed and unplanned due to the variety in which the art elements have been placed.

Asymmetrical balance in art examples includes Vincent van Gogh’s The Starry Night (1889), which depicts a tree filling the left-hand side and an emptier right-hand side with only the moon and stars in the night sky. The placement of these objects creates an overall balanced effect here, the one side is darker and heavier in shape than the other side’s lighter and smaller shapes, thus playing off one another. 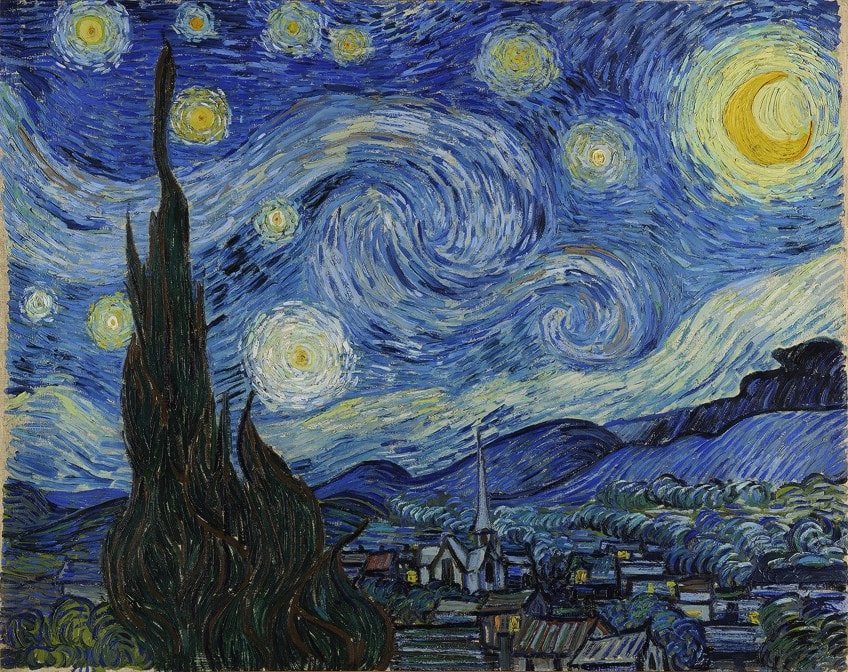 The more abstracted works by Piet Mondrian from the De Stijl art movement depicts asymmetrical compositions that simultaneously create a sense of harmonious balance. Artworks include Composition with Red, Yellow, Blue, and Black (1921), in which Mondrian utilized various sizes of shapes, squares, rectangles, and black lines, coupled with areas of primary colors, white, and black. 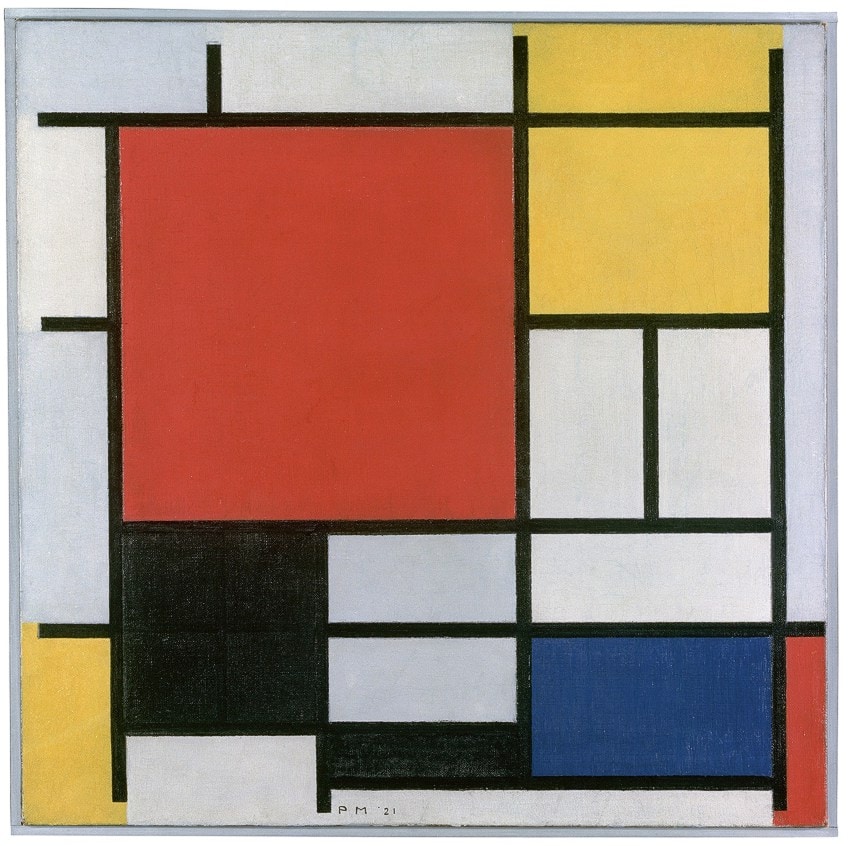 Beyond painting, we also see asymmetrical balance in three-dimensional sculptures or objects, for example, Alexander Calder’s Mobile (1942). Made from paint and iron, the mobile consists of different sizes of biomorphic shapes. The right side is heavier than the left side and creates stability for the rest of the structure, which thins out and becomes several circular shapes dangling from thin wire.

The variations of size on both sides of the mobile emphasize its asymmetry, but it creates a harmonious whole, nonetheless. 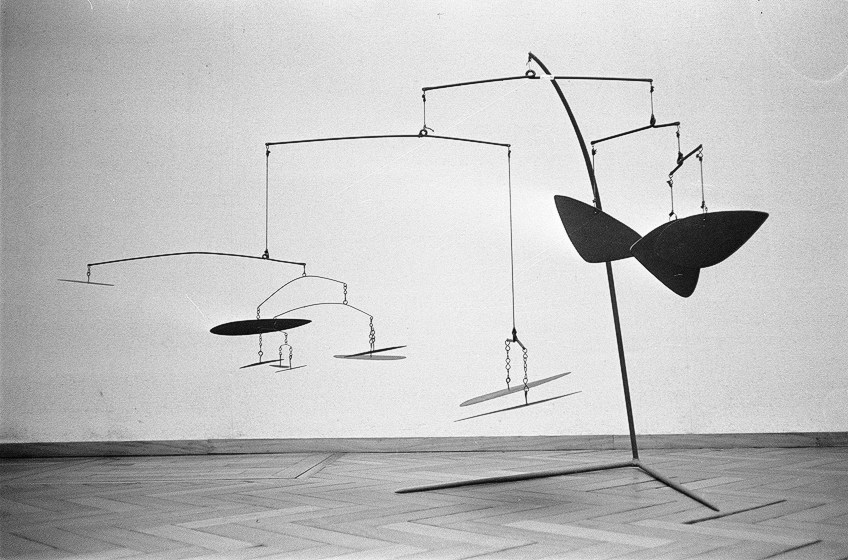 According to the dictionary, the term “radial” means “developing uniformly around a central axis” or “relating to, placed like, or moving along a radius”. A radius is a line from the center of a circular shape or form, like a circle or sphere, to its outer edge or circumference. The word “radius” originates from Latin, and it means “ray” and “spoke”.

Knowing where the term radial comes from will help us understand how radial balance in art is applied. Think of the rays of a light shining outwards or the spokes of a wheel extending to its outer edges. 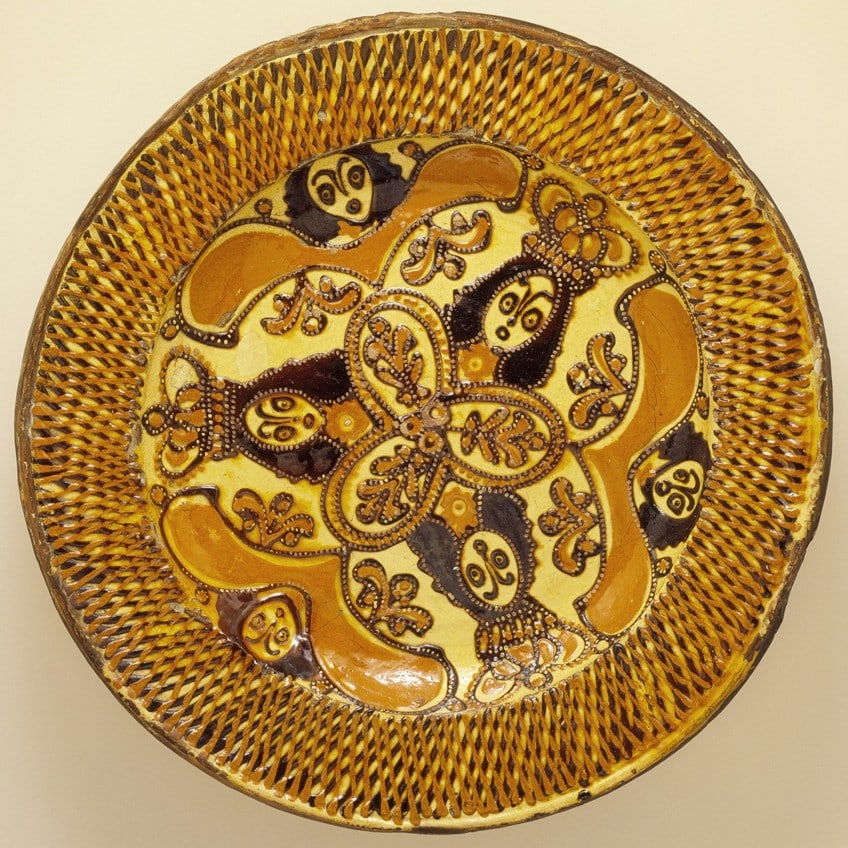 Radial symmetry in art involves any art element placed around the central point “radiating” outwards. Usually, the art elements would be identical and repeated around this central point, these can range from lines, shapes, forms, colors, or others arranges in a radial pattern. This pattern is also recurrent in nature, for example, in flowers, stars, shells, starfish, and many more.

Other examples include spirals utilized to engage the viewer and lead the gaze to the focal point.

Common radial balance in art examples includes mandalas, of which there are hundreds of different designs and patterns, as well as Rose Windows from many Gothic Cathedrals throughout Europe, for example, the Rheims Cathedral, Notre Dame, and Chartres Cathedral, all located in France among many others. 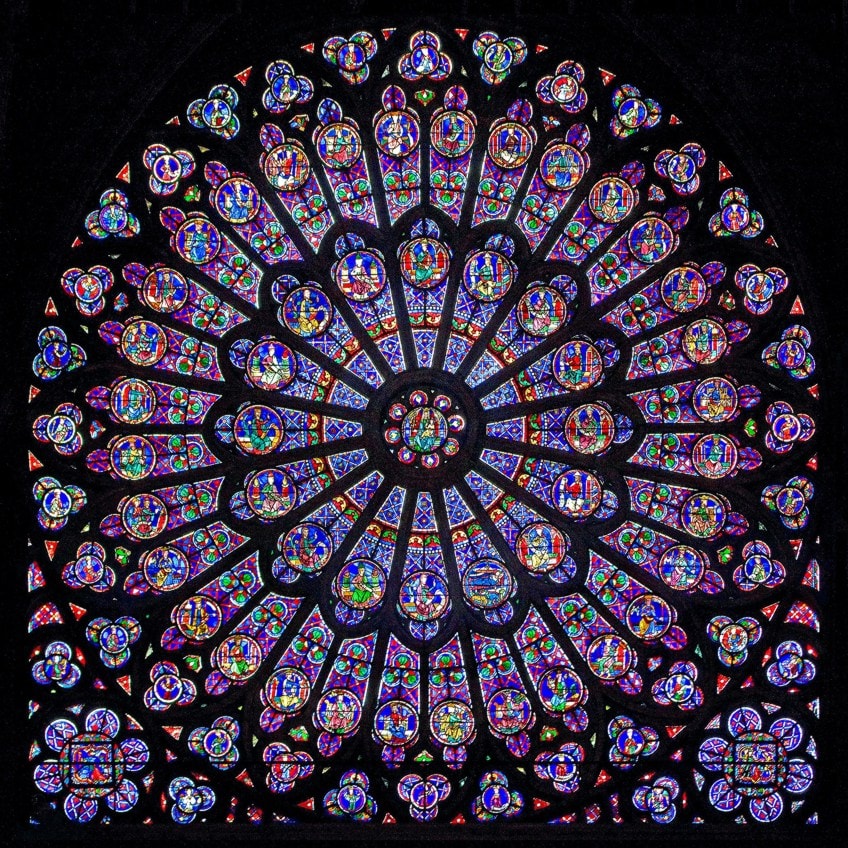 Crystallographic balance, also termed “mosaic” or “all-over” balance, refers to the more randomized placements of art elements. In visual composition, these appear disordered and simultaneously create a sense of order or harmony; it is often referred to as “organized chaos”.

It is usually recommended that the composition is more packed to appear fuller and thus more balanced as a result. The viewers’ gaze will be all over the composition and won’t be able to locate a focal point.

Crystallographic balance in art examples includes the artworks of Abstract Expressionist Jackson Pollock. For example, his Number 5 or No. 5, (1948) and Autumn Rhythm: Number 30 (1950), among many others, all depict his characteristic action painting process of a variety of paints splattered and strewn across the canvas. When we observe Pollock’s paintings, our gaze swims in the sea of the entire surface area, which is filled to the brim, so to say, with lines and colors.

There is no apparent focal point and the seemingly chaotic nature of his compositions creates a balancing effect.

Summary of Balance in Art

In this article, we looked at balance in art, what it is and several of the different types that can be applied as techniques, namely, symmetrical, asymmetrical, radial, and crystallographic balance, which is also known as mosaic balance; artwork examples explored how these techniques have been applied by artists from various art periods.

Balance is one of the principles of art and it works together with the elements of art, which gives it a multitude of methods in which to apply it. Whether it is lines, shapes, forms, colors, spaces, or textures, balance can give an artwork character, variety, and a harmonious feel. It can be gentle on our eyes or take our gaze on a wild goose chase, so to say, either way, balance in art becomes an essential part of an artwork’s unified whole.

Take a look at our balance art webstory here!

What Is Balance in Art?

Balance is one of the principles of art that gives an art composition its so-called visual weight through the arrangement of art elements, namely, line, form, shape, color, value, texture, and space.  The way these are placed in a composition can either make it appear more harmonious or off-balance.

What Are the Different Types of Balance?

There are four main types of balance in art, namely, symmetrical balance, which means all art elements are placed in such a way where both halves of the composition are identical to the other, sometimes also mirroring another; asymmetrical balance refers to different elements of art on both halves of the composition, but it still creates a sense of balance; radial balance relates to art elements around a circular shape or form, and lastly crystallographic, or mosaic, balance refers to art elements placed randomly or more disorganized, it is also called all-over balance.

How Is Balance Created in Art?

Balance can be created in various ways utilizing specific art elements, for example, through larger shapes or forms, especially squares or rectangles compared to circles, darker or bolder colors, thicker lines, more texture, as well as how to utilize the space like foreground or background placement or along the edges compared to the center of the composition. All the art elements interact with one another; therefore it is important to understand how these will create the so-called visual weight in the artwork.

There are several principles of art, namely, balance, emphasis, movement, rhythm, variety, unity, harmony, proportion, scale, and contrast. These are almost like guiding principles in how to utilize and apply art elements like color, texture, value, shape, form, line, and space. 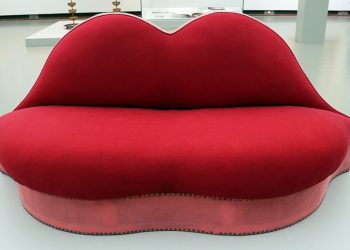 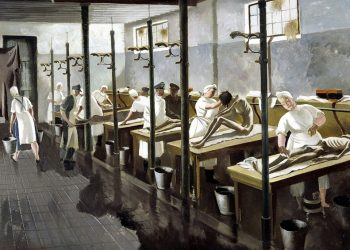 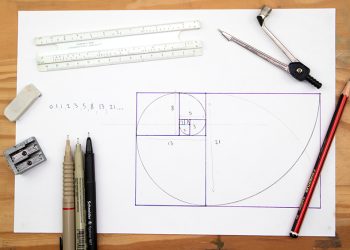