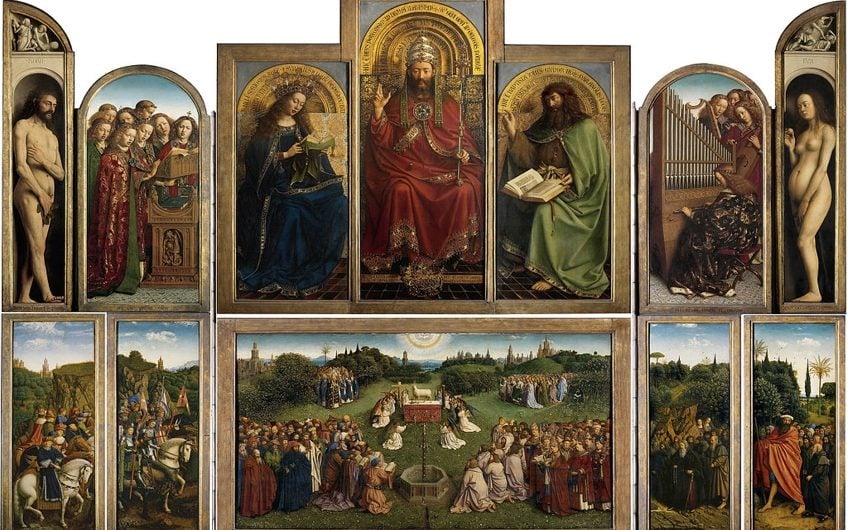 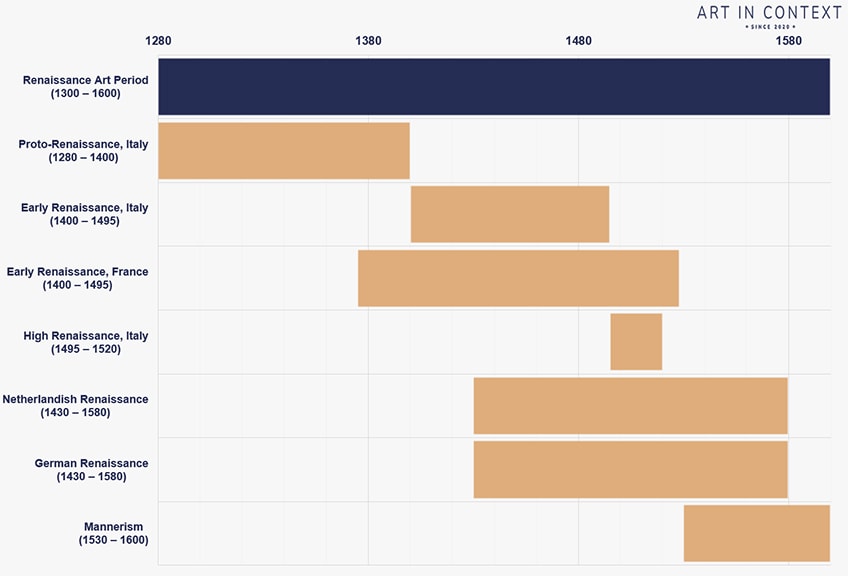 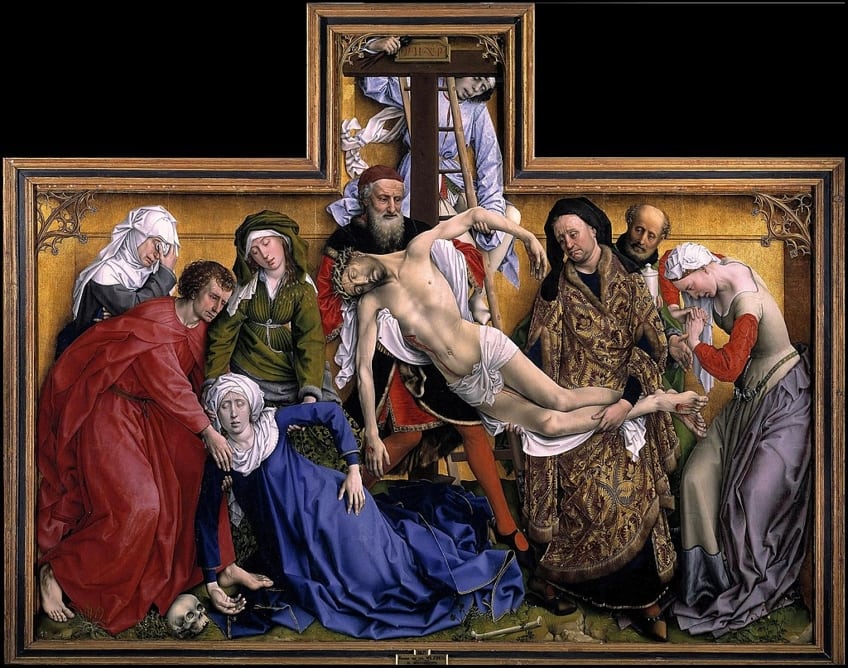 The Cultural Backdrop to the Northern Renaissance

When did the Northern Renaissance start? This is a tricky question to answer, but it is thought to be around the 15th Century. Like any significant art movement, in the north, Renaissance art was the product of the social and cultural climate in Europe during the 15th and 16th Centuries.

Advances in technology, the weakening of the Catholic Church, and a shift away from feudalism created the unique environment in which Northern Renaissance art could flourish.

During the 1500s, a revolution in religious theology flew through the northern parts of Europe. The Protestant Reformation mirrored the Northern Renaissance time period and the two are connected by more than similar timelines.

The Protestant Reformation produced a religious divide between Southern and Northern European Countries. Protestants adamantly rejected the power over religious worship held by the Catholic Church. In a time of almost global illiteracy, Latin scripture and theology were only available to the masses through a select few religious leaders. The Catholic Church, as it is still today, was immensely powerful. Rich and glorified paintings of Christ and the passions adorned the walls of enormous churches, which was undoubtedly intimidating for the average Joe.

The Protestant Reformation vehemently rejected everything that the Catholic Church stood for. Protestant theology placed the individual worshiper and their relationship to God at the center of religious practice. Salvation from sin no longer came from indulgences (paying the church for forgiveness) or personal deeds but could only be granted by God.

As a result, the Northern Renaissance art by Protestant artists was far more secular, preferring to depict landscapes, still-life scenes, and historical pieces. Protestant artists did still produce some religious paintings, but the subject matters were more secular. These paintings depicted the individual’s relationship to god, moralistic depictions of modern life, and narrative scenes from the bible.

For Protestant artists of the Northern Renaissance, the divinity of God existed in all of nature. So, the depictions of landscapes and people were exacting in their naturalism and realism.

In line with the Protestant belief that religion should be a personal relationship with God, artists from the Northern Renaissance time period created smaller, at-home religious pieces. Rejecting the idea that a select few should mediate one’s relationship with God, the Northern Renaissance saw an increase in mass-produced and low-cost religious images. The 1448 invention of the printing press helped this diversification of religious agency. Artists could bring Protestant theology to the masses with ease through prints.

The Fall of Feudalism

For a thousand years, feudalism was the dominant social structure throughout Europe. The beginning of both the Italian and Northern Renaissance saw a gradual decline in feudal social arrangements. Feudalism’s decline opened the doors for the changes in culture, society, and economics associated with the Renaissance. There are several reasons for the waning grip of feudalism during this period. 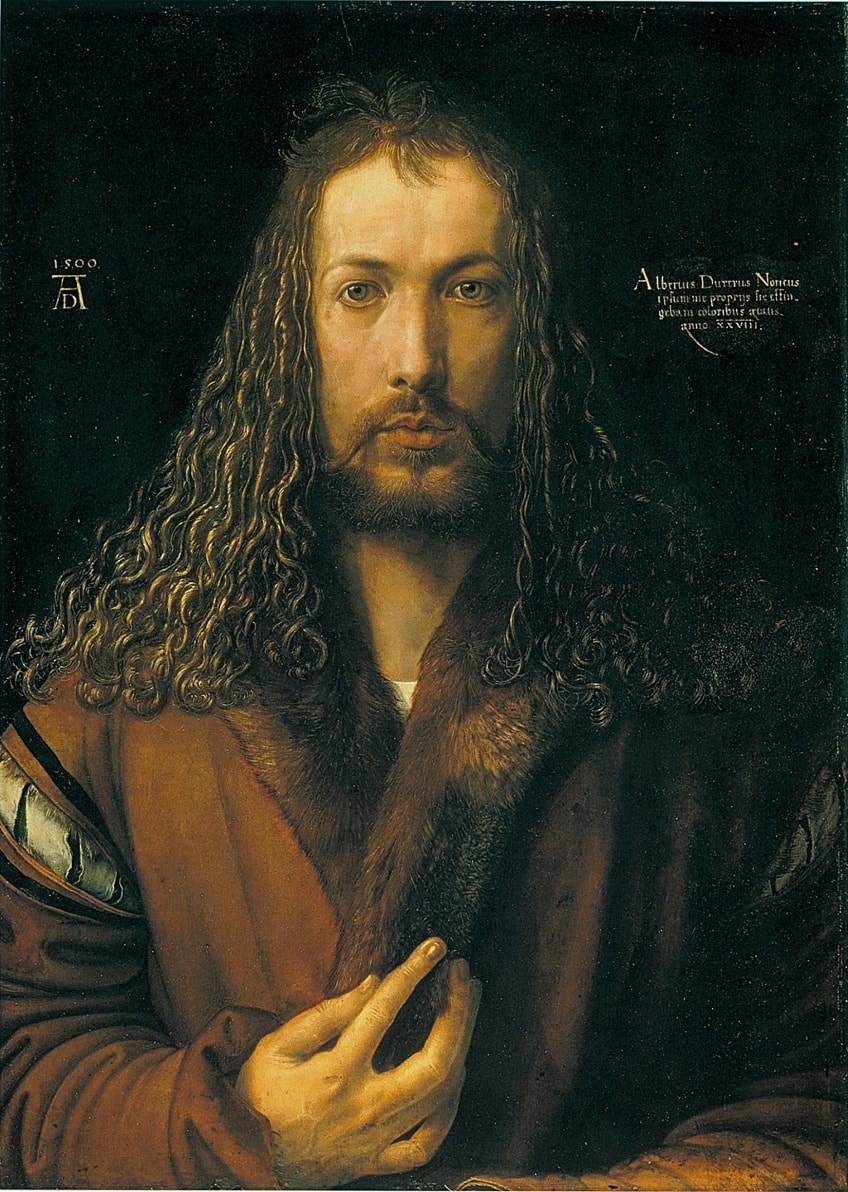 Artistic Advances of the Northern Renaissance

The Northern and Italian Renaissance periods have a commonality in their role in the social and cultural progression that took Europe out of the Middle Ages and set the stage for modernity. The Northern Renaissance saw significant advances in oil painting techniques, realism, and printmaking technologies.

Jan van Eyck is considered one of the prominent figures in the Northern Renaissance, and he was at the forefront of experimentations with new painting techniques. Tempura paint, a mixture of pigment and egg yolk, was the most popular paint amongst artists of the Middle Ages.

The Age of Realism

Precise observation was the basis for Northern Renaissance art. Artists tried to find the root of existence by capturing the natural world in intricate detail. Northern Renaissance realism paintings explore depth, contour, color, and perspective. The observational approach to realism painting allowed artists to capture the way colors fade towards the horizon, how the contours of shapes dissipate with distance, and how perspective influenced depth.

Northern Renaissance artists developed color and aerial perspectives long before Leonardo. The golden age of Dutch Realism had its basis in the Netherlandish focus on intricately detailed everyday events.

Portraits, landscapes, and visual narratives of everyday events like the weddings of peasants were popular subjects. Northern Renaissance artists took inspiration from the lived realities of peasants and artists in the modern world. 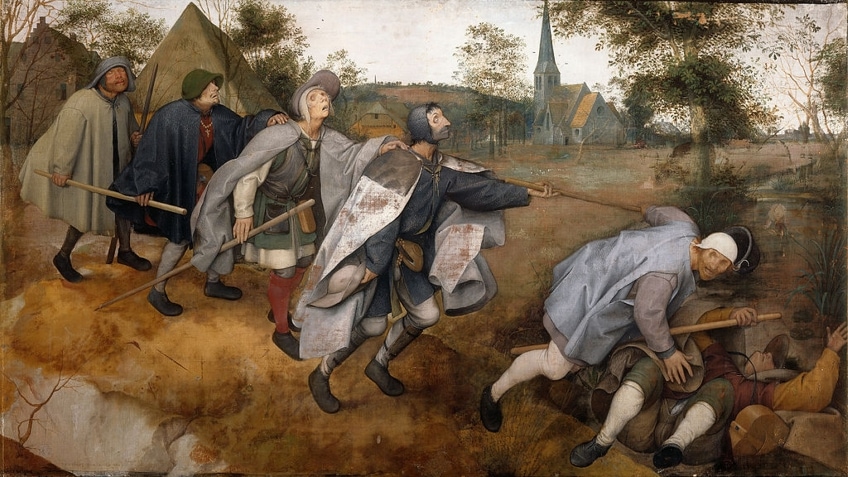 The Parable of the Blind Leading the Blind (1956) by Pieter Brueghel the Elder; National Museum of Capodimonte, Public domain, via Wikimedia Commons

The Importance of Printmaking: More Than Artistic Expression

The significance of the explosion in popularity and productivity of printmaking lay in more than pure artistic expression. While art and images were previously unavailable to everyday people, the advent of printmaking made art much more available to the masses. The Protestant Reformation, as we have already discussed, took advantage of printmaking. Prints, pamphlets, books, and engravings were widely distributed. Art became popular among the masses for the first time because of printing developments.

There are a few famous artists who really exemplify the Northern Renaissance style. Although the Northern Renaissance came to a close in the 18th Century, the advances in oil painting techniques and realism laid the groundwork for many art movements that followed. There is no better way to get to grips with an art movement than by exploring the works of prominent artists.

Of all Northern Renaissance artists, Netherlandish Jan van Eyck is the most celebrated both during his time and today. For several years, van Eyck was an official painter in the Duke of Burgundy’s court. Jan van Eyck specialized in naturalistic panel paintings that were predominantly religious subjects and portraits. As was typical of art in the Northern Renaissance, van Eyck often covertly used religious symbols.

This piece is one of van Eyck’s most famous works of art. The portrait is of Giovanni Arnolfini, an affluent business man, and his new wife. There are theories that this painting depicts the Arnolfini wedding, but these theories are generally discredited. Instead, most art historians consider this portrait to be a visual expression of Arnolfini’s wealth. This double portrait of the couple, decked out in luxurious fabric, is probably the first secular portrait of the Northern Renaissance era.

Despite the lack of religious iconography in the foreground of the painting, you can see the subtle sign of Christ’s passions in a convex mirror in the background. Just above this mirror, you will also note that van Eyck signed his name. While this has been customary practice for the last few centuries, van Eyck and his contemporaries were some of the first painters to sign their art. 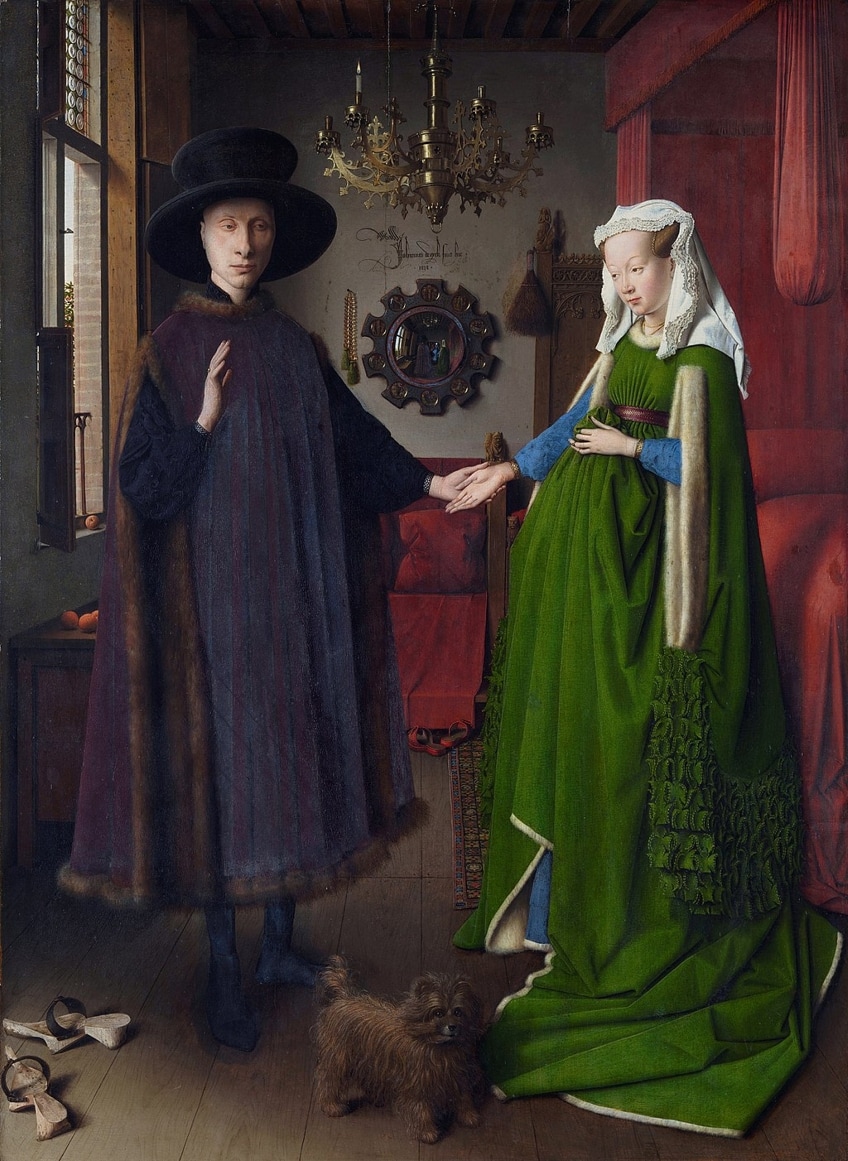 While the Arnolfini Portrait has only subtle religious indications, van Eyck’s Ghent Altarpiece is jam-packed with theological meaning. The polyptych is painted on both sides with naturalistic representations of a heavenly world. The painting portrays an enormous swath of biblical narratives, although the religious iconography is mysterious.

The Protestant belief of an individual relationship to God is emphasized in several ways throughout these panels. In the upper panel, you can see Saint John the Evangelist holding an open book on his lap, raising his right hand, and looking towards Christ. Similarly, in the top left panel, we can see the Virgin Mary, gazing intently upon a religious book in her hands. While Jan van Eyck is normally credited with this painting, it is thought that his brother, Hubert van Eyck, designed the altarpiece, and Jan painted it.

While the religious iconography was not novel, Jan van Eyck’s mastery of realism and oil painting techniques make this panel incredibly innovative for its time.

In fact, the level of realism is so profound that musical scholars have been able to figure out the exact note that each angel is singing from the shapes of their mouths. When van Eyck first revealed this painting, it was hailed as the singular work that captured the spirit and style of the Northern Renaissance. As a result, this piece has been stolen countless times throughout its history. 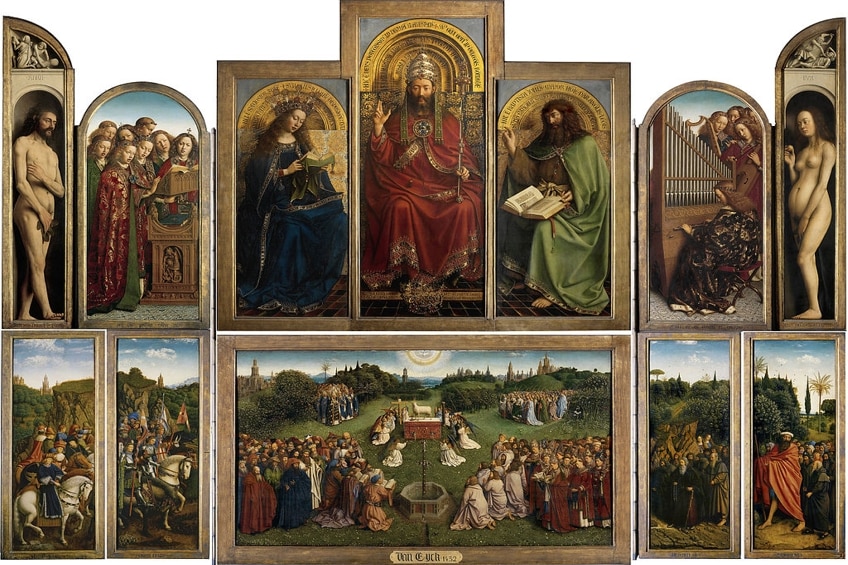 Some art historians believe that Campin may have studied under van Eyck. By 1419, Campin was the famed owner of a significantly sized and profitable workshop. Campin’s early panel paintings show a late Gothic influence combined with the impeccable realism he achieved with oil paints. 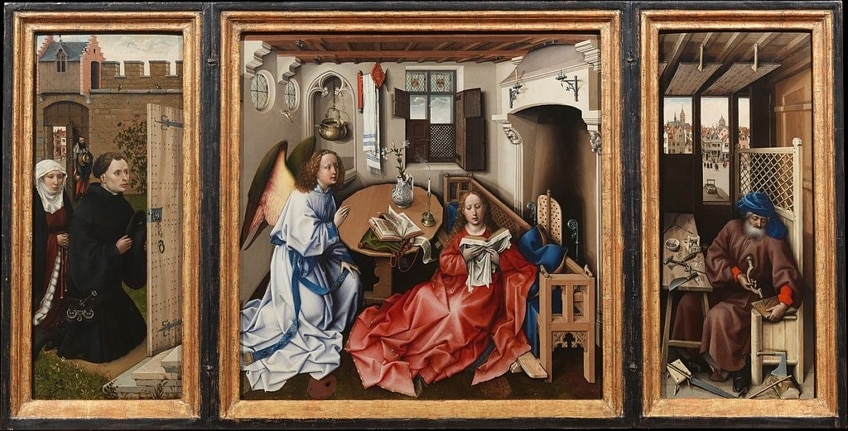 This triptych of oil-painted panels is one of the most significant and celebrated pieces to emerge from the Northern Renaissance. The painting is typical of the motif of Northern Renaissance religious paintings, depicting a biblical scene in a naturalistic space that is not obviously religious. The left panel of the triptych captures kneeling donors in a garden. The central panel depicts the Annunciation to Mary of her pregnancy, set in a domestic and contemporary space. The final right panel pictures the carpenter, Saint Joseph.

As the panel painting is not signed, art historians have struggled with attributing the work to any single artist. While the consensus is that the style is characteristic of Campin, we still are not certain whether he painted the whole altarpiece himself. As was common during the Northern Renaissance, Campin had a workshop of apprentices who aided in his paintings. While many now attribute this work to Campin, we remain unsure about the extent to which he actively worked on this famed piece.

Born in Brabant, Hieronymus Bosch was a Netherlandish Northern Renaissance painter known for his excellent paintings of religious narratives and concepts. We know little about his life, but Bosch’s collection of paintings spans Spain, the Netherlands, and Austria. There have been countless copies of his artwork, his nightmarish and grotesque depictions of hell in particular. Bosch’s fantastical panoramas featuring crowds of figures that are often bizarre and outlandish are incredibly distinctive. 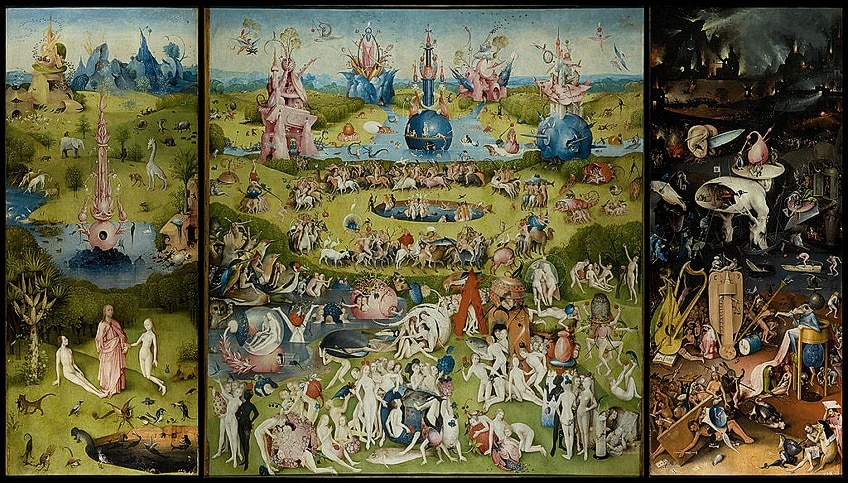 This painting is complicated and extensive, with so much happening it can be dizzying to know where to look first. This is a prime example of Bosch’s distinctive style. The center panel pictures what appears at first to be a paradise. On closer inspection, however, the panel is imbued with symbols of the sin of lust. The left panel presents Adam and Eve in the garden of Eden with God in the foreground. The right panel, in contrast, is a grotesque depiction of the punishments of hell.

Each panel contains strangely grotesque non-human characters, and a landscape that is equally bizarre and unnatural. Looking at this painting, you could be fooled into believing it is a Surrealist work. Art historians are at odds on the possible interpretations of this piece. Is it a moralistic warning of the dangers of sinful human lust, or is it a narrative of a lost paradise?

The Northern Renaissance can be thought of as the precise amalgamation of shifting religious ideals, advances in artistic technologies, morphing social structures, and distinctively late Gothic sensibilities. To understand how the Northern Renaissance and Italian Renaissance existed in parallel, we need to understand the context of a Europe grappling with numerous social, religious, political, and technological changes. Art history is always so much more than examining trends in artistic styling. Human consciousness and the art it creates is far more complex and far more interesting than it appears on the surface. 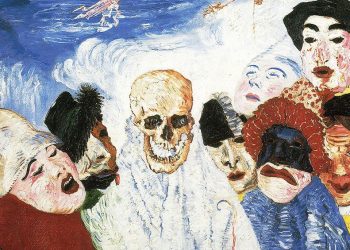 Symbolism Art – Learning About the History and Artworks of this Movement 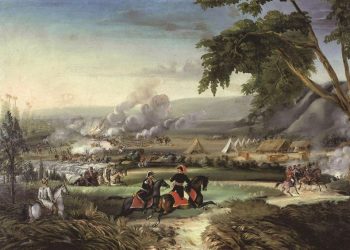 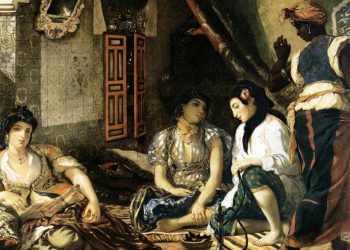 Get Informed About our Latest Art History Articles