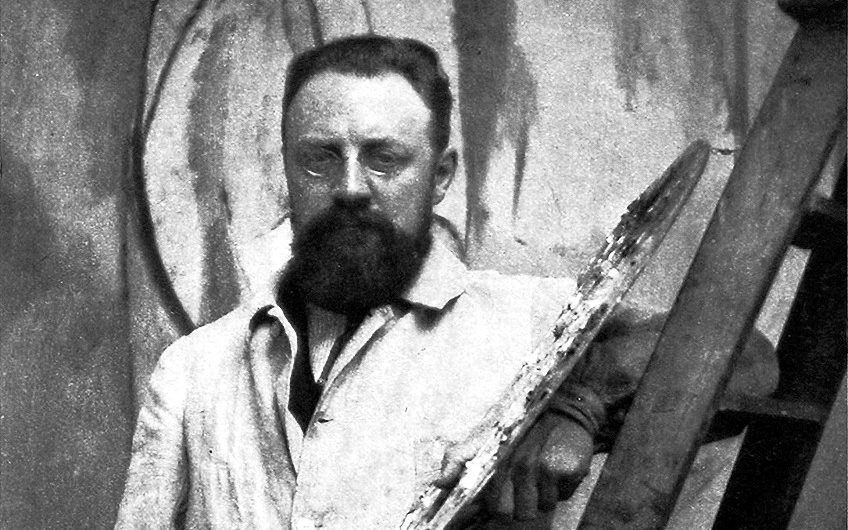 When Leo Stein saw the painting Woman With a Hat by Henri Matisse, he reportedly said it was “the nastiest smear of paint”. Although this painting may have received considerable critique for its look, it nonetheless became an important emblem of 20th-century modern art. We will discuss this painting further in the article below.

Artist Abstract: Who Was Henri Matisse?

Henri Matisse was born on December 31, 1869, and lived until November 3, 1954. He was born in Northern France in Le Cateau-Cambrésis. He initially studied law and briefly worked in this field, but it did not work out for him, and he soon started painting and pursued an art career, which was during 1891. 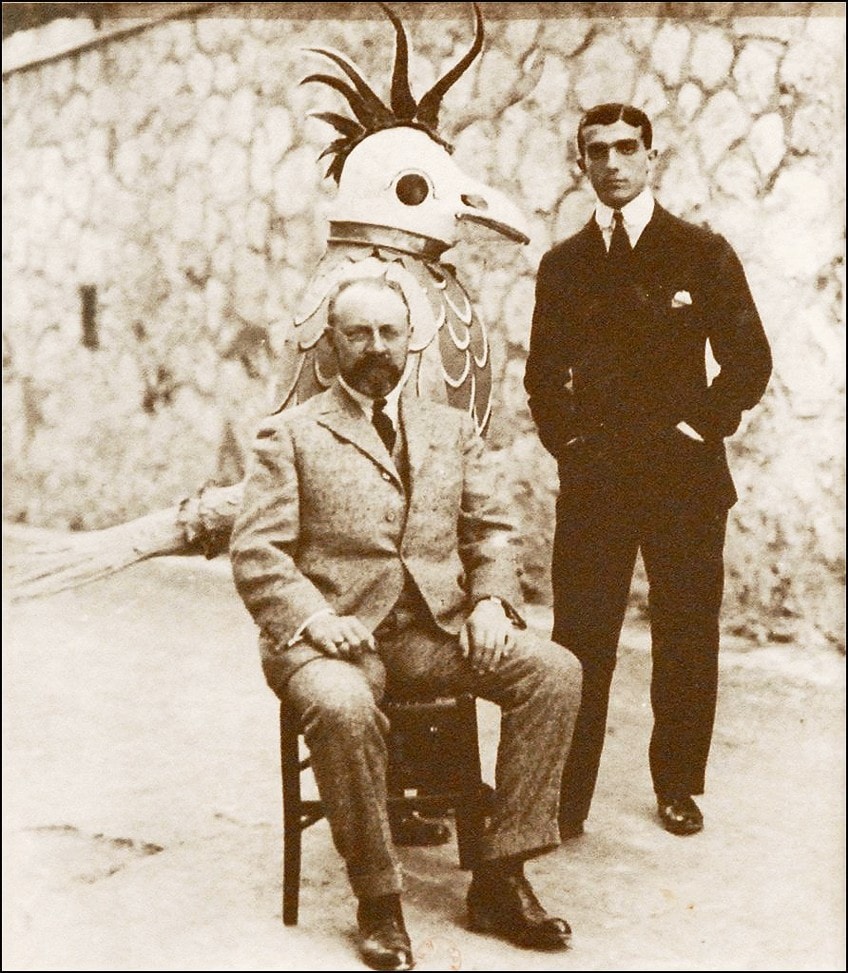 Photograph of Henri Matisse (seated) with Léonide Massine preparing Le chant du rossignol. The ballet debut occurred on 2 February 1920 at the Théâtre National de l’Opéra in Paris. Massine did the choreography and Matisse did the sets, costumes, and curtain designs; Jean-Pierre Dalbéra from Paris, France, CC BY 2.0, via Wikimedia Commons

He studied under artists like Gustave Moreau and John Russell and was influenced by different styles of art ranging from still lifes to Impressionism. Matisse was also influenced by the Post-Impressionism style and how color was utilized, which eventually formed into Fauvism, a style started by him and André Derain.

Woman with a Hat (1905) by Henri Matisse in Context

Below we will explore Henri Matisse’s Woman With a Hat, otherwise, La Femme Au Chapeau, the woman in question was Henri Matisse’s wife, Amélie Parayre. We will start with a brief contextual analysis discussing the Fauvism art movement, of which this painting was at the heart of its inception and characteristic “wild” style.

We will then provide a formal analysis, discussing the subject matter in more detail as well as various stylistic elements employed like color, texture, line, form, shape, and space all of which compose this portrait of a young woman with a blue hat.

The first Fauvism art movement was held in 1905 at the Salon d’Automne art exhibition in Paris. It featured several artworks by artists like Henri Matisse, André Derain, and others like Maurice de Vlaminck. The artworks were vibrant and vigorous in their display of color and brushwork, notably the painting of the Woman With a Hat by Henri Matisse.

Louis Vauxcelles, who was a French art critic, wrote about it in the French periodical/newspaper titled “Gil Blas”, published on October 17, 1905.  He has been widely quoted by numerous art sources as describing the exhibition as “Donatello chez les fauves”, which means “Donatello among the wild beasts” in French. 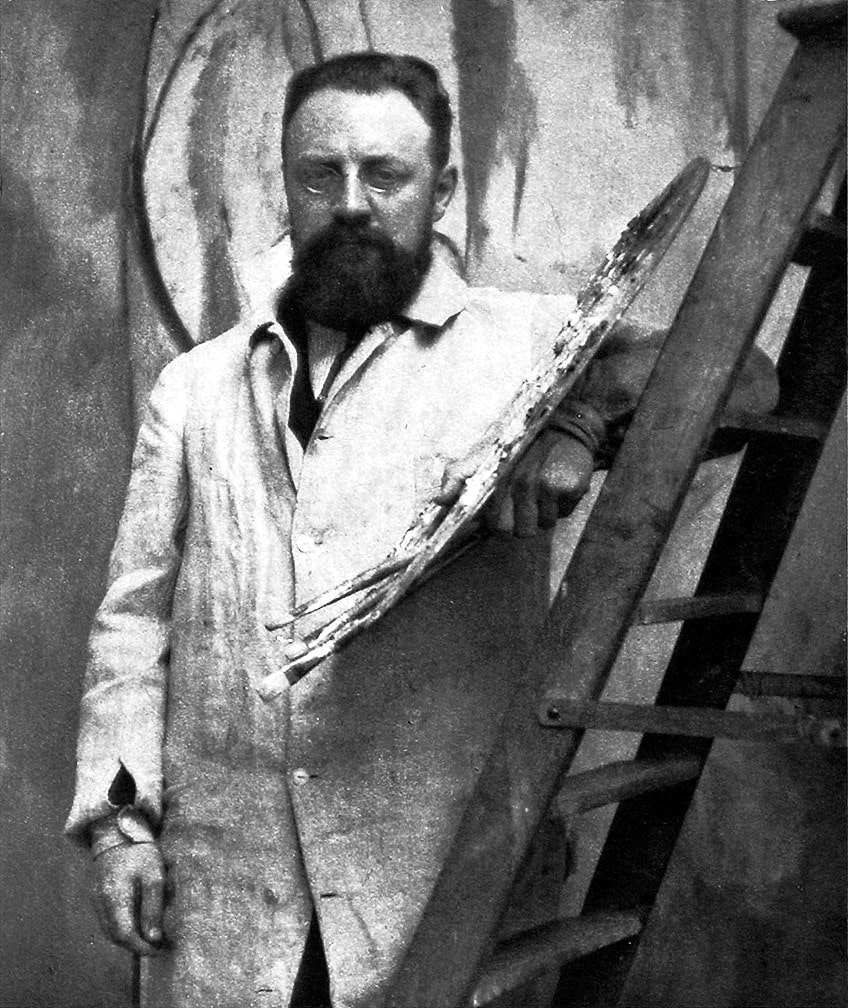 The art critic Camille Mauclair, has also been widely quoted, describing artworks as, “A pot of paint has been flung in the face of the public”. There was a distinct stylistic change among the Fauvist artworks on display and this elicited varieties of reactions from the public and critics alike. The term “Fauves” was used after Vauxcelle’s commentary mentioned above to name the group of artists.

Their style was more expressive, characterized by their brushwork, they utilized color without reliance on the subject to determine it, and colors were more striking, oftentimes leading to what has been described as “flat” pictorial surfaces.

The formal analysis below will first provide a visual description of the subject matter and then continue discussing artistic elements like color, brush strokes, and texture, which were significant trademarks of not only Henri Matisse’s paintings but Fauvism as an art movement.

In Woman With a Hat by Henri Matisse, we see Amélie, the artist’s wife. She is either sitting or standing in a pose where her head is slightly turned towards her right-hand side and she seems to gaze in our direction, both her eyes are directed towards her right, which is mostly towards our left of the composition.

Her right wrist area is resting on what appears to be the top of a what could be a walking stick and in her right hand is a yellow fan. Her left hand appears to be resting in her lap, apparently without a glove on it.

Her outfit has been categorized as common to the bourgeoisie, namely, her styled hat, under which we can see a small bit of her brown hair, the glove on her right hand, the accompanying fan, as mentioned above, and her dress, of which there is a belt around her waist.

Her facial expression appears neutral and serious, she does not appear jovial in any way, and this was probably a fitting expression for the portrait painting.

Color in the Woman With a Hat painting is interchanged with the subject matter, making it a significant component of the composition. Amélie’s dress is painted in a myriad of colors like blues, greens, some reds, orange, and yellow, all intermixed.

Many art sources also quote what Matisse said about the color of Amélie’s dress when he was asked about it, he replied that it was “Black, of course”.

Her hat is also depicted in various colors, with most of it having tones of blue. Her skin tone is a mixture of what appears to be light pastel blues, yellows, greens, and pinks. Her upper lip is a brighter orange-red, possibly indicating how the shadow falls on her mouth. Her eyes are dark, appearing almost black, and her eyebrows are dark brown.

The background is multi-colored too; the upper portion appears lighter with cooler colors like blues, greens, and purples. This is in contrast with the lower third portion of the background, which has warmer shades of red and orange.

Texture is created by Matisse’s vigorous and expressive use of brushstrokes; we can see the physical texture of the paint on the canvas in short, choppy, long, thick, and thin brushstrokes. Reportedly, some also thought the artwork was “unfinished” because of Matisse’s method of applying paint and color.

Matisse’s portrait, along with many of his other works in this Fauvist style, is not shy of dark outlines and open brushwork that allows forms and shapes to play freely around the canvas. The physical appearance of the paint and brushwork contributes to the shapes and forms of the subject matter.

There is not a lot of depth or three-dimensionality depicted in Matisse’s portrait of a young woman with a blue hat. While she composes most of the space, it is almost as if she and the background have become one.

This is due to the stark contrasting effect of colors.

It is believed that the Woman with a Hat painting was bought by Gertrude Stein and her brother, Leo Stein, for 500 Francs. However, some sources state that Sarah Stein initially bought it, she was married to Michael Stein, who was Gertrude and Leo Stein’s brother.

Reportedly, Woman with a Hat by Henri Matisse was one of his first paintings where his style shifted into more free and expressive techniques. 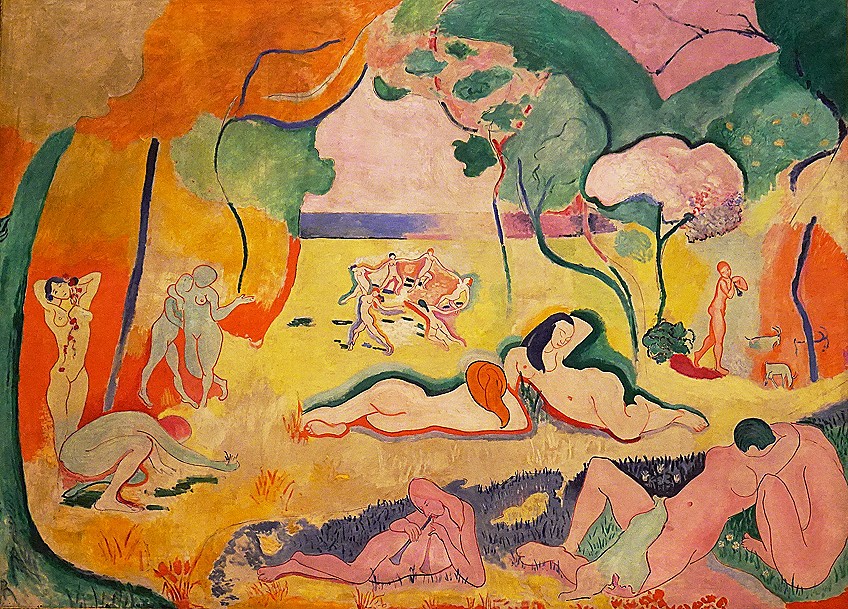 Before Matisse painted Woman with a Hat, he previously explored different styles such as the Neo-Impressionistic Pointillism. This can be seen in Matisse’s painting, Luxe, Calme, et Volupte, which he painted between 1904 and 1905.

The French word “Fauves” means “wild beasts” and Henri Matisse’s artistic oeuvre was filled with colors, texture, and wild abandon, undoubtedly making him one of the forerunners, and certainly one of the “wild beasts”, at play in a changing landscape of art and culture. We have come face-to-face with this changing landscape in his seminal artwork discussed in this article, “Woman with a Hat”.

Who Painted Woman with a Hat?

Henri Matisse painted Woman with a Hat in 1905. He was one of the leaders of the emerging art group called the Fauves, which is a French word meaning wild beasts. The woman who posed for Matisse was Amélie Parayre, who was his wife.

Why Was the Painting of the Woman with a Hat by Henri Matisse Important?

Henri Matisse’s painting Woman with a Hat (1905) was one of the first paintings exhibited that started the Fauvism art movement. It was a revolutionary painting because of the different painting techniques utilized, especially in terms of color and brushstrokes.

Where Is the Painting Woman with a Hat by Henri Matisse?

The Woman with a Hat (1905) painting by Henri Matisse is now housed at the San Francisco Museum of Modern Art (SFMOMA). Reportedly, Elise S. Haas donated this painting, along with many other artworks, to the museum in 1990/1991.