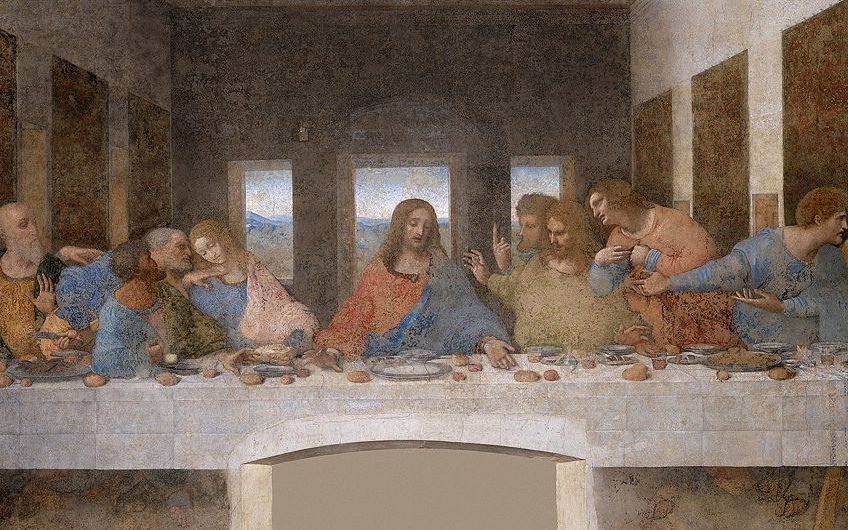 The image of The Last Supper is easily on the list of the most recognizable artworks in history. It is admired by many art lovers and critics alike and has been studied intricately by many art scholars and historians for hundreds of years. In fact, this is one of the most reproduced paintings in the world. It is truly an enigmatic piece of work, painted by one of the world’s greatest artists, Leonardo da Vinci. In this article, we will take a deeper look at a few interesting facts about The Last Supper.

An Introduction to The Last Supper

“The Last Supper” was painted by Leonardo da Vinci, an Italian painter, engineer, and draughtsman from the High Renaissance period. 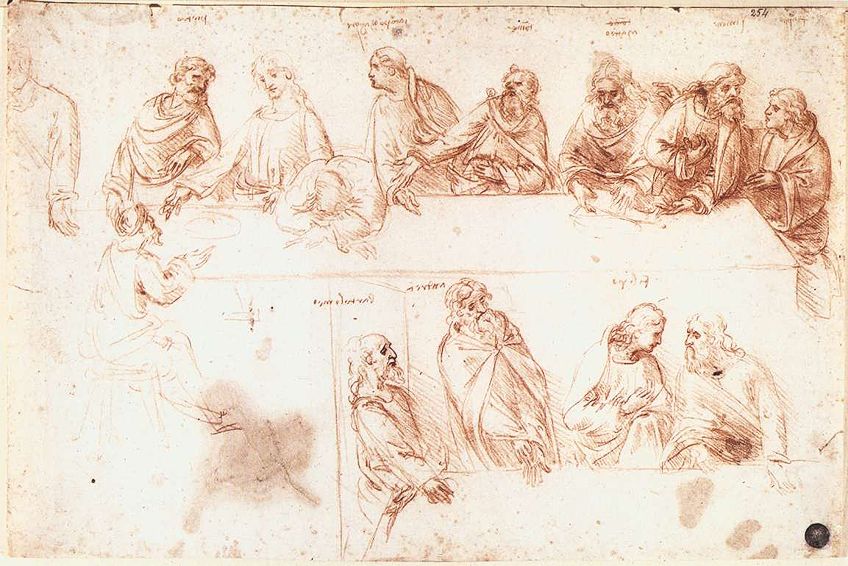 Initially known for his paintings, da Vinci became an icon due to his notebooks, which depicted numerous subjects such as astronomy, anatomy, paleontology, and botany. Leonardo da Vinci is regarded as the father of the High Renaissance and one of the most highly respected artists throughout art history.

The Last Supper was painted between 1495 and 1498 as part of a commission to renovate the church and its buildings for Ludovico Sforza, Duke of Milan. The mural depicts the scene of the supper at which Christ reveals to his disciples that one of them would betray him. Despite the many attempts at restoration over the centuries, much of the original has been destroyed due to environmental factors. 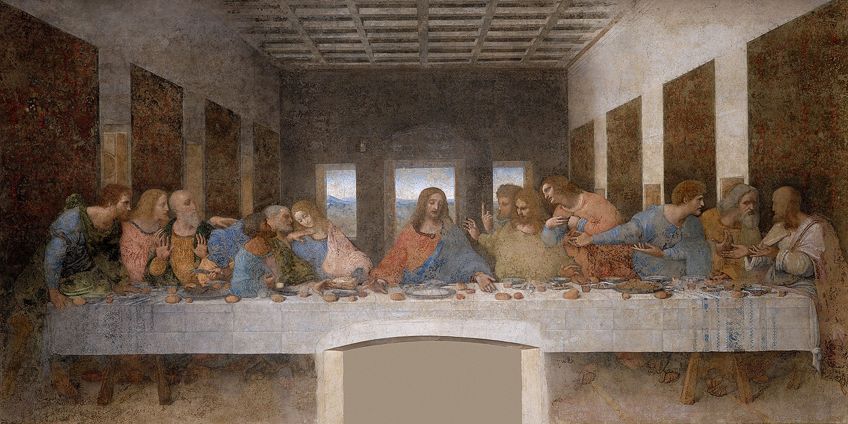 13 Fascinating Facts About The Last Supper

Leonardo da Vinci started work on the mural sometime around 1495 and finished it in 1948. It is housed at the Covenant of Santa Maria Delle Grazie, a church situated in Milan, Italy. Now that we have covered some of the basic facts about The Last Supper, let’s take a look at a few more interesting facts about this beautiful masterpiece.

This famous mural does not only depict the last time Jesus would eat with his disciples before being captured and sentenced to crucifixion but also portrays the moment he reveals to them that he knows one of them will betray him. Da Vinci wanted to capture the moment of shock and rage experienced by them after hearing of this betrayal. Jesus can be seen with a glass of wine and bread, which would become important symbols that were attached to Christ.

It Will Never Be In a Museum

Although it has been reproduced countless times in many sizes, the original painting is much larger than many people think, being 15 feet by 29 feet in diameter. It would be almost impossible to move it from its place in the convent in Milan. Painted on the wall of the dining room of the Santa Maria Delle Grazie in 1945, it is too big and frail to be moved anywhere.

It Is Not Considered a Fresco Painting

For a painting to be considered a fresco, it would have needed to be painted on wet plaster. However, this traditional technique was disregarded by da Vinci for several reasons. For one, fresco paintings tended to be dull, and he was aspiring for a certain luminosity with this mural. The biggest issue for Leonardo da Vinci was that he felt that fresco painting put time constraint limitations on the process, as the work would have to be completed before the plaster dried. 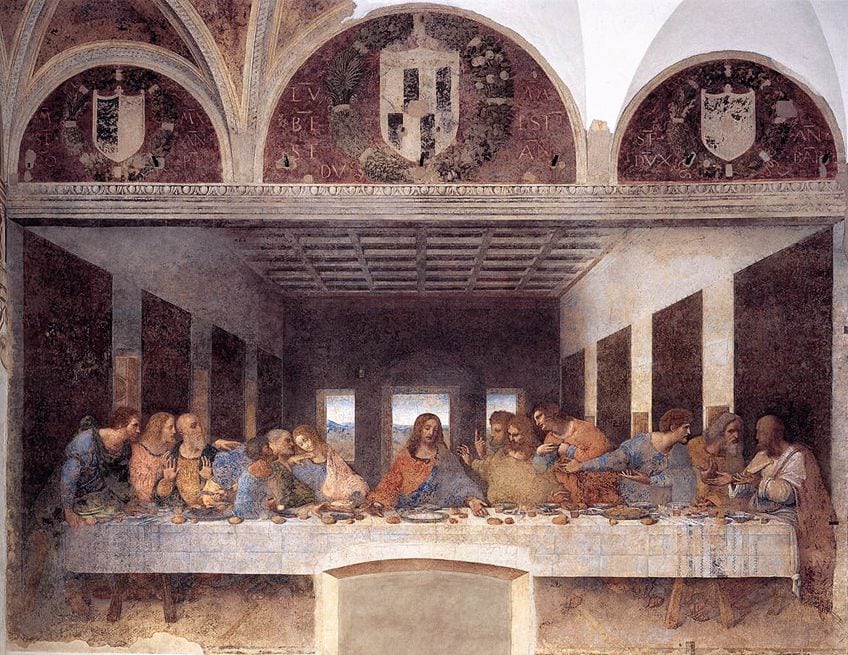 Leonardo da Vinci Had to be Innovative

Leonardo da Vinci had to use a new method on this masterpiece in order to create it. He did not want to be rushed for time so invented a technique of his own using stone and tempera paints. His technique included priming the surface of the wall in the hope that the priming solution would help the tempera bind to the wall and protect it against deterioration from moisture.

Not Much of Leonardo da Vinci’s Original Art Remains

Despite Leonardo da Vinci’s attempts at innovation, hiss new method did not succeed. By the early 1500s, the painting was already starting to show signs of flaking and decay. Within 50 years, it was barely in any state that resembled its former grandeur.

Attempts at restoration in the early years just worsened it.

During World War II, allied bombings caused intense vibrations that shook the building and caused even further damage. By the time the 19-year restoration began in 1980, much of the original paint had already been lost. A lower piece of the painting, including Jesus’ feet, was destroyed when a door was added during renovations in 1652.

Much of the positive critique of this masterpiece involves the unique angle from which it is painted. The perspective creates the sense of inviting the viewer into the scene and was achieved using nails, string, and a hammer. Da Vinci would hammer nails into the wall and then use pieces of string as guides between the nails to create construction lines, which would help him to achieve the correct perspective. 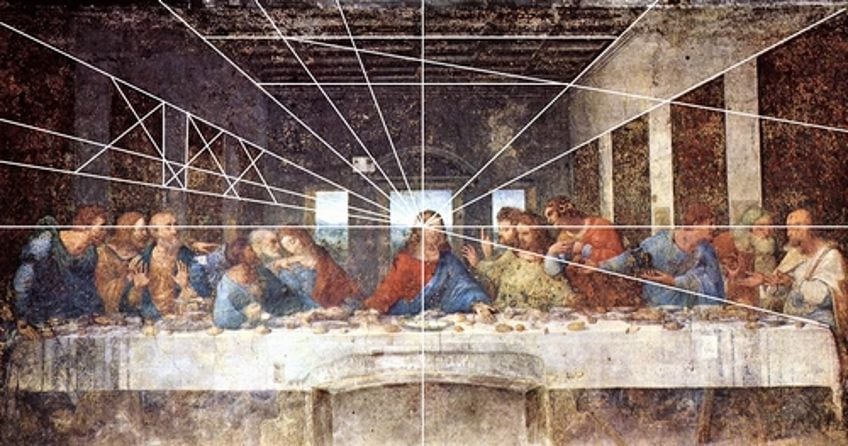 Thomas can be seen standing in profile with his finger held up to the right of Jesus. It has been suggested that this is a subtle reference to a moment that would be important later in the story of Christ. Many scholars believe that da Vinci intentionally drew attention to the raised finger as it is the same finger that Thomas would use to probe the wounds of Jesus when he had doubts over his own vision upon the resurrection of Christ.

Scholars believe that every disciple in the composition was based on a real-life model. Leonardo da Vinci wanted Judas to look like someone that had the features of a deceitful and hardened person. It is believed that he searched through the jails of Milan to try to find the perfect model on which to base Judas. 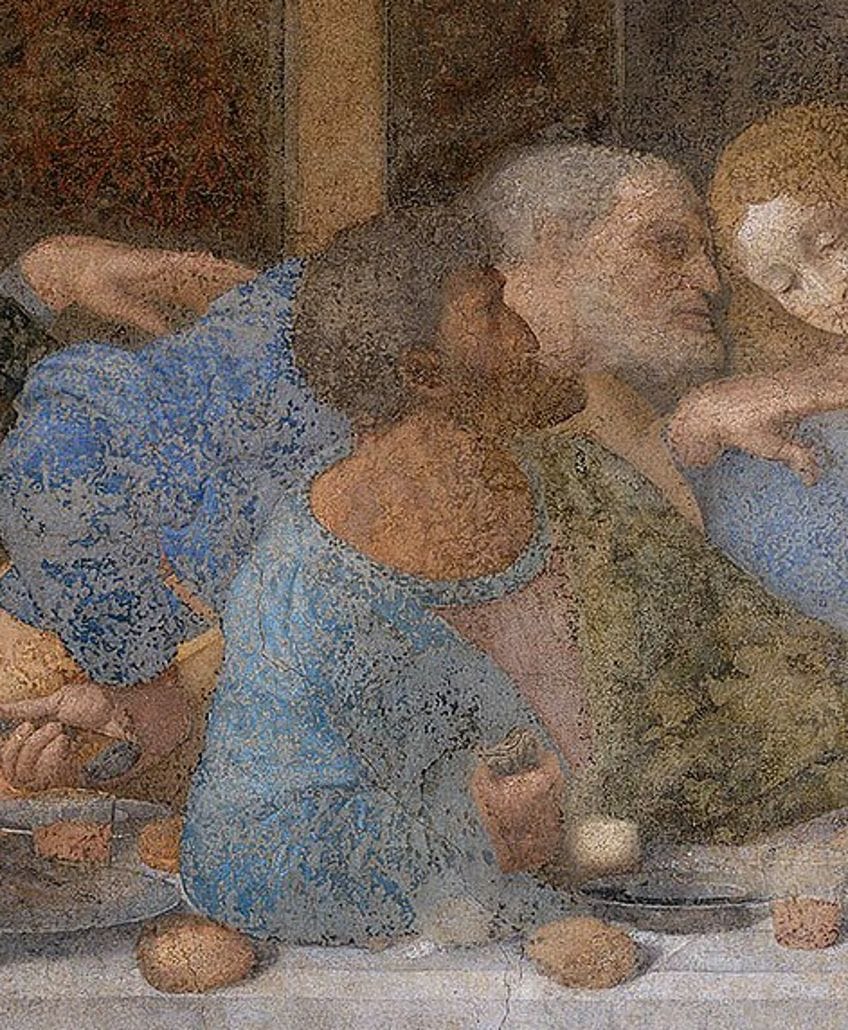 What the Food Symbolizes Is Still Up For Debate

Nothing in the painting is thought to be placed there without intention, and scholars do not always agree as to what these objects were meant to represent. For instance, there is salt spilled before Judas. Some people argue that it symbolizes his betrayal, whereas others believe that it represents his bad luck at being chosen to betray Jesus. Many view the fish with similar discrepancies.

Some argue that it the fish is an eel, which symbolizes faith and indoctrination, while others believe it is a herring, symbolizing deceit and non-belief.

It Has Served as Inspiration for Some Crazy Theories

Lynn Picknett and Clive Prince wrote a conspiratorial book called The Templar Revelation, in which they have put forth the theory that the person standing to the left of Jesus is Mary Magdalene and not John. They have suggested that the painting contains evidence of a cover-up by the Catholic Church around the true identity of Jesus.

In another theory, some musicians have suggested that there is music encoded into the art. Giovanni Maria Pala, an Italian musician, created a song that supposedly was based on musical notes hidden in the composition of the painting.

Created in 2007, the song is around 40 seconds long and has been described as somber in mood.

In yet another theory, Sabrina Sforza Galizia, a Vatican researcher, proclaimed that she had deciphered an astrological and mathematical translation of the painting, stating that it represented symbols of the end of the world. Her predictions included an apocalyptic deluge that would cover the earth from March until November in the year 4006.

It Has Influenced Popular Culture and Fiction

The most popular work of fiction based on this famous painting would undoubtedly be Dan Brown’s novel The Da Vinci Code. This is not the only work of fiction surrounding the painting, however. For many years, part of the mythology of the painting was the often retold story that when da Vinci finally found the perfect model for Judas in jail, it turned out to be the same model that he had used for painting Jesus, who had grown hardened and haggard from his life as a criminal. 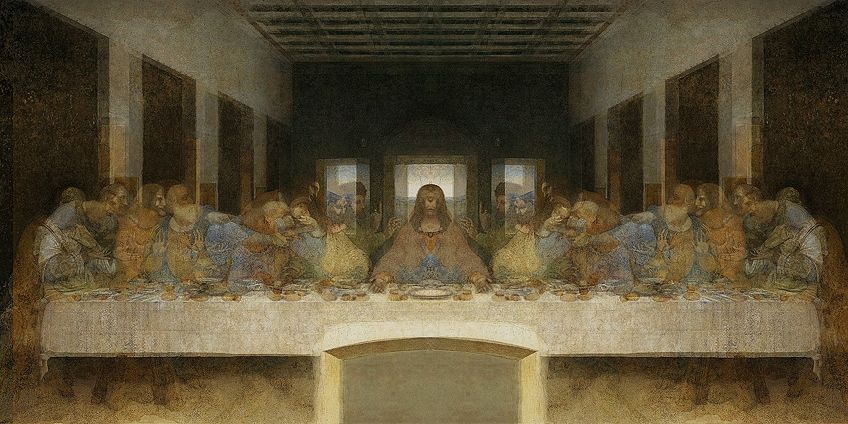 As poetic as this story may have been, it turned out to be false. They believe it to be untrue as the painting took three years to paint, during which time his model would unlikely have gone through such a drastic change in appearance.

The parable of decay was also an old moral tale that had most likely been attached to the painting to give it more spiritual weight and historical validity.

It Has Been Copied for Centuries

The Last Supper has been the source and inspiration for countless parodies and imitations in pop culture and fine art for hundreds of years. During the 16th century, many renditions of the masterpiece were created using oil on canvas. Interpretations have since been created by many famous modern artists such as Pop artist Andy Warhol, surrealist Salvador Dali, and Susan Dorothea White. 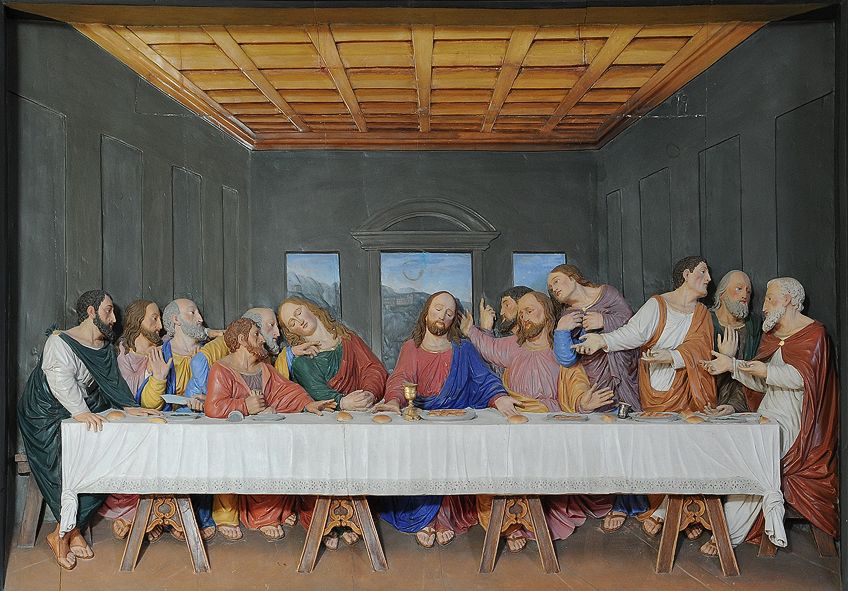 A notable example was one made out of chocolate syrup by Vik Muniz. This painting has been the driving plot point behind many works within popular culture, such as in the 2003 novel by Dan Brown, The Da Vinci Code, and the science fiction fantasy series Futurama, as well as featured in movies such as History of the World, Part 1, Inherent Vice, and Viridiana.

It Is Not Easy to See The Last Supper in Person

The original mural was painted in a small convent in Milan. It was never meant to hold crowds of great capacity. Despite being one of the most famous tourist destinations in Italy, it only has the capacity to hold around 25 people at one time, and the viewing period is limited to 15 minutes per person. If you do want to see the famous work of art when you are in Italy, then  be sure to dress appropriately and book at least two months in advance!

Today, we have learned 13 fascinating facts about “The Last Supper”. This masterful piece of artwork still survives today, but very little is left of the original paint. Unfortunately, despite many attempts at repairing the art, much of the work done either damaged the art even further or covered the original brushstrokes of the artist. However, the painting still remains a highly admired and celebrated masterpiece by master artist Leonardo da Vinci. We hope that you have enjoyed this list of “The Last Supper” facts and found it enlightening!

When Was The Last Supper Painted?

The exact date is not known to historians. However, Leonardo da Vinci started work on the mural sometime around 1495 to 1496. But how long did it take to paint The Last Supper? It is believed that Leonardo da Vinci was a meticulous worker, and it took about three years to complete the entire painting.

Where Is The Last Supper Painting Located Now?

So, where is The Last Supper painting located, you may ask? It is situated on the dining room walls of a convent called Santa Maria Delle Grazie, a church situated in Milan, Italy. It will always remain there because it is impossible to move due to the surface it was painted on and the frail nature of the materials.

Why Was The Last Supper Painted?

Ludovico Sforza commissioned the work as he wanted to renovate the covenant, and commissioned Leonardo da Vinci to paint the mural as part of the redecoration efforts. Despite da Vinci’s own efforts to treat the surfaces, the redecoration was fruitless and short-lived as it started to show signs of damage and deterioration only a few years after the renovations ended. Besides the necessity to redecorate the dining hall area, it was painted to inspire a feeling of awe and reignite the faith of the followers within the convent. The symbols depicted within the painting have held much meaning for Christians and scholars even up to the present day. 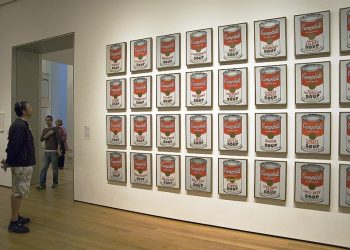 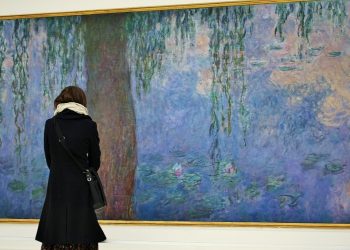 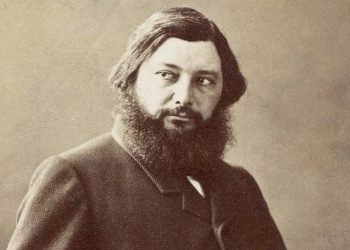