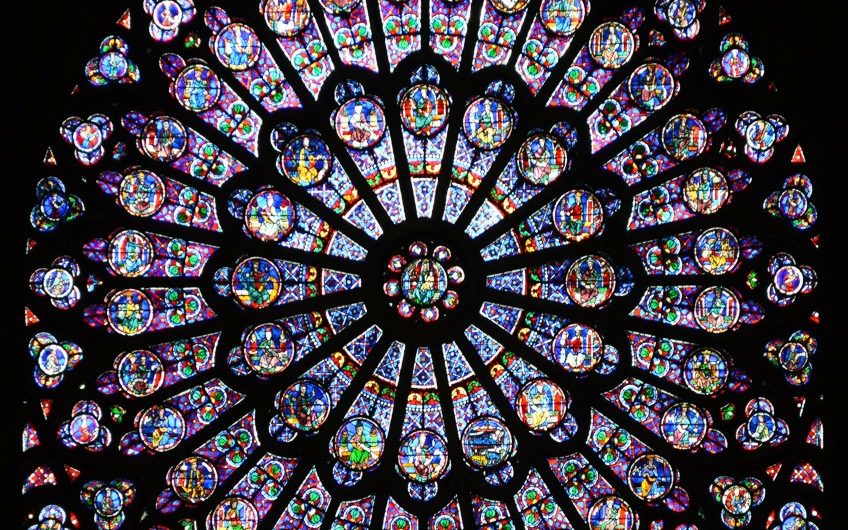 There are seemingly thousands of ways to repeat oneself in art, and in creatively beneficial ways. Repetition in art is one of the most effective techniques to create emphasis and meaning, and this article will discuss and further explore the question, “What is repetition in art?”

What Is Repetition in Art?

Repetition in art means that an art element like color, lines, shapes, or textures are repeated in visual compositions, and these can be in various sequences or patterns. It is also often defined as a “single element” that is repeated. In fact, repetition is also referred to as one of the principles of art, and it works closely with the other principles of art, namely pattern and rhythm.

Repetition seems like an innate tendency in human beings, to want to repeat designs or motifs because it adds a unique quality or statement to whatever the object might be.

It is one of the most versatile and intriguing techniques in art and has been utilized for centuries, whether for decorative, functional, or cultural purposes, ranging from tribal masks, Greek vases, interior spaces, and even tattoos!

However, it can also be applied and utilized to create meaning and add emphasis to an artwork, structure, sculpture, or installation piece. It creates a definition of the subject matter and evokes certain types of moods. It can also be utilized to create various optical effects or hint at social ideas of consumerism (think about Pop Art).

The Art Elements and Principles

Let us briefly go over them to provide more context.

The Seven Elements of Art

There are seven main art elements, namely value, color, texture, line, form, shape, and space. Each element can be utilized in various ways to compose a visual design, whether that is a two-dimensional surface like a canvas or a three-dimensional piece like a sculpture or installation.

For example, on a canvas, the art elements can inform the style, whether it is abstract or more naturalistic, compare for example the action paintings of Jackson Pollock, whose paintings are composed of paint strewn on large canvases, and created by textures, lines, and colors, for example, the famous Autumn Rhythm (Number 30) (1950). Pollock’s painting appears more abstract compared to a painting by Leonardo da Vinci, who utilized color, value, form, space, and line to create naturalistic figures, as seen in his famous Mona Lisa (1503).

Both artists are completely contrasting, illustrating the different and unique ways that art elements can create completely different worlds.

The Principles of Art

For example, a color can be applied in different repeated lines if the artist wants to create a sense of movement or rhythm. This can be seen in the famous painting, The Starry Night (1889), by Vincent van Gogh.

This is an example of how swirling lines can create a rhythmic effect and change the feeling and mood of the painting. 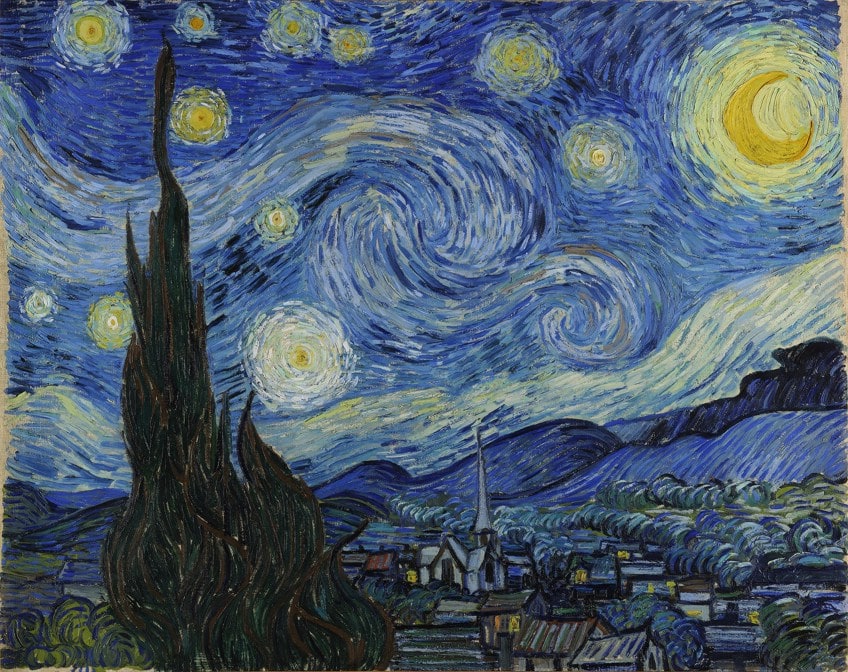 Repetition can also be applied as blocks of color. Think, for example, of Mark Rothko’s Color Field painting Ochre and Red on Red (1954), which depicts a yellow square at the top of the composition and a red square underneath, with a red background. There is a visual harmony created by the similarity and large area of colors, as well as a contrast because of the large area of yellow color against the red background.

Types of Repetition in Art

Now that you have more of an idea of what the art principles are, let us take a closer look at just a few of the common types of repetition there can be in art, which will be followed by several repetition art examples by some of the more well-known artists who utilized repetition.

Regular repetition occurs when elements are placed in an even manner and are also evenly spaced. Additionally, elements can be the same colors and have a general consistency. This has been described as creating a more calming effect when viewed because it is predictable and easy to follow.

Regular repetition art examples include Untitled (Stack) (1967) by the American artist Donald Judd. Here, the artist vertically arranged 12 galvanized iron rectangular box shapes against a wall. All are the same size and color, and the gaps or spaces between each “box” are nine inches.

Everything is evenly arranged in this installation, and the art element like color is congruent throughout, all the way to the shapes and material utilized.

Another regular repetition artwork includes the famous Campbell’s Soup Cans (1962) by the Pop Artist Andy Warhol. There are 32 canvases of the same size, measuring 50.8 x 40.6 centimeters) repeating the same subject matter, which is Campbell’s soup cans. The canvases are set against a wall in four rows of eight.

This artwork can also be said to bridge the gap, so to say, between regular and irregular repetition.

The only irregularity here is that each soup can is a different flavor, but there is a dominance of regular size, shape, and subject matter that gives it a predictability that is characteristic of the regular repetition mentioned above.

Irregular or random repetition in art is the opposite of evenly spaced elements, for example, elements will appear more unevenly spaced or arranged. This can range between any element like lines or shapes, which are placed in different sizes and lengths throughout the canvas without organization.

It will also be unpredictable.

Irregular repetition art examples include Untitled (1969) by Anni Albers, who was a printmaker and textile artist. This is a serigraph on paper depicting various blue triangles with a red background. The triangles are all irregularly spaced and positioned, which provides the composition with variety (another art principle), even though there is a similarity of shapes and color.

Another repetition artwork that depicts irregularity is in Composition with Yellow, Blue and Red (1937-1942) by the De Stijl artist Piet Mondrian. He also pioneered Neo-Plasticism, which sought to convey the simplicity of form through vertical and horizontal lines, as well as the primary colors including white, black, and gray.

In the above-mentioned repetition artwork, an oil on canvas, Mondrian depicts thick vertical and horizontal lines on the canvas, which creates an arrangement of varying sizes of squares and rectangles. 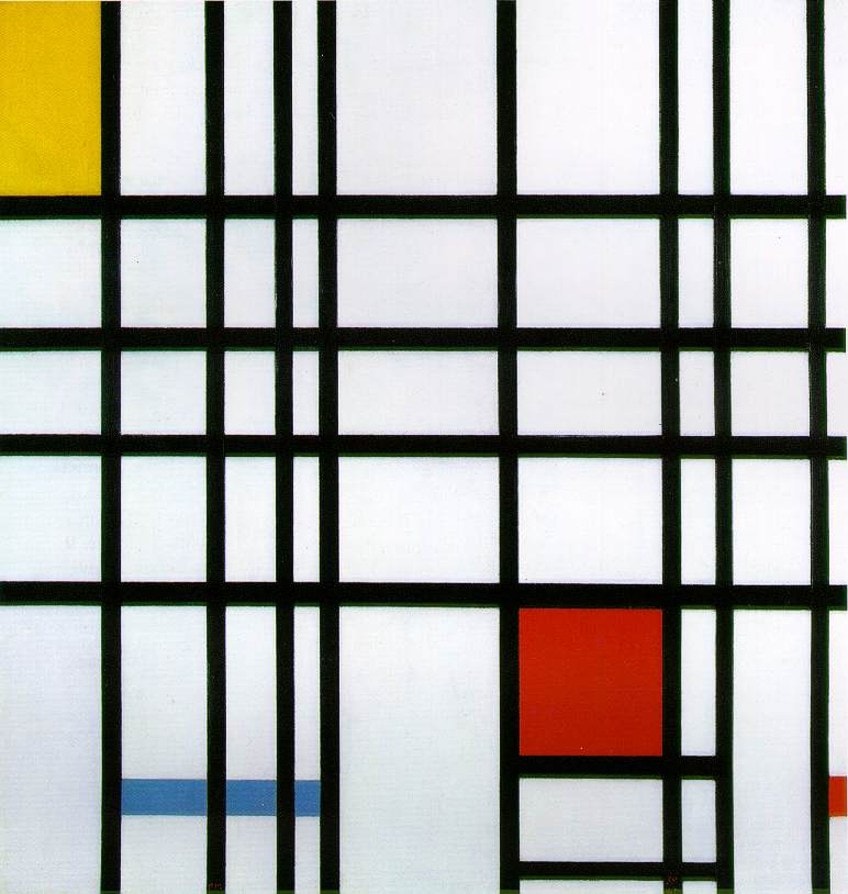 There are three colors on what is primarily a black and white composition, namely the top left corner that is yellow, near the bottom left is a blue strip, and near the bottom right is a red square with another smaller red square to the far right, bottom corner.

Although Mondrian utilized the same elements in terms of thick black lines and colors, the arrangement created is uneven or asymmetrical and the resulting shapes become randomized across the canvas.

This is evident in numerous other paintings from Piet Mondrian, including his later oil-on-canvas, Broadway Boogie Woogie (1942-1943), which depicts more colors, but again the irregular repetition of squares created by the lines and colors. 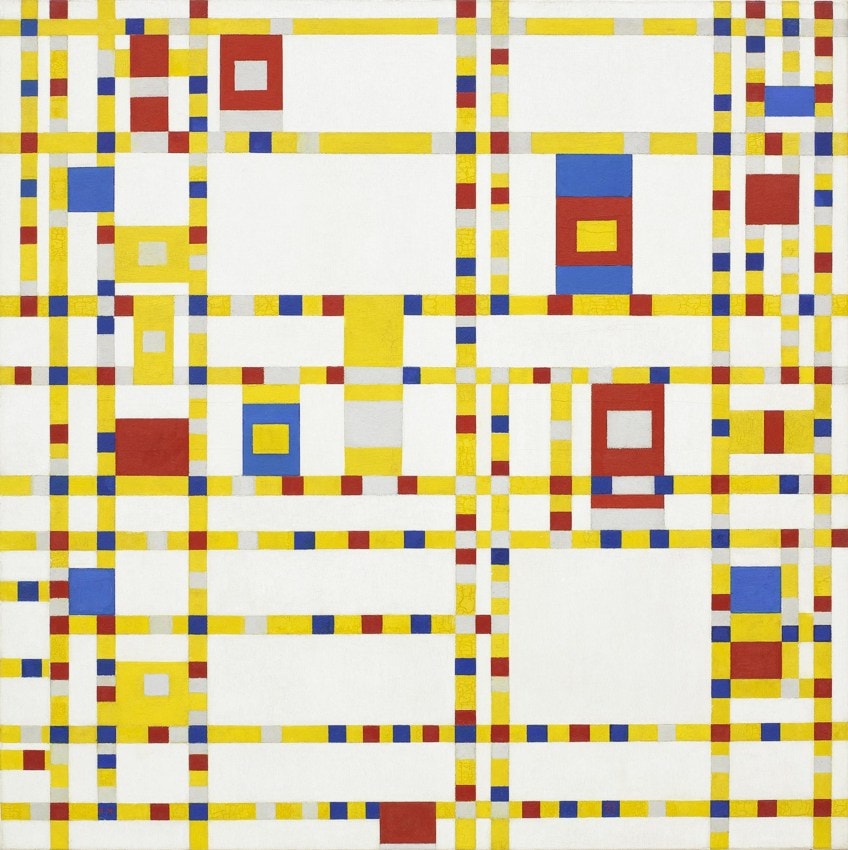 The etching Flumequine (2007) by Damien Hirst is another repetition artwork that bridges the gap between regular and irregular repetition. However, although there is a regular repetition of dots, including 12 rows with nine dots in each, the colors are irregular, creating a randomized effect despite the even spacing.

Alternating repetition includes different or contrasting elements arranged in corresponding patterns, for example, a square can be arranged in rows of alternating colors like blue and pink. The possibilities are endless when it comes to the types of arrangements or patterns that can be created.

There will also be a rhythm, movement, and unity created throughout the composition.

Alternating repetition art examples include the famous Op artist M. C. Escher and his various “tessellations”, for example, his Study of Regular Division of the Plane With Reptiles (1939), which depicts reptiles in a seemingly interlocking arrangement, but their colors alternate between green, white, and red.

Another repetition artwork with alternating repetition is Flying Fish (1954), also by M. C. Escher, and although the fish is repeated as the primary subject matter, Escher depicts fish in alternating colors of white and red and flying in different directions. Similarly, in the Marilyn Diptych (1962) by Andy Warhol, we see 50 repeated portraits of the famous Marilyn Monroe.

Progressive repetition refers to motifs or elements like color or shapes arranged in sequential order, ranging from small to large, thick to thin, or vice versa. Each repetition of a certain element will vary in size or shape.

This repetition then adds to the whole, which will also provide rhythm and unity.

A progressive repetition art example includes the famous Nude Descending a Staircase, No.2 (1912) by Marcel Duchamp. Here, the Cubist/Dadaist depicts a figure “superimposed” walking down what appears to be a staircase. The figure is progressively repeated to give the impression of movement; however, the figure’s body is in a different position with each descending step.

In the Futurist Giacomo Balla’s Dynamism of a Dog on a Leash (1912) oil-on-canvas are two figures, a dog (a dachshund) and a woman’s feet, however, both figures’ feet, the leash, and the dog’s tail are depicted in a repeated sequence, also seemingly blurred.

This type of repetition, where parts are repeated in a progress, is ideally utilized when conveying movement or speed, which was one of the primary characteristics of Futurist art. 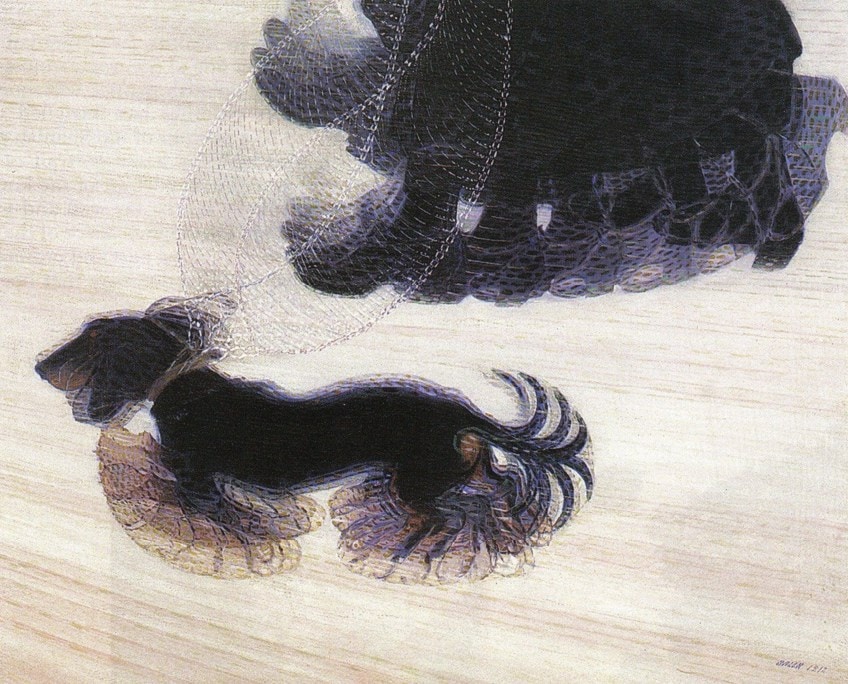 Radiating or emanating repetition consists of elements that emanate outwards from the center, where there is usually a point of connection. For example, think about Rose windows in cathedrals or the spirals on a seashell.

Radiating or emanating repetition art examples can be utilized not only with paint on a two-dimensional canvas, but also as decorative elements in interior spaces with mosaics.

This can be seen in the Mosaic Floor with Head of Medusa (115-150 AD), which is housed at the Getty Museum in Los Angeles, California. The Mosaic depicts the centralized figure, or head of Medusa, surrounded by a repetition of emanating, almost triangular shapes (or motifs), which are similarly alternating in color.

Another radiating repetition artwork is the luminous stained-glass North Rose Window (c. 1250), located at the Notre Dame Cathedral in Paris, France. The central figures are the Virgin Mary and Jesus Christ. Surrounding them are the figures of prophets and various kings. 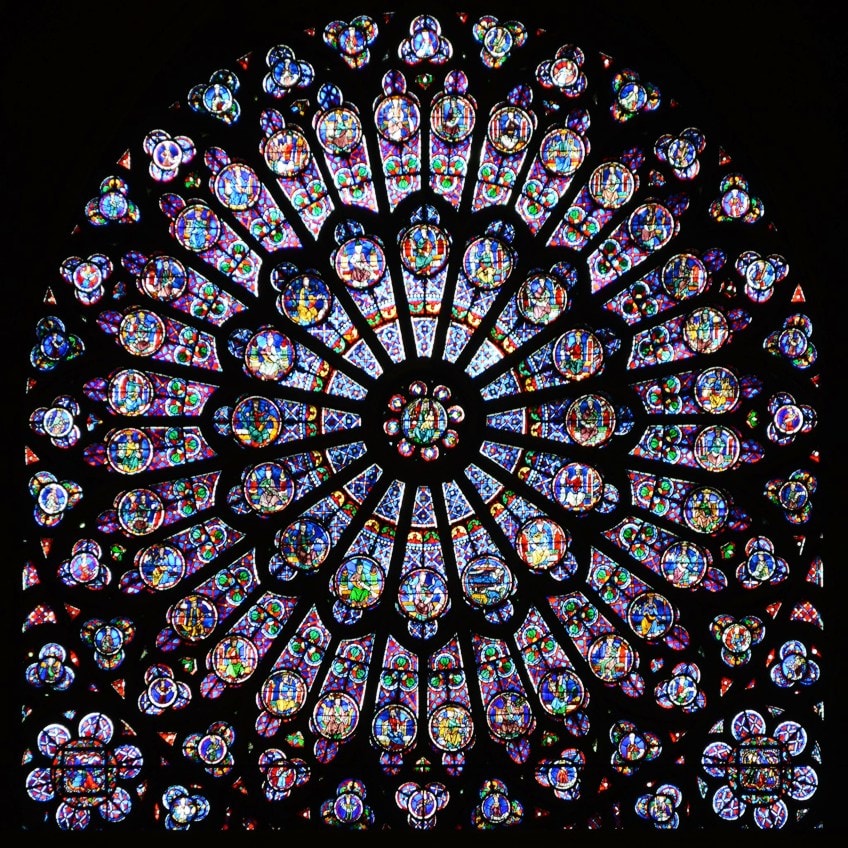 In this article, we explored the question, “What is repetition in art?”. We looked at how it is one of the art principles that can create rhythm and movement in artworks, as well as touched on other ideas of consumerism or Abstract art. Although we mentioned only several repetition art examples, there are thousands of iterations of repetition in art.

What Is Repetition in Art?

Repetition is one of the art principles and occurs when an element, motif, or symbol, is repeated in a visual composition, which can be any art element like colors, lines, shapes, or forms, which can also be arranged in patterns.

What Is the Difference Between Repetition and Pattern?

Repetition is about a single element repeated or replicated, but it is different from a pattern, which can consist of several elements and can be a motif or symbol, which can also be arranged in repeated sequences. Therefore, repetition can be applied to how patterns are arranged.

What Are the Art Elements?

The seven common art elements consist of color, texture, value, form, shape, line, and space. These are defined as the so-called building blocks that create visual compositions and are organized by the principles of art, which are harmony, balance, scale, proportion, unity, variety, rhythm, movement, contrast, pattern, and repetition.