“The Temptation of St Anthony” by Salvador Dalí – An Analysis

Saint Anthony has been presented in the visual arts for centuries, especially his temptation in the desert. This article will explore and discuss this subject in the version painted by the famous Surrealist Salvador Dalí titled The Temptation of St. Anthony (1946).

Artist Abstract: Who Was Salvador Dalí?

Salvador Dalí was born in the town of Figueres in Catalonia, Spain. His date of birth is May 11, 1904, and his date of death is January 23, 1989. He worked in various art styles like Impressionism, Cubism, and Pointillism, but became popular within the Surrealist art movement. His education included studies at the San Fernando Royal Academy of Fine Arts, but did complete his studies there.

Dalí was influenced by the ideas of psychoanalysis and Sigmund Freud’s theories.

He became a “celebrity” artist throughout his career, known for his divergent approaches and style and collaboration with numerous significant artists. Some of his famous artworks include The Great Masturbator (1929), The Persistence of Memory (1931), The Burning Giraffe (1937), and, of course, The Temptation of St Anthony (1946). 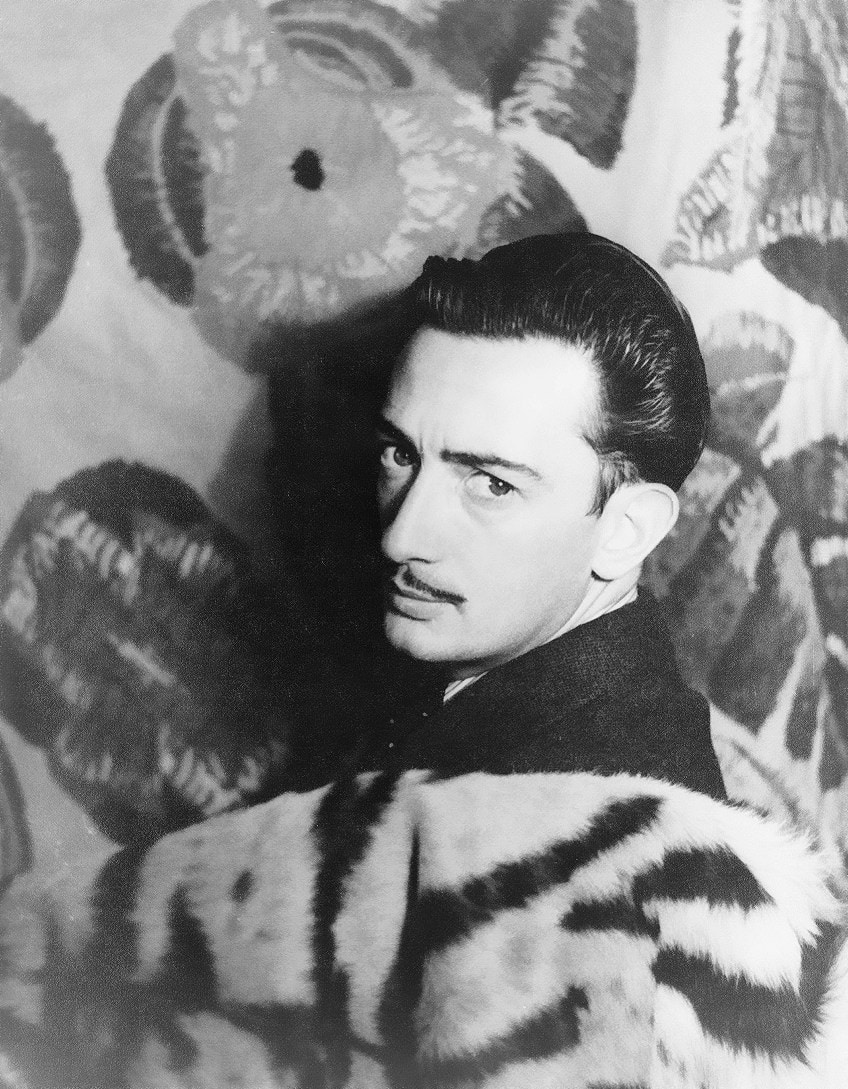 The Temptation of St Anthony (1946) by Salvador Dalí in Context

In the article below we will look at Salvador Dalí’s The Temptation of St Anthony analysis, starting with the history of why he painted it and a look at how he painted it in terms of the elements of art.

The Temptation of St Anthony by Salvador Dalí was painted in 1946, which was when he lived in New York, where he and his wife Gala moved to in 1940 because of World War II. However, he traveled to New York on previous occasions and stayed there for just under a decade.

Dalí was also interested in other artistic modalities like the film industry and joined a competition held by the David L. Loew-Albert Lewin company, which was a film production company.

Named the Bel Ami International Art Competition, 12 artists were called to create a painting that was based on the Temptation of St Anthony as part of the drama The Private Affairs of Bel Ami (1947), which was directed by Albert Lewin and Produced by David L. Loew and based on the novel by Guy de Maupassant Bel-Ami (1885).

However, Dalí’s version received acclaim for how he chose to portray the subject matter.

The Story of the Temptation of Saint Anthony

The Temptation of St Anthony by Salvador Dalí can be better understood with a knowledge of the story around the temptation of Saint Anthony, who was also known as Anthony the Great, who was born in the year 251 and died in 356. He was born in Egypt and became a Christian monk famous for traveling into the Egyptian desert.

During his solitary time in the desert, he underwent numerous temptations by demons who came to him in different guises.

This has become a popular theme for artists to portray over the years. 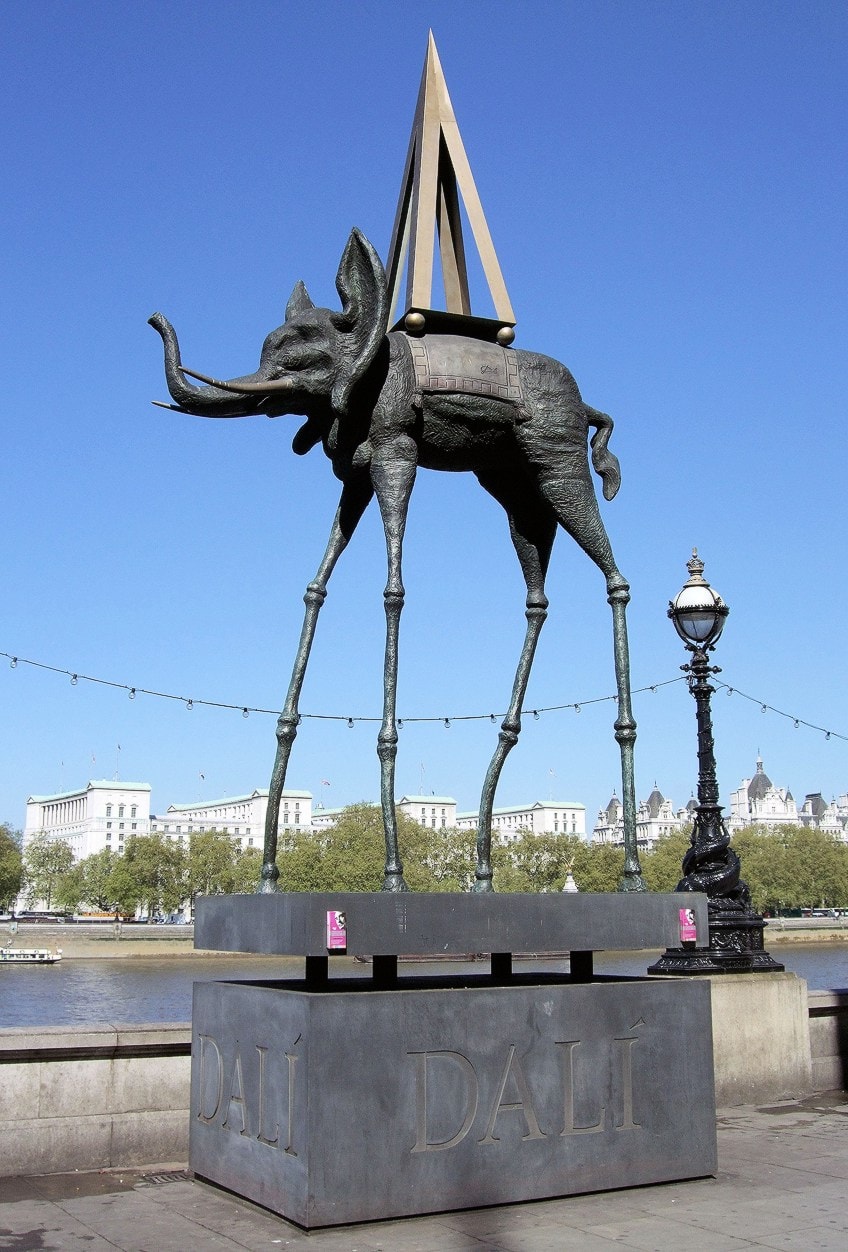 Space Elephant (1980), based on the 1946 painting by Dalí, The Temptation of St Anthony. This statue depicts one of Dalí’s elephants with long spider legs (signifying desire) and carrying an obelisk on its back, which is a symbol of power, desire, and domination. Dalí suggests that St Anthony was visited by such desires; Jim Linwood from London, CC BY 2.0, via Wikimedia Commons

Below, we will discuss The Temptation of St Anthony by Salvador Dalí in more detail, looking at the subject matter – what did the artist portray exactly? – and the stylistic composition, which will be categorized around the visual art elements (color, texture, line, shape, form, and space).

In The Temptation of St Anthony painting, Salvador Dalí depicts a desertscape; about one-third of the composition is the desert land, which is barren and sandy except for several objects that we will discuss further below. Around two-thirds of the composition is made up of the blue sky with clouds. This composition is described as having a “low horizon” line.

There appears to be a mountainous region far into the distance just off-center to the left. The nude and half-kneeling figure of St Anthony is positioned in the bottom left corner of the foreground; he is kneeling on his left leg while his right leg is bent at the knee holding him steady.

He is holding up a cross – which appears to be made of two sticks held together with a piece of string or rope – in his right hand, and his arm is straight and extended, displaying his assertiveness at what is in front of him.

His left hand is slightly behind him on what appears to be a gray rock formation, supporting him as he kneels and slightly leans back. Saint Anthony’s hair appears disheveled, and he has a beard. There also appears to be a halo above his head, which indicates his identity as a saintly figure. In front of him, to the left of his right foot, is a skull, which appears to be a human skull.

In front of Saint Anthony are various figures and animals, and in the middleground, there are four human-like figures, one of whom appears to be a child walking with an adult. The other two appear to be in an altercation of sorts.

These figures are standing under a procession of four giant elephants with unnaturally long and almost rickety legs.

In front of the elephants is a giant white horse, also with elongated legs. The horse is in a rearing position and appears aggressive. It is also right in front of the figure of Saint Anthony, who is holding the cross up as if to ward off the evil rearing itself toward him.

There are various figures and structures on top of the elephants; on the elephant behind the horse is a nude female figure standing on a golden plinth object, and behind that elephant is an obelisk with spherical forms in it. The last two elephants have a building-like structure on top with a female’s nude upper torso inside and are shown through the open window. On top of this structure are two statuesque figures with their arms open and extended, and their postures appear fluid as if they are dancing, although this is questionable.

In the far distance to the right is another elephant walking on its own towards the left-hand side of the composition. On its back is a long structure towering behind the clouds in front of it. This structure has been described as possibly having “phallic” symbolism.

There are formations of clouds to the right and they appear dark as if a storm is brewing. Nestled in the whiter clouds is another building structure, which has been described as the “El Escorial”, which is a monastery in Spain.

The various nude figures on the elephants are believed to symbolize Saint Anthony’s temptation, notably sexual temptation. Some have also described the large structures as possibly being material temptations, and the horse as possibly symbolizing ideas of power.

The color scheme in The Temptation of St Anthony by Salvador Dalí is harmonious because it is in soft hues of whites, browns, golds or yellows, blues, and grays. There are no stark colors that create contrast, but there is shading that highlights certain areas and creates depth. For example, the shadows on the ground from the various figures indicate a light source, which possibly comes from the sun in the sky of the composition, located slightly off-center to the right.

Another example includes the shading on the left of the large horse and the highlights on its right side, indicating the subtle shifts of light reflected on it.

The Temptation of St Anthony depicts implied texture on the two-dimensional canvas, as seen in the muscular, but lean figure of Saint Anthony, the musculature of the rearing horse, the smooth skin tones of the women symbolizing temptation, the soft and downy texture of the clouds, and the rougher, craggy, texture of the rock formation in the bottom left corner.

The tactile texture of the paint and Dalí’s brushstrokes appear smooth.

Vertical linearity is implied by the elongated legs from the horse and elephants, which in turn appears to be created by various diagonal lines. The vertical structures on the elephants’ backs also create an upward movement. This is subtly contrasted with the visible horizontal linearity implied by the horizon.

The appearance of the land and the expanse of sky can almost be looked at as horizontal bands.

There are all sorts of different lines along with the dominant vertical and horizontal lines and layout. From straight lines on the towering structures to various curvy lines that create depth and implies texture, notably the array of lines implied through the musculature on the horse’s and Saint Anthony’s bodies.

Salvador Dalí incorporated numerous types of shapes and forms in The Temptation of St Anthony painting, from the more organic/naturalistic forms of the figures and animals such as Saint Anthony’s musculature, the voluptuous figure of the nude woman, and the horse and elephants, although they are more fantastical in nature, part of their form still appears close to nature.

Geometric shapes and forms can be found in the obelisk structure on one of the elephants – it appears more pyramidal with spherical shapes on it, including the tower on the far elephant’s back, which appears cylindrical.

Three-dimensionality is created through scale, in other words, the subject matter appears in various sizes, which provides perspective. For example, the smaller figure of Saint Anthony compared to the giant figures of the horse and elephants, where the latter are further emphasized by the even smaller figures places in between them.

Perspective is also created by the diminishing size of the mountainous region far in the distance, giving the impression of a vast landscape. The large expanse of sky also creates emphasis on the large figures dominating the composition.

In this article we explored Salvador Dalí’s painting The Temptation of St Anthony analysis, which he created as part of a competition for a film around the theme of Saint Anthony’s temptations in the desert, but his subject matter goes well beyond what it was originally painted for. In other words, it is a testament of his inner creative genius and the boundaries he pushed that, at times, caused the world to recoil.

From tall-legged elephants, structures in the clouds, and a glimpse at the grotesque, what Salvador Dalí makes us, the viewers, see is another reality, created from his own thirst and passion for the otherworldly – the surreal.

Did Salvador Dalí Paint The Temptation of St Anthony?

Salvador Dalí painted The Temptation of St Anthony (1946), but there have been numerous other versions of the subject of the temptation of Saint Anthony painted throughout art history.

Where Is The Temptation of St Anthony by Salvador Dalí?

The Temptation of St Anthony (1946) is housed at the Royal Museums of Fine Arts of Belgium, but was reportedly acquired through a purchase from Mrs. Anne-Marie Robiliart in 1965; the exact price is uncertain.

Who Did Salvador Dalí Paint The Temptation of St Anthony For?

The Temptation of St Anthony (1946) by Salvador Dalí was painted for the Bel Ami International Art Competition for the film The Private Affairs of Bel Ami (1947). However, Max Ernst’s painting won the prize.