“The Red Vineyard” by Vincent van Gogh – An Analysis 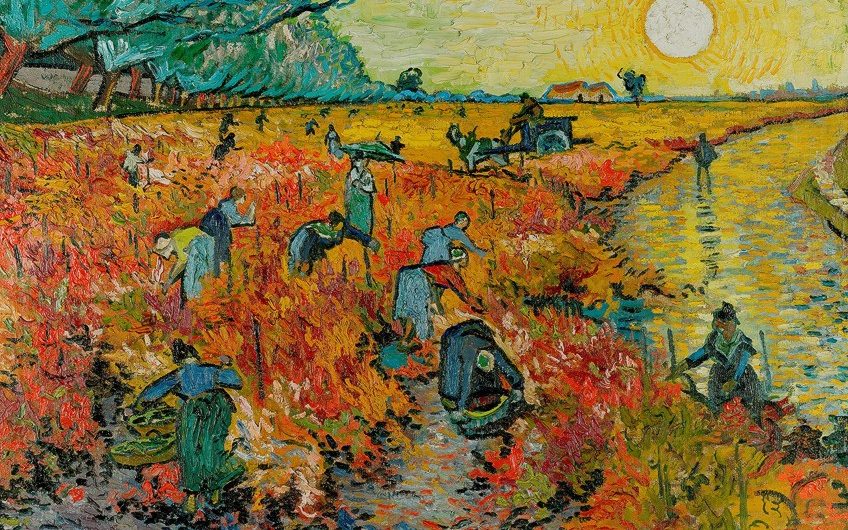 The Red Vineyard (1888) is an oil painting by the post-Impressionist Vincent van Gogh. It has quite the reputation, reportedly being the only painting that he sold while he was alive. We will discuss the painting in more detail.

Vincent van Gogh started as an artist in his late twenties and became one of the most well-known post-Impressionists in art history. He was born March 30, 1853, in Zundert, Netherlands. He had three sisters and two brothers and often wrote to his younger brother Theo van Gogh, who was also an art dealer. The Dutch artist had numerous occupations throughout his life, from art dealership and teaching to preaching, but he eventually found art and loved depicting people and places around him.

However, he was not a financially successful artist and apparently only sold one painting when he was alive, but his fame found him after his death in July 1890. 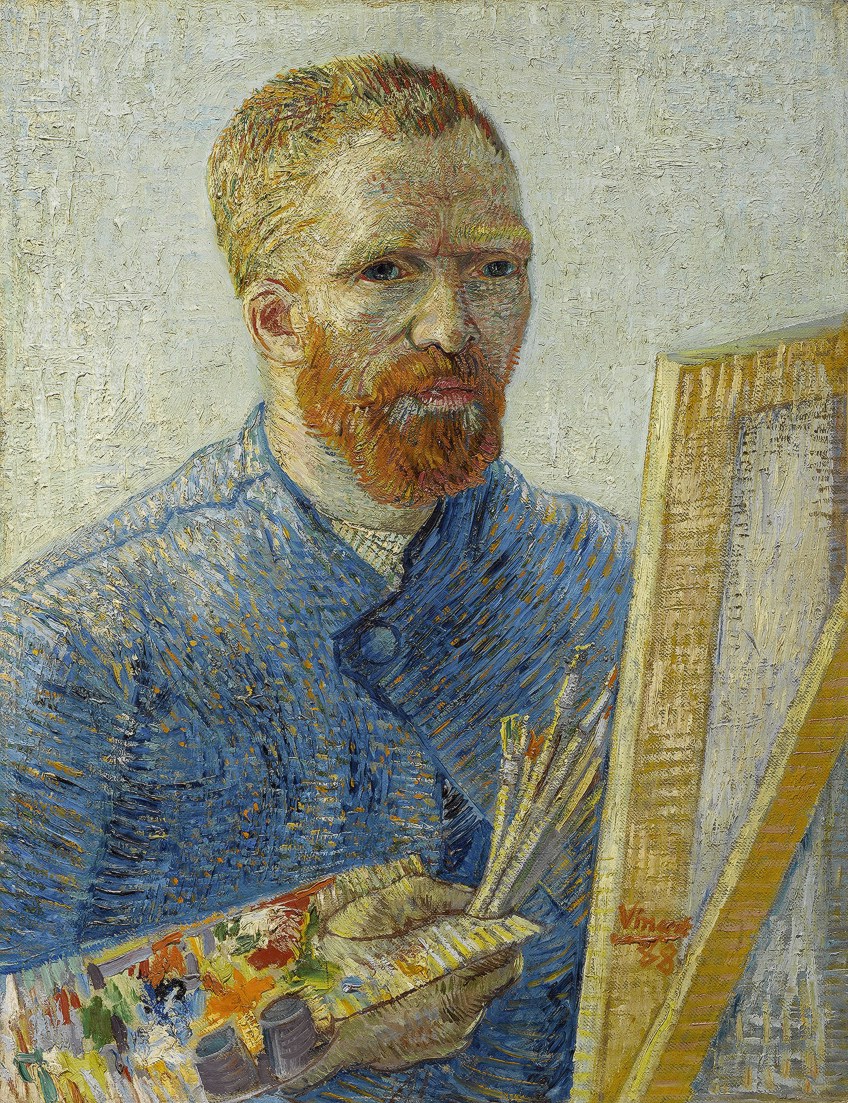 The Red Vineyard (1888) by Vincent van Gogh in Context

Below we will provide a brief contextual analysis answering the often-asked question, “What painting did Van Gogh sell?”, which will lead us to explore more about when The Red Vineyard was painted and exhibited. This will be followed by a formal analysis, discussing Van Gogh’s artistic style in terms of the art elements like color, value, texture, line, shape, form, and space.

The Red Vineyard by Vincent van Gogh is also titled as the Red Vineyard at Arles. It was painted in the same year when he moved to Arles, a city in southern France, in February 1888. The year 1888 was an eventful time in the artist’s life.

He moved from Paris, reportedly because the city life was too much for him and he wanted warmer weather. Furthermore, he sought to create what has been referred to as an artists’ “colony” and he rented the famous Yellow House on Place Lamartine, which would be dedicated to creating art with other artists.

An example of this same house is seen in Van Gogh’s oil painting of it titled “The Yellow House” (1888), which is now housed in the Van Gogh Museum in Amsterdam. 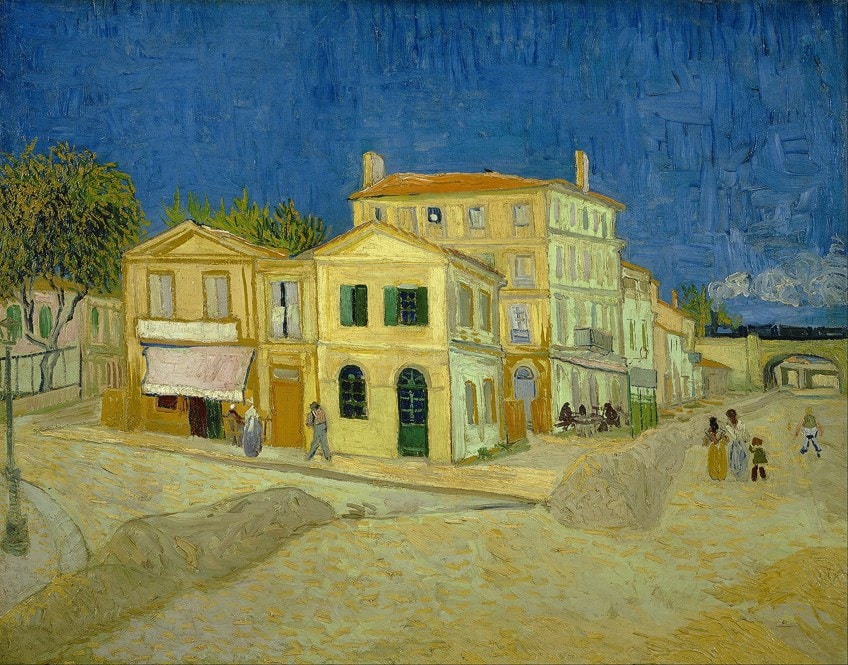 In a letter to his brother Theo van Gogh, dated Tuesday 4 September 1888, Vincent van Gogh wrote about artists escaping the “harshness of the north” and having a “studio in the south” where someone could stay. In October, Paul Gauguin joined him in Arles and the two artists lived in the yellow house and seemingly tirelessly created numerous artworks.

However, in December, Van Gogh’s mental health wavered, and he and Gauguin had a falling out, which is also when Van Gogh cut off a piece of his own ear – an incident that immortalized him forevermore. 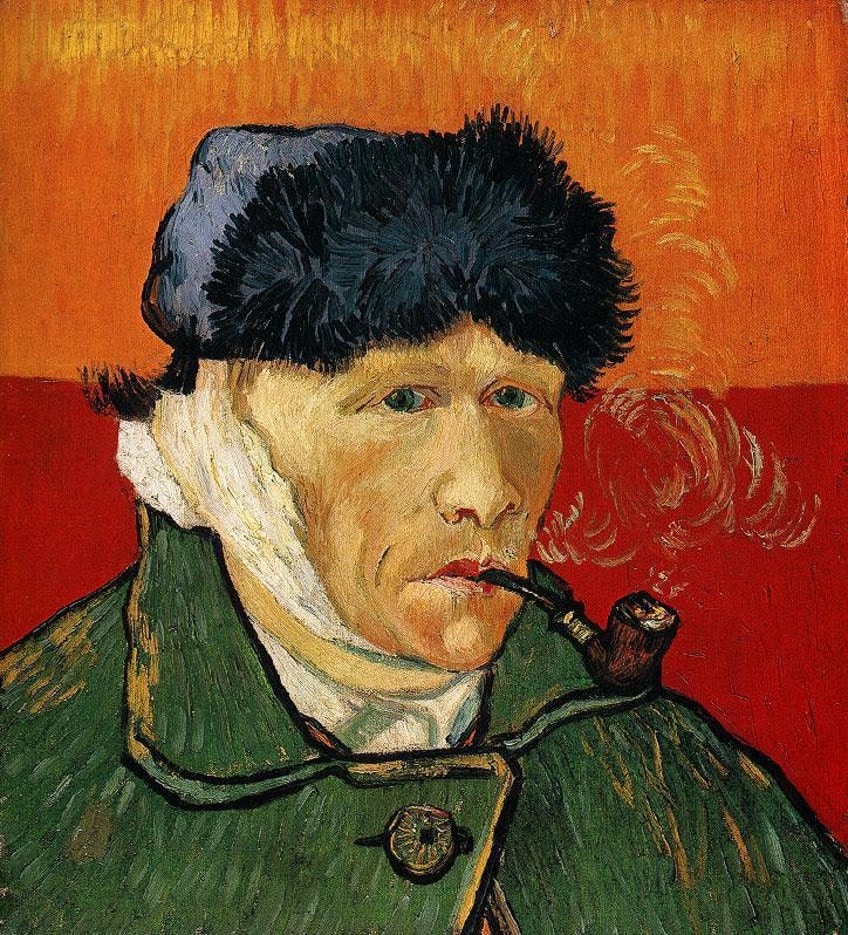 Although we have a broader context of Van Gogh’s stay in Arles, it is worth exploring his own explorations of the city and countryside. He created over a hundred paintings and lavished in the countryside’s beauty, painting various renderings of farms, wheat fields, haystacks, blossoms, street scenes, and more.

All of Arles enthralled the artist, and this period has been described by many as his most creatively “prolific”. 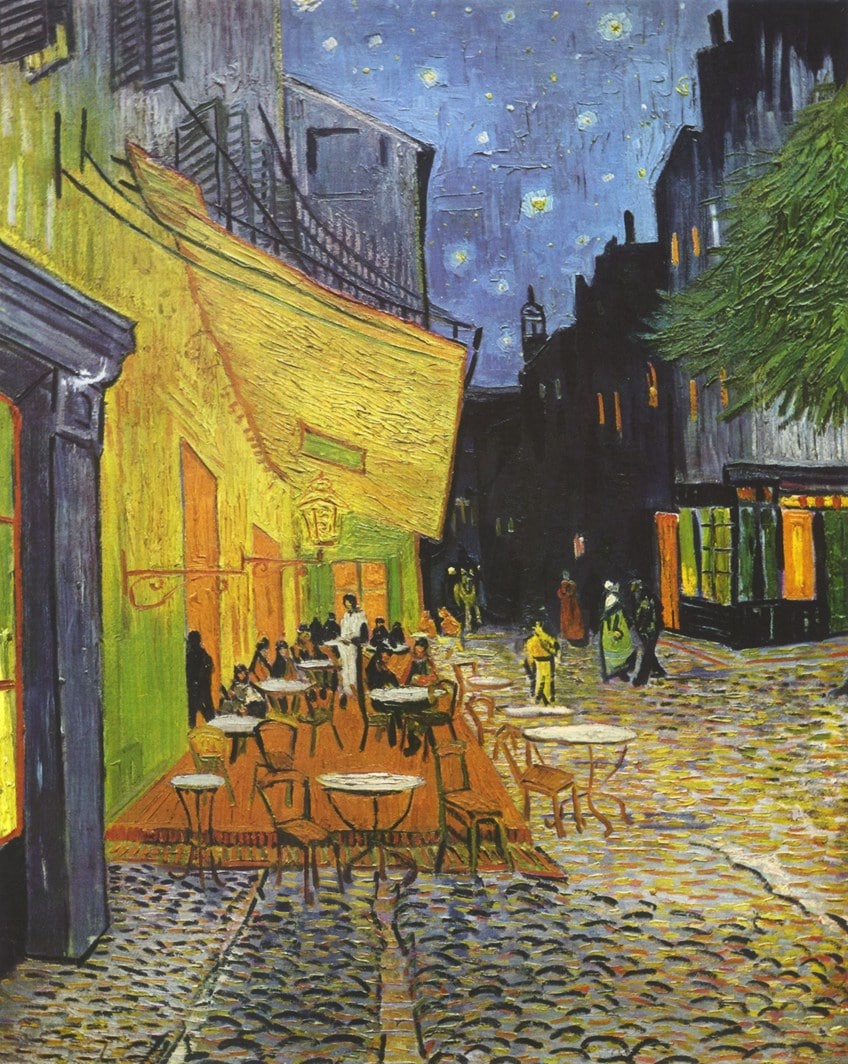 Les XX, or Les Vingt, translates to “The Twenty”, and it was the name of a group of avant-garde artists who annually exhibited their artworks from around 1883 to 1893. It was founded in Brussels as a reaction against the rules of the Brussels Academy of Fine Arts. There were reportedly 11 founding members, of which Octave Maus, who was a lawyer and art critic, was the secretary. The exhibitions included Belgian and international artists from different modalities.

Some of the artists who exhibited included Georges Seurat, James Ensor, Henri de Toulouse-Lautrec, and many others. 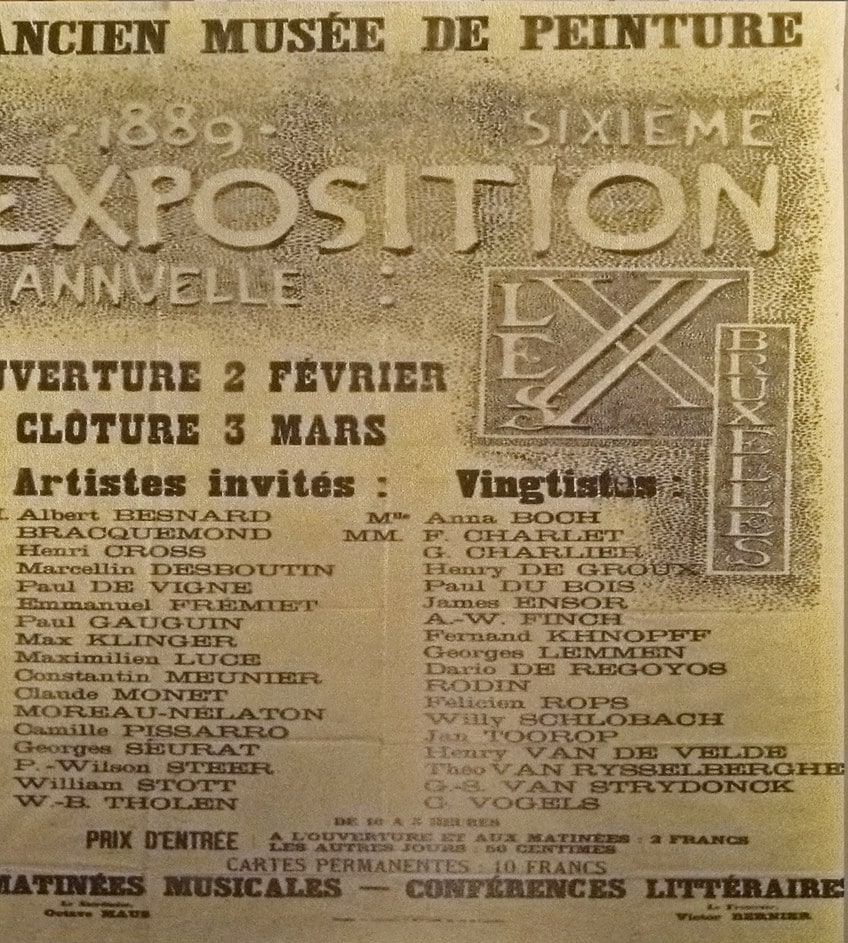 Poster of the artists exposition of the Belgian group “Les XX” in 1889, the year before Vincent van Gogh was invited to exhibit his works; JoJan, CC BY 3.0, via Wikimedia Commons

This purchase has often been described as the only artwork that Vincent van Gogh sold when he was still alive.

There are also various reasons as to why Boch bought it; some include that she wanted to support Van Gogh financially as well as to soften the blow from harsh criticisms, or that she merely just loved the painting.

Below we will look at The Red Vineyard analysis, discussing the subject matter as well as the visual composition in terms of the formal elements of art. This is reportedly one of several landscape paintings van Gogh painted from memory while he was renting the Yellow House in Arles. 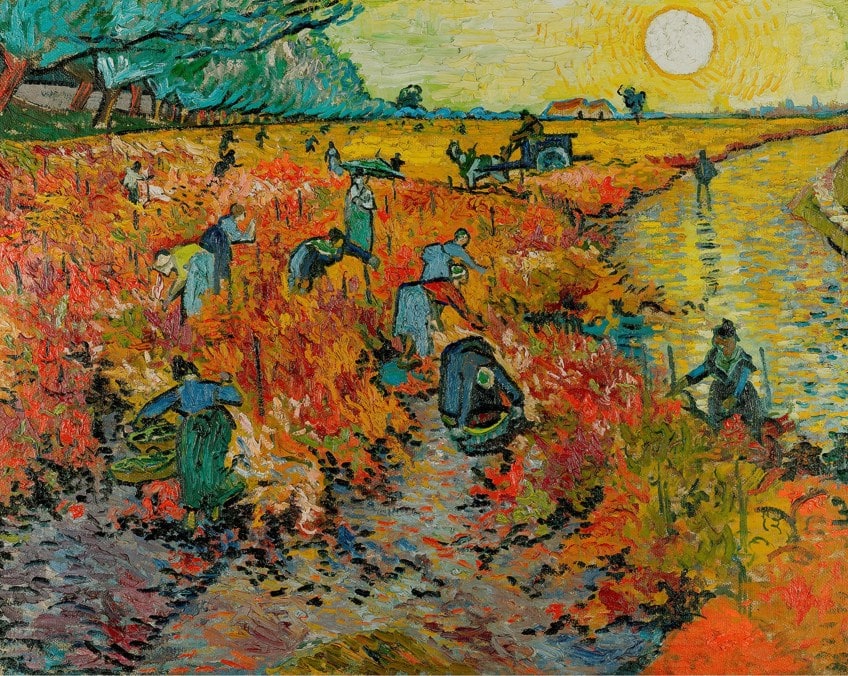 The Red Vineyard by Vincent van Gogh depicts an outdoor scene where a group of people, possibly over 20, are working in a vast open field – most of the people are hunched over with outstretched arms, busy picking and harvesting from the vines around them.

All the figures are in different positions, some have their backs to us, the viewers, some are facing the left or right sides, and others are faced toward us. They all appear engrossed in their activities.

In the foreground there are around nine visible figures, some appear to be women and some men based on their clothing. The figure in the center is hunched over and possibly picking up what appears to be a large basket filled with grapes. 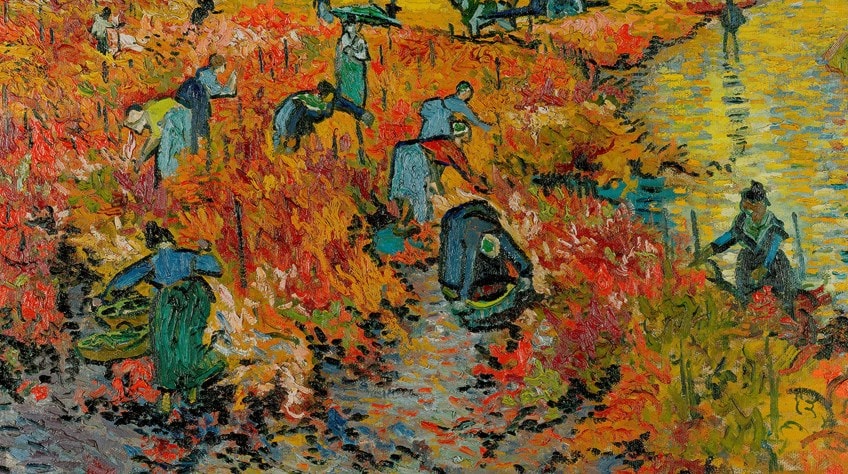 In the background, there are more figures, although they appear smaller in scale and less detailed. There is also a horse and carriage driven by a man sitting on top, who appears to be heading towards the left side of the composition.

In the far distance there is a building, which could possibly be a farmhouse, and on the right edge of the composition is a river winding out of our view with a solitary figure standing mid-way in the water. In the foreground is a woman at the edge of the riverbank; she is possibly standing in the water.

There is also a long row of larger trees receding into the distance to the left edge of the composition, creating a border-like effect.

Van Gogh depicted a warm and beautiful golden yellowed sky with a large pale-yellow orb of the sun – not quite centrally placed, but more to the right of the composition – that suggests an afternoon sun more than the morning sun.

Furthermore, if we look at the composition, Van Gogh filled most of the canvas with the receding landscape, and only an upper, almost a third, part of the composition is dedicated to the sky and the sun. 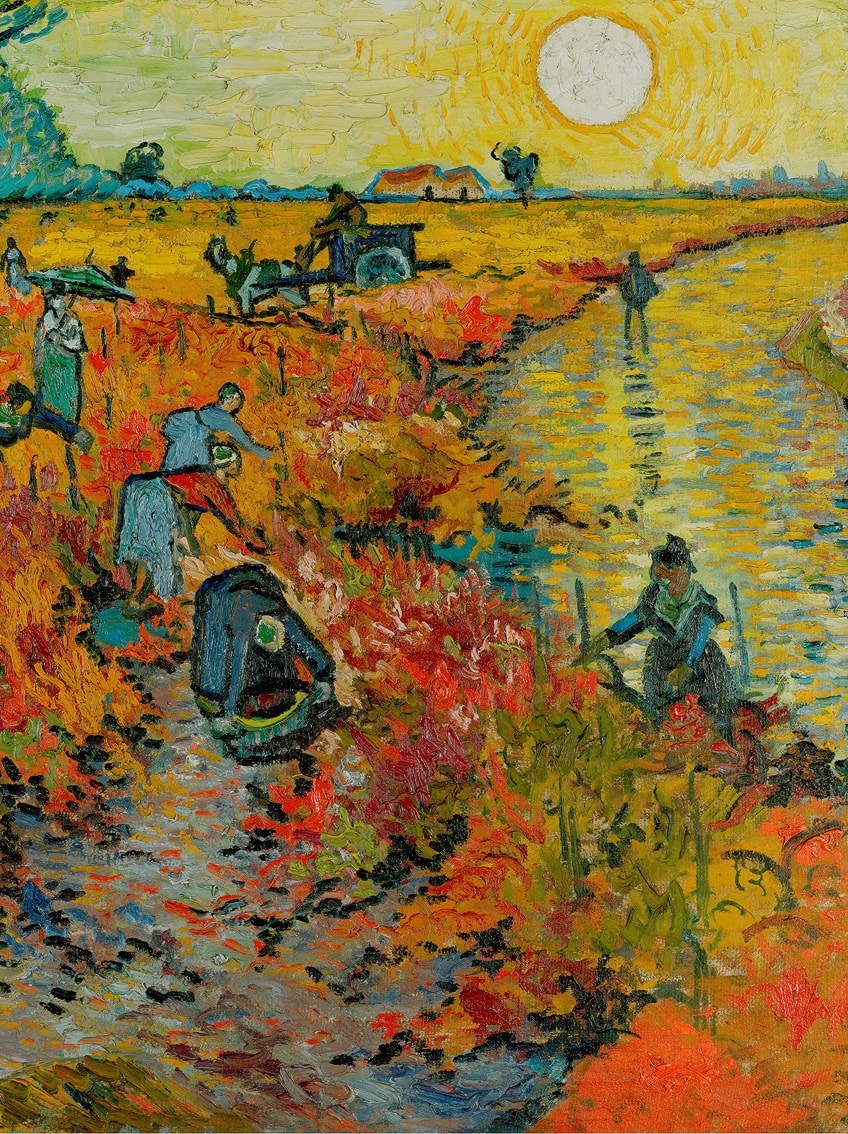 In The Red Vineyard painting Vincent van Gogh utilized an autumn palette of colors suited to that seasonal time of the year in which the painting was created – the composition is overall warm in feeling and color temperature. There is a golden glow over the landscape from the setting sun in the background and yellows and reds mainly stand out, but there are also greens and blues.

We can see how Van Gogh mixed his colors, for example, in the top left section of the painting, as the trees meet the sky, the green hues transition to more yellow hues. 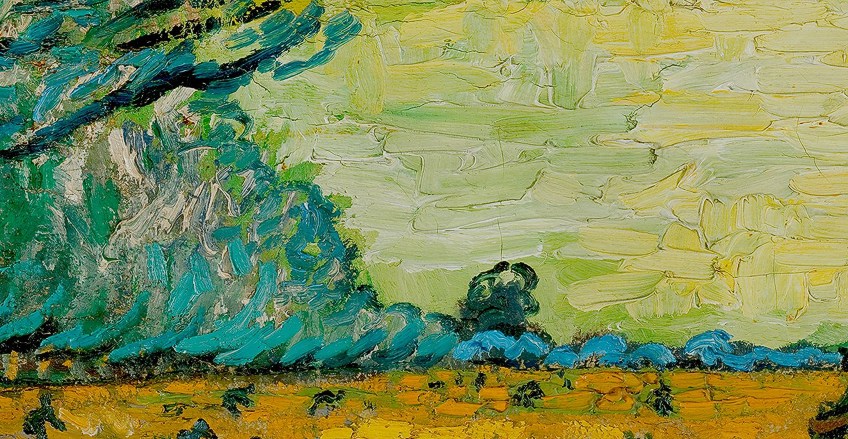 This also indicates how Van Gogh utilized an analogous color scheme, in other words, colors that are next to the other if you look on the color wheel. Furthermore, Van Gogh became famous for the way he placed colors in his paintings, sometimes also utilizing complementary color schemes to create different effects and moods.

There are also tints like white mixed into some areas of color; for example, the tree to the left as well as darker shades like black outlining and silhouetting the people in the background, including the horse and carriage.

Thus, we can see that Van Gogh utilized thick outlines in this composition.

Texture in The Red Vineyard painting is clearly visible from the varying brushstrokes on the canvas; the paint is also applied thickly onto some parts of the canvas. However, we can also notice an implied texture denoting the water to the right of the composition, it appears shimmeringly smooth and reflects the sunlight above.

There is an overall harmony of texture in this composition, because of the similar textured surface throughout, which consists mainly of shorter – and somewhat longer – choppier brushstrokes. 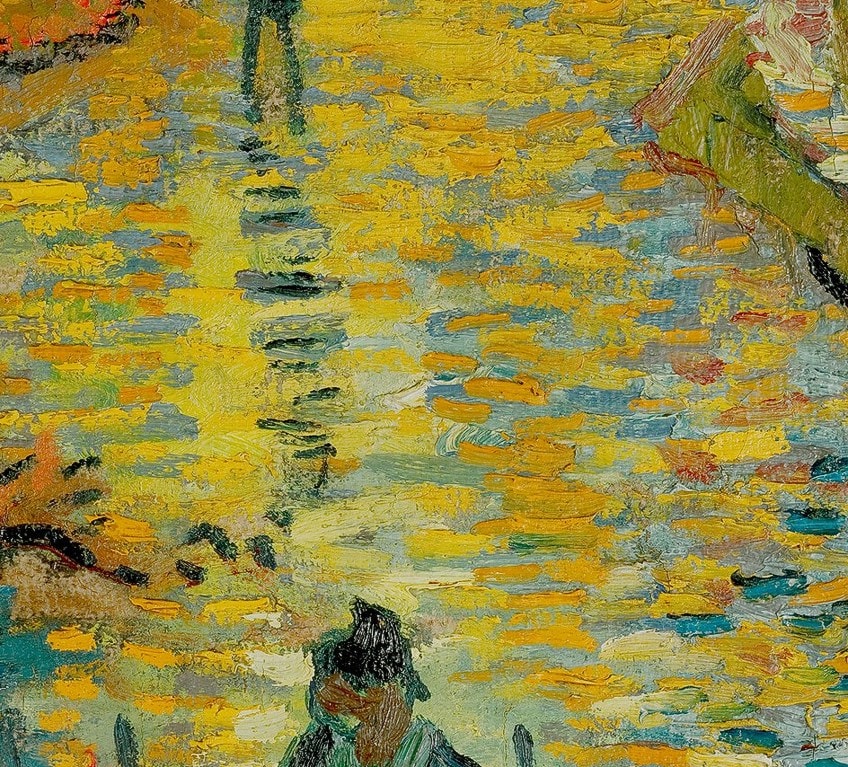 The curved horizon line emphasizes the landscape and how it stretches into the distance, creating a horizontal line in the distance. There are also vertical lines created by the people and the vine poles in the field.

We can also see different types of lines created by Vincent van Gogh’s physical application of brushstrokes, some examples include the horizontal brushstrokes for the sky, the thick and choppy brushstrokes in the open foreground, as well as the curved brushstrokes that imply the rays of the sun around the orb of the sun.

The way Van Gogh applied his brushstrokes, creating various lines throughout, gives the composition a rhythm and feeling of movement. The sun’s rays are seemingly radiating outwards and the people in the field are dynamic in their postures.

There are a variety of shapes and forms in The Red Vineyard painting, ranging from more organic shapes in the landscape like the trees, the water, and the foliage, as well as geometric shapes in the carriage, some more angular lines to denote the bending figures in the fields, and the large circular shape of the sun shining over the landscape. 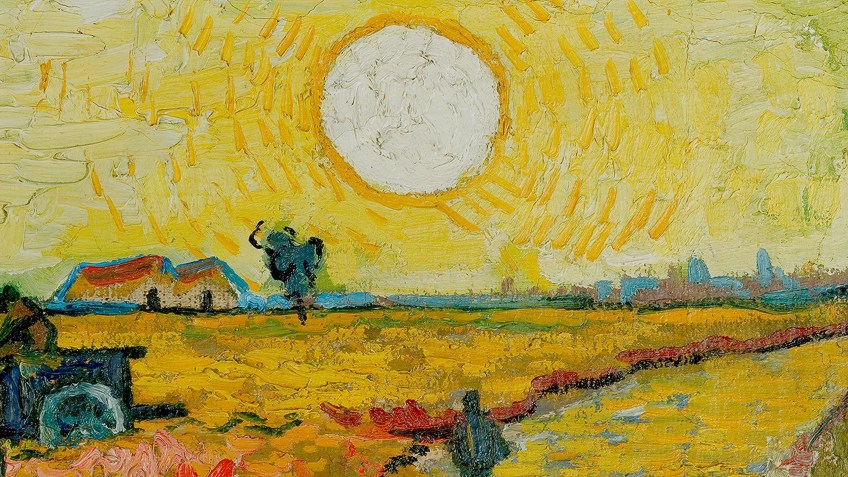 Furthermore, as previously mentioned, there is a focal point, otherwise referred to as a vanishing point, in the distance near the top right that is not in our view, which also creates a sense of continuity of the space, further emphasizing depth.

The Vibrancy of Vincent van Gogh

While there is so much more that we can discuss in The Red Vineyard by Vincent van Gogh and the stylistic details adorning this depiction of a sun-filled afternoon, undoubtedly this painting is just one of many examples illustrating the Dutch artist’s abilities to combine colors and textures that create a whole other world of meaning.

“The Red Vineyard” analysis above depicts subject matter that was close to Van Gogh’s heart, and his adoration of the outdoors. When we look at this composition, we are there with him, taking a walk through the vineyards, only we become part of the vibrancy of Van Gogh’s world fashioned from his own perception of the real world.

Who Painted The Red Vineyard?

The Red Vineyard was painted in 1888 by the post-Impressionist and Dutch artists Vincent van Gogh. This was at a time when he lived in the French city called Arles and rented the Yellow House, which he briefly shared with fellow artist Paul Gauguin.

What Painting Did Van Gogh Sell?

Vincent van Gogh sold his landscape painting titled The Red Vineyard (1888), otherwise also titled Red Vineyard at Arles. The artist Anna Boch bought the painting for 400 Francs when it was exhibited in 1890 at the Les XX exhibition.

Where Is The Red Vineyard by Vincent van Gogh?

The Red Vineyard (1888) by Vincent van Gogh is now housed at the Pushkin State Museum of Fine Arts in Moscow, Russia. It has been here since 1948 after being sold on several occasions, although its initial owner was Anna Boch.