Starry Night Over the Rhône (1888) is one of Vincent van Gogh’s depictions of the nighttime and its colorful entrancement of light. This is what we will discuss in this article, exploring questions about when it was painted and Van Gogh’s artistic approaches.

Vincent van Gogh was born in the town of Groot-Zundert in the North Brabant province, which is in the Netherlands. He explored art from an early age but only started a career as an artist when he was much older. He did work that ranged, from art dealership, teaching, and assistant work for a minister. He did not live a lavish life and was often poverty-stricken receiving financial assistance from his brother Theo van Gogh.

He created well over 1000 artworks, of which almost 900 were paintings. 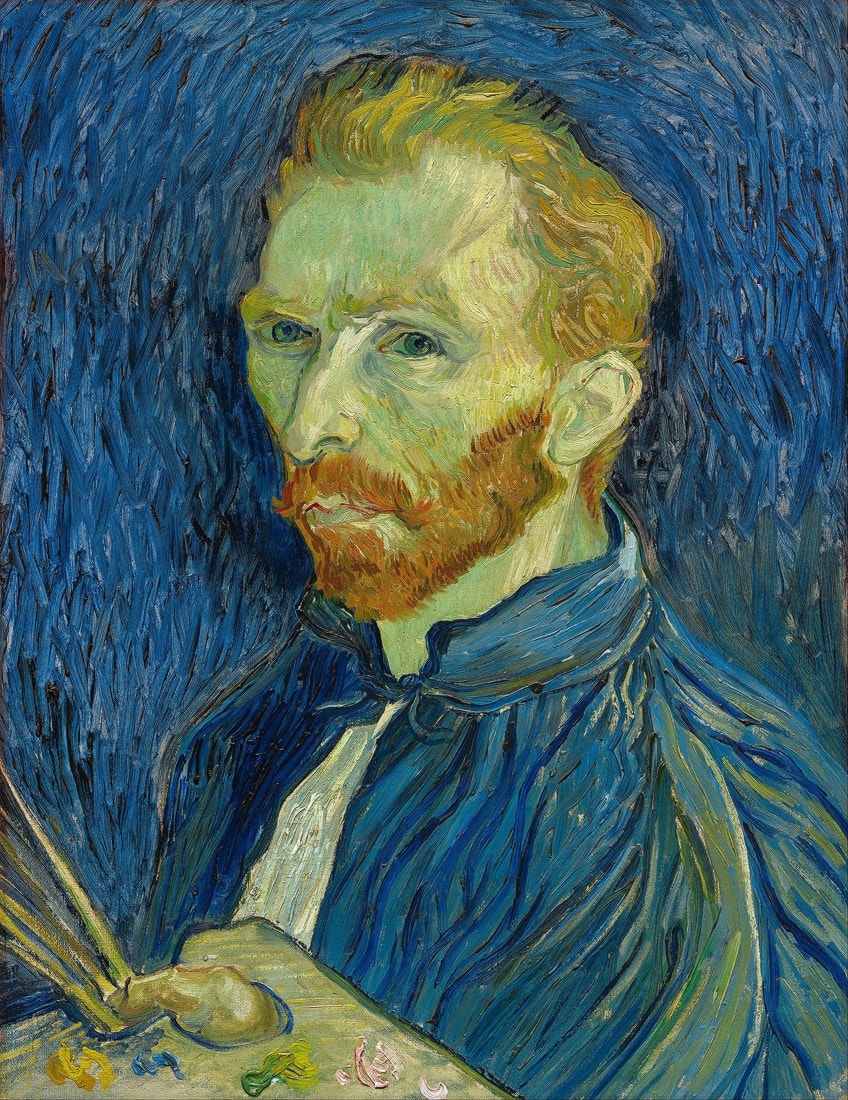 Starry Night Over the Rhône (1888) in Context

We will then discuss a formal analysis, looking at his stylistic approaches in terms of several art elements and principles.

Vincent van Gogh painted Starry Night Over the Rhône when he lived in Arles, a city in southern France. He moved to Arles in February 1888 from Paris, where he lived for around two years with his brother Theo van Gogh.

In May of 1888, Van Gogh reportedly utilized the famous Yellow House, located on Place Lamartine, as a studio, which he would later move into and rent, during September 1888. The house had several rooms and he wished to use it as a communal space for other artists to stay and work. His friend and fellow artist Paul Gauguin visited in October 1888 and only stayed for around two months, abruptly leaving due to a fallout between the two artists.

This was the time of the well-known incident when Van Gogh cut off part of his ear. 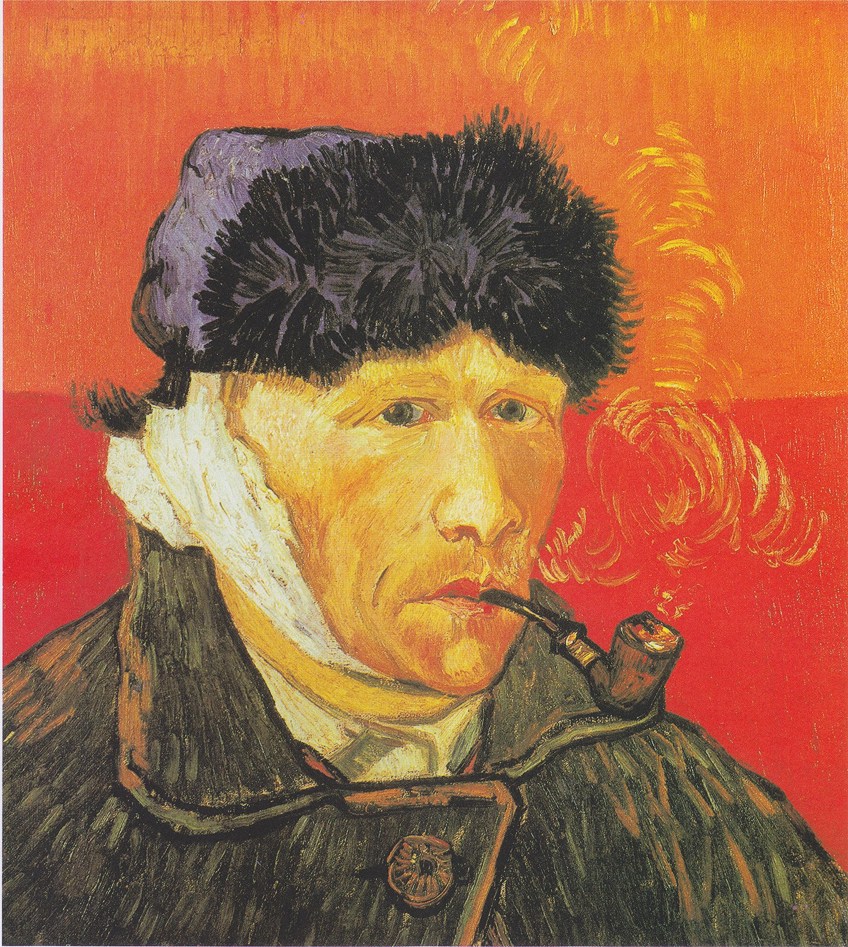 The Rhône is a river with its starting point in the Swiss Alps, which flows through southern France and eventually into the Mediterranean Sea. This river was apparently only a walk away for Van Gogh from the Yellow House, which is when he painted Starry Night Over the Rhône. We can notice the banks of the river in the painting too.

When he stayed in Arles, Vincent van Gogh wanted to paint a scene of the night sky.

In several letters to others, he also expressed this desire and inclination to capture the night and its effects. The Rhône River scene was one of his desires to come true, depicting the effects of light at night. Reportedly Van Gogh sat outside while he painted this scene under a gas lamplight.

A photograph of the Rhône River in the evening, Arles, France; Rolf Süssbrich, CC BY-SA 3.0, via Wikimedia Commons

In this section, we will look at the subject matter and several art elements that make a formal analysis of Starry Night Over the Rhône painting. Color and light were important aspects for Vincent van Gogh, and we will similarly highlight how he conveyed these.

In Starry Night Over the Rhône, Vincent van Gogh depicts a night scene from the embankment of the Rhône River. A vast night sky – illuminated by several small and big, bright, stars – makes up almost a third of the upper part of the composition.

We see the town in the distance, across the river, also illuminated, not by starlight, but by its own, artificial, light scattered about and reflected on the rippled water in front of us, as if they are beams of light reaching from one bank to the other. In the foreground is the quay with several small boats and two figures near the right side facing us, the viewers. They appear to be having a relaxing walk along the riverbank.

In a letter to his brother, dated 29 September 1888, Vincent van Gogh described these figures as “two colorful figurines of lovers in the foreground”.

Color and light are important aspects of this painting and the subject of Van Gogh’s study. He noted the colors he utilized in the same above-mentioned letter to his brother, describing the sky as “aquamarine”, the water as “royal blue”, and the ground as “mauve”.

Furthermore, he described the town in the distance as “blue and purple”, and “yellow” for the gas, and the reflections were a “russet gold descending down to green-bronze”.

We can see the powerful play of light that Van Gogh depicted here, from the natural light above and the artificial light below. The blues and yellows are also complementary, emphasizing the brighter areas of light.

The color value contributes to the lightness and darkness conveyed. There are lighter hues more to the center of the sky and darker hues to the edges.

Vincent van Gogh utilized a variety of brushstrokes throughout this painting, from short and stocky for the sky to more thin and elongated strokes for the bank in the foreground. The brushstrokes are clearly visible on the canvas and create a rich textured composition, highlighting his free and expressive style of painting.

This is also referred to as impasto, which is when the paint is thickly applied onto the canvas. If we zoom in on the painting, we will be transported to a more abstract world seemingly removed from any realism.

We will come face to face with Van Gogh’s hand, how he applied each color and lick of paint, some areas thicker than others. However, the way Van Gogh applied his paintbrush and the resulting physical texture of the paint create a balance and unity in the composition.

There is significant linearity in Starry Night Over the Rhône painting, which is created by Van Gogh’s use of brushstrokes. We see vertical, horizontal, and diagonal lines. A few examples include the horizontal brushstrokes denoting the sky above; the long, vertically curved lines to the left of the composition, possibly depicting a road leading into the town; and the vertical lines of the light reflected on the water, among others. Line, form, and shape as art elements go together with how Van Gogh utilized his brushstrokes, applying them in a seemingly active and vigorous manner.

This in turn creates a sense of movement and rhythm in the composition, and ultimately a unity because of this characteristic style of painting.

The Night Holds Many Colors

Vincent van Gogh exhibited Starry Night Over the Rhône at the Société des Artistes Indépendants, otherwise also referred to as the Salon des Indépendants in 1889 in Paris. This was the same year when he painted his other “night effect”, as he referred to it, The Starry Night (1889), which has become one of his most famous artworks to date. This was also while he lived in the Saint-Rémy-de-Provence in a mental institution after the events with Paul Gauguin.

Van Gogh inspired numerous art styles because of his expressive techniques, some include Abstract Expressionism, German Expressionism, and Fauvism. His expressive use of colors and brushwork set the tone for others to explore outside of the prescribed “lines” of what painting should look like.

Take a look at our Van Gogh Starry Night Over the Rhône webstory here!

Who Painted Starry Night Over the Rhône?

Starry Night Over the Rhône (1888) was painted by the post-Impressionist artist Vincent van Gogh, who also painted other famous artworks like The Starry Night (1889).

Where Is Starry Night Over the Rhône?

Starry Night Over the Rhône (1888) is presently housed at the Musée d’Orsay in Paris, France. It was acquired by this museum in 1975, and before that, it was held in a private collection as well as at the Buffa Gallery in Amsterdam.

When Was Starry Night Over the Rhône Painted?

Starry Night Over the Rhône was painted in 1888 when Vincent van Gogh lived in Arles at the Yellow House at the Place Lamartine in southern France. He painted this scene outside at night under the light from a gas lamp on the bank of the Rhône River.