“The Lady of Shalott” by John William Waterhouse – An Analysis 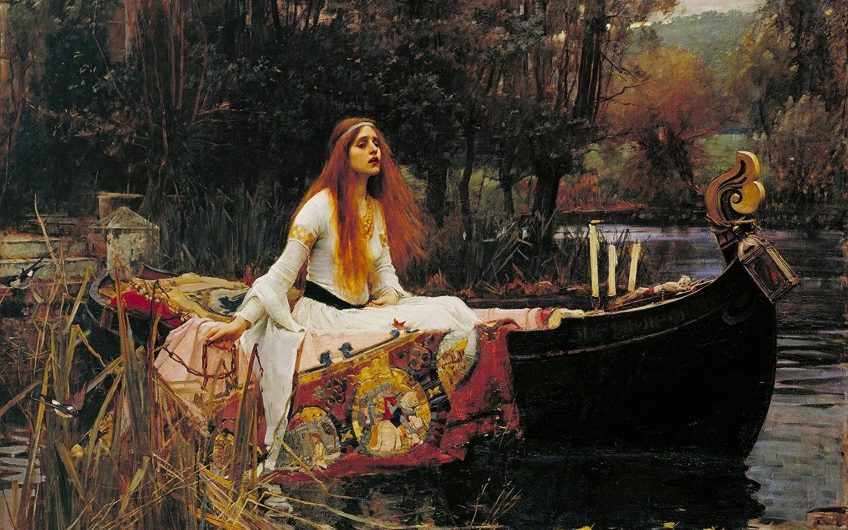 Drifting down a river to find the enchanting Sir Lancelot, the Lady of Shalott finds herself cursed and dead before she can find the handsome prince. This is the tale illustrated by John William Waterhouse in his famous The Lady of Shalott (1888) painting.

His style consisted of elements of the Pre-Raphaelite Brotherhood, and he explored themes related to the different archetypes of women from literature and mythology. 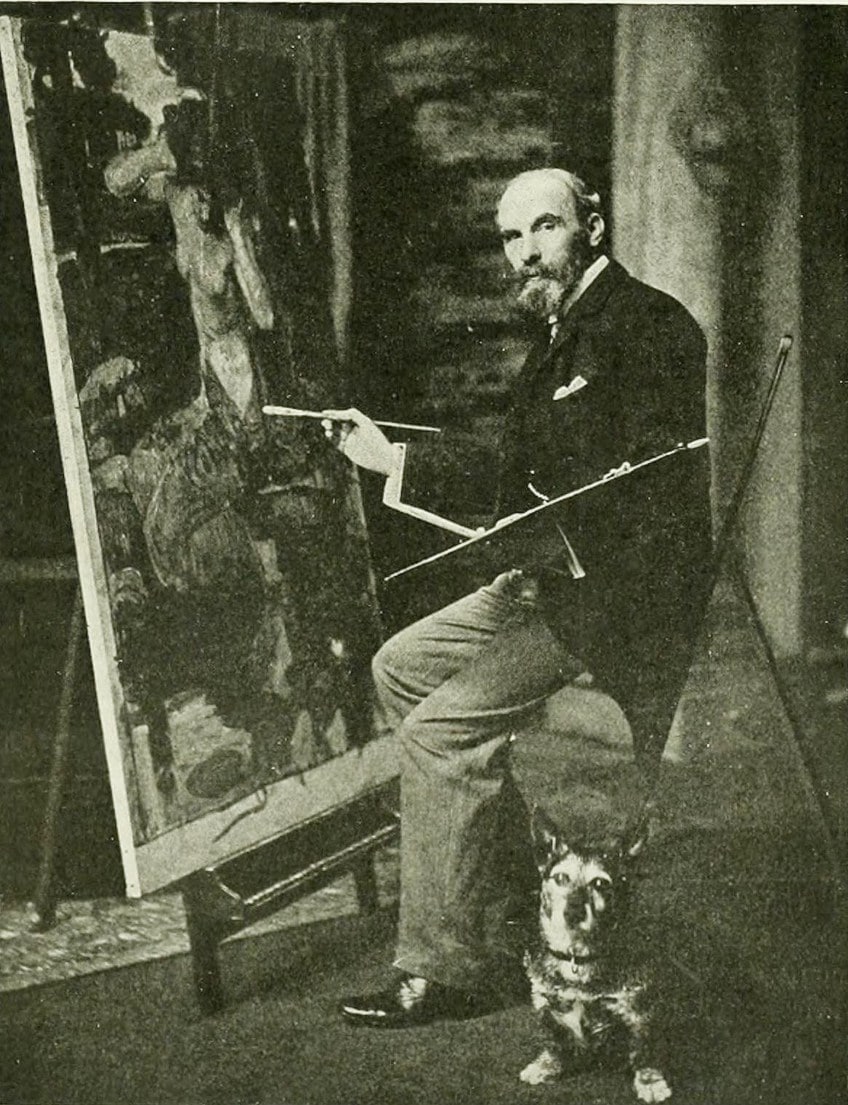 The Lady of Shalott (1888) by John William Waterhouse in Context

In the article below we will explore The Lady of Shalott analysis, starting with a brief contextual overview of what inspired the painting, which will be followed by a formal analysis discussing John William Waterhouse’s artistic style according to the art elements.

The Lady of Shalott painting by John William Waterhouse was based on the famous English Lord Alfred Tennyson’s The Lady of Shalott (1832) poem, which takes place during the Arthurian period, and more specifically the scene from Part Four.

About The Lady of Shalott Poem

The Lady of Shalott poem centers around the main protagonist Elaine of Astolat, who lives on an island, which is named Shalott. There is a river that flows around it leading to Camelot. The Lady of Shalott, as she is known, spends her life living in a tower, which is on the island. However, she is also cursed (she does not know what the curse is) and can only look at the rest of the world, Camelot, through her mirror’s reflection. She is also known to weave her “web” on her loom, consisting of images she sees reflected in her mirror.

According to the poem, one day she spotted Sir Lancelot riding on his horse from Camelot in her mirror; she was completely entranced by him and looked at him, which caused the curse to befall her, and with that, her mirror cracked.

The Lady of Shalott left the tower to find Sir Lancelot, and she got onto a small boat in the water and floated down the river singing her “last song” until death found her. She was discovered by the people who lived in Camelot, including Sir Lancelot, who said that her face was lovely and he wished God to “lend her grace”.

The Lady of Shalott Versions 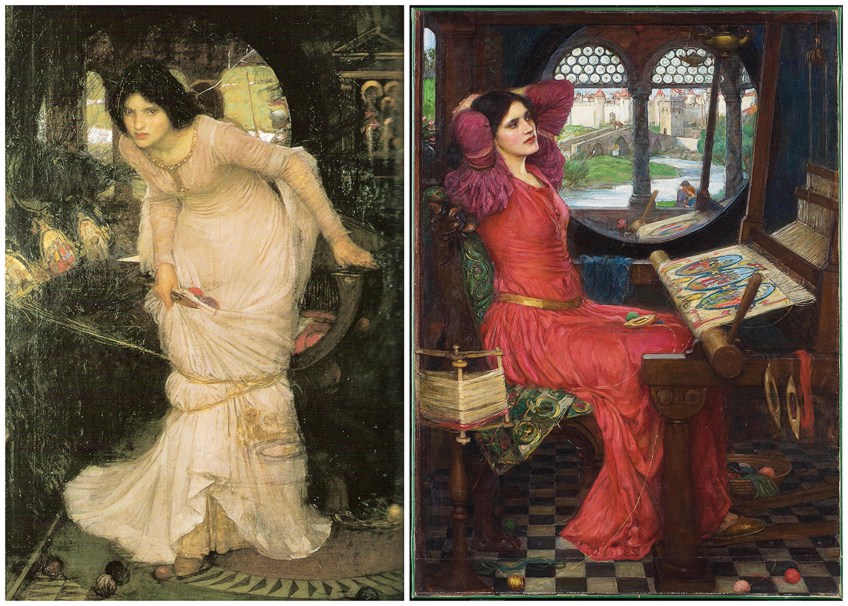 The Lady of Shalott Symbolism

Furthermore, the white of her clothing can also be an indication of innocence or purity.

Below, we look at the painting The Lady of Shalott by John William Waterhouse, starting with a visual description of the subject matter and a more detailed description of the art techniques in terms of the seven art elements, namely color, texture, line, shape, form, and space. 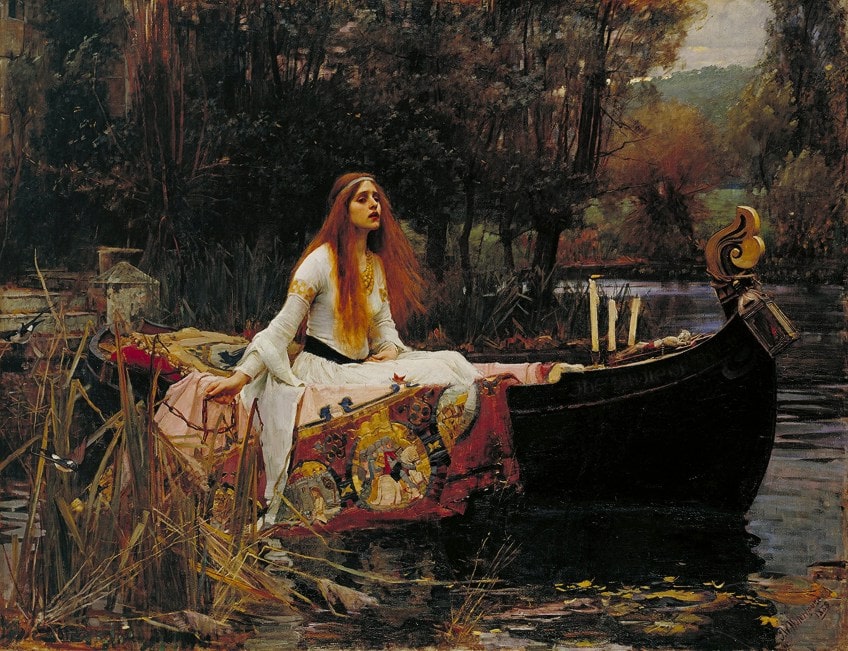 In The Lady of Shalott painting, John William Waterhouse depicts Elaine of Astolat from the Lady of Shalott poem sitting in the boat, loosening its chain, and about to drift off onto the river; she and the boat are centrally placed in the composition. The Lady of Shalott is surrounded by a beautiful and lush natural landscape – the river, trees, and green hills in the far distance beyond the water.

The natural scenery also includes two birds, specifically swallows, to the left in the foreground of the composition. 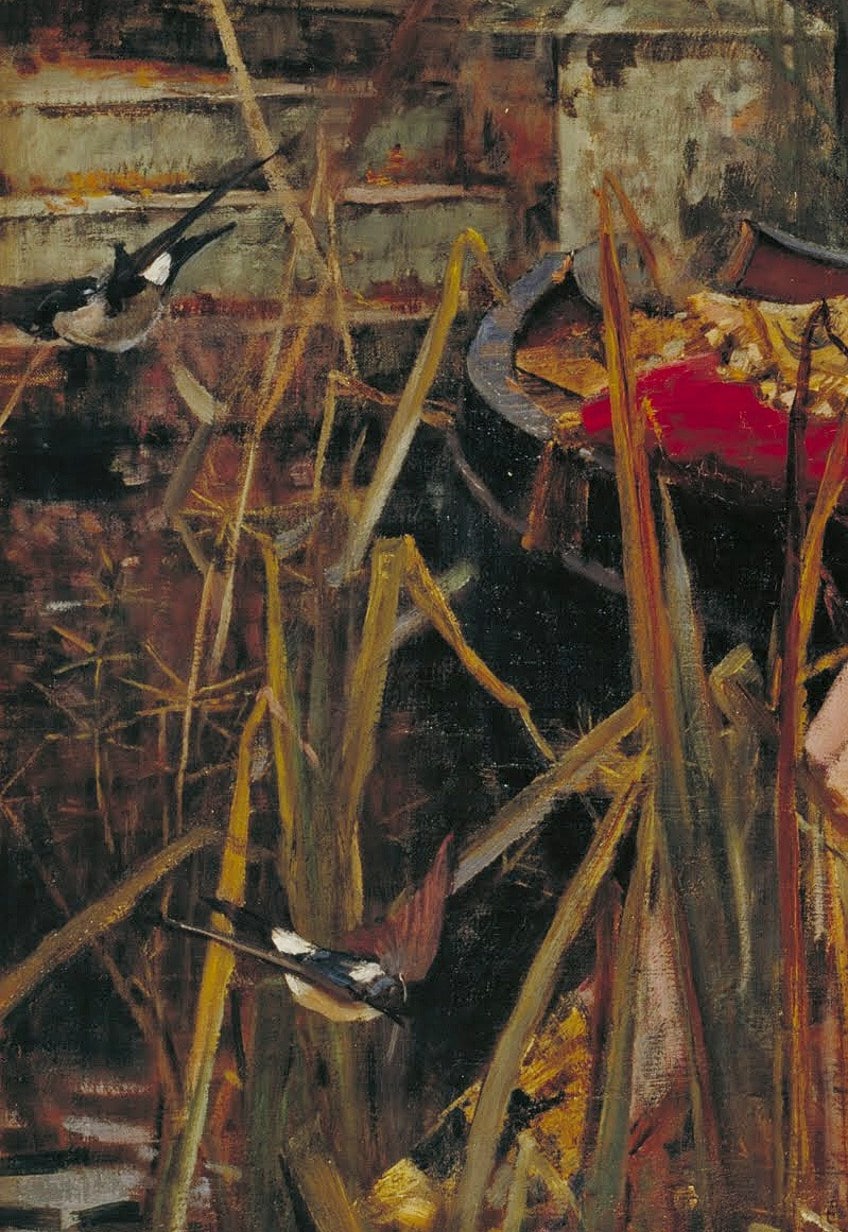 To the left of the composition is a curving stairway that leads to the tower, and possibly where the Lady of Shalott walked down towards the boat. The tower’s stone block wall is partially visible against the left border of the composition with a border of tall trees moving outwards along the middle background.

This border seemingly creates a backdrop for Lady Shalott’s figure in the boat, which is more in the foreground of the composition. 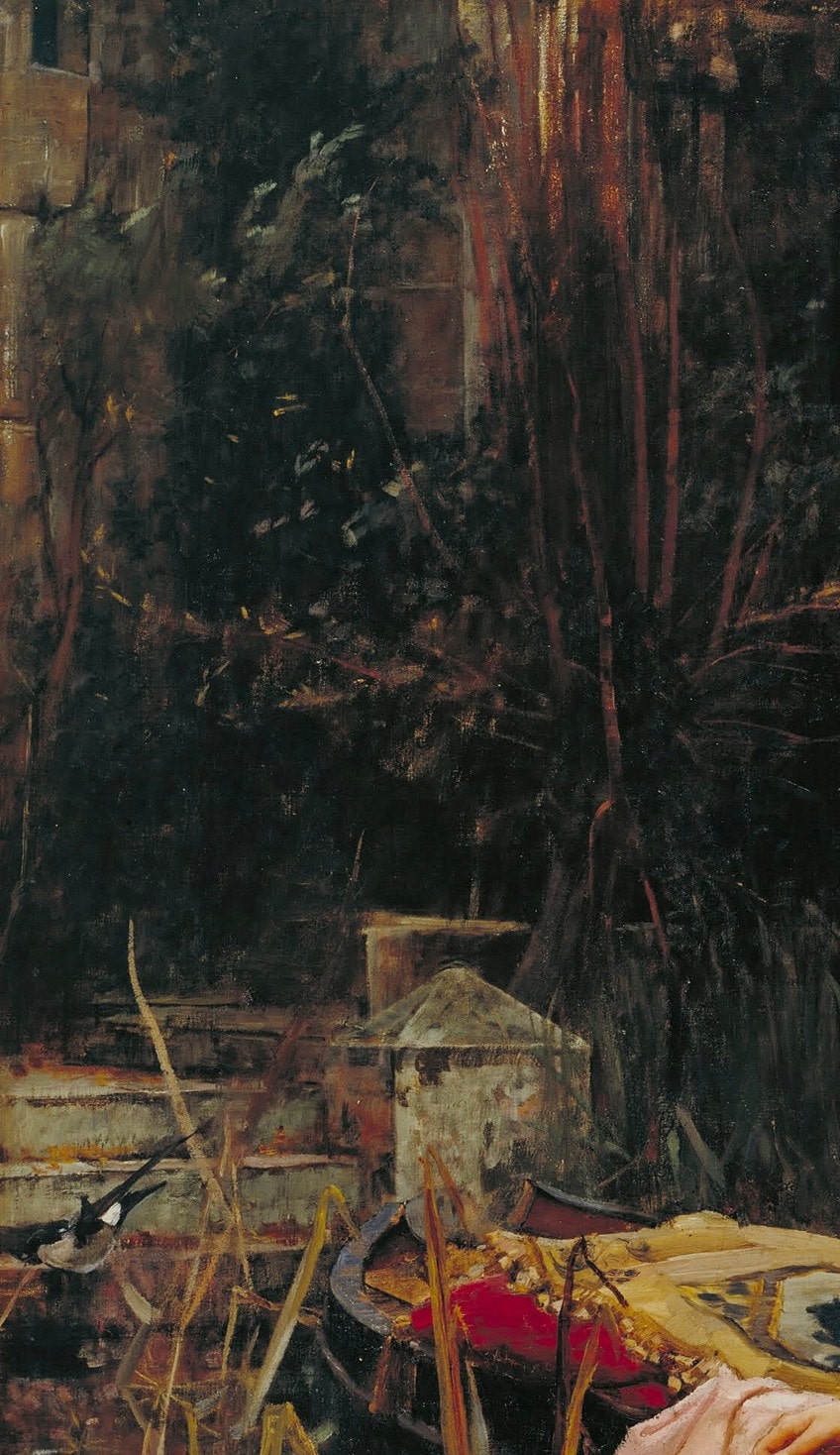 Looking at the central figure, who is the only figure in the composition, is wearing a white gown with golden patterns around the upper arm and her neck, with a black belt around her waist. She has long, red hair with a thin hairband on her head. Lady Shalott is sitting in the boat; her right hand is holding onto the chain she is loosening from the boat and her left hand is resting in her lap in a cupped position with her palm facing up.

She is staring out ahead of her and her mouth is partially open as if she is singing and her lips are red. 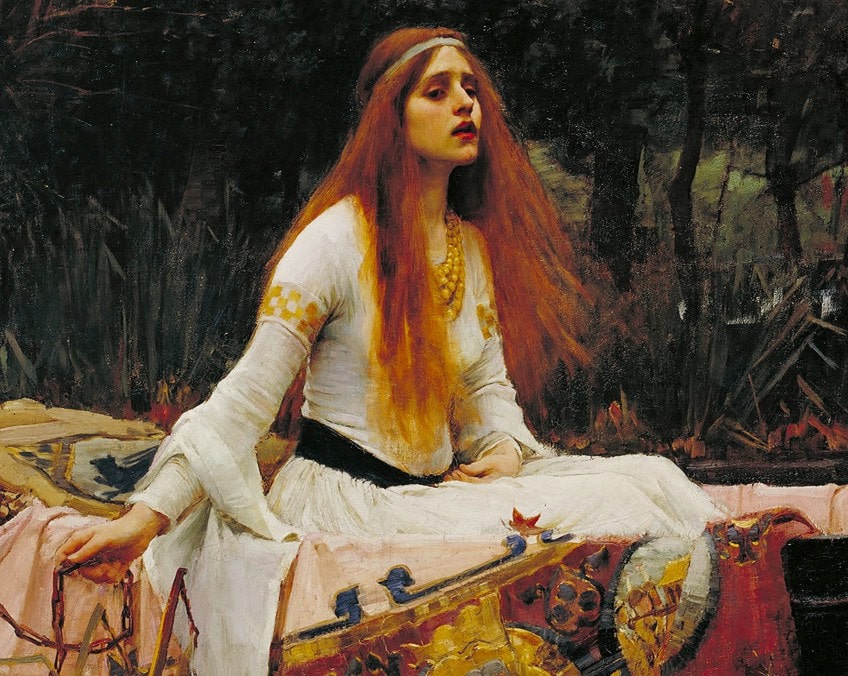 Lady Shalott’s woven tapestries are lining the boat and hang out of the right side of the boat, being that which we, the viewers, can see. She sits on the tapestry, which is a representation of her previous life – one she has left behind in search of love.

The tapestry itself is decorated with images of the world she wanted to be a part of instead. 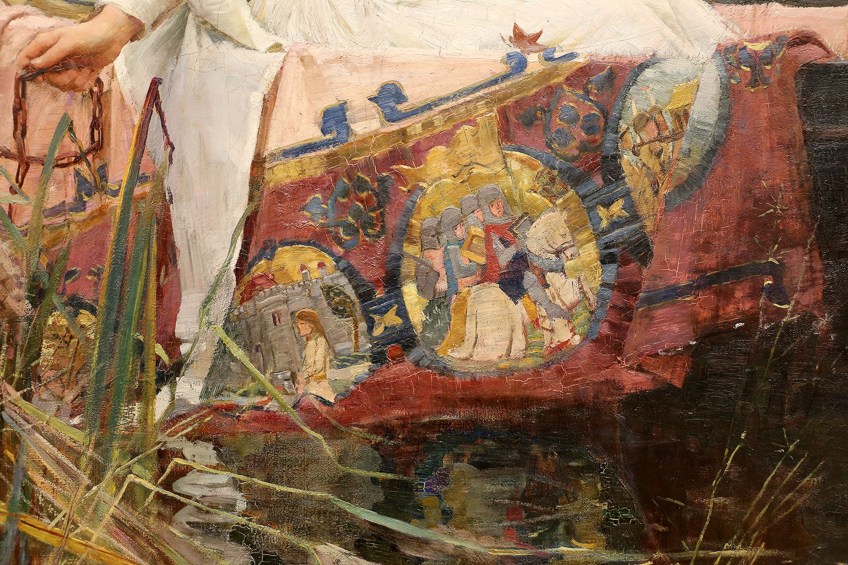 A close-up of the tapestry woven by Lady Shalott in The Lady of Shalott (1888) by John William Waterhouse; Sailko, CC BY 3.0, via Wikimedia Commons

Towards the upper part or bow inside the boat are three long white candles. The one candle on Lady Shalott’s right (our left) has a flame burning, and straining in the wind; the other two candles’ flames are out.

There is also a crucifix with the figure of Jesus Christ on it and a lantern fastened to and hanging on the outside of the endpoint of the boat. 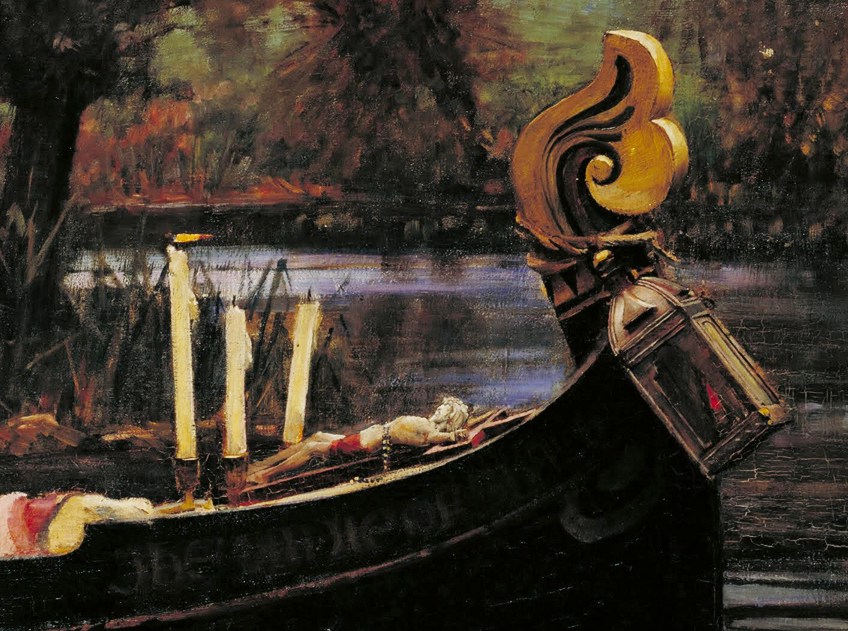 There is an overall natural appearance in The Lady of Shalott by John William Waterhouse, and the colors consist of greens, reds, oranges, browns, blues, and more neutral colors like white and black. The colors are not too bright and have been described as “muted”, which creates a harmonious color scheme.

Furthermore, the scene is set outside and is thus portrayed in natural lighting, which gives it a more naturalistic appearance.

There are darker shaded areas, such as between the trees and foliage and the dark wood color of the boat, which also create a color contrast with the white of Lady Shalott’s dress, further emphasizing her and the narrative of the composition. 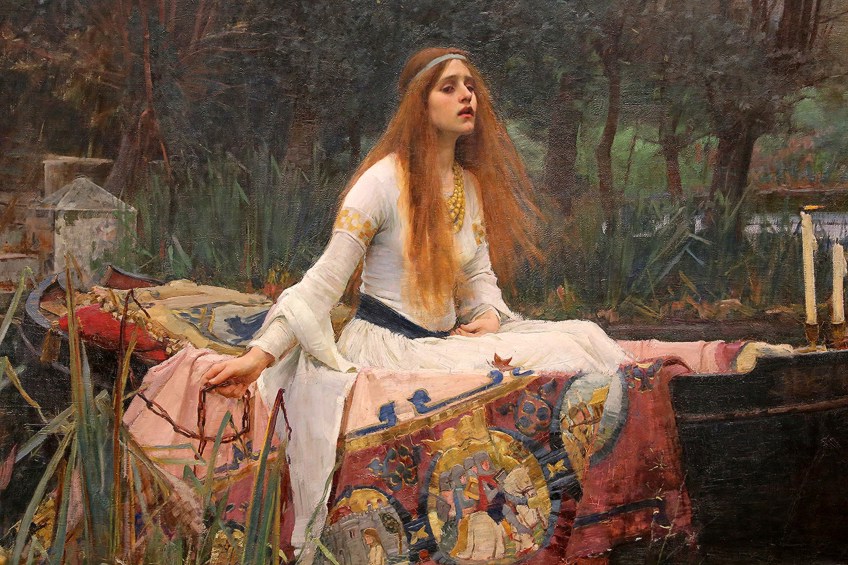 The Lady of Shalott painting appears almost photographic, however, Waterhouse’s technique has been noted to have French Impressionistic techniques in his brushwork; the tactile qualities of the brushstrokes are visible on the canvas and appear loose. There is less of the accuracy and detail that is so characteristic of the Pre-Raphaelite Brotherhood’s art style that the artist was influenced by.

The differences in detail have also been compared to Sir John Everett Millais’ “Ophelia” (1851-1852).

There are also areas of clear brushwork and outlines, which give the composition an almost photographic detail. This can be seen in the boat’s bow as well as the lantern hanging from it.

This is contrasted with the looser and more fluid brushstrokes that make up the foliage (reeds) around the boat as well as near the stairs. 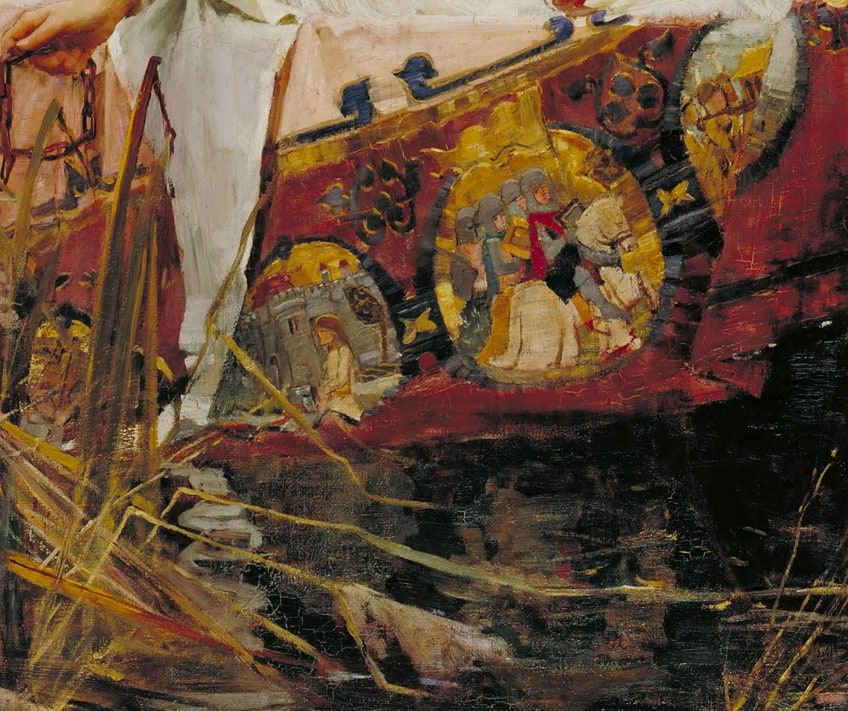 The Lady of Shalott painting depicts a variety of naturalistic and organic lines with subtle contrasts between vertical and horizontal linear placements. Examples include the vertical lines created by the trees in the background, the three candles on the boat’s bow, and the reeds in the left corner in the foreground.

A horizontal line is created by the boat’s position, which fills most of the foreground.

Shape in art can refer to shapes that appear with two dimensions like geometric circles or squares, but shapes can also be organic, in other words, they appear more naturalistic, additionally, lines create shapes.

Form in art is defined as three-dimensional and can also be geometric like spheres or cubes, or naturalistic and organic; shapes also create forms.

There are naturalistic shapes and forms in The Lady of Shalott painting; for example, the trees and natural foliage, the boat, as well as shape of the human figure of the Lady of Shalott. There is a cuboid geometric form created by the lantern hanging from the boat, and a rectangular and pyramidal form composing the stairs to the left. 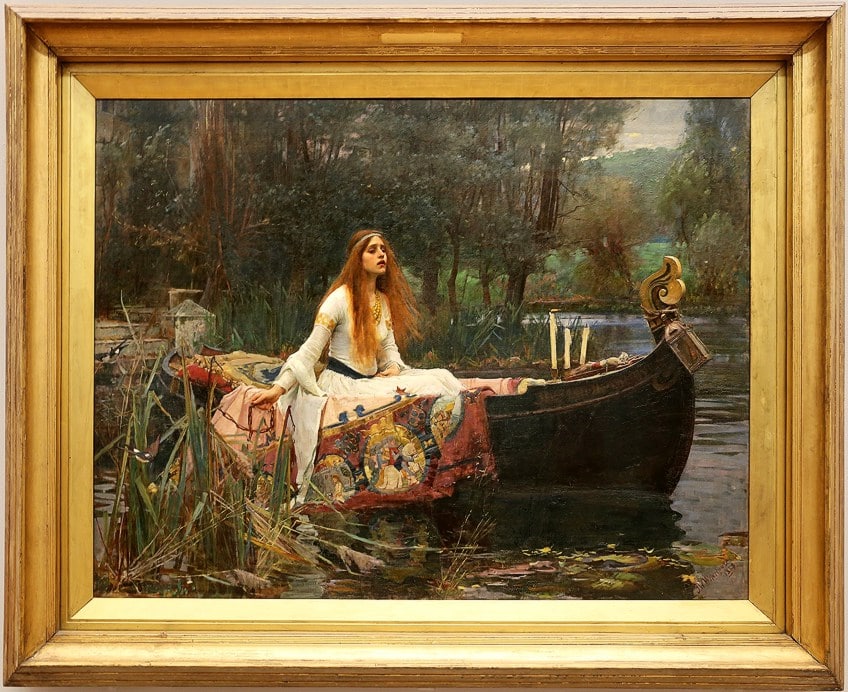 The Lady of Shalott painting depicts a three-dimensional space on a two-dimensional format, which is a canvas, therefore depth is implied. It is created through color and perspective. For example, the background appears hazier in view compared to the foreground, which appears clearer and more detailed.

Other techniques that can be utilized to imply spatial depth include perspective as well as a technique referred to as “overlapping”.

This is evident in how the far background of hills and trees are overlapped by more trees in the middleground, as the boat and Lady of Shalott sit in the foreground, which appears larger because it is closer to us, the viewers.

A Lady of the Ages

In this article, we discussed The Lady of Shalott analysis and looked at the famous Arthurian tale that has inspired numerous artists, most notably the Lady of Shalott, who has become a lady of the ages, so to say from the popular poem written by Lord Alfred Tennyson.

However, beyond the subject matter, “The Lady of Shalott” by John William Waterhouse holds considerable trails of history, from its stylistic tendencies reminiscent of the Pre-Raphaelite Brotherhood, to French Impressionism, as well as to its English roots.

Who Is the Lady of Shalott?

The Lady of Shalott is from Lord Alfred Tennyson’s poem titled The Lady of Shalott (1832), which is about Elaine of Astolat, who is cursed and only experiences life by looking at it reflected in her mirror. She died from the curse when she looked at Lancelot one day and attempted to get in a boat to find him.

Who Painted The Lady of Shalott?

The Lady of Shalott (1888) was painted by John William Waterhouse, who was an English artist influenced by the Pre-Raphaelite Brotherhood art style and movement. He was known for painting in similar realism and subjects that related to Greek mythology as well as Medieval tales like those of King Arthur.

Where Is The Lady of Shalott Painting?

The Lady of Shalott (1888) by John William Waterhouse is housed at the Tate Britain in London. In 1894 the painting was donated by Sir Henry Tate, who was the founder of the Tate Gallery. The painting was part of his extensive collection of artworks that he originally donated to the National Gallery but was then moved to the Tate Britain, which was started in 1897.