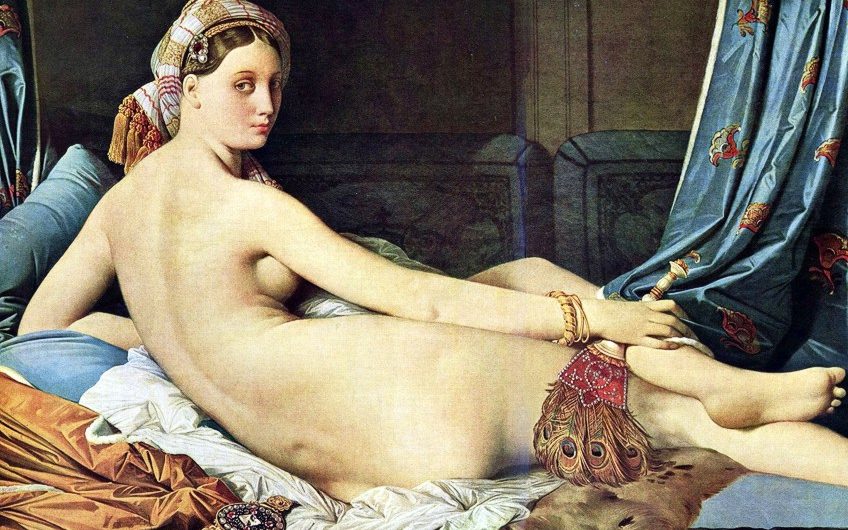 La Grande Odalisque (1814) by Jean-Auguste-Dominique Ingres has become one of the most loved Romantic paintings. In this article, we gaze into the secret abode of a woman waiting in the nude, but for whom, we are only left to guess.

Artist Abstract: Who Was Jean-Auguste-Dominique Ingres?

Jean-Auguste-Dominique Ingres was a French artist, born on August 29 in 1780, and died on January 14 in 1867 of pneumonia. He was born in the town of Montauban in Tarn-et-Garonne in France. In his early schooling years, when he was 11 years old, he attended the Académie Royale de Peinture, Sculpture, et Architecture in Toulouse, France.

He later became a student of famous painter Jacques-Louis David in Paris.

Ingres was a Neoclassical painter, who followed the tenets of Academic art, but he was also known for his Romantic paintings. Some of his famous artworks include The Ambassadors of Agamemnon in the Tent of Achilles (1801), Napoleon I on His Imperial Throne (1806), and The Valpinçon Bather (1808). 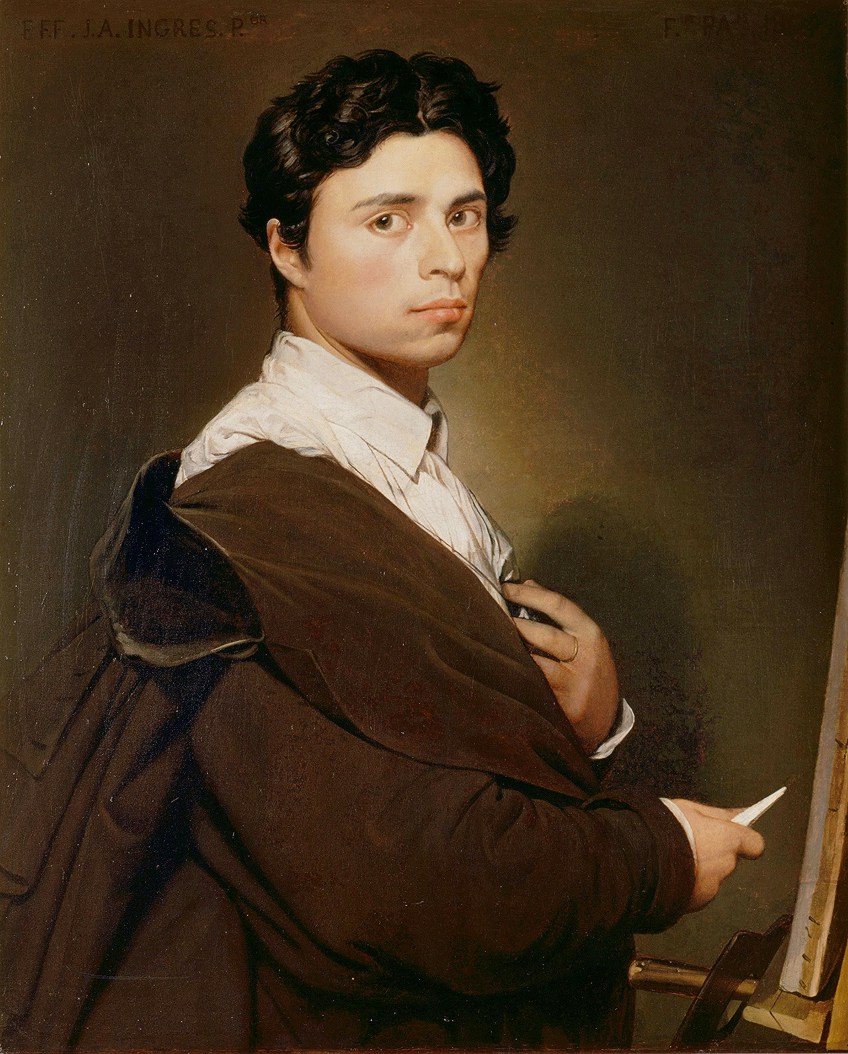 Below we will discuss a brief contextual analysis of La Grande Odalisque by Jean-Auguste-Dominique Ingres, focusing on the circumstances around when he painted it, which will be followed by a formal analysis, discussing the painting’ subject matter and how it is composed according to the art elements.

La Grande Odalisque was commissioned by the Queen of Naples Caroline Murat, who was Napoleon Bonaparte’s sister and married to Joachim Murat. She commissioned Ingres for several paintings, including the Portrait of Caroline Murat (1814), which is housed in New York as part of a private collection. 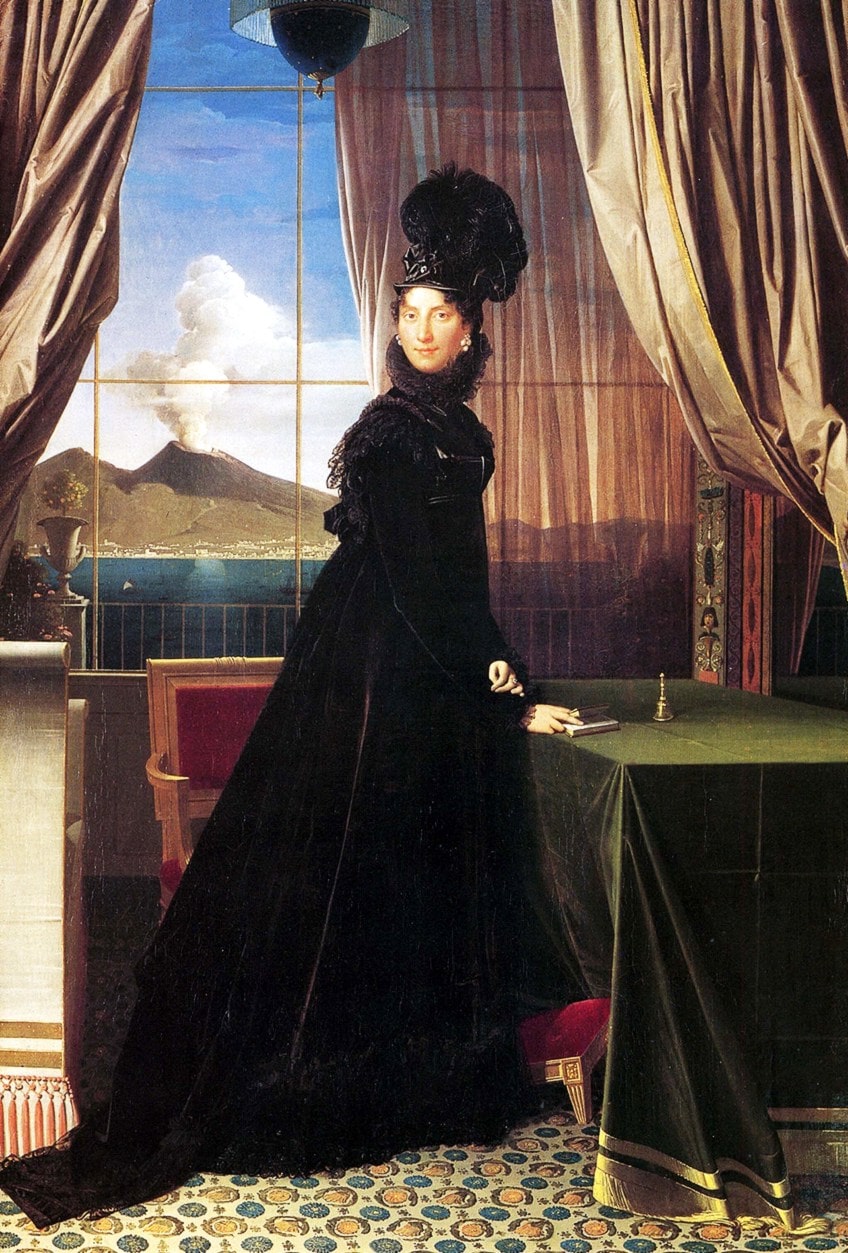 La Grande Odalisque by Jean-Auguste-Dominique Ingres is often considered to be one of the artist’s first paintings to exemplify his exploration of Romanticism and, as it has been described, more “exotic” subjects like concubines.

Ingres, who has been widely regarded as upholding a “cultural conservatism” in his artworks, was also taught by the acclaimed Neoclassicist Jacques-Louis David, the latter of whom’s artistic style was defined by the principles of rationality, reason, order (characteristics of Neoclassicism), as well as the classical ancient Greek and Roman idealizations of the human form.

Jacques-Louis David’s artworks have been described as “linear” and “minimal” in style – limiting the use of colors and keeping to clearly delineated forms.

Jean-Auguste-Dominique Ingres’ subject matter has also been described as moralistic, depicting historical narratives and characters, a popular example of which is his oil-on-canvas artwork, Oath of the Horatii (1784).

Undoubtedly, Ingres followed these classical and Academic styles and traditions taught to him by David.

He was also influenced by the Renaissance master Raphael, but the former shifted his artistic techniques, most notably evident in his nudes with “elongated” limbs like we see in La Grande Odalisque, which caused quite a stir when it was exhibited at the Paris Salon in 1819. 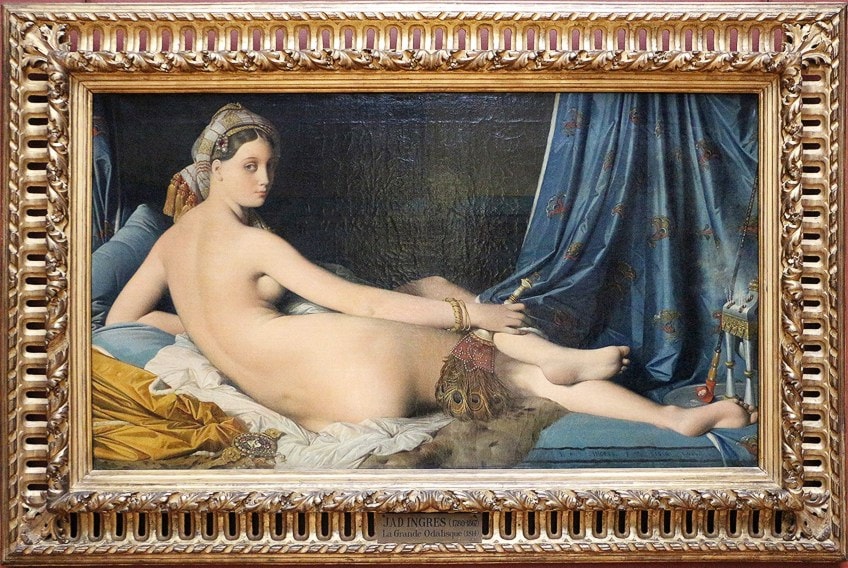 When Ingres painted La Grande Odalisque it was at a time in western history when the “Orient” was a keen point of interest, and while we will not go into the rich, complex, and extensively studied the history of what it means here, it is important to note its influence on western society, especially in France.

With various new discoveries in the Middle East, as well as Napoleon Bonaparte who conquered Egypt in 1798, the west became more familiar with exotic cultures, and some who did not visit these places learned from the accounts of others, Ingres was notably among one of these and widely described as an “armchair Orientalist”.

When we look at the “La Grande Odalisque” painting, it is important to remember what we are looking at and that is not necessarily a true account of a Turkish concubine, but one embellished with the French’s cultural ideas and concepts of the subject matter, specifically what Ingres may have seen or believed.

Below, we will look at La Grande Odalisque by Jean-Auguste-Dominique Ingres in more detail in terms of the subject matter followed by an analysis of the compositional format according to the seven art elements. 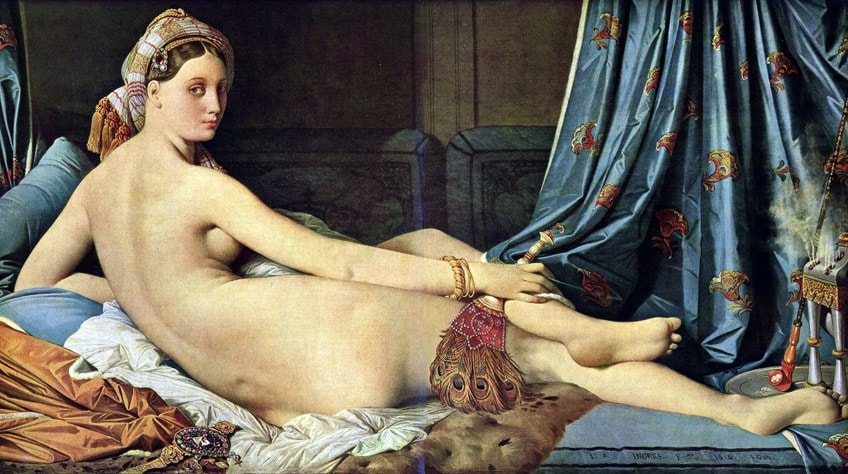 The La Grande Odalisque painting by Ingres depicts a nude woman half lying down and leaning on her left elbow on a divan, which is a couch or mattress without a backrest or arms, and originating from the Middle East. Surrounding her are soft, satiny, materials and what appear to be several cushions against a wall in the background. She is reclining with her back to us, the viewers, but her head is turned so that she is peering over her right shoulder, looking directly in our direction.

Some sources state that it could possibly be that she is looking at someone who may have just entered the room. 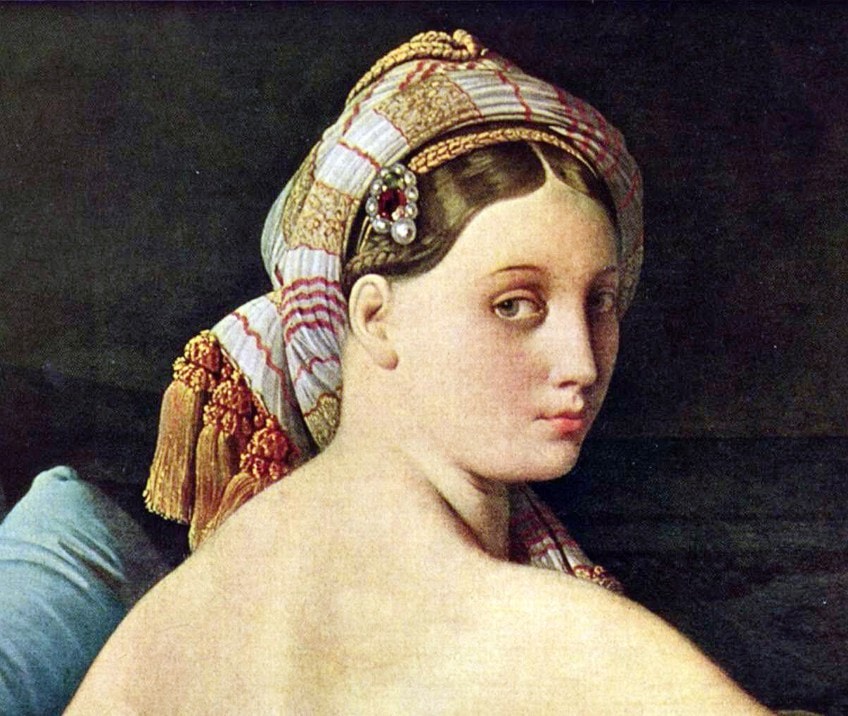 She holds a fan made of peacock feathers in her right hand, and although she is completely nude, she is wearing jewelry, namely gold bracelets around her right wrist; one is thicker and the other two are thinner. She is also wearing a turban on her head with some of her hair showing; she appears to have dark brunette hair and there is a bejeweled broach fastened to the right side of what appears to be a golden hair band over her hair. Looking more towards the left, behind her back, is another item lying on the sheets; it is bejeweled and golden, and could possibly be a belt of sorts.

To the far right of the composition is a tray with a hookah pipe on it.

It is important to note that La Grande Odalisque by Jean-Auguste-Dominique Ingres has an elongated back, and one that appears to be out of anatomical proportion, but looking at other parts of her anatomy like her legs and right arm, they too appear disproportionate.

According to results from a medical study measuring the accuracy of Ingres’ depiction of La Grande Odalisque, it was found that she had more vertebrae – notably, around five more lumber vertebrae were added.

Ingres explored idealized depictions of the human body and reportedly the elongated back is a stylization and depiction of beauty through the linear technique that has become so characteristic of Ingres’ artistic oeuvre. 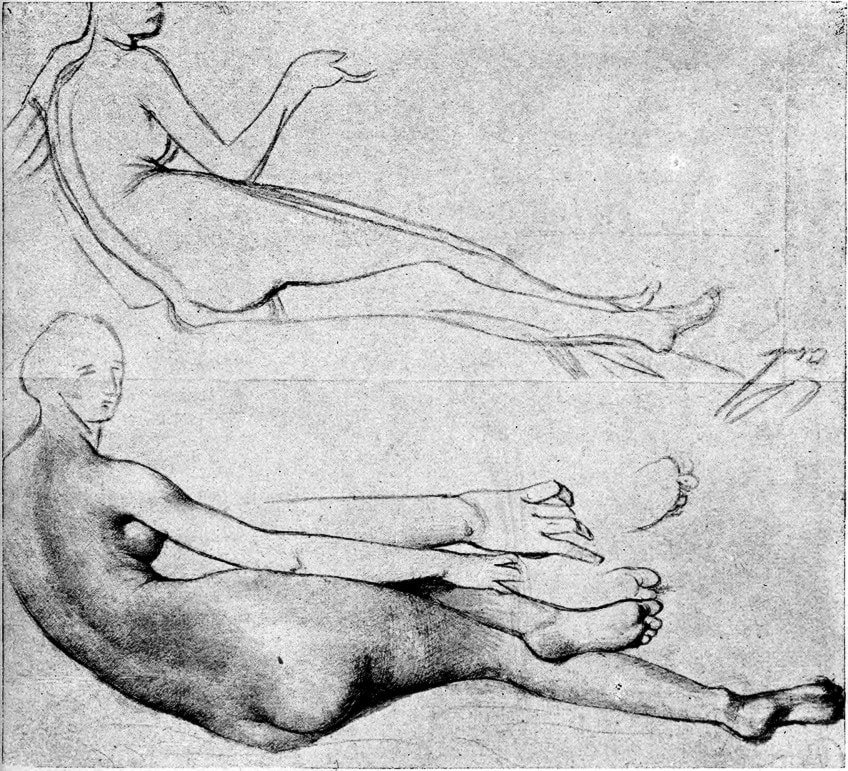 There is a minimal utilization of color in La Grande Odalisque painting, and the color scheme that is visible appears delicately contrasted. For example, the main figure is depicted in a pale skin tone, which appears light and warmer in temperature.

In contrast, the background and surroundings include rich and cooler blues with some mustard-golds and whites on the sheets.

Ingres’ mainly applied curved lines (otherwise described as “sinuous”), especially noticeable in the unnatural curvature of the figure’s back, as mentioned above, but also echoed in the curves from the folds of the drapery and sheets.  There are several more geometric lines created from the hookah to the right.

Thus, the composition has an overall fluidity of lines, which adds a sensuous feeling to the subject matter depicted.

Ingres painted in smooth and delicate brushstrokes to create varieties of implied textures, which all create realism in the composition. This can be seen in the texture in the figure’s fair skin tone, the satin texture of the drapery and sheets, the turban, jewelry, the hookah and pipes, as well as the feathers of the fan. Shape and form in art can occur in numerous varieties and namely, organic or geometric, Ingres’ La Grande Odalisque painting consists mostly of organic shapes and form, which is mostly rounded and naturalistic, notably the main figure.

Furthermore, Ingres distorted the figure’s form through her elongated back and limbs in order to accentuate ideals of beauty and attraction.

The La Grande Odalisque painting is composed of nothing more than the nude woman, she is placed close to us, the viewers, in the foreground, and the background, which appears to be a wall brings her further into the foreground highlighting her as the focal point. Her right big toe is slightly cut off from the composition, also suggesting a space we, the viewers, cannot see.

In this article we briefly explored one of the most famous Oriental paintings by Neoclassicist and Romantic painter Jean-Auguste-Dominique Ingres, La Grande Odalisque, which is a grand pictorial display of ideals of beauty, as well as the intimacy of a gaze – one that we, the viewers, can see, and one that is assumed to come from someone looking in, most possibly a male and more specifically a sultan, whom the woman would have been in service to.

This painting is also a fine example of a western worldview of “Oriental” cultures and what has been termed the “other”. It depicts Ingres’ mastery of artistic skills and techniques while veering away from a completely realistic subject matter, romanticizing the object of affection, and simultaneously depicting the idealized “Venus” figure in more of a real-world guise – a concubine.

The French Neoclassicist artist Jean-Auguste-Dominique Ingres painted La Grande Odalisque in 1814. He was a student of the highly regarded Neoclassicist Jacques-Louis David, but also explored different artistic styles like Romanticism and Orientalist approaches that moved away from his teacher’s principles.

La Grande Odalisque (1814) was commissioned by Caroline Murat, who was the Queen of Naples. She commissioned several other paintings from Ingres and reportedly admired his work.

Where Is La Grande Odalisque Now?

La Grande Odalisque (1814) is housed in the Musée du Louvre in Paris, France, which was acquired through purchase in 1899.