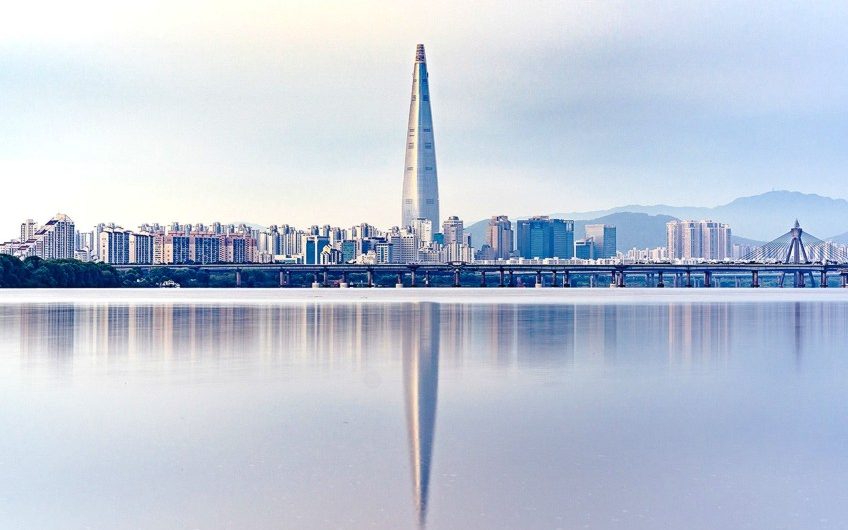 It is a future-oriented city where authentic Korean beauty, globalism, human technology, and nature coexist.

History of the Tallest Building in Seoul: The Lotte World Tower

The Lotte Group company applied for a license to develop a 123-floor tower near Han River in September 2010, and the proposal was authorized by officials in November. Construction for the Lotte tower in Seoul started in March 2011. A celebrational ceremony was performed in December 2015 to mark the structural completion of the skyscraper. After the parapet work was finalized in March 2016, the skyscraper was completed. Lotte World Tower formally launched on the 2nd of April, 2017.

Fireworks were launched from the tower to commemorate the occasion. 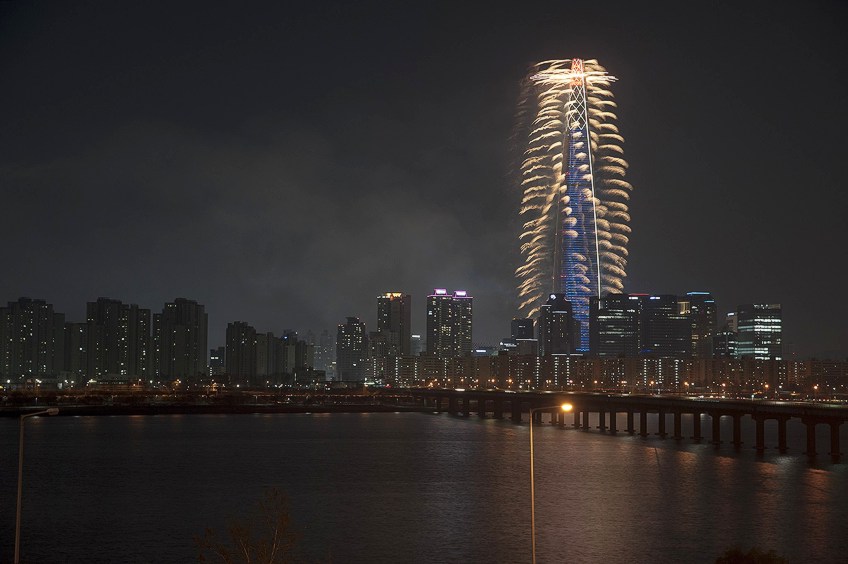 The fireworks display held at the opening of Lotte World Tower in 2017; HyunJae Park, PDM-owner, via Wikimedia Commons

The Lotte World Tower contains offices, a mall, and Lotte Hotel. A tapering design with a vertical line running along the tower alludes to the importance of pottery and calligraphy in Korean culture. Lotte World Tower hints at the city’s past heart, exhibiting the beauty and progress that has occurred in Seoul, while its sleek and reflecting design contrasts with the adjacent mountain range.

The architects were inspired by traditional Korean forms of art such as porcelain, ceramics, and calligraphy while designing the structure.

The design of the skyscraper is softly tapered and includes a continuous curve that is accented by the insulated silver glass and white lacquered metal filigrees reminiscent of Korean craftsmanship. The structural framework of the skyscraper is composed of a gravity-resistant design and a lateral force-resisting structure. 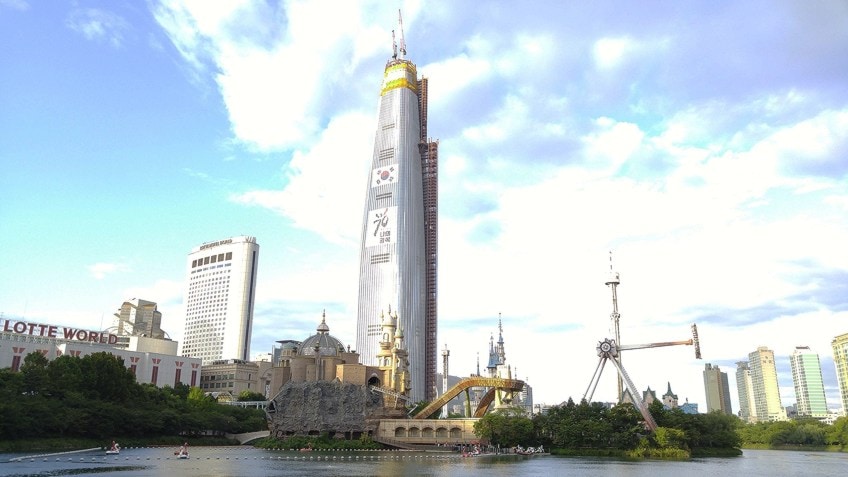 Construction of the Lotte World Tower in 2015; Seongrae Kim, CC BY 3.0, via Wikimedia Commons

The gravity-resistant design is made up of massive columns, core walls, and a deck slab construction supported by steel beams. The core walls are positioned in the center of the skyscraper and extend up to the 123rd story, while the mega columns surround the periphery.

The core walls bear 60% of the skyscraper’s weight, while the massive columns bear the other 40%.

The lantern-shaped roof design was finished on the 17th of March, 2016, prior to the last phase of exterior construction. The roofing component was built using steel equivalents that are 12 meters long and weighed 20 tons apiece. 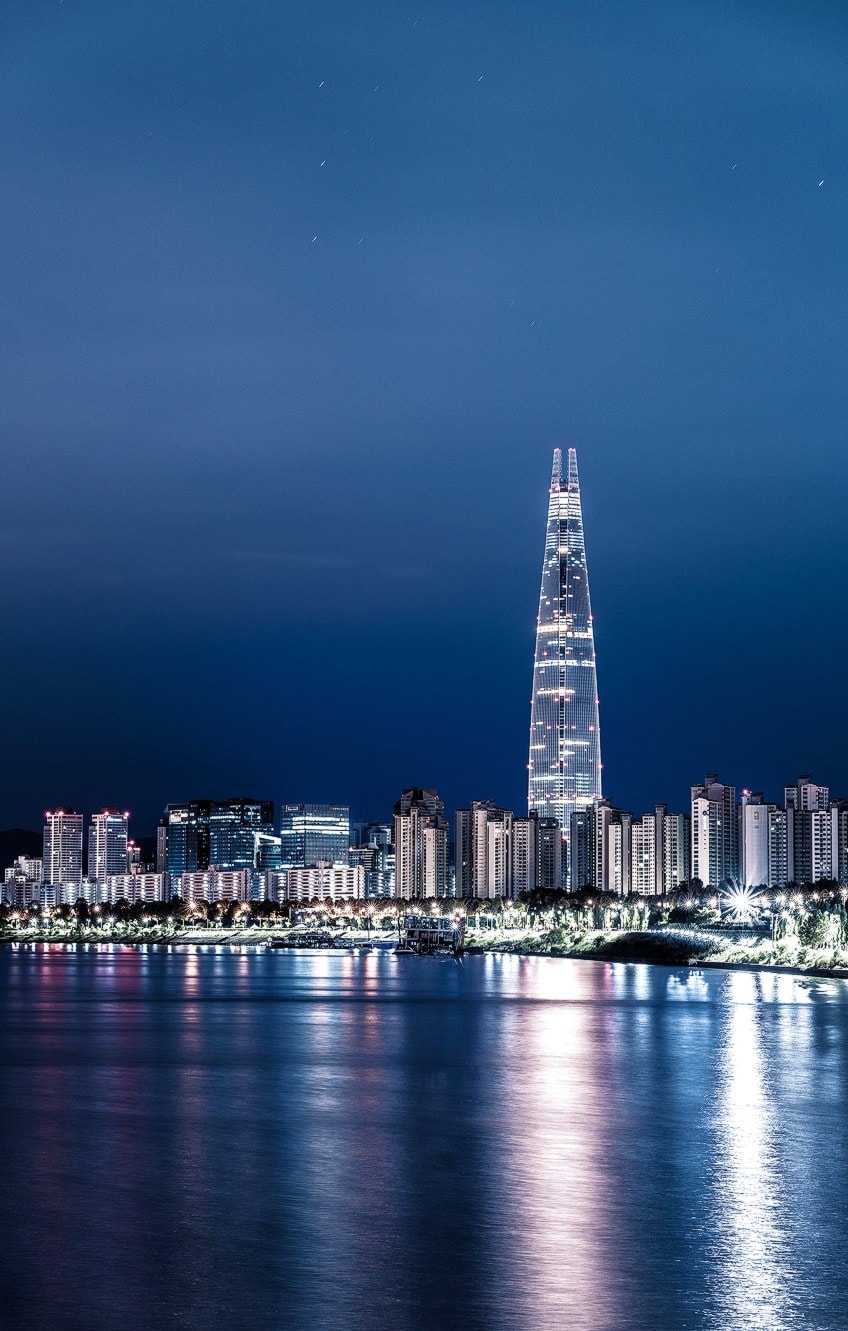 The Lotte World Tower can be seen in this photograph of the Seoul skyline at night; mauveine.kim, CC0, via Wikimedia Commons

The edifice’s counterparts were fashioned of 6 cm thick curved metal plates. The roof component is 120 meters high and comprises levels 107 through to level 123. The roof was built with around 3,000 tons of steel pieces, GPS alignment equipment, and highly competent welding workers. The roof structure was created to bear its load without supporting columns, and withstand earthquakes and extreme winds. A thin cone with convex, slightly curved ends is the trademark feature of the conceptual design.

The Lotte World Tower has Gold-rated LEED-approved sustainability features. Instead of standard air conditioning, the skyscraper uses displaced air and a floor heating/cooling system in the atrium foyer. To extract the air, exterior devices are outfitted with energy recovery rotors. To meet the building’s power demands, a variety of renewable alternatives such as photovoltaics, geothermal, and wind spire turbines were also installed.

What Is Housed Within the Lotte World Tower’s Floors?

The Lotte World Mall, which debuted in 2014, occupies the first 10 stories of the skyscraper. The Lotte Concert Hall, which seats 2,000 people, is part of the mall. The Lotte World Tower also has a cultural center, a children’s park, an aquarium, and a jazz bar. The Seoul Sky Observatory is perched atop the Lotte World Tower. It is the only site where you can get a breathtaking 360-degree view of Seoul brimming with great history and lively modern culture.

The Observatory provides a broad range of one-of-a-kind views and experiences that can only be enjoyed at an exhilarating height of 500 meters in the sky, including several exhibitions themed “The Pride of Korea”. 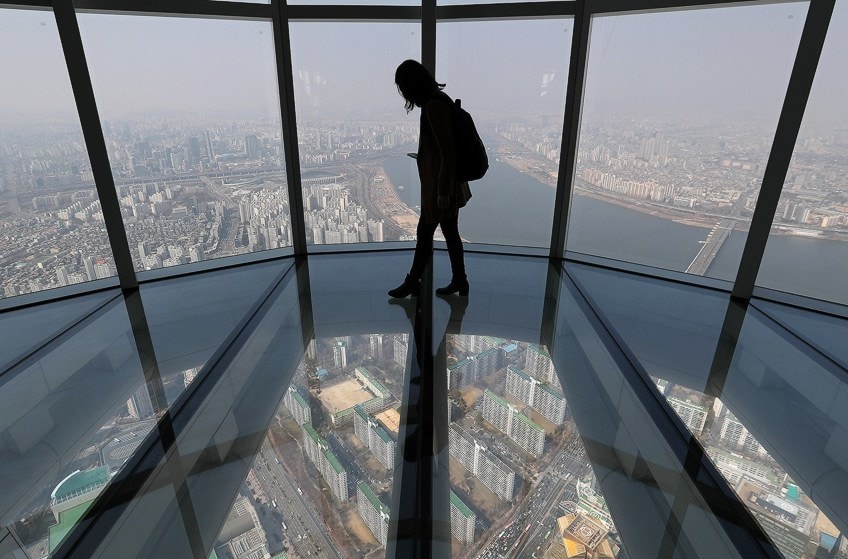 Visitors may witness all of Seoul Sky’s numerous features, which change with the various seasons and periods of the day. The observatory has the world’s tallest glass-bottomed viewing deck thanks to the glass floor. The observatory opened on the 3rd of April, 2017, and the management expects it to draw 50 million people each year. Tourists can reach the viewing platform through the super-fast elevators, which climb at a rate of 20 m/s and are said to be the speediest elevators worldwide, whisking guests from the lowest floor to the viewing platform on the top level in a single minute.

Seoul Sky also contains a secret garden area that is located more than 500 meters above the street level. 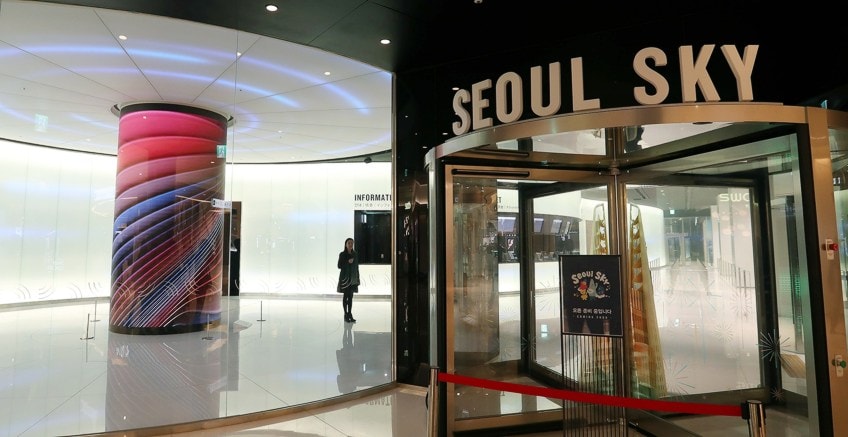 From the deck, one can also view the spectacular sky mapping show which features amazing projection and fireworks displays. Seoul Sky in the Lotte World Tower also features an exhibition space. It is a unique area where you may experience the historic elegance and glory of Korea via varied multimedia material expressing the balance of Yin and Yang, which ensured the progress and success of the project.

You may experience both physical and emotional Korean cultural history in a venue that represents the creative beauty and uniqueness of the Korean language.

The Exhibition Zone displays works exhibiting the architectural magnificence of Seoul Sky, one of the country’s architectural marvels, as well as a distinctive Korean-style rest space. In the Sky Theater, special multimedia material has been created for days when viewing is reduced due to bad weather, allowing you to experience a variety of clear-day landscapes using time-lapse footage. There is also a luxury lounge with a vista of the top level via the high and gorgeous enclosure where you may enjoy a range of cuisines. The Seoul Sky Cafe can also be located in this area, featuring their special signature drinks.

The recently built Sky Bridge enhances the Seoul Sky community amenities on the structure’s topmost levels. Guests of the Sky Bridge start their adventure on the 114th story, where they ascend the extra floors to access the open-air feature situated just above the 123rd floor. The 11-meter bridge connects the tower’s two peaks, which are 541 meters above surface level. Guests walking the bridge may enjoy panoramas of the town and get a thorough view of the architectural pinnacle of the Lotte World Tower while being safely tethered.

The hotel’s ideal position makes it conveniently reachable from major Seoul tourist attractions like Euljiro, Myeong-dong, and Cheonggyecheon. The Club Floor provides sophistication and elegance, in addition to the distinctive rooms built by four world-renowned interior designers to represent the newest trends. Furthermore, the hotel offers high-end facilities for luxurious weddings, family reunions, big global conventions, and corporate events, as well as the best restaurants for entertaining state dignitaries and other VIPs. The hotel provides customized programs and therapies for each visitor according to their personal lifestyles. The greatest dishes prepared by world-famous chefs are also prepared daily.

Three construction employees died during the building’s development in 2013, and an executive director was sentenced to 8 months in jail for his involvement in ignoring safety standards on the project. After some water was discovered seeping from an interior aquarium, the Seoul municipal council demanded that the shopping mall and theater complex be shut down for five months in December 2014.

External engineers who inspected the structure determined that these flaws had no bearing on the tower’s fundamental structural stability, and the mall and theater facility reopened in 2015.

Vitaliy Raskalov, a climber of great structures across the world, ascended the 610-meter-high Lotte Tower in Seoul in 2016. The Russian photographer known for scaling high skyscrapers and structures all around the globe as part of his “OnTheRoofs” campaign published a shot of himself perched on the trusses of Lotte Tower the next day. When word of Raskalov’s visit to South Korea broke, Lotte authorities worked hard to steer the climber away from its then under-construction facilities.

The corporation even put up posters to prevent Raskalov from approaching the building site, but they plainly didn’t work. Raskalov and his Ukrainian colleague Vadim Makhorov are blacklisted by building managers across the planet since their profession involves going to the peak of high structures and photographing the surroundings.

However, it is unknown if Makhorov was there when Raskalov conquered the Lotte Tower. 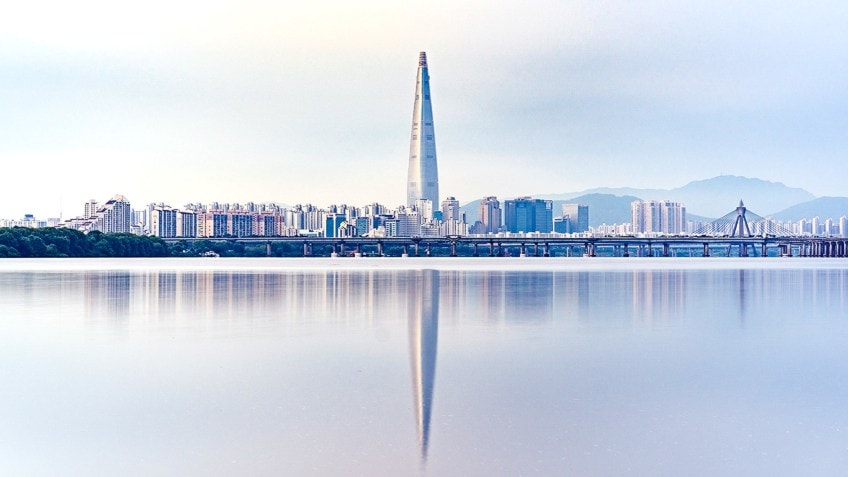 A view of the Han River and the Lotte World Tower in Seoul, South Korea; mauveine.kim, CC0, via Wikimedia Commons

The tower was designed to serve as a multi-purpose building that would reflect the history and culture of the South Korean people. It has broken records for its height locally and is recognized as one of the top five tallest skyscrapers around the world. Despite its height, it has even been climbed by daredevil urban climbers. To end off, we would like to look at a few more interesting facts about South Korea’s tallest building.

Not only is the Lotte Tower in Seoul Korea’s tallest building, but it is also a very important part of everyday life for the people of Seoul. With its many facilities, it offers locals and tourists alike, an endless array of recreational and retail experiences, as well as an incredibly luxurious hotel. The design of the Lotte World Tower is not only practical, but it is also sustainable, and a perfect representation of Korean traditional aesthetics and modern architectural design.

What Is the Lotte World Tower’s Height?

How Many Lotte World Tower Floors Are There?

In total, there are 123 Lotte World Tower floors. And those floors contain 2,917 steps from the lowest to the top level of the building. Some people have even walked every step of the tower, such as in 2018 when the vertical marathon known as Sky Run took place there. The lower floors of the tower contain offices and the mall, as well as facilities such as parks for children and a cinema theater. The upper floors of the building contain Seoul Sky, a complex that features a sky bridge as well as an observation deck from which to view the entire city. 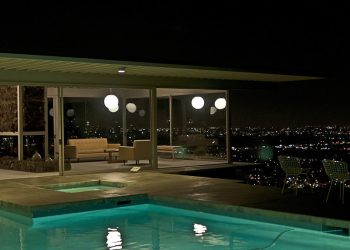