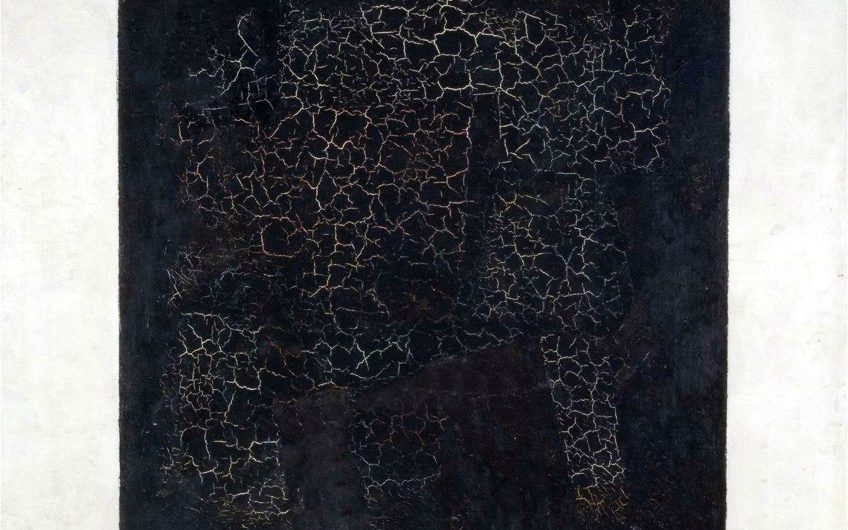 A black square bearing the ideals of a new reality, it is something beyond the world of representational reality and directly feeds into the world of feeling. This article will explore one of the most revolutionary Malevich paintings, the Black Square (1915).

Artist Abstract: Who Was Kazimir Malevich?

Kazimir Severinovich Malevich was born in Kyiv in Ukraine on February 23, 1879, and died from cancer on May 15, 1935. He was a famous Russian avant-garde artist who started the Suprematism art style and theory, pioneering non-objective Abstract art in Russia as well as the world. He started art from a young age and studied at the Moscow School of Painting, Sculpture, and Architecture. He was influenced by various styles, from Impressionism, Cubism, and Futurism. 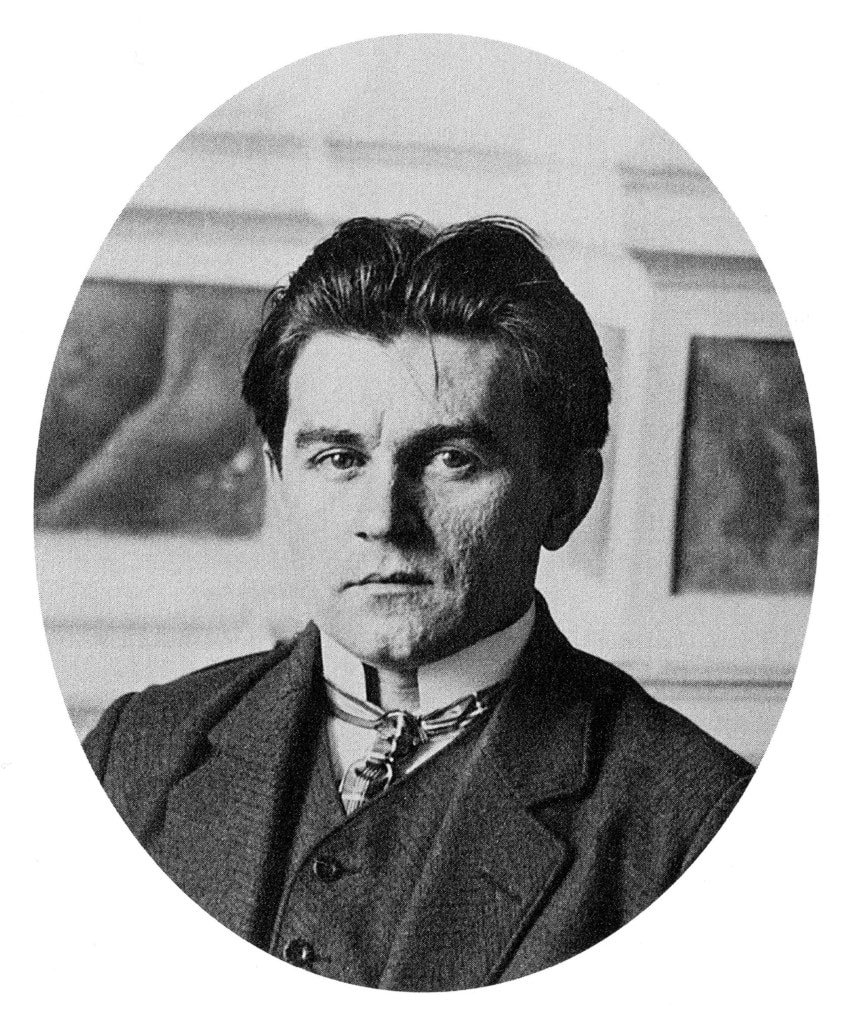 Kazimir Malevich was one of the fathers of non-objective, otherwise non-representational, Abstract art. From his writings about Suprematism, he is often quoted as writing, “When, in the year 1913, in my desperate attempt to free art from the ballast of objectivity, I took refuge in the square form”.

Below, we will provide further contextual background around Malevich and his art style called Suprematism, which was intricately tied to the formulation of his famous square painting and how he took “refuge” in this style. 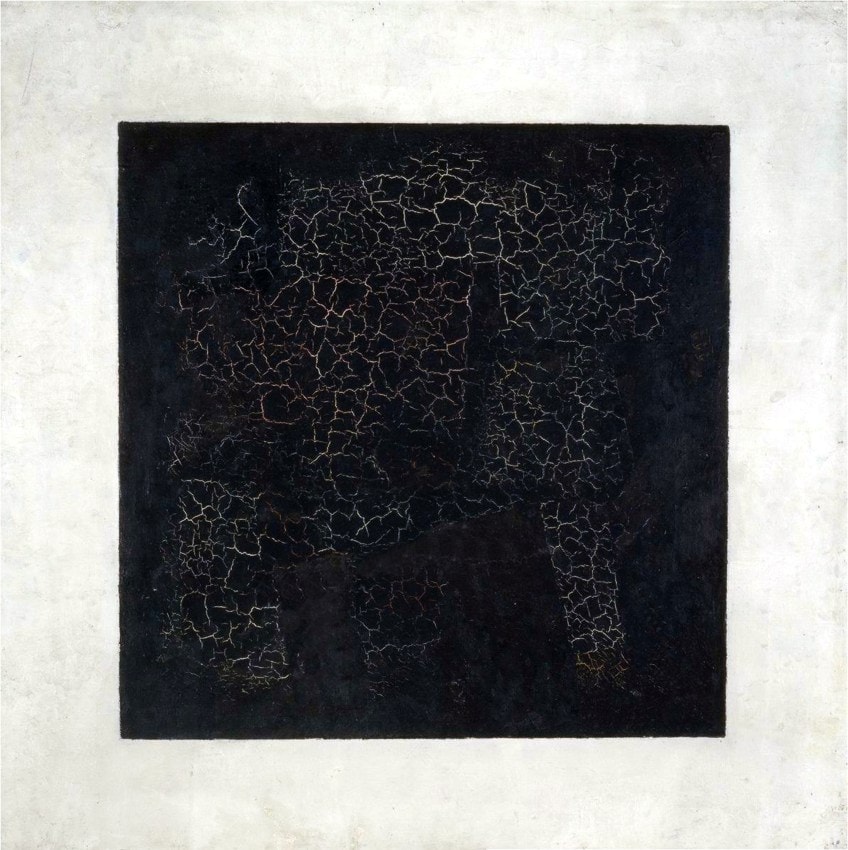 Additionally, we will explore how this Black Square painting first originated. We will then discuss a formal analysis about the Black Square painting itself, taking a closer look at the stylistic elements and the subject matter, the latter we could say is deduced from the title itself, but as we should know, nothing in art history should be overlooked even if it appears simple, and in this case, a geometric square.

The Black Square was one of the first Malevich paintings that introduced an entirely new world enriched with the expression of raw feeling. This is what the Russian artist sought to create and show the world. It was removing the heavyweights, so to say, from representational, or objective, art and becoming lighter, letting feeling fly free through the non-objective.

Kazimir Malevich first introduced his famous square painting as a design on a stage curtain for the opera called Victory Over the Sun (1913); the genre was Russian Futurism. It was in 1915 when Malevich first displayed his Black Square painting in The Last Futurist Exhibition of Paintings 0,10 exhibition in Petrograd (now Saint Petersburg), Russia. 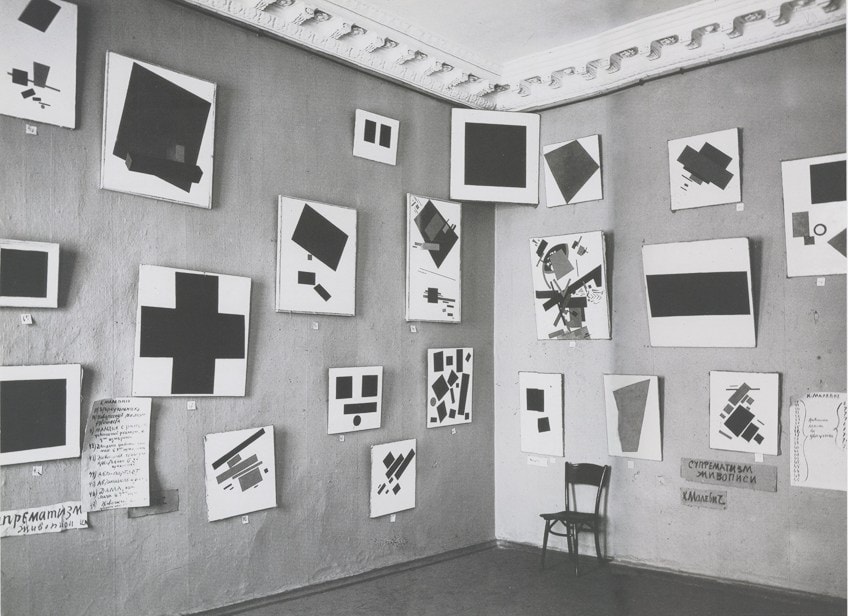 A section of Suprematist works by Kazimir Malevich exhibited for the first time at The Last Futurist Exhibition of Paintings 0,10, 1915; Unknown Unknown [1], Public domain, via Wikimedia Commons

The Last Futurist Exhibition of Paintings 0,10 showcased 39 Malevich paintings, which also introduced his new art philosophy, Suprematism, and the conclusion of what was Cubo-Futurism. There were apparently 14 artists who also exhibited at the “Zero-Ten” exhibition.

Zero: More Than an “Empty Square”

The word “zero” bears considerable weight when it comes to Suprematism and Malevich’s Black Square painting; it is the cornerstone idea infusing life into the spaces of geometric non-objectivity. But what does it all mean?

In 1915, Malevich wrote From Cubism and Futurism to Suprematism: The New Painterly Realism, which was at the “Zero-Ten” exhibition. Malevich explained in it that he transformed himself in the “zero of form” and “fished” himself out of the “slough of academic art”.

Furthermore, he explained how he destroyed the “ring of the horizon and escaped the circle of objects”. 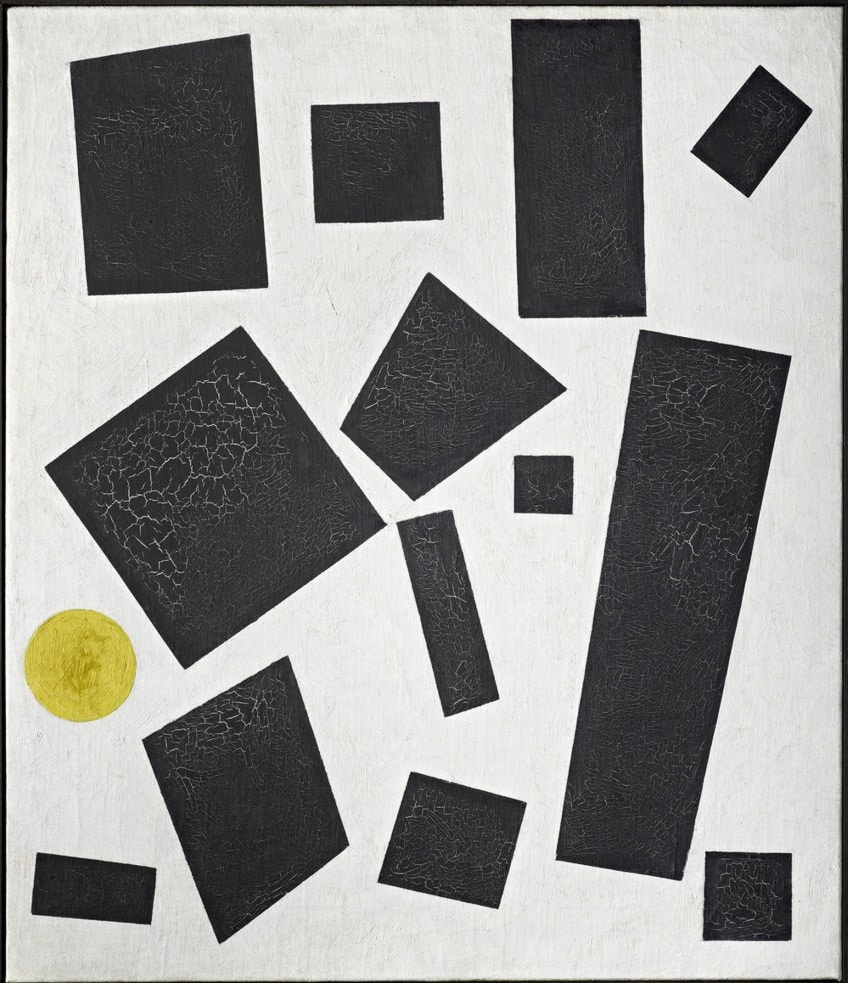 While he wrote his musings and theories in more detail than the above, the essence of Suprematism is conveyed. We can ascertain more about Suprematism from Malevich’s essay titled Suprematism from his treatise The Non-Objective World (1927).

From the above, he explained that the Suprematist square introduced the “world of feeling” and he compared it to primitive art, or “marks”, from the Aboriginal man. Their symbols stood for “not an ornament but a feeling of rhythm”. Furthermore, Malevich explained, “Suprematism did not bring into being a new world of feeling but rather, an altogether new and direct form of representation of the world of feeling”.

The public and critics were undoubtedly not used to these new depictions in art, and Malevich wrote that they proclaimed they have lost everything they love and are in a desert when they saw the black square.

Malevich described his painting as no “empty square”, but instead it was the “feeling of nonobjectivity”. These descriptions provide significant detail about the essence of the non-objective world that Malevich felt such a connection to. He explained that this desert was full of the “spirit of nonobjective sensation”.

Below, we look at the Black Square painting in more detail in terms of the subject matter, the shape, medium, color, and other stylistic elements. 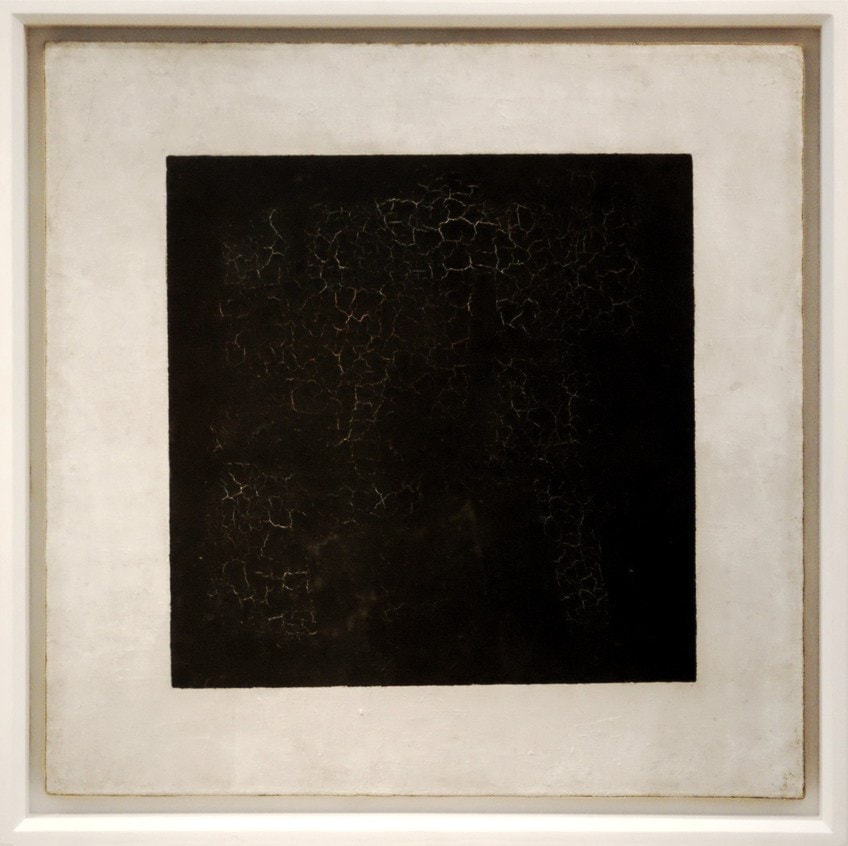 However, it is equally important to remember that Malevich sought to transcend the barriers of representation and it is possibly not referring to anything related to reality. 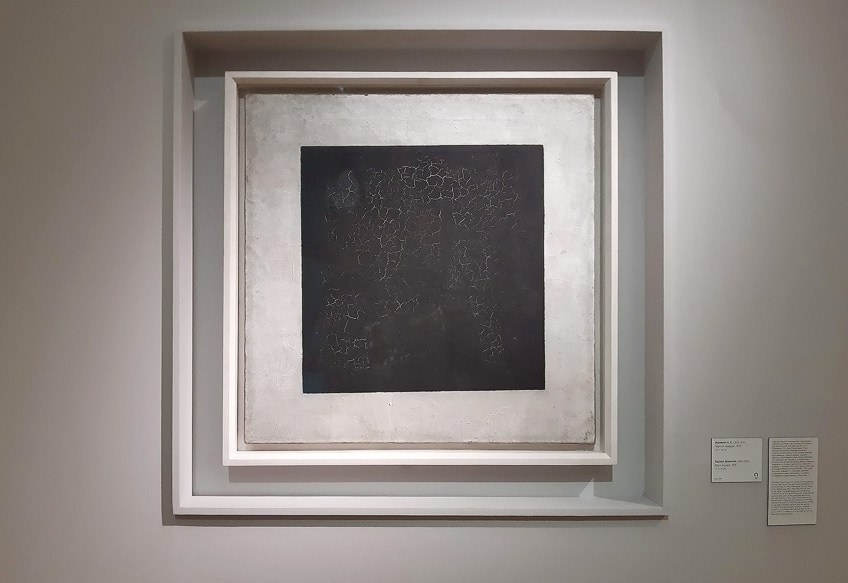 Therefore, the subject matter becomes the color, the shape, the brushstrokes, and the texture created from it, as well as the medium of paint used. When we look at all these elements that make the painting, we see what the painting is meant to be; there is no allusion to another form or subject matter created with the help of these formal elements. Malevich expounded on this in his Suprematism (1927) text, writing that the “square equals feeling, the white field equals the void beyond this feeling”.

Color and texture were important painterly parts to Malevich, in fact, to the Suprematist ideologies. In the text From Cubism and Futurism to Suprematism: The New Painterly Realism (1915) Malevich wrote about it and explained that it (color and texture) is the “of the greatest value in painterly creation”.

These are the “essence of painting”, however, he continued to state that this essence has always been “killed” by the subject of a painting.

As we mentioned above, the subject matter becomes intricately tied to the color and texture, and vice versa. An important point to note is that Black Square’s painterly surface has become considerably cracked over the years, as have some of his other paintings. This is referred to as craquelure. Sources state that this is connected to Malevich’s methods of applying paint, which was to paint over semi-wet paint. 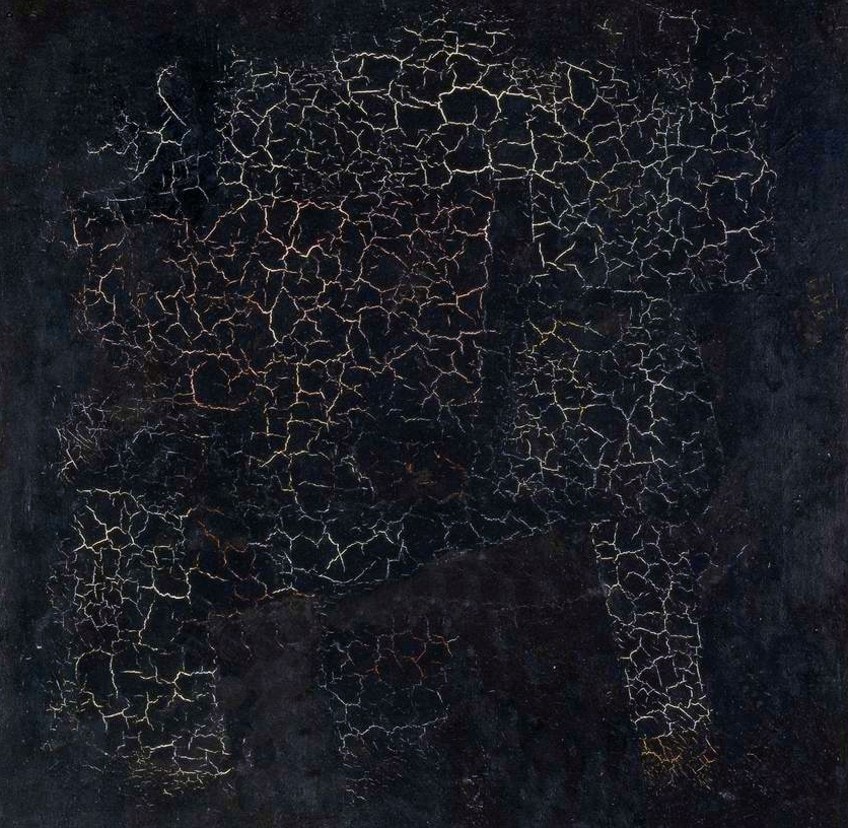 If we zoom in, we will notice texture created by the brushstrokes, on the white and black surfaces. Furthermore, art sources state that Malevich sometimes utilized two different pigments of white, namely lead white and zinc white, to create the idea of texture. Although we do not know if he utilized these same pigments for his Black Square, it is easy to understand that he may have.

We will also notice there are other colors shown through the cracks of the paint.

This points to the fact that the Black Square was, at first, not a black square. X-Ray studies of the Black Square indicated that Malevich reportedly painted two other compositions on the same canvas, which were described as “Cubo-Futurist” and “Proto-Suprematist” in style.

According to another story, Malevich needed a painting to display for the “Zero-Ten” exhibition, so he painted over an image he already started. Although this story might deem to be true, it is true that there are images under the Black Square painting, however, maybe Malevich’s true reasons for his pivot in the subject matter will remain unclear to an extent.

It was in the form that Malevich saw true art and he even compared how a hexagon or pentagon would have made better sculptures than Venus de Milo (c. 150 to 125 BC) or the David (1501 to 1504). From the same text mentioned above, Malevich wrote that art needs to be created with the intention to repeat the “real forms of nature”. We certainly see this in the form and shape of the Kazimir Malevich Black Square as well as so many of his other Suprematist artworks.

If we look at the form of the square, art sources have stated that it is not a true square, in other words, the sides are not paralleled like a square would be. 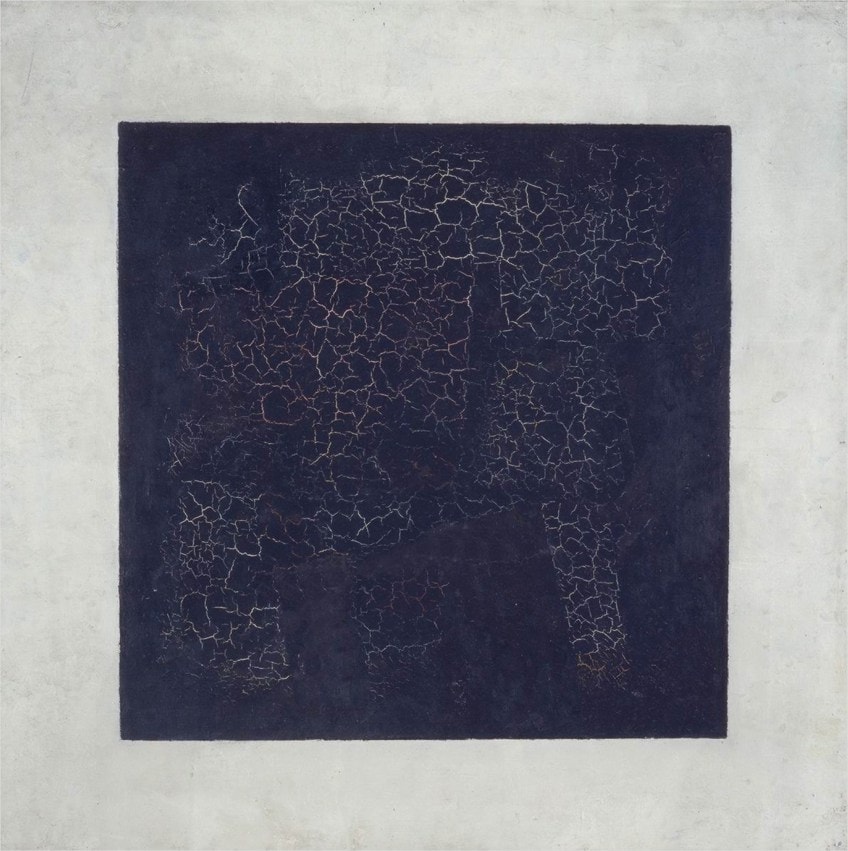 X-Ray studies also revealed that Malevich wrote a note under the Black Square’s paint. It read, “A battle of negroes…”, the rest of the inscription was reportedly illegible, but some artistic resources have stated it possibly read, “Battle of negroes in a dark cave” or “Negroes battling in a cave”.

This has been traced back to Alphonse Allais, who was a French writer. The artwork was titled, in French, Combat de nègres dans une cave, pendant la nuit, which means “Battle of negroes in a cave at night” (1897). This was reportedly made as a joke and inspired by the original version made by Paul Bilhaud in 1882, titled in French as Combat de négres dans un tunnel.

What Malevich meant when he wrote “venture to spit” was to passionately motivate artists to leave behind the outdated, referring to Futurism, and embrace the new, which was Suprematism. The Kazimir Malevich “Black Square” became an emblem, or symbol, of Suprematism. It was a black flag, so to say, welcoming in the future, and leaving behind Futurism.

Take a look at our Black Square painting webstory here!

Who Painted the Famous Square Painting?

Kazimir Malevich painted the famous Black Square in 1915. He was born in Ukraine and became known as one of the forefathers of abstract art, specifically geometric abstract art or non-objective art.

Where Is the Kazimir Malevich Black Square (1915) Now?

The Black Square (1915) painting is housed at the State Tretyakov Gallery in Moscow, Russia. The art gallery has an extensive collection of Russian art dating back to the 12th century, including Modern art pieces.

What Art Style Is the Black Square (1915) Painting?

Kazimir Malevich painted the Black Square (1915) as a leading example that introduced his art theory and style called Suprematism. It was a form of non-representational art that went back to the so-called world of feeling. 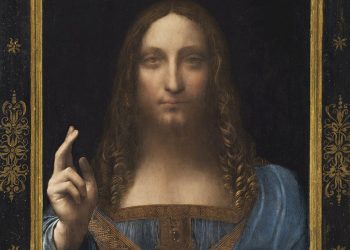 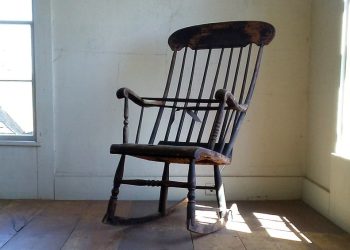 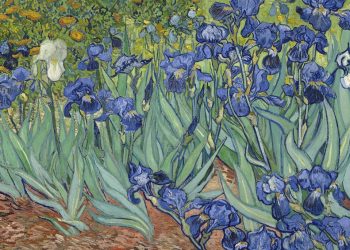