MostVenus of Urbino analyses fall into two camps; both concur that it has a strong sensual charge, but apart from that, it is viewed as either a portrait of a prostitute, maybe Zaffetta, or as a painting commemorating the marriage of its initial owner – who, claimed by many, did not commission it.

This topic is part of a wider debate regarding the relevance of the reclined nude female style, which Titian developed or helped create with Giorgione’s “Dresden Venus” of around 1510. 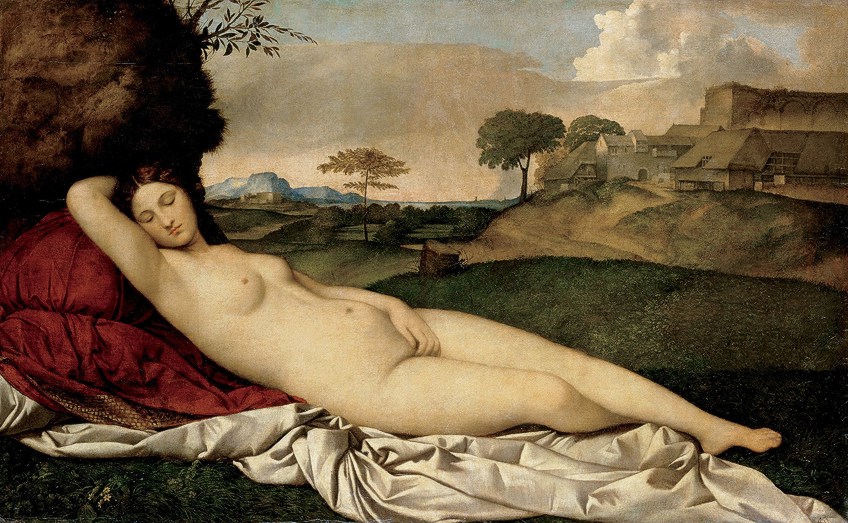 “It has yet to be demonstrated that the most renowned representative of this type, Titian’s Venus of Urbino, is anything less than a picture of a lovely naked lady on a bed, devoid of traditional or even metaphorical substance,” writes Charles Hope. Even Edgar Wind, a relentless researcher of metaphor rooted in Renaissance Neoplatonism, had to admit that in this instance, “an overt eroticism had finally demolished the Platonic comparisons.”

The Artist Behind the Venus of Urbino Painting: Titian

Titian was a well-known Renaissance artist who merged High Renaissance and Mannerism elements to produce a far-ahead-of-its-time technique. He occupied Venetian art with a level of inventiveness that permitted the city to compete with the preexisting artistic centers of Rome and Florence, and he produced portraits of some of the most essential and prominent personas of the period, including, Pope Paul III, Charles V, Philip II of Spain, and Henry III of France. In addition to portraiture, he produced a wide range of theological and mythological subjects, typically on a large scale.

Throughout his long and productive career, his work evolved from typical Renaissance iconography to increasingly frenetic paintings that abandoned harmonious compositions in favor of asymmetry and dynamic topics. As he approached the end of his life, his works became darker and more impressionistic.

A close-up of a self-portrait by Titian, c. 1562; Titian, Public domain, via Wikimedia Commons

He had a tremendous effect on his peers, and his works may be viewed as early pioneers of the violent struggle of Baroque art, as well as influencing succeeding creatives. Titian was well recognized for his dramatic use of color, particularly in his initial studies, which he did by seeking out rare colors and using them in their purest and most extreme form, as well as precisely harmonizing each color with those around it to make a cohesive overall image. He also concentrated on the effect of light on color, using lighting techniques such as chiaroscuro to accentuate contrasting colors.

Through this concentration, he established a separation between Florentine and Venetian art.

Whereas Renaissance artists in Florence and Rome stressed line, Titian led the Venetian Renaissance method, which was marked by color. Later work by the painter is distinguished by free brushwork and an emotive use of paint, and it is conceivable that he employed his fingertips in addition to brushes to disperse and blend paint at occasions.

Titian’s method of painting developed a fluidity that added a feeling of movement and passion to his artwork and set him apart from his contemporaries. Titian worked nearly entirely with oils, which was a novel medium at the time. The material allowed him to layer a sequence of glazes to capture the visual effect of the human figure with new precision, delicacy, and softness. This realism was most visible in his portrayals of feminine nakedness, which were unusually sexually graphic for the period and appear to reflect Titian’s inner desires. 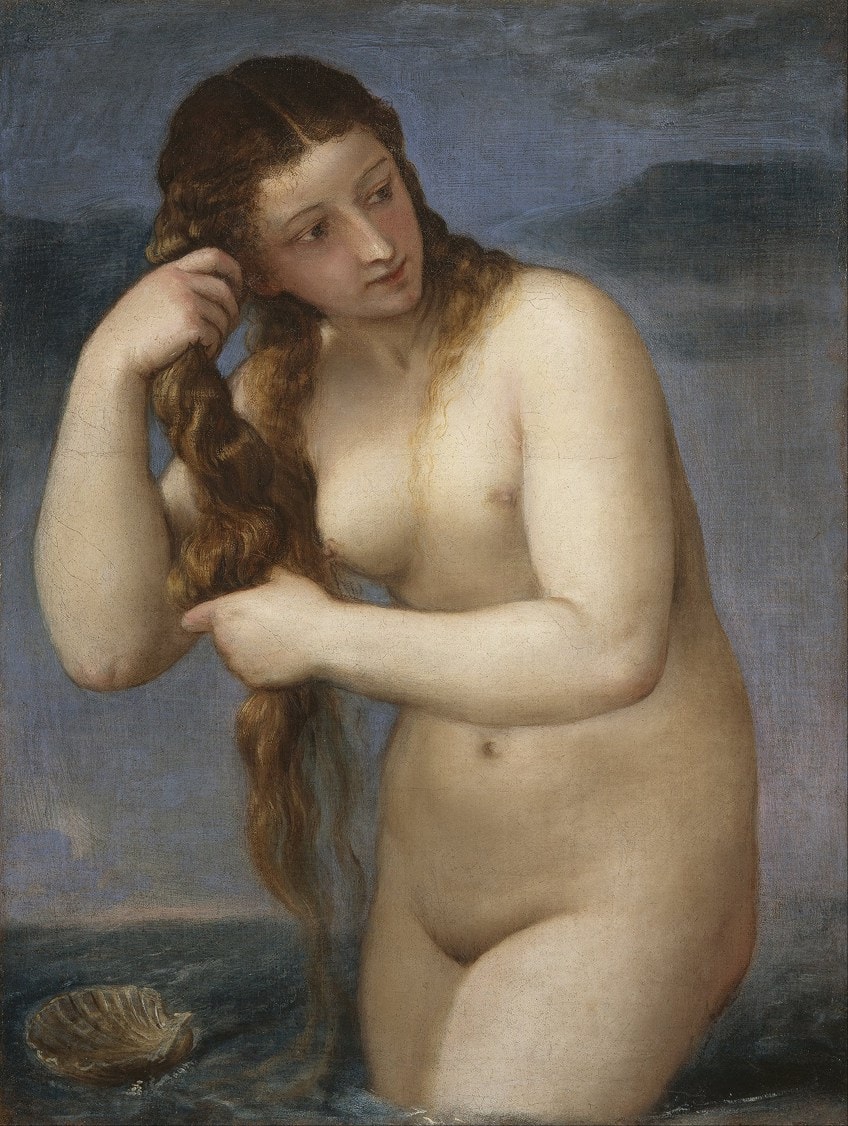 Titian’s Mannerism style influenced a multitude of his colleagues, notably those who worked in his workshop, such as Bonifazio Veronese, Paris Bordone, and Polidoro da Lanciano, as well as his nephew Marco Vecellio. It has also been reported that in his later years, he worked with El Greco, who influenced his notably brilliant use of color. Titian was dubbed “the sun amidst little stars not just among the Italians but among all the painters of the globe” by art historian Giovanni Lomazzo in 1590, and masters such as Rembrandt, Rubens, and Tintoretto owe a tribute to Titian in respect of design, color, and use of loose brushstrokes.

This effect lasted far into the seventeenth century, with Marco Boschini commenting over a century after Titian’s death in 1674 that “Titian genuinely was the most wonderful of those who decorated: because his brushes constantly gave birth to manifestations of life.”

A Venus of Urbino Analysis

Venus looks straight at the observer, unconcerned about her nakedness. She has a posy of flowers in her right hand and her other hand is over her genitals. A dog, which is commonly used as a symbol of faithfulness, may be seen in the background. Two maids are depicted in the backdrop searching through a cassone trunk, where garments were stored.

Titian’s representation of the internal environment is remarkable, if not unique. 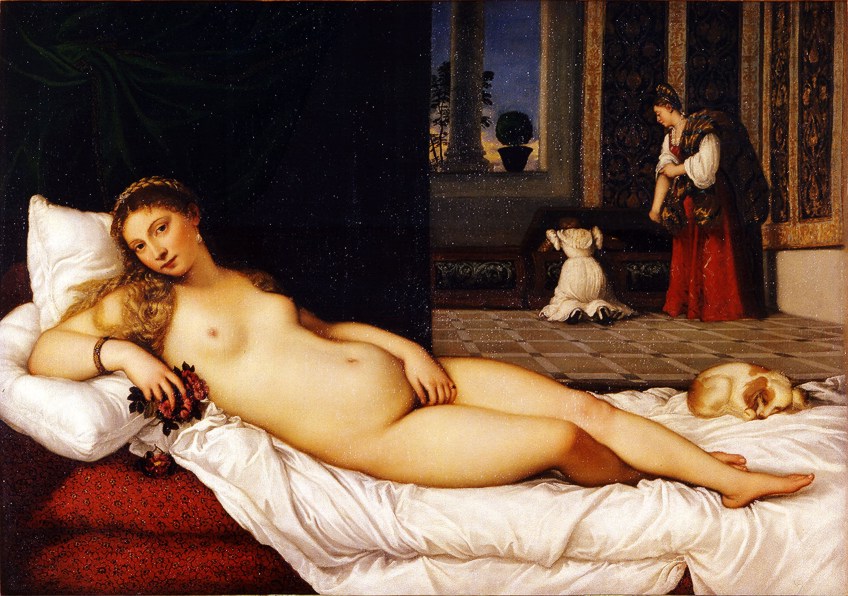 Titian was hired by Pope Clement VII to paint the 21-year-old Ippolito de’ Medici, who was grudgingly named a cardinal (but not a priest) by his uncle. He was a papal ambassador who was attempting to pursue a military career. On the 20th of October, 1532, he stayed the evening in Venice with Angela del Moro, also known as Angela Zaffetta, a renowned prostitute in Venice who was occasionally a dinner companion of Aretino and Titian, the latter of whom was a friend of the cardinal. Titian painted Ippolito’s picture, and it is probable that he was ordered to include a nude painting of Angela Zaffetta, or that Titian produced one in the hope that he would appreciate it. Titian had written to Ippolito’s secretary in Rome on the 20th of December, 1534, stating that he had been engaged in a picture of a female for the cardinal.

Ippolito passed away in August 1535 and presumably never saw the picture, which was still in Titian’s workshop when Guidobaldo II della Rovere came to pose for a painting in January 1538.

As correspondence from him and his mother demonstrate, Rovere was eager to purchase it and did so many months later; he alludes to it simply as “the naked woman,” and was concerned Titian might sell it to somebody else. Later that year, upon his father’s death, he received the Duchy of Urbino, which is an area ruled over by a Duke, giving rise to the painting’s common name, but it appears that it was largely kept in Pesaro from the start. A map of Duchy of Urbino, 1608; Abraham Ortelius, Public domain, via Wikimedia Commons

Instead, the picture might have been ordered by Guidobaldo, perhaps to commemorate his wedding in 1534 to Giulia Varano, which elevated him to Duke of Camerino. Some commentators have seen marriage allusions in elements such as the attendants at the cassone, where the garments traditionally provided to the bride by her husband’s family were housed.

Even the tiny dog on the mattress has been introduced into the debate. In fact, an identical dog is depicted in Titian’s painting of the duke’s mother Eleonora Gonzaga, with the rationalization being that the dog helps to identify the house as a della Rovere home, and the fact that it remains silent suggests that the observer is the woman’s husband.

According to Józef Grabski’s latest interpretation, the picture is a metaphor of marital love between Fernando d’valos and Italian poet Vittoria Colonna. Grabski backs up his theory with visual evidence and symbols, the most notable of which is the traditional pillar in front of the trees in the opening on the right side, a little element in the picture that mimics the Colonna Family shield of arms.

The della Rovere dynasty moved to Pesaro, where the painting was exhibited at the Villa Imperiale, while the Papacy proceeded to entirely transfer the duchy to the Papal States in 1624. When Vittoria della Rovere married Ferdinando II de’ Medici, it was added to the Medici family library in 1633.

It was relocated to the Uffizi in 1736 and has stayed there ever since, with the exception of trips to exhibits in Brussels, Madrid, Tokyo, Venice, and Urbino in the 21st century. 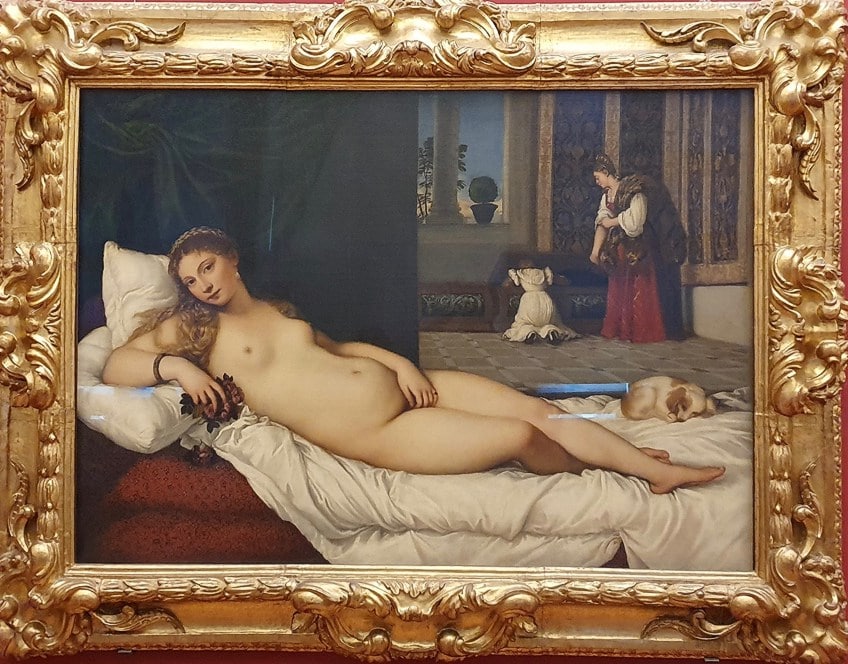 Mark Twain described the Venus of Urbino as “the filthiest, nastiest, most obscene image the earth possesses” in his 1880 travelog “A Tramp Abroad”. He speculated that “it was created for a brothel, and it was probably declined because it was a touch too powerful,” adding wryly that “in reality, it is a touch too intense for any venue save a public art gallery.”

Twain does this to contrast the creative liberty (for instance, nudity) permitted in painting with the constraints and Victorian morality put on literature in the “past eighty or ninety years.” Twain similarly ridicules the fig leaves put on nude sculptures in Rome in the nineteenth century, which had “stood in naive nakedness for millennia” in the same paragraph.

Take a look at our Venus of Urbino webstory here!

Who Created the Famous Renaissance Woman Painting, the Venus of Urbino?

Titian was a well-known artist of the Renaissance period who combined High Renaissance and Mannerism concepts to create a style that was far ahead of its time. He engaged Venetian painting with a degree of ingenuity that allowed the city to compete with the pre-existing creative centers of Rome and Florence, and he created portraits of some of the period’s most important and influential figures. He had a large effect on his contemporaries, and his paintings may be considered as early forerunners of the fierce struggle of Baroque art, as well as influencing succeeding creatives.

What Is the Venus of Urbino Meaning?

Some observers have identified marriage allusions in aspects such as the attendants at the cassone, which traditionally stored the clothing handed to the bride by her husband’s family. According to Rona Goffen, Venus’s hand “caressing” her vaginal area is such an allusion since it was once thought that a female “emission” or orgasm was necessary for pregnancy to occur, and female masturbation was therefore permitted only when the male had ejaculated and fled. The creation of heirs was a primary concern in elite marriages. According to Józef Grabski’s current interpretation, the image is a metaphor for Fernando d’valos and Italian poet Vittoria Colonna’s married love. Grabski supports his argument with visual evidence and symbols, the most prominent of which is the classic pillar in front of the trees in the aperture on the right side, a little piece on the painting that resembles the Colonna Family shield of arms.