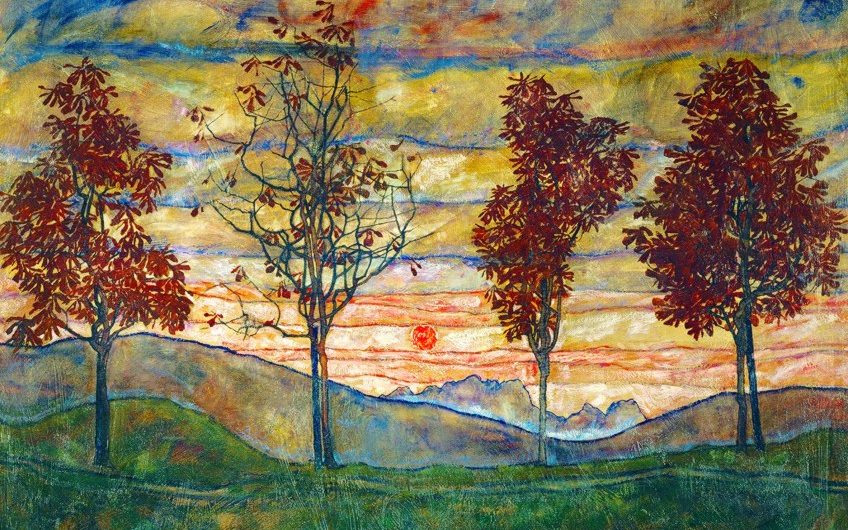 Artists have always loved to depict nature – from cave art to landscape paintings – so it is no wonder that there is no shortage of tree art and forest paintings. Most famous tree painters are artists who have already established themselves in various other genres and movements, and trees are just another topic they chose to depict. Let us have a closer look at the famous tree paintings created by these masters, and how tree art has stretched its branches into the various art styles through the centuries.

Discovering the Most Famous Tree Paintings

Forest paintings and other tree artworks often depict the various changes of seasons, enabling artists to produce a variety of color palettes – from the browns and golds of the fallen leaves of autumn to the burst of beautiful floral colors in spring.

Many artists have chosen to paint outdoors, allowing them to capture the colors of nature accurately, and enjoy the relaxing and refreshing fresh air.

These famous tree painters are highly regarded in the world of landscape art and have produced some of the finest and most famous tree paintings in the history of art. Once you have explored this list, you will most likely have your own favorite famous painting with trees.

A grove of trees represented initiation ceremonies and concealment in ancient times. They were thought to be sacred and untouchable. However, the trees in this famous tree artwork appear to have been deserted with most of their branches severed.

The artwork portrays a natural Romantic landscape – a scene from a winter day near Gutzkow, Germany.

In the center of the image, three stones are piled on top of each other. The biggest stone stands on top of the two smaller ones, implying the concealment of a burial site. 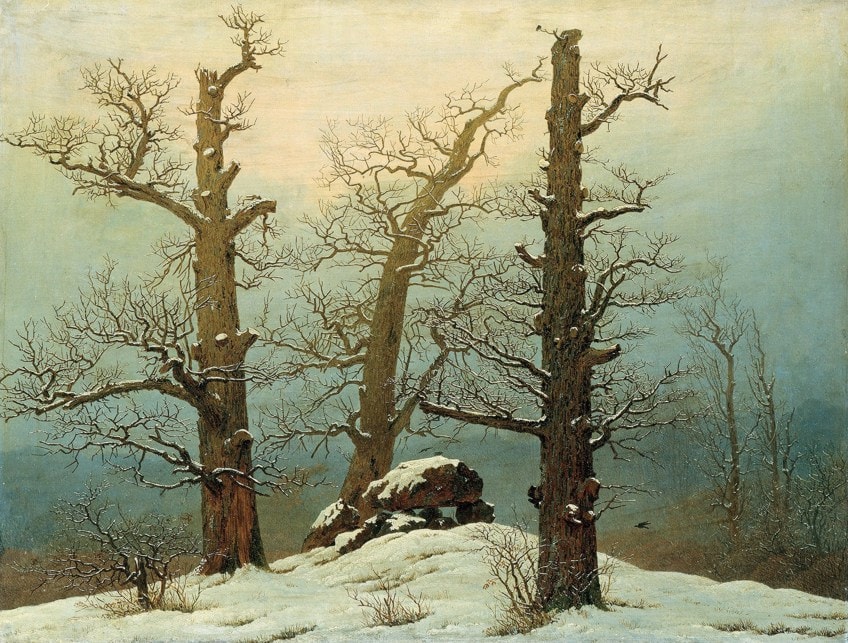 The Hay Wain was favorably appreciated upon its debut in Europe, helping to raise the artist’s fame throughout the continent. British art had long been overshadowed by painters from Italy and France and now was the moment for British artists to acquire attention for their works. It was a big honor for this Suffolk-born artist to have the artwork lauded by Théodore Géricault, one of the most accomplished representatives of the French Romanticists.

It was created solely in oils, while other mediums may have been employed in the preparatory stages, such as study sketches and early layout design on the canvas itself. 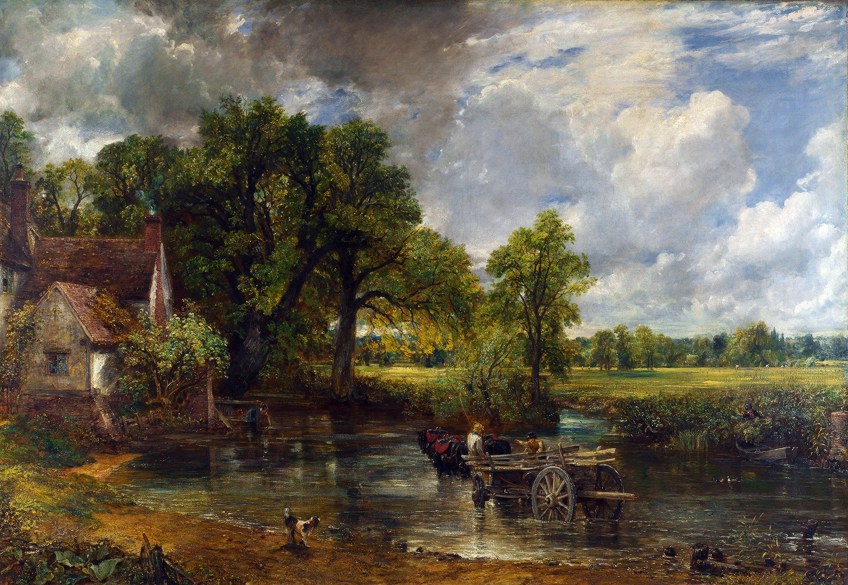 Forest in Autumn (1841) by Gustave Courbet

As an innovator and a painter eager to make outspoken social remarks through his work, Courbet has a significant position in the history of 19th-century French art. He was renowned for using an innovative technique to paint settings and topics in great detail with sharp distinctions between light and dark. The vibrant European forest in the fall is portrayed in one of his most famous tree paintings.

In this piece, the artist has depicted a forest with towering trees and vibrant hues in the canopy, creating an atmosphere that is incredibly beautiful and tranquil. 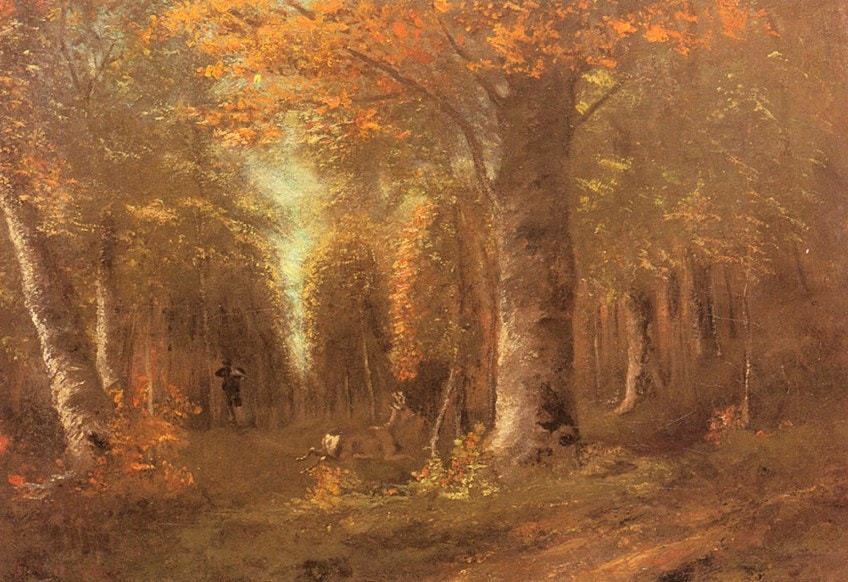 Few Impressionist artists had a more enduring influence than Pierre-Auguste Renoir. He was regarded as one of the most talented French painters of the 19th century, renowned for his extraordinary ability to create paintings that were realistic and that emphasized the sensuous appeal of his themes. Renoir was always mixing among the Parisian socialites, and he would congregate with many other young creative people and privileged youths in some of the renowned locations around the Seine River or in some of the surrounding woodlands.

This famous painting with trees illustrates one such gathering in a typical Impressionist style, with the iconic Camembert sites depicted. 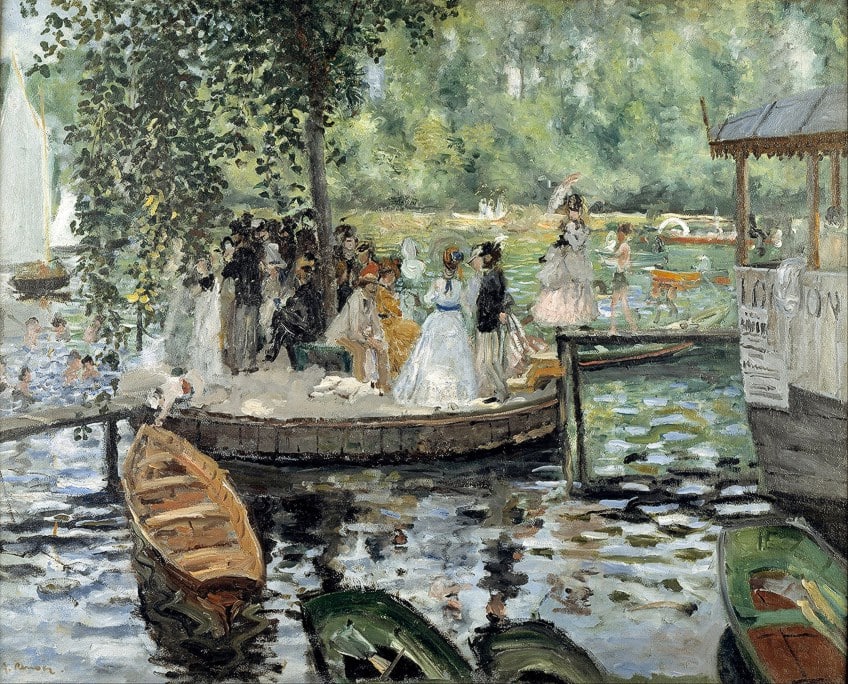 The Artist’s Family in the Garden (1875) by Claude Monet

Monet co-founded the Impressionist style during his four years at Argenteuil, during a time of frenzied artistic activity in the little town. Throughout this time, he honed his signature style by painting immersive recreations of the shifting effects of sunlight on the untamed greenery. The themes and objects are practically superfluous in Monet’s colorful representation of this beautiful landscape – the essential subject of space, light, and the natural world.

While it is now typical to see easel-balancing enthusiasts in the countryside, Monet’s outdoor creative practice sparked an artistic revolution. 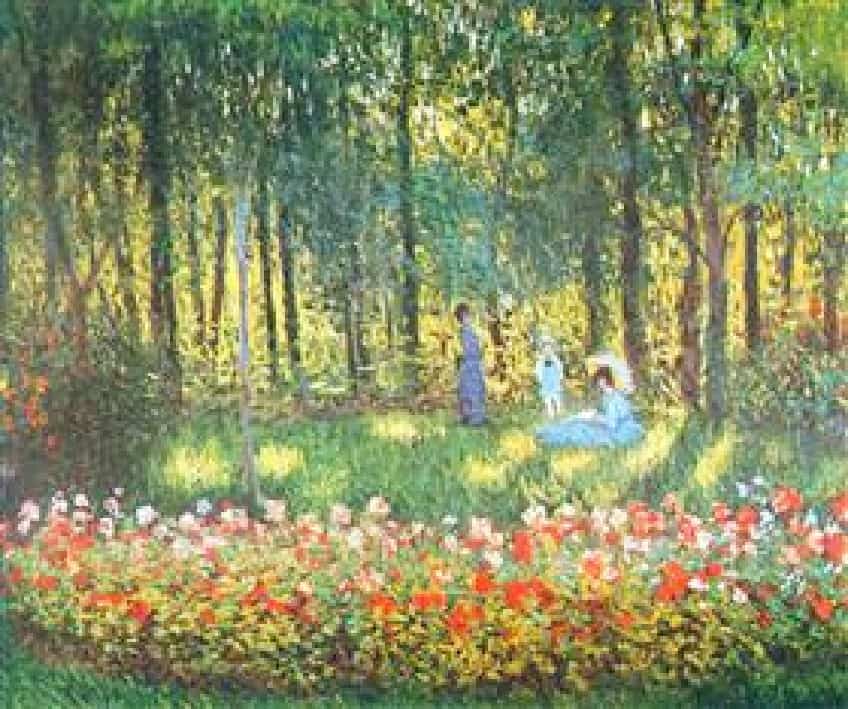 The Artist’s Family in the Garden (1875) by Claude Monet; Claude Monet, Public domain, via Wikimedia Commons

Van Gogh painted this famous painting with trees not to rekindle his own hope but rather as a gift for his loyal brother. Theo wedded Jo Bonger in the spring of 1889, and she delivered their first child in February 1890. They called him Vincent in honor of the boy’s godfather. Van Gogh gave the baby who would bear his name this tree artwork as a gift. Never before had he produced the vivid buds up close; he had never before showered the magnificent blooms with such color.

The artwork’s optimistic statement is linked with concepts about the future and human life. The main theme of the artwork is desire rather than being completely utopian in nature. 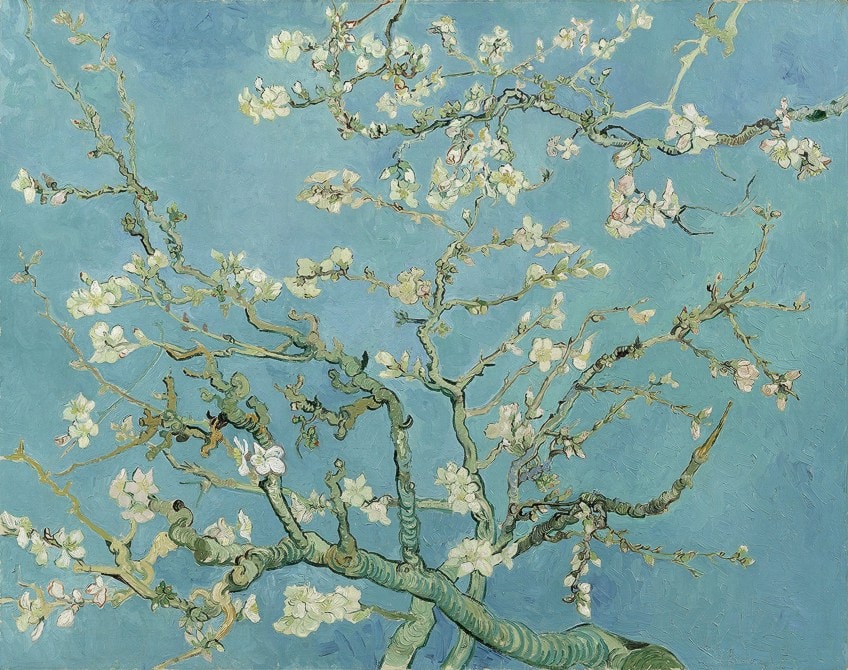 This piece, which is produced in her Neo-Primitive style, mixes the influence of Matisse’s artworks, as well as the folk iconography and aesthetic of lubki, famous woodcuts that included scenes drawn from Russian life and mythology. Goncharova makes the 2D figures colossal by giving them a more sculptural quality, and she places them within Russian cultural heritage by arranging them in a way that is reminiscent of both folk and church iconography.

This famous painting with trees is a part of her series of paintings illustrating the grape harvest and features two ladies and two men doing a circle dance on green soil with a deep blue sky behind them.

While Klimt’s initial landscapes were produced in the early 1880s, it wasn’t until the late 1890s that he returned to landscape themes on a regular basis, during summer breaks spent in the gorgeous Salzkammergut region just outside of Salzburg. Forest paintings allowed him to experiment without the pressures of contracted work or the diversions of the city.

After the early 1900s, when Klimt shunned huge governmental contracts in favor of selling his works, having a ready supply of fresh landscapes was helpful. 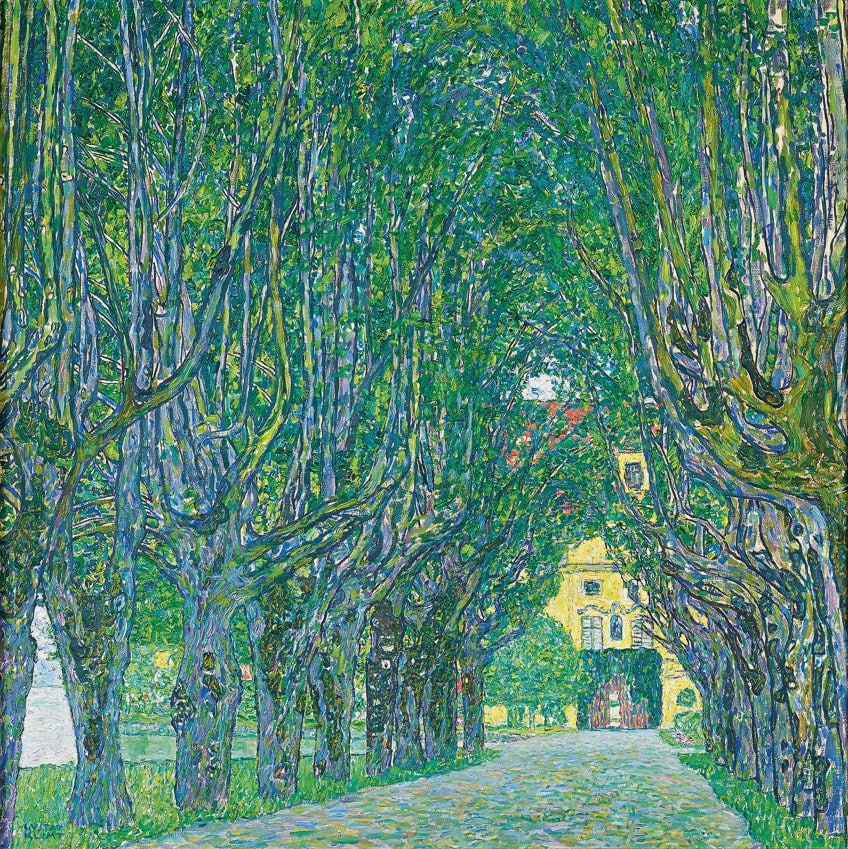 The contrasted lighting helps to bring focus to the mountains and brilliant sun in the backdrop, giving this painting a lot of depth. Some think that the trees on the artwork’s borders are healthier to represent the artist’s idea that individuals who take a more creative path in their lives would be better off compared to those who take a more conservative path.

The contrast between light and dark in this artwork has made it famous among Egon Schiele enthusiasts, and it has since become one of the most reprinted works from his brief but fruitful career. 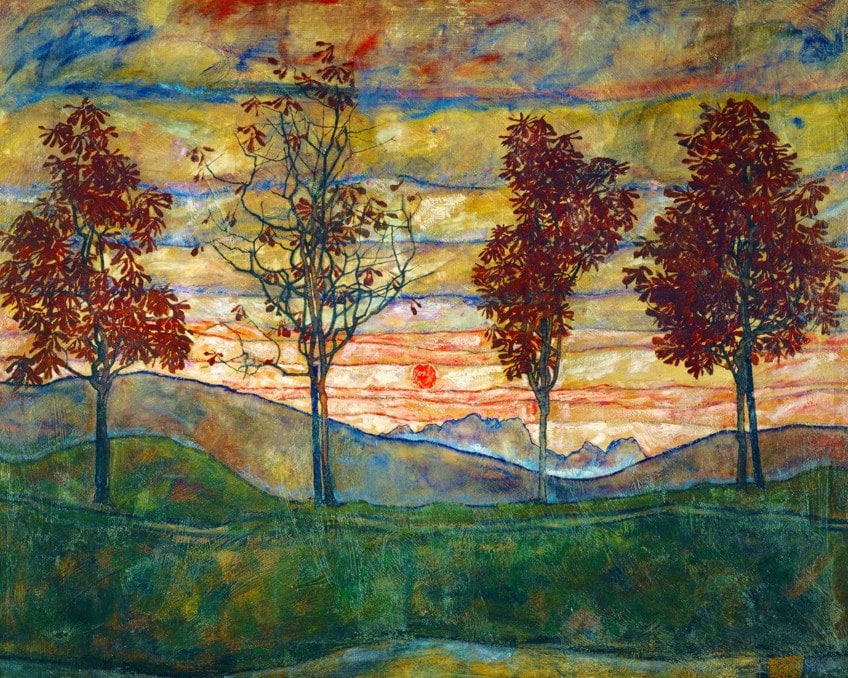 Elaine de Kooning was a well-known American painter who specialized in portraiture. Her vibrant figurative paintings contributed significantly to the age of Abstract Expressionism. De Kooning frequently depicted friends and important individuals throughout her career. The artist worked in a manner inspired by prehistoric cave paintings during the next few decades.

However, in this painting, De Kooning focused her artistic attention on depicting trees.

That concludes our list of famous tree painters and their famous tree paintings. As we have observed, famous tree artworks are as abundant in art as trees are in nature. Every famous painting with trees on this list is unique and produced in a different style. Forest paintings are a popular topic, no matter which movement you are a part of.

What Do Trees Symbolize in Tree Art?

Many artists utilize trees in their works, not only for their innate beauty but also for their symbolic significance. Trees represent the resilience of nature. They symbolize a close connection to nature, and a grand majesty worth being revered and honored.

Why Do Artists Create Famous Paintings With Trees?

Many artists are nature lovers at heart. Many movements also encourage painting outside. Therefore, it is no real surprise that they would want to portray the natural beauty and strength of the surrounding trees.