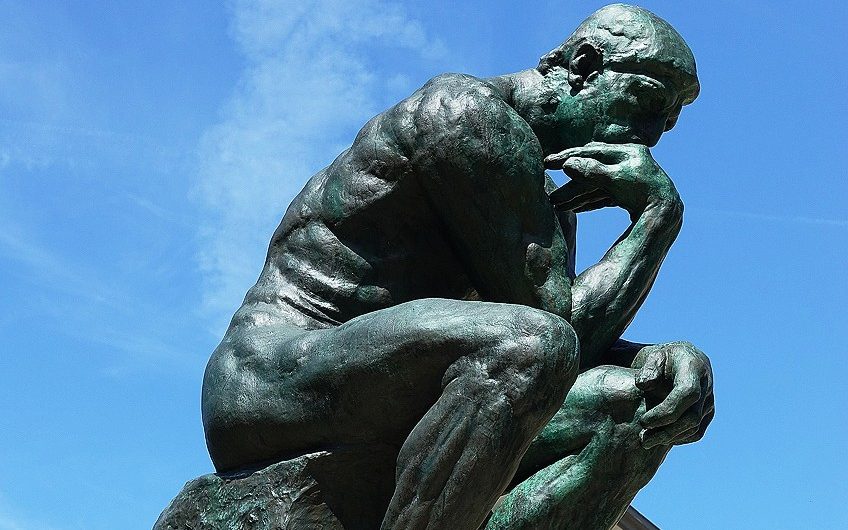 The Thinker Statue by Auguste Rodin

First off, where is The Thinker statue and who sculpted The Thinker? One of Auguste Rodin’s most well-known creations depicts a contemplative nude male. Many marble and bronze copies in various sizes were created during and after Rodin’s lifetime, but the most renowned version is the 1.8-meter bronze sculpture in the Rodin Museum’s gardens, produced in 1904.

In his moment of deep introspection, the enormous muscular physique has fascinated spectators for years.

A Brief Look at Auguste Rodin

Rodin’s narrative encapsulates the quintessential contemporary artist’s struggle. He was born into obscurity and was ignored by the formal academies despite his early potential. He worked as an ornamental sculptor for years before achieving international prominence as a result of success and scandal. He was compared to Michelangelo by the time he died.

His status as the founder of modern sculpture has not changed, and his standing as a draughtsman has risen in recent years as a result of the broader presentation of his many drawings.

His very personal – some say predatory – drawings of his models, on the other hand, have changed the character of the conventional reverence afforded to this distinguished artist. Rodin removed many of the narrative connections to the ancient myths that were still present in academic sculpture in the late nineteenth century, emphasizing the dignity of ordinary human situations. Such portrayals have become paragons of fine art because of Rodin’s popularity, yet their value and freshness were not recognized until his time. 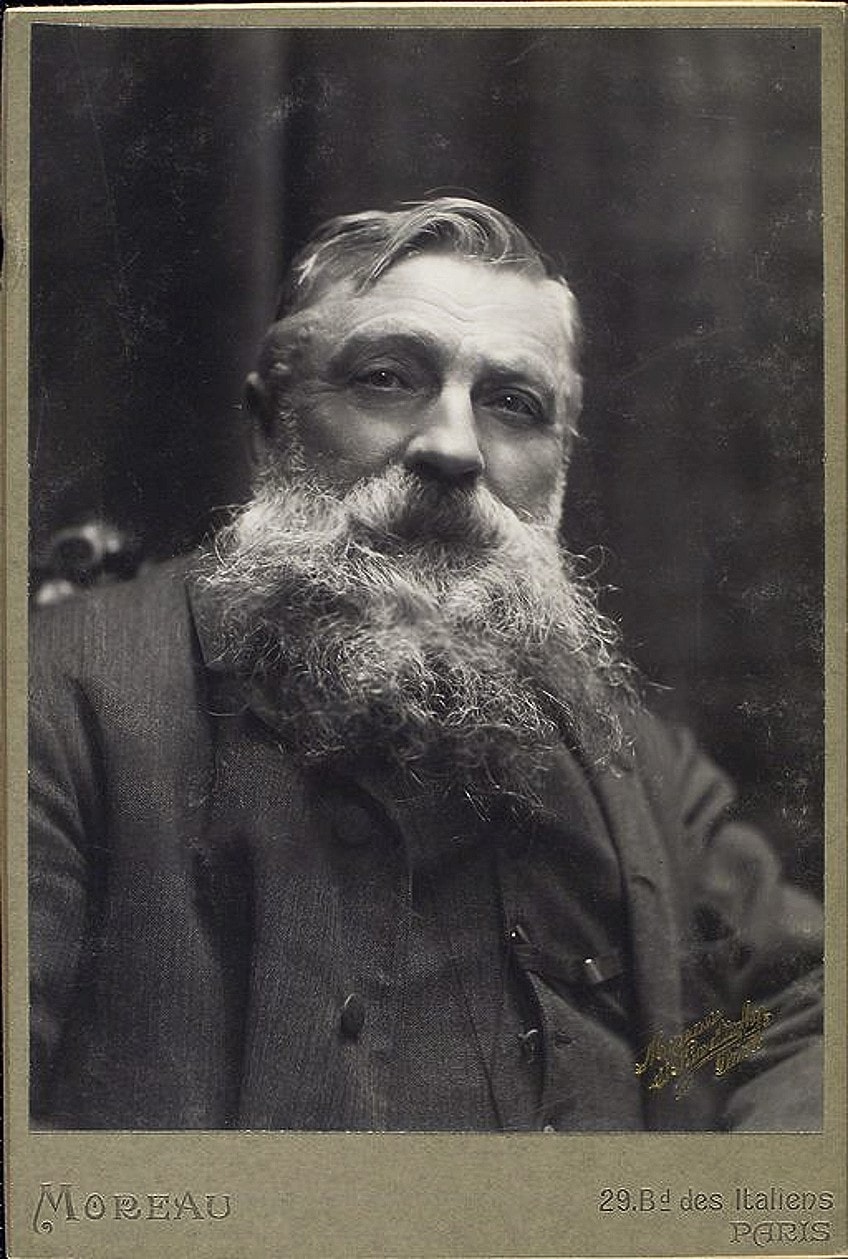 He created lifelike beings in decidedly modern attitudes of love, thinking, and proud physique, rather than gods or muses. Rodin’s success as a sculptor was to discover a means to represent the transitory mobility of the contemporary human via the brutal materiality of sculpture.

To accomplish this, he abandoned academic sculpture’s polished and idealized forms in favor of rougher, more unpolished surfaces that better-portrayed agitation, corporeality, and movement. While this frequently connotes psychological disturbance, it also connotes the continual mobility that characterizes modern life.

Rodin’s creative process frequently inspired him to repurpose works in new ways. Figures in his The Gates of Hell, for example, were frequently reproduced at a later period, individually and at different scales. Rodin, on the other hand, would portray the same form in many sculptures or fragment people into specific body parts such as hands and arms. All of these techniques were aided by his unconventional approach to composing, which resulted in bizarre and startling results.

The Thinker was intended as part of The Gates of Hell, which began as a commission for a set of bronze doors for a projected museum of ornamental arts in Paris. Rodin created a series of miniature clay figurines to symbolize the poem’s tortured protagonists.

The museum, on the other hand, was never built, and Rodin’s Gates were never cast during his lifetime. The original plaster on display at the Musée d’Orsay, as well as the posthumous doors, give some indication of his concept. 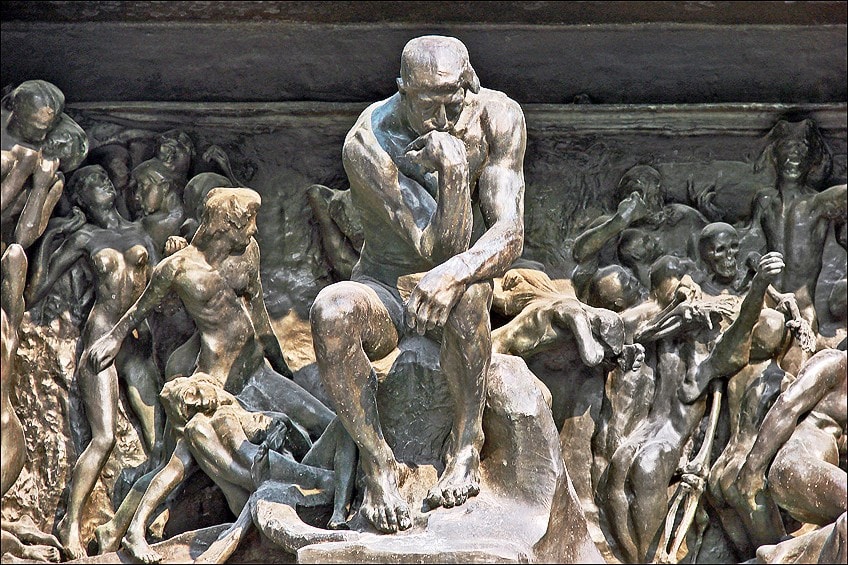 The Gates of Hell behind The Thinker by Auguste Rodin; Jean-Pierre Dalbéra from Paris, France, CC BY 2.0, via Wikimedia Commons

A 70-centimeter poet emerges on the pediments above the doors in these cases. The naked figure sits on a rock, his back bent, brows strained, chin laying on his relaxed hand, and lips pressed into his knuckles. He sees the writhing shapes of those suffering in the rings of Hell below, still and pensive.

Some historians believe the Poet was supposed to portray Dante, although the sculpture’s strong and hefty body contrasts with traditional depictions of the poet, who is slim and agile. Others argue that the figure appears naked throughout the poem, but Dante is fully clothed, and that the statue’s body is unrelated to Dante’s effete shape.

Rodin continued to alter several of the characters from The Gates after the intended museum fell through, utilizing some in new ways and presenting others separately. In 1888, he dubbed it The Thinker and showed it alone, until enlarging it to a bronze version in the early 1900s. Rodin’s studio workers, particularly Henri Lebossé, worked on enlargements of his original clay sculptures at his workshops. 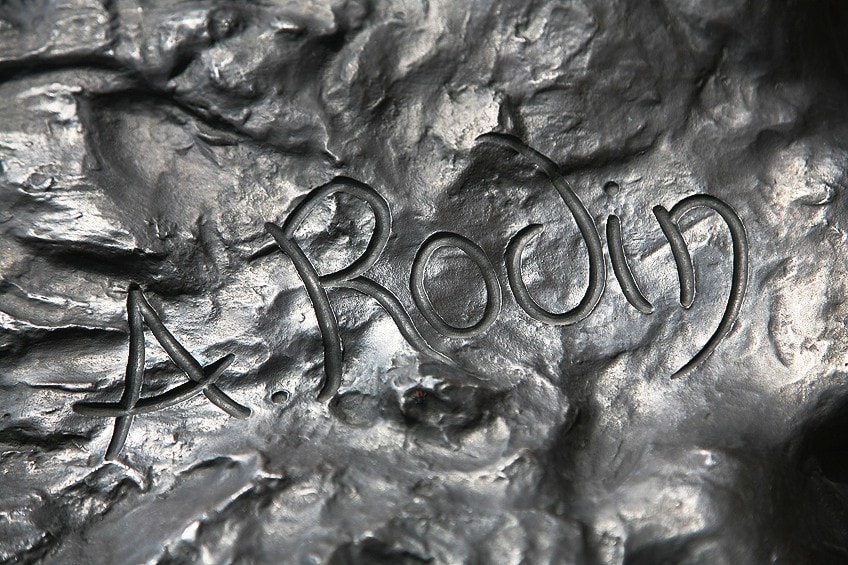 They employed a Collas machine, which was founded on a pantograph system and looked like a lathe, to manufacture varied-sized replicas. The massive Thinker emphasized Rodin’s preference for unfinished surfaces—the sculpture’s close-cropped hair, in particular, displays Rodin’s rough sculpting of the clay figure with its folds and indentations.

Rodin exhibited the sculpture at the Salon de Paris in 1904, where “The Thinker’s” larger-than-life grandeur and separation from “The Gates” drew more attention than his smaller companion.

In 1922, it was relocated to the Rodin Museum’s grounds. Rodin supported widespread circulation of his work by approving several marble and bronze reproductions during his lifetime and permitting the Rodin Museum to produce posthumous editions.

The Thinker has been cast in numerous variants and can be seen all over the world, but the history of the model to casting transition is still a mystery. There are about 28 massive bronze castings in museums and public spaces. There are other sculptures in various study scales, as well as plaster replicas (typically plated bronze) in both monumental and study scales.

Some posthumous casts have been made and are not regarded to be part of the original production. 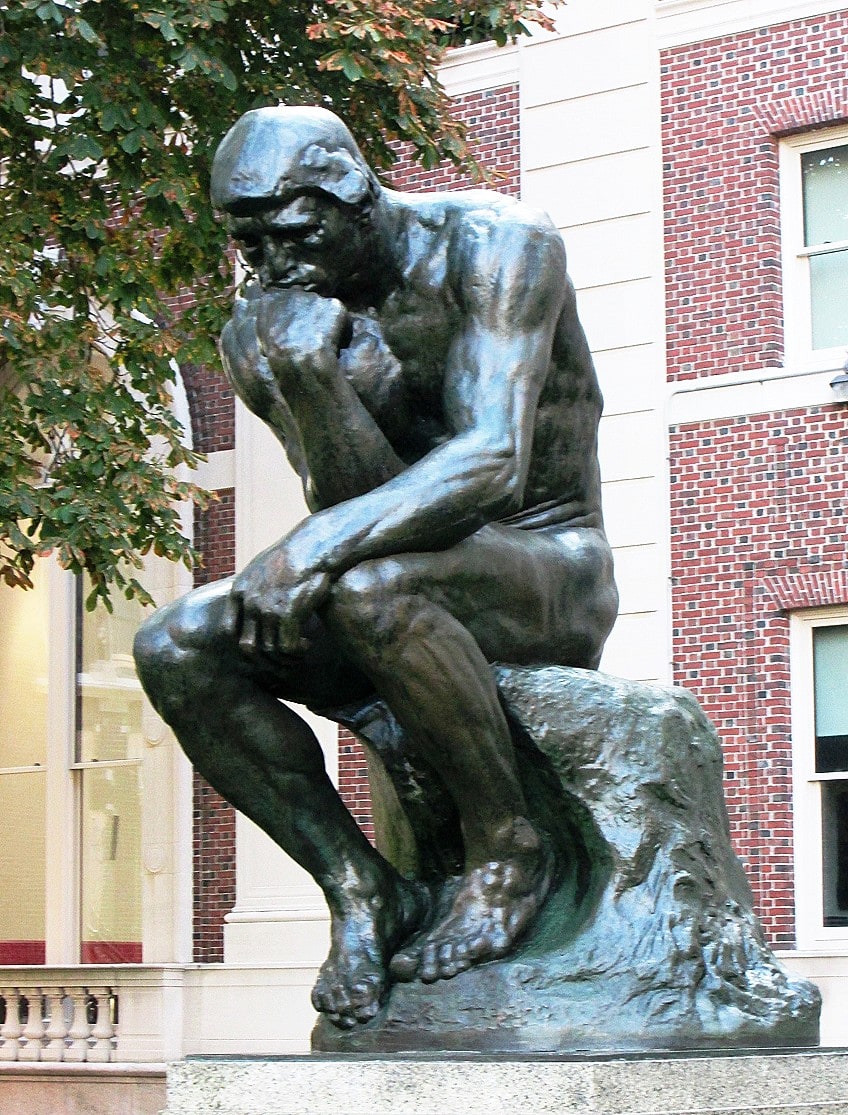 A casting of Auguste Rodin’s The Thinker (Le Penseur) on Columbia University’s Morningside Heights campus, directly in front of Philosophy Hall, which houses the university’s Philosophy Department; Beyond My Ken, CC BY-SA 4.0, via Wikimedia Commons

Rodin’s The Gates of Hell included a representation of a naked man stooped down in apparent meditation. The Thinker statue by Auguste Rodin is counted amongst the most renowned statues in the world. Even if you believe you know everything there is to know about thoughtful carving, this list is sure to surprise you.

The Artwork Was Influenced by Michelangelo’s Work

Rodin was not, however, consciously referencing Michelangelo’s posture. Rodin opted to create his Thinker naked in the spirit of Michelangelo and his Renaissance contemporaries’ heroic nudes. Rodin’s contemporaries, German artist Hugo Rheinhold, are also said to have had an influence.

According to art historians, the two were interested in positions that promoted genuine and realistic human postures.

The Statue Nearly Had Clothes

Rodin flirted with the notion of a clad Thinker throughout the protracted building of The Gates of Hell. He stated, “Thin ascetic Dante in his straight garment apart from all the others would have been meaningless.” “I tried to imagine yet another thinker, a nude man perched on a rock, with a fist pressed against his mouth, dreaming, guided by my initial idea. Within his mind, the fruitful concept steadily develops. He is no longer considered a dreamer, but rather a maker.” 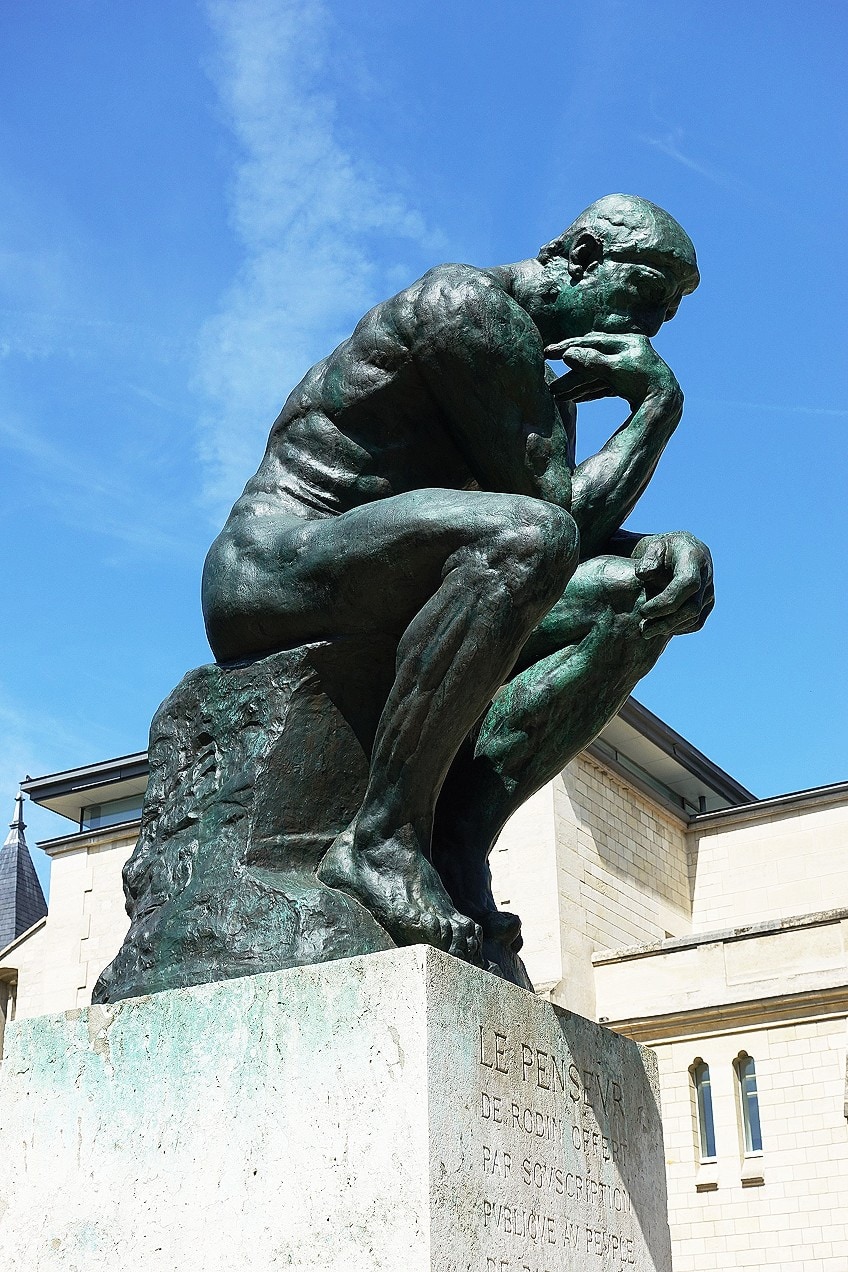 Rodin Made a Significant Reappearance with His Larger Sculptures

During the 1890s, the sculptor worked on an impressionist statue called Monument to Balzac. This odd take on a memorial statue was commissioned to honor the 19th-century French author Honoré de Balzac, and the commissioners, the Society of Men of Letters, vowed to sue.

Rodin was obliged to return the work, which he kept at his Meudon residence. With the roaring popularity of “The Thinker” at the turn of the century, many forgot about his enormous blunder.

The Thinker is normally placed outside, and when the Cleveland Museum of Art obtained a casting, it followed suit. As a result, when anonymous bombers tied three sticks of dynamite to The Thinker‘s base in the early hours of March 24, 1970, it was defenseless. 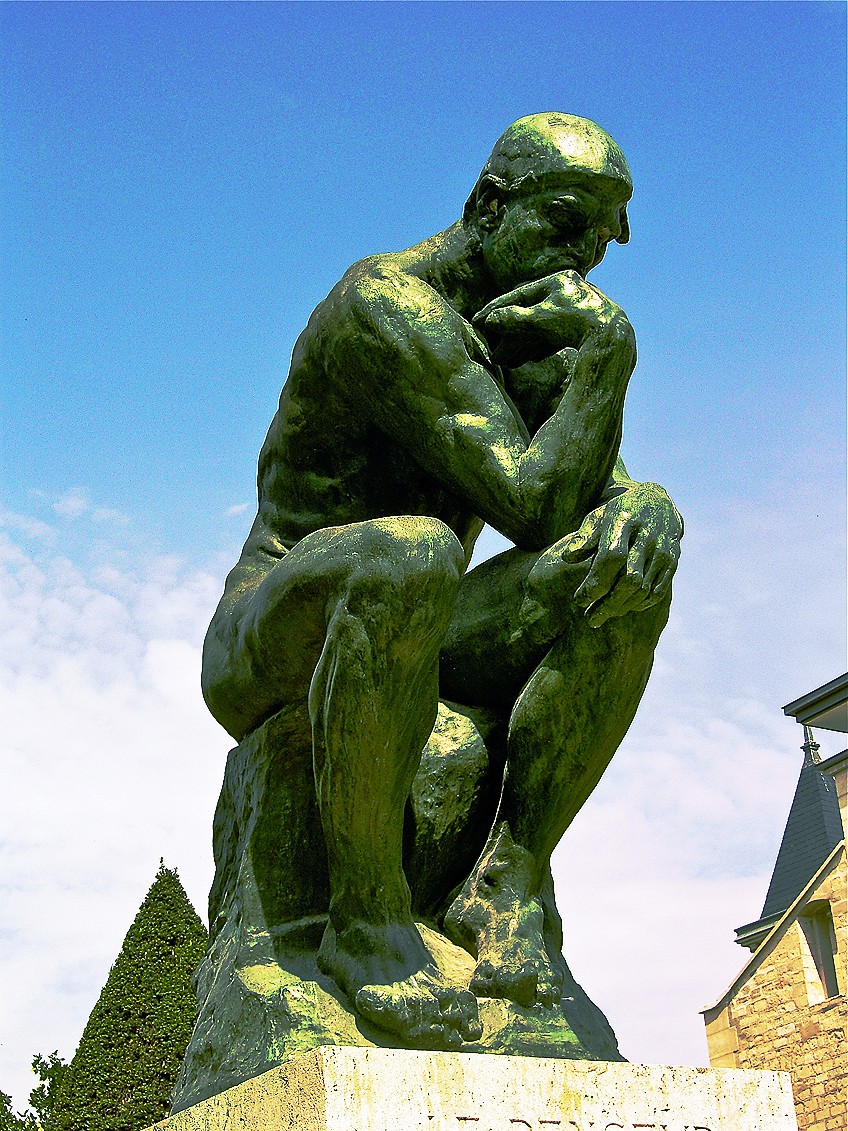 The Thinker’s feet were blown off by the explosion, and his legs were permanently injured. Local authorities suspected the Weather Underground of being behind the bombings, but the bombers’ names have never been revealed. The sculpture has not been renovated and is still on display.

Take a look at our The Thinker sculpture webstory here!

Where Is The Thinker Statue?

This famous statue is located at the Rodin Museum. The Musée Rodin in Paris, France, was founded in 1919 and is principally devoted to the artworks of Auguste Rodin, a French sculptor. There are many casts around the world.

Who Sculpted The Thinker?

Auguste Rodin’s story symbolizes the struggle of every contemporary artist. Despite his early promise, he was born into obscurity and overlooked by the traditional academies. He began his career as an ornamental sculptor before rising to international notoriety as a result of fame and scandal. By the time he passed, he had been likened to Michelangelo. 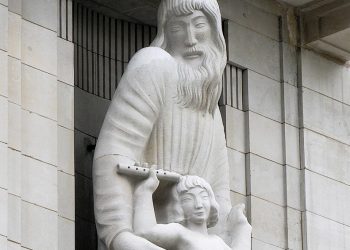 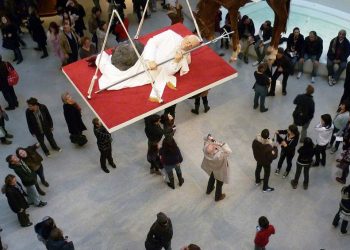 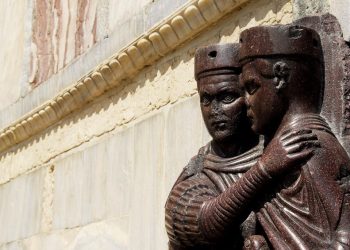