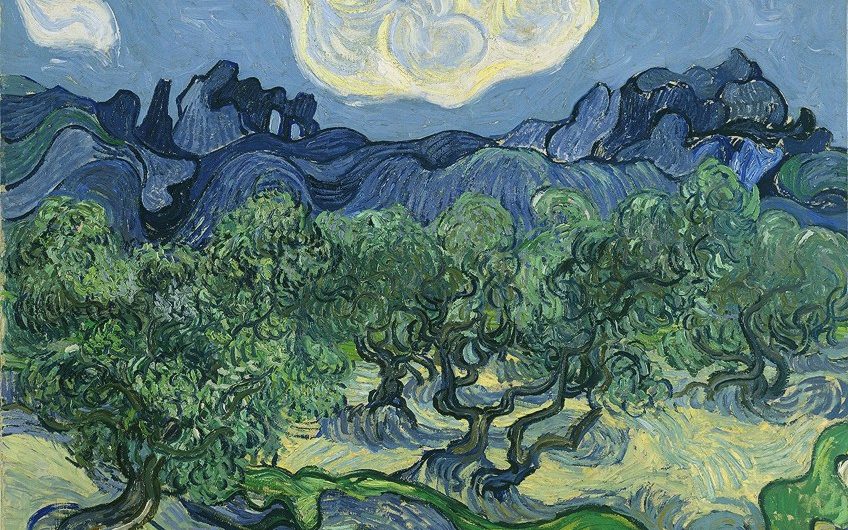 The Olive Trees (1889) by Vincent van Gogh is one of around 15 versions of olive trees that the famous Dutch artist created and explored when he lived in France. This is the painting that will be discussed in the article below.

Vincent Willem van Gogh is one of the most well-known artists from the 19th century. His date of birth is March 30, 1853, and his date of death was July 29, 1890. He was a Dutch artist, born in the town called Zundert, in the Netherlands.

His style of art has been categorized within the post-Impressionist art movement and is characterized by his expressive use of brushstrokes, arrangements of colors, and subject matter that ranged from portraits, landscapes, flowers, and people from all walks of life.

A lot can be learned from his correspondence with his brother Theo van Gogh; the brothers wrote extensive letters to one another, and although he lived a short life, he made a long-lasting impact on the world. His artworks are on display at prominent art galleries as well as at the Van Gogh Museum in Amsterdam. Vincent van Gogh’s famous artworks include The Starry Night (1889), The Potato Eaters (1885), and Almond Blossoms (1890). 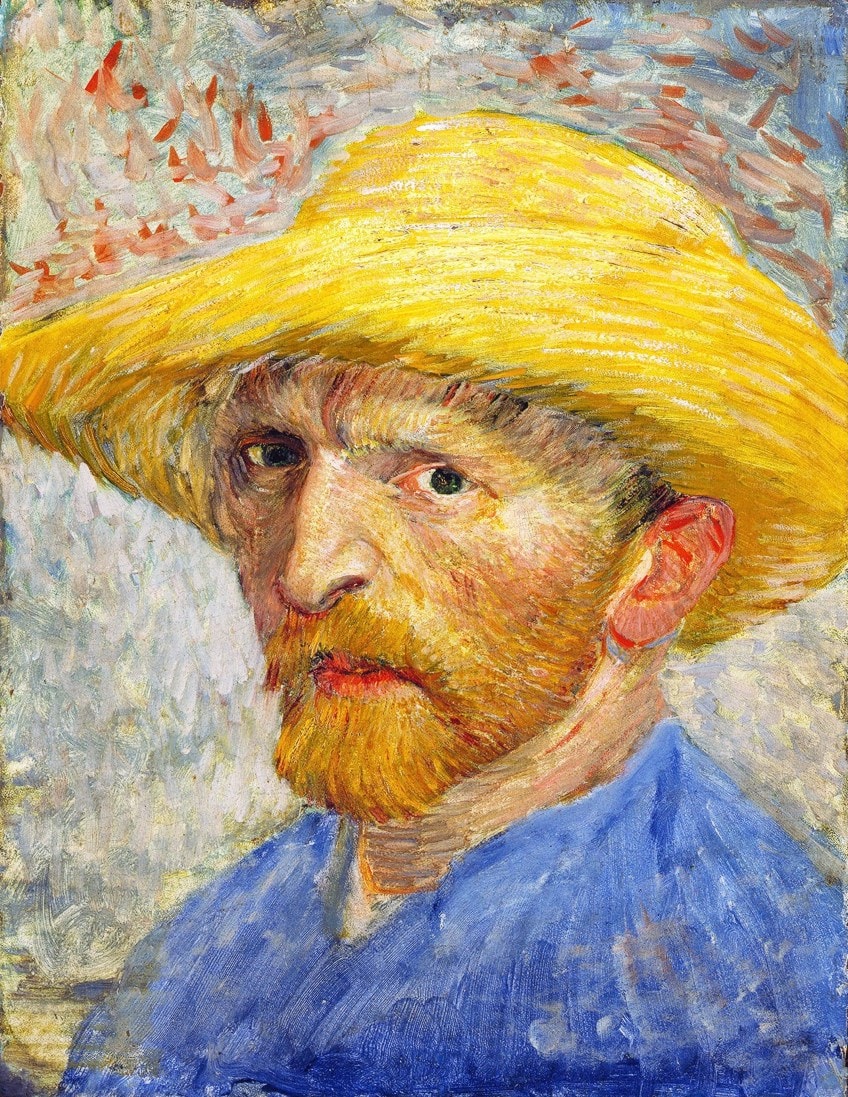 The Olive Trees (1889) by Vincent van Gogh in Context

The Olive Trees by Vincent van Gogh is also sometimes referred to as Olive Trees in a Mountainous Landscape or Olive Trees with the Alpilles in the Background. It is an oil-on-canvas study that was deeply meaningful to the artist, which we will explore further in the contextual analysis below. We will also provide The Olive Trees analysis in terms of its formal qualities and examine Van Gogh’s composition of the subject matter.

When Vincent van Gogh painted The Olive Trees in 1889, he was living in southern France in Saint-Rémy-de-Provence at a mental institution called the Saint-Paul Asylum. He explored the natural environment during his time there, painting the scenery that consisted of wheat fields, cypress trees, flowers, as well as olive groves. He also had a painting studio from which he worked at the asylum.

However, his exploration of the natural environment was driven by a deep connection that he felt with nature, and he reportedly found solace in it and comfort during his illnesses. He often wrote about his awe of nature to his brother Theo van Gogh.

For example, in a letter dated around January 1890, Vincent van Gogh described to his brother how he got up during the night to look at the landscape: the snow was melting as it fell, and he explained that “never, never has nature appeared so touching and so sensitive to me”.

The Starry Night by Vincent van Gogh was reportedly The Olive Trees painting’s companion piece. In a letter that Van Gogh wrote to his brother he described the two paintings, stating that the olive trees “with white cloud and background of mountains, as well as the Moonrise and the Night effect”, are “exaggerations from the point of view of the arrangement”.

Additionally, Vincent van Gogh further compared the lines to “ancient woodcuts”. Interestingly, he was influenced by and loved Japanese woodblock prints; he also owned an extensive collection of them. 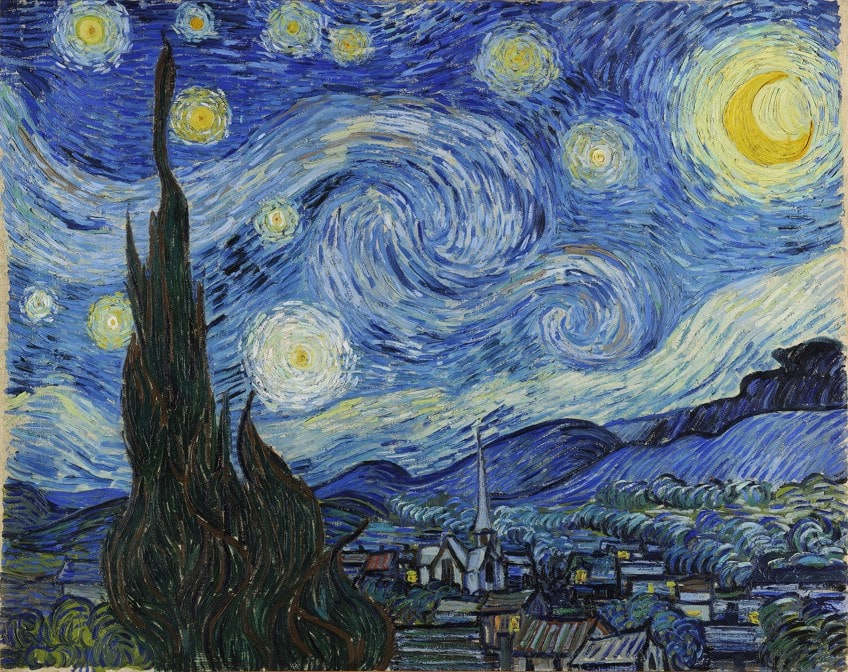 In this section, we will provide a discussion of the visual composition of The Olive Trees by Vincent van Gogh, as well as an analysis of his artistic style in accordance with the art elements like color, texture, line, shape, form, and space, respectively. 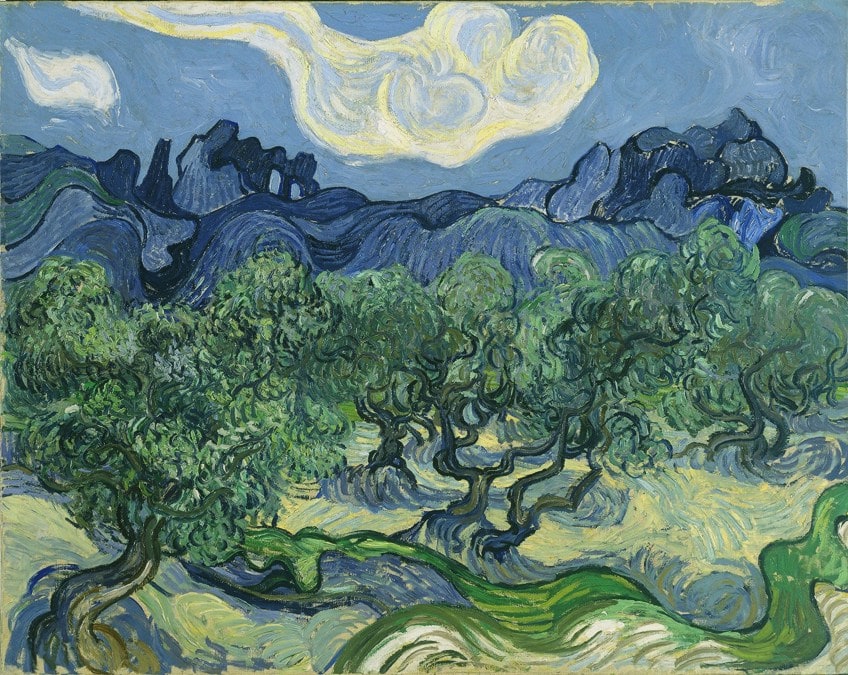 The Olive Trees painting by Vincent van Gogh depicts an olive grove in the foreground, with mountains in the background and a sky with clouds. Almost every part of this composition is alive with rhythm, movement, and color.

There are two cloud formations in the blue sky above.

Towards the top left corner is a small, almost ovular S-shaped white cloud. To its right is a larger, light (or “pale”) yellow and white cloud with a thin tail (almost like an umbilical cord) from the top border of the composition, which forms into a larger accumulation of swirls in the top center, right above the middle mountain range.

Below the blue band of the sky with clouds is the Chaîne des Alpilles, which is a mountain range in southern France and what would have been one of Vincent van Gogh’s views, forming part of the subject matter of numerous of his paintings.

In this composition, the mountains are a dark bluish-purple color.

In the foreground, nestled below the mountain range, is an olive grove, depicting around four or more trees and the ground below them. The trees appear lush and bushy with their green leaves, and their stumps are visible in the ground. The ground below does not appear flat, but up-heaved and undulating. It is a combination of greens, yellows, blues, and whites.

The yellow on the ground has been described as the subtly shining light from above. 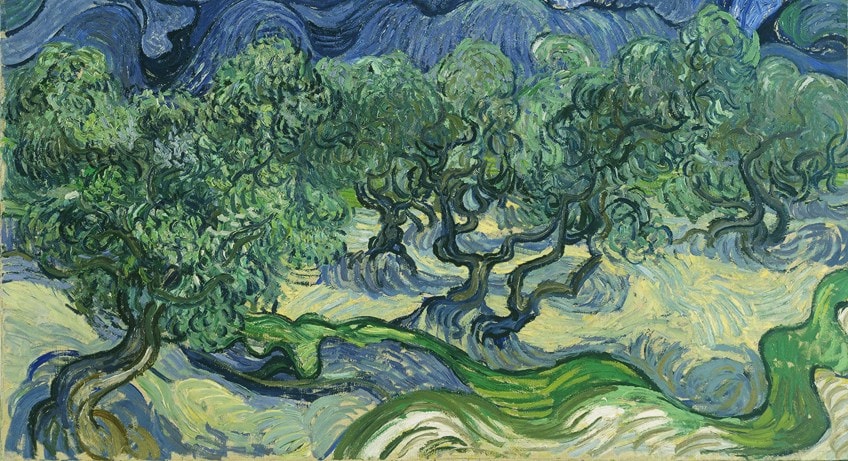 The texture in The Olive Trees painting is dynamic and Van Gogh’s brushstrokes are tangible on the canvas with a variety of types like thick, thin, short, and long – all fluid and expressively applied. For example, the sky consists of short swathes of brushstrokes, seemingly haphazardly applied.

The foliage of the trees consists of curvy, almost arabesque-like, and choppy brushstrokes while the ground below appears in longer and curvy horizontal bands of brushstrokes. 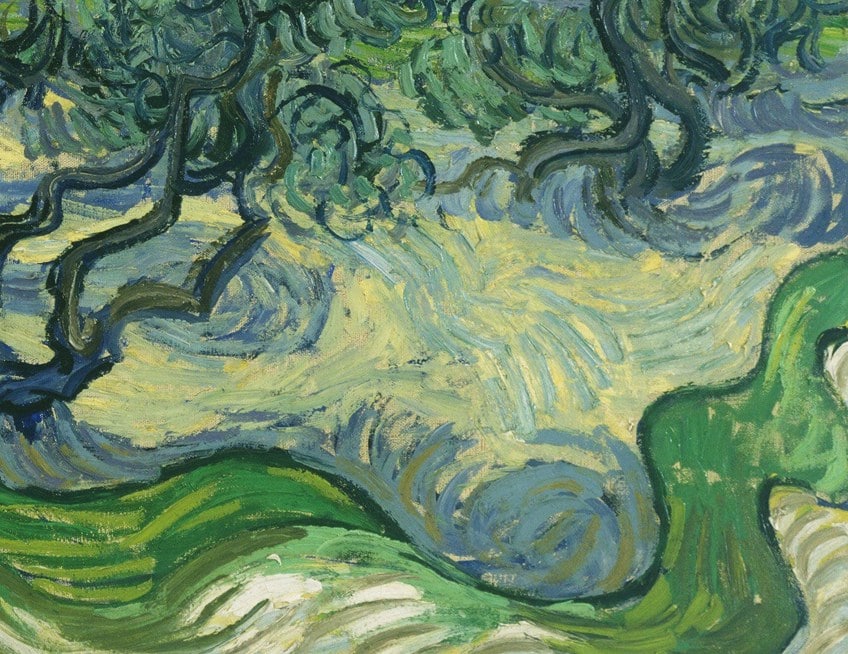 Vincent van Gogh composed The Olive Trees painting through fluid brushstrokes, which are visibly evident and create various types of lines. There are curved, curly, and spirally lines, all organic (naturalistic), which gives the composition harmony and movement created by the rhythmic flow of the lines.

Additionally, there is also a pattern created by the repetition of the types of lines.

The Olive Trees by Vincent van Gogh depicts various shades and tints of green, blue, and yellow with whites and black. Interestingly, blue held a symbolic meaning to Van Gogh – reportedly, it symbolized the “divine”, which the artist sought to convey through his pictorial compositions.

There are organic and naturalistic shapes and forms in The Olive Trees by Vincent van Gogh, for example, the swirling form of the large cloud in the sky, the craggy mountain tops, the bushy forms of the trees and their crooked stumps and branches. The ground appears less “realistic” and more undulating, as if it is flowing.

This hints at Van Gogh’s deeper perception of the environment, which was not wholly true to reality.

The compositional space appears in bands of thirds and can be viewed as foreground, middleground, and background.  There is a three-dimensionality in The Olive Trees painting, created by the dark colors of the mountains in the background and the slightly lighter colors in the foreground on the trees and ground.

Furthermore, there is a sense of distance created by the size of the mountain tops in the background, which appear slightly smaller than the trees in the foreground. 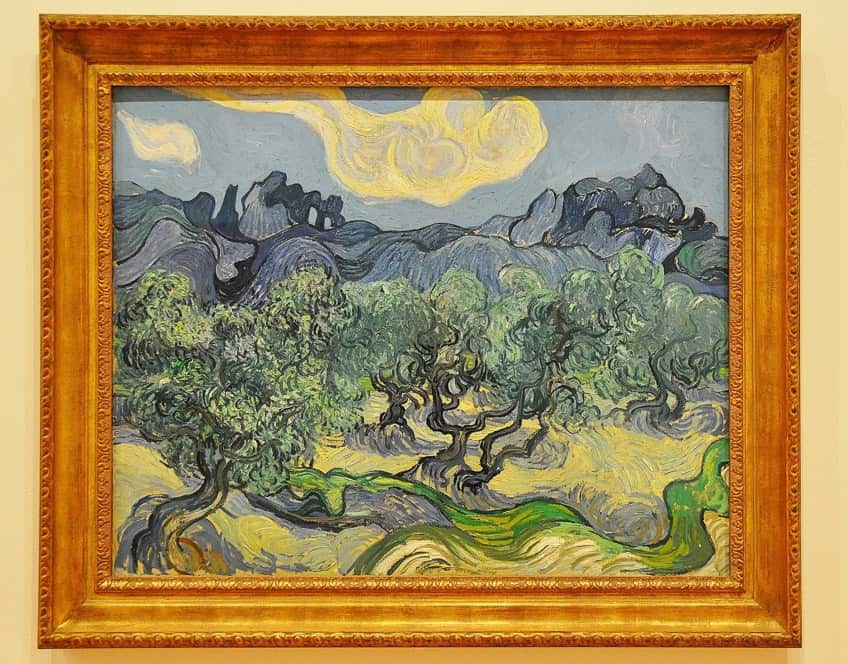 The Olive Trees (1889) by Vincent van Gogh framed and on display at the Museum of Modern Art (MoMA) in New York, United States; Vincent van Gogh, CC BY 2.5, via Wikimedia Commons

Van Gogh: Nature in the Brushstrokes

Vincent van Gogh was not only a painter but a lover of nature, which he had a deep reverence and appreciation for from a young age. Some also say that his art was intricately connected with nature, and we can even say nature was intricately connected with his art. He often painted outdoors and would write about how he saw the more spiritual aspects of nature in many of his letters.

In this “The Olive Trees” analysis, we discussed when Vincent van Gogh painted it and the deeper meanings related to it, as well as his stylistic approach. What we see as a painting with olive trees is truly a painting seen through Van Gogh’s heart and soul, nature is not only an image, but it is in the physical brushstrokes too.

Who Painted The Olive Trees?

The Olive Trees (1889) paintings were created by Vincent van Gogh, who was one of the most popular post-Impressionist artists who primarily achieved posthumous popularity. He created numerous renditions of olive trees and the surrounding natural environment when he lived at the Saint-Paul Asylum.

How Many The Olive Tree Paintings Are There?

Reportedly, Vincent van Gogh created around 15 versions of The Olive Tree paintings, all depicting different times of the day. Some included figures like a couple walking at night, and others depicted women and men in the process of picking olives. The versions also held symbolic meanings related to the divine, the so-called life cycles, as well as nature.

Where Did Vincent van Gogh Paint The Olive Trees?

Vincent van Gogh painted The Olive Trees painting series when he lived at the mental asylum in Saint-Rémy-de-Provence in the South of France. Reportedly, he went there after he suffered from a mental breakdown in 1888 when he lived in Arles, which was just after he lived in the Yellow House with his fellow artist and friend Paul Gauguin. 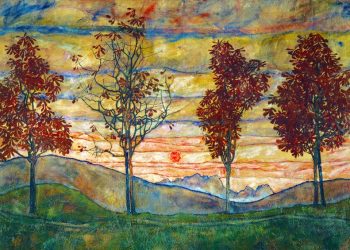 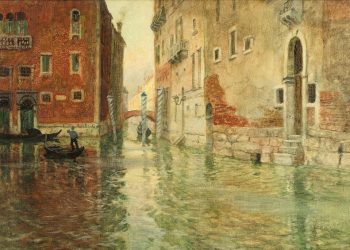 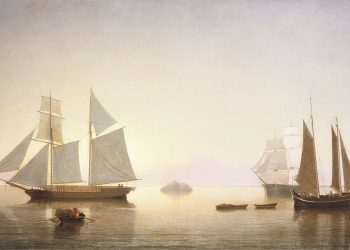