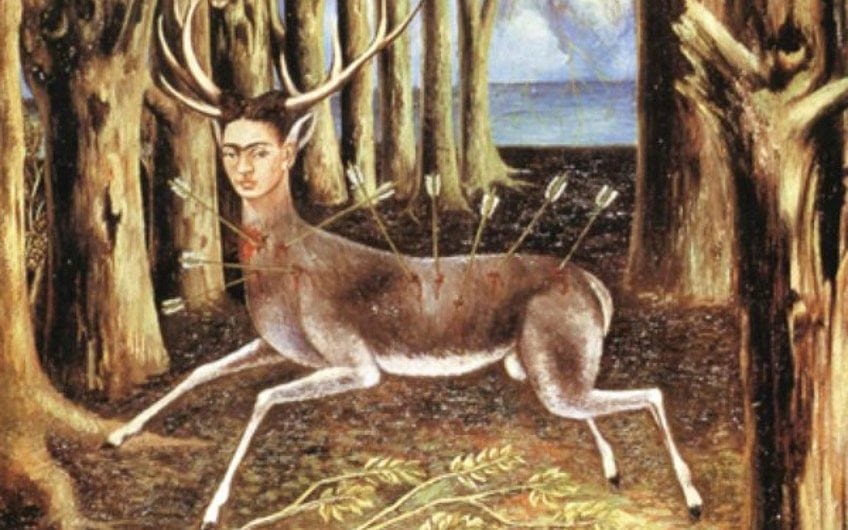 Anyone familiar with Frida Kahlo’s paintings will know that she was an icon of 20th-century art, renowned for her honest and often heart-wrenching depictions of herself and the world she lived in, among these was The Wounded Deer (1946), which is the painting that this article will explore and discuss.

Artist Abstract: Who Was Frida Kahlo?

Frida Kahlo was born on July 6, 1907, and died July 13, 1954, in Coyoacán in Mexico City, although her father, Carl Wilhelm and later Guillermo Kahlo, was from Germany and her mother, Matilde Calderón y González, was Mexican-born. Frida Kahlo had three sisters and two half-sisters, who were from the first marriage of her father. She did not have any children of her own and was married to the artist Diego Rivera, whom she divorced and then remarried.

Frida Kahlo quickly became one of the most revered female artists of the 20th century.

Her art has been categorized within a variety of art movements, such as Surrealism, Primitivism, Magic Realism, and Naïve art. But essentially, she painted in her own style, addressing issues of colonialism, gender, sexuality, and cultural identity. 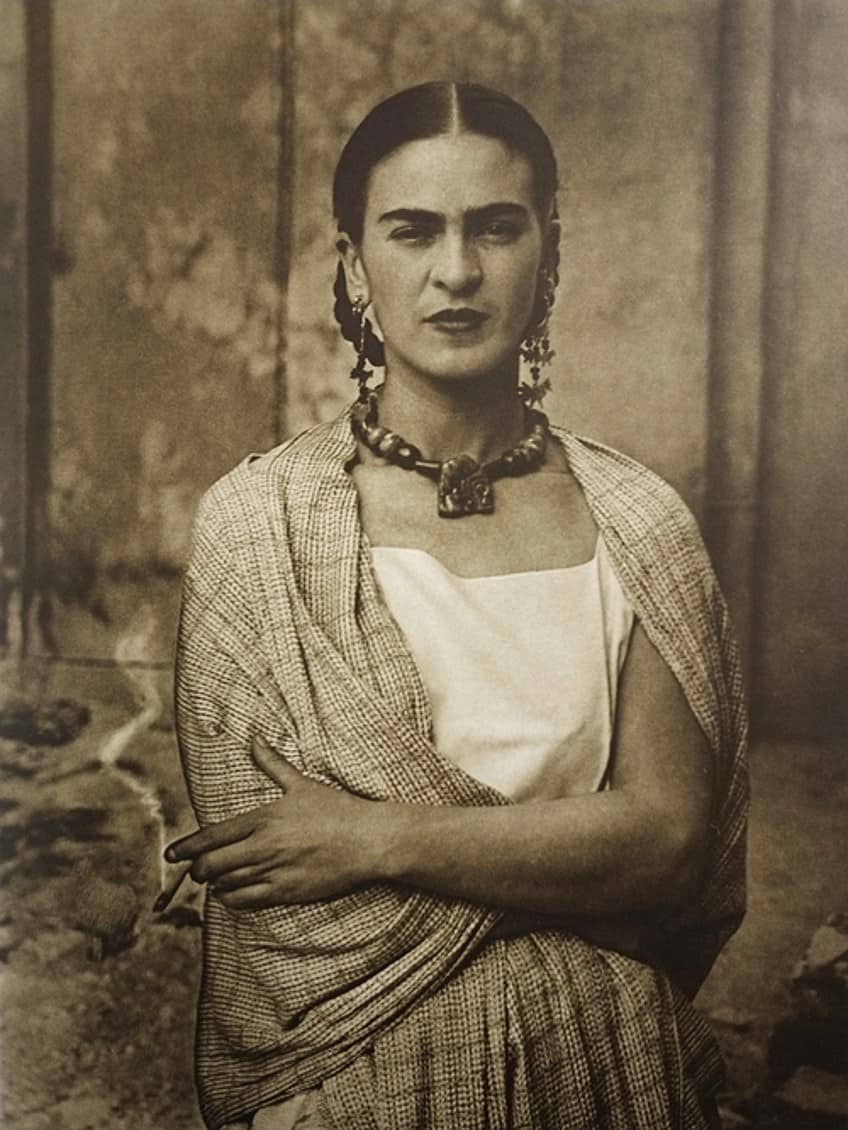 The Wounded Deer (1946) by Frida Kahlo in Context

In the article below we will discuss The Wounded Deer analysis, which was one of Frida Kahlo’s later artworks and is filled with symbolism. We will explore when she painted it and what may have inspired her. This will be followed by a formal analysis, discussing the subject and visual composition as arranged by formal art elements.

The Wounded Deer by Frida Kahlo is also titled The Little Deer and in Spanish, El Venado herido. It was painted in 1946, during a time in her life when she experienced disappointment and undoubtedly feelings of hopelessness. Reportedly in 1945, she went for spinal surgery in New York, but it was not successful, and her health worsened over time.

Additionally, in 1940, Kahlo remarried Diego Rivera after the couple got divorced in 1939, but their relationship was strained and caused Kahlo significant heartbreak and agony.

In fact, she has often been quoted as saying that she “suffered two serious accidents” in her life, namely, a “streetcar”, and then Diego Rivera. She produced numerous other paintings during this time that also depicted her agony, such as The Broken Column (1944), Without Hope (1945), and Tree of Hope, Remain Strong (1946). 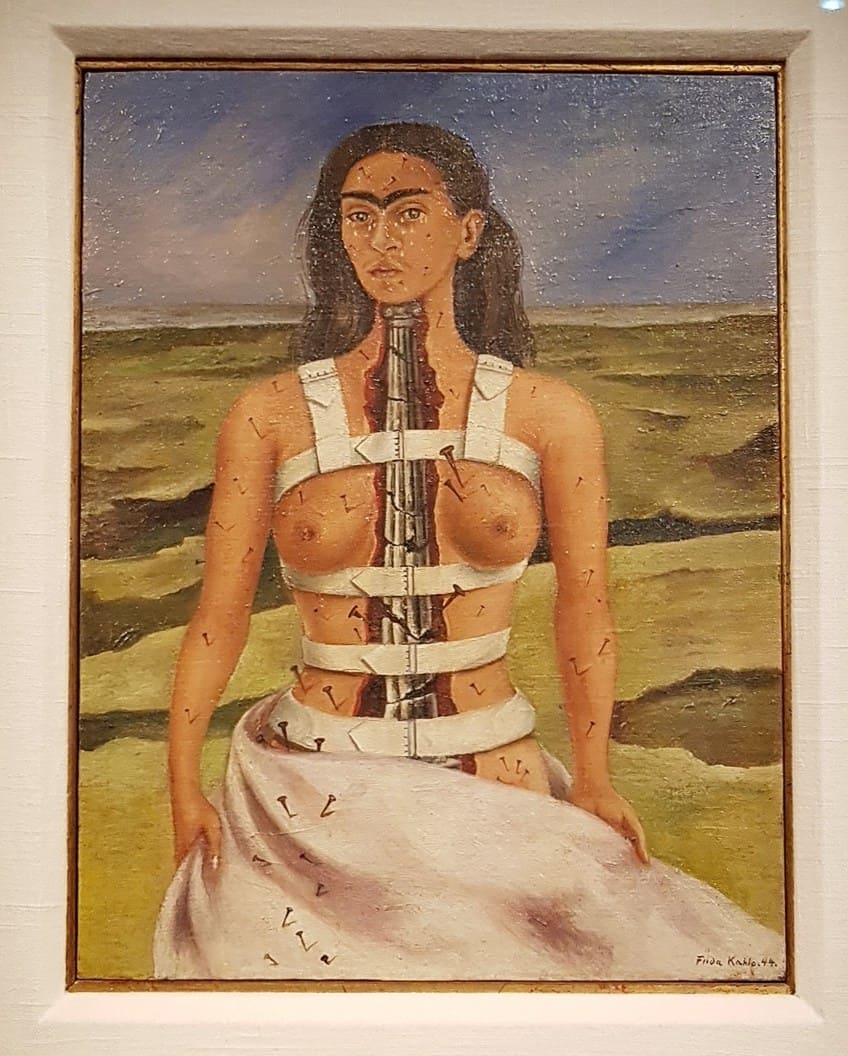 Frida Kahlo reportedly painted The Wounded Deer as a wedding present to her friends Arcady and Lina Boytler. She also wrote an accompanying note to them (believed to be on a napkin), which she left them a portrait to remember her by, further explaining the “sadness” that is depicted in all her paintings and that it is how her “condition” is and that it “cannot be fixed”.

Additionally, she also wrote something else on the reverse side of the napkin, which read: “The deer walked alone, sad and very hurt, until he found in Arcady and Lina the warmth and a nest”. 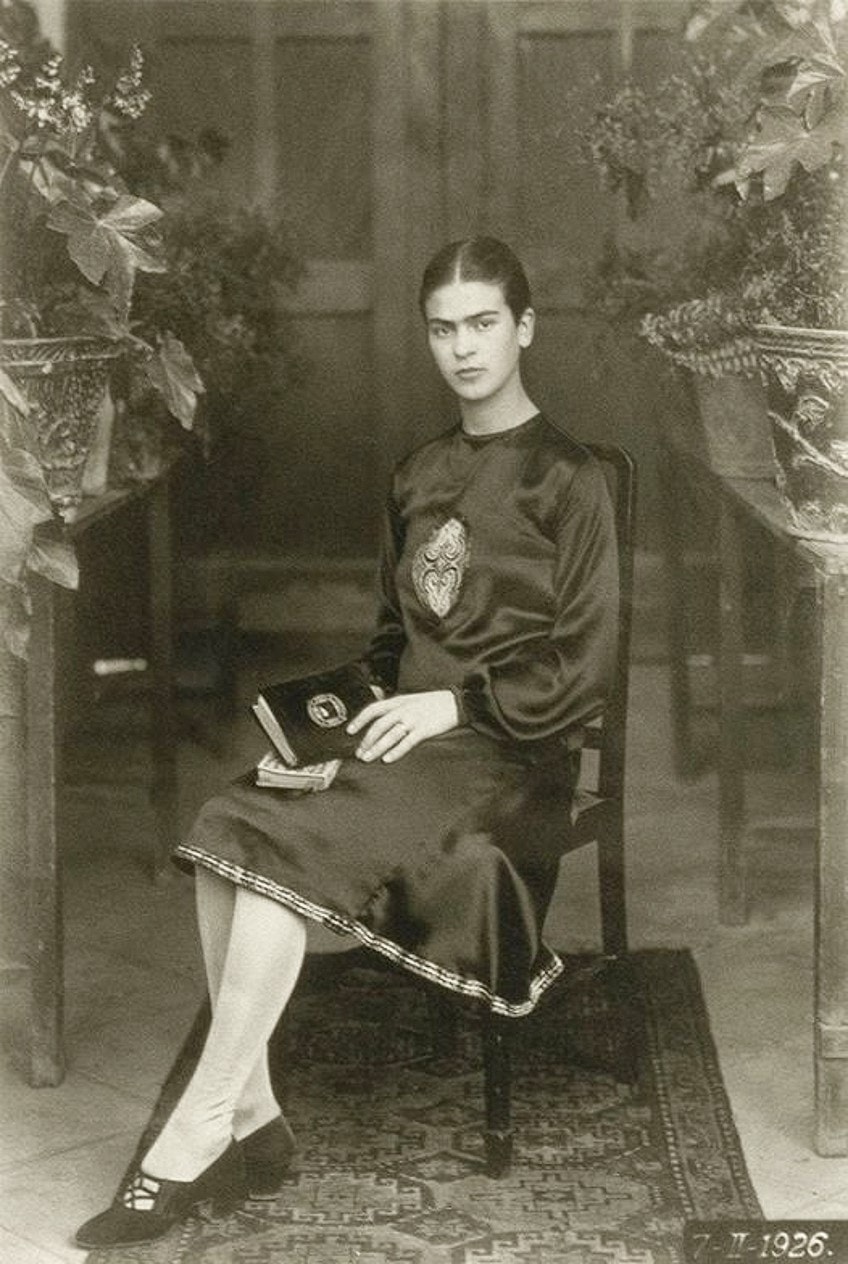 There are several symbolic references in The Wounded Deer by Frida Kahlo, and many have interpreted this painting in numerous ways. Some of the more common references include the following, namely the Christian religious reference to Saint Sebastian. He was a martyr and saint who was shot with arrows while he was tied up. This similarity of suffering is echoed in the deer shot with nine arrows, suggesting that Kahlo possibly became a martyr too.

Interestingly, the deer was believed to be modeled after Kahlo’s pet deer called Granizo.

The deer also hints at Frida Kahlo’s fatal accident when she was younger, which also caused damage to her right foot and leg. In The Wounded Deer painting, the deer’s front right foot has been described as elevated off the ground, and this could indicate that Kahlo was alluding to her own right foot. 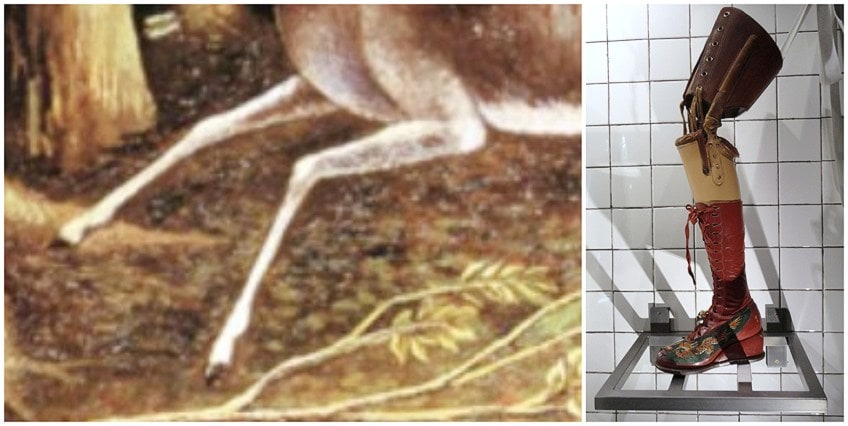 Furthermore, the deer may also be a symbol of the right foot in the ancient Aztec tradition. The arrows piercing the deer clearly represent Frida Kahlo’s pain and the physical suffering inflicted by them, just like the physical suffering she experienced from her operations. The number nine is also prominent in The Wounded Deer painting. Reportedly, Frida Kahlo’s date of birth was on the ninth according to the Aztec calendar, which correlates with the nine arrows as well as the nine trees to the left of the composition.

The word “Carma” in the bottom left corner of painting is also believed to be a symbol of fate and possibly what Kahlo perceived as her fate, and reportedly something she could not change.

The broken branch in front of the deer has been associated with the funeral rites in Mexico where a branch is placed on the grave of the person who has died. This can also point to Kahlo’s beliefs around her own death.

This section will discuss a visual description of The Wounded Deer by Frida Kahlo as well as her stylistic approach according to the art elements of color, texture, line, shape, form, and space. 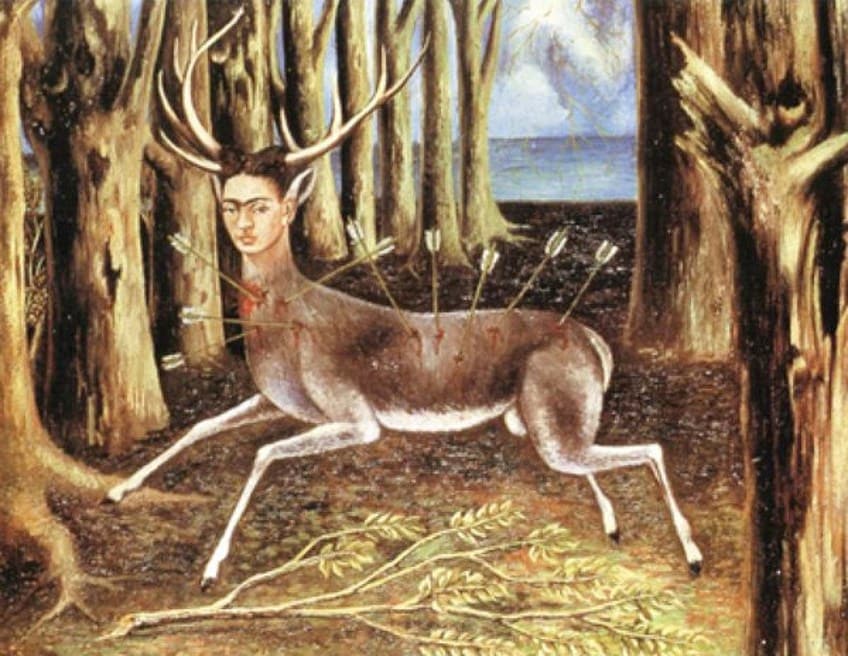 Frida Kahlo’s The Wounded Deer painting depicts a deer, specifically a stag, as the central figure; however, the head is human, and more specifically that of Frida Kahlo’s. She is looking directly at the viewer with little to no sign of emotion; her expression appears almost neutral.

She has a large pair of antlers growing from her dark brown hair and deer ears seemingly growing by her human ears. 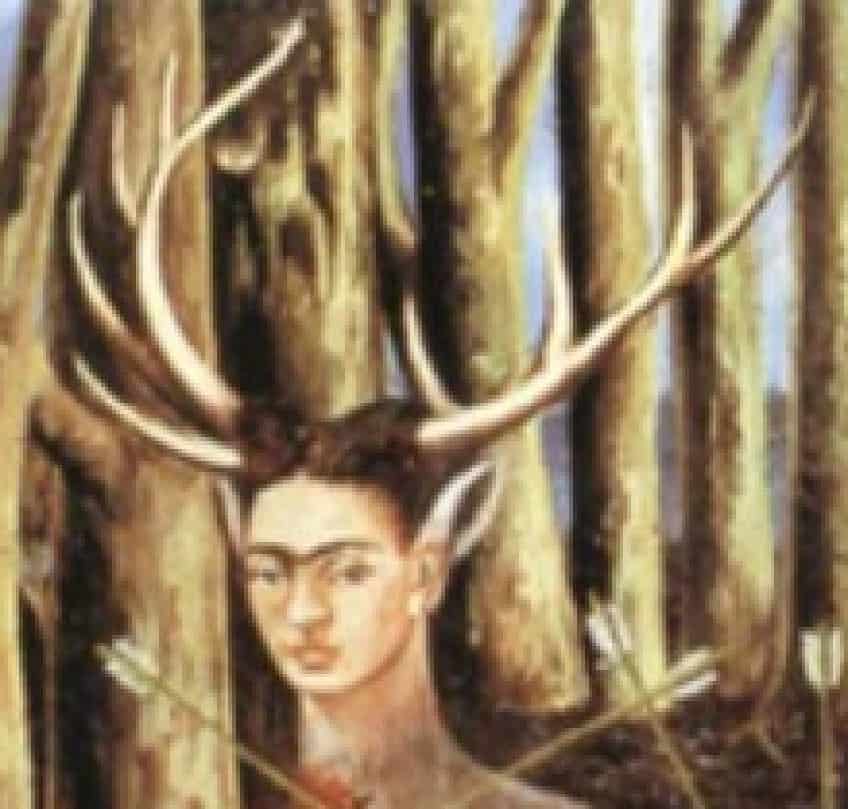 The deer is standing on all fours and is placed slightly more in the foreground. There are nine arrows shot into her (or the deer’s) body. One can see four arrows that pierce the neck and chest area, and five along the upper back.

There is blood dripping from each point of entry from the arrows.

There is a broken branch with leaves lying on the ground in front of her. Additionally, the deer is in a forest surrounded by rows of trees on either side of her. There are nine to the left of the composition (her right) and what appears to be two in sight to the right (her left).

In between the trees is a grounded pathway with what appears to be dead foliage on the ground, possibly leaves that have fallen from the trees. The background opens to what appears to be the ocean, with the horizon line meeting the blue, cloudy, sky above.

There is a vein-like lightning bolt striking down from the central cloud in the sky. 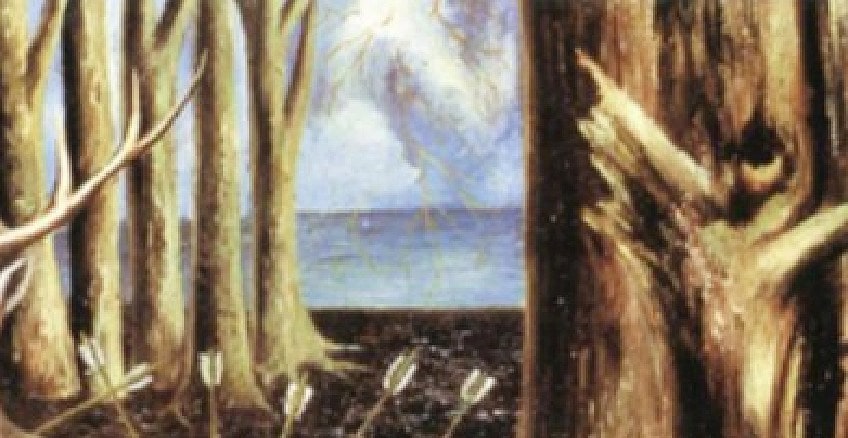 In the bottom left corner of the composition are Frida Kahlo’s signature and the date she painted it, as well as the word “Carma”, which reportedly means “fate” and hints at Buddhist beliefs about life and karma.

The color scheme in The Wounded Deer by Frida Kahlo consists of more earthy colors like browns, beiges, greens, blues, and red, as well as neutrals like white. There are no overt bright colors, and the composition appears harmonious in its color scheme. The foreground appears lighter compared to the background, which also adds emphasis to the figure of the deer and Frida Kahlo in the foreground.

The Wounded Deer painting is on a two-dimensional surface; therefore, texture can consist of the “tactile” qualities of the paint on the canvas, or it can be implied, in other words, how the subject matter would feel in real life or as it is often described the “illusion” of three-dimensions.

Frida Kahlo included a variety of implied textures in “The Wounded Deer” painting.

For instance, note the textures of the soft, short, and almost bristly appearance of the deer’s fur; the patchy and furrowed bark on the surrounding trees; the soft, scumbled texture of the clouds; and the smooth and slightly wavy surface of the water in the background. 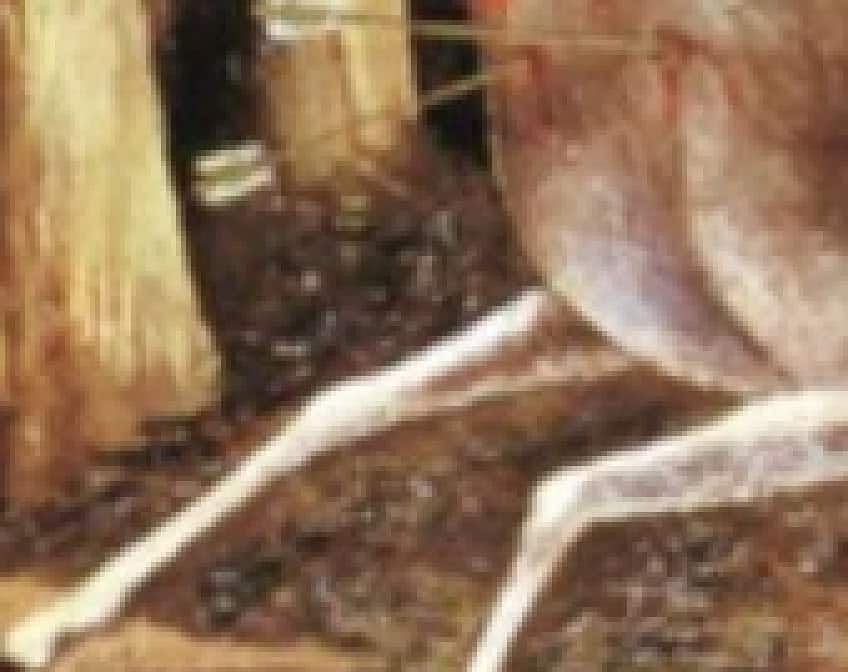 There are different types of lines in The Wounded Deer painting that lead our (the viewers), gaze around the composition, from the strong vertical lines created by the trees to the left and right to the more subtle horizontal line created by the horizon line in the background.

Diagonal and curved lines appear from the tree branch lying in the direct foreground as well as the deer’s antlers, and legs, the arrows puncturing its skin, the protruding branches of the trees, and the thin and fine lines of the lightning bolt in the background.

Shape and form as elements of art can appear as organic (natural) or geometric (artificial or “manmade”). In The Wounded Deer by Frida Kahlo, organic shapes and forms are dominant; in other words, the artist portrayed a scene that follows what would be seen in a natural environment. Although the composition of “The Wounded Deer” painting appears curvier and unstructured in its forms, and some shapes are evident. For example, the trees are created from what appear to be almost elongated cylindrical shapes. 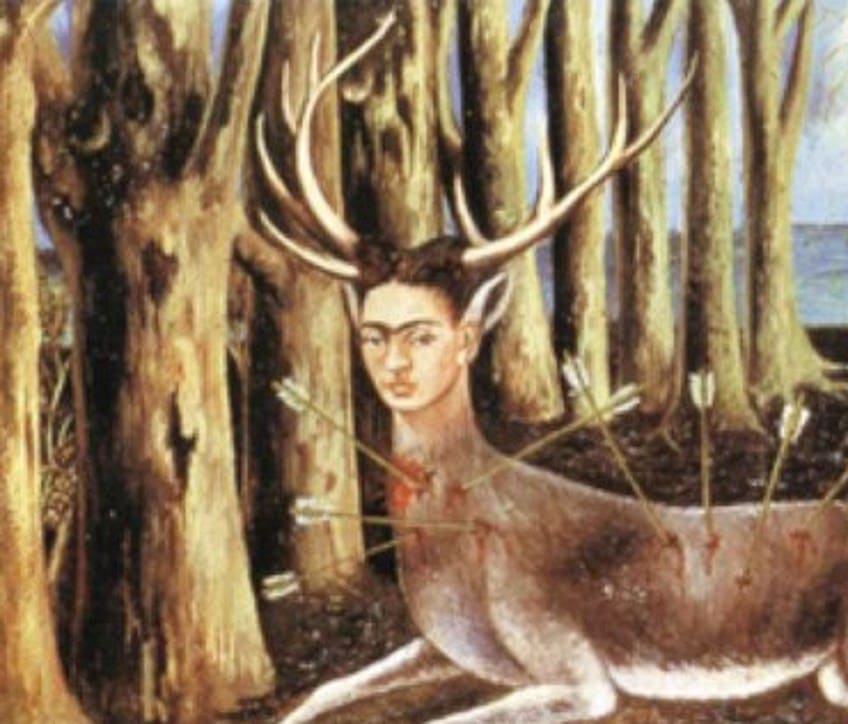 Space in The Wounded Deer by Frida Kahlo is composed of the foreground, which highlights the central figure of the deer and Kahlo, and the background which depicts the ocean and the lightning bolt. There is a sense of perspective created by the rows of trees on both sides of the Kahlo-deer figure, which seemingly converge toward a narrower opening towards the background, but also create a backdrop effect that highlights and brings the figure more forward, as if on a stage.

There is also a sense of depth created around the compositional space. 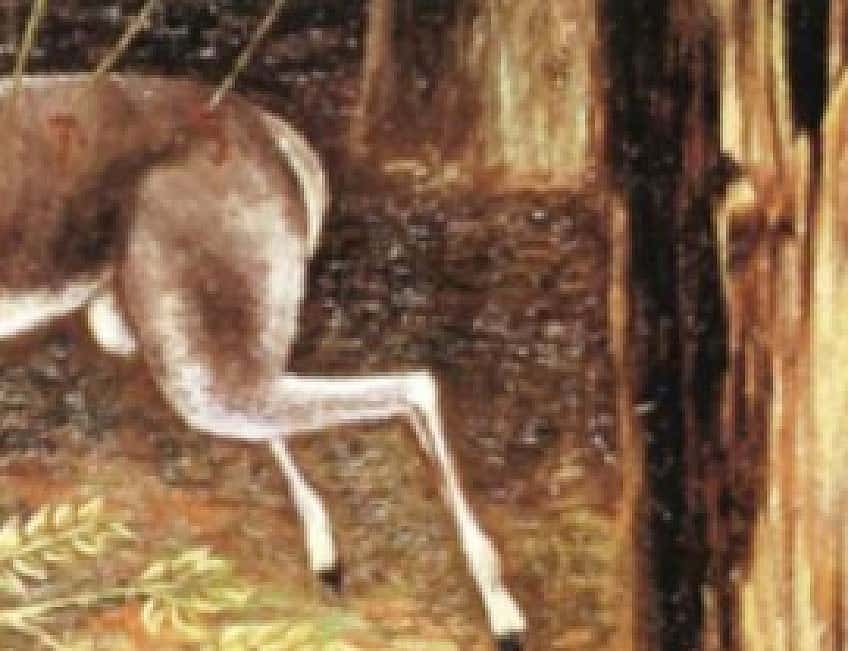 This article explored and discussed The Wounded Deer analysis by Frida Kahlo, a visual representation of the suffering she experienced throughout her life, which was not an easy one. She was riddled with pain and suffering from her injuries and seemingly her only true catharsis was through her paintings, from being bedridden to broken, hopeless, and disappointed, she seemingly never gave up on keeping each bristle and brushstroke teeming with life.

Frida Kahlo left a legacy of her own in the art world, becoming an exemplary female artist who created art based on her own rules and paved the way for other female artists to express themselves freely and wildly. Furthermore, Kahlo was a reflection of those who also suffered physical and emotional traumas, a beacon of life in what is undoubtedly a dark place to be.

Who Painted The Wounded Deer?

The Wounded Deer (1946) was painted by Frida Kahlo, who became one of the most loved and admired female Mexican artists. She often painted self-portraits that depicted her traumas and heartbreaks, but also her love of her indigenous culture and exploration of socio-political ideals.

What Is The Wounded Deer Meaning?

The Wounded Deer (1946) by Frida Kahlo depicts a deer with the artist’s head, shot by nine arrows still in its body. It is a symbol of her physical and emotional pain, and possibly an aspect of martyrdom, reportedly from a failed spinal operation, which was to help her with a spinal injury from a bus accident when she was 18 years old. It can also be symbolic of the heartbreak from her marriage, and divorce, from Diego Rivera.

Where Is The Wounded Deer by Frida Kahlo?

The Wounded Deer (1946) by Frida Kahlo is part of the private collection of Carolyn Farb in Houston, Texas, the United States of America, who acquired it at an art auction. The exact date and price are uncertain, but reportedly Frida Kahlo was a significant inspiration to Farb.