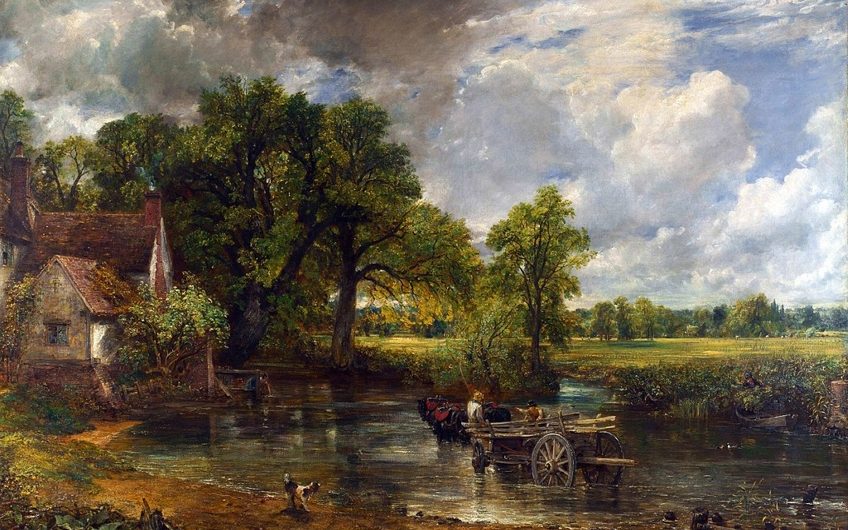 Figure and landscape paintings before the early nineteenth century had an air of romanticism about them. The nineteenth-century saw a move towards a more realistic representation of the world around us. Naturalism became one of the most prominent movements of this century, and many believe that the combination of Naturalism and Realism led to modern art and Impressionism.

A Brief Introduction to the Key Ideas of Naturalism

Naturalism is a complex art movement, and it can be tricky to settle on an exact Naturalism art definition. What is Naturalistic art all about? We find that Naturalism can be best understood in relation to other art movements and styles.

Naturalism and Idealism: Towards a Naturalism Definition

What is Naturalistic art? One of the easiest ways to understand Naturalism is to consider it in comparison to Idealism. Idealism is an artistic concept often related to figure painting, wherein an artist attempts to create a perfect image. Naturalism is, in essence, at the other end of the spectrum to Idealism. Rather than trying to make the world seem perfect, Naturalist painters prefer to depict all the world’s imperfections true to form.

What Is the Difference Between Realism and Naturalism?

Naturalism inherited much from the Realism movement, including the focus on depicting everyday people in everyday situations. Compared to Realism, however, Naturalism was more concerned with hyperreal precision in composition. Furthermore, Naturalism was unique in its attempts to integrate the human form into these scenes and landscapes. It is possible to understand Naturalist art as a fusion of Romantic landscape painting effects and techniques with the Realism ideology.

Although the movements are related and share several similarities, Naturalism in art is distinct from Realism in two critical ways. Realism is a style of true-to-life art that focuses on presenting the world and its social conditions and objects in the most realistic way possible.

The first distinct difference between Naturalism and Realism lies in the content of the paintings. While Naturalism tends to focus on the painting method, including the invention of en plein air painting, Realism focuses on the subject. Typically, Realist painters present ordinary people in everyday situations rather than idealized heroes.

The second distinction lies in the social awareness infused into Realism paintings. Realist painters often promoted political and social issues through their works. Socialist Realism and American Scene Painting are examples of social movements spurred on by developments in the Realism art movement. Naturalist painters were entirely concerned with developing the most natural style of painting. 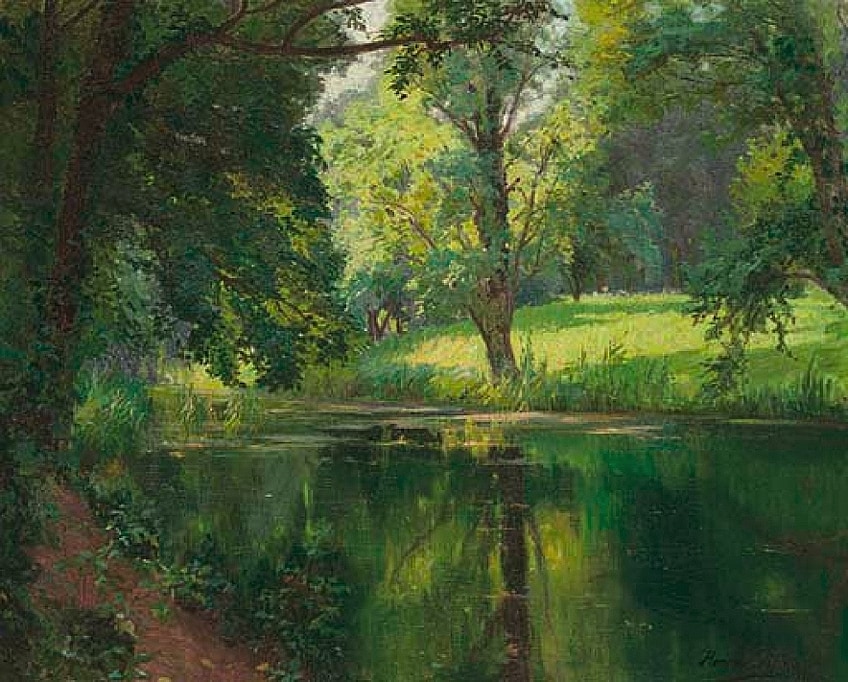 The Development of Photography

Failing to capture the world with the accuracy and speed of a camera, artists tried different techniques. Naturalist painters, however, reveled in this new technology. Using photography on its terms, Naturalist artists produced lifelike paintings unparalleled in any other period.

The Role of Nationalism in Naturalism

Another principal element of Naturalism in art is the way it incorporated regionalist and nationalist sentiments. Naturalist painters would tie their aesthetics to particular locations, often areas that the artists knew intimately, and carried sentimental value. Art historians believe that this tendency to paint scenes of familiarity to many people was integral to the democratization of art. The subjects of Naturalist paintings were familiar and sentimental to a wider viewership. 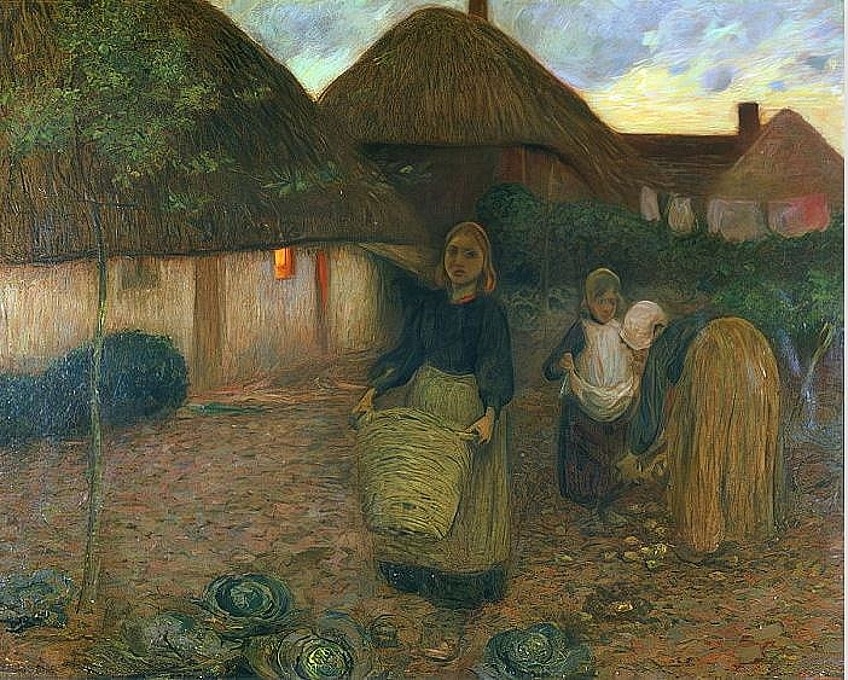 As not all Naturalist paintings are landscapes, so too are all landscapes, not Naturalist. The subjective view of each artist influenced their work in subtle ways. For example, the post-apocalyptic landscapes of John Martin, a religious visionary artist, are thought to represent God’s power. Furthermore, the landscape paintings of Turner lean more towards Expressionist experiments with light and color.

Despite producing landscape paintings, neither of these artists can be considered Naturalist. These artists create works of self-expression rather than attempting to capture the world for the sake of accurate representation.

The Historical Development of Naturalism

Naturalism has a complex history, depending on the artistic medium you consider. In terms of Naturalist sculpture, we could cite the exponents of classic Greek sculpture and their impeccable ability to replicate the human figure. Figurative Naturalist painting took its first steps in the Italian Renaissance with artists like Albrecht Durer, Leonardo da Vinci, and Michelangelo.

The Northern Renaissance, steeped in the Protestant Reformation in Northern Europe, saw a surge in replicating nature in perfect accuracy. Paintings of landscapes, figures, and everyday situations were proliferating during this period. Artists like Jan Vermeer, Aelbert Cuyp, and Willem Kalf created still life, landscapes, and paintings of the human figure in a recognizable Naturalist style. The Counter-Reformation of the Catholic church heralded Idealism, and romanticism reigned for the next century. 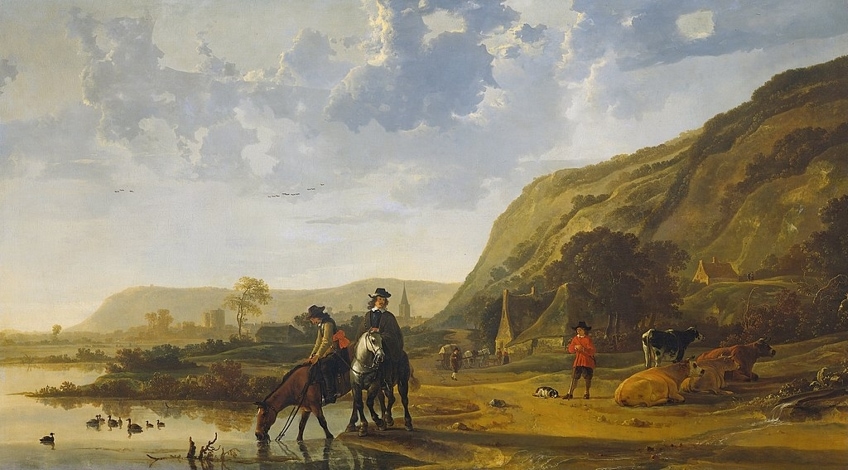 The Naturalism definition and traditions of the modern era have their roots in several groups of artists. These artist groups tried to depict the natural world without subjective interpretation or distortion.

Led by Thomas Cole, an English artist, this school of romantic artists was based in New York City. This school of landscape artists took inspiration from romanticism, and many of their paintings depict the Hudson River Valley.

Art historians believe this to be the most influential Naturalist group, inspiring artists throughout America, Europe, and Australia. The French Naturalist school is renowned for the spontaneous en plein air landscape compositions of its members. Theodore Rousseau led this school, which included artists like Charles Daubigny, Jean-Francois Millet, and Camille Corot. While the Hague school in the Netherlands was adopting a more Impressionist style, the Barbozion school produced a Naturalist alternative that was more true-to-life.

The Hague school took inspiration from the Barbizon school, but with a more Post-Impressionist style. Anton Mauve, Johannes Bosboom, the Maris brothers, Hendrik Willem Mesdag, and Johan Hendrik Weissenbruch were prominent members of the Hague school.

This group of young Russian artists from the St Petersburg Imperial Academy of Arts traveled throughout Russia, painting people and landscapes. The most prominent landscape artists among them were Ivan Shishkin, Feodor Vasilyev, and Isaac Levitan. Other members of this artist group included Vasily Polenov, Vasily Perov, Nikolai Gay, Ilya Repin, and Vasily Surikov. 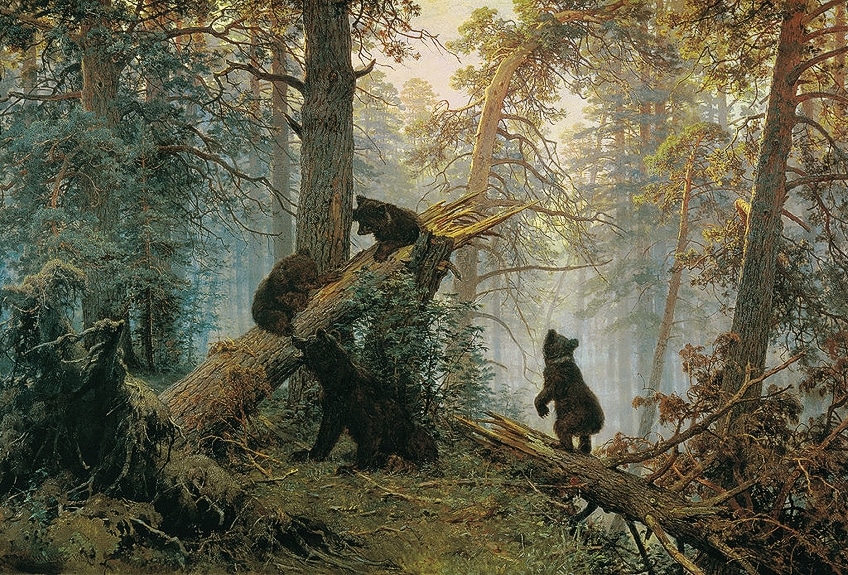 Many of the other features of Impressionist landscapes do not, however, fit with our Naturalism definition. Impressionist painters used a range of non-naturalist colors, and the painterly techniques, including brush strokes, lend the paintings an air of expressionism and atmosphere.

Concerned with the Naturalistic depiction of life and work in the country, the loose-knit group of progressive artists was led by John Lavery and James Guthrie. These leading members were familiar with the Hague school, the Barbizon, Impressionism, and the German Worpswede group.

Set in the stunning Cornish countryside, this group of artists specialized in capturing the landscapes around them. You can see the impressive natural light of Newlyn in the paintings created by these artists who worked directly with the natural world. Stanhope Forbes, Norman Garstin, Frank Bramley, and Walter Langley were leading members of the Newlyn school.

Now that we have explored the theoretical foundations of Naturalism, let us look at some of the most famous Naturalistic paintings. The following paintings were created between 1821 and 1884 and include landscapes and figures.

A perfect example of Naturalist paintings, this work depicts a horse-drawn hay cart crossing a river in front of a stunningly accurate agricultural landscape. Dabbled sunlight floats on top of the river water, interspersed with subtle reflections of the trees and embankment.

In line with the nationalism that often accompanied Naturalistic paintings, this painting represents an area of Suffolk now known as “Constable Country”. The way that the human figure is subtly placed within the natural landscape is typical of Naturalistic artworks. Although en plein air painting was a common practice for many Naturalist artists, Constable completed his paintings in his London studio.

Regardless of where it was painted, this painting is a perfect example of how Naturalist artists presented an informal snapshot of the natural world. The accuracy of the painting subtly communicates the emotive and poetic qualities of the landscape. 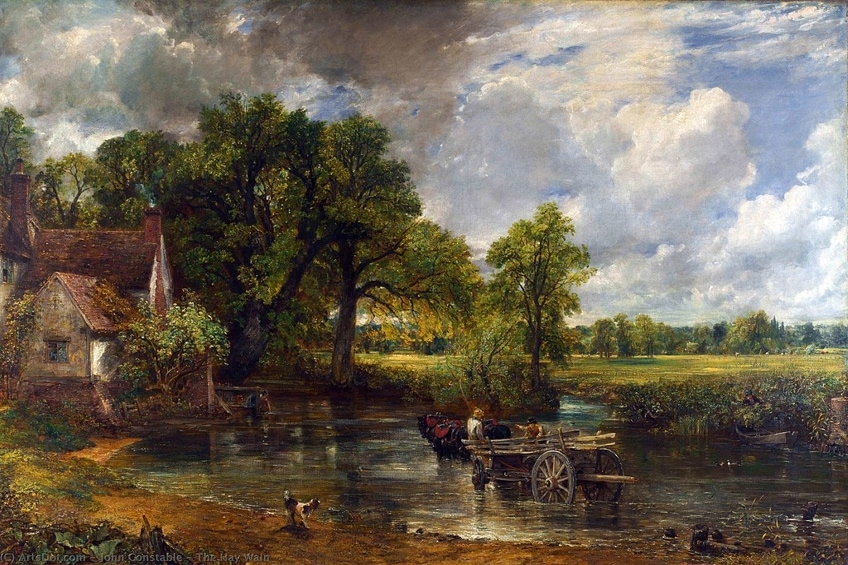 Sunrise in the Catskills (1826) by Thomas Cole

This painting is one of the first by the English-American landscape painter. Finding inspiration in the areas around the Hudson River Valley, Cole was one of the first artists to present these landscapes in the style of European Romanticism. Many regard Cole as the father of the Hudson River school and we cannot overstress his role in developing the Naturalist style.

The painting presents a view of a rocky outcrop bathed in the early morning sunlight. You can see the swirling mist rising from the valleys of the Catskill mountains and catching the sunlight. The dark looming mountains are framed by tangled brush, fallen trees, and jagged rocks. The view we have through this painting is of an untainted American Wilderness. 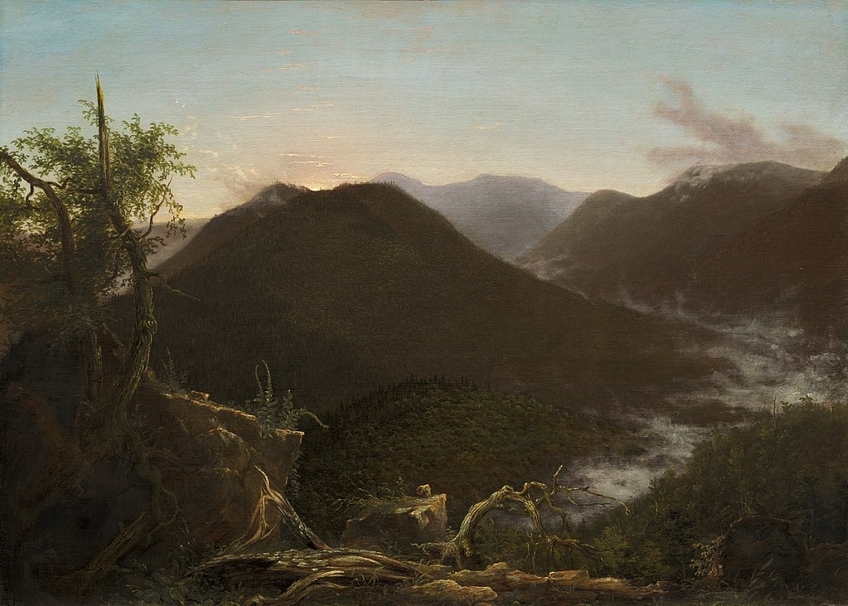 A single reclined figure lies before intimidating oak trees and the embankment of a river. The figure is secondary to the composition of the landscape, which is typical of Naturalistic paintings. The river is highlighted with sunlight, while the large oak trees cast deep shadows across the landscape. The landscape in question is inspired by the countryside surrounding the Barbizon school.

This painting is the outcome of years of oil studies and sketches. Although not completed en Plein air, the extensive preparation allows Corot to capture an incredibly life-like landscape. Many believe Corot’s work represents a transition between Neo-Classicism and Impressionism, and in so doing, he contributed to the Naturalist movement in significant ways.

This Naturalist artwork is the only one on our list that does not focus on the natural landscape. Instead, the human experience is the subject of this Naturalistic painting. The painting presents a religious custom from Brittany where citizens from the surrounding rural villages would proceed around the church begging for forgiveness through prayer. The human figures, although barefooted, are dressed in ceremonial clothes.

Pascal-Adolphe-Jean Dagnan-Bouveret was a Naturalist artist whose favored subjects were often the life of peasants in Brittany. Dagnan-Bouveret placed great emphasis on Naturalistic painting with photographic exactitude. This painting appears to depict a snapshot moment, but was actually the result of studio composition and an artificially crafted tableau. 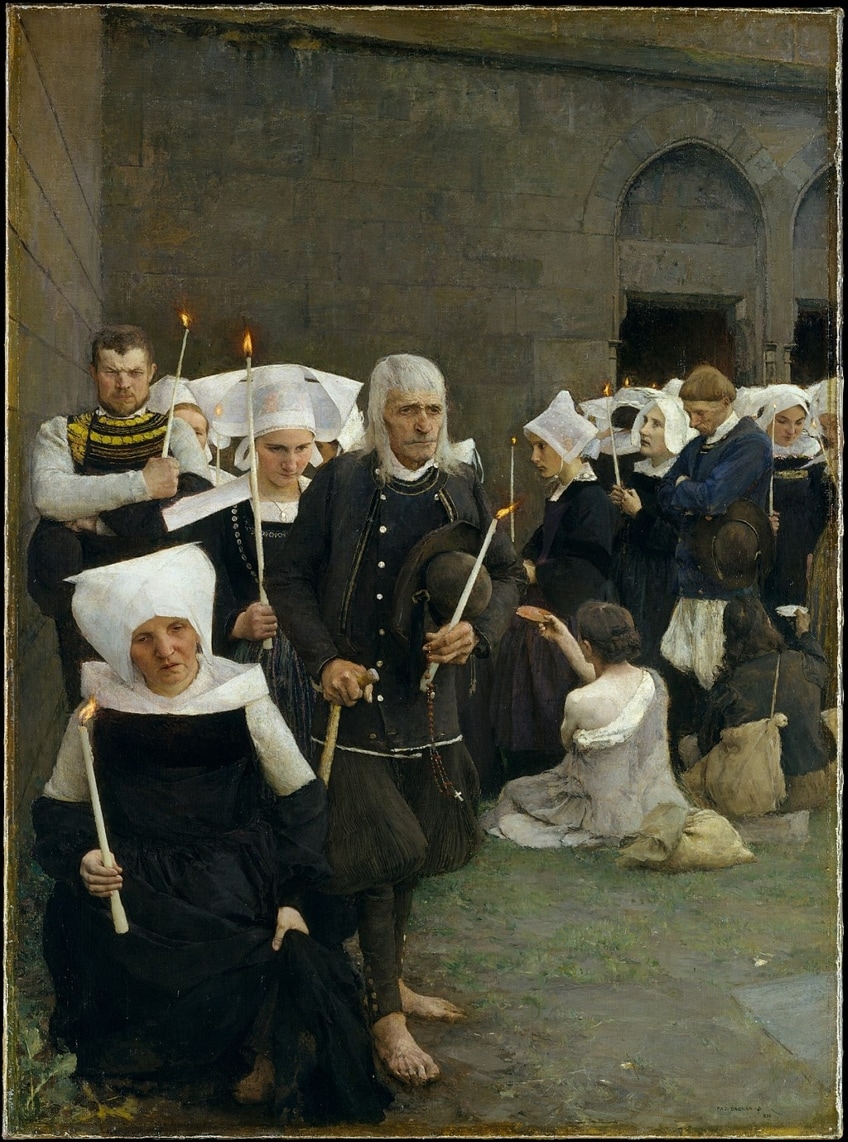 The desire to capture the natural world without the influence of human subjectivity permeates Naturalist paintings. Although landscapes are the most popular subject for Naturalistic artists, portraits and still life compositions also had their place. The history of Naturalism is complex, and not entirely over. The incredible talent and beauty of Naturalist art is undeniable and has profoundly influenced many modern art movements.