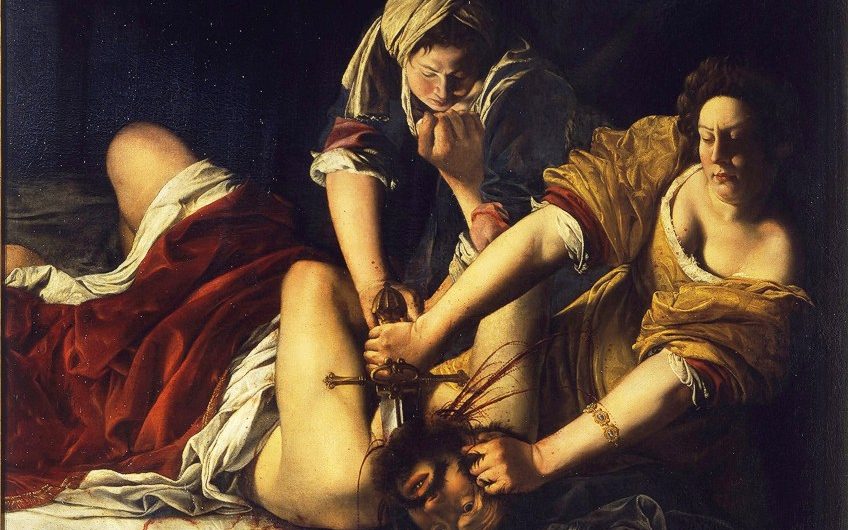 It is one of the most detailed and shocking paintings from the Baroque art period and a testament to a female artist’s skills and talents within the art world mainly occupied by men. In this article, we will discuss Artemisia Gentileschi’s famous painting about Judith beheading Holofernes.

Artist Abstract: Who Was Artemisia Gentileschi?

Artemisia Gentileschi was born on July 8, 1593, and died around 1656. She was born in Rome. Her father was the painter Orazio Gentileschi and her mother was Prudentia Montone, who died when she was a young girl. She learned painting through her father, but her style evolved differently, and she painted more realistically.

Both she and her father were influenced by the art of the Italian painter, Caravaggio. 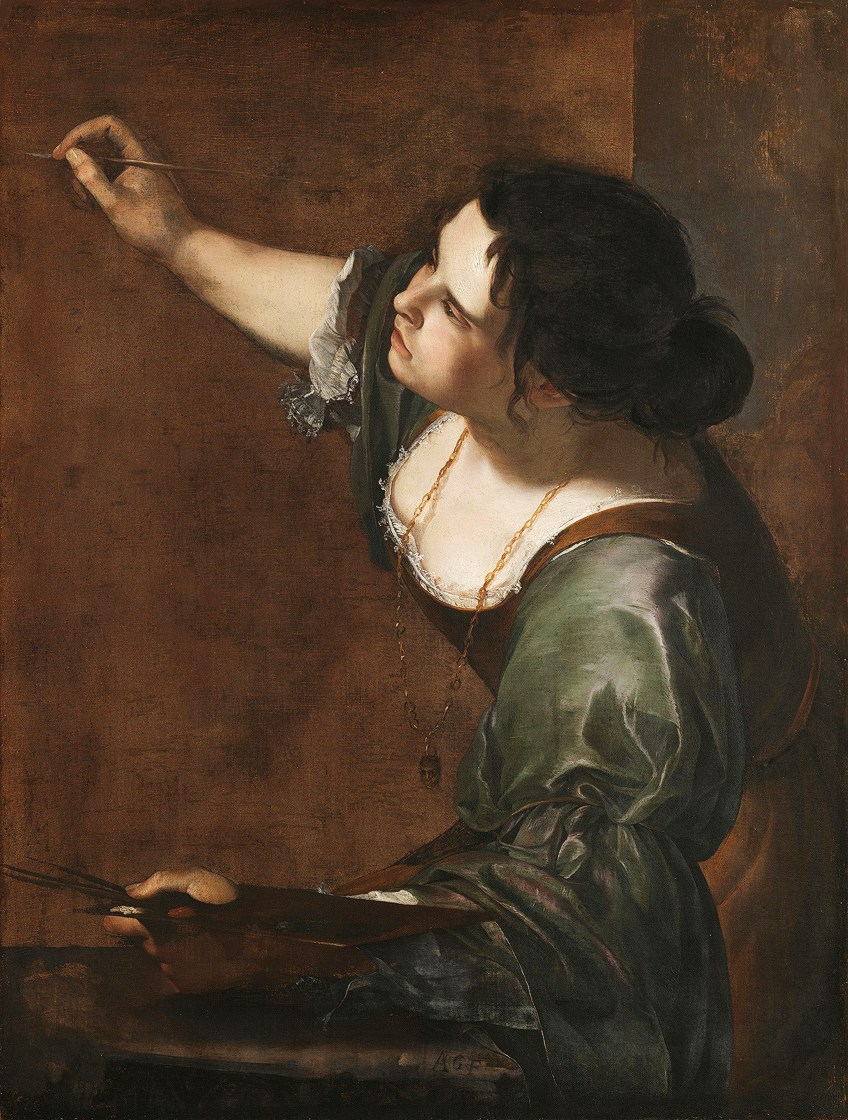 As a young woman, she was raped by the artist Agostino Tassi; the ordeal informed a significant amount of her subject matter around women and power. She was also accepted into the Accademia delle Arti del Disegno (The Academy of Arts and Drawing) as the first woman, and she had various commissions in her lifetime from significant figures like Cosimo II de’ Medici, the Grand Duke of Tuscany. 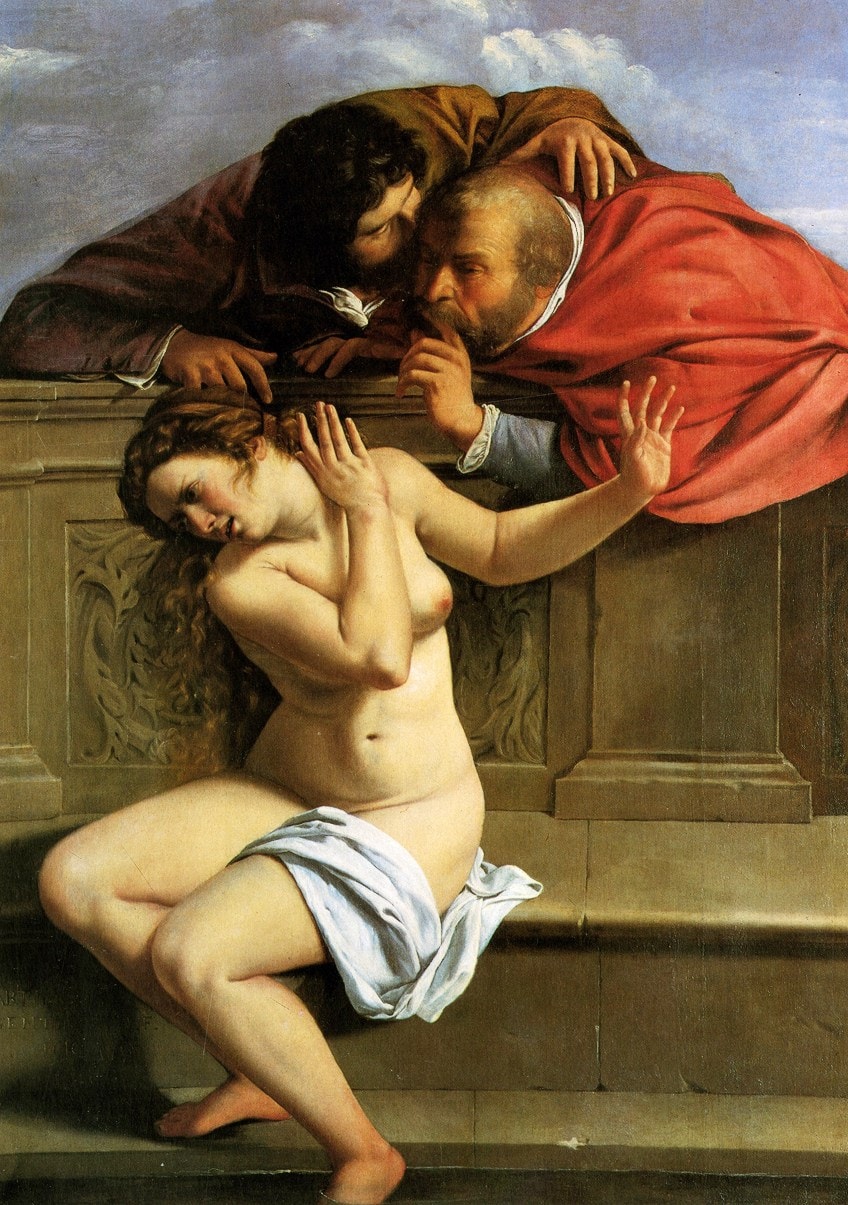 Below we will discuss the oil painting Judith Slaying Holofernes by Artemisia Gentileschi, which is sometimes also titled Judith Beheading Holofernes, in more detail. We will first provide a brief contextual analysis around when and why Gentileschi painted it, as well as more about the Judith and Holofernes story. This will be followed by a formal analysis, looking at the subject matter more closely as well as the stylistic techniques.

Firstly, it is important to note that Artemisia Gentileschi painted two versions of Judith Slaying Holofernes. The first version was painted around 1611 to 1612 and is now housed at the Museo Nazionale di Capodimonte in Naples in Italy. The second version was painted around 1620 and is housed at the Uffizi Gallery in Florence, Italy, and was thought to be commissioned by the Medici family.

However, some believe it may have been given to the family.

The earlier version was painted around the same time when Artemisia Gentileschi was raped by the artist Agostino Tassi. He was reportedly let into her home by her friend Tuzia, who did not help her when she called out for help. 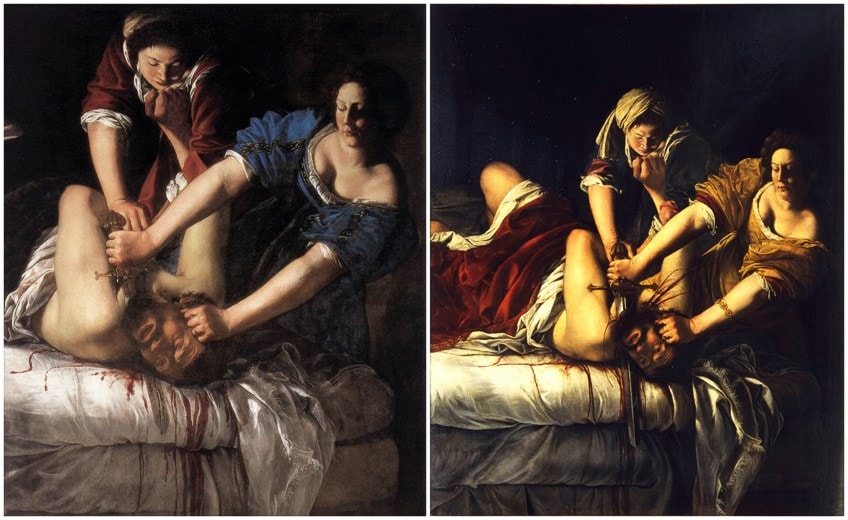 The subject of the Judith Beheading Holofernes relates to the traumatic event that Gentileschi experienced, and some sources have stated that Judith as the main protagonist in the painting is, in fact, a self-portrait of the artist herself.

There have been numerous painted iterations of the Judith and Holofernes story, which was also widely utilized during the Baroque era.

Among these was Caravaggio’s Judith Beheading Holofernes from 1598 to 1599. However, Caravaggio’s portrayal is a stark contrast compared to Gentileschi’s, the latter of whom’s depiction is more dynamic and bloodier, but it is believed that she was influenced by Caravaggio’s version. 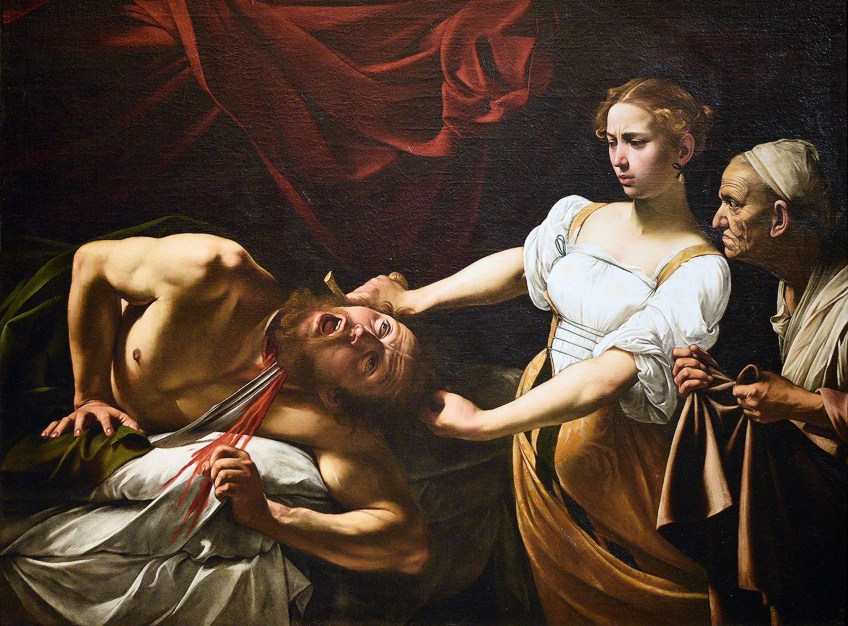 Victory and Seduction: The Judith and Holofernes Story

This leads us to the question of who exactly Judith and Holofernes were, the figures we see portrayed in the painting Judith Slaying Holofernes by Artemisia Gentileschi. The story derives from the Apocryphal (also termed “deuterocanonical”) Book of Judith (c. 2nd to 1st centuries BC), which has remained in the Catholic Bible, but not in the Protestant or Hebrew bibles.

Judith was a widowed Jewish woman and Holofernes was an Assyrian general who invaded Israel, namely Bethulia, the city where Judith lived.

The “town officials” decided to surrender to the Assyrian army after several days, on the condition that God save them, thus testing God. Judith did not agree with the town officials’ plan and that they could not test God in such a way. 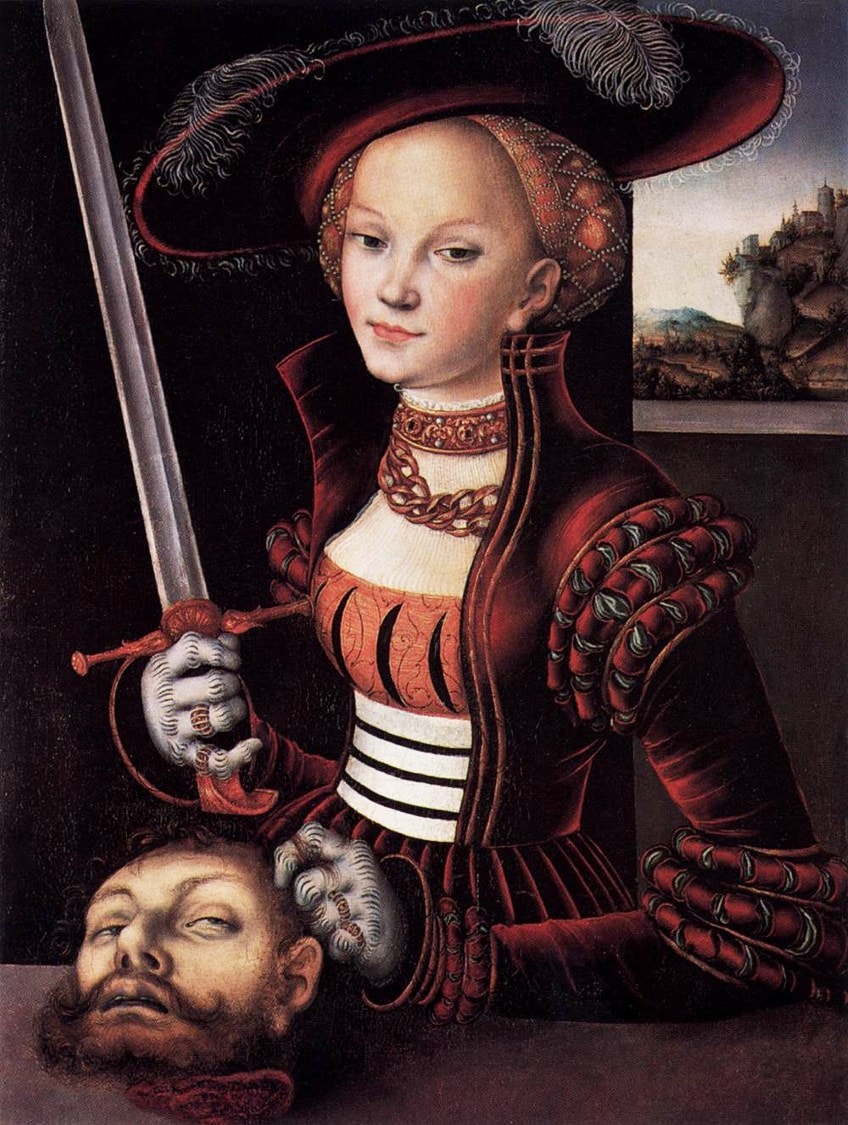 During the night, Judith ordered the town’s men to let her and slave woman Abra leave town. Before she left, she reportedly dressed in beautiful clothing, put on perfumes, and tied a ribbon in her hair; she let her beauty be seen and entered the enemy’s encampment under the pretense of wanting to help Holofernes in his invasion.

According to the Book of Judith, a hundred soldiers were “assigned” to take Judith and her slave woman to Holofernes’s camp. The men were taken aback by Judith’s beauty, and so was Holofernes he met her.  Judith reportedly stayed at the camp for three days, and according to the biblical text, on the fourth day, Holofernes invited her to dine with him so that he could seduce her. After everyone took their leave to their beds, Judith was left with a drunken Holofernes.

She cut off his head with his own sword, and with Holofernes’s head, Judith and her slave woman fled the scene back to their city of Bethulia to give the news to their people and let them know that God used her to “destroy” their enemies.

Both versions of Judith Slaying Holofernes by Artemisia Gentileschi have stylistic differences. The later version (from around 1620) has been described as having more realism and detail, notably evident by the blood spraying from Holofernes’s neck. For this article, we will discuss this later version in more detail below. 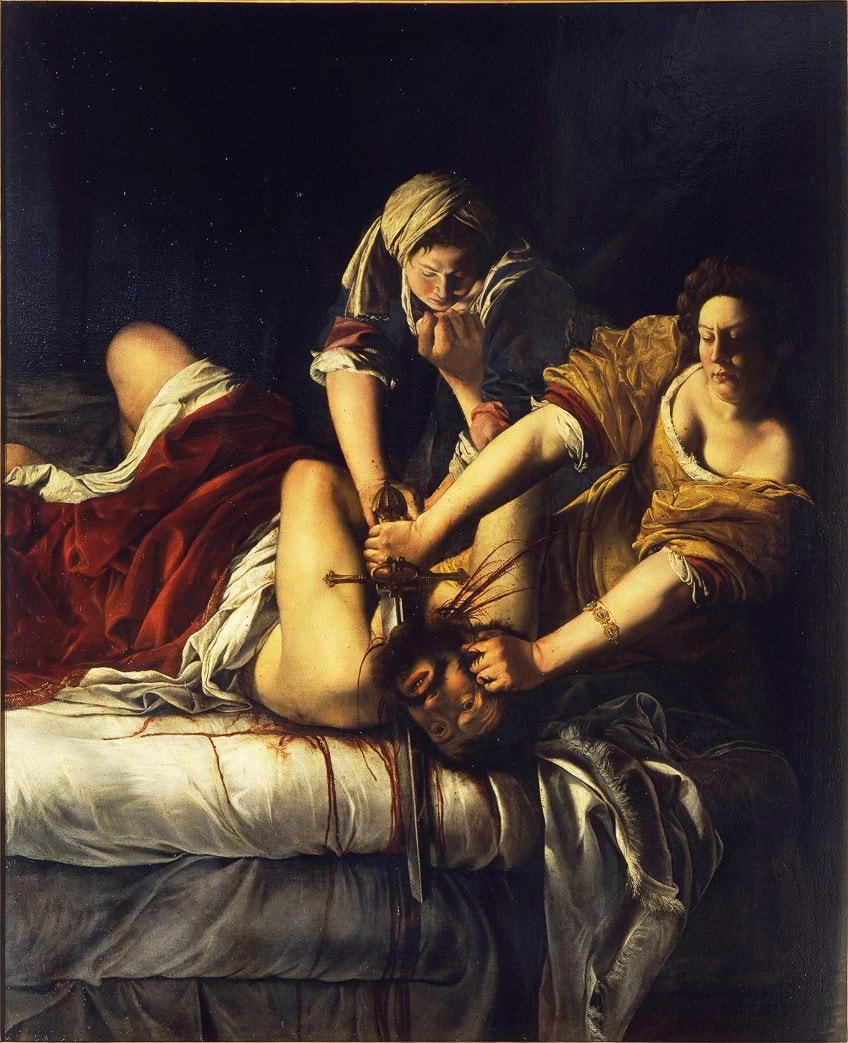 The scene is set and we, the viewers, become part of the moment just before Judith and her slave woman behead the Assyrian general Holofernes. Judith slices the sword through his neck without a wince at the blood and undoubted gutsiness it takes to behead someone.

Gentileschi echoes her protagonist’s seeming surety by not holding back on how she tells the story.

To the right of the composition is Judith: She is wearing a golden-colored dress and her hair is held up in braids. She leans to her left side (our right) while in the vigorous act of beheading. If we look at Judith and the head of Holofernes, her left hand is on the side of his face and her fingers appear to be gripping onto his hair (we can see his hair through her fingers) in order to keep his head steady while she grips the sword in her right hand and twists her wrist to slice his neck. 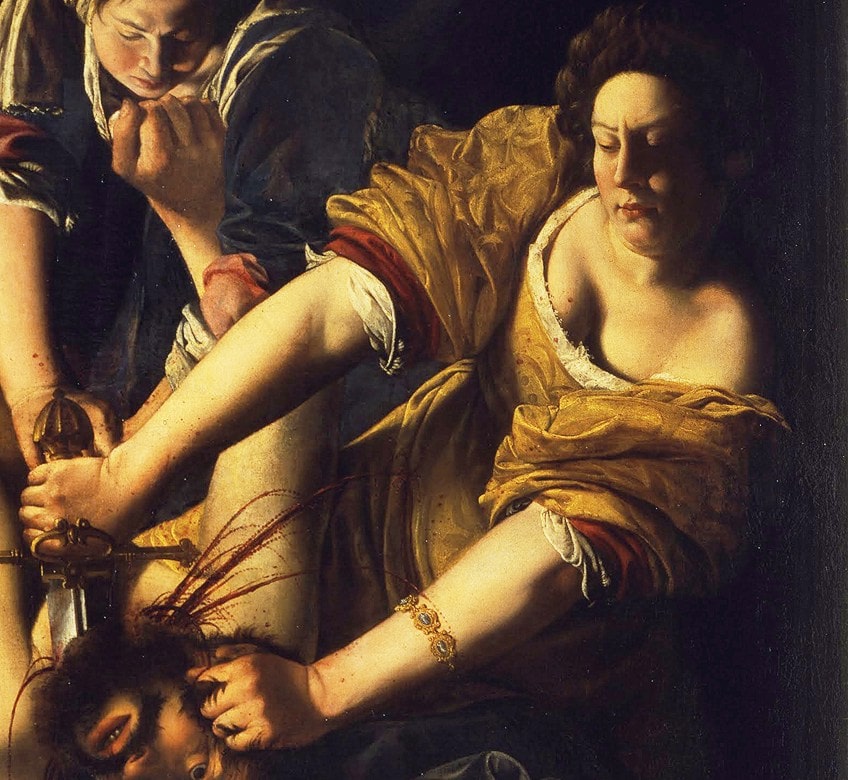 To Judith’s right (our left) and slightly further into the background, is her slave woman, Abra, who is depicted as a young woman. She is wearing a dark blue dress and her hair is held up in a white head wrap. She is facing downwards towards the dying Holofernes, whose right arm is lifted as he struggles; his semi-clenched hand is just below her chin.

She has both her hands on his body to hold him down. 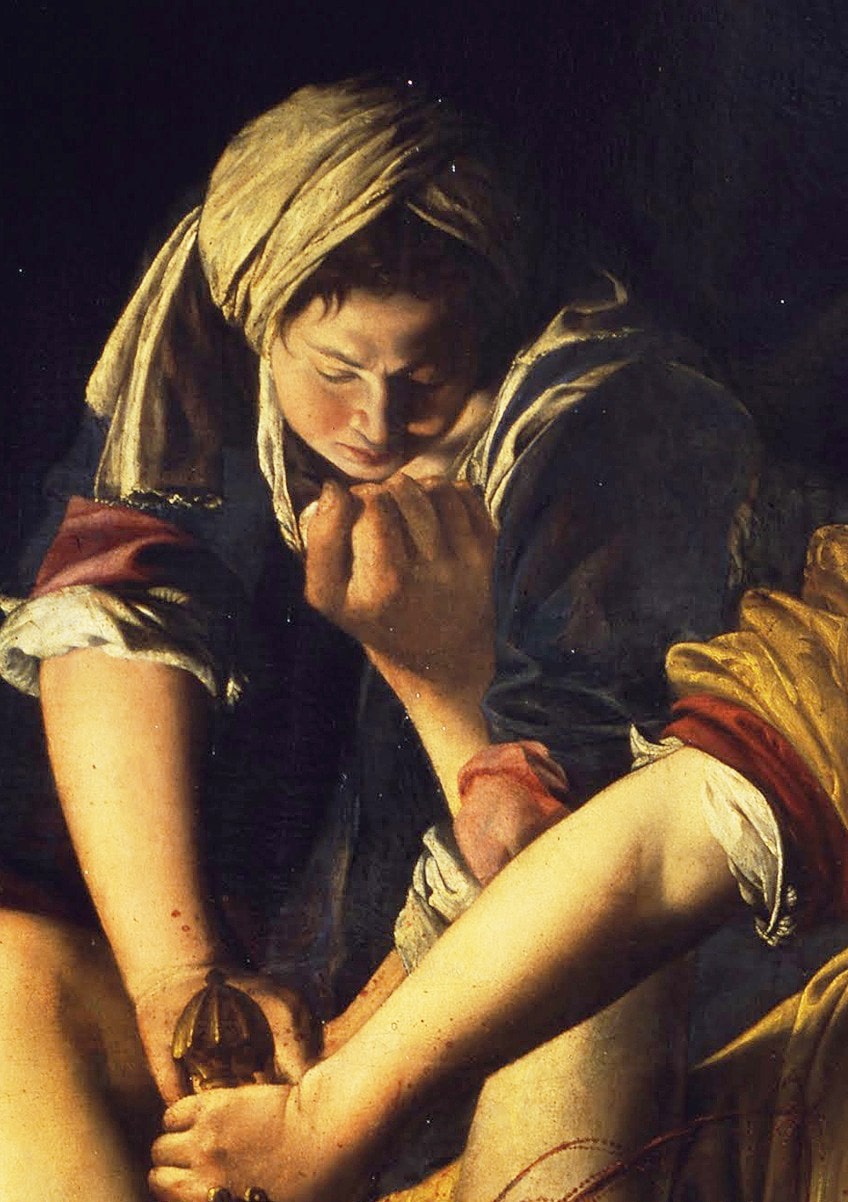 Holofernes is lying on a bed with white sheets and a red velvet blanket and a white sheet over his body. His head is turned towards us, the viewers, and hangs nearly over the edge of the bed in the foreground of the composition.

The long blade of the sword is under his chin and faces downwards to the right of his head (our left). 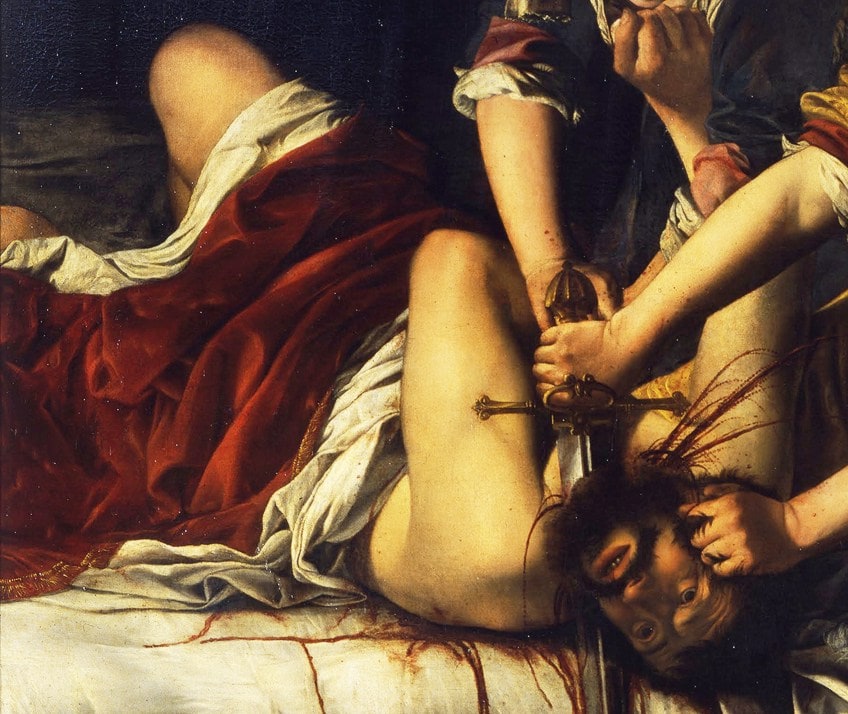 Here, several streams of blood – almost like extensions of the sword’s blade – trail further down the bed onto the floor, which is out of the compositional view. There is also blood spraying from Holofernes’s neck and staining the sheets underneath his bare shoulder area.

Additionally, an important motif to mention is Judith’s armband around her left arm, which depicts Artemis, the Greek goddess of the hunt and chastity, among other traits. It is believed that Gentileschi depicted this as her way of identifying with the main protagonist. 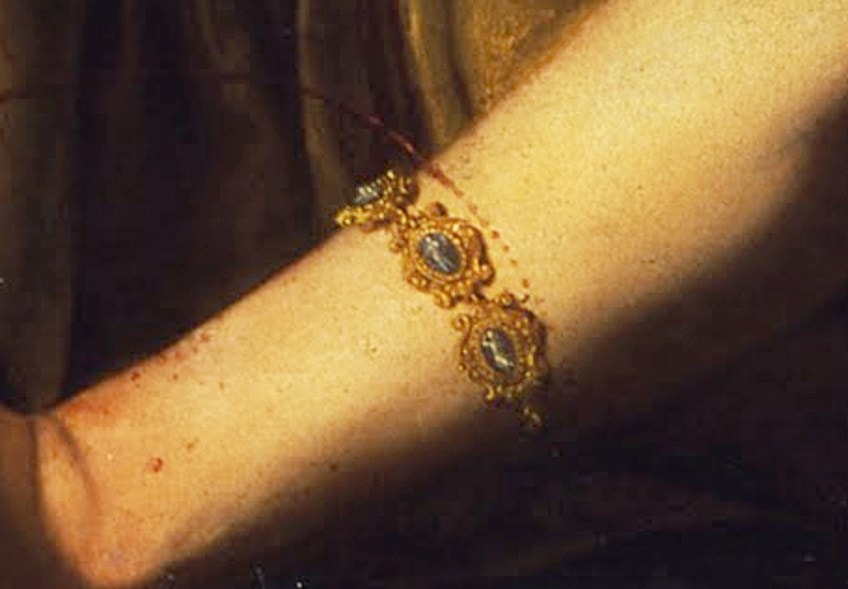 Artemisia Gentileschi was influenced by the artist Caravaggio and how he utilized color, especially the technique of chiaroscuro, which focuses on contrasts of dark and light. In terms of art elements, these contrasts of color value also create a dramatic effect on the subject matter, heightening the realism. In Judith Slaying Holofernes, the background is darker than the figures in the forefront, who all appear highlighted as if by a spotlight, which is out of our view and is causing stark shadows.

As much as the figures appear lighter in skin tone by this light source, there is an equal shadow cast, thus emphasizing the dramatism.

For example, the women’s faces are half lit up and the other half darkly shaded. This contrast is also evident in Judith’s arms. Furthermore, the figures are portrayed in three primary colors, namely Judith’s golden/yellow dress, Abra’s (Judith’s slave woman) blue dress, and Holofernes’s red blanket over his body. These colors create a variation against the dark background, but neutral hues are created from the skin tones and bed sheets. 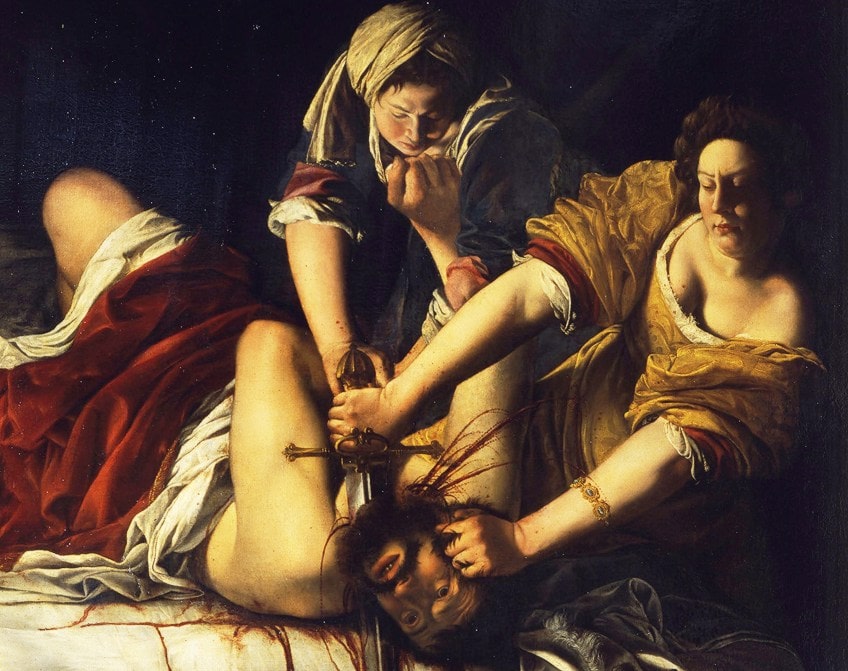 There are various implied textures in Judith Slaying Holofernes, such as the velvet texture of the red blanket over Holofernes as well as part of the bed sheets that appear to be velvet too. The women’s dresses appear as soft and silky material and we can see a textured pattern on Judith’s dress. All three figures have smooth skin tones; the women appear more voluptuous, and Holofernes has a more muscular definition.

Contrasting the softer textures is the hard metal from the sword – its metallic color is also like the grayish color of the bedsheets, which emphasizes the hard and soft textures. 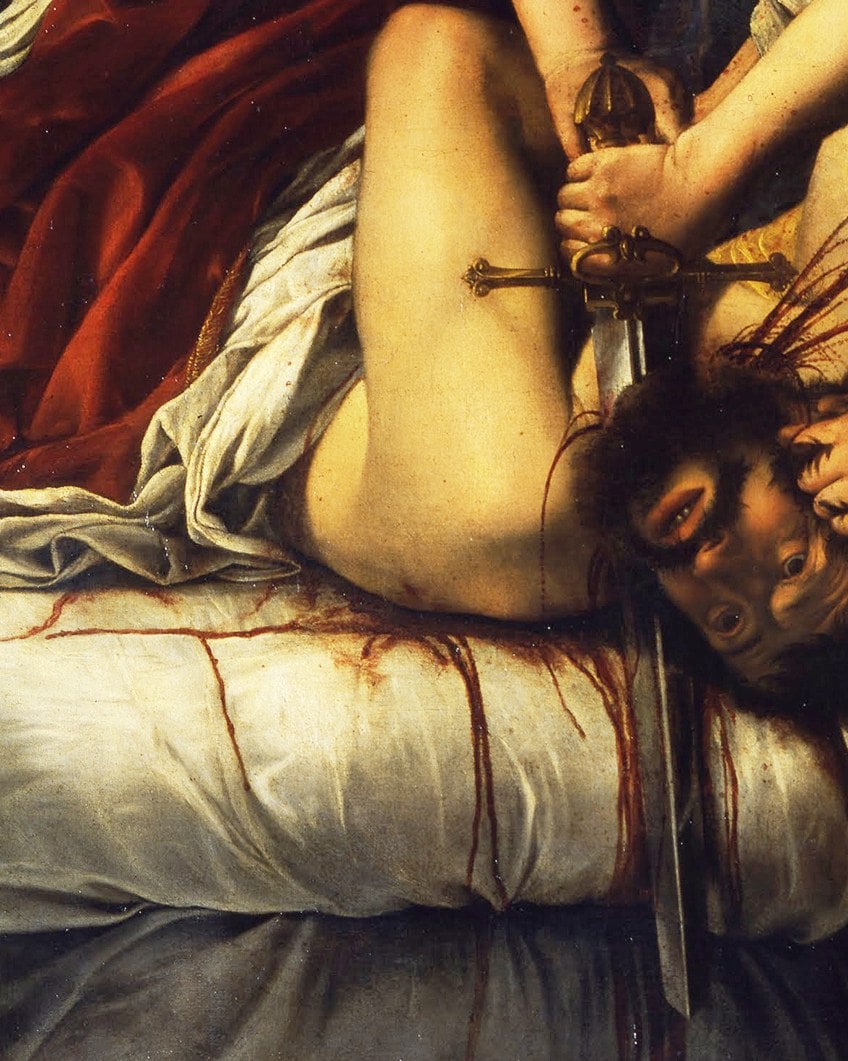 There is a dominance of diagonal lines created by the figures’ outstretched arms as well as Holofernes’s lifted right knee. These lines are referred to as “directional lines”, which lead our gaze to the focal point of Judith and the head of Holofernes.

These lines also create a sense of movement or rhythm, further emphasizing the action taking place. 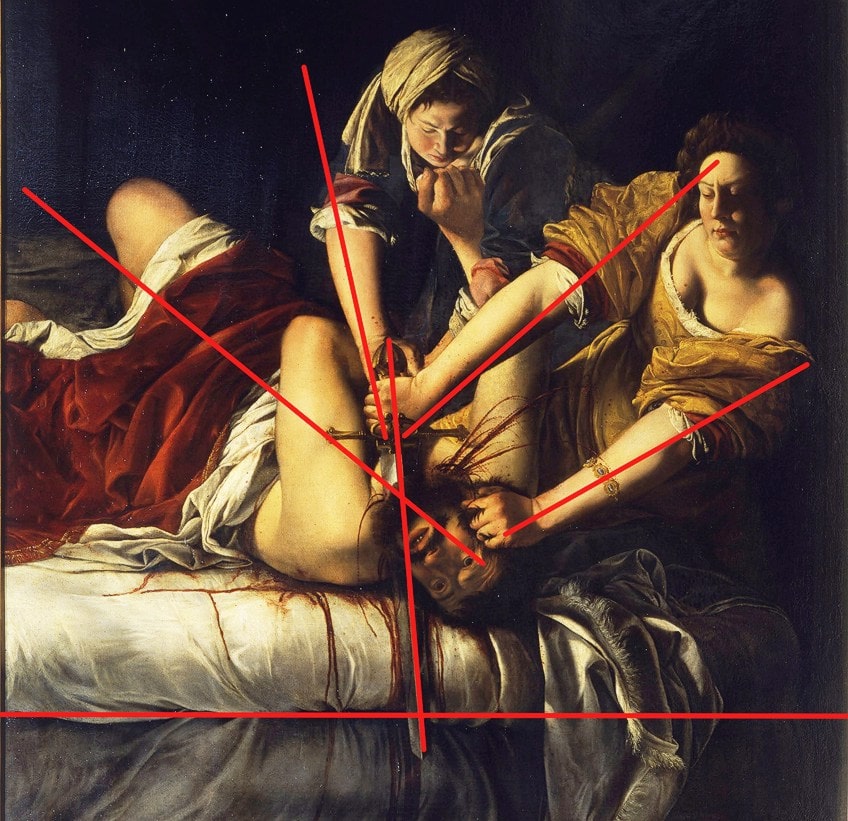 Artemisia Gentileschi’s composition consists mainly of organic shapes and forms, namely the natural curves and lines visible from the figures’ body shapes as well as the bedding. Furthermore, the figures’ arms and the mattresses from the bed appear cylindrical.

The sword provides a more geometric and elongated shape. 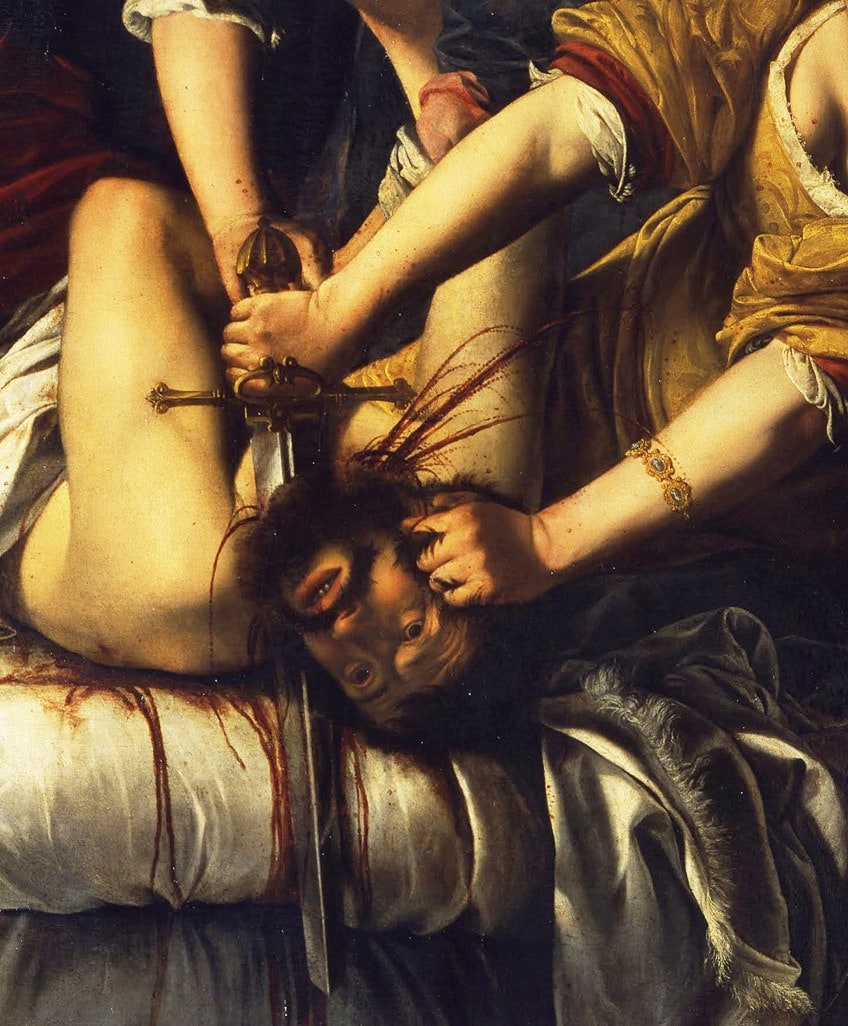 Artemisia Gentileschi highlights the dramatism of Judith beheading Holofernes by placing the figures directly in front of us, the viewers. The dark background serves almost like a backdrop effect, placing all the focus on what is taking place in the foreground. The foreground becomes the positive space and the background acts as the negative space.

Additionally, depth is created by the contrasting dark and light. 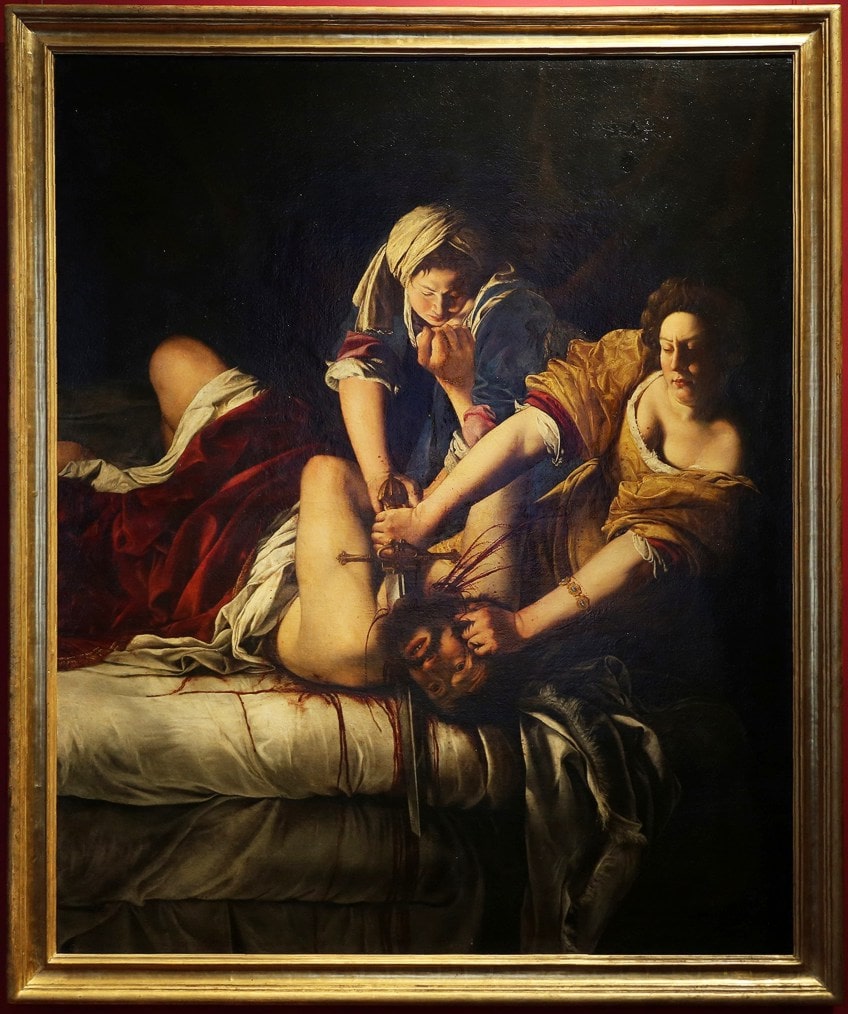 Artemisia Gentileschi was one of the leading female artists of the Baroque art movement and is remembered as one of the most successful too. Her paintings depicted scenes of women who have been described as “heroines”, who embodied qualities of strength and bravery. Her prowess has influenced modern-day female scholars and artists like Linda Nochlin and Judy Chicago. She has also been referenced in numerous films, books, and television series.

“Gutsy” is a word utilized often when describing Artemisia Gentileschi’s style of depicting women, and as much as she portrayed these types of women, they became reflections of the artist herself. She was the heroin of her own life, a woman who walked amongst the patriarchal power structures of 17th-century European society.

Judith Slaying Holofernes (c. 1620) was painted by Artemisia Gentileschi. She was one of the leading Baroque female painters who depicted a heightened sense of realism in her compositions. She portrayed narratives that explored the dynamics between men and women, as well as the power over women, but equally their triumph over it.

What Is the Location of Judith Slaying Holofernes by Artemisia Gentileschi?

Judith Slaying Holofernes has been housed at the Uffizi Gallery in Florence, Italy since about its creation in 1620. There is also an earlier version that Artemisia Gentileschi painted around 1611 to 1612, which is housed at the Museo Nazionale di Capodimonte in Naples in Italy.

What Is the Judith Slaying Holofernes Meaning?

Judith Slaying Holofernes (c. 1620) explores the theme of women and their strength, and how they overcome the power that men assert over them. The Judith and Holofernes story is also believed to refer to Artemisia Gentileschi’s identification with the trauma she experienced from being raped when she was younger.