Adam and Eve art comprise one of the most common themes in art history; there are hundreds of Adam and Eve painting examples, each one portraying this famous Biblical scene in its own uniqueness. In this article, we look at the Adam and Eve (1504) print engraving by the Northern Renaissance artist Albrecht Dürer.

Artist Abstract: Who Was Albrecht Dürer?

Albrecht Dürer was born on May 21, 1471, and died on April 6, 1528. He was born in Nuremberg in Germany and became one of the leading artists of the Northern Renaissance. His father was Albrecht Dürer the Elder, and his mother was Barbara Holper, they reportedly had 18 children, of which Dürer was their third born. 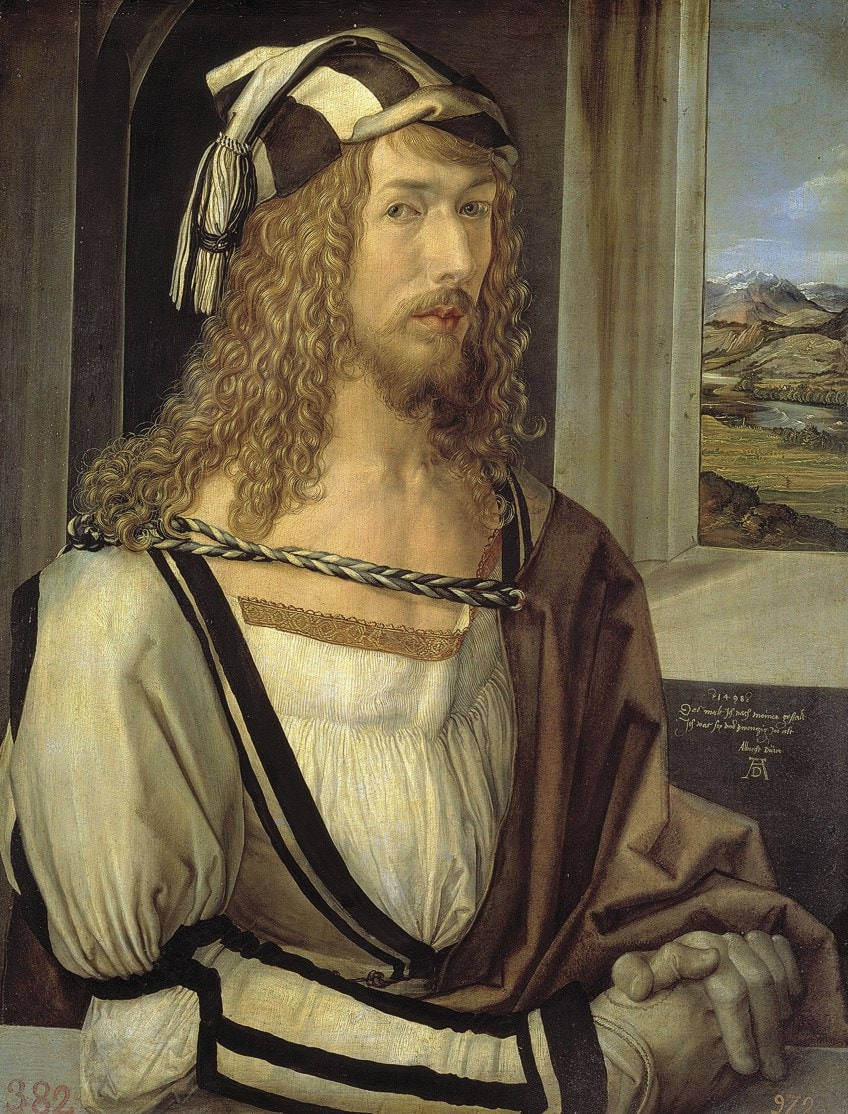 He developed as an artist from an early age, apprenticing for his father as a draughtsman. From 1486 to around 1489, he studied further under Michael Wolgemut. He also traveled to Italy during the 1490s, which is where he learned Italian Renaissance painting techniques. Similarly, his art style using printmaking influenced other great artists from the Italian Renaissance, for example, Titian and Raphael.

Dürer was well-known for his woodcut prints and produced several important pieces throughout his art career and became one of the most prominent artists who traversed the Italian and Northern Renaissance painting styles.

Adam and Eve (1504) by Albrecht Dürer in Context

Below, we will discuss the engraving of Adam and Eve by Albrecht Dürer, starting with a brief contextual analysis of Dürer’s engravings and the medium itself during a burgeoning time in 16th-century Europe, as well as the reasons as to why he created this engraving. This will be followed by a formal analysis discussing its subject matter and the inherent symbolism as well as Dürer’s stylistic approach and how he emphasized certain art elements to create a unified composition.

He trained in the engraving technique from an early age, producing over a hundred engravings, but he was also skilled at other art modalities like watercolor, painting, and drawing.

We will find the similar Biblical subject matter in his later Adam and Eve oil-on-panel painting from 1507, which is located at the Museo del Prado in Madrid. In this Renaissance painting, we see the familiar snake in the tree and Eve holding a piece of fruit in her hand, its branch in the snake’s mouth. 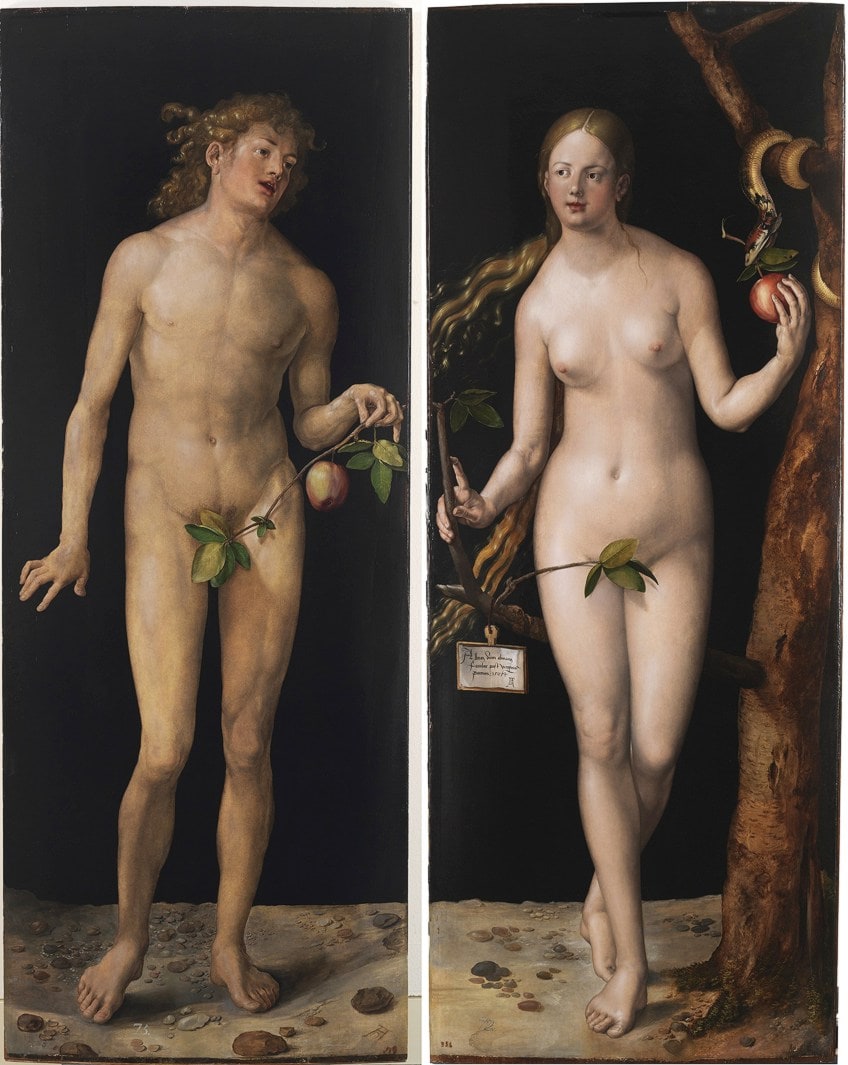 Furthermore, Dürer was an avid student as much as a master of the arts and published several theoretical books about his studies on human proportion. These were the “Four Books of Measurement”, or Underweysung der Messung mit dem Zirckel und Richtscheyt (1525) and the “Four Books of Human Proportion”, or Vier Bücher von Menschlicher Proportion (1528).

These books were published only later in Dürer’s life, but he wrote them a few years earlier.

Engravings were a large part of Dürer’s artistic career, and it is believed that he was copied by other artists too, namely Marcantonio Raimondi, who was an Italian engraver. Dürer reported his copies to the Venetian Government as well as the use of his monogram, which, according to various art sources, became one of the earliest intellectual property cases.

It is important to note the reasons why Albrecht Dürer created this famous Adam and Eve engraving, of which there are several. If we are unfamiliar with his art career, we might just think this is another Adam and Even art example; however, Dürer utilized a Biblical narrative to demonstrate his skill and knowledge of classical techniques and the study of human proportions espoused by the theories of Vitruvius, who was an ancient Roman architect who lived in the 1st century BC. Dürer was reportedly also inspired by the Venus de Medici (c. 1st century BC) and Apollo Belvedere (c. 120-140 AD) sculptures from Greek antiquity.

Furthermore, he not only utilized the Adam and Eve art theme but also incorporated elements from his own Germanic origins, notably the landscape in which he placed the two Biblical figures, being a German forest. 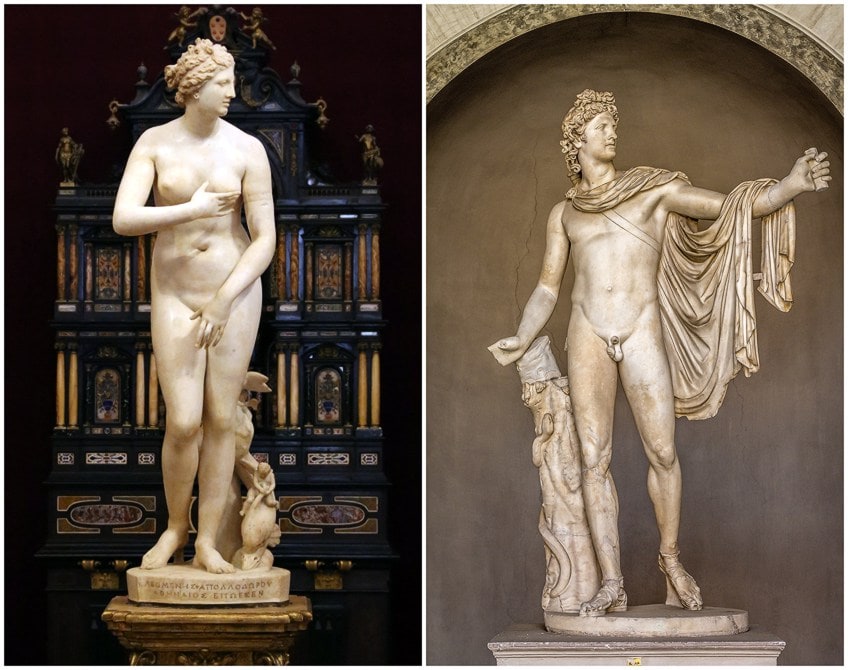 Dürer created an engraving utilizing a Biblical theme that was a demonstration of his skills and know-how about classical proportions and ideals and a testament to his lineage as a German Renaissance artist, but some art sources state that this was to attract commissions, using the engraving as an example of his artistic abilities and knowledge about Italian art when he traveled to Italy.

Below, we will look more closely at the Adam and Eve engraving, starting with a visual description of the subject matter and what some of the symbols allude to. It will come as no surprise that Dürer was indeed masterful in his ability to portray artistic elements like color and texture through the engraving medium. 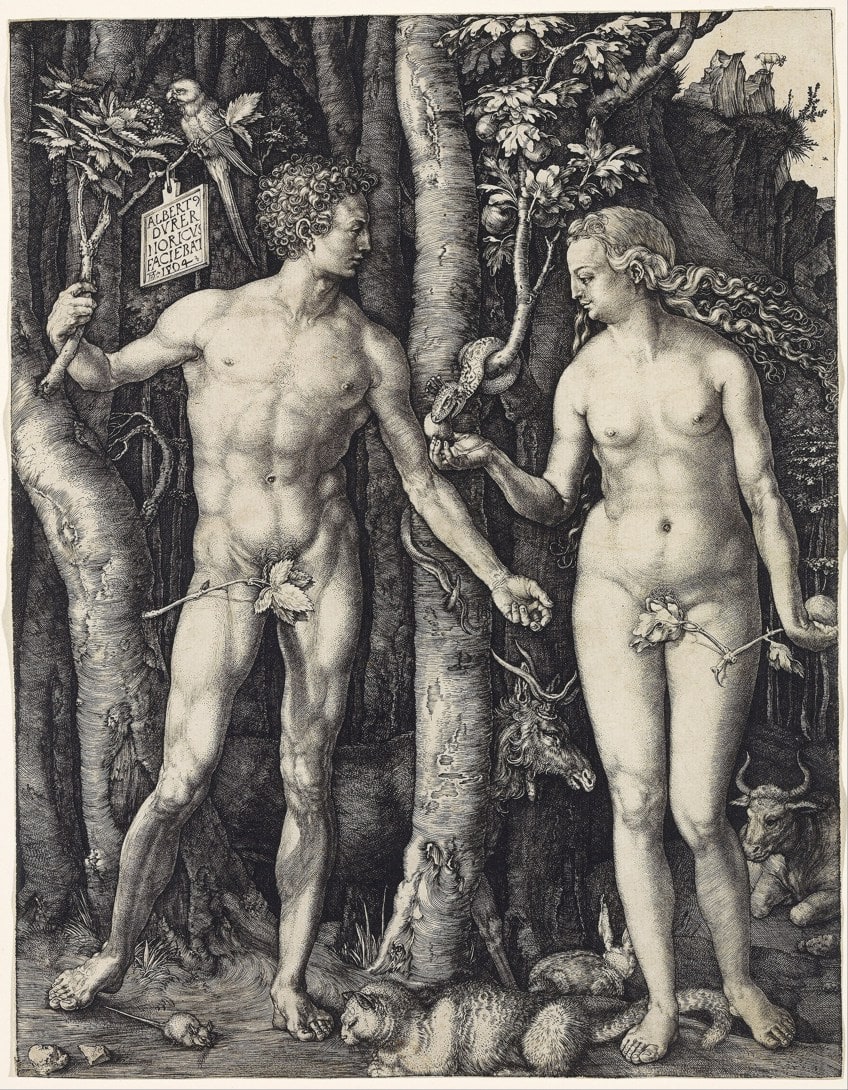 The Albrecht Dürer Adam and Eve engraving depicts Adam standing on the left and Eve on the right. Both figures are nude with only leaves covering their genital areas. Adam is holding a mountain ash tree branch, which symbolizes the Tree of Life, in his right hand (our left side) and he gazes towards Eve, his left arm extended towards her.

There is also a sign, or plaque, hanging from the branch in Adam’s hand, which reads as follows, “ALBERT DVRER 9 NORICVS FACIEBAT 1504”. This has been widely translated from its Latin as, “Albrecht Dürer of Nuremberg made this in 1504”. 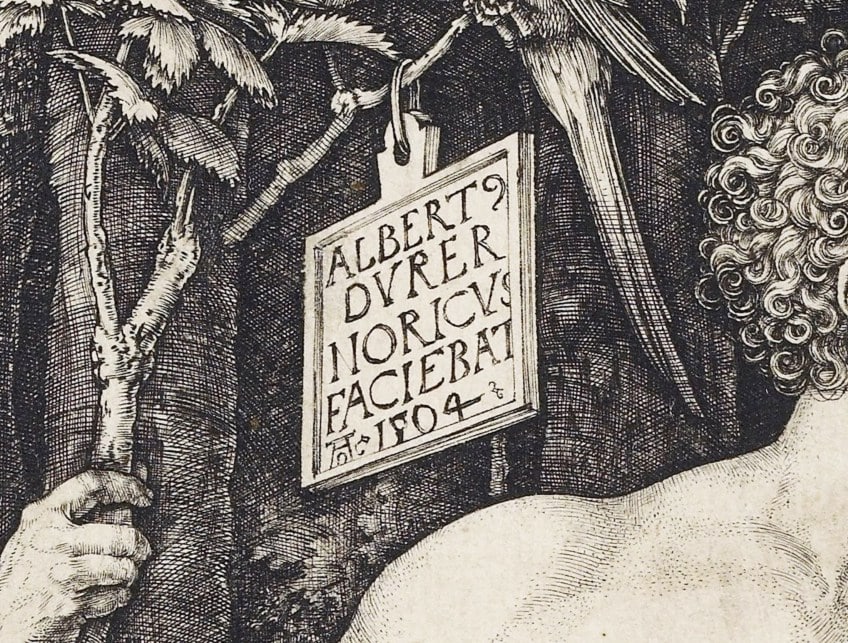 Eve is holding a smaller branch with a fig still attached to it in her left hand (our right side) and in her right hand, there appears to be a piece of fruit, which she is holding up to a snake intertwined in the tree in between her and Adam. There are four nails on the top of the snake’s head and the bottom of its tail appears to be clasped by either another nail in the tree or a small, rounded, root or branch attached to the tree.

This tree is thought to be the Tree of Knowledge. 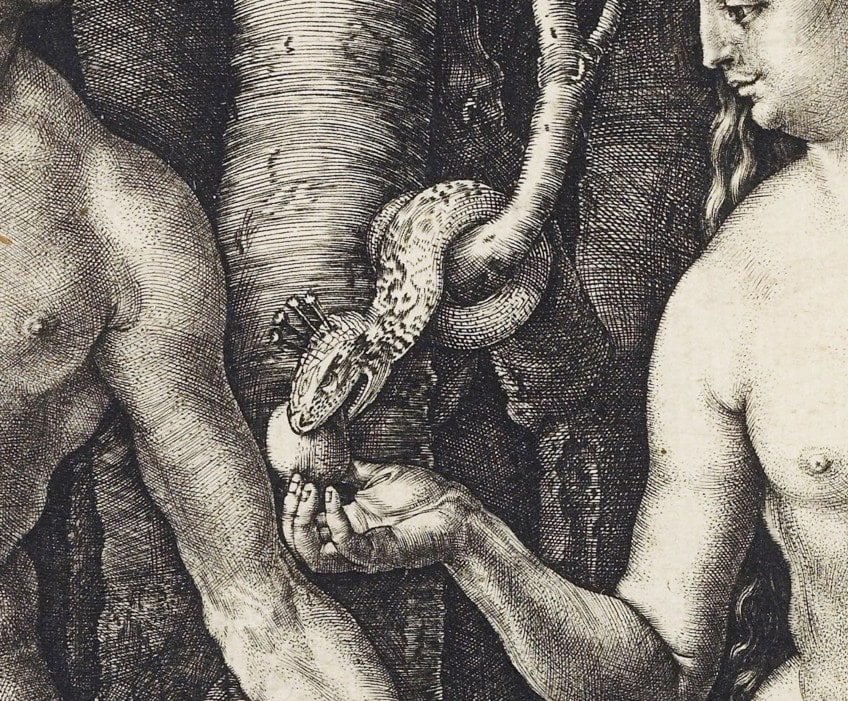 The two figures are not surrounded by the expected Garden of Eden, but instead, there is a thick forest behind them, which begins to open in the background to the right-hand side of the composition giving a view of the distant cliff, on which a goat stands atop the uppermost craggy rock of the cliff.

There are other animals throughout the composition, totaling eight. 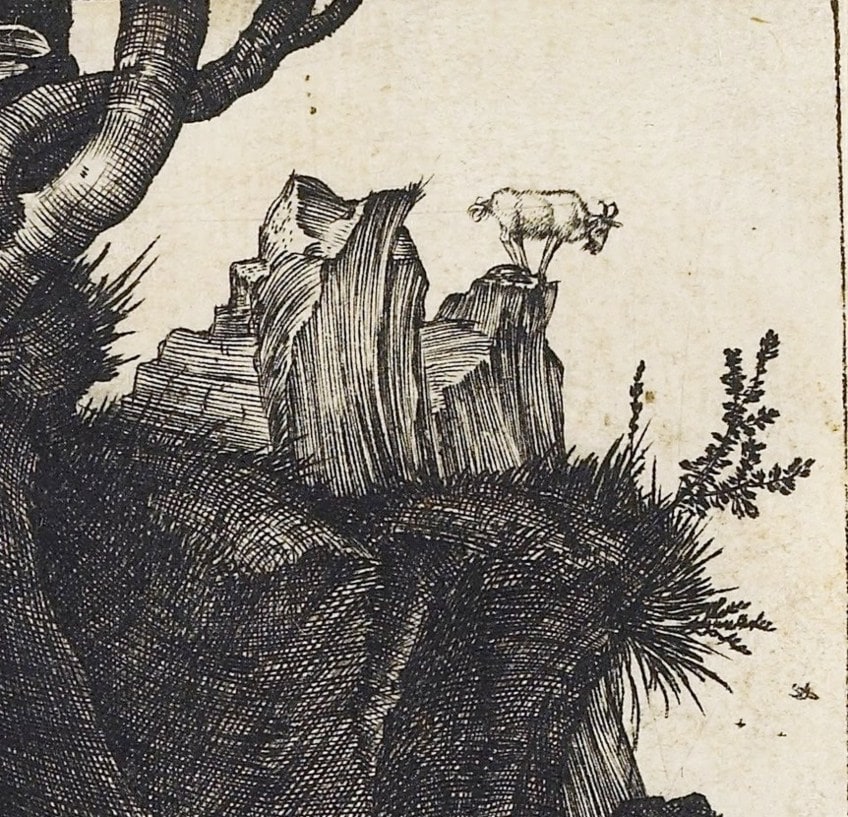 These are, namely, the snake and goat mentioned above, a parrot perched atop the branch in Adam’s hand, the elk in-between the tree branches, the ox lying in the background, the cat in the foreground, the rabbit just behind the cat, and the mouse in the foreground between Adam’s feet.

These Albrecht Dürer Adam and Eve figures stand in the classical contrapposto stance. This is a typical stylistic stance we will see in ancient Greek statues, which is also typical of the Renaissance painting collections.

The term means “counterpose”, and it is usually distinguishable by how the hips are slightly lifted due to the figure standing with his/her weight on one leg. 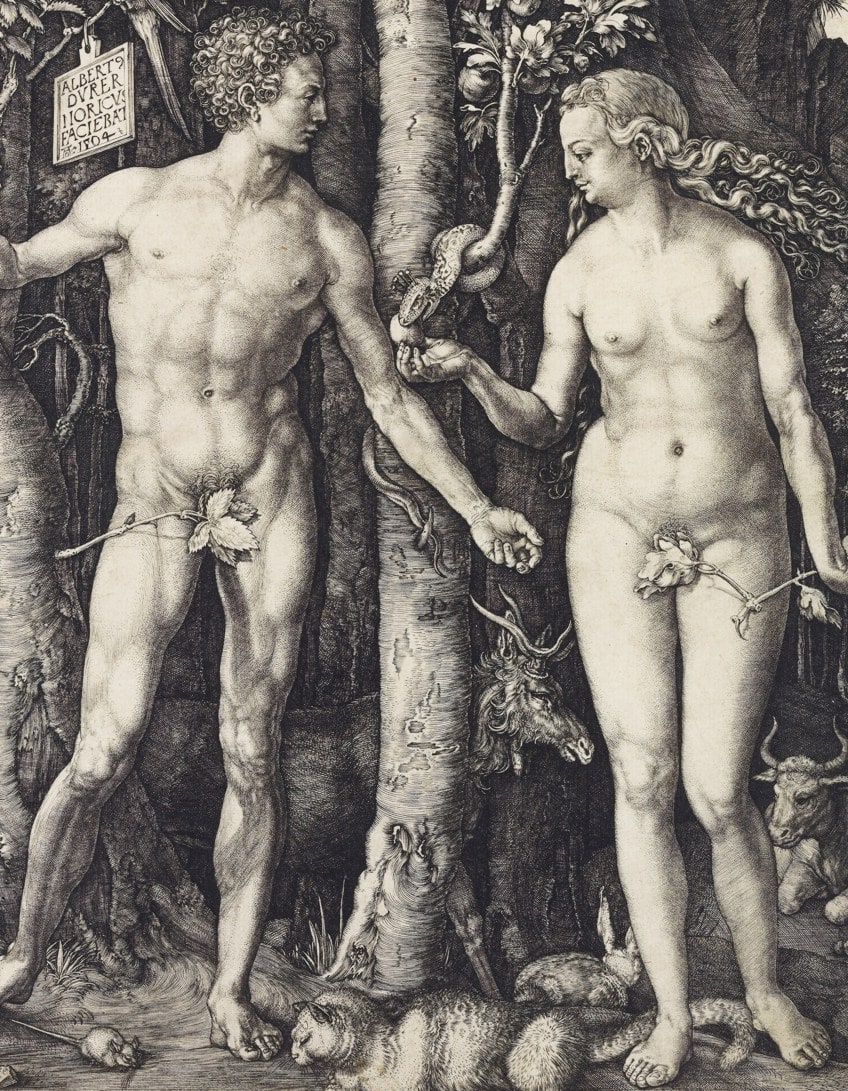 Dürer incorporated several symbols in this engraving, most notably conveyed through the animals and the types of trees utilized, all of which refer to the Biblical narratives related to the Fall of Man and Adam and Eve.

Some art sources describe the symbolism as divisionary, exemplified by the central Tree of Knowledge between Adam and Eve.

Furthermore, it is believed that Dürer’s inclusion of the four animals, the cat, rabbit, elk, and ox, represents the four humors, which were based on ancient medicinal theories related to the human body and the four major fluids from specific organs. These in turn represented different personalities or temperaments. The term “humor” originates from Latin, meaning “fluid” or “liquid”. 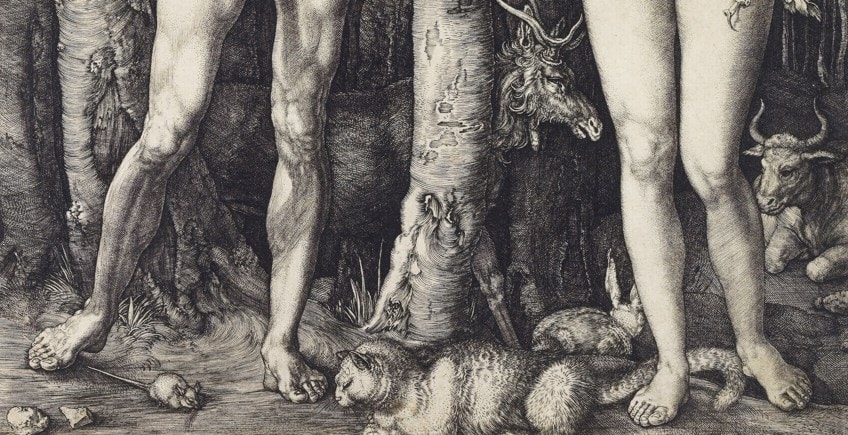 The parrot symbolizes the Virgin Mary, noted by its sound, which has been described as reminiscent of the “Ave Maria” prayer. Furthermore, the snake in the tree represents the idea of evil, and the mouse has been attributed with ideas of “male weakness”.

In this Adam and Eve engraving, color is conveyed through the means of shading, which shows lighter and darker areas, similarly providing contrast. The foreground appears lighter in color, notably on the figures’ bodies, as if there is an unknown light source highlighting them. Eve appears lighter in skin tone than Adam, which can possibly highlight her femininity and his masculinity. The forested area in the background appears darker and is almost completely shaded. 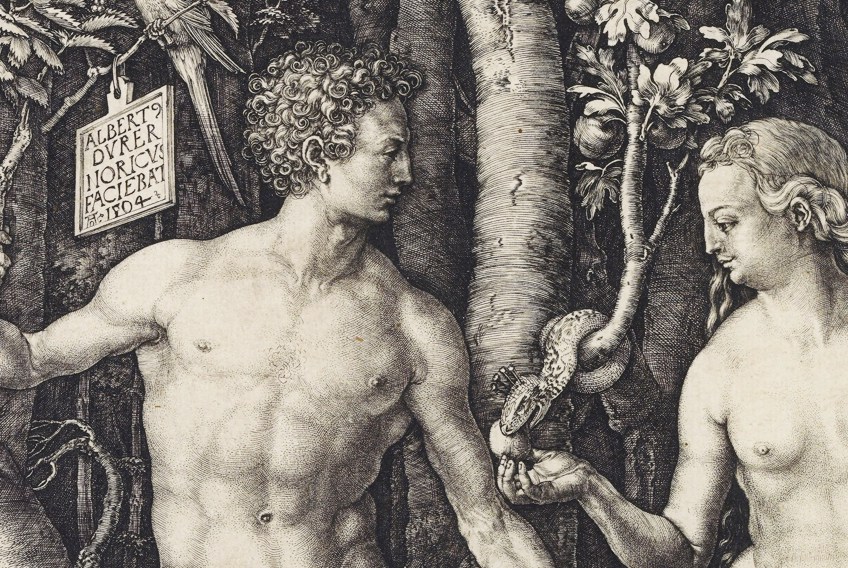 Dürer’s engraving is created through the meticulous and masterful application of hundreds of lines. Some are horizontal, vertical, and curved, all indicating implied texture. Examples include the curved lines denoting the hairs on Adam’s chest and head, as well as Eve’s long locks of hair, the patterns on the snake’s body, the fur on all the animals, which appear different for each species, the rocks and cliff edges, as well as the trees and branches. 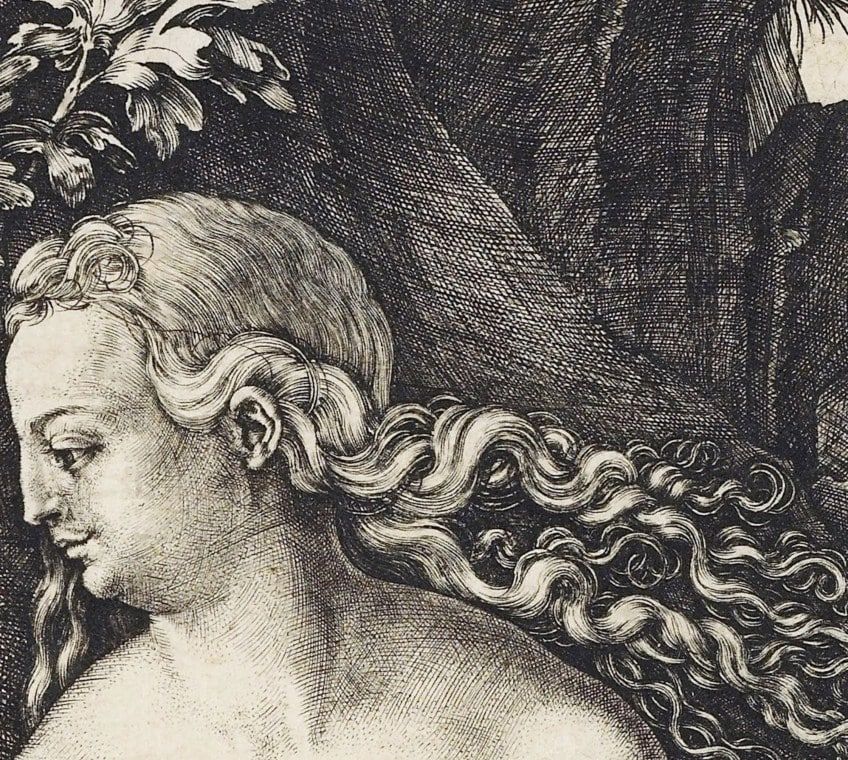 If we look at the composition, there is a strong focus on horizontal forms and shapes, from the tall trees in the background to the standing postures of Adam and Eve.

This is slightly broken by the animals lying on the ground here and there, resulting in a contrasting effect.

Space is created through depth and perspective; from the foreground the figures appear larger and more in our space, whereas the background is smaller in scale, exemplified by the goat in the distance. We are also given more information here about the landscape, which appears to be a densely forested area that opens to a possible mountainous region too. 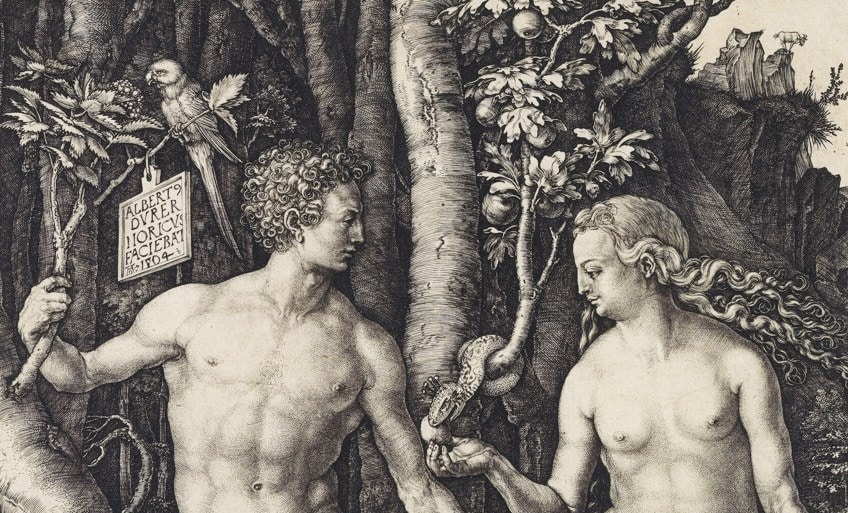 The Adam and Eve print engraving by Albrecht Dürer, during his time, was an example of his artistic skills, understanding, and exploration of classical techniques that focused on the proportions of the human body. These techniques were prevalent in Italian Renaissance paintings and espoused by famous artists like Leonardo da Vinci.

Dürer also utilized a familiar theme amidst numerous Adam and Eve painting examples. Not only this, but his engravings were his marketing materials, so to say. These were mass-produced due to the development of the printing press, which furthermore allowed him to disseminate his prints to various locations. Dürer’s reputation developed as one of the greatest Renaissance artists of the time, uniquely straddled between the Italian and German Renaissance art worlds, a virtuoso of both. The “Adam and Eve” location is now the Metropolitan Museum of Art in New York City.

Who Created the Adam and Eve Engraving?

The German Renaissance artist, Albrecht Dürer, created the famous Adam and Eve print from his engraving in 1504.

What Does Albrecht Dürer’s Adam and Eve Mean?

The Albrecht Dürer Adam and Eve (1504) print engraving has various symbolic references, most notably the Biblical narrative about Adam and Eve and the Fall of Man. Some of the symbols are depicted by the animals and tree branches, which symbolize different parts of nature and humanity. It also depicts Dürer’s skill in portraying human anatomy and proportion reminiscent of the Italian Renaissance techniques that he studied.

Where Is the Dürer Adam and Eve Engraving?

Albrecht Dürer’s Adam and Eve location is at the Metropolitan Museum of Art in New York City, the United States of America.