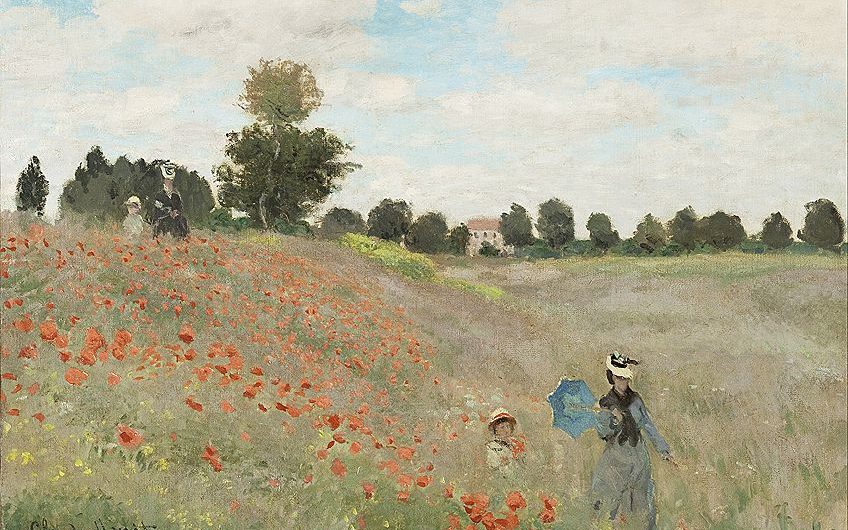 This article will discuss Wild Poppies Near Argenteuil (1873) by Claude Monet, which is just one example of many of his en plein air paintings depicting his mastery and love of color and light in visual compositions.

Artist Abstract: Who Was Claude Monet?

Claude Monet’s date of birth was November 14, 1840, and he died on December 5, 1926. He was born in Paris, France. He was one of the leading artists of the French art movement called Impressionism, of which he and several artists started the group called Anonymous Society of Painters, Sculptors, and Engravers. Monet’s style was characterized by how he portrayed light with his use of color and brushwork. Some of his famous artworks include his series titled Haystacks (1890 – 1891), Rouen Cathedral (1892 – 1894), and Water Lilies (1840- 1 926). 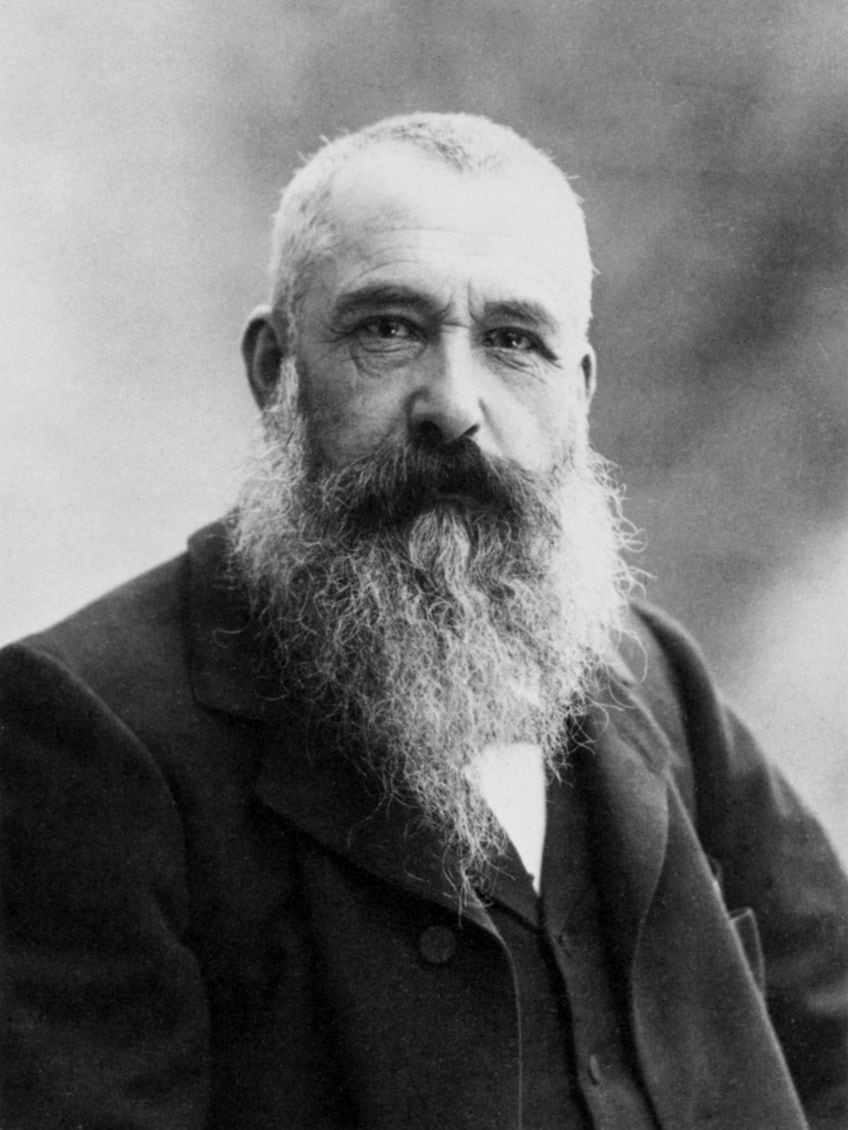 Wild Poppies Near Argenteuil (1873) by Claude Monet in Context

We will discuss Wild Poppies Near Argenteuil by Claude Monet in more detail below, including a contextual analysis around where he painted it and who the figures are, also looking at the formal elements of how he painted it, for example, his use of color and texture, and more.

Claude Monet painted Wild Poppies Near Argenteuil in 1873, which was when he lived in Argenteuil; he moved there from 1871 and reportedly lived there for six years. During his time there he was inspired by the surrounding landscapes from the natural environment and painted numerous scenes including his oil on canvas Argenteuil (c. 1872) and The Argenteuil Bridge (1874), among others. 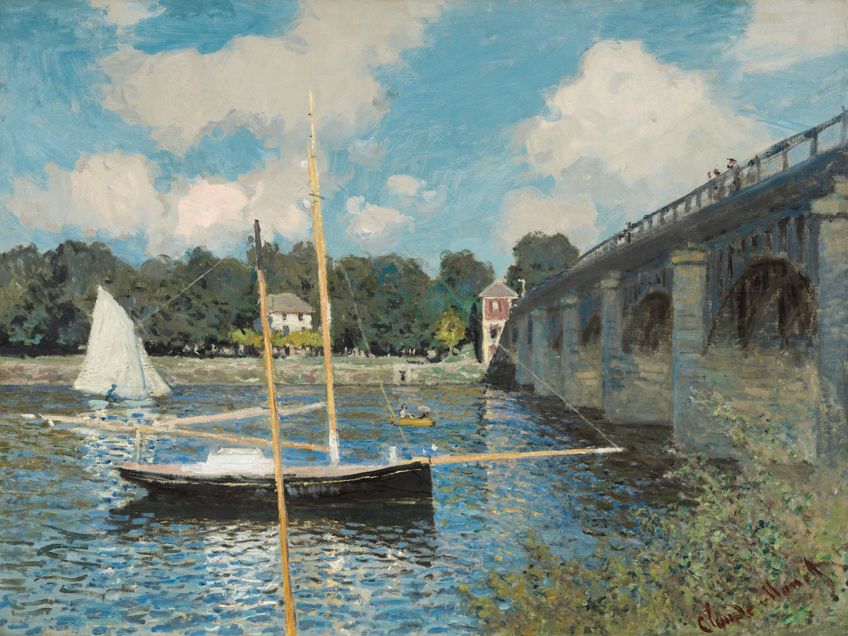 Argenteuil was also an attraction for other Impressionists like Édouard Manet who painted the oil on canvas simply titled Argenteuil (1874) and Pierre-Auguste Renoir’s Sailboats at Argenteuil (1874), to name a few.

1874 was also an important year for the Impressionist artists because they held their first exhibition, which was independent of the Paris Salon. It was in a studio that belonged to the French photographer known as Nadar (his full name was Gaspard-Félix Tournachon.

Claude Monet exhibited his poppy field painting during this exhibition.

Claude Monet depicted the effects of light through art elements like color and texture, a visual exploration of an outdoor scene. The formal analysis below will provide a description of the subject matter and how the following art elements of color, texture, line, shape, form, and space are composed in the poppy field painting. 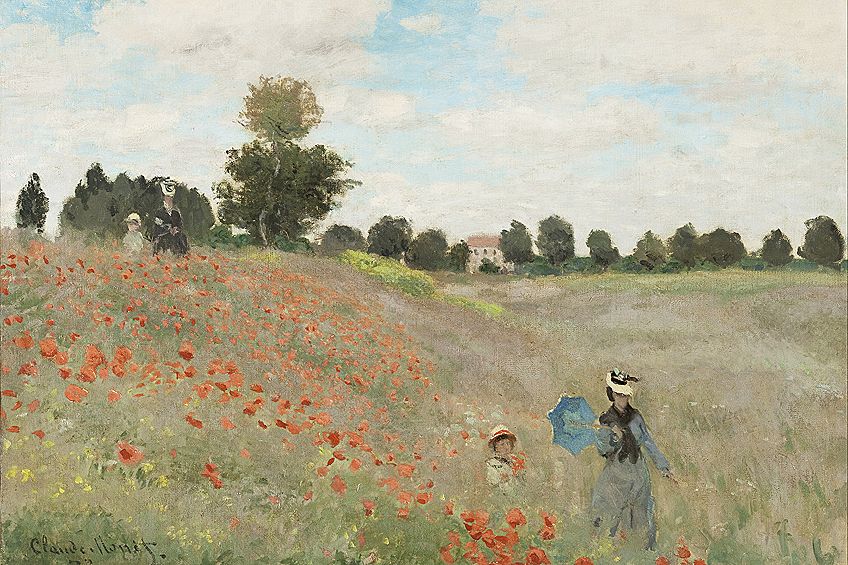 Claude Monet’s poppy field painting depicts a grassy and hilly field spanning around half of the composition, and the other half is lined with trees, which compose the visual background and horizon line, including what appears to be a three-story house (possibly a mansion or what is sometimes called a villa) with a red roof centrally placed between the trees.

The upper portion of the composition is a blue cloud-filled sky.

The right side of the grassy embankment is bedecked with red poppy flowers and in the foreground, more to the right, are two figures, a woman, and a child, who are believed to be Monet’s wife and son, Camille, and Jean, respectively, at the bottom of the bank, facing our, the viewers, direction, and they appear in the action of walking as if at any moment they will walk out of the frame. 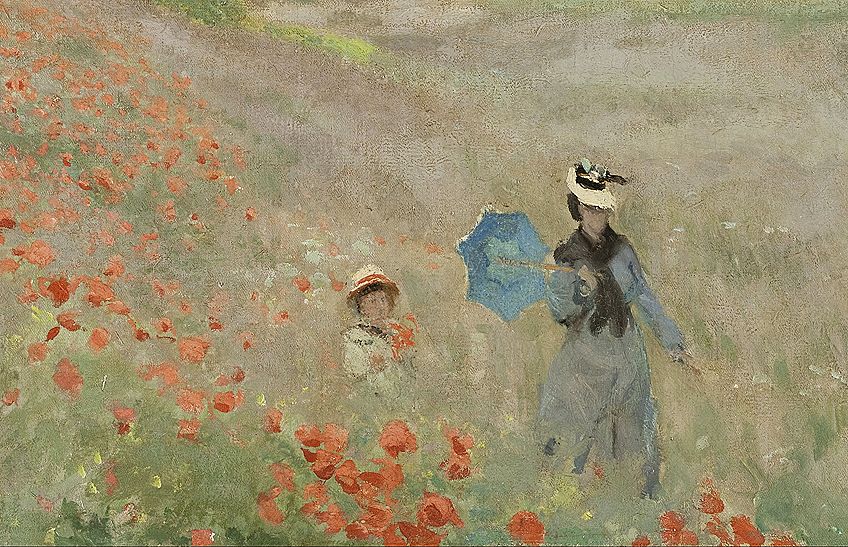 On the top of the embankment to the right are two more figures, a woman, and a child, appearing to start their descent down the hill. The figures are possibly mothers with their children. The woman in the foreground is also holding a parasol in her right hand (our left).

Wild Poppies Near Argenteuil by Claude Monet is largely composed of blues, greens, yellows, reds, and white. The field to the left is eye-catching because it is mostly red from the poppy flowers, while the rest of the field to the right is in a lighter mixture of greens and blue. The trees in the background appear in darker greens, harmoniously contrasted, and balanced by the light blue with the white of the sky and clouds. 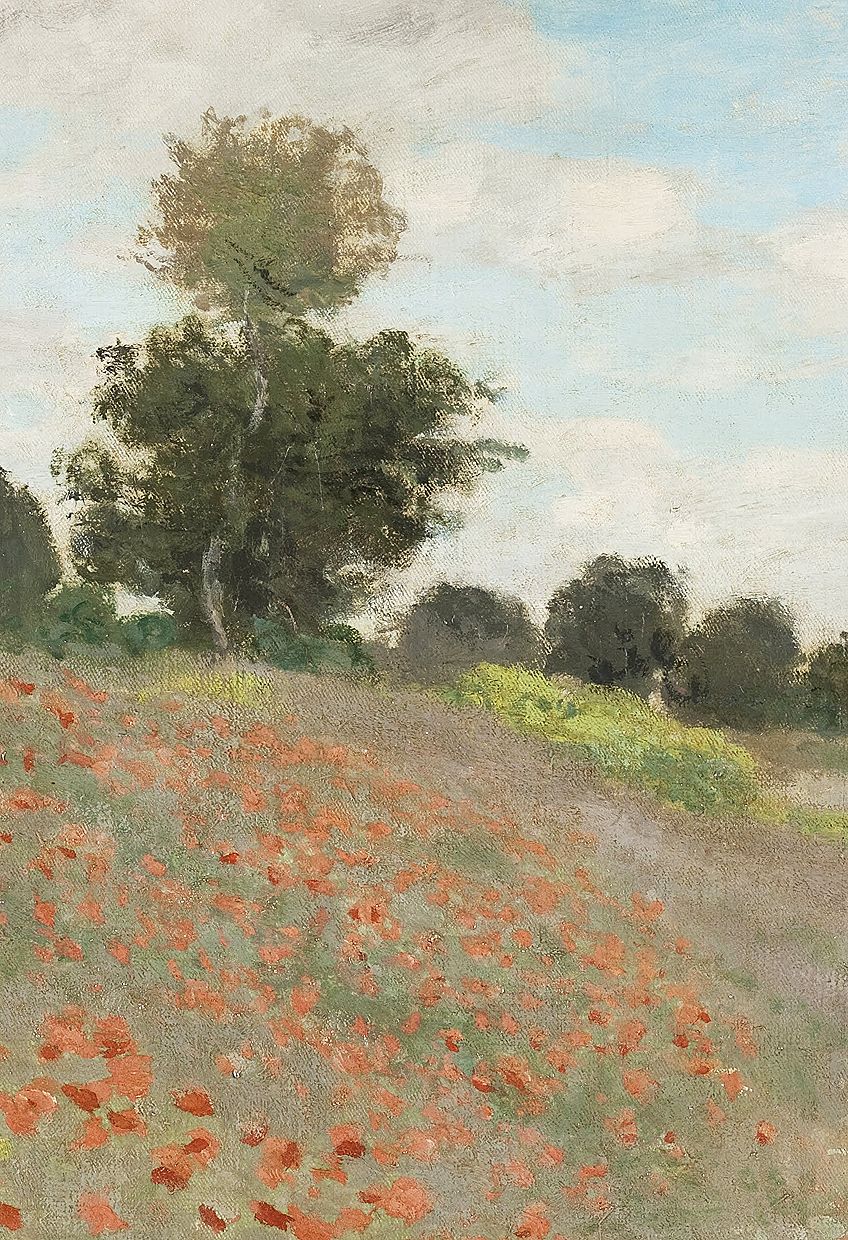 As per Claude Monet’s painting style, his brushstrokes consist of a variety of short and choppy, for example, the figures and the field, to thicker dabs and dots, for example, the poppy field and grass around them. Some areas are also thinly applied as if in scumbles to create the texture of the tree’s leaves or the clouds in the sky.

Monets brushstrokes are expressive and filled with life, which gives us the “impression” of a fleeting everyday scene outside. 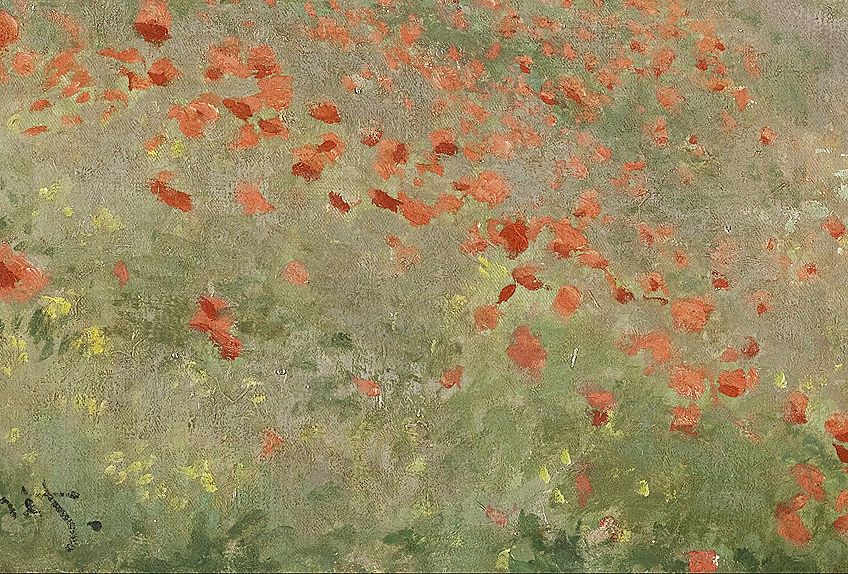 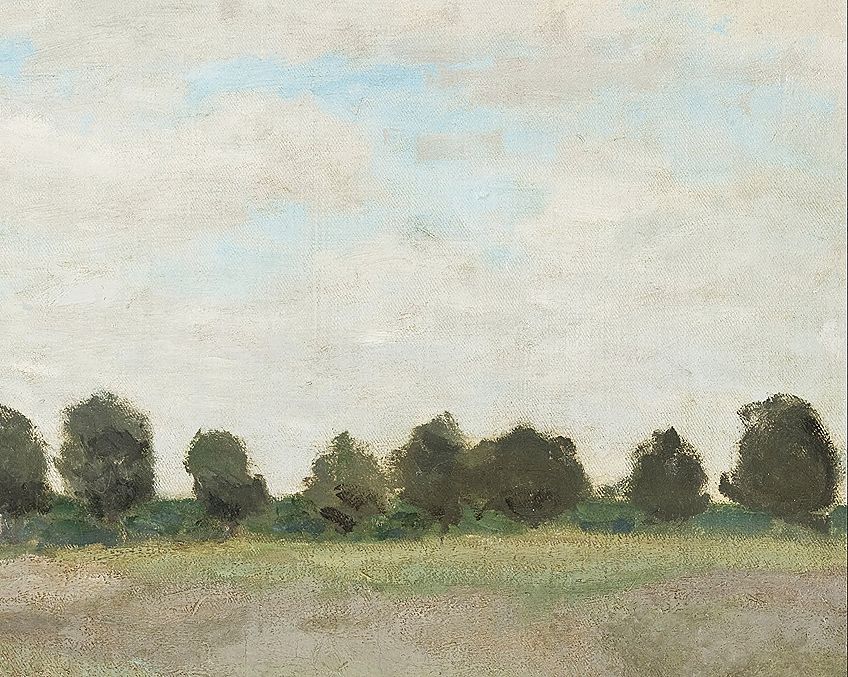 Use of Line in Wild Poppies Near Argenteuil (1873) by Claude Monet; Claude Monet, Public domain, via Wikimedia Commons

Shape and form are seemingly dictated by Claude Monet’s fluid brushstrokes in the poppy field painting. There are a variety of natural/organic shapes that occur from the irregular formations of the clouds, the more rounded bushes that make the trees, and the rectangular and triangle-like shape of the house in the background.

There are also smaller irregular dots on the poppy field.

While form is more achieved through three-dimensional shapes, in the poppy field painting Monet created an aspect of depth by shading certain areas of the subject matter, for example, notice the fuller organic form of the large, towering tree to the left 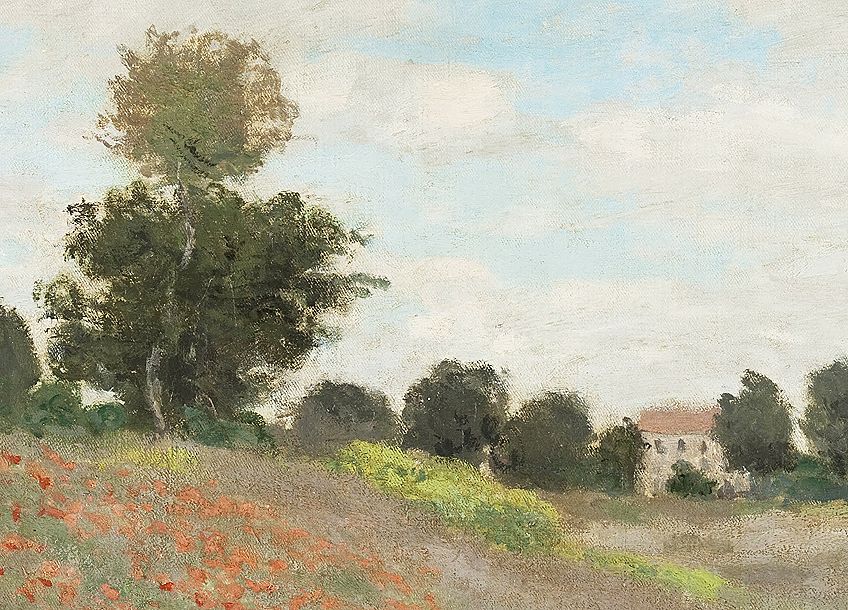 The compositional space is composed of the poppy field in the foreground reaching into the middleground and background, which is defined by the row of trees and house in the background. However, Monet composes the space by placing focus on the figures in the foreground as well as the poppy field, which becomes the primary focus of the scene. The space also suggests the area Monet painted, which was probably further into the countryside from Argenteuil.

A Field of Wonder

This article discussed Wild Poppies Near Argenteuil by Claude Monet, when he painted it, and where he lived, which was in Argenteuil at the time. It also discussed Monet’s artistic style in terms of the art elements, and specifically how he utilized the elements of color and texture to create the effects of light, which can be viewed throughout most of his artworks.

Claude Monet was known as one of the leading Impressionists and many would say that he has become analogous with the art movement, interestingly his famous “Impression, Sunrise” (1872) inspired the art style’s name. Artists painted outdoor scenes and often on the spot as the moment occurred, which is a moment Monet shows us in his poppy field painting, a field of color and ultimately artistic wonder.

Who Created the Poppy Field Painting?

The poppy field painting titled Wild Poppies Near Argenteuil (1873) was painted by Claude Monet, which was when he lived in Paris, France. He was inspired by the natural landscapes and painted several scenes depicting similar subject matter.

Where Is Monet’s Poppy Field Painting?

Wild Poppies Near Argenteuil (1873) by Claude Monet is at the Musée d’Orsay in Paris, France. It was donated to the museum in 1906.

Who Are the Figures in Wild Poppies Near Argenteuil by Claude Monet?

The two figures in the foreground of Wild Poppies Near Argenteuil (1873) by Claude Monet are believed to be his wife Camille Monet and his son, Jean, who was reportedly their firstborn, and both of whom Monet painted in other compositions like Woman with a Parasol – Madame Monet and her Son (1875).