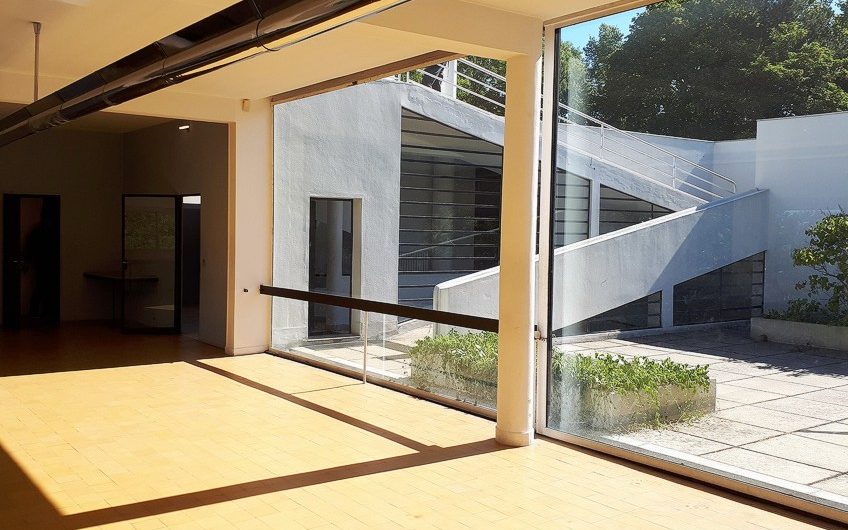 Le Corbusier’s Villa Savoye, situated in Poissy, Paris, is the epitome of 20th-century modern architecture. From its minimalistic approach, the use of concrete throughout, and the complete celebration of the new machine age. One of Le Corbusier’s most famous sayings is that “the house is a machine for living”, and from the moment you initially lay your sight on the house, it is clear that this statement of his was the inspiration for the house.

History of the Villa Savoye

In 1928, Le Corbusier and his cousin, Pierre Jeanneret, were commissioned by the wealthy Savoye family to design this countryside sanctuary as a retreat for them. The brief that the architects were given was mainly open for interpretation, and the only requirements were that the clients needed a space for their cars, a caretaker’s lodge, and an extra bedroom.

Le Corbusier and his cousin came up with five design proposals for the house within the client’s budget, however, excluded the landscaping and the lodge. This meant that the entirety of the project ended up over double the original budget. A few alterations to the designs were made to bring down the cost, such as a double lodge that became a single lodge.

At this point in his career, Le Corbusier was particularly fascinated with the design of steamships and technology. The streamlined simplicity and modular design techniques contributed greatly to the aesthetic for not only the Villa Savoye but most of his designs.

By the time Le Corbusier designed the Villa Savoye, he was already an established and favorite architect. Born on the sixth of October 1887 in Switzerland, Le Corbusier grew up to become a painter, designer, architect, writer, urban planner, and ultimately the father of modern architecture.

His professional career spanned a lengthy five decades while he designed buildings all over the world.

Le Corbusier dedicated his career to finding solutions for the overcrowding of cities which made him a very influential urban planner. He was a founding member of the CIAM (Congres International d’Architecture Modern) and 17 of his projects in seven countries are on the list of the UNESCO World Heritage Sites. 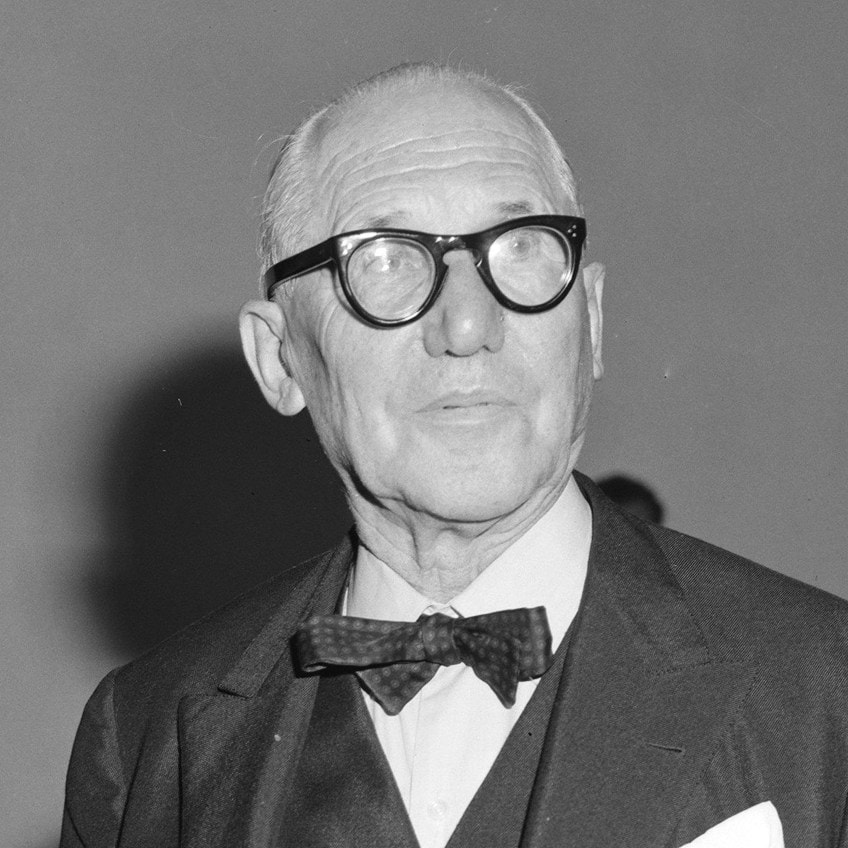 Use and Restoration of the Villa Savoye

When the construction of the house was completed in 1931, it was officially handed over to the new owners that same year. During the next few years, quite a few repairs had to be done due to leaks forming throughout the building, as well as other quality issues which were a result of budget cuts.

The original owners inhabited the house from 1931 to 1937, after which it remained empty and abandoned for about 20 years.

During World War II, the house was used by the German army for storage of hay. In 1958, the city of Poissy bought the house with the intent to demolish it to make way for a new school. Against all odds, Le Corbusier himself, of all people, was appointed by the city to design the new school. This, of course, meant that Le Corbusier took notice of the plans to demolish his Villa Savoye, after which he did everything in his power to put a stop to the demolition plans. He even proposed to take charge of the rehabilitation of the building himself to convert it into a museum for it to properly serve as a historical monument. 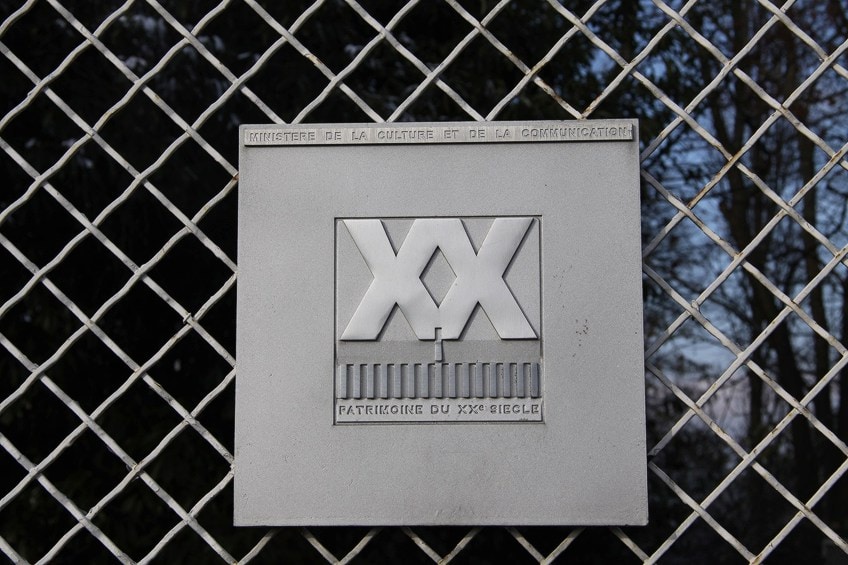 Sign indicating that the Villa Savoye belongs to the list of French architectural monuments; Ing.Manga, CC BY-SA 3.0, via Wikimedia Commons

He took on the restoration and conversion of the Villa Savoye in 1959. He worked on the project until he died in 1965. The Villa Savoye was added to the register of historical monuments in 1965, while Le Corbusier was still alive, which made it the first restoration project while its architect was still living.

In 1985, a restoration process was funded and put in place by the state and was led by architect Jean-Louis Veret.

The restoration was completed in 1997 and included structural repairs as well as exterior repairs to all the terraces and facades because of the state of the corrosion of the concrete. Also included in the restoration was the installment of security cameras and lighting as well as the replacement of some original fixtures and accessories.

How the Villa Savoye Was Built

Throughout his professional career, Le Corbusier was set on finding a new way of building and he wanted to create a sort of blueprint for all other modern buildings to follow. He came up with a set of rules to follow for the designs of his buildings. He called this list “The Five Points of Architecture”, which he applied religiously, especially in the case of his Villa Savoye. The five points are:

These five points, however, weren’t just conjured up during a dream but were rather developed from his obsession with steamships and technology at the time: The pillars that were the supports for the decks, the ribbon windows on the shops, the diagonal ramps affording movement through the ships – all these elements ended up concluding his five points of architecture.

When combined, these elements are also known as the “domino” concept, which reduces the load-bearing structural elements of a house to only pillars and concrete slabs.

He named the concept “domino” because of a house he designed named Maison Domini, in which he used this concept for the first time. With this method, the weight of the building is pulled downward entirely and leaves the facades free to act only as a light skin to the building.

The piloti of the Villa Savoye is situated all around the perimeter of the ground floor of the building. The piloti forms a square grid that supports the upper volume of the house on three sides of the home, which is referred to as a pentastyle grid. The piloti allows the building to appear as if it is floating, as well as opening the entirety of the ground to enable it to act as a free plan, which visually separates the structure from its partitions. This also means that the facades above are now free from load-bearing elements, which means that windows could be installed from corner to corner, without any interruptions.

The concept of making use of piloti on the entirety of the ground floor contrasted with the popular use of masonry architecture which suggested that a building needs to be structurally and visually connected to the ground.

Le Corbusier wanted a garden space, without occupying the open ground floor. His solution was to incorporate a roof garden in the center of the house, surrounded by large sliding doors and windows that let natural light and sunlight into the house throughout the day.

The roof garden faces south, and instead of the traditional way of the garden being at the end of the house, the garden is the central element around which the house was built. In the case of the Villa Savoye, the roof garden also connects the first and the second floors. 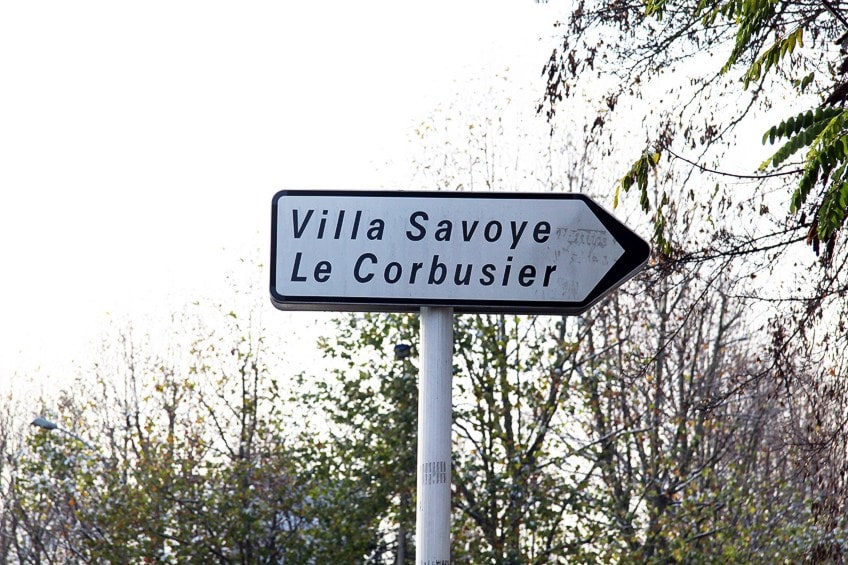 Exterior Features of the Villa Savoye

At first glance, the house seems to be floating against a backdrop of greenery on very thin pilotis. Le Corbusier went as far as to specify for the lower-level walls of the building to be painted green to emphasize the floating effect of the building by making the lower-level blend in with the green backdrop. On the lower floor plan, the Villa Savoye has a very eye-catching element: the curved glass façade, which can be seen on the lower level.

The curve of the facade was specifically designed to mimic the turning radius of 1920s cars to make it easier to drive through the driveway underneath the house and pull into the garage.

Interestingly, there is no main facade to the building. None of the facades stand out in any way, and each of them is unique. The free-flowing ramps are considered the spine of the house. The ramp ties all the spaces together and passes from the inside to the outside. The ramp is also entirely visible from outside of the house.

Upon entering the Villa Savoye interior, you are met with stars as well as a long ramp that leads to the first floor, guiding you to peak at specific views, like part of the rooftop garden, through intentionally placed windows. 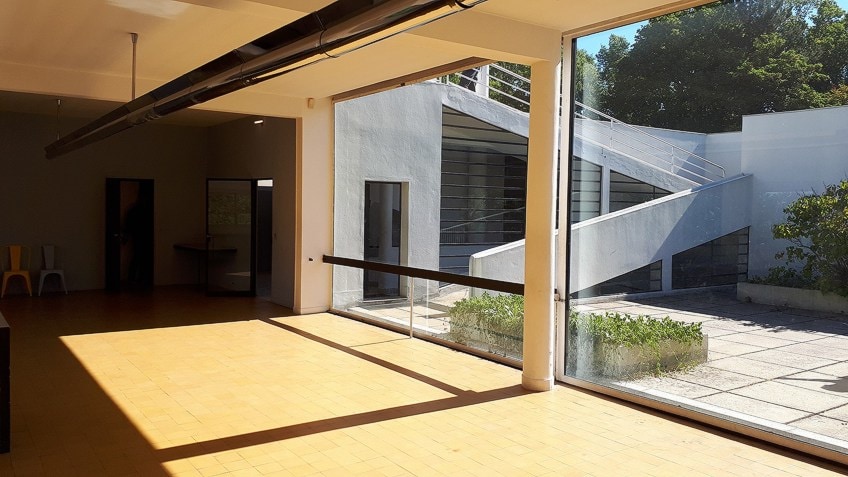 A view of Villa Savoye’s ramp from the roof terrace to the second-floor solarium; Netphantm, CC BY-SA 4.0, via Wikimedia Commons

On the second floor is several sculpted enclosures that formed the sunroom. According to the floor plan, the Villa Savoye was designed with the Golden section in mind, which in this case was a square that was divided into 16 parts, and then further divided to set the position of the entrance and the ramp.

Most of the interior walls are, non-surprisingly, modern, clean, and white. What is surprising about the Villa Savoye is that some rooms consist of colored accent walls.

During this time, Le Corbusier warmed up to the idea of using colors, at least indoors, as he believed that color is a strong mood modifier. He chose the wall colors based on the idea that warm colors are very stimulating and that cool colors bring calmness. The specific colors that he made use of on accent walls in the Villa Savoye are light pink, orange, vibrant blue, blue-tinted gray, and warm brown. 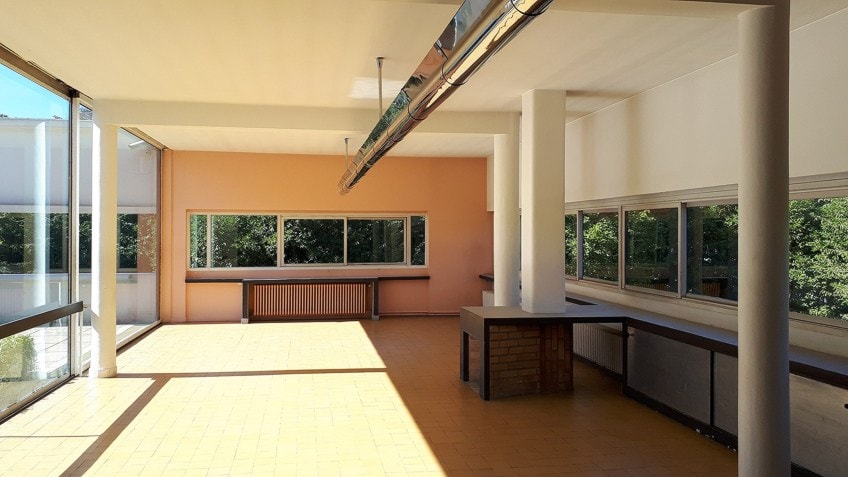 The living room of the Villa Savoye; Netphantm, CC BY-SA 4.0, via Wikimedia Commons

Contradictions of the Villa Savoye

For someone who had such a strong belief system, Le Corbusier made use of building methods that were very contradictory to his system and his explanation for his designs. Le Corbusier is known for working with new, revolutionary materials such as concrete and steel because of their predictability. But for reasons which no one understands, he chose to install wood window frames in the Villa Savoye instead of the more predictable aluminum frames that he lovingly made use of in all his other buildings. During the restoration of the house, which took place between 1963 and 1965, these wooden window frames were replaced with aluminum by John Du Bois, with Le Corbusier’s blessing.

Contradictions and controversies aside, the fact remains that the Villa Savoye was one of the most influential buildings of its time, of which proof can be found all over the world. The loose brief may have been, however regretful by the Savoye family, gave Le Corbusier the freedom to apply all these principles that he believed in so strongly, into one building for us to admire until this day.

Why Is It Called the Villa Savoye?

Le Corbusier simply named the house after his clients. Pierre and Eugenie Savoye commissioned the architects to design and build a country home, with very little stipulations as to what exactly they needed.

What Is the Concept of the Villa Savoye?

Le Corbusier wanted the Villa Savoye to be the ultimate example of modern architecture and the so-called machine-as-a-home archetype.

What Is the Most Significant Element of the Villa Savoye?

Why Is There a Ramp in the Villa Savoye?

Le Corbusier incorporated a ramp in the house that takes you from the ground floor entrance across to the very top of the building to prompt movement and usage of the entirety of the space.

What Are Ribbon Windows?

Ribbon windows are a succession of windows placed side by side to form one continual horizontal band across the entirety of a façade. 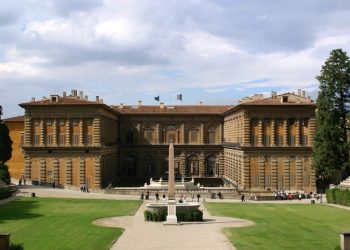 Pitti Palace in Florence – A Look at the Beautiful Florence Palaces