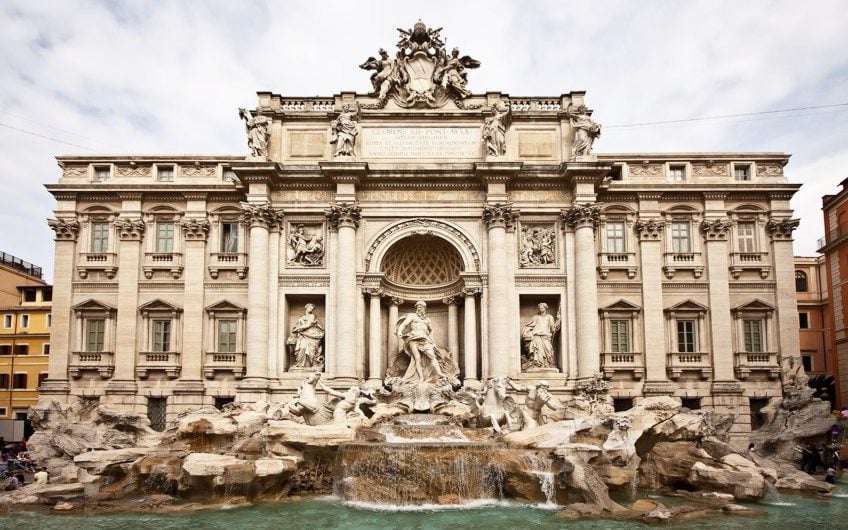 The Trevi Fountain in Rome

The Fountain of Trevi is a famous fountain in a famous city, therefore, you can imagine how often it has been used in movies throughout the years. In fact, it has appeared in more than six movies such as Roman Holiday (1953), Sabrina Goes to Rome (1998), and La Dolce Vita (1960). Who created this beautiful fountain, though? 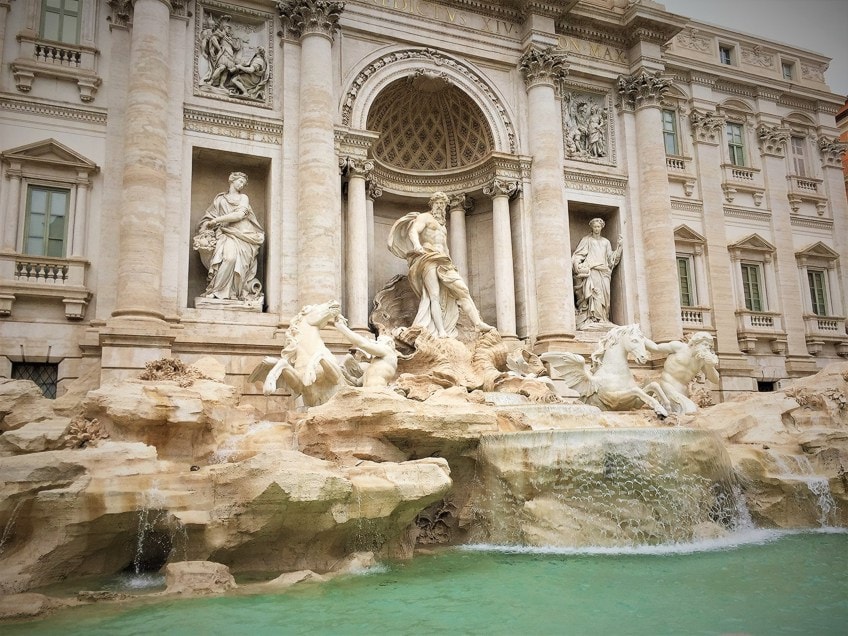 The Fountain of Trevi in Rome, Italy; Photo2021, CC BY-SA 4.0, via Wikimedia Commons

Nicola Salvi, The Designer of the Fountain of Trevi

In 1717, Salvi was accepted to the Roman Academy of Arcadia after completing studies in philosophy and mathematics. Antonio Canevari, the King of Portugal’s architect, was his architectural instructor. Canevari traveled to Lisbon in 1728, and Salvi pursued his work in Rome.

Decorations and tiny ornamental crafts were among the things he created as patronage for the construction of great structures in Rome had decreased in comparison to the preceding century.

Pope Clement XII launched bids for two big projects in 1732. One project was to build a new facade for the cathedral of Saint John Lateran, while the other was to build a public fountain in Trevi. Alessandro Galilei won the previous competition, although Salvi’s design received a lot of attention. Nevertheless, Salvi’s concept for the fountain was chosen above proposals by Luigi Vanvitelli and Ferdinando Fuga. Salvi died before his companion Pietro Bracci finished the fountain in 1762. 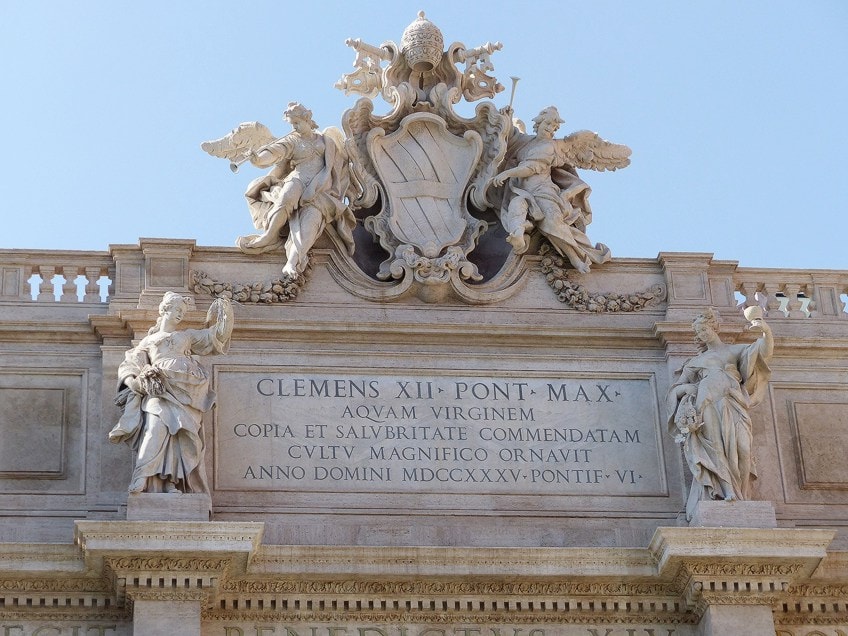 Close-up of the inscription above the Trevi Fountain. Translated, it reads: “Clemens XII Pontifex Maximus decorated the Virgin Aqueduct and committed it with abundance and salubrity to the cult in the Year of the Lord 1735, 6th year of his pontificate”; Benjamín Núñez González, CC BY-SA 4.0, via Wikimedia Commons

The History of the Trevi Fountain

The Trevi Fountain is as mysterious as it is beautiful. Despite its majesty, it is nestled between little streets, where you can barely hear the sound of water fountains before rounding the corner and being met by this gigantic monument. The fountain is erected at the intersection of three highways, at the last point of the Acqua Vergine, one of Rome’s most vital aqueducts that provides water supply to Rome.

Acqua Vergine is the present-day aqueduct that emerged from the Aqua Virgo, which was built in 19 BC by Marcus Vipsanius Agrippa out of a need to provide residents with proper public services.

The Roman Empire had a special and historical connection with water, and Ancient Romans were excellent engineers capable of performing remarkable feats for their time. Water from the surrounding hills poured into the city due to gravity and was then collected in cisterns that produced an energy vacuum, forcing the water to shoot out of specialized fountains.

Though very simple in construction, Rome is renowned for its multitudes of nasoni fountains featuring constantly running water. The city’s aristocracy frequently employed aesthetic measures to showcase Rome’s cultural refinement, and the Fountain of Trevi is no exception.

Though a fountain had been at that location since antiquity, it wasn’t until 1629, when Pope Urban VIII appointed Gian Lorenzo Bernini to design improvements, that the fountain started to acquire its modern appearance.

The project was discontinued when the Pope died, however, some of Bernini’s proposals were adopted into designs a hundred years later. Pope Clement XII organized a competition to remodel the fountain in 1730, and the project was eventually awarded to Nicola Salvi. Work started in 1732 under Salvi’s supervision and was completed in 1762.

The fountain was repaired twice, initially in 1988 to eliminate smog discoloration and once more in 1998; the masonry was cleansed and all fractures and other indications of decay were restored by experienced artisans, and recirculating pumps were installed.

The Italian fashion house Fendi revealed in January 2013 that it was going to support a two-year 2.2-million Euro repair of the fountain, which would be the most comprehensive repair in the fountain’s history.

Work on the restorations started in June 2014 and was finished 17 months later. On the night of the 3rd of November 2015, the Fontana di Trevi was relaunched with an official event. Over 100 new LED lights were installed as part of the repair to increase the fountain’s evening illumination.

The fountain, which was elaborately carved out of Travertine stone taken from neighboring Tivoli, represents the god of water, Oceanus, in the central alcove, surrounded by Salubrity and Abundance. A number of horns and tritons bring balance to the fountain under the deities. The Papal Coat of Arms is hung by angels at the pinnacle of the fountain.

The fountain is set against the Palazzo Poli, which has been given a new facade with a massive order of Corinthian pillars connecting the two major stories. 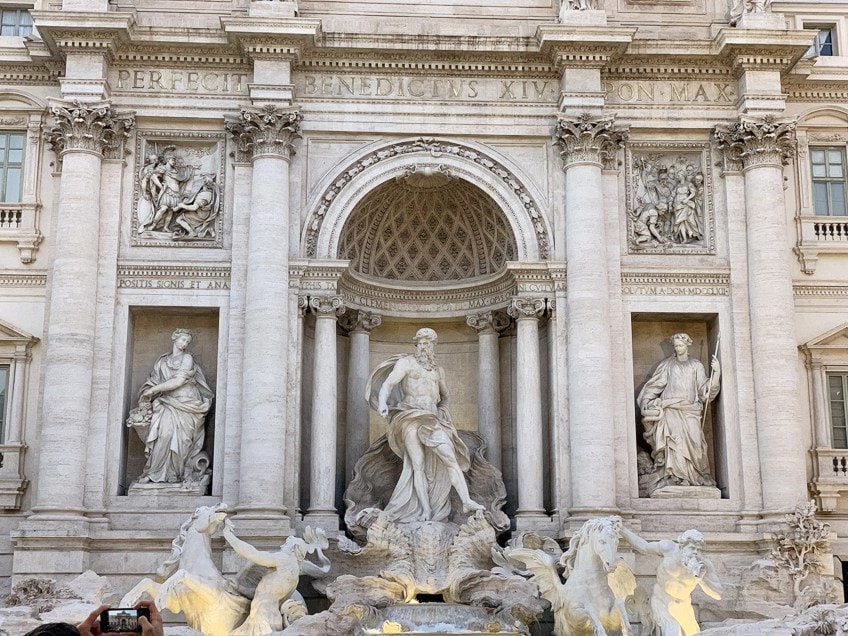 The Palazzo Poli is a palace situated right behind the Fountain of Trevi. To make more room for the construction of the Fontana di Trevi, the palace’s central section was demolished in 1730. Inside the Palazzo Poli is a museum that contains a collection of engraving plates made from copper dating from the 16th century. A dynamically designed triumphal arch is overlaid on the palace facade in the center. The columns in the middle niche framing Oceanus provide the maximum light and shadow play.

Horses and Tritons give a symmetrical equilibrium to the fountain, displaying the most variation in positions and attitude. 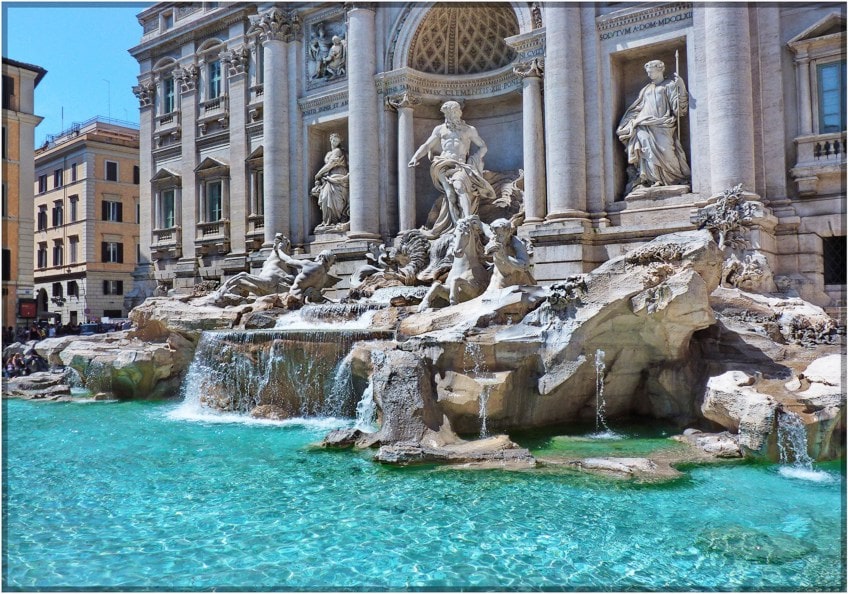 The Fountain of Trevi in Rome, Italy; patano, CC BY-SA 3.0, via Wikimedia Commons

Coin Throwing Into the Fountain of Trevi

Even if it hasn’t proven lucky for those who throw the coins, it has still provided luck in the form of relief for the needy. 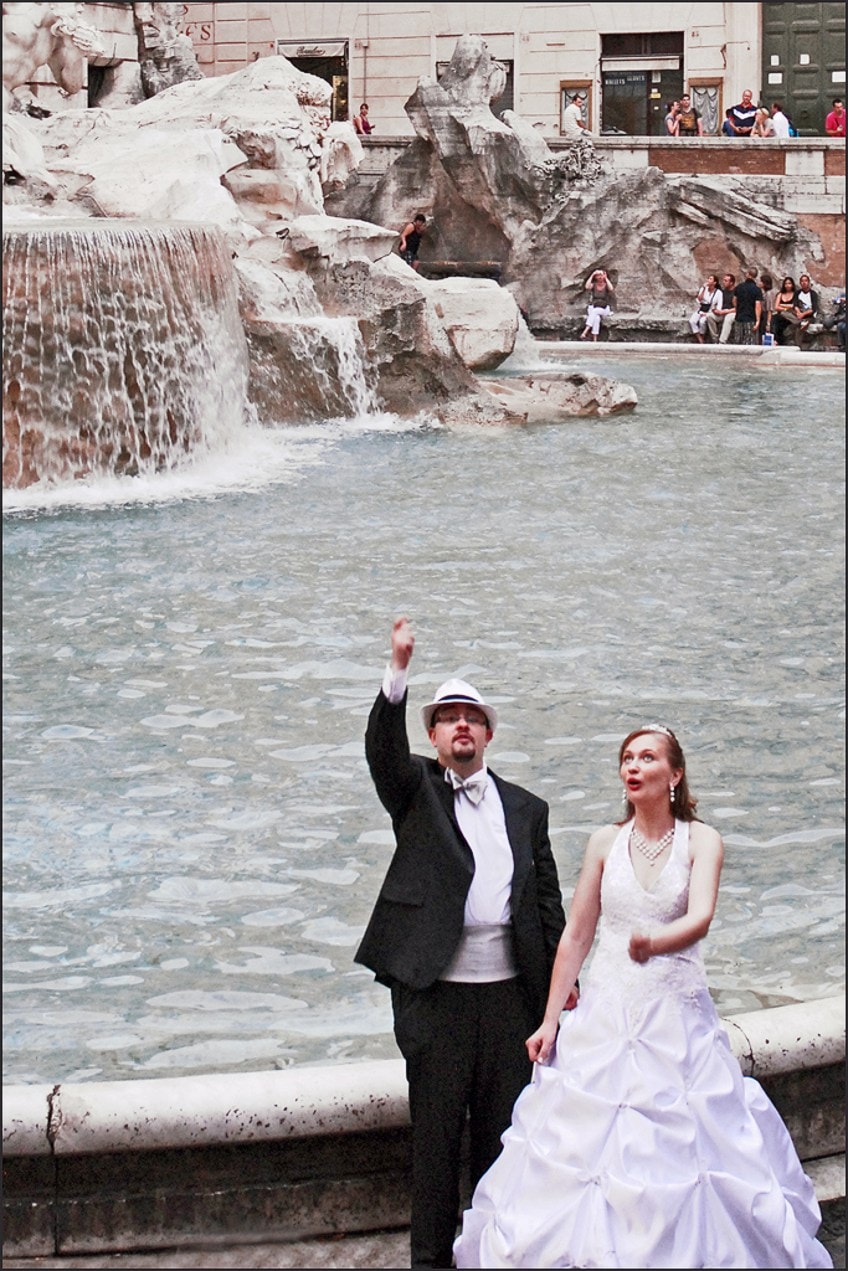 Newlyweds each throw a coin into the Trevi Fountain. Famous throughout the world, the Trevi Fountain is the work of Nicolo Salvi (1732). It is the object of a custom that consists of throwing a coin with her back turned to be certain of returning to Rome. In the case of newlyweds making this gesture together, it is a guarantee of marital happiness; Jean-Pierre Dalbéra from Paris, France, CC BY 2.0, via Wikimedia Commons

The coins are collected and the funds are put into special top-up cards which are given to the poor who can then go and buy groceries from a subsidized grocery store. In 2005, four of the fountain’s cleaners were arrested for stealing the coins as they cleaned.

The charity that received the coins notice a dip in the number of funds they were receiving and notified the council.

People often try to take coins out of the fountain though, and in 2003, a woman had her charges dropped after she argued to the judge that the money had been thrown away and didn’t belong to anyone. One famous coin stealer took euros from the fountain for around 34 years. 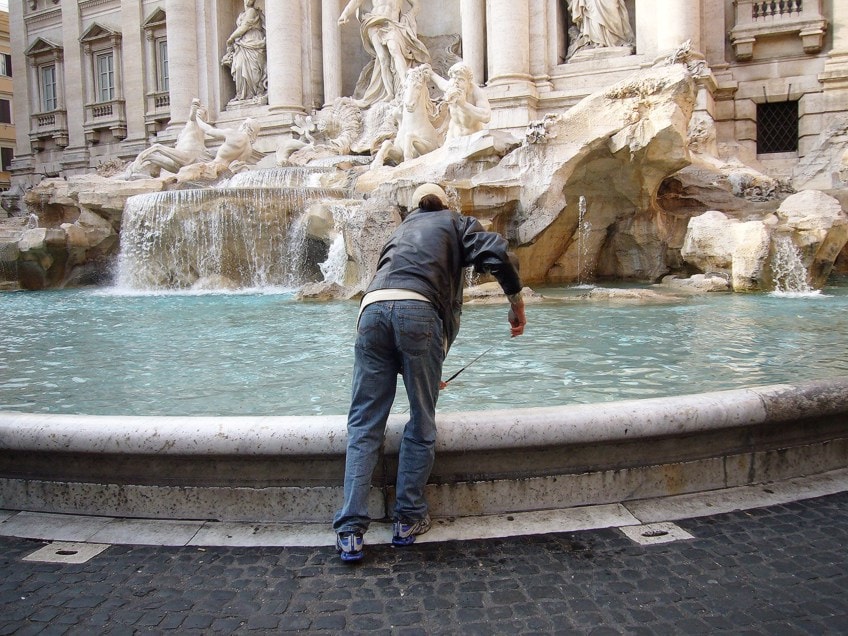 Awesome Facts About the Trevi Fountain in Rome

We have discovered who designed the Fontana di Trevi and what it looks like. We have learned about the history of the Trevi Fountain.

Now it is time to look at a few interesting facts about the famous Fountain of Trevi in Rome. 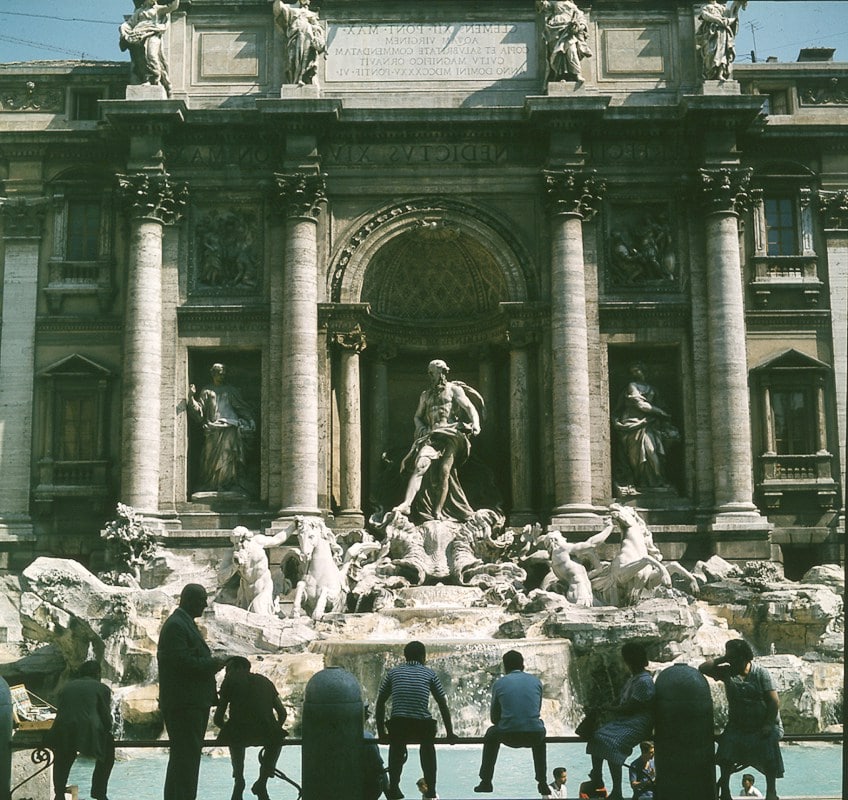 It Is One of Rome’s Oldest Water Sources

The Trevi Fountain goes back to the installation of the aqueduct in 19 B.C., which supplied water to the Bathhouses and fountains of ancient Rome.

The Aqua Virgo is claimed to be named after a young Roman girl who brought thirsty troops to the spring to drink.

Salvi Was Not the First Choice for the Architect

Pope Clemens XII organized a design competition for a new fountain in 1730. Many notable architects competed, but Nicola Salvi was ultimately chosen to create the fountain, despite some beliefs that he was not the first choice. Alessandro Galilei, a designer from the same line as the famed scientist Galileo, first obtained the commission for the design, but following a public uproar, the commission was eventually handed to Salvi.

What was the cause of the public’s outrage? Salvi was a local Roman designer, but Galilei was a Florentine.

The Trevi Fountain in Rome Is Made From Travertine

Travertine stone is the same material that was used in the Roman Colosseum. Travertine is a calcium carbonate mineral created from spring liquids, particularly hot springs; the most likely origin was the village of Tivoli, some 22 miles from Rome. Many people were wounded and a few killed while working with the massive pieces of stone during construction, such as in 1734, when a stonecutter was squashed by a big block of travertine. 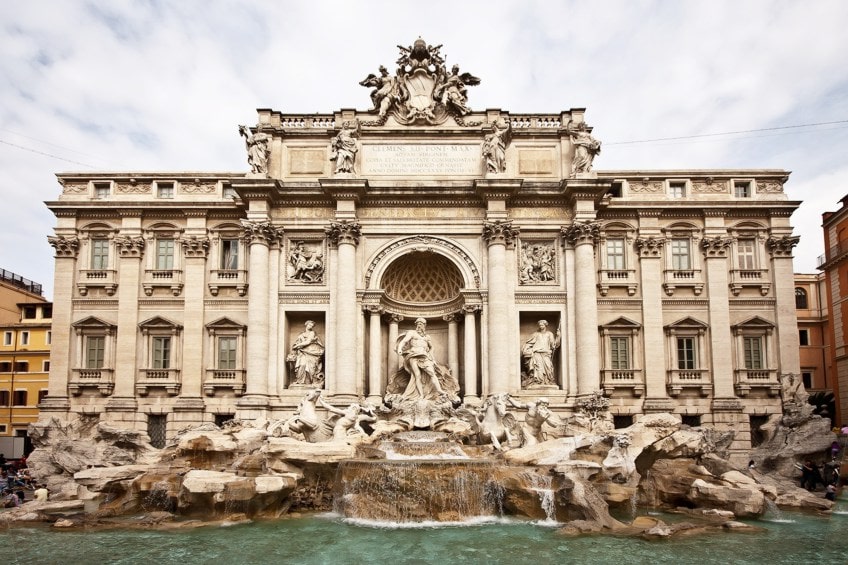 The Fountain of Trevi Uses Loads of Water

Every day, the fountain pours around 2,900,000 cubic feet of water due to water pouring from several sources and the enormous pool in front!

But don’t worry, the water is now recycled.

Following the passing of the actor Marcello Mastroianni in 1996, the fountain was switched off and wrapped in black crepe. Mastroianni appeared in La Dolce Vita (1960), a film whose most iconic scene was shot in the Trevi Fountain, lifting the fountain to new heights.

The fountain changed color in 2007 after someone spilled a liquid substance into it, turning the water bright red. Because the fountain has a closed loop water system, the water that poured from it became red as well. While there was concern that the liquid might permanently harm the fountain, the water was emptied quickly enough that no damage occurred, simply a group of somewhat shocked tourists!

The Trevi Fountain, Rome’s most recognized water feature, has become one of the city’s must-see monuments, not just for its grandeur, but also for its intriguing history. Regardless of the fact that it was built later than the majority of fountains in Rome, the fountain has ancient origins. It was in fact constructed alongside the Aqua Virgo Aqueduct, which was completed during the reign of Emperor Augustus and is the only still operating ancient Aqueduct of the Roman Empire!

Where Is Trevi Fountain Located?

The famous water feature is located in the Trevi district in Rome. The area was given that name because the word Trevi means refers to a place where their roads meet. The water fountain had actually been there a long time before the monument was built around it, and had been used for many years as a place to replenish water for travelers and locals. Straight behind the fountain is the Palazzo Poli, a palace that was altered to make room for the monument that was to be built in front of it.

Who Designed the Fountain of Trevi?

Nicolas Savli was behind the Trevi Fountain’s architecture after he won a competition for the commission created by the Pope. He was apparently not the first winner that was chosen though. A relative of Galileo named Alessandro Galilei originally won the competition, yet Salvi eventually replaced him following a huge public outcry about Galilei winning the commission. Locals were not at all happy with the first choice as Alessandro Galilei was an outsider from Florence, whereas Nicola Salvi was a local designer.

Why Do People Throw Coins Into the Trevi Fountain in Rome?

Throwing coins into the Fontana di Trevi is supposed to bring good luck. It didn’t bring good luck to the employees who were arrested for pocketing coins when cleaning the fountain though! It is estimated that around 3,000 euros end up in the fountain every day, but it doesn’t go to waste though. The coins are regularly collected and are used to help feed the poor people of Rome by providing them with a card that is pre-loaded with funds raised from the collection of coins. The card can then be used at a grocery store that has been created for them. It is a great system as it is not a small amount of money. It was estimated that there was around 1,5 million euros worth of coins collected in 2016 alone! 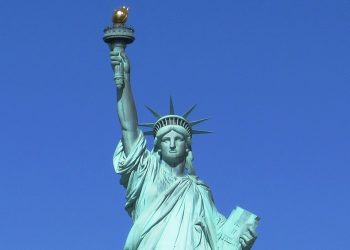 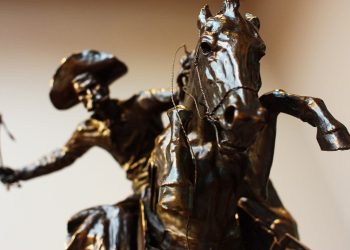