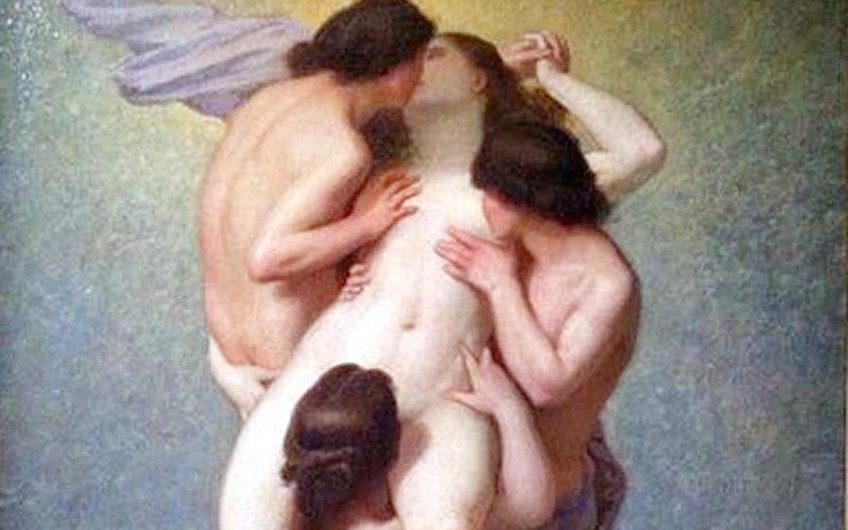 The Cursed Woman painting by Octave Tassaert could possibly be considered a 19th-century version of pornographic imagery due to its overt sexual display between four women. This 1859 painting is indeed a fleshy portrayal and one we will discuss in more detail in this article. It is cautioned that this painting and description below will contain content for adult readers.

Artist Abstract: Who Was Octave Tassaert?

Nicolas François Octave Tassaert was born on July 26, 1800, and died on April 24, 1874. He was born in Paris. He was from a family of artists and learned from his family members who were engravers and sculptors. He worked as an engraver and lithographer, as well as an illustrator. He attended the École des Beaux-Arts in 1817 and exhibited his paintings in the Paris Salon, which he discontinued in 1857.

He was famous for history and genre paintings, especially exploring everyday issues like homelessness, suicide, and sickness.

Due to problems with his eyesight and alcoholism, he eventually stopped painting and committed suicide. He became highly regarded within the field of social justice because of his paintings’ serious subject matter. 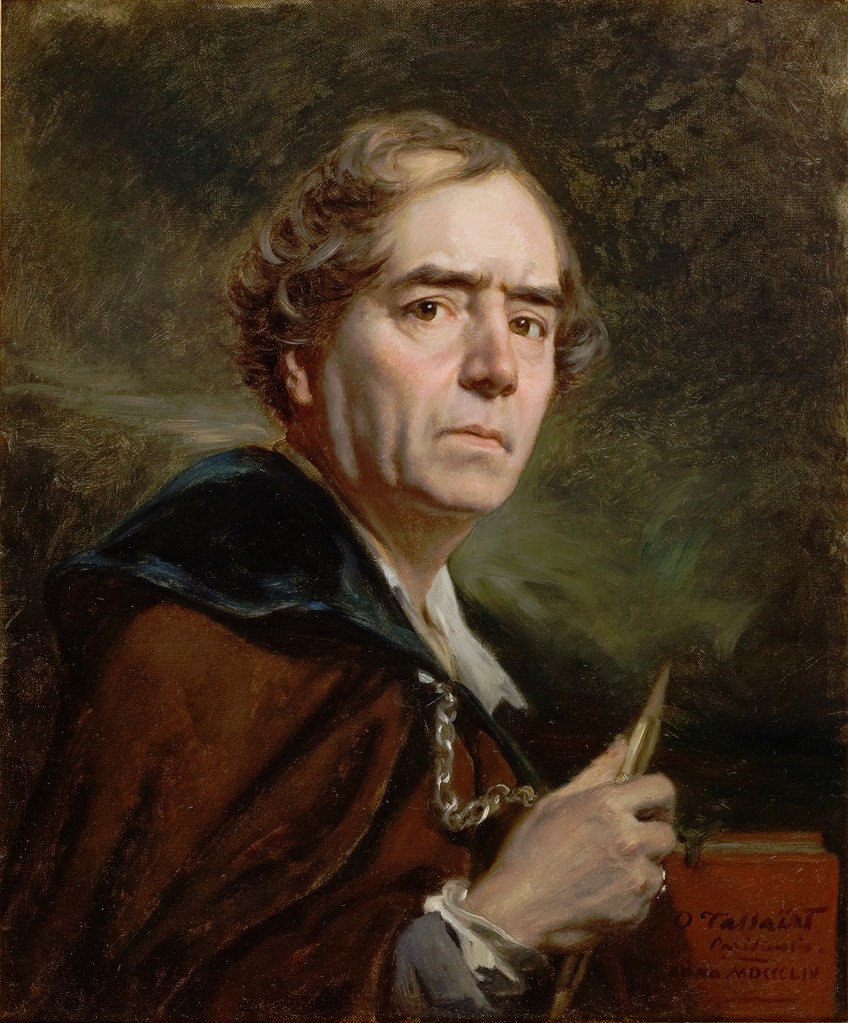 The Cursed Woman (1859) by Octave Tassaert in Context

Below we will discuss a brief contextual analysis, exploring The Cursed Woman (1859) story, also titled in French as La Femme Damnée. We will then discuss a formal analysis, providing a visual description and some of Octave Tassaert’s stylistic approaches in terms of the art elements like color, texture, form, and so forth.

Octave Tassaert was known for depicting scenes in his paintings ranging from religion, allegory, and history, for example, Heaven and Hell (1850), while also producing various genre paintings that explored the harsh and everyday realities of urban life, depicting scenes about death, homelessness, sickness, and poverty.

One of his nicknames was “Prud’hon of the Poor Man”.

Some of his central figures were women, depicted in various situations, notably his portrayals of women and their children, either in despair or death, for example, the Destitute Dead Mother Holding Her Sleeping Child in Winter (c. 1850), An Unfortunate Family or Suicide (1852), The Deserted Woman (1852), and others. 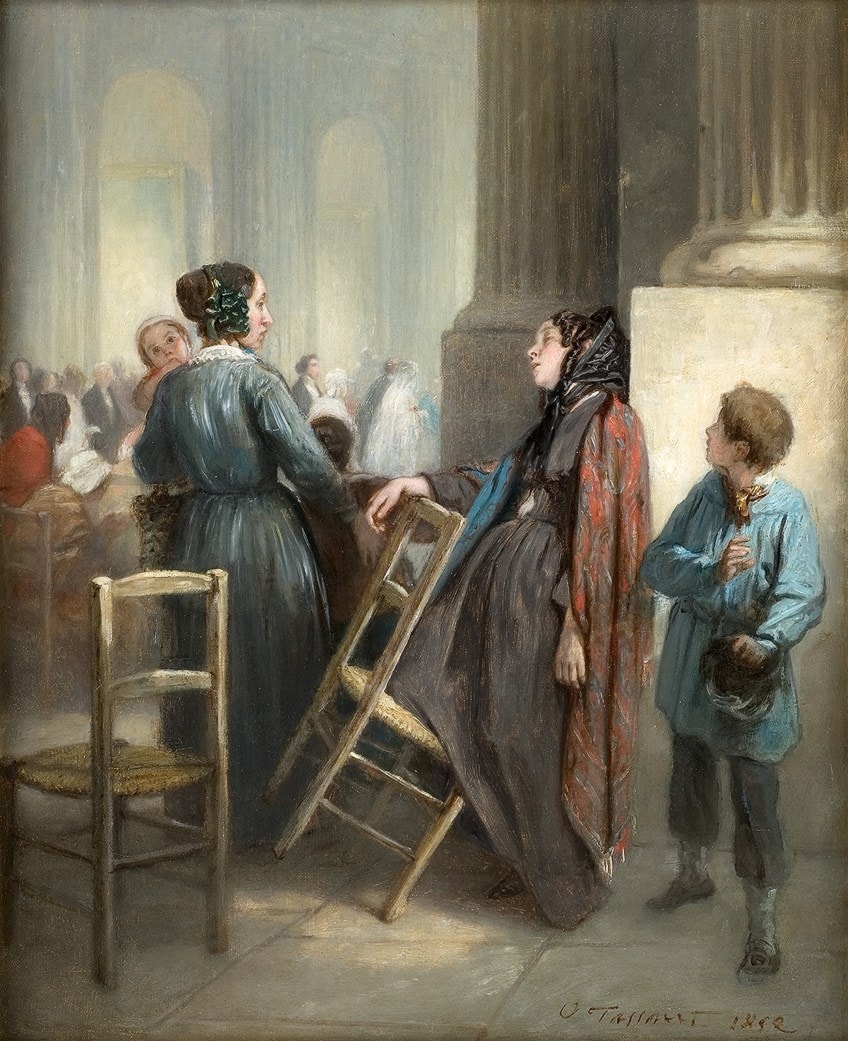 Many art sources have also questioned what The Cursed Woman (1859) story is all about and how the subject matter, which appears to convey pleasure, relates to its title, which alludes to being “damned”. Hence, La Femme Damnée, or “The Damned Woman”, in other words, the opposite of pleasure.

However, as many have stated, the central figure here appears far from being “damned”.

As for The Cursed Woman by Tassaert meaning, some have mentioned that this could be the Greek goddess Aphrodite, who is pleasured by “celestial spirits”, while other sources posited that these could be “angels”. 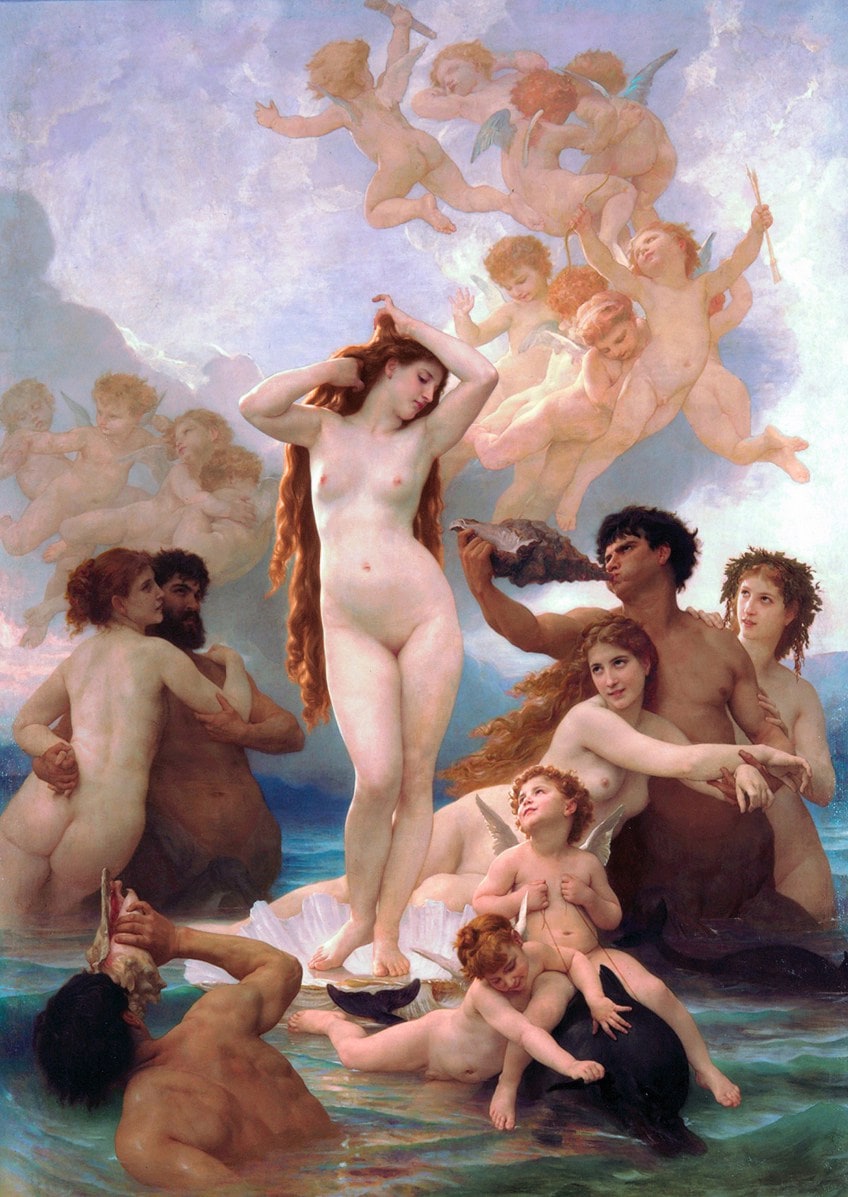 It is also important to note the role and perception of women, nudity, and sex during the 1800s in France. During these times, nudity was portrayed in mythological or historical paintings, but often more acceptably in the guise of Greek goddesses or gods like Venus and so forth.

Nudity and sex were depicted as boldly as we see in “The Cursed Woman” painting by Octave Tassaert and would have undoubtedly caused a stir.

This recalls another famous painting produced only a few years after in 1863, which was Olympia by Édouard Manet. Here we see another woman, not a mythological goddess, reclining in the nude, confidently gazing at us, the viewers. She has often been regarded as a prostitute.

In The Cursed Woman by Octave Tassaert, we cannot be certain if she too may be a prostitute, but there is also confidence in her sexuality here. The title can possibly refer to prejudices related to women and their open sexuality during the 1800s; in other words, a woman so open and free is “damned” because she is not chaste or coy.

It could also allude to Biblical narratives and beliefs.

Furthermore, The Cursed Woman by Tassaert meaning has been explored by scholars in terms of gender and eroticism, some stating that women often do not have the choice about their “sexual partners” and that women are shamed more so than men when engaging in intercourse. In this painting, we see the woman has full autonomy over her pleasure and who she engages it with.

It is important to note there is not a wide scope of scholarly information or formal analysis regarding The Cursed Woman painting by Octave Tassaert. However, we will attempt to provide a brief outline of some of its stylistic details below. 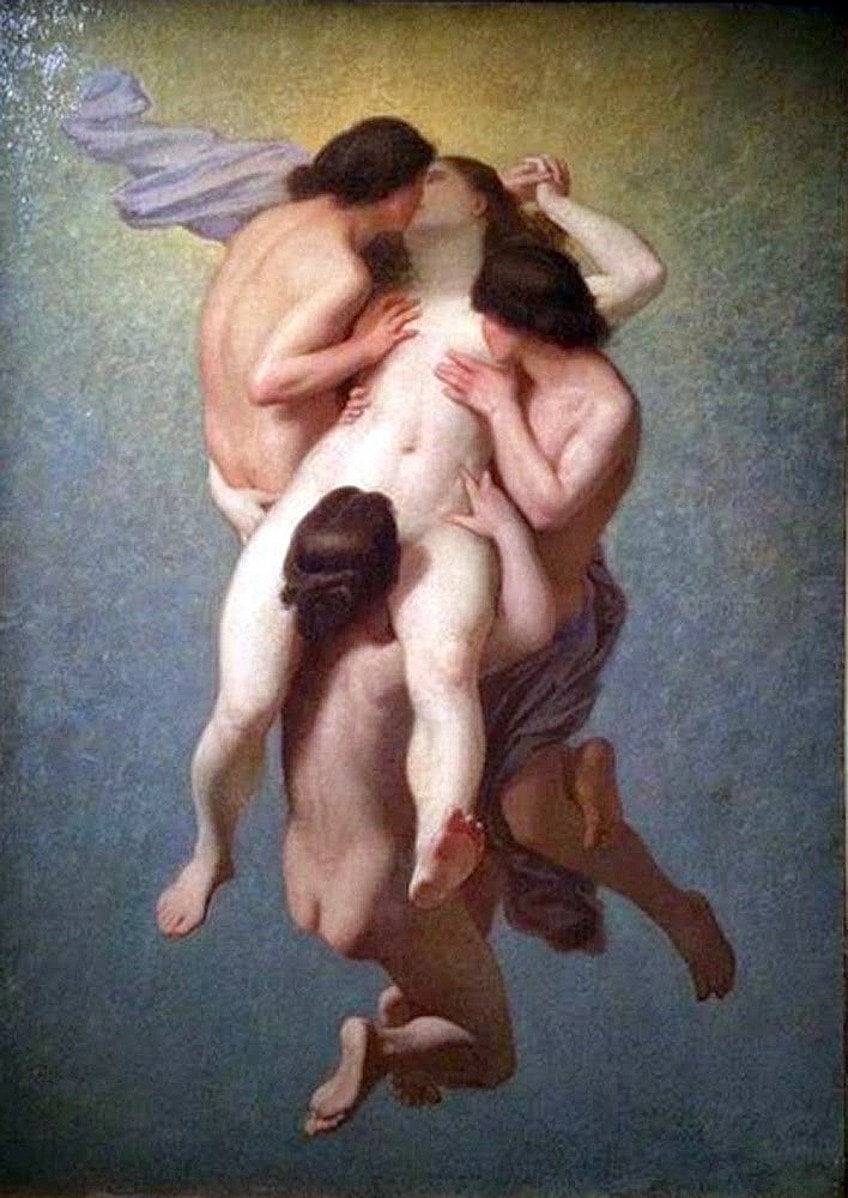 In The Cursed Woman painting, there are four centralized nude female figures, or what appears to be female. The central figure is depicted in the throes of sexual pleasure, which is given to her by the three female figures holding on to her body, and kissing her on various areas of her body. We cannot see their faces.

These figures are placed in different positions alongside the central figure, namely, one to her right, to her left, and below her, between her legs.

The women appear to be floating in an unknown space, and this is further highlighted by the purple piece of drapery in the upper left part of the composition, floating as if there is a gentle breeze. This is also the only item of clothing in the painting, and it is partially covering the left hip and upper front leg of the figure to our right. 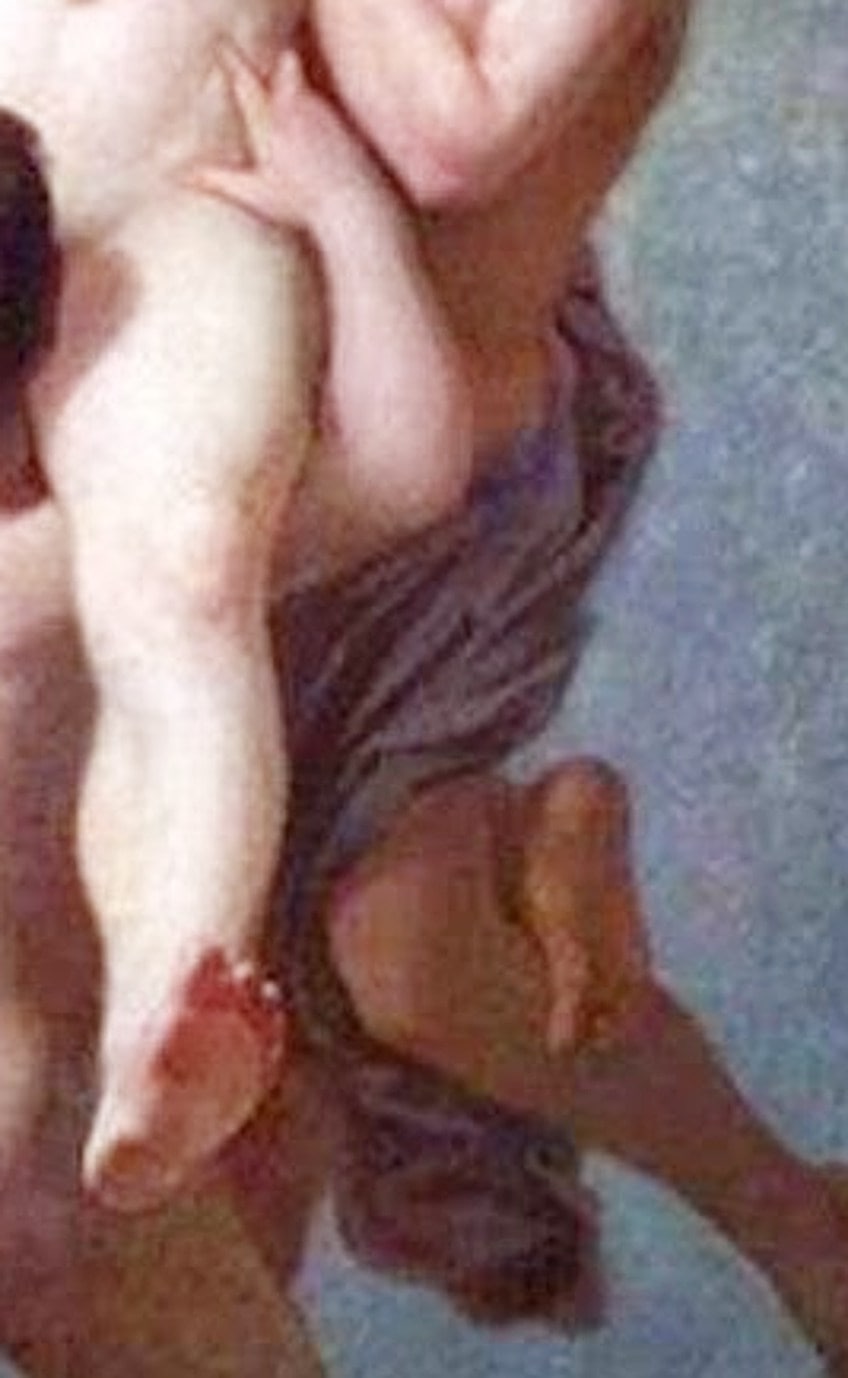 The overall color scheme of The Cursed Woman painting appears softened and not too contrasting. There are pastel purples, yellows, and blues, as well as the soft pale skin tones of the figures. Their hair is dark brown, which creates a harmonious contrast of color.

Furthermore, the central female figure’s skin is notably starker in its tone compared to the other three figures. It is almost as if there is an unknown light source highlighting her as the focal point. 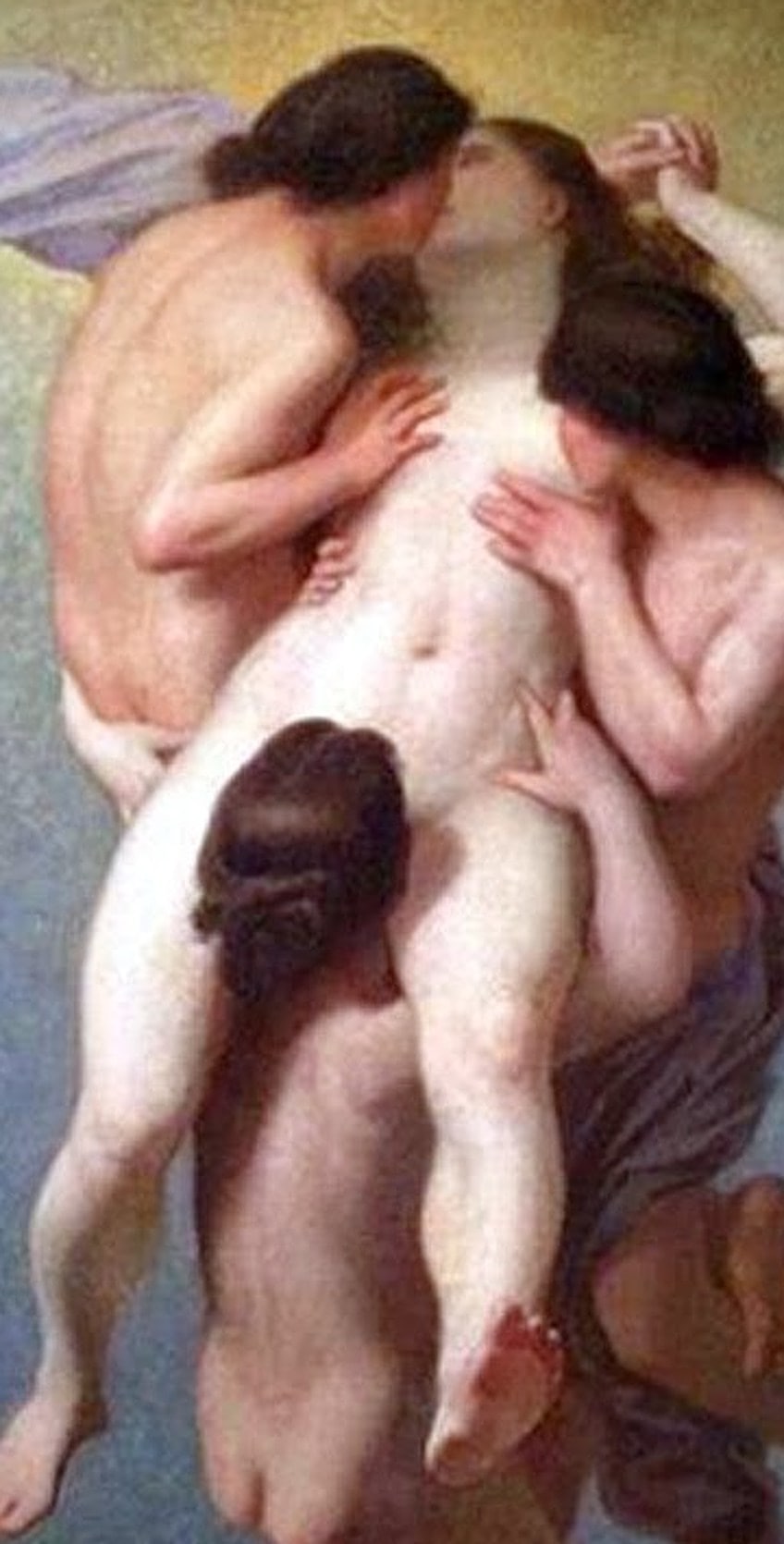 Notice how Tassaert depicted the play of light and shadow on the lower figure’s foot.

There is a commingling of different lines and shapes as the figures intertwine in their act of pleasure. We will notice a dominance of curved and diagonal lines as the bodies curve and writhe along with their open space, giving their bodies shape and muscular contour.

An example of this line includes the long spinal curve of the figure to our left of the composition. 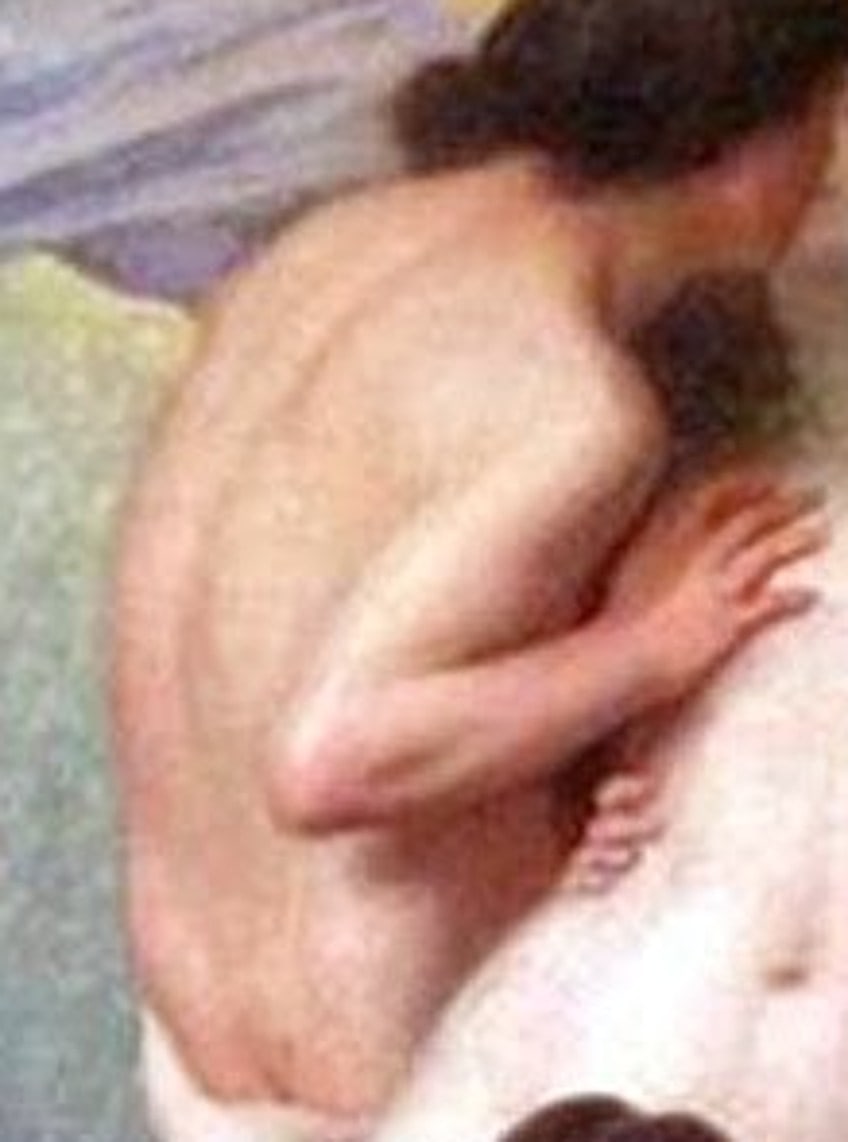 The various play of shadow and light enhance the three-dimensionality of the figures’ forms, which also appear voluptuous and characteristic of female nudes of the time, reminiscent also of the classical portrayal of the female form.

While The Cursed Woman (1859) story is somewhat unclear in its context and elusive in terms of art historical research and analysis, also lacking significant information from the artist, Octave Tassaert himself, and why he painted it, it is nonetheless a 19th-century French painting with seemingly many different interpretations.

We are given a scene stoking the flames of sexual arousal and eroticism as if the four figures are ever turning upwards in a space unbeknownst to us, the viewers. Whether the central female figure is “damned” for her great lasciviousness or not, we can say that this is undoubtedly a curse questioned by not only 19th-century but 21st-century viewers.

Take a look at our The Cursed Woman painting webstory here!

Who Painted The Cursed Woman?

The French artist Octave Tassaert painted The Cursed Woman in 1859. He was famous for painting sexually overt scenes as well as scenes depicting poverty, homelessness, death, and despair.

What Is The Cursed Woman Painting About?

It is unclear what The Cursed Woman (1859) by Tassaert meaning is, as there is no extensive information about this painting. However, numerous scholars have debated that it can relate to gender roles and eroticism in 19th-century Parisian society, possibly depicting a moment of heightened sexual pleasure within the context of the figures being from a mythological narrative, as well as alluding to Biblical narratives and stories about women and sexuality.

Where Is The Cursed Woman Painting Now?

There is minimal information available about The Cursed Woman (1859) by Octave Tassaert, as well as on who bought it. The artist reportedly sold many of his artworks in 1863 to Père Martin, while some of his other artworks were collected by others.