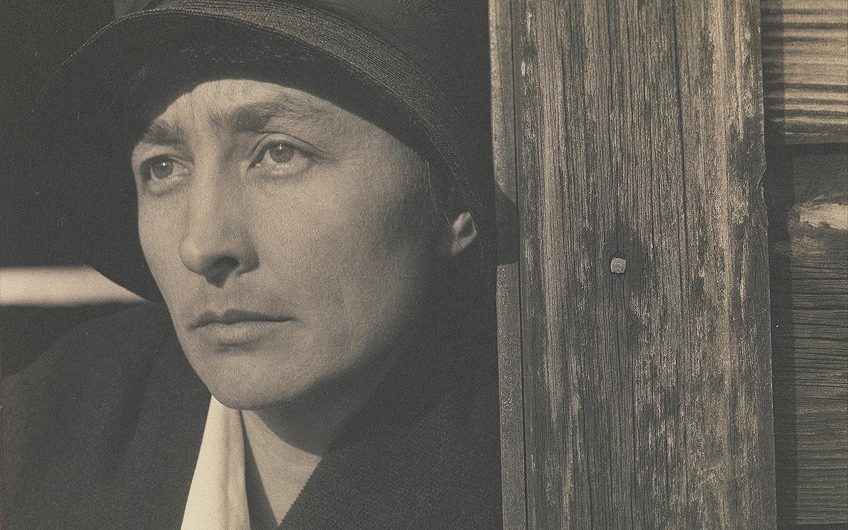 Georgia O’Keeffe is famously described as the “Mother of Modernism”; she was one of the most prominent female artists during the 1900s, inspired by natural landscapes. Among these is her Sky Above Clouds IV (1965), which is the painting that will be discussed in this article.

Artist Abstract: Who Was Georgia O’Keeffe?

Georgia O’Keeffe’s date of birth was November 15, 1887, and her date of death was March 6, 1986. She was born in Sun Prairie Wisconsin, in the United States of America, and started art from a young age. Notably, she studied at the School of the Art Institute of Chicago in Chicago as well as at the Art Students League in New York City. She was also an art teacher at institutions like Columbia College and West Texas A&M University. She married Alfred Stieglitz in 1924, who died in 1946, and he also exposed her to the art world.

She became known as the “Mother of American Modernism” and explored subject matter that would often be of flowers and landscapes.

Her compositions were often portrayed as close-ups, which depicted subject matter as more abstract shapes. Prominent artworks by Georgia O’Keeffe include Black Iris (1926) and Cow’s Skull: Red, White and Blue (1931). 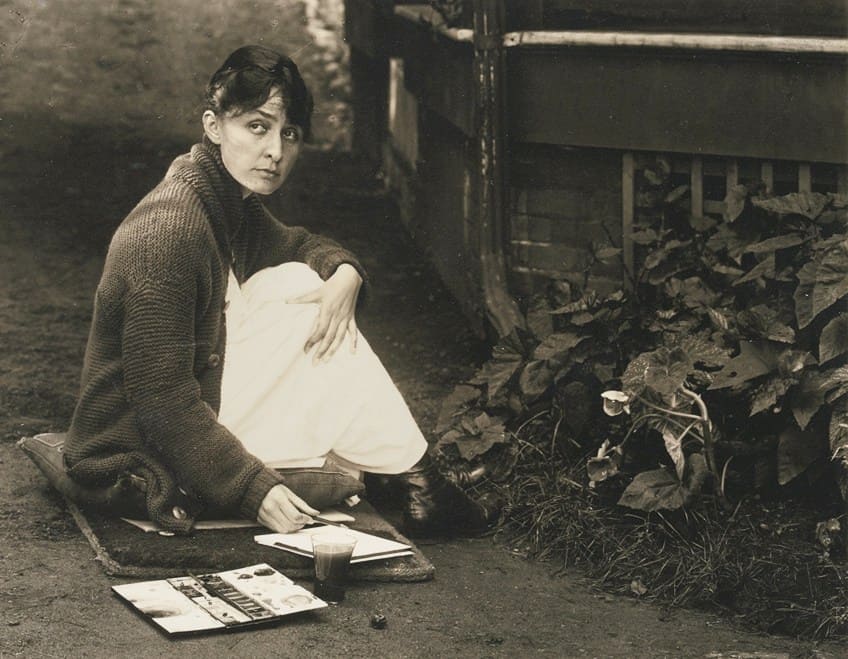 Photograph by Alfred Stieglitz of Georgia O’Keeffe, seen nestled on a cushion on the ground, with her sketchpad and watercolors by her side, 1918; Alfred Stieglitz, Public domain, via Wikimedia Commons

In the article below, we will discuss the Sky Above Clouds analysis by Georgia O’Keeffe, taking a closer look at why she painted it as a series as well as discussing the last painting, specifically Sky Above Clouds IV (1965), in more detail in a formal analysis.

O’Keeffe was in her 70s when she created her cloudscapes.

Georgia O’Keeffe was inspired by the clouds and sky she observed while she traveled in an airplane to various countries like the Far East and Europe, and others. Additionally, it was the first time for her and was reported during the 1950s to the 1970s, which was also a time when air travel was still a novel experience. 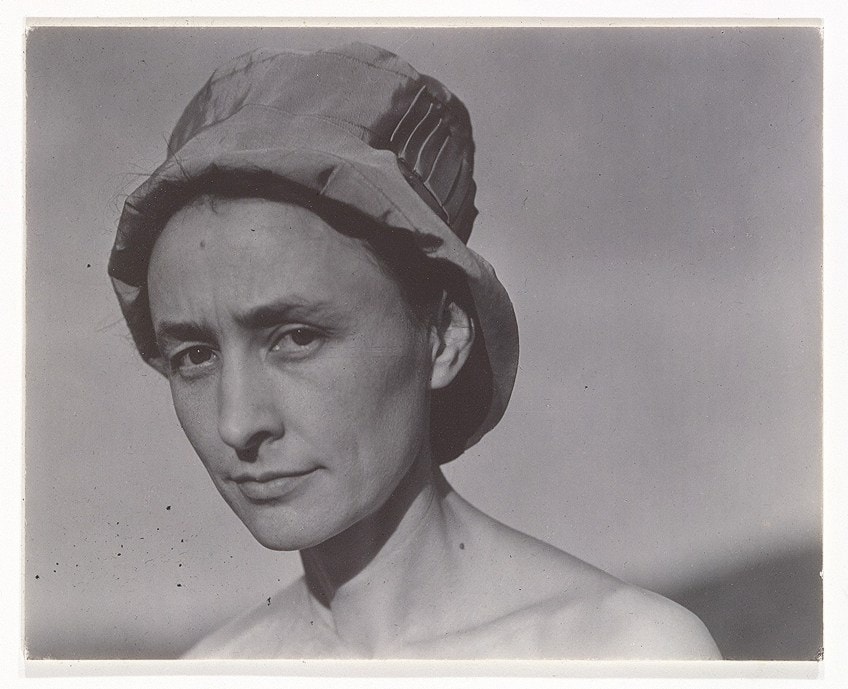 Sky Above Clouds IV measures around 24 feet in width and was a grand undertaking for Georgia O’Keeffe, so much so that it was kept on loan and gifted to the Art Institute of Chicago and reportedly could not be displayed at, what was planned, the San Francisco Museum of Art during the “Georgia O’Keeffe Retrospective Exhibition” in 1970.

It was also displayed at the Whitney Museum of American Art in New York.

Georgia O’Keeffe is famously, and often, quoted about her process of creating Sky Above Clouds IV, which reportedly she started working on from “six a.m. till eight or nine at night” in the garage, where there was no heat. Nonetheless, O’Keeffe created it regardless of the size, describing: “I had it in my head as something I wanted to do for a couple of years”. 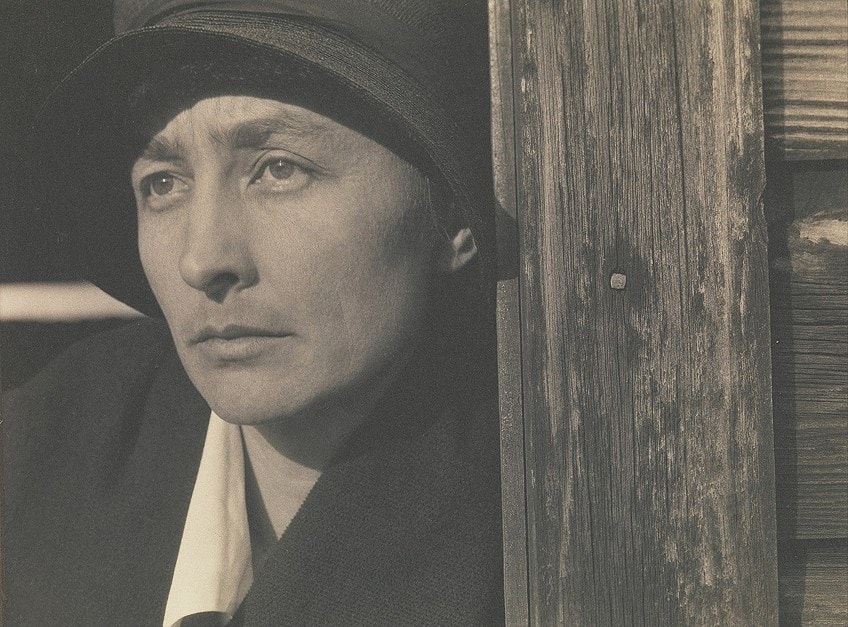 The Georgia O’Keeffe clouds painting that was made before this, specifically her first three iterations, also included the high horizon line that composed the top third portion of her canvas as well as the different cloud shapes arranged around two-thirds of the composition.

However, these paintings were not as large as her fourth version and the difference is evident from photographs taken of the artist standing next to her paintings, which can be viewed in the online collection of the Georgia O’Keeffe Museum.

In the formal analysis below, we will discuss Sky Above Clouds IV by Georgia O’Keeffe in more depth, starting with a visual description, which will be followed by a closer discussion of her art style classified according to the art elements, color, texture, line, shape, form, and space.

In the fourth oil on canvas, Sky Above Clouds by Georgia O’Keeffe has been described as a “mural” and depicts a large expanse of the blue sky with numerous, almost cylindrical, shapes of different sizes horizontally arranged next to one another in rows that extend all along into the blue background of the sky. The clouds in the foreground appear clearer in view and become hazier as it moves further into the background as if covered by a subtle white cloudy fog.

These are the clouds spotting the sky as they would when viewed from an airplane window. However, Georgia O’Keeffe depicted them as she saw them, which appears more simplified and simultaneously abstract in that simplification. Despite this, we, the viewers, are able to ascertain its representational qualities, which are cloud formations in the sky.

These shapes, the clouds, continue all the way into the distance of the composition, filling up around two-thirds of the canvas. The top-third portion of the canvas depicts more of a hazy and soft beige-pink stretch of the sky without any clouds; the horizon line is also described as being placed “high”.

Sky Above Clouds IV by Georgia O’Keeffe depicts implied texture, for example, the clouds, which have soft edges and appear light in weight. The sky in the background appears hazy and smooth – visually how the sky appears when flying above the clouds in an airplane.

The colors in this fourth iteration of Sky Above Clouds by Georgia O’Keeffe consist of pastel pinks and blues as well as neutral colors like white for the clouds. There is a color harmony created by the lightness of the hues.

There is no stark contrast of colors, however, subtle contrast is created by the gradations of blue in the lower section, which appears darker and becomes lighter towards the upper section.

The dominant line in Sky Above Clouds IV by Georgia O’Keeffe is horizontal, depicted by the long horizon line that composes the upper third portion of the composition as well as the various shorter lines as the edges of the clouds, which are implied without visible outlines. There are also lines implied by the atmospheric layers above the clouds.

Shape, which is based on two dimensions, creates a dominant part of the fourth version of Sky Above Clouds by Georgia O’Keeffe. This comes mainly from the shapes of the clouds, which are almost abstract and cylindrical amoeboid shapes. All the clouds are unconnected and there are thin and small gaps in between revealing the sky.

Additionally, while form is related to three dimensions, “Sky Above Clouds IV” is dominantly two-dimensional.

The compositional space is filled by the white clouds, which could be considered the positive space and the negative space could be the blue sky around it. Additionally, Georgia O’Keeffe created visual depth through scale and color. For example, the clouds are larger in the foreground and smaller in the background, conveying the vastness of the cloudscape, which is also accentuated by the higher horizon line and the white haziness (or dullness) toward the background.

Georgia O’Keeffe: Heart in the Clouds

In this article we explored the painting series Sky Above Clouds analysis, also discussing one of the paintings from that series titled Sky Above Clouds IV. While there is seemingly nothing more to see in this famous Georgia O’Keeffe cloud painting, only multiple rows of white shapes (clouds) spotting the sky, and an elevated vantage point showing the world above, nonetheless the canvas is filled with the inspired subject matter.

This was Georgia O’Keeffe’s inspiration visualized, the vestiges of the sky above the clouds brought down to earth, as well as her vantage point from the airplane seat that she took with her when she landed. She has shown us, the world, a viewpoint that undoubtedly imprinted awe and wonder in her, and the largeness of this canvas is a testament to that.

Who Painted Sky Above Clouds?

Modern artist Georgia O’Keeffe painted the Sky Above Clouds series during the 1960s, which consists of several versions she painted around the theme of the sky and clouds from an airplane vantage point when she traveled to different countries.

What Inspired Sky Above Clouds by Georgia O’Keeffe?

The Georgia O’Keeffe clouds painting was inspired by her experiences from airplane travel during the 1950s to 1970s. She was moved by the way the sky and clouds appeared from the high viewpoint, offering a unique new way of seeing the world, which she portrayed in her artworks.

Georgia O’Keeffe’s art was characterized by subject matter that consisted of landscapes, flowers, and other objects that she would portray in abstract as well as detailed ways, often creating close views and focusing on art elements like color, shape, and lines. 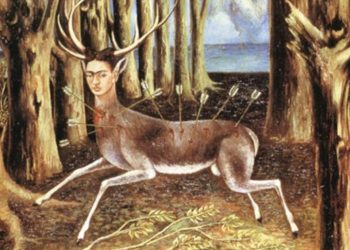