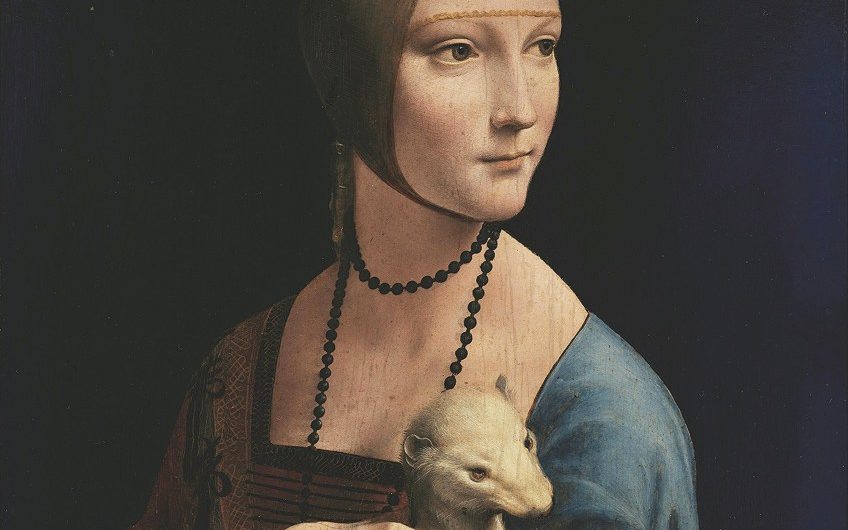 The famous lady holding a ferret painting Lady With an Ermine (1489-1491) by Leonardo da Vinci is one of his female portraits depicting beauty as well as mystery. This is the painting that we will be discussing in this article.

Leonardo da Vinci was and still is a well-known High Renaissance artist, he was highly talented and skilled in many disciplines, a so-called polymath. His birth date was April 1452 and he died in May 1519; he was from the Italian city of Vinci, which is in Florence.

Da Vinci was known as a polymath and a genius; he was a painter, drawer, sculptor, scientist, inventor, architect, draughtsman, and engineer, among others. 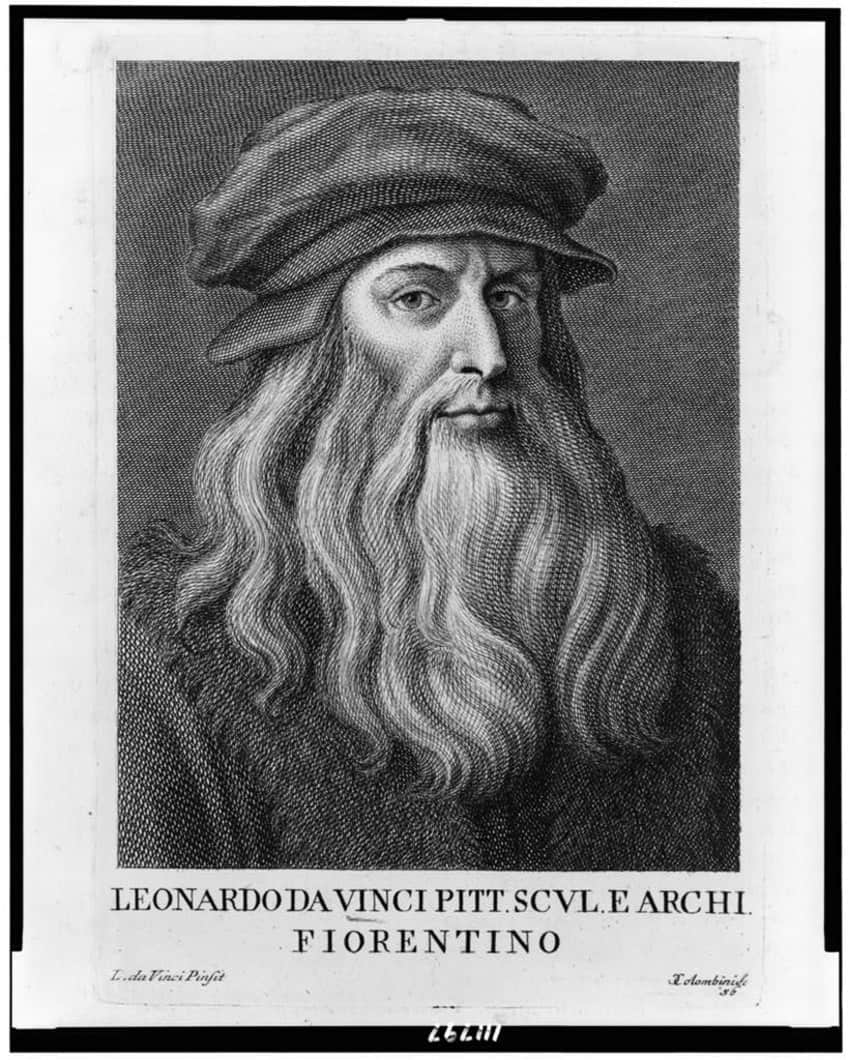 Below, we will look at the Lady With an Ermine analysis, discussing who the lady holding a ferret is as well as why Leonardo da Vinci painted it. This will be followed by discussing the subject matter in greater detail as well as the stylistic applications according to the art elements and principles.

The famous painting of a lady holding a ferret is none other than Lady With an Ermine by Leonardo da Vinci, which was painted during 1489 to 1491. It was believed to be commissioned by Ludovico Sforza, who was the Duke of Milan from 1494 to 1498, who Da Vinci also worked for as a court painter when he moved to Milan from 1482 to 1499.

Da Vinci also created sculptures for the Duke of Milan.

A famous example is Leonardo’s Horse, a project commissioned in 1482, which was a bronze sculpture of a large horse, reportedly around 26 feet high. However, it was not completed due to war. During this time, Leonardo da Vinci also produced the famous fresco The Last Supper (c. 1495-1498), which was commissioned by Ludovico Sforza for the dining hall of the Santa Maria Delle Grazie. 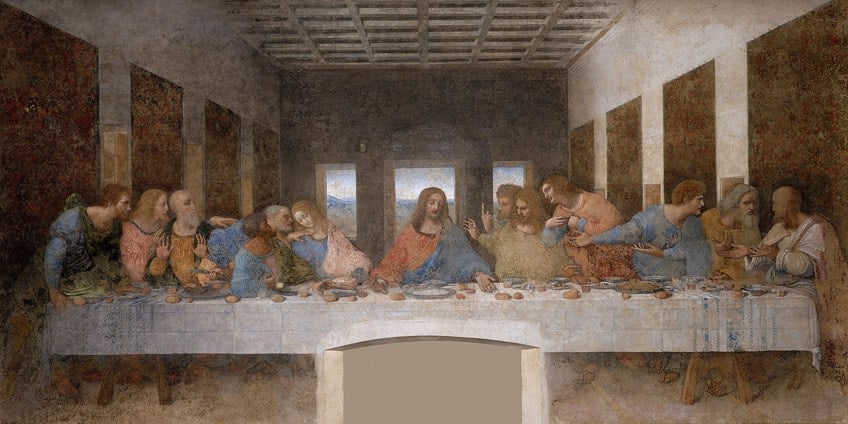 Apart from Leonardo da Vinci’s time in Milan and working on commissions for the Ludovico Sforza, it is interesting to note that he reportedly painted only four portraits of women, which includes Lady With an Ermine (housed at the Czartoryski Museum in Kraków, Poland).

Da Vinci only painted three more paintings after completing “Lady With an Ermine” between 1489 and 1491. 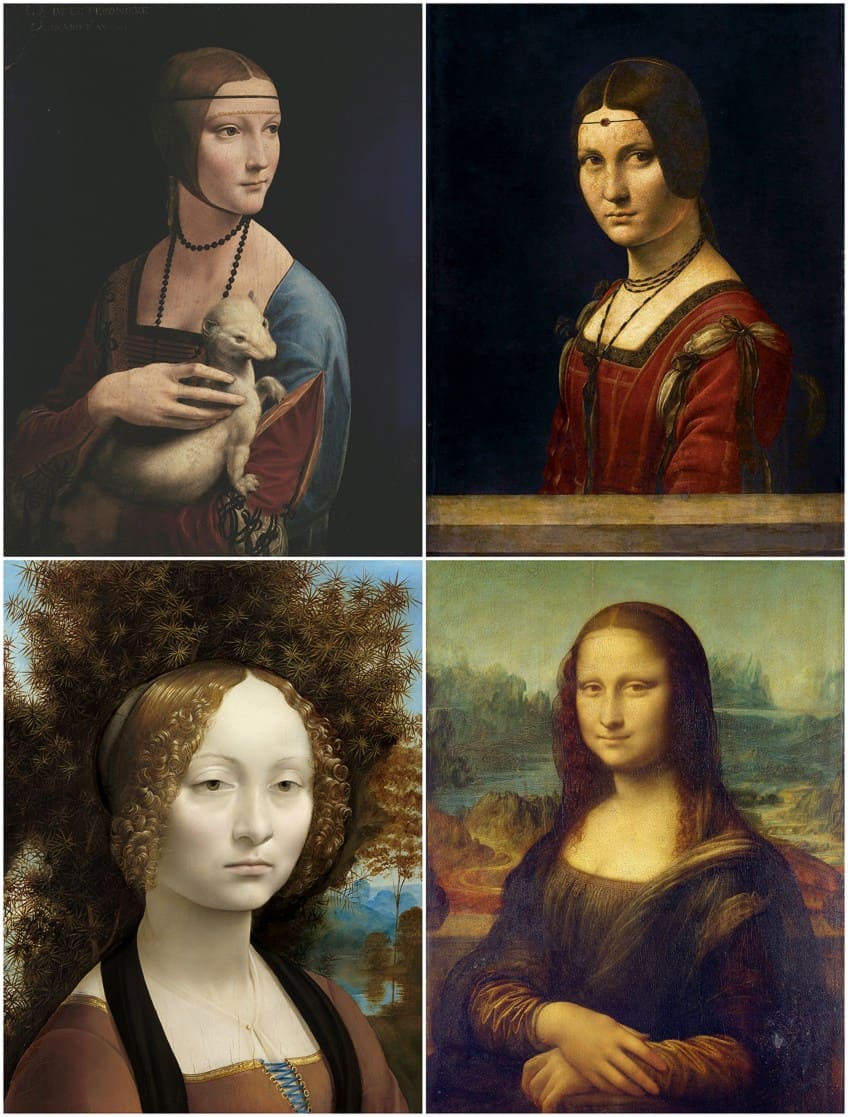 Who Was the Lady With an Ermine?

The woman believed to have been the model for the painting was Cecilia Gallerani. She was reportedly the mistress of Ludovico Sforza and posed for the painting when she was around 16 years old.  She was a learned woman, and many sources have described her as being able to speak Latin well, and write poetry, not to mention that she was also a musician.

Reportedly, Cecilia Gallerani was also pregnant when Leonardo da Vinci painted her for “Lady With an Ermine”. 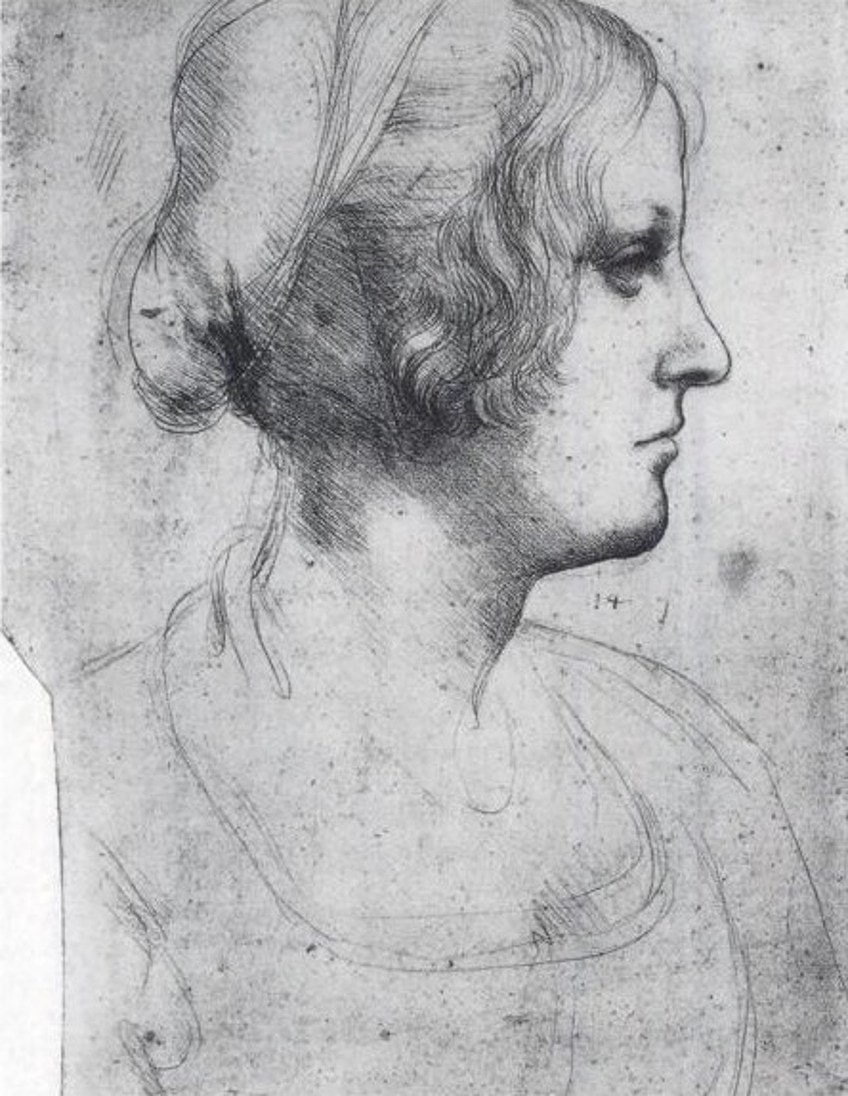 Below, we will look at Lady With an Ermine analysis starting with the subject matter and then exploring the stylistic details in terms of color, texture, line, shape, form, and space – these are known as the elements of art. We will also mention the principles of art, which act as “organizational” tools for the art elements.

The Lady With an Ermine by Leonardo da Vinci depicts the portrait of Cecilia Gallerani. She is depicted in a three-quarter posture, not quite in profile and not quite in full frontal; her body is turned slightly to her left side as her head is turned to her left (our right) gazing over her shoulder at an unknown viewpoint.

It appears as if she is looking at someone who may have caught her attention and there is a slight glimmer in her eyes. 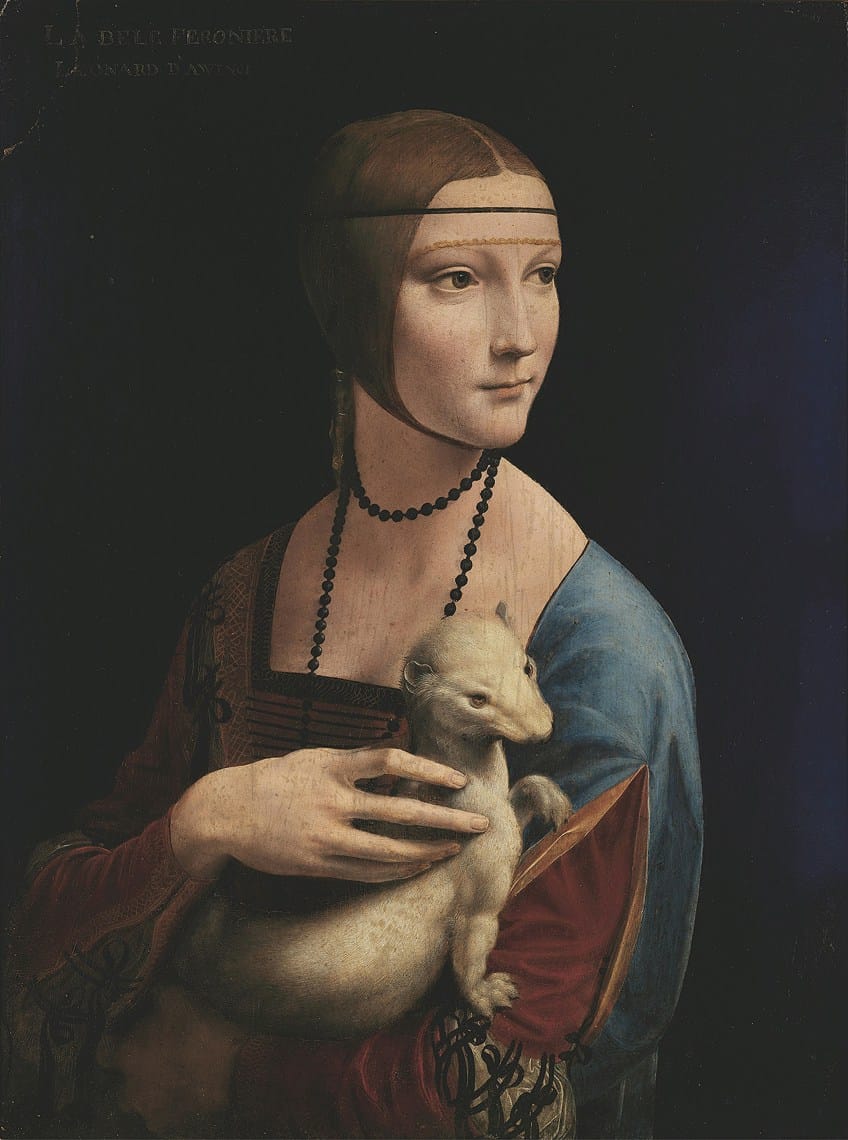 There is a thin black hair band (it has been described as a silk band) around her head and forehead. There is also a thin “gauze” veil, barely visible, with a golden trim that is just above her eyebrows. Her hair appears to be held under her chin, and she has a ponytail behind her head, specifically, a braid covered by a cloth. She is wearing a long necklace that doubles around her neck, almost appearing like a choker, and hangs just below her chest.

The necklace is made of what appears to be black beads, however, it has been questioned what exactly they are; some sources suggest they are “amber” or another type of stone. 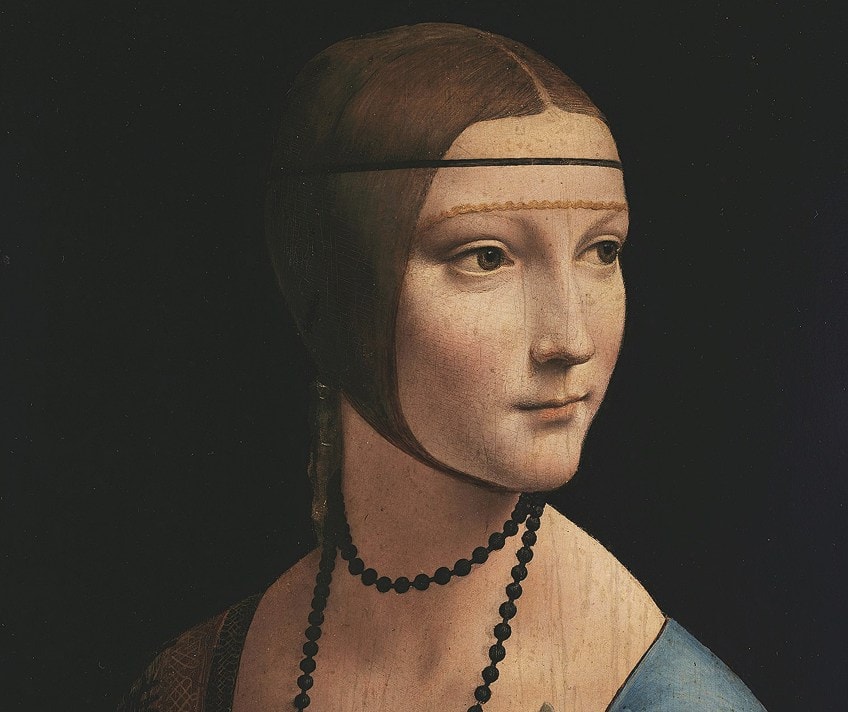 Her dress has been described as maroon in color and it is in a “Spanish” style. Over her left shoulder (our right) is a blue sbernia, which is a covering over her dress with an open split along the shoulder and upper arm. The part of her dress over her right shoulder (our left) reveals a golden embroidered pattern.

The woman is holding an animal in her hands, specifically an ermine, which has also been likened to a weasel or stoat. It is also looking in the same direction as her, seemingly distracted by something or someone. 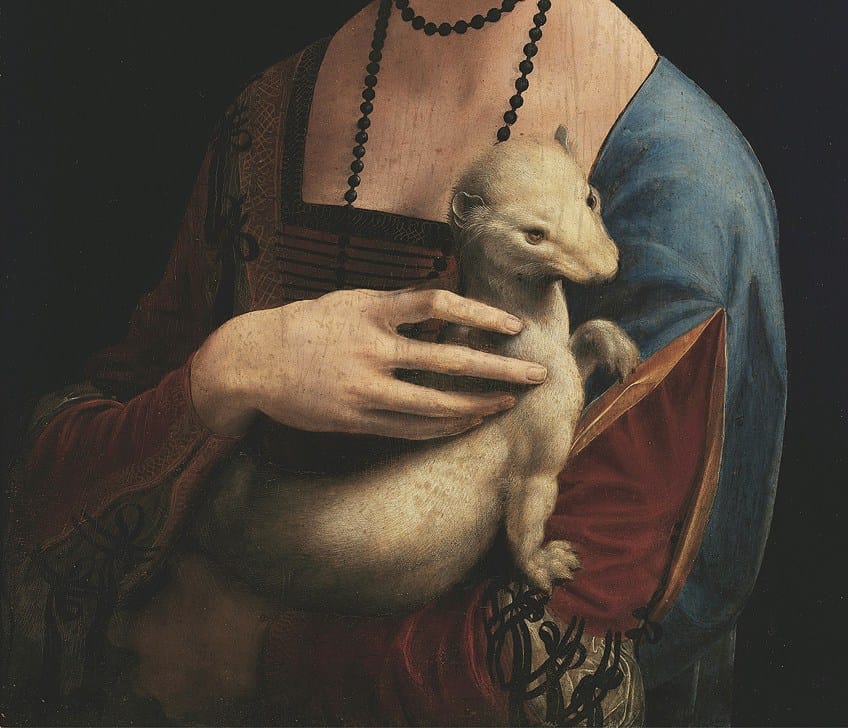 There have been numerous meanings associated with the ermine, and some of the more common interpretations are that it could have been a reference to Ludovico Sforza who reportedly had the nickname “Ermellino Bianco”, which means “White Ermine”.

This could have been because he was also part of what was the “Order of the Ermine”, which he became a part of in 1488.

Interestingly, when Leonardo da Vinci painted Lady With an Ermine, he reportedly only included the animal later in his process, and some scholars believe that he could have added it to refer to the Duke because he was Da Vinci’s patron. 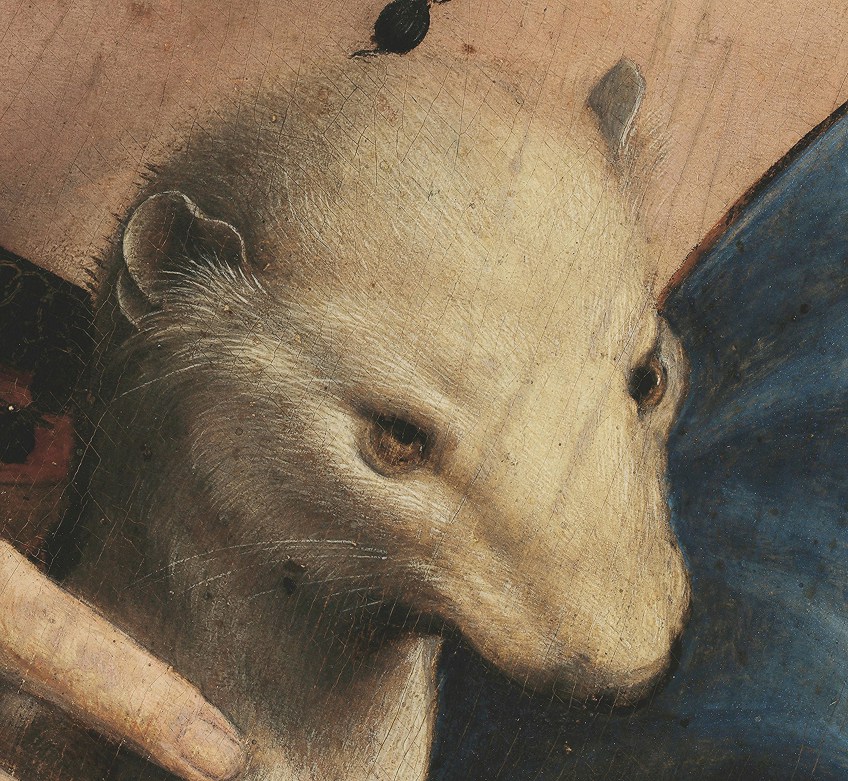 Others suggest that it was Cecilia Gallerani who wanted to allude to her involvement with the Duke of Milan. Furthermore, an underlying sensuality has been noted in the manner that Gallerani is stroking the ermine, which could refer to her love for the Duke of Milan.

Other meanings are that the ermine could possibly refer to the connection between Cecilia’s surname, Gallerani, and the connection to the word “ermine” in Greek. Additionally, the ermine was associated with “purity”.

Leonardo da Vinci is famously quoted from his notes describing the ermine as an animal of purity and moderation, stating that it “never eats, but once a day” and that it would prefer being “captured” than “take refuge in a dirty lair” so as not to “stain its purity”. 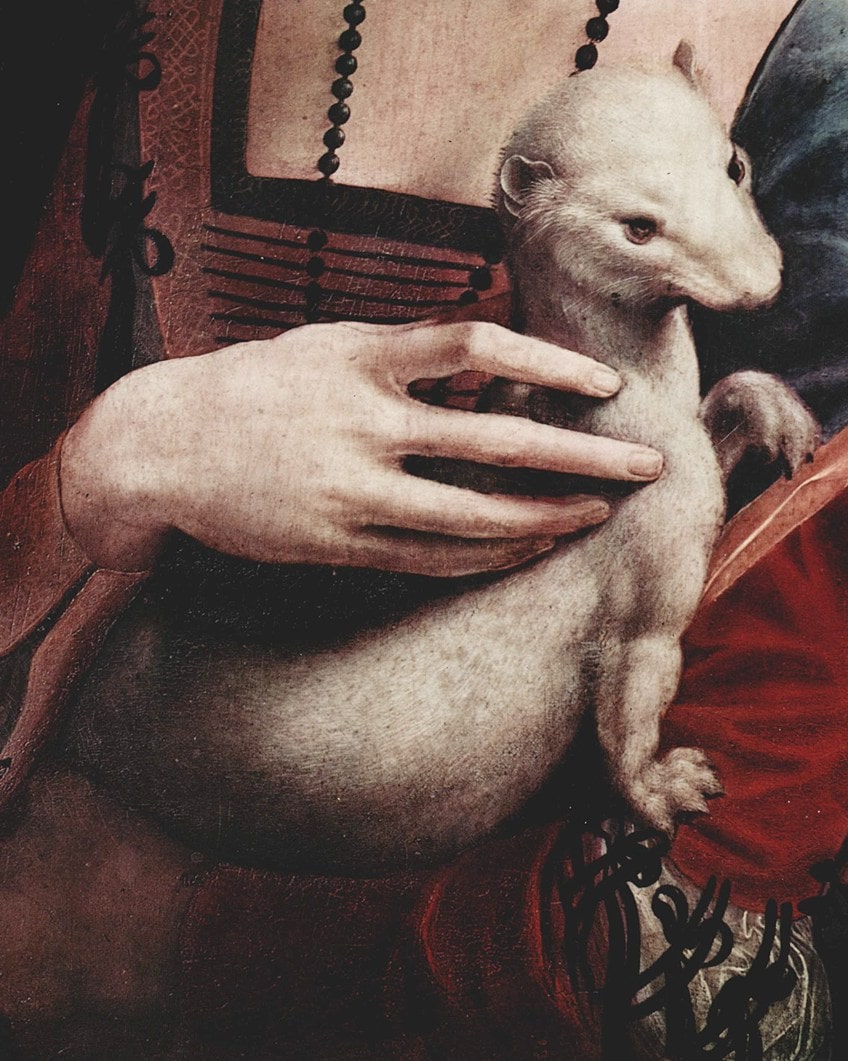 Lady With an Ermine by Leonardo da Vinci depicts soft blues and reds for the woman’s clothing, brown for her hair, a light/pale peach for the skin tone, which also echoes in the lightness of the ermine’s fur, as well as black for some of the decorative elements like her necklace and embroidery on her dress.

There is also color harmony and unity created due to the overall softened color scheme.

A light source is suggested from the right side of the composition, which provides more illumination to the woman’s left side (our right). Lighting up her blue dress as well as the ermine. The woman’s right side (our left) and the ermine’s back are more in shadow, which illustrates Da Vinci’s utilization of chiaroscuro, the contrast of light and dark colors. 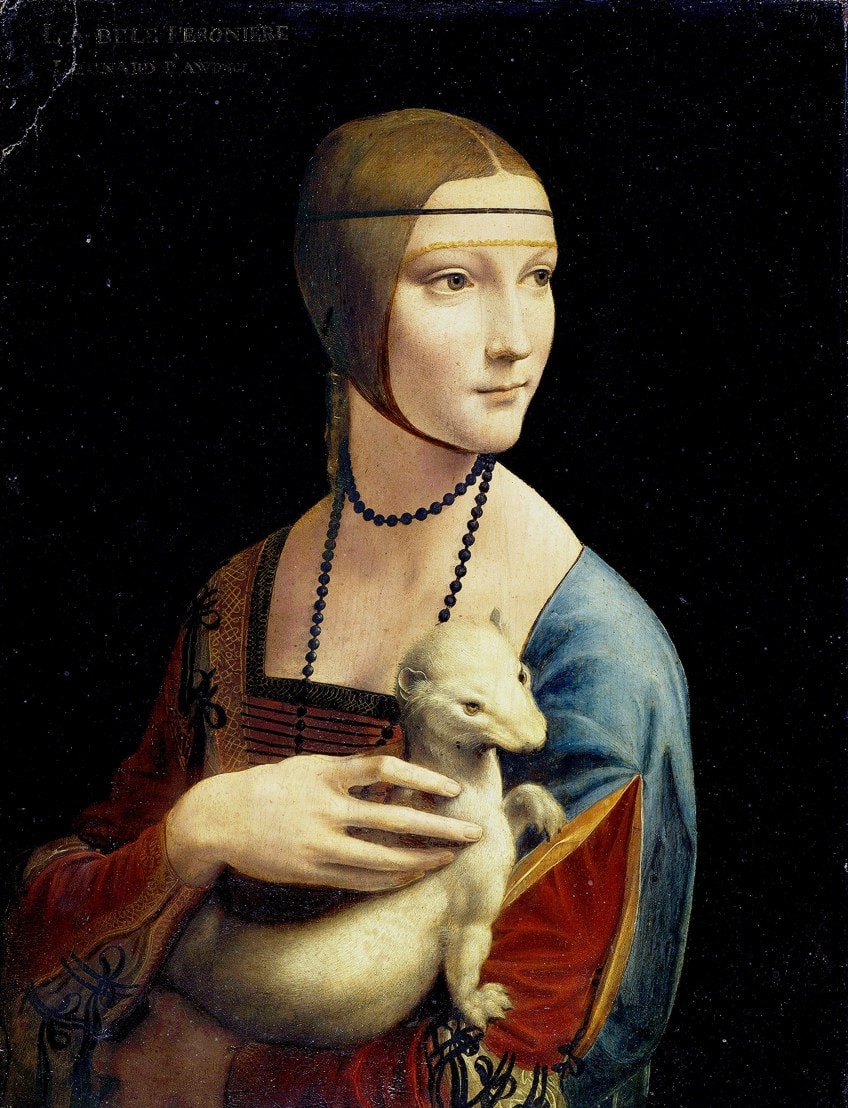 Leonardo da Vinci was the innovator of the technique called sfumato, which was the subtle and barely noticeable gradations of colors, contrasts, tones, and with brushstrokes applied with a skillful smoothness leaving the composition as naturalistic and realistic as possible. These are evident in Lady With an Ermine, such as in the faint variations or “gradations” of her skin color on her upper chest and neck. 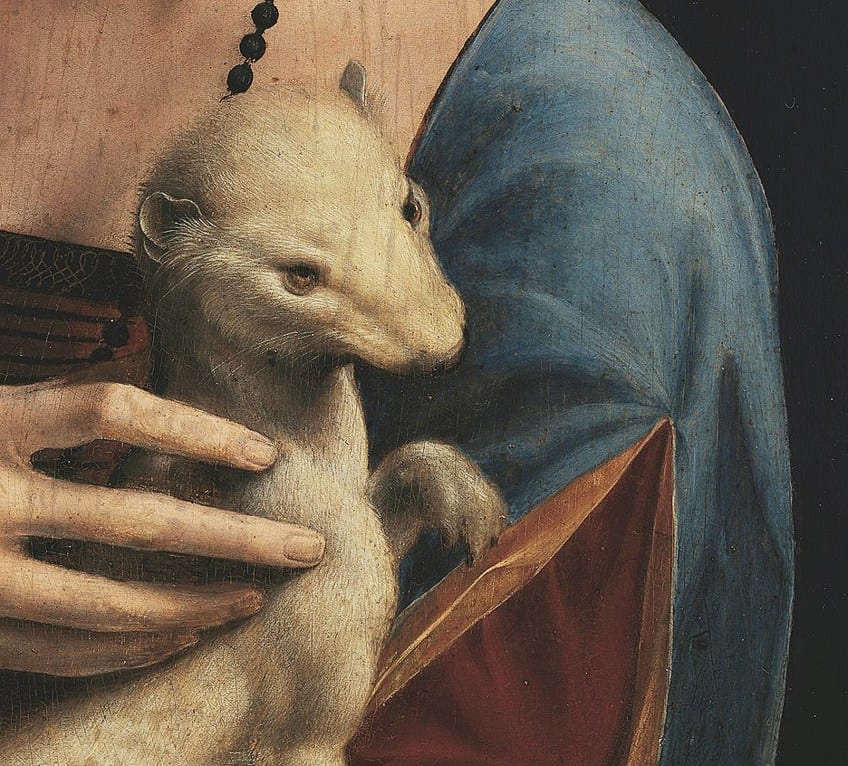 The Lady With an Ermine painting consists dominantly of organic lines, which are more naturalistic and fluid as it delineates the subject matter. There are curved lines created from the ermine’s body and the curved outlines of the woman’s facial structure.

There are also some diagonal lines created from the natural folds in the woman’s dress as well as more contrasted lines from the black headband and black necklace. 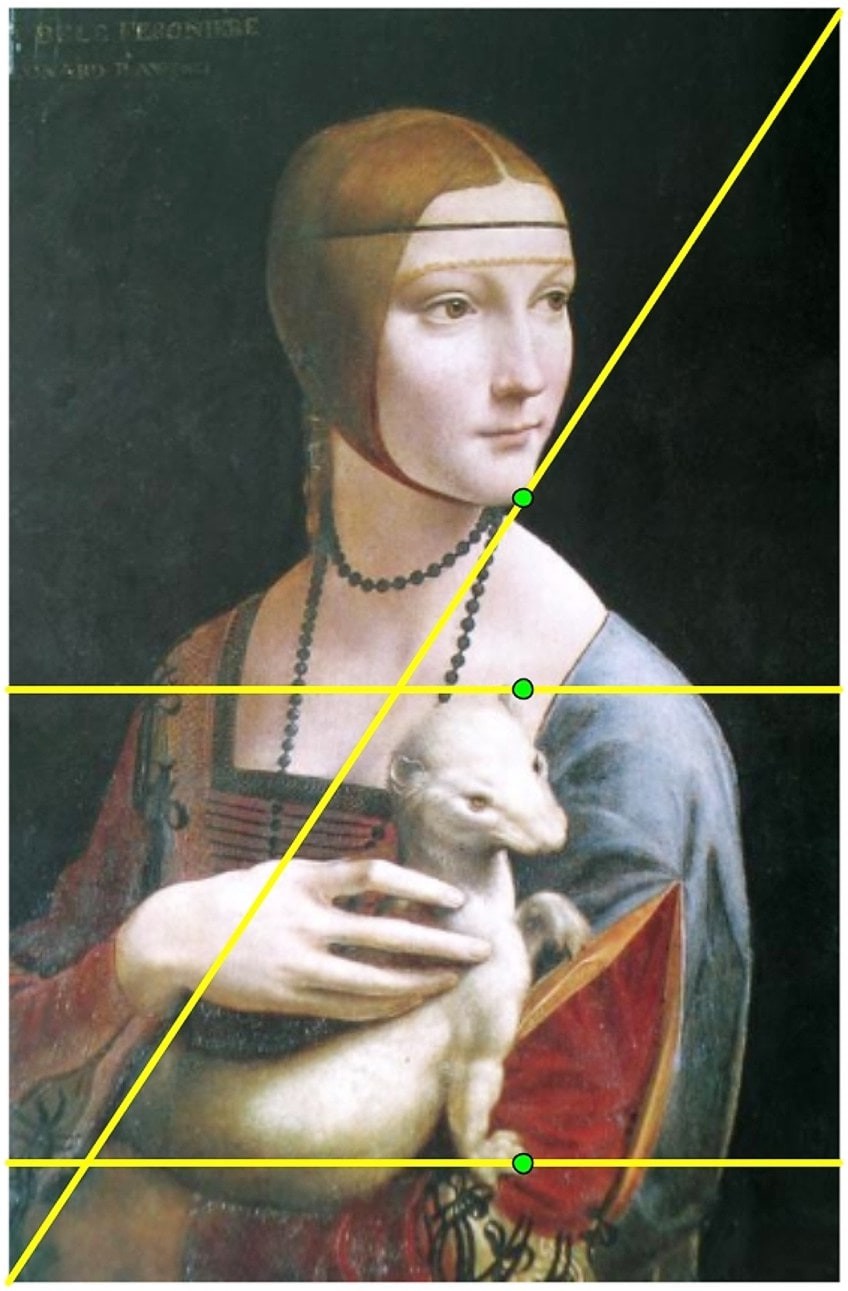 Lady With an Ermine painting also consists of organic forms, in other words, it is naturalistic without too many geometric shapes or forms that give it the appearance of artificiality. Although some sources have mentioned that the ermine is not exactly true to nature, nonetheless Leonardo da Vinci painted the animal with a keen eye for anatomical detail.

This is furthered by the detailing evident in the woman’s hand, as mentioned previously. 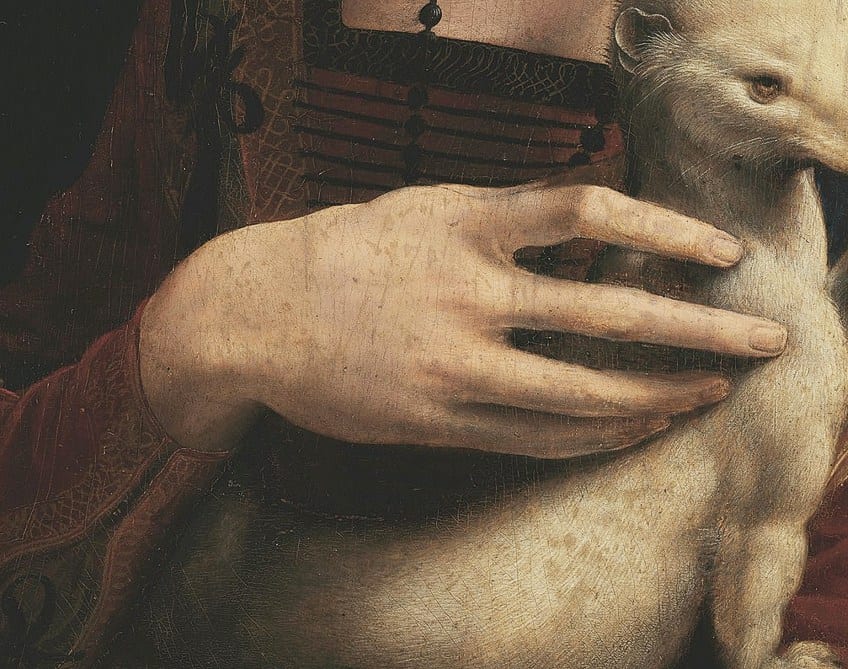 In Lady With an Ermine Leonardo da Vinci fills the compositional space with the figure of Cecilia Gallerani and the ermine in the foreground, which is the positive space; the background is black, which creates more focus on the primary figures, and becomes the negative space.

Da Vinci created a three-dimensionality through his chiaroscuro techniques, contrasts of dark and light, on his figures and implies another space that we, the viewers, cannot see, as seen by the way the woman is looking to her left (our right).

Interestingly, reportedly the background was a blue-gray color and painted over in black years later. Scientific studies, notably X-ray studies, suggest that there was also a window painted on the right-hand side during Da Vinci’s preparatory work for the composition. Furthermore, Da Vinci depicted Cecilia Gallerani’s right hand as quite large in proportion to her body, and some sources suggest that it could have been taken from one of his sketches studying human anatomy. 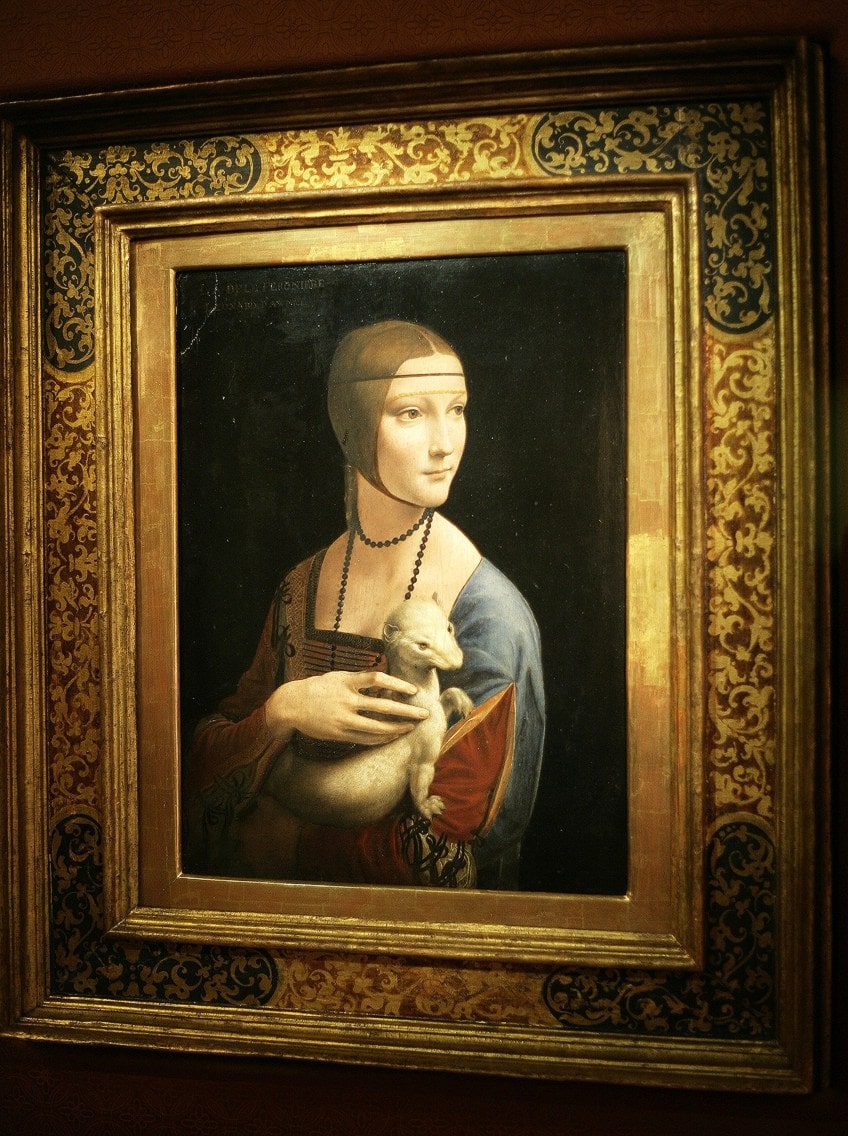 Lady With an Ermine (c. 1489-1491) by Leonardo da Vinci framed and on display in the Czartoryski collection of the National Museum in Kraków; Leonardo da Vinci, CC BY-SA 4.0, via Wikimedia Commons

In this article, we explored the dazzling lady holding a ferret painting, one we all have come to know: the Lady With an Ermine by Leonardo da Vinci. It is an unfolding mystery, and while we have only outlined some of the widely known and common mysteries associated with it, there is more where that came from.

You are encouraged to delve deeper into the world that Leonardo da Vinci created, not from each meticulous brushstroke or enigmatic gaze as we have seen in the Lady With an Ermine painting, but in the world, he fashioned when he was not standing behind the canvas, a world that filled his notebooks and studies, and that he undoubtedly the world that fashioned him.

Who Painted Lady With an Ermine?

The oil painting Lady With an Ermine (1489-1491) was created by Leonardo da Vinci, who was one of the master artists of the High Renaissance era. He reportedly painted four portraits of women during his art career.

What Is the Location of the Lady With an Ermine Painting?

The Lady With an Ermine (1489-1491) by Leonardo da Vinci is housed at the Czartoryski Museum in Kraków in Poland. Adam Jerzy Czartoryski bought it for his mother, who was Princess Izabela Czartoryska in 1798.

Who Is Portrayed in Lady With an Ermine?

The Lady With an Ermine (1489-1491) by Leonardo da Vinci depicts Cecilia Gallerani, who was the mistress of Ludovico Sforza, the Duke of Milan. 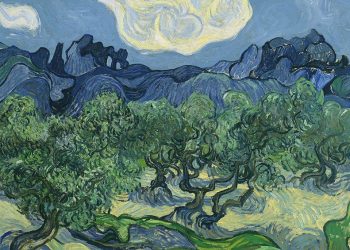