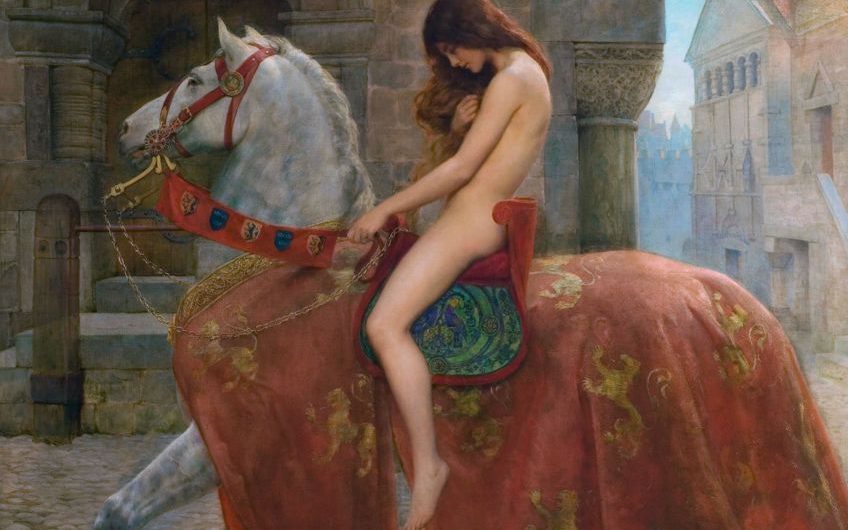 For thousands of years, horses have served an important role in human history, therefore, it is no surprise that humans have sought to depict horses in art. Horse painting artists first emerged in prehistory, depicting these magnificent creatures on the walls of their caves. Let us learn more about equine artwork by exploring the most famous horse paintings ever produced.

It is thought that certain nomadic societies in Eastern Europe tamed the horse as far back as 3,000 years ago. Horses rapidly became the most common mode of transportation for the majority of the world’s inhabitants, including Asia and Europe up to around 1,000 years ago. Horses have always been appreciated for their majesty, as well as the fact that they are extremely devoted to people and are among the most loved domestic species on the planet.

Many horse painting artists share this love for equines, hence why there are so many examples of horses in art. The painting of horses by famous artists is a genre that stretches back over many centuries, and will most likely continue for many years to come.

George Stubbs was a well-known British horse painting artist who specialized in animal portraiture. In 1762, he was invited to the Marquess of Rockingham’s rural residence in Yorkshire to study various species and produce various animal portraits. The Marquess of Rockingham owned the legendary racing horse – Whistlejacket. Stubbs painted Whistlejacket in a majestic position showing all his elegance and strength in his life-size masterwork. 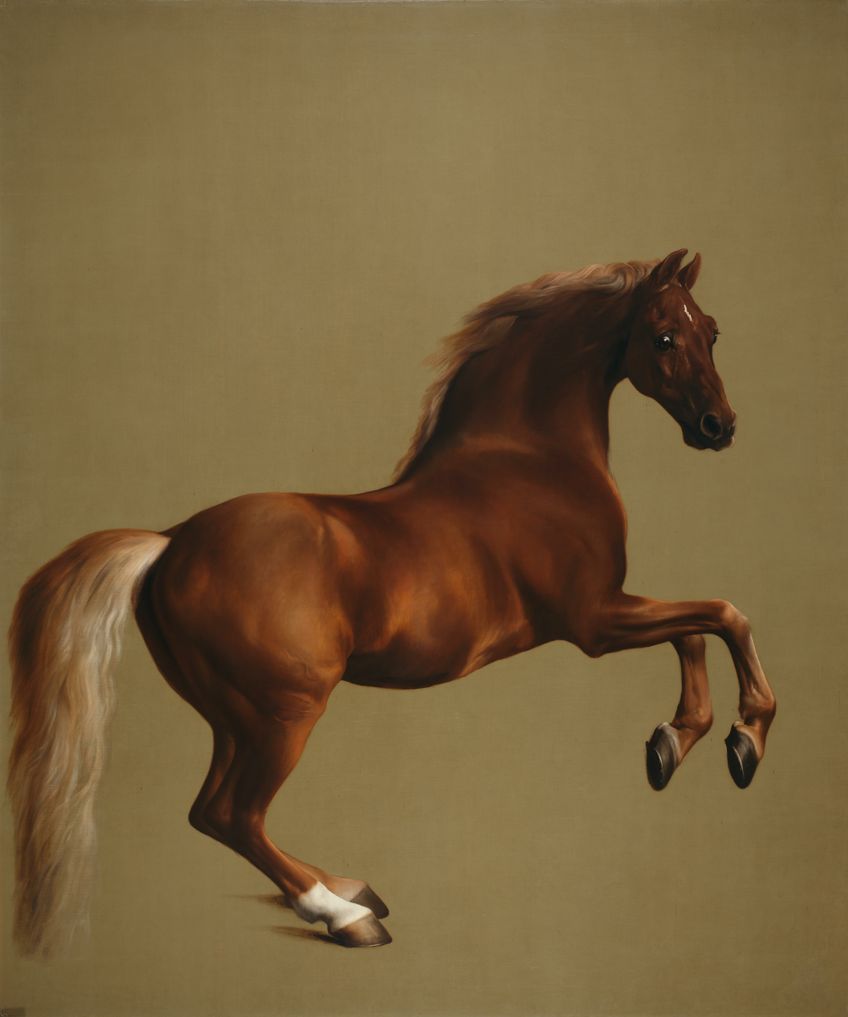 George Stubbs, unlike many other famous painters of his day, was a self-taught artist who learned how to create excellent paintings by examining other painters’ works in his formative years. His 1762 work Whistlejacket was arguably Stubbs’ most famous piece, and it is regarded by critics and historians alike as among the most famous horse paintings.

It had a solid background that focused the audience’s eyes entirely on this legendary racehorse.

Napoleon Bonaparte was Europe’s most powerful person in the late 18th and early 19th centuries. His forces had conquered most of the continent, and Napoleon had accomplished exploits that appeared impossible at the time. The great general’s march into the Swiss Alps to support his men in northern Italy was one such military feat. This was regarded as one of the most spectacular military operations of the era, and Napoleon’s stunning triumph over his adversaries in the region inspired our next horse artwork. 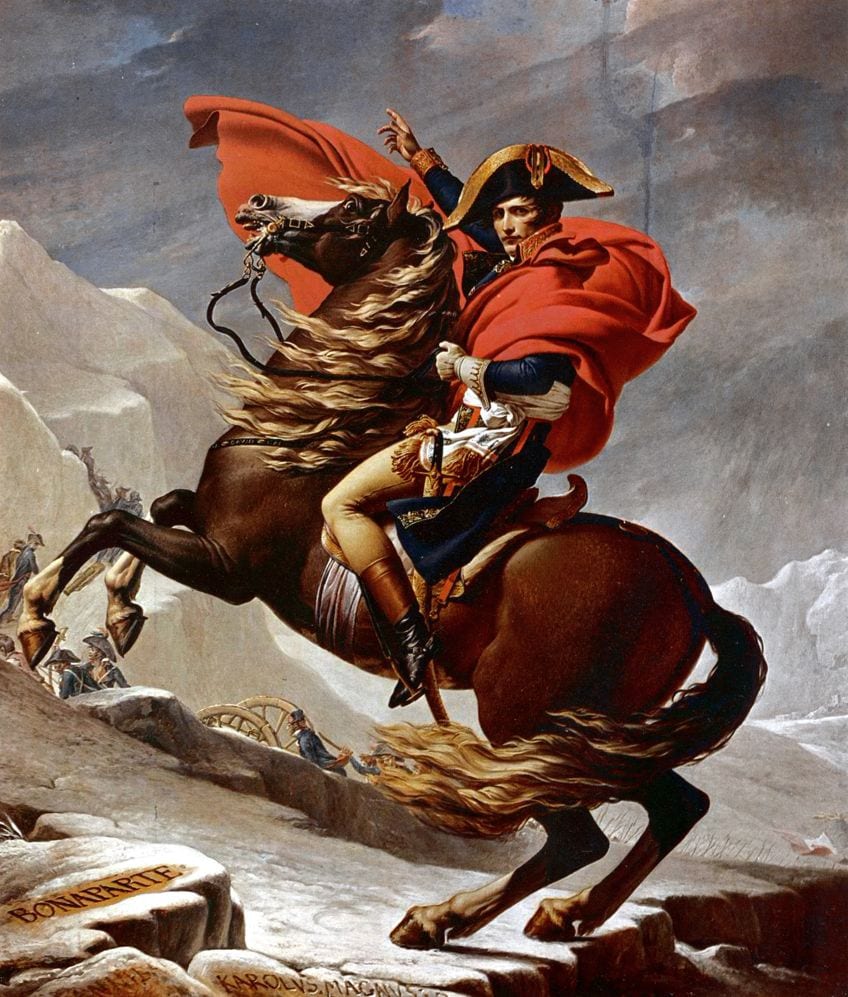 This specific painting was one of the artist’s most renowned works, as well as one of the most well-known examples of horses in art. Napoleon is seen riding a horse as he commands his troops toward the summits of the Swiss Alps. His men and artillery may be seen heading up into the rocky chasm that no previous big army had ever traversed during the winter.

Théodore Géricault was a prominent French artist in the early 19th century. It is believed that the artist was particularly captivated by horses and their elegant motions. He even worked briefly in the Versailles royal stables, where he got much more familiar with the many sorts of horses and their uses. It is among the most well-known works from his brief life. This piece portrayed a frantic horse race across a vast grassland, with four jockeys huddled together in a close pack. 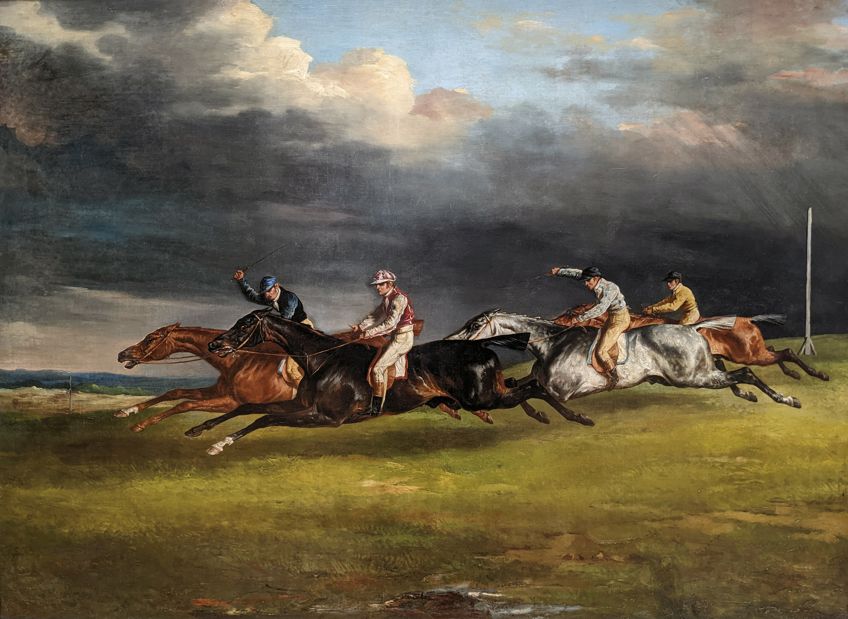 Géricault was an enthusiastic jockey himself, and it is reported that his worsening health near the end of his life was the result of many major riding injuries he had when riding at crazy speeds in perilous situations. This artwork is among the most famous horse paintings ever painted.

It was created for a well-known English horse owner and depicts one of his most renowned horses winning a tight race in the countryside.

Horse Frightened by a Thunderstorm (1829) by Eugène Delacroix

Eugène Delacroix played a significant role in the French Realism movement during the early 19th century. He created several works with horses along the seaside or in other locations from the 1800s. One of his most well-known pieces, which only portrays a horse, was completed in the mid-to-late 1820s and is said to have been influenced by works by Théodore Géricault. Delacroix’s picture depicts a darkened sky lit by lightning bolts that flicker in the clouds. A beautiful horse is represented as startled by the fierce storm, rising up in response to the thunder and lightning. This is among the very few watercolors believed to have been created by Delacroix during this time. 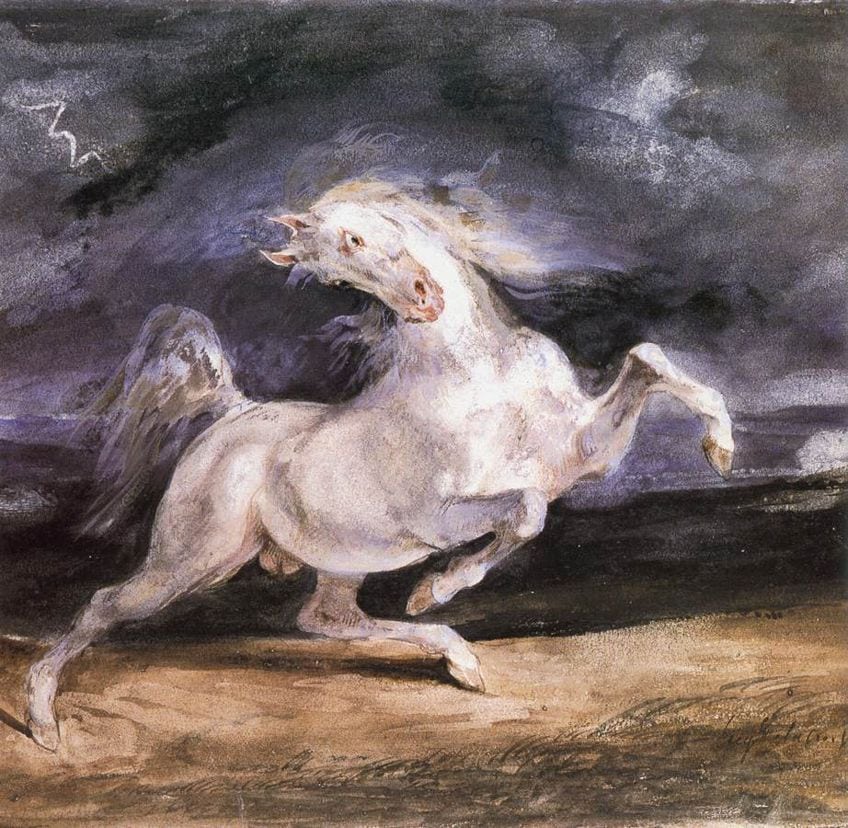 The artist spent a year and a half on location creating preliminary sketches for the painting, drawing inspiration from a variety of distinct masterworks. It received tremendous acclaim upon its Salon premiere in 1853. Furthermore, the painting exemplifies one of the age’s most influential genres. As a result, it influenced a slew of horse painting artists in the world, both modern and historical. It’s crucial to keep in mind that Rosa Bonheur was more than just a talented painter.

She was also a strong and self-reliant woman. Bonheur had already distinguished herself as an excellent artist, particularly of animals, by the time she began this remarkable painting. Her decision to show the Parisian horse market was therefore not surprising.

Nonetheless, the way she monumentalized the normal everyday moments through the subject matter is spectacular and vital. In other terms, the picture epitomizes 19th-century Realism.

The Parade, Race Horses in front of the Tribunes (1868) by Edgar Degas

Edgar Degas is considered by many to be one of the most important Impressionist painters. Many of his most renowned works include unusual situations and individuals that many reviewers felt unworthy of such a gifted artist’s consideration. During his lifetime, Edgar Degas painted several additional works that were considered masterpieces. 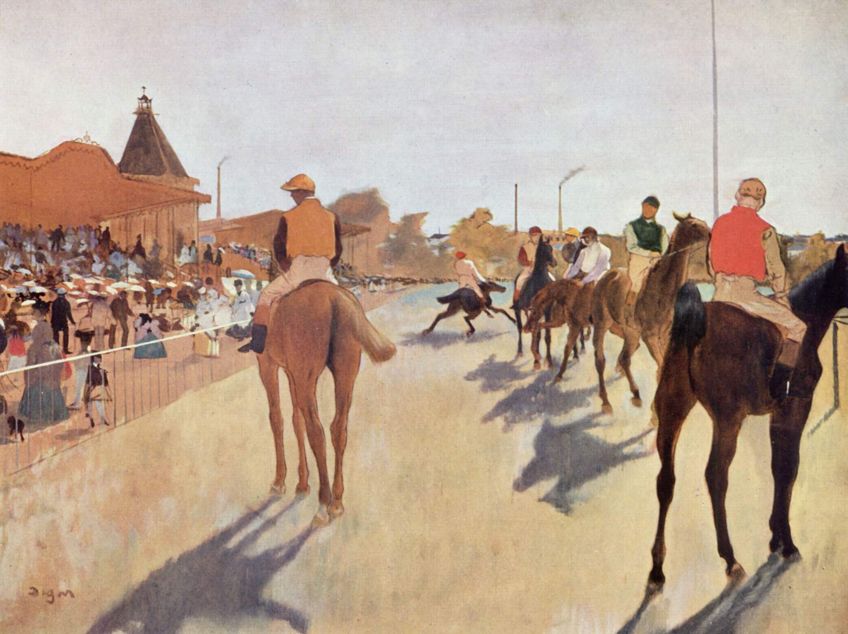 The Parade, Race Horses in front of the Tribunes (1868) by Edgar Degas; Edgar Degas, Public domain, via Wikimedia Commons

This image represents a group of thoroughbred racehorses getting ready to race at a renowned horse racing venue. The work is well-known among art critics as exemplifying Degas’ skill in creating a piece that expertly portrays the sun’s lighting influence on a setting in a way that was typical of the painter. This is a famous artwork that is frequently replicated and exhibited in horse racing societies in both the United States and Europe where the sport is immensely popular.

John Collier was a well-known English artist of the late 19th century and early 20th century. He is known to have made a variety of paintings depicting historical episodes and mythology from his own country of England. One of his most noteworthy works is a picture that depicts Collier’s rendition of Lady Godiva’s tale. The picture is centered on a depiction of a famous bride of the 13th-century Earl of Mercia. 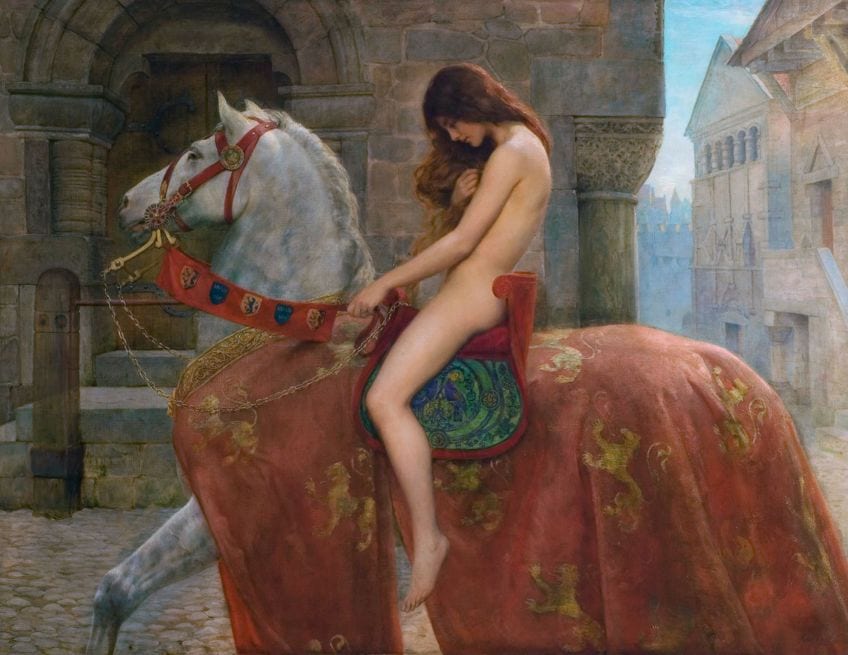 According to folklore, she rode nude through the town of Coventry to oppose a high tax imposed by her husband, Leofric. The visage of Mab Paul, a well-known model and stage actress from the era, is featured in the artwork along with an extremely realistic rendition of the episode.

She may be seen riding a white steed that has a regal gown on, as well as a halter and saddle.

This exceptional work is noted for both its aesthetic qualities and its terrible backstory. It was one of the hundreds of artworks taken by the Nazis during World War II and was produced by German Impressionist artist Max Liebermann. In addition to his artistic endeavors, he amassed a significant collection of French Impressionist paintings. The son of Hildebrand Gurlitt, Cornelius Gurlitt, was arrested in Germany in 2012. The picture was returned to the Liebermanns, who chose to sell it. The picture was valued at roughly $865,000 by Sotheby’s. 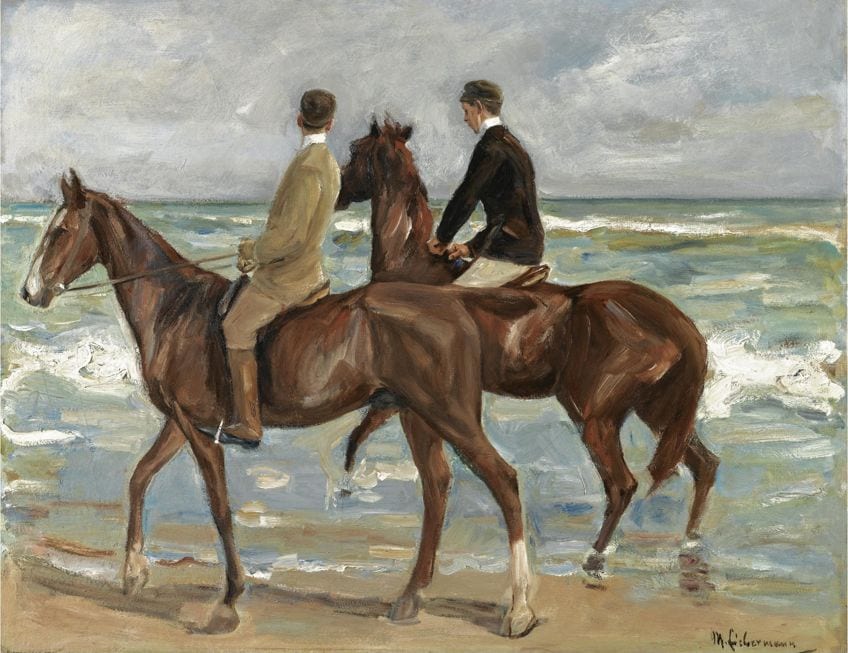 Nevertheless, in 2015, a private bidder paid $2.9 million for the painting, which was three times the original estimation. Liebermann was a staunch supporter of the division of politics and art. This picture has two versions, both of which bear the same name. David Friedmann, a rich Jewish sugar manufacturer who had developed a commercial empire in what was then Breslau, purchased one of the copies.

Franz Marc enjoyed painting animals, particularly horses. He was a deeply spiritual individual who believed that animals were pure and near to God. He also had color beliefs, claiming that yellow is considered feminine while blue is regarded as masculine. The horses in this painting appear robust and muscular, yet soft and emotional. Marc’s connection to the natural world is evident in this artwork. 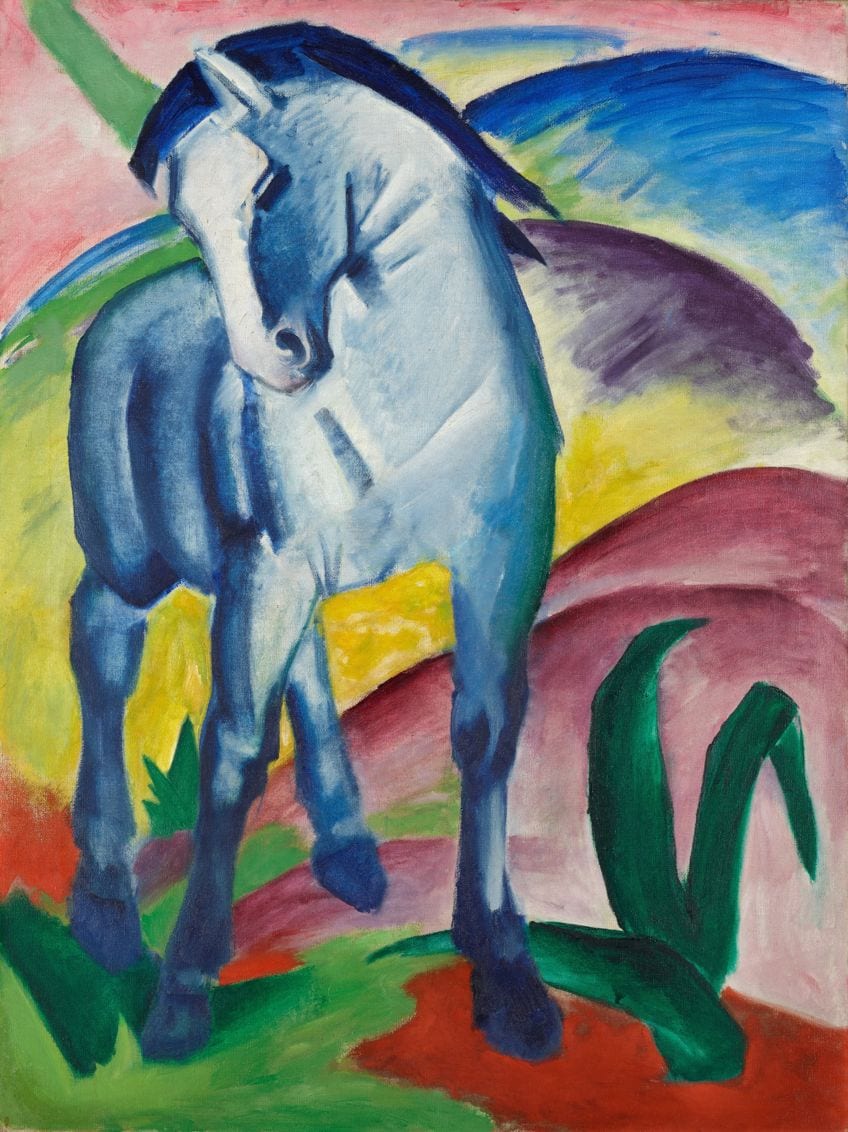 Franz Marc employs vibrant colors and curved lines. The horse’s curves are echoed in the hills in the backdrop. Take note of how the horses take up virtually the entire painting and become abstract. The process of modifying, reorganizing, twisting, or deforming anything from its original condition is known as abstraction.

This is one of Franz Marc’s more notable paintings before his life was cut short at the Battle of Verdun when he was only 36 years old.

Cubist painters frequently worked with situations and themes familiar to their viewers but depicted them in a way that highlighted their main subject from several angles. In the early 20th century, when Cubism was only gaining traction across most of Europe, Metzinger was widely regarded as a master among Cubist painters. This is one of Metzinger’s most famous works, including an animal and a human figure. This artwork was initially shown in Paris at the Salon des Indépendants in the same year Metzinger finished it. This painting was praised by reviewers and audiences alike for its ability to depict several elements of the painting’s primary subjects at the same time.

That concludes our look at 10 famous horse paintings that have captured the world’s imagination through the years. The painting of horses by famous artists is a genre that has not seemed to wane, even into the era of fast paced-cars and technology – there is something about horses that attracts the attention and hearts of those who witness them. Horse painting artists have managed to capture the qualities of equines that humans love so much.

One of the first subjects that humans ever painted was horses and other surrounding animals. Equines have been a part of human development for centuries – helping us explore new territories and transport trading goods and people. Even though they might not be used as much for transport anymore in the Western world, they are still loved and ridden by both hobbyists and enthusiasts.

Who Is the Most Famous Horse Painting Artist?

There have been many famous horse painting artists through the years. Many artists have depicted racing horses in their works. Edgar Degas is arguably the most famous of them.