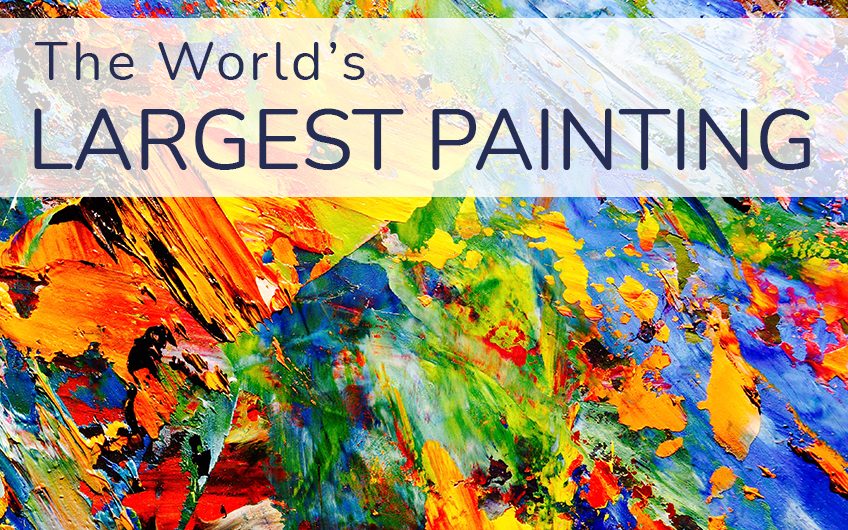 Born in 1977, Sacha Jafri is a well-established contemporary artist who is most famous for his record-breaking production of the world’s largest painting, The Journey of Humanity, in 2020. Jafri is an artist who operates exclusively from the regular art gallery scene.

Many of his works are often donated and sent as proceeds to charity organizations.

Jafri is also a graduate of Eton boarding school, a prestigious British institution that received other high-profile figures like the Duke of Cornwall, and Prince William. Among Jefri’s collectors are other famous celebrities and public figures, including the likes of the 44th President of the United States, Barack Obama, Sir Richard Branson, George Clooney, Leonardo DiCaprio, and even members of the British royal family.

The World’s Largest Painting: The Journey of Humanity (2020)

In 2020, Sacha Jafri embarked on a mission inspired by the needs of the global youth as highlighted by the pandemic, to create a massive painting that would be sold off on auction and for the proceeds to be donated to various charity organizations aimed at helping children in need.

The enormous stretch of just over 17,000 ft² of canvas is now known as the largest canvas painting in the world.

The painting consists of 70 separate segments, which were initially supposed to be auctioned off separately but were finally sold for a whopping $62 million in Dubai to a French national, Andre Abdoune, who was very much touched by the artist’s work and intention.

Abdoune states in an interview on the purchase of the massive painting that he too experienced poverty growing up, therefore, he sympathized with the sentiments of helping children in need, further stating that “the painting was very powerful” when he saw it. The cryptocurrency businessman also spoke on the impact that the Covid-19 pandemic had on children across the globe, for which he was more than happy to contribute to the improvement of the situation in any way he could.

While Sacha Jafri holds the title for creating the world’s largest painting, the Guinness Book of World Records states that the world’s largest oil painting executed by a single artist was done by Sarans K. K. on November 25, 2021, in Abu Dhabi and sits at approximately 1,787.13 ft².

The Making of the World’s Biggest Painting

This large-scale art project began as an open call for children from across the globe to submit their artworks during the pandemic. The artwork received amounted to artwork from over 140 countries, as children were requested to share their feelings and artistic expressions surrounding isolation and loneliness during the pandemic.

The artwork of children from 140 countries was the foundation of Jafri’s artwork. He called this the first layer of his painting. Each of the artworks was carefully pasted onto the 70 canvases and represented portals. According to Jafri, the portals served as “windows into a better future”.

The final painting was created using numerous layers of paint and layered artwork. Jafri believes that if a child is unable to feel either safe, loved, or brave, then this limits the child’s ability to dream and we, therefore, limit the growth and development of the next generation.

The biggest painting in the world, The Journey of Humanity, is divided into five sections. The first section, as Jafri attributes it, is called the Soul of the Earth. This portion of the painting serves to represent the energy that rises back up in a colorful array of long wavy lines of paint, to help unite humanity into the Earth.

This section then flows into the second portion of the painting, “Nature”, represented by child-like abstract images and vivid expressions of trees, rivers, and naturalistic hues.

The third portion of the painting is defined as The Arrival of Humanity and is representative of the journey of the child. Jafri describes this journey as the stage at which parents guide children and not attempt to change them. In this portion of the painting, the forms appear more “grown-up” with solid shapes and in-filled colors, and clearly defined patterns.

Putting the Pain in Painting

Sacha Jafri completed the painting in approximately eight months, working tirelessly for 20 hours each day. The painting took place at the Palm in Dubai, in the massive ballroom of the Atlantis hotel. According to reports, Jafri was scheduled for his own 18-year retrospective show with Saatchi Gallery, including other important projects for the Tokyo Olympics and the Dubai Expo but everything was canceled in light of the pandemic lockdown.

Jafri was essentially stuck in Dubai but this did not halt his creative pursuits. According to the artist, he “slept in the ballroom for eight months” even though he had a room at the hotel.

As grandiose as the project may seem, the task of execution did not come without a price to the artist. At some point, Jafri had to face an emergency operation, which required a rod through his spine and extra cushioning between two of his vertebrae. In addition to this, his skeleton was completely unaligned and Jafri was eventually on painkillers every four hours. The excruciating nature of the process was, however, still fruitful as the painting was sold and the proceeds were donated to four charities.

A Surrealist Exploration of the Subconscious

In The Journey of Humanity, Jafri not only draws relations to the act of an artist moving outside of the realm of the gallery space and artistic expression with the intention of commercial gain and ownership but he also includes in his act of humanity, the artist as more than just a job for fame and personal gain. His large philanthropic and social art project sold for quite a lot of money, of which the proceeds were distributed to helping children and vulnerable communities in need.

Along with the act of displaying humanity through the use of art as a medium and his body as a vessel for painting this massive artwork, Jafri also highlights the use of the subconscious in the creation of the artwork.

To create the artwork definitely required a considerable amount of physical strain and effort, coupled with meditation and Jafri’s reflections on the state of humanity, the act of using his body as a channeling medium through which he pours out the soul of the world, and his hope for a brighter future.

The intriguing aspect of the artwork is that the painting, which is Surrealist in nature, also carries with it the subconscious of Jafri, who attempted to rid himself of ego and anything standing in the way, as a selfless act of channeling the soul of the world, its Anima Mundi. This meant that he also channeled his inner child and the act of evoking the inner child in a world run by selfish gain, was also an act of channeling the children of the world. Thus the soul of the world cannot exist without the beauty of creation and child-like wonder found in children – the soul of the child.

Jafri also builds on his intention behind evoking the soul of the world in The Journey of Humanity as a painting that should serve as a “shock to the senses” of the adult who is very much centered in their three-dimensional reality. This “shock” is meant to reactivate the dormant quality of creativity, a trait that most people tend to leave behind in childhood. Unlike most artists, Jafri chose to engage with his audience in the “least conceptual way possible” by appealing to the “raw emotion” and purity of spirit evoked in the act of painting.

Jafri’s production of the world’s largest canvas painting was also an attempt to keep the soul of the child alive, with the afterlife of the painting putting into effect real-life change across the world. The focus of Jafri’s work is also not so much on the destination and visual output of the artwork but it is more so on the process and “in-between moments” of making that give the artwork its true essence.

The process behind the construction of the world’s largest painting is definitely one that can be considered the most physical strain endured by a living artist for the sake of resurrecting the soul of the world and leveraging a more philanthropic approach to artistic expression and artmaking.

What Is the Biggest Painting in the World?

The biggest painting in the world is considered to be The Journey of Humanity (2020) by Sacha Jafri.

What Is the Largest Oil Painting in the World?

The largest oil painting in the world is considered to be a massive 1787.1ft² portrait painting showcasing the various portraits of leaders from the United Arab Emirates. The painting was executed by an Indian artist called Sarans K. K. in 2021.

How Much Paint Was Used to Make the World’s Largest Painting?