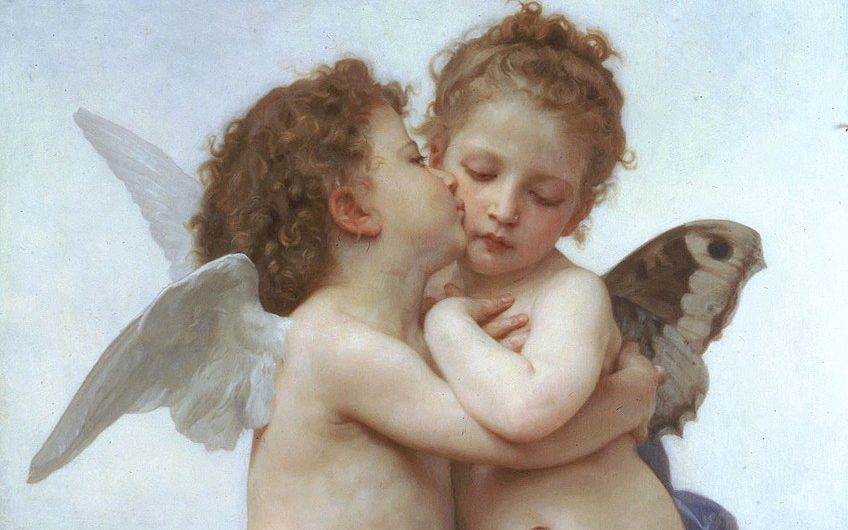 When thinking about angels, the images that come to mind are of beautiful people dressed in white, complete with dove-like wings and a celestial glow. These images that enter our heads are primarily thanks to popular Renaissance paintings of angels. In this article, we will look at some of the most famous angel paintings as well as explore how angels in art differ from those depicted in the Bible.

A Brief Introduction to Angels in Art

Everyone knows what an angel is – even those who are not religious or do not believe in them. This is largely due to their presence in art. There are many classic famous angel paintings that people from all cultures and beliefs have come to admire. Therefore, most people have a fairly similar idea about what an angel should look like. What is interesting, however, is how different this image is from the angels mentioned in the Bible.

Although it is not only Christians that believe in angels (they are present in other religions too, such as Islam and Judaism, to name a couple), this article will focus on what the Bible dictates. This is because the majority of artists featured in this article were commissioned by the Catholic church, which would have shaped their creative decisions.

Most denominations of Christianity have a similar view on angels, although there are some deviations. The majority believe in a nine-fold celestial hierarchy, meaning that not all angels can speak directly to God. In the same vein, not all angels bother themselves with humans. At the top of the celestial hierarchy are seraphim (six-winged beings that are closest to God), and at the bottom are angels.

What is particularly interesting are the discrepancies between what the Bible tells us angels look like and how artists choose to portray them. For example, in the Bible, cherubim are beings with four wings, four faces (a lion, an ox, a human, and an eagle), and hooves. Their entire bodies are also covered in eyes.

What we think of as a “cherub” actually comes from Greco-Roman mythology and was previously known as a putto. The artist that is responsible for merging the imagery of the putto with the Biblical cherubims is Donatello. He did this in order to create a bridge between Pagan and Christian iconography.

Many other artists of the Renaissance were inspired by his artworks and thus followed suit.

Below are some of the most famous angel paintings throughout art history. The majority of these were created during the Renaissance and Baroque periods. However, artists from other periods have also been inspired to create their own angelic artworks.

The Sistine Madonna is one of Raphael’s most famous paintings. It was requested by Pope Julius in 1512 for the Piacenza monastery of San Sisto. For this reason, it is sometimes known as Madonna di San Sisto. The Virgin Mary and baby Jesus are the focal points, however, they are certainly not the most famous features of the painting. Rather, this role belongs to the two cherubs at the bottom of the painting, staring with bored expressions into the heavens.

Because these cherubs have been replicated so often, many actually believe they possess their own painting. 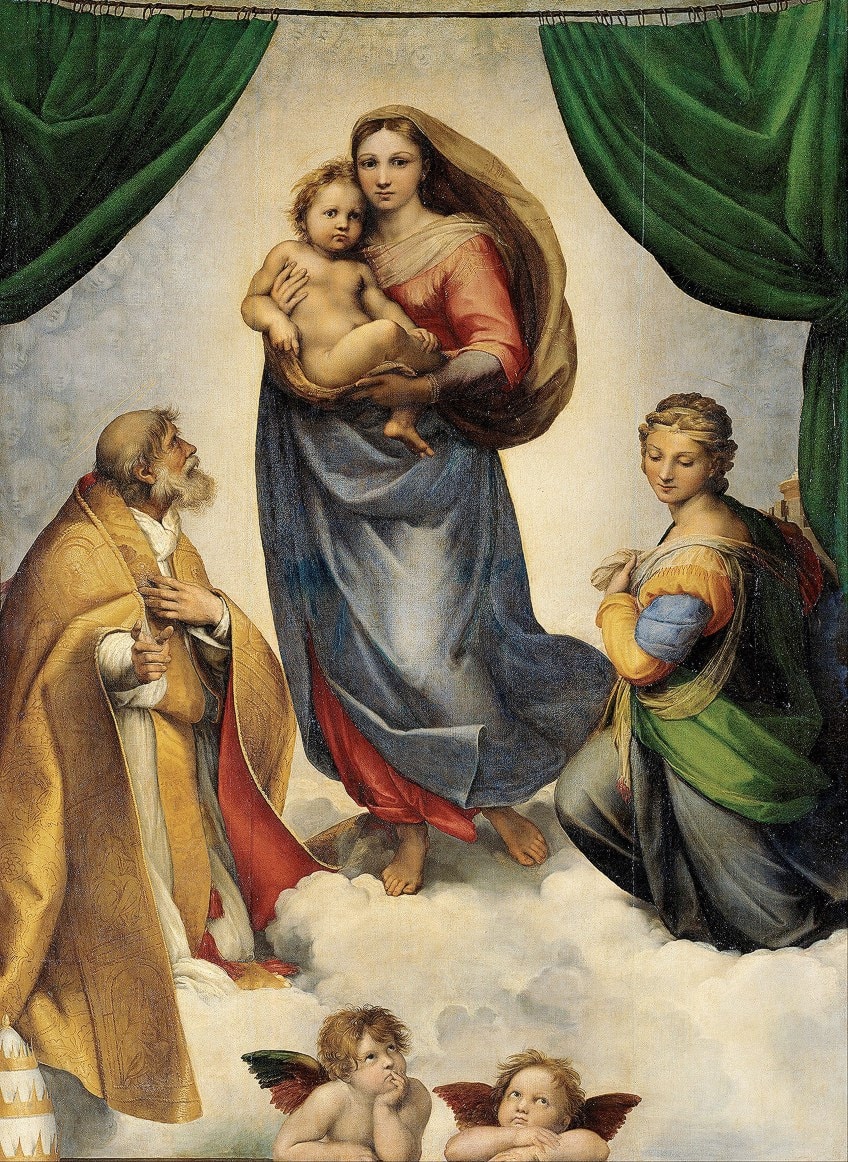 The Conversion of Saint Paul was commissioned by Pope Paul III for the Vatican Palace. This classic famous angel painting depicts the Biblical story of how Saul of Tarsus became Paul the Apostle. In the tale, Saul tries to rid the world of Christians. However, after he is confronted by God (as is shown in the painting), he changes his ways and converts to Christianity. In the painting, God is surrounded by an army of his angels, adding extra drama to the scene.

The move towards Mannerism is evident in the bright colors and chaotic composition of the painting. 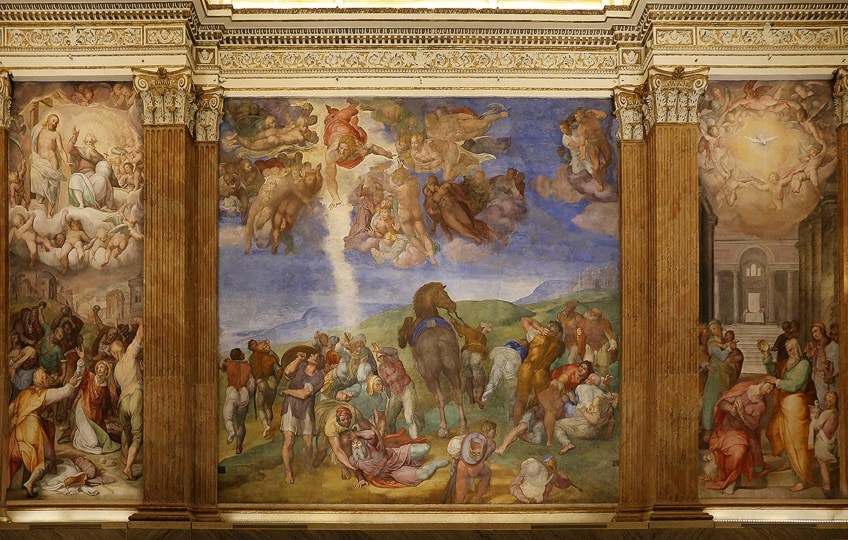 Saint Francis of Assisi in Ecstasy (c. 1595) by Caravaggio

Caravaggio was a painter of the Baroque era. He is most famous for his dramatic use of the chiaroscuro technique (which uses contrast between light and shadow) as well as his tumultuous lifestyle. However, despite all of the scandals that he caused, he still received numerous commissions from the Catholic church. Saint Francis of Assisi in Ecstasy was one of these. In the painting, Saint Francis lies in the arms of an angel, having received stigmata (the wounds of Christ).

Caravaggio’s rendition is beautiful and peaceful, which is very different from the Biblical version. In the Bible, the angel is a six-winged seraph that inflicts crucifixion wounds on St Francis. 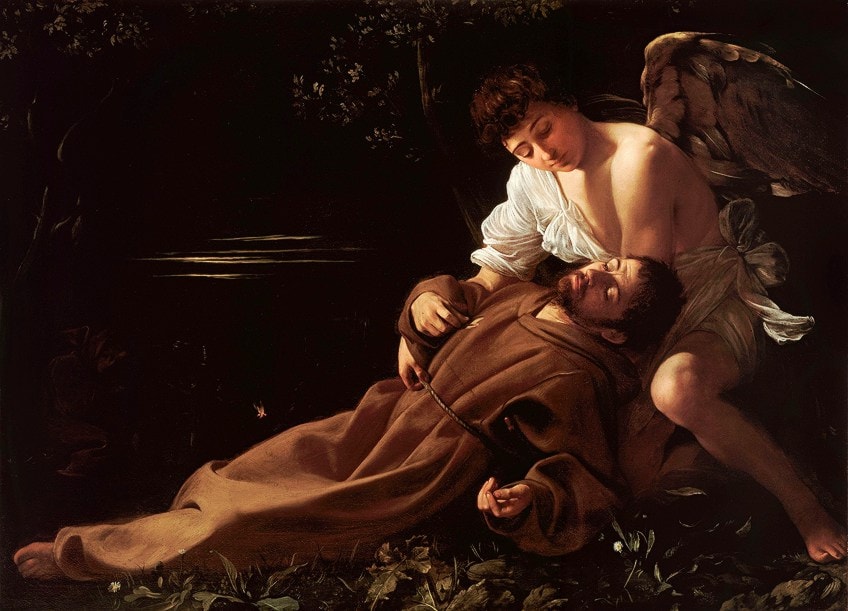 Peter Paul Rubens was a Flemish artist who gained fame during the Baroque period. The Triumph of Victory is infused with all of the energy and drama of a typical Baroque painting. It showcases a victor standing on the corpses of his enemies. The winged goddess of victory places a crown on his head, letting audiences know that his win was divine. Victory is depicted in classic Rubenesque style, with a plump, voluptuous body that honors the female form. She is draped in purple silk and has wings like an angel.

However, her wings resemble that of a pheasant rather than a dove. Symbolically, pheasants are associated with dominance and masculinity, which juxtaposes her soft, sensuous appearance. 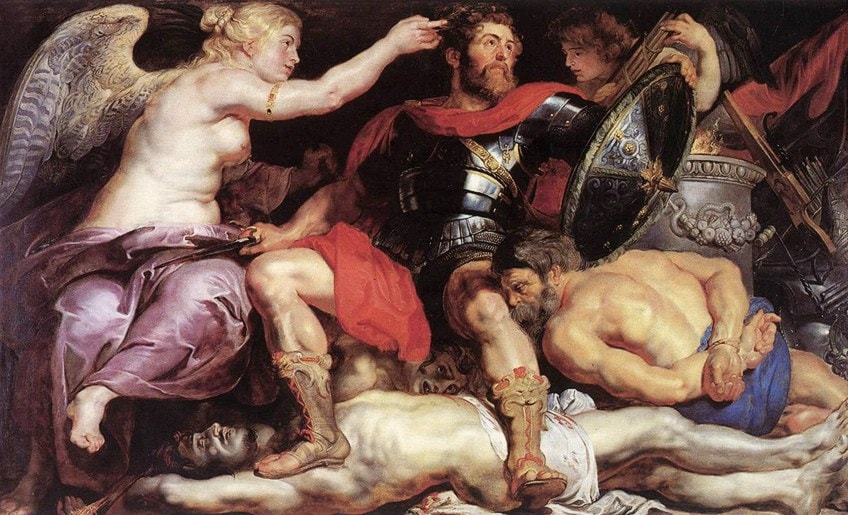 Jacob Wrestling with the Angel (1659) by Rembrandt

Rembrandt is considered by many to be one of the greatest masters of the Dutch Golden Age. Biblical scenes such as Jacob Wrestling the Angel were common in Rembrandt’s early artworks, however, later, he mainly focused on portraiture and landscape painting. Jacob Wrestling the Angel tells the tale from Genesis of Jacob fighting with an unknown figure that confronts him. The battle goes on all night and, in the morning, Jacob realizes that the figure is an angel.

The angel blesses him and says that henceforth, his name will be Israel, not Jacob. Many believed that it must have been a dream, although it has been said that the newly named Israel was left with a hip injury after the brawl. 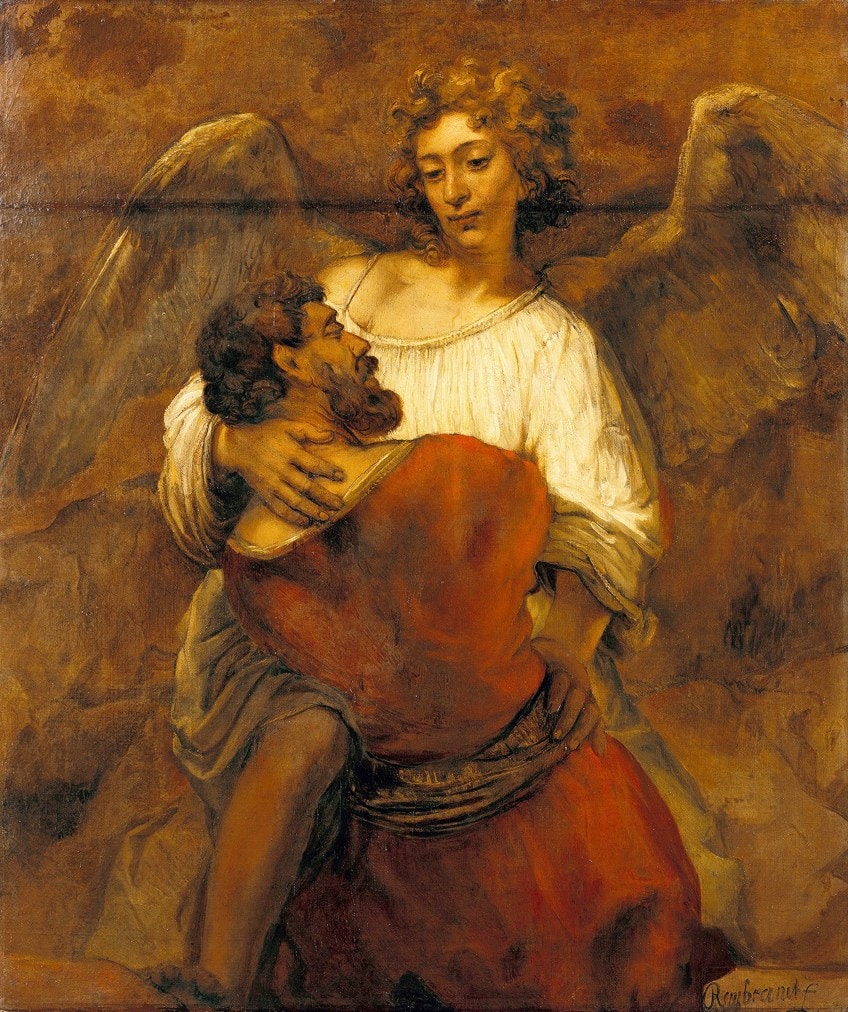 Jacob Wrestling with the Angel (1659) by Rembrandt; Rembrandt, Public domain, via Wikimedia Commons

J. M. W. Turner was a British Romantic artist whose work is now celebrated internationally. His paintings are easily identified by his unique use of light and color. Turner is best known for his naval paintings, but later in his career, he dabbled in religious art. At first glance, The Angel, Standing in the Sun just looks like a beautiful haze of golden light.

However, upon closer inspection, the painting is riddled with death and violence. The archangel Gabriel appears in the center, holding a flaming sword to try to enforce peace on earth. 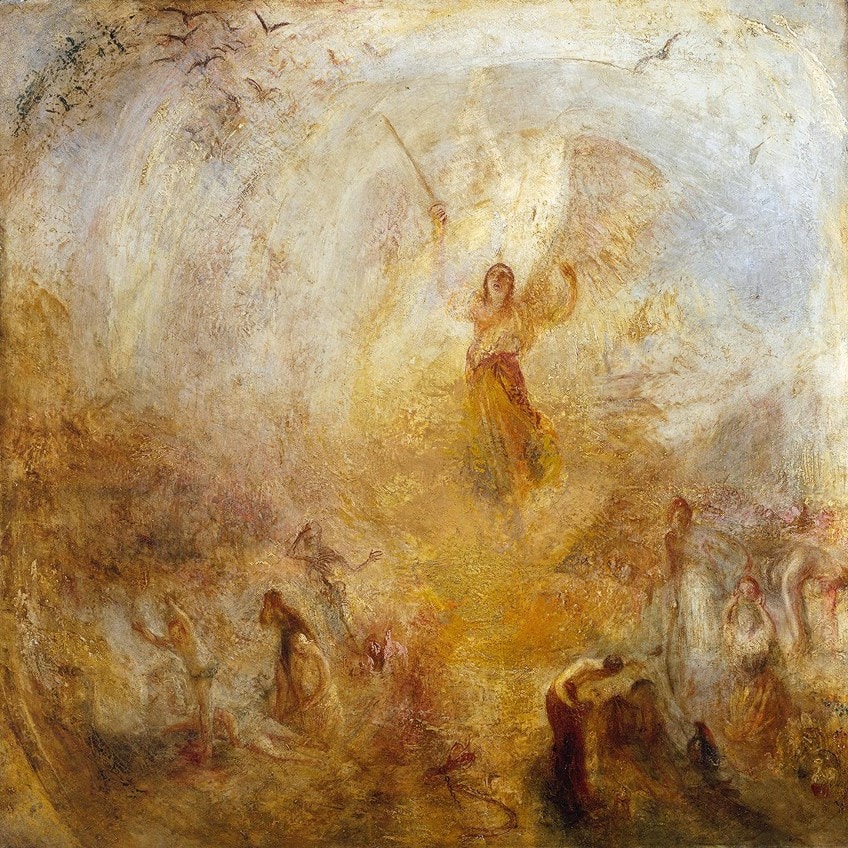 A Soul Carried to Heaven (c. 1878) by William-Adolphe Bouguereau

William-Adolphe Bouguereau was a French academic painter. While most of his peers were pursuing Impressionism, he was more interested in Neoclassical art. The Renaissance masters had a strong influence on Bouguereau’s work due to the time he spent in Rome. He frequently painted characters from Greek mythology such as nymphs, satyrs, and angels. In A Soul Carried to Heaven, a young woman wrapped in a black shroud is carried into the heavens by two angels.

The scene is beautiful and peaceful rather than depressing. As Bouguereau outlived the majority of his children, this image of death likely brought him comfort. 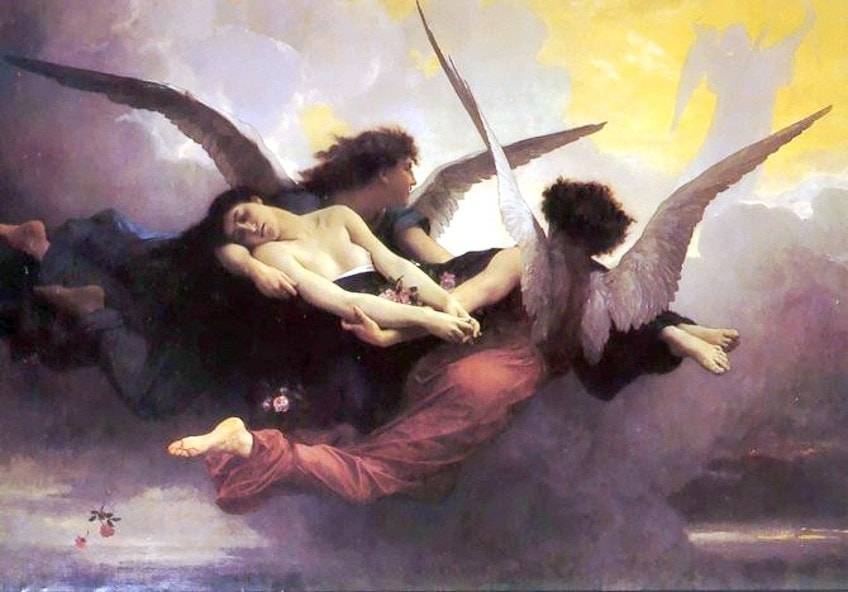 Abbott Handerson Thayer was an American artist and author. He is remembered for his famous angel paintings, of which Angel is the most well-known. Thayer was an eccentric artist who tried to layer meaning into his paintings. He felt very strongly that women’s virtues should be desired over their bodies. He praised this purity in his artworks through his angelic subject matter.

The angel in this painting was modeled for by his daughter Mary, who he believed exemplified these qualities. 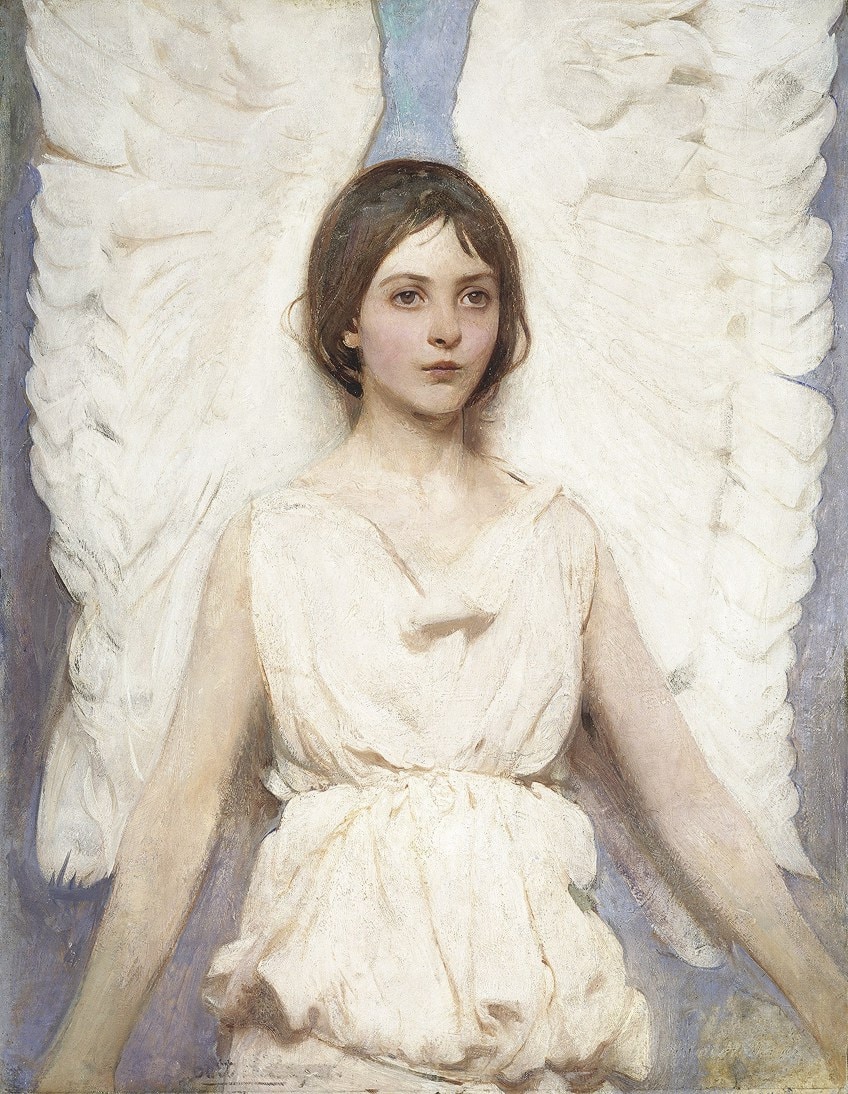 Vision After the Sermon (1888) by Paul Gauguin

Paul Gauguin was a French artist who helped shape a number of art movements, including Post-Impressionism, Primitivism, and Synthetism. Vision After the Sermon is one of his most famous Post-Impressionist artworks. Gauguin used the Biblical tale of Jacob wrestling with the angel as his inspiration although it is definitely not a typical classic famous angel painting. 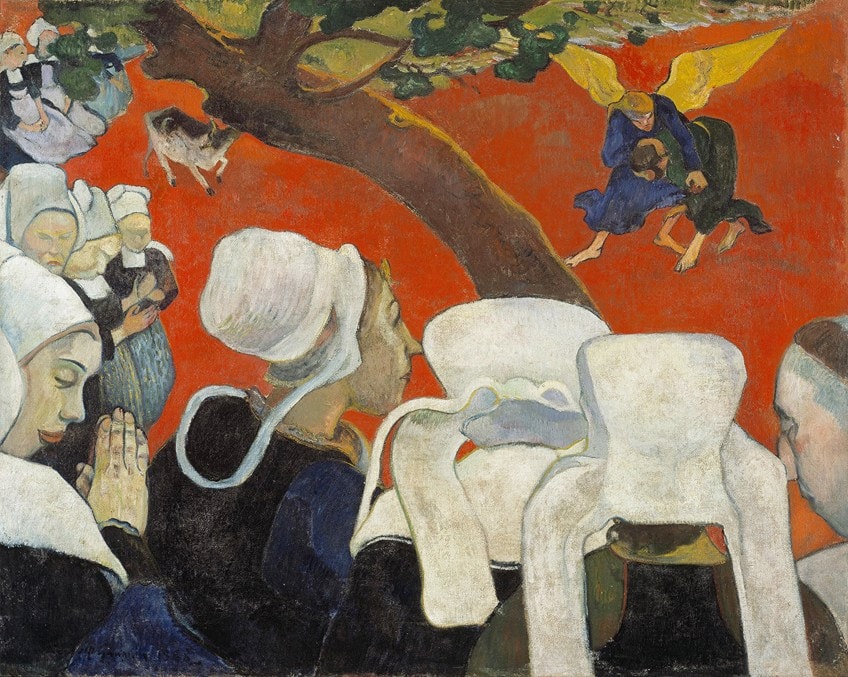 L’Amour et Psyché, enfants (or Eros and Psyche, children in English) is another one of William-Adolphe Bouguereau’s most famous artworks. It is reminiscent of Renaissance paintings of angels, as his art was inspired by that period.

The painting alludes to the Greek myth of Psyche and Eros (known by the Romans as Cupid), although they are painted as children to look like cherubs. 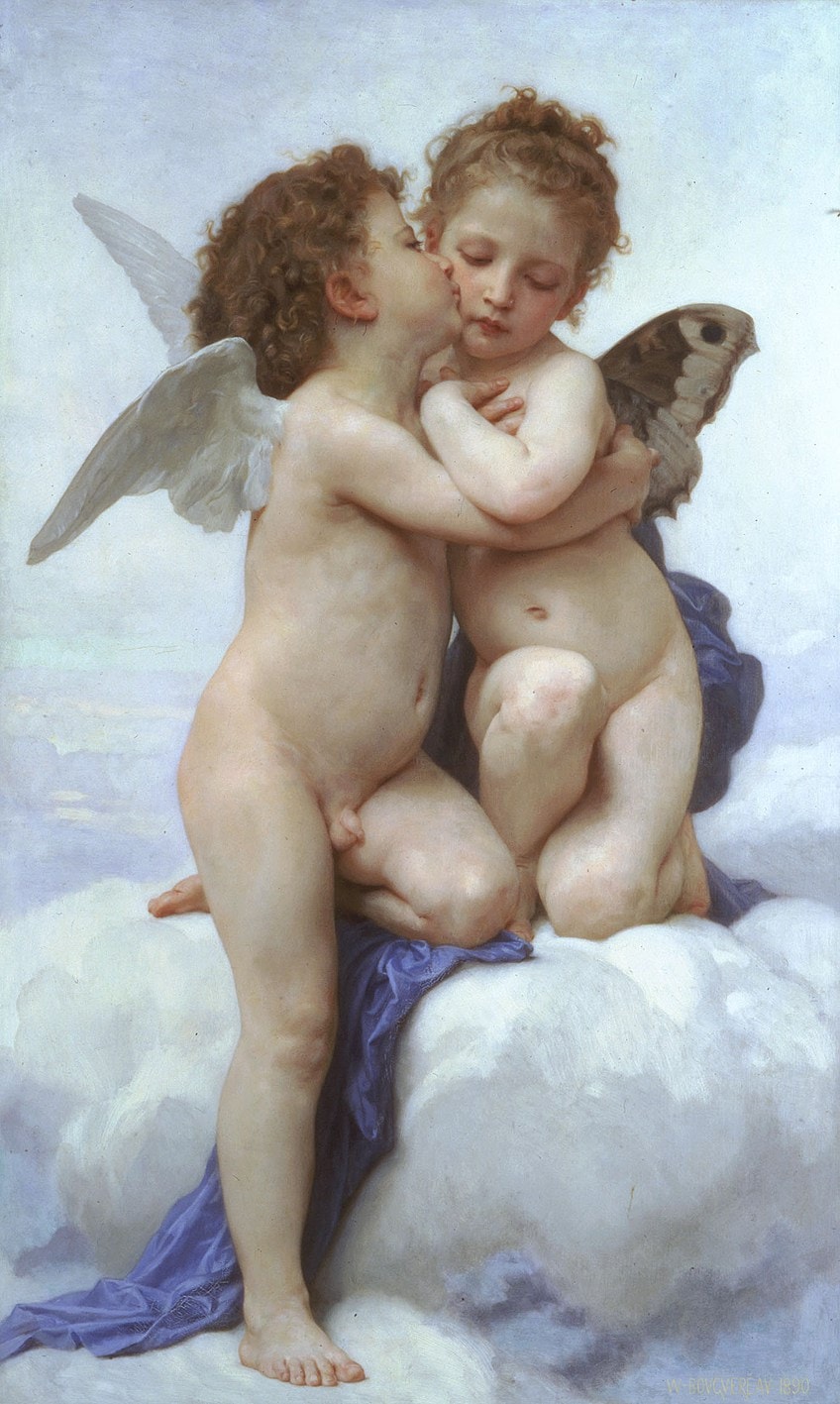 Bouguereau uses the cherub’s expressions to show Eros’ adoration of Psyche as well as her immense sadness at being away from her family. He was so inspired by the tale of Eros and Psyche that he created three separate paintings featuring the pair throughout his career.

Thanks to many artists throughout history, angels have come to be part of popular culture. Although they have taken on numerous shapes in various famous angel paintings, they typically convey notions of beauty and the power of God. If you enjoyed these classic famous angel paintings, be sure to do some more exploring of your own.

What Is the Most Famous Angel Painting?

One of the most widely recognized paintings of angels is Raphael’s The Sistine Madonna (c. 1512-1514). Although not the center of the painting, the two cherubs at the bottom have become iconic in pop culture. Many reproductions of them have been painted over the 500 years since their creation. They are often comically depicted with a cigarette and beer on postcards.

Why Did Renaissance Artists Paint Angels?

There are a number of likely reasons why angels may have been so popular in Renaissance art. Firstly, religious art in general was prevalent due to the patronage of the Catholic church. Secondly, beauty standards of the time favored soft, angelic-looking women. Therefore, it made sense to create art with the same desirable features. Finally, angels were messengers of God and synonymous with the idea of enlightenment, which was central to the Renaissance.