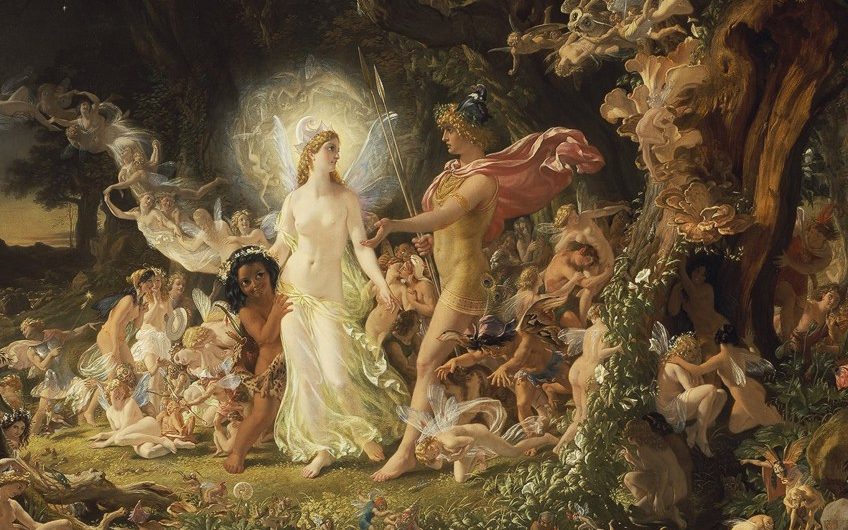 The Victorian era was characterized by a preoccupation with fairies and the paranormal, which led to a specific style of fairy paintings inspired by myth and folklore. Despite having a charming appeal, fairy artwork has deep roots in the Romantic movement’s dramatic and literary works as well as the social ills that the Victorian age had to deal with. Although the era of Victorian fairy painting was the most prominent period for the style, it has experienced modern revivals. Today we will explore the most well-known paintings of fairies and the fairy artists who created them.

Creating fairy illustrations was a common form of escapism for those who lived in the Victorian era. During this time, cultural changes also a significant role. Long-standing customs were being uprooted by industrialization, and some people were uneasy and perplexed by the quick breakthroughs in technology and science, particularly the discovery of photography.

An escape from these requirements was made possible by turning to legendary and fantastical themes, particularly the realm of Victorian fairy paintings.

No other form of art brought together as many opposing aspects of the Victorian subconscious as fairy artwork did, including the latent repulsion against the certainty of photography’s invention as well as the eagerness to evade the mundane hardships of daily life and the rumblings of new attitudes toward sex that were suppressed by religious dogma. 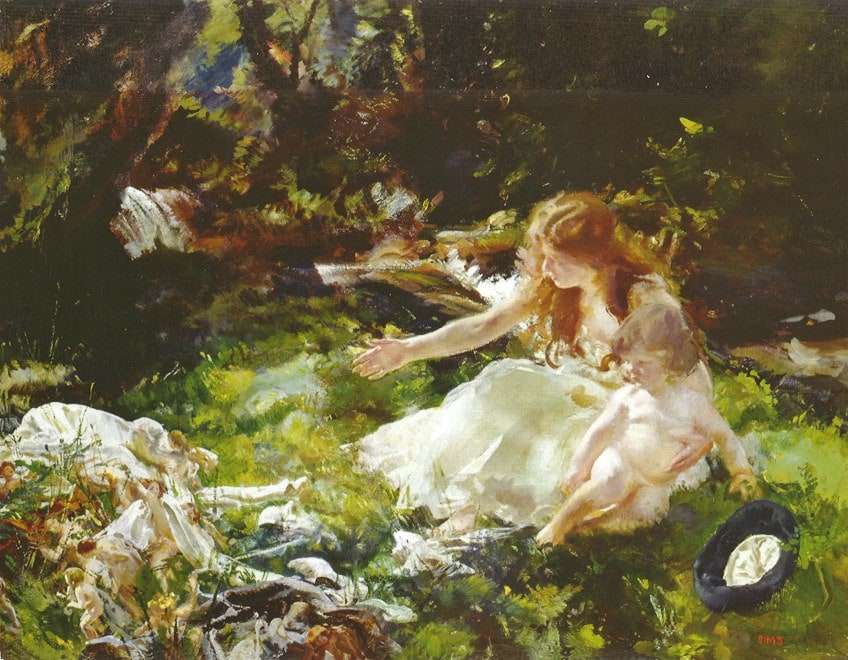 ‘…and the fairies ran away with their clothes’ (c. 17th/18th century) by Charles Sims; Charles Sims, Public domain, via Wikimedia Commons

The fairy king Oberon and queen Titania reconcile at the conclusion of Shakespeare’s A Midsummer Night’s Dream (1605), and Puck claps along while Moth, Cobweb, Peaseblossom, and Mustardseed dance in a circle. Fairies in this work by William Blake dance on their tiptoes while decked out in petals, leaves, and gauzy garments. They resemble people but are tiny when compared to a tree trunk. They become mystical creatures as a result of the firefly’s peculiar, silvery light.

This charming watercolor reflects the nymphs’ ethereal characteristics as well as the enchanted woodland location in which they dance. The fairies spin in a circle while holding hands, evoking the ceremonial English country dances that were performed in May in Shakespeare’s day. 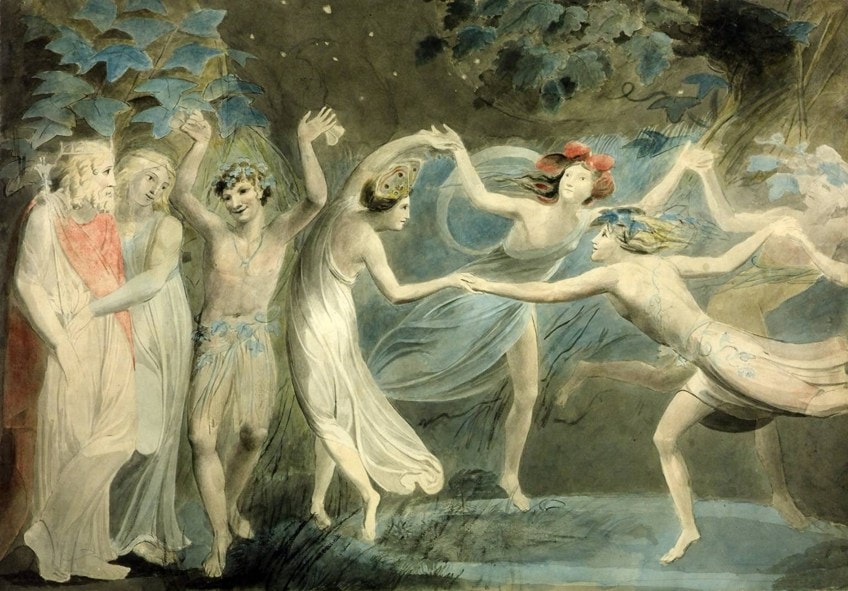 In this fascinating scenario, Henry Fuseli’s creativity is let loose. Titania summons her fairies, who are dressed in modern attire, to take care of Bottom: In order to help, Mustard-seed lands on his hand, Pease-blossom rubs his donkey’s head, Cobweb captures a bee and delivers him the honey bag.

He is presented with a bowl of dried peas by a lecherous young woman.

The young lady pulling an object like a dwarf by a thread represents the victory of the feminine over the masculine, as well as the victory of vitality over aging. The hooded elderly woman to the right is holding a wax changeling that has just been created. The children in the cluster on the left of the image are also manufactured beings produced by the witches. 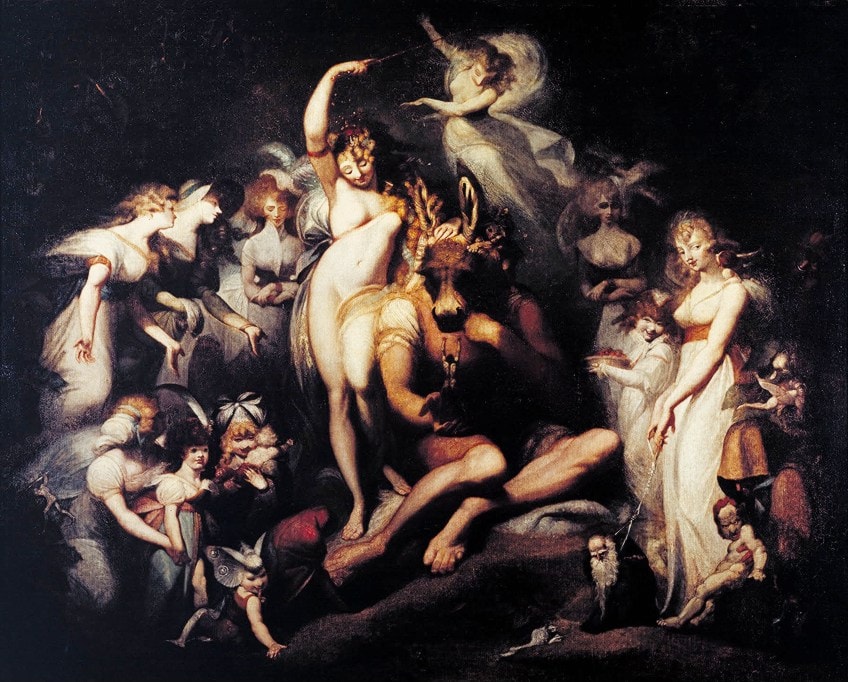 Henry Fuseli and other Romantic fairy artists found Paradise Lost (1667) by John Milton particularly appealing since it delves into the worlds of fantasy, dreams, and the paranormal. The image depicts a line from Milton’s poem where he compared the fairies who enchant a traveling peasant with the sounds of their dance and music to the angels in Hell’s Hall of Pandemonium.

Rather than portraying the fairies as they do in classic woodcuts, Fuseli depicts them with joining arms and whirling, like in a dream or vision, above the dozing shepherd as they dance in a magic circle on the ground.

They emerge from the shadows and create a light vortex over his head, which one fairy touches with a wand in order to induce dreams. The mysterious beings that appear in the painting are the result of Fuseli’s imagination. 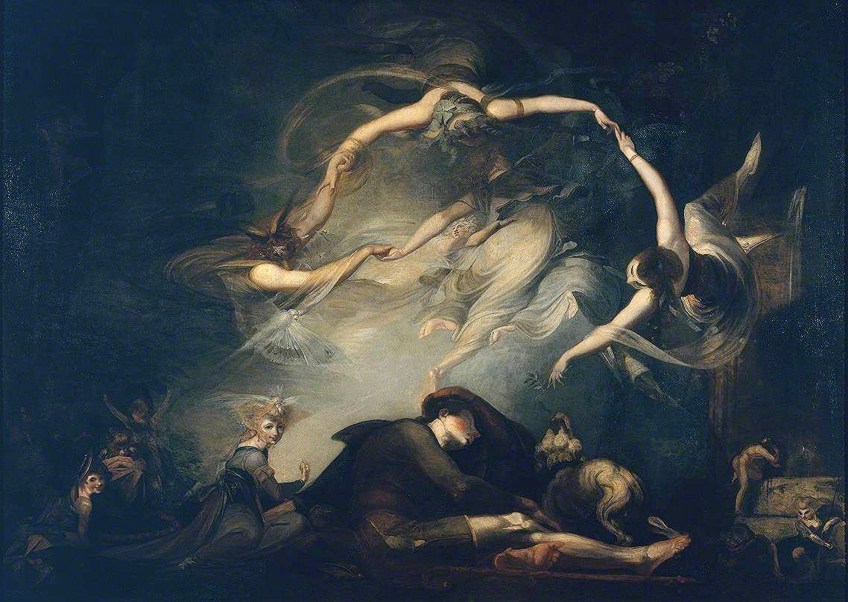 In this image, the fairy lovers Titania and Oberon from the 1605 Shakespeare play, A Midsummer Night’s Dream, are seen dancing in the moonlight. A fantastic effect is produced by the fairies’ tippy-toe movements, flower and bug headdresses, swirling draperies, and ominous light. In the development of British Romantic art, Theodor von Holst, a painter from London, has a special place between his lively and eccentric mentor Henry Fuseli and his most significant follower, Dante Gabriel Rossetti. Together, Rossetti and Holst provide a creative link between Regency-era painting and the art of the Symbolists, the Aesthetic Movement, and later periods.

Nevertheless, the tremendous romantic production of both artists attracted more the expert than the general audience, which was a cultural barrier that both artists had to overcome throughout their lives. 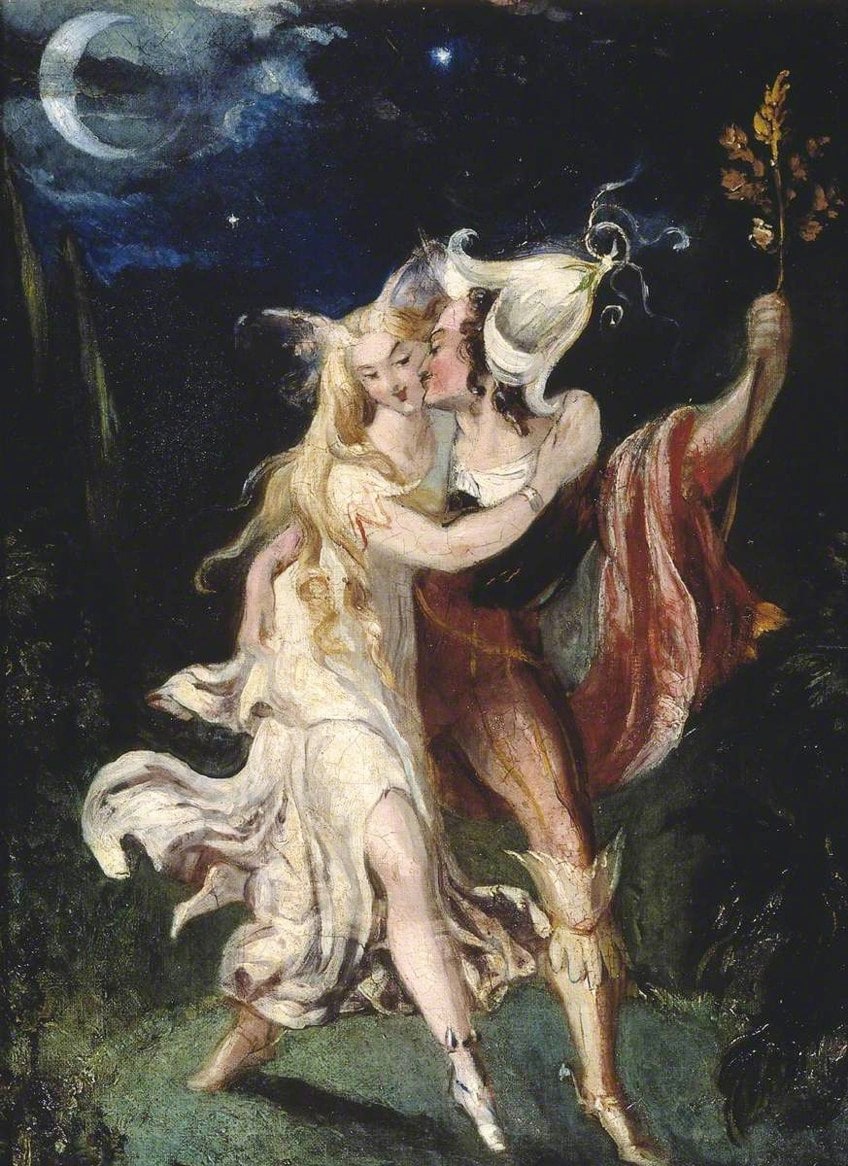 Shakespeare’s A Midsummer Night’s Dream (1605), when Titania is soothed to sleep by her fairy attendants, is shown in Dadd’s fairy illustration. Oberon is getting ready to press the juice from the magical flower on Titania’s eyelids while his body is nearly completely obscured by the cave’s darkness.

In the exhibition booklet for the 1841 Royal Academy show, the following passage appeared: “There sleeps Titania sometime of the night, Lulled in these blossoms with dances and ecstasy.”

At that show, the current painting and its companion, Puck, got rapturous reviews; the praise they earned helped to cement Dadd’s name as a fairy artist. While Dadd has produced something distinctive in this fairy artwork that foreshadows the intricate and highly labored masterpieces of the years of his imprisonment, its idea leans on a number of influences and reflects Dadd’s familiarity with and comprehension of the history of painting. 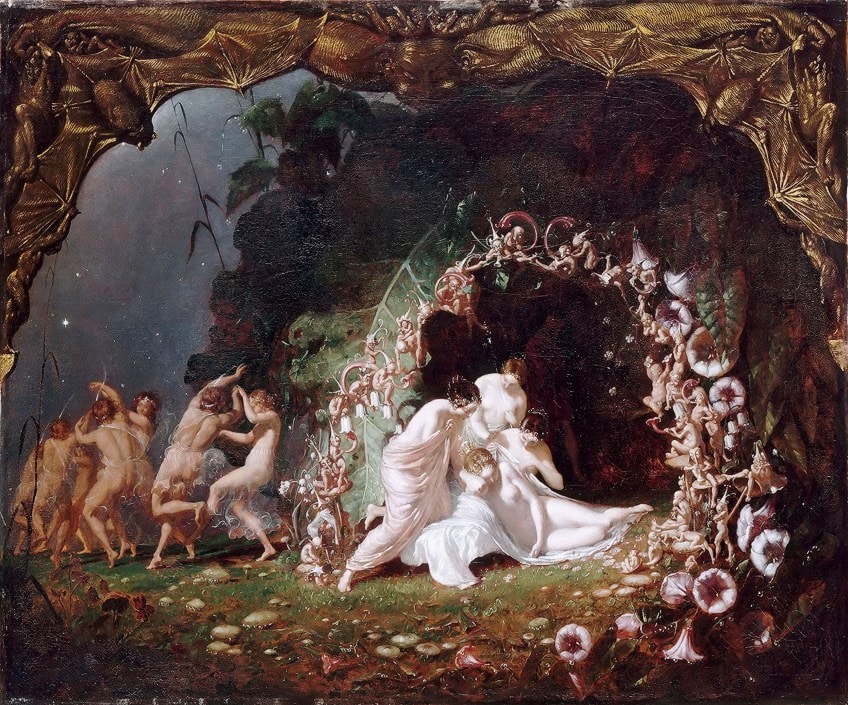 The Quarrel of Oberon and Titania (1849) by Joseph Noel Paton

It shows a scenario in which Oberon, the king, and the fairy queen argue with one another. In Renaissance literature, Oberon was regarded as the ruler of the fairies. The pair are surrounded by a troop of fairies in their woods house outside of Athens.

The boy changeling, who is hidden behind Titania, is the focus of the debate.

The painting’s foreground has a lily pond, while its woods scene is composed of flowers and twisted, old trees. A bunch of fairies are constructing a brilliant light crown around Titania’s head. To the right of the image is a statue of Pan with pipes, and underneath it are other couples who are undressed. 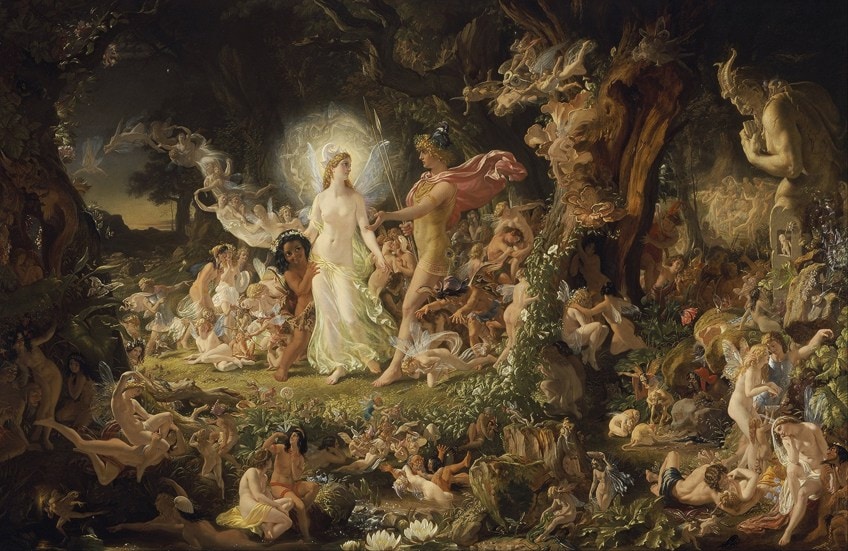 Scene from A Midsummer Night’s Dream. Titania and Bottom (c. 1851) by Edwin Landseer

This is Edwin Landseer’s only fairy artwork; he was primarily recognized for his works of animals. The scene in the artwork is from A Midsummer Night’s Dream’s third act, a 1605 play by Shakespeare. Titania, Queen of the Fairies, is seen in the picture holding the mechanical Nick Bottom in her arms after receiving a love potion. Bottom has an ass head and has also been bewitched.

Other fairy creatures are watching them, and flowers and bunnies are used to adorn the setting.

This was one of the numerous depictions of scenes from pieces that Isambard Kingdom Brunel had commissioned in 1847 to adorn the dining room of his London home. Brunel gave the painters the freedom to select their topic. It’s possible that Landseer selected this area so he could depict several animals. 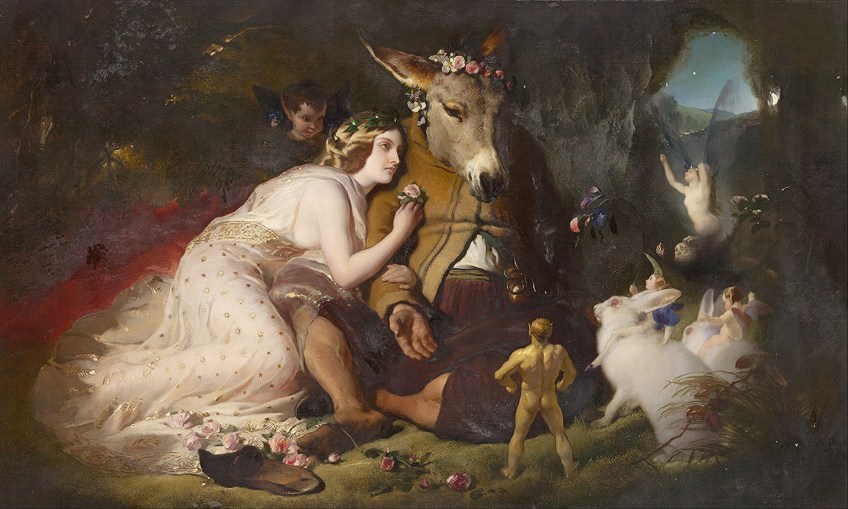 All of the people, excluding Oberon and Titania, who are depicted in the upper part of the image, are the product of the artist’s imagination. The Fairy Feller himself, who is poised to break a sizable chestnut into pieces for Queen Mabs’ new fairy chariot, is the main subject of the artwork. The white-bearded father lifts his right hand in the middle of the image, ordering the forest dweller not to attack until the order is given.

The remainder of the fairy group is waiting impatiently to see if the woodcutter will succeed in cracking open the nut in one motion.

The triple crown that the patriarch’s magician-like figure is wearing appears to be a nod to the Pope. Dadd reportedly felt the temptation to strike the Pope when he encountered him during a trip to Rome in 1843. The small apothecary holding a mortar and pestle at the upper right of the image is really a picture of the painter’s father, Robert Dadd, despite the patriarch’s potential to be seen as a father figure. 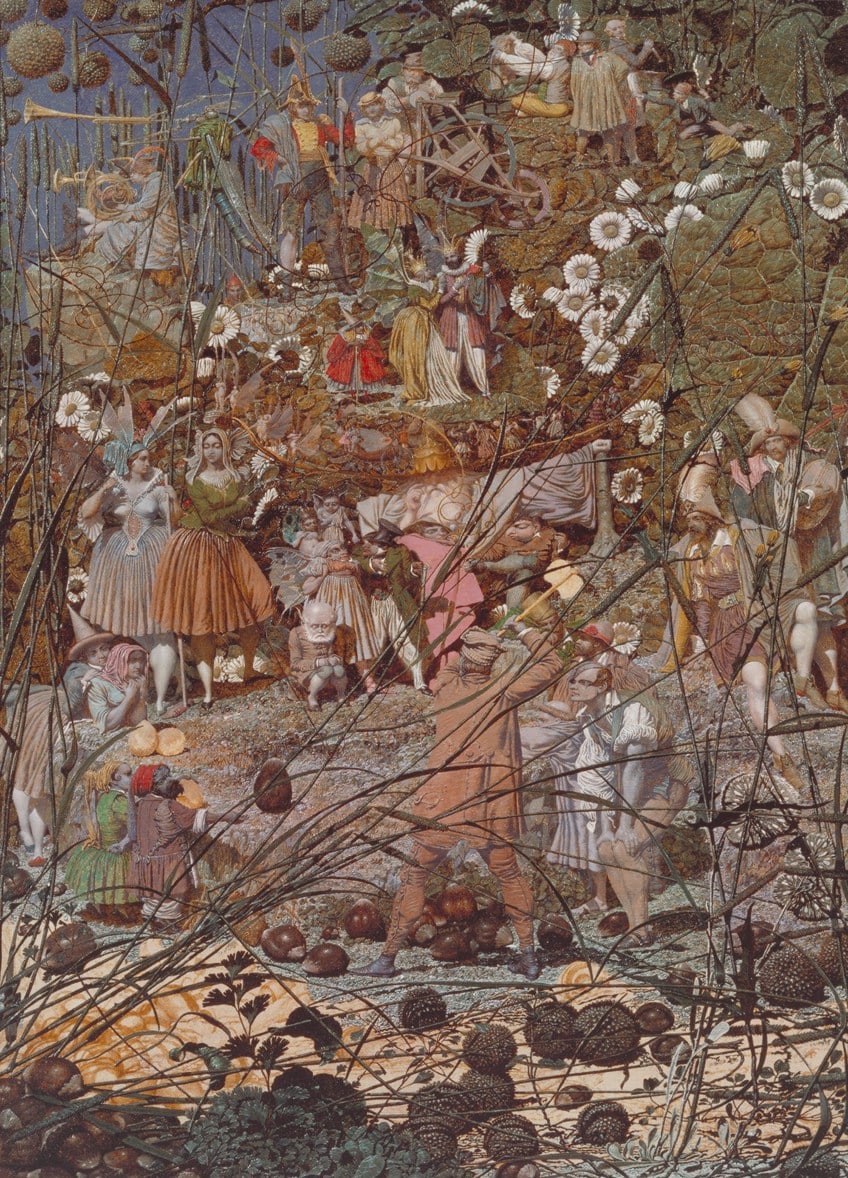 The information about Fitzgerald is scant. He is primarily recognized today for his depictions of fairyland, with this particular work likely serving as the prime example displayed at the Royal Academy in 1866. Similar to the figure seen above riding a bat’s wings and trying to stab an innocent water sprite, other works by him portray humans dozing off and dreaming of a wondrous world of sprites, elves, and demons. 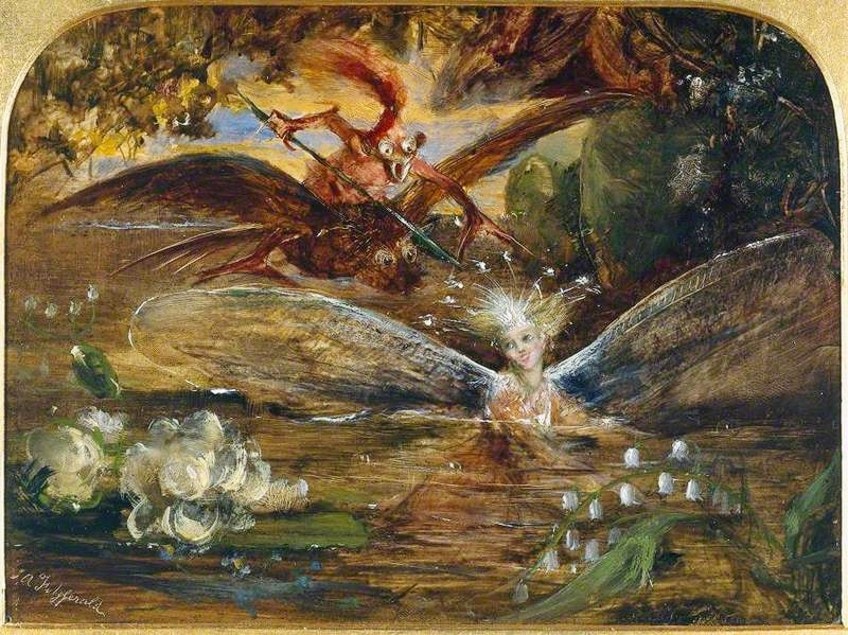 The last of our paintings of fairies is Midsummer Eve is a legendary and luminous work of mystery and imagination that skillfully captures the essence of Victorian fairy tales at a period when their popularity was on the rise. Hughes has grown to be strongly identified with the movement because his uncle was the Pre-Raphaelite artist Arthur Hughes.

Hughes became associated with both the Pre-Raphaelite and Aesthetic styles as a result of the positive economic response to a posthumous retrospective show, and since this labeling, his artistic activity has received little attention.

Hughes, a well-known and well-respected artist in his day, had a lucrative career producing figurative likenesses of members of society, dabbled in the trendy medium of watercolor painting, and specialized in elaborate, brash paintings with mythological, legendary, and literary themes and subjects. 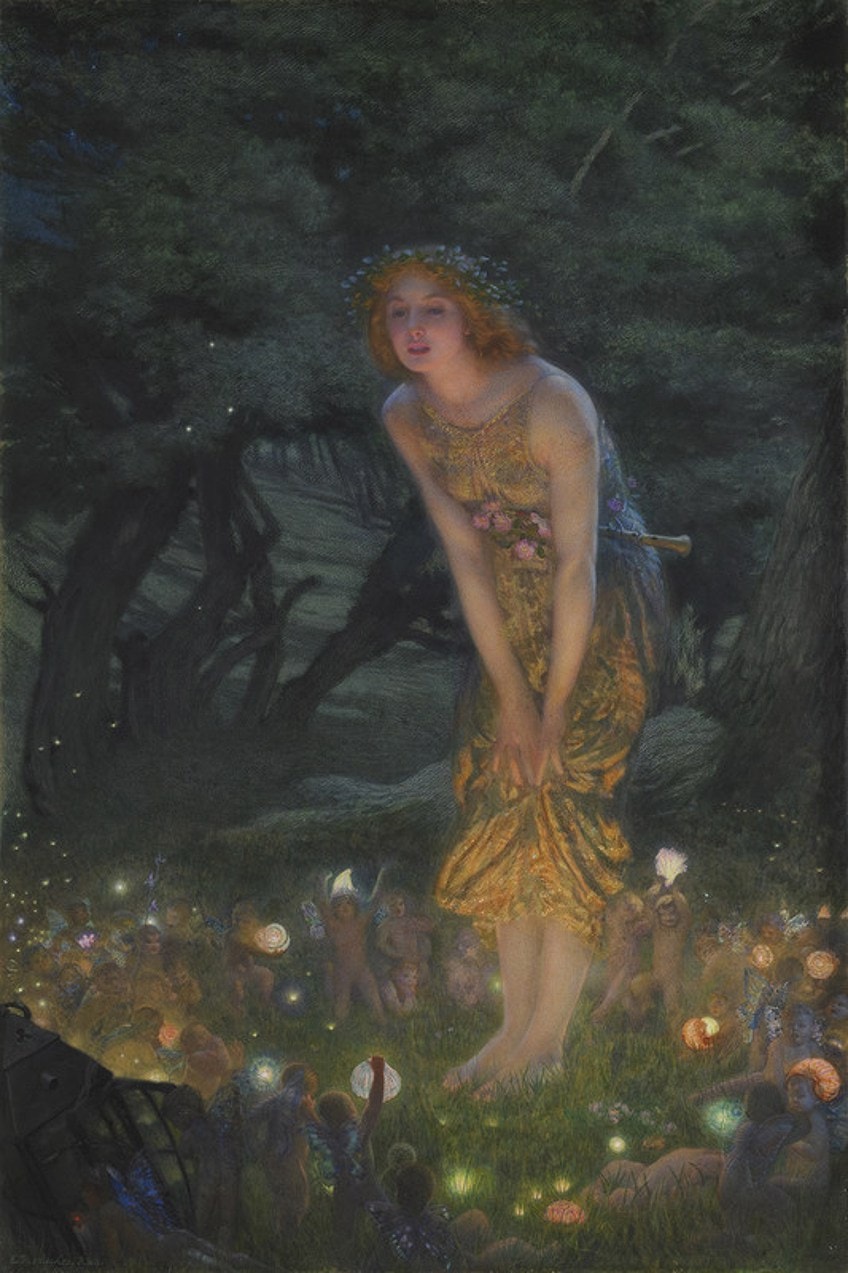 Who Was the First English Fairy Artist?

William Blake was the first British fairy artist about whom we have any information. Blake had a personality by any standard. He was an outstanding English poet who produced some of Shakespeare’s best poems. He accepted free love (very enthusiastically). He conducted psychedelic experiments. Additionally, he witnessed fairies in his yard as well as a fairy burial! Oberon, Titania, and Puck are his three most well-known fairy paintings.

Who Was Fairy Artist Henri Fuseli?

For artist Henry Fuseli, fairies were the result of often consuming raw meat before night to make his nightmares more realistic. Fuseli also tried out pictures that were darker. Consider the 1790 painting, Bat-winged puck, which is the earliest instance in history of a fairy being shown as having wings. Fuseli became obsessed with Puck and created some of the best-ever portrayals of Robin Goodfellow.