by artincontext
in Human Anatomy Drawing 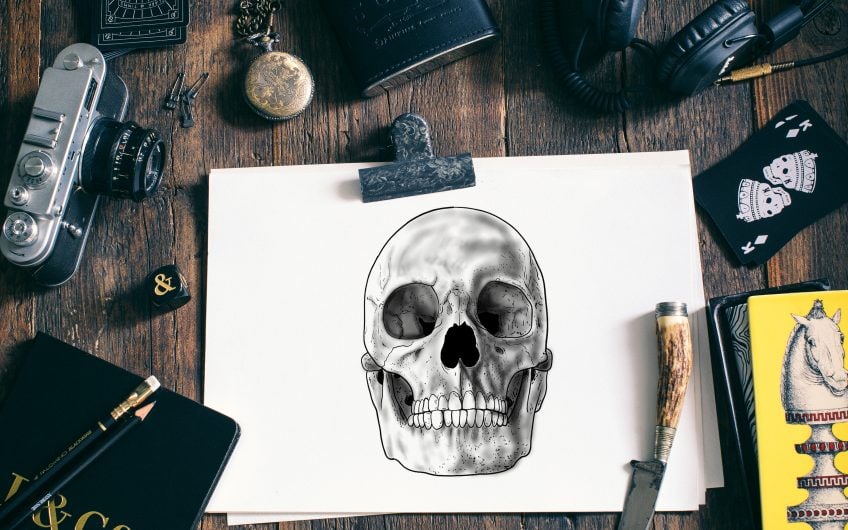 The human skull carries a lot of meaning and symbolism that can elevate the depth of your artwork, allowing the viewer their own interpretation of your expression. Not only this, but the skull is also the foundation for being able to draw a human head. If you struggled with this in the past, then this tutorial will instruct you on human skull drawing with realistic detail to aid you on your way to greatness. These basics can be played around with and can be meshed in with your choice of art style.

For many reasons, human skull drawings and skull sketches have been the muse for many artists. It might seem strange to you, but the skull holds much symbolism and attracts those that least expect it. It can teach you a lot about shading, where you can create contours and contrast without drawing actual lines. By the time you have completed your work, you will deeply appreciate the subject matter for the amount of time your eyes have looked over its surface for any missing details.

Improvement in Your Drawing Skills

The human skull is hidden underneath our muscle tissue and our skin. This is what gives each person’s head its shape and depth. By studying and rendering what you see from the bone, you will receive an inside look into the similarities and differences of each human head. You will notice how different our faces look when they are not covered in skin, and the act of drawing the skull can feel almost primal. Practicing how to draw the human skull will greatly increase your skills in art and drawing.

Cheekbones are a complicated topic and the shading of someone’s gaunt face is not any easier. A skull outline might be the answer to your tribulations. Wasting your art resources is no longer going to be a problem because you will be more than satisfied with the skill you have learned by practicing skull drawing.

The human skull is not always symbolized to represent something morbid. On the contrary, it can represent the appreciation of life. It can be a representation of humans being vain, as we see in Charles Allan Gilbert’s depiction of a woman gazing at her reflection in the mirror, where the image and reflection is actually a skull. It could also mean transformation, or transitioning from life into the next realm, whatever it may be. Mexicans favor this belief in their holiday Dias de Los Muertos, where everyone joyously celebrates and remembers the dead. Skull drawings are, however, more typically used to represent death – humans are mortal after all. 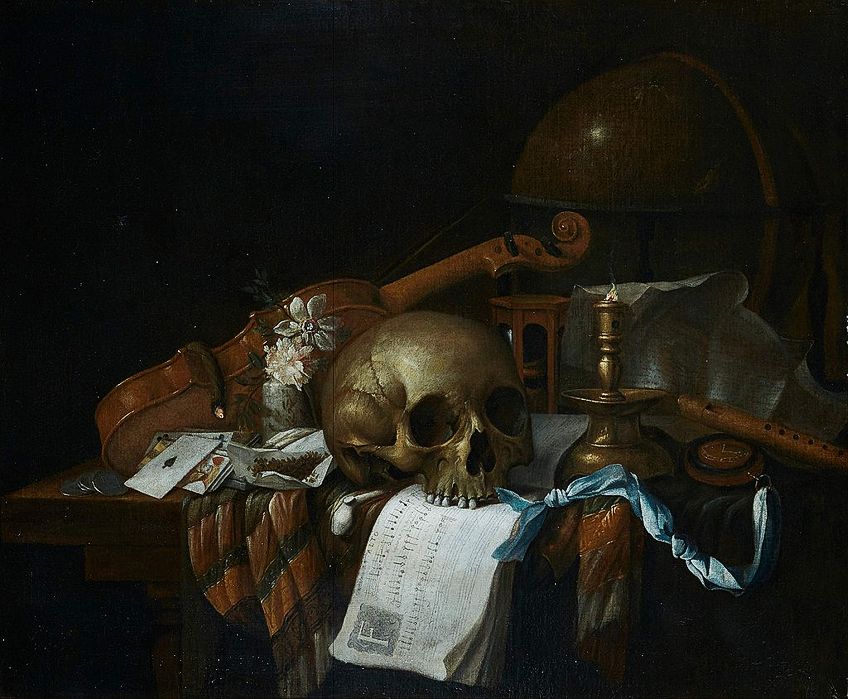 The 17th century saw humanity and the art world through the Vanitas period. Vanitas means “vain” in Latin. It was based on the appreciation for still-art, inanimate objects staged in a certain way. It usually carried symbolism chosen by the artist. It was most popular in the Netherlands where the artists began to question life, death, and mortality. Most of these paintings and drawings had a depiction of a skull somewhere either in plain sight, or hidden, leaving a surprise for the eager eyes who spotted it.

A Note on Proportions

We are all quite unique in personality and physique. The contours of our faces and our heads will not be the same as the person to your right or your left. Your facial expressions are defined by your personality and no one will be able to repeat the same. While this may be astoundingly true, there will always be the basics to the shape of a human head.

Learning to draw a skull outline will help you with your accuracy. You can add someone’s personality once you have their silhouette. In order to begin a skull sketch, you must first take a good, long look at a skull’s face from the front. You might notice that it has the shape of an egg pointed downwards – rounded at the top and narrow at the bottom. If you plan on drawing an eye inside the skull socket, then it is a good idea to remember that muscles and flesh take up more space. Basically, your eye will seem much smaller than the actual socket. It is important to take note of the following proportions: 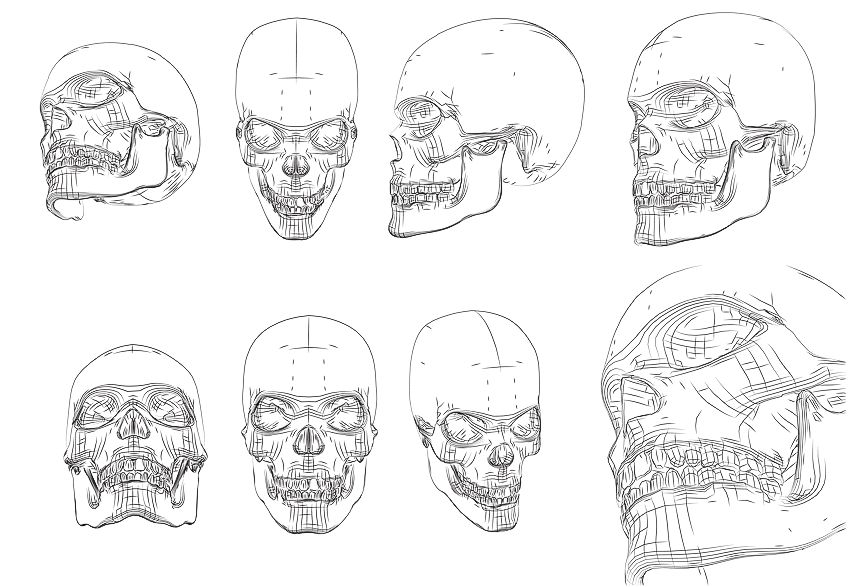 Instructions on How to Draw a Skull

Proportions are now in the bag! Your artwork when drawing human faces will no longer look like a depiction of an alien. The next thing to work on is drawing the actual skull. Below, we will provide a list of recommended materials as a well as step-by-step instructions on how to draw a skull realistically.

First, you need to draw the shape of an oval – as we have mentioned, the human head is similar to that of an egg shape pointed downwards. Find the center of this. This step requires very faint lines so that they are not visible at the end. 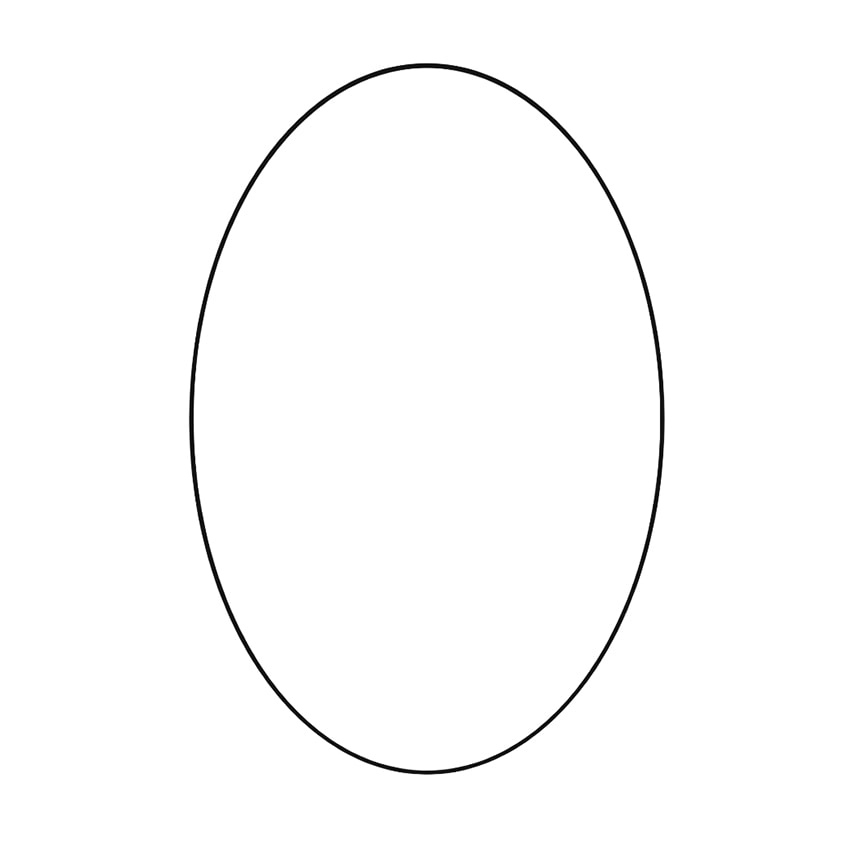 Step 2: Getting the Right Proportions

In order for you to put the eyes in the correct place without it seeming off-balance, you need to divide the oval up. 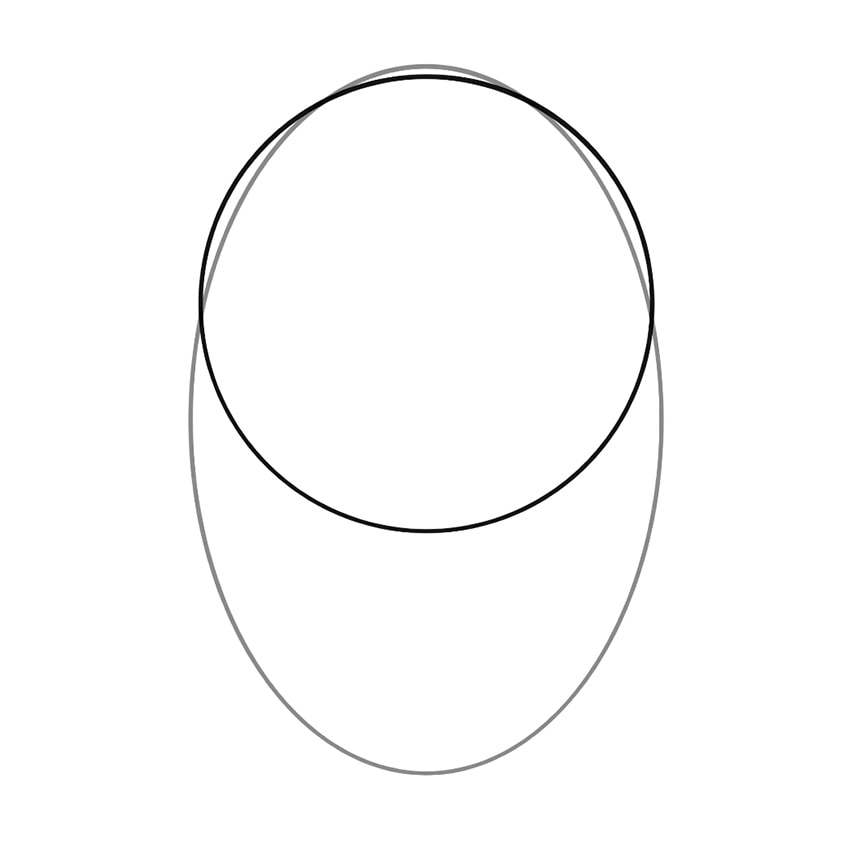 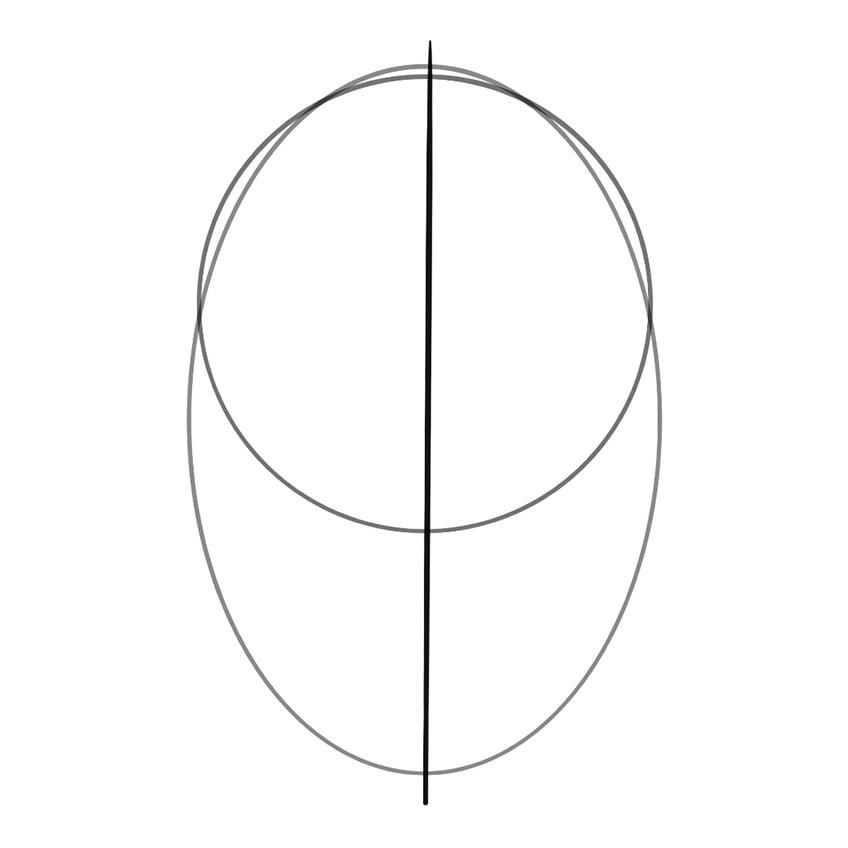 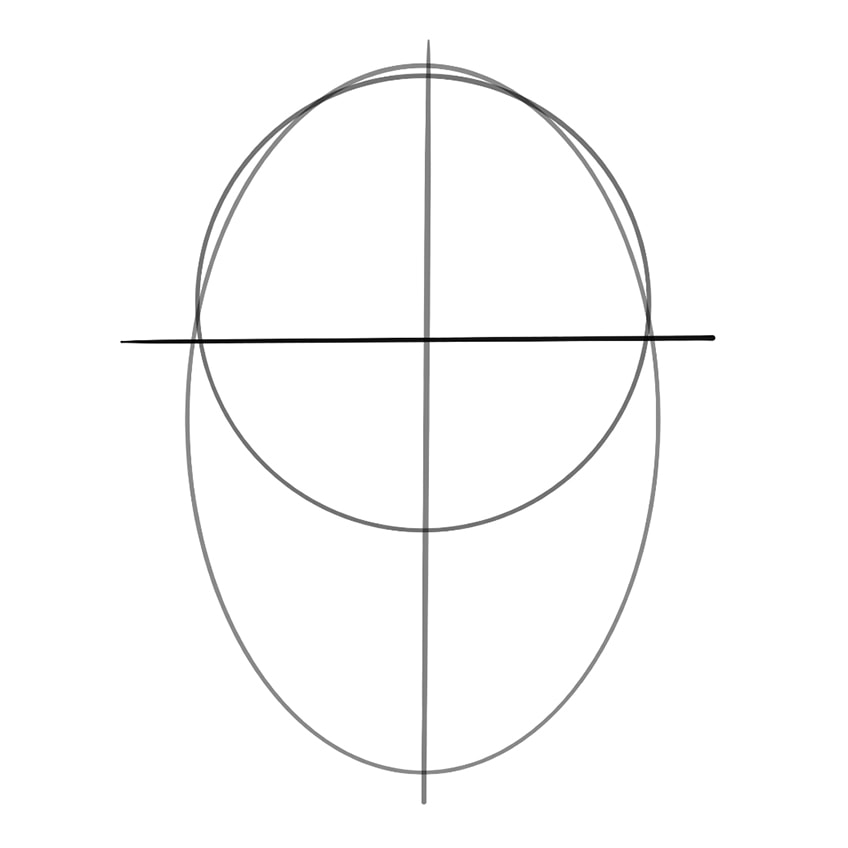 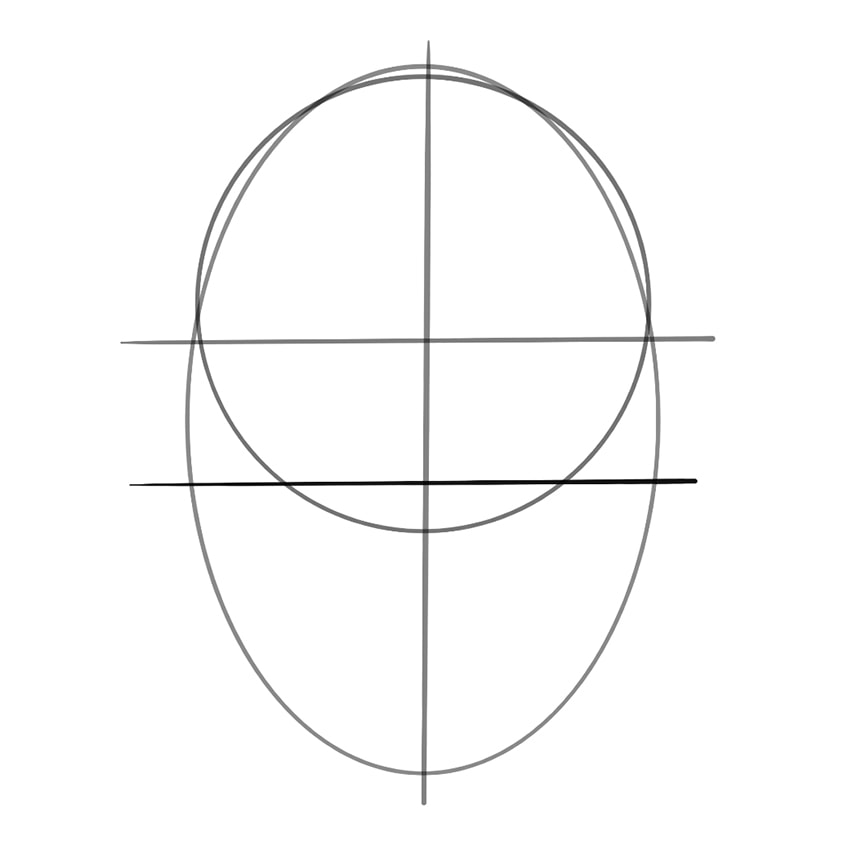 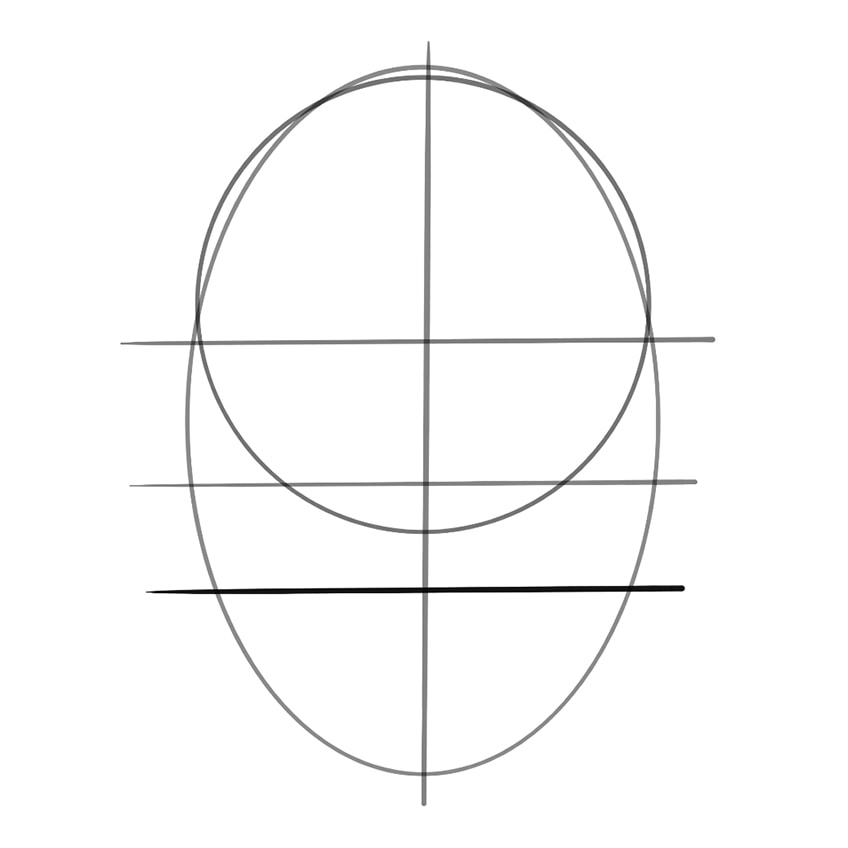 Step 3: The Nose and Eyes

Where would we be without our eyes and nose? Nobody knows! Our next adventure in the art of skull drawing is the addition of your nose and eyes. 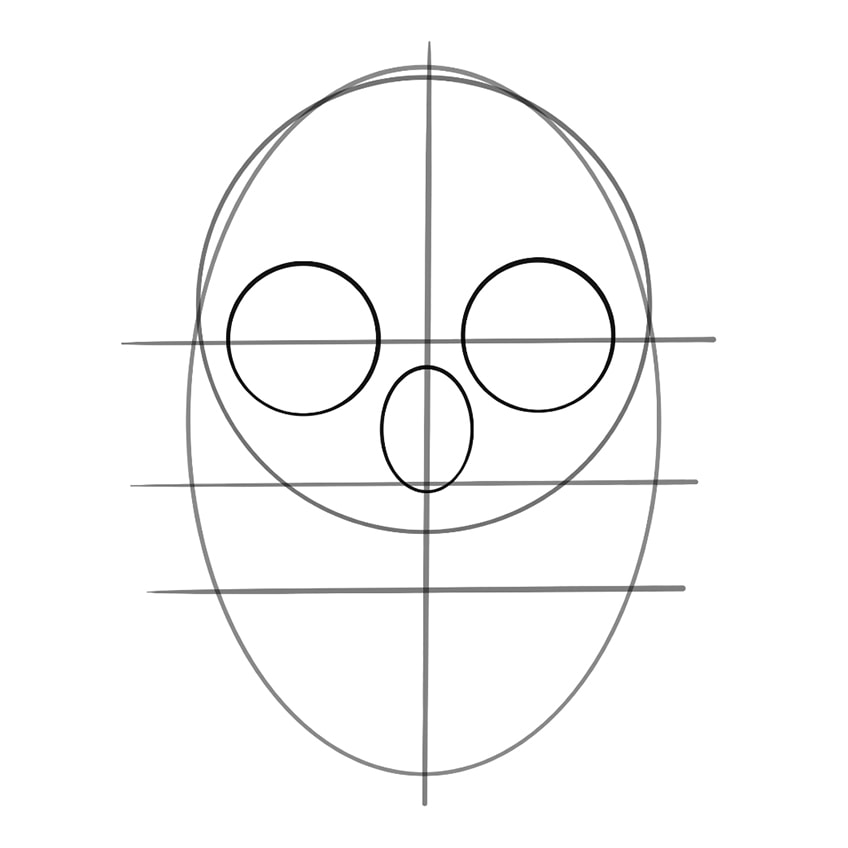 Step 4: Time for the Teeth

Always remember to make use of the horizontal and vertical lines – they are your symmetry guidelines!

If you look at what you have drawn now, it might look to someone without an artistic eye more like a kindergarten student’s attempt at drawing a snowman. This is not the end of the world, as this is what this next step will improve upon. By adding contour lines, you will start to see the image of the skull and not just the oval shape. 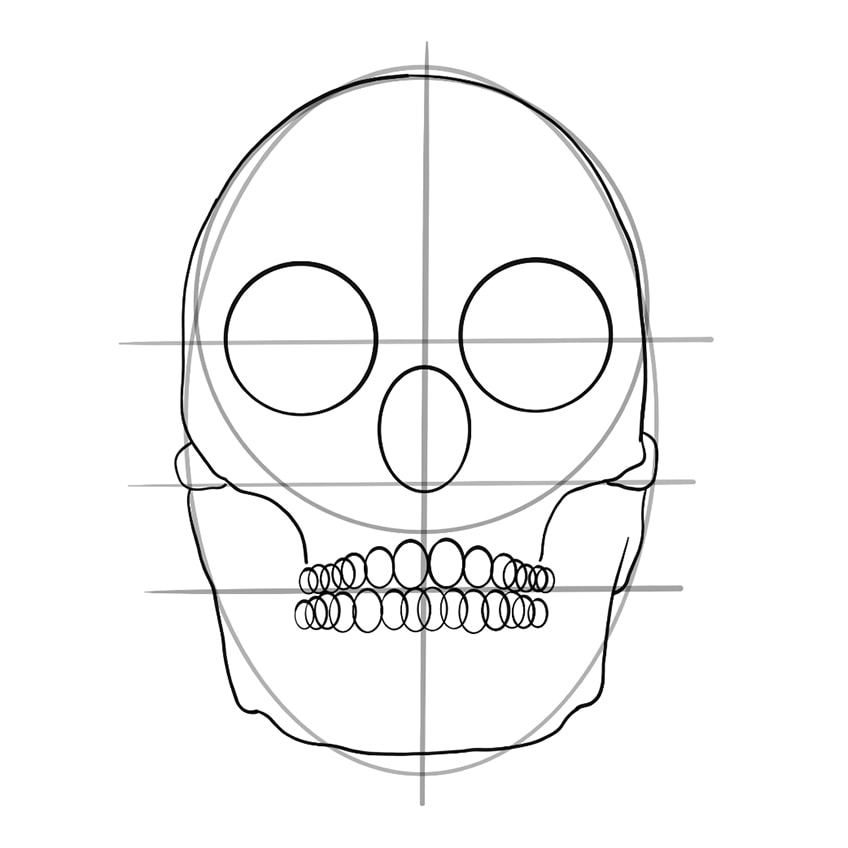 Adding all these circles may seem a tedious task and your impatience might want to have you diving right into the jawline with all its bumps and grooves. Unless you have an extreme eye for symmetry, this is the advisable route to start drawing skulls – do not skip these steps because you might end up with a skull drawing that looks like it was made out of wax and melted ever so slightly!

Symmetry is a key factor when it comes to skull drawing.

Whip out yet another and even darker pencil for this next step. This is where things become exciting and a little more tricky. Some say that beauty is in the details, and in this case, it is true. 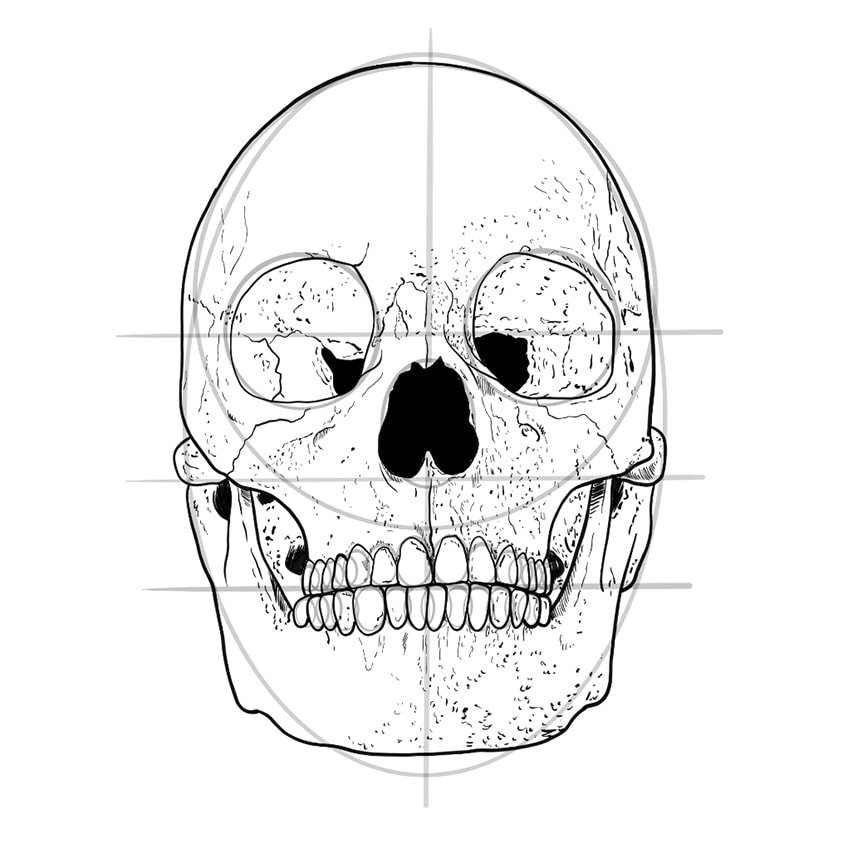 Some artists have mastered the skill of dimension and the detail of shading. So much so that it looks like a 3D image has been printed onto paper or canvas. This next step is vital for bringing life into your drawing – ironic is it not? In order to get this right, you must make sure that you have a graphite pencil set with all the different light and dark pencils for shadows and highlights, respectively. 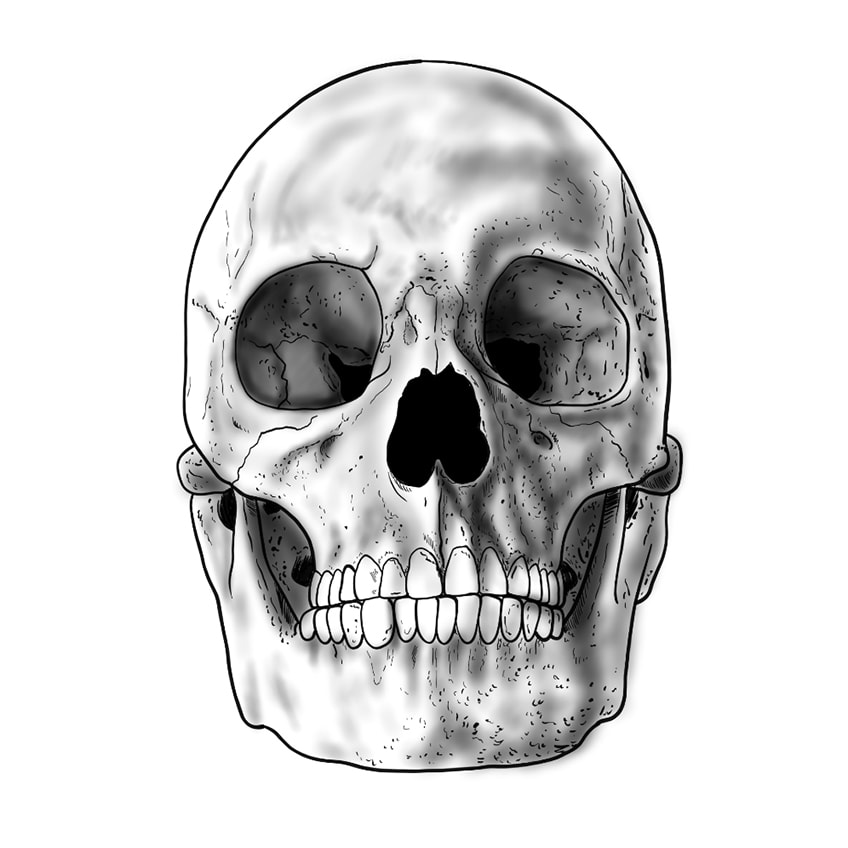 How to Draw a Skull from an Angled View

The entirety of the instructions above is based upon a head-on view of a skull. Sometimes life is not so straightforward and you might have to draw the skull from a profile perspective instead. Fear not! You will not have to relearn everything we just taught you, because the basic foundation lines remain the same. The only addition is that of the foreshortening technique.

What is foreshortening, you say? Well, it is the ability to add depth or dimension to your artwork. Without it, your piece will lack realism. Aspects of the human skull in subjects that are seemingly behind the skull, the opposing profile, will need to be made smaller and filled with much darker shading due to the light shining on the profile facing you. The aspects that seem to be at the front of the drawing, the side of the profile facing the viewer, must be larger and have less shading so that it seems as though the light is shining on it. 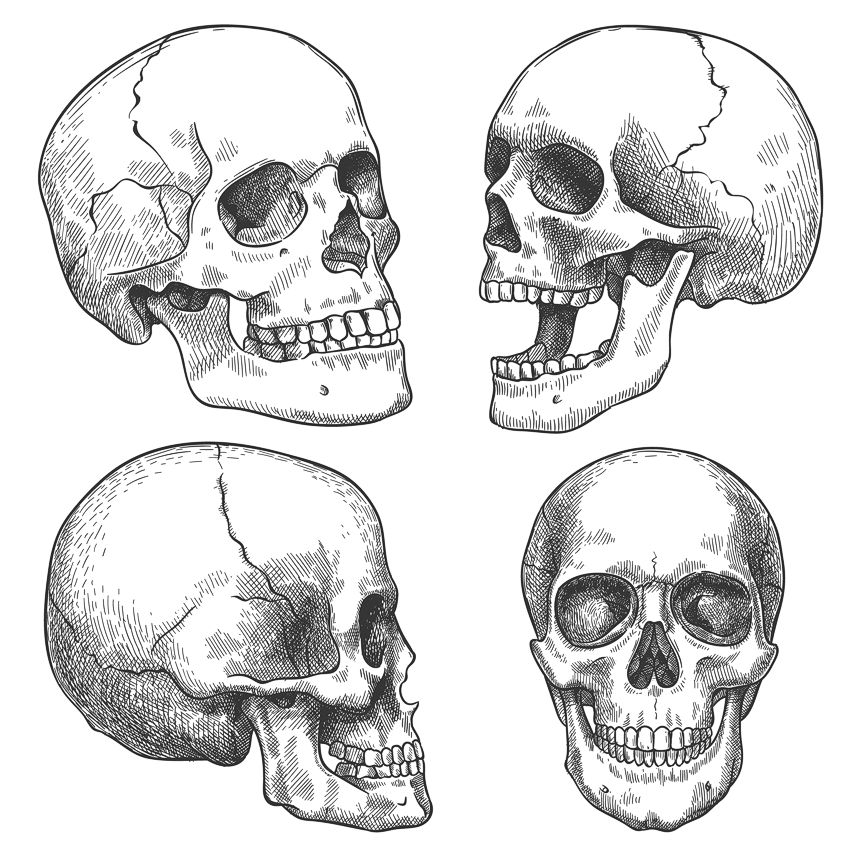 Top Tips for Drawing a Skull 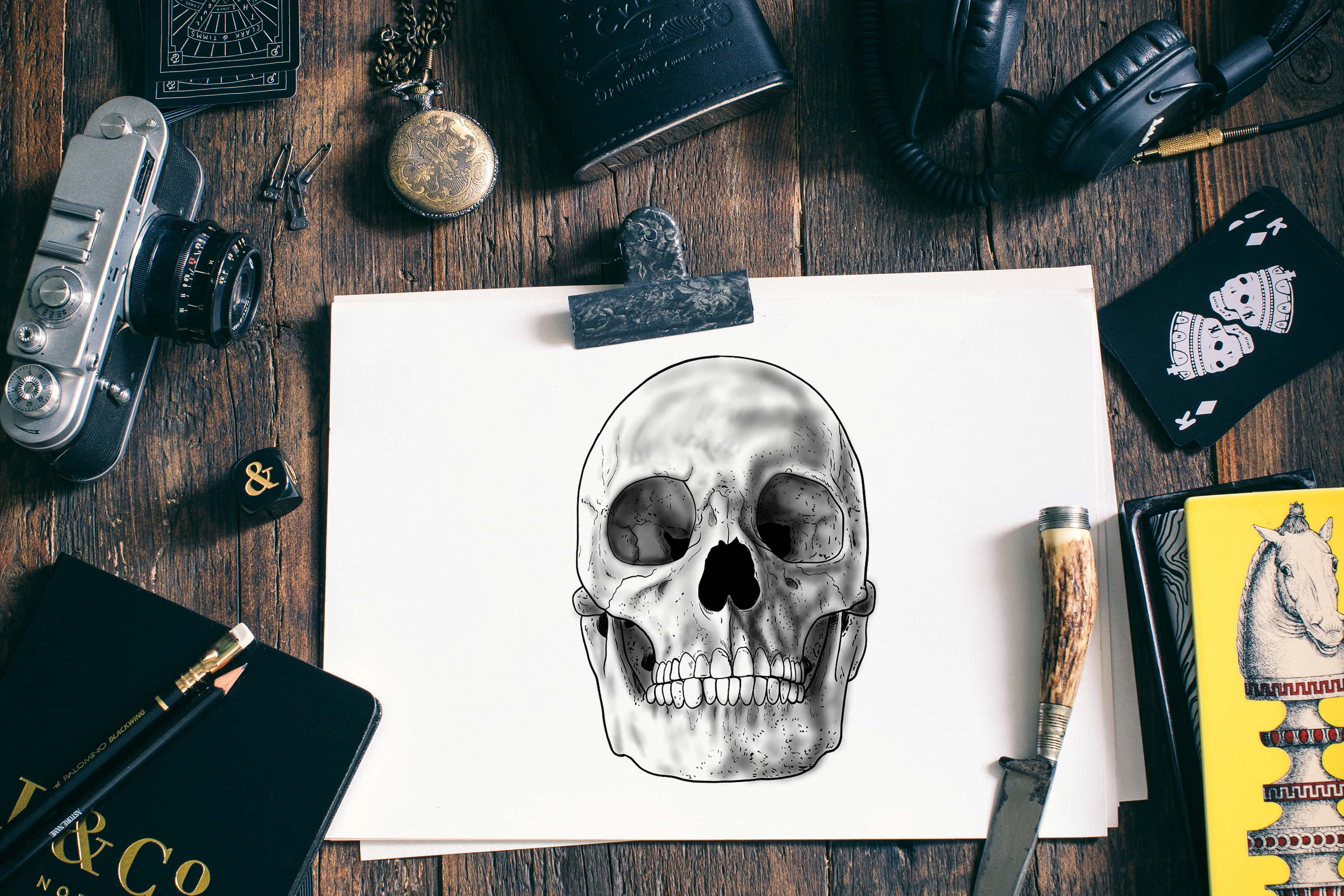 We’ve created a Google web story for this tutorial

How Difficult Is Drawing a Skull?

It is undeniable that learning how to draw a skull accurately, and with realistic detail, will take some time, patience, and a whole lot of love. It is, however, made much simpler if you follow the tutorial you have just read. All of those shapes are not a waste of time if you are wanting a life-like skull by the end of your sketch.

What Do Skull Drawings Symbolize in Art?

Skulls can have different meanings to many different people. It has been used to symbolize the remembrance of our human mortality and that our time here on this earth is not permanent. It has also been used to represent transformation and the transition between life and death, or into the next “realm”. 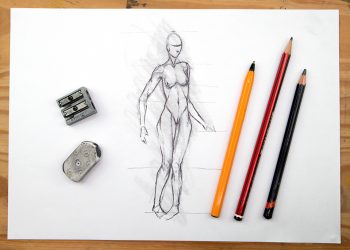 How to Draw a Female Body – Realistic Female Life Drawing 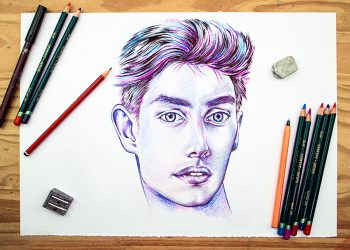 How to Draw a Boy – Easy Portrait Drawing Guide